With Ella Viviani’s victory at Saturday’s Memorial Marco Pantani in Pantani’s hometown of Cesenatico, it seems a good time to remember the late great climber. Nick O’Brien recalls the last time we saw the legend on his stomping grounds – in the mountains of the Giro. It was May, 2003.

This article originally appeared on PEZ in April of 2008.

Say what you like about Marco Pantani: he was a fantastic bike rider when the road went uphill, he was a true ‘great’ and still leaves a lasting impression on our sport and all those that witnessed his exploits. One such occasion that I was privileged to witness ‘alla strada’ as they say in Italy, was prophetically the last time Pantani climbed a mountain in his beloved Giro and sadly the last time anyone saw a true “acceleration” from il Pirata.

Back in early 2003 following the announcement of the Giro route I could hardly contain my excitement that stage 19 was going to finish so close to where I live, on a climb I know well, the ‘Cascata del Toce.’ Although not well known outside of the region, this beautiful alpine climb that wiggles its way up a small valley in the Piedmontese Alps finishing close to the Swiss border, was going to provide a superb finale to the race, as this was “last chance” saloon for the GC boys coming only 2 days before the Milan finish – this was going to be where the Giro winner was confirmed. 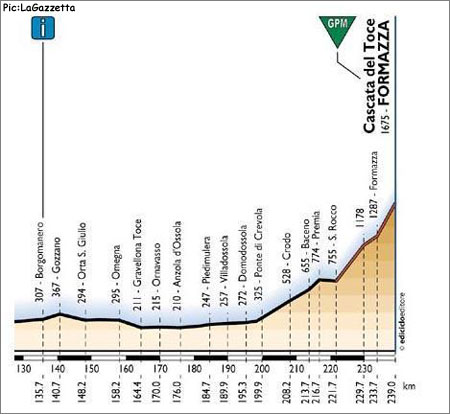 Come May as the race wound its way around the boot, Gilberto Simoni (then riding for Saeco, red train and all) was dominating and as they got to ‘our’ stage he led Garzelli by around 8 minutes with Pantani outside the top ten looking like a rider sadly past his sell by date (despite a defiant attack on the Zoncolan stage, that gave all his fans a glimpse of the old magic). 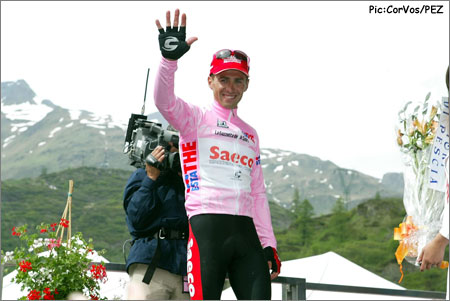 Simoni was days and days ahead of Garzelli in 2nd.

The day arrived and in my eagerness I was on my way up the Ossola valley early in the morning riding past pink villages & towns all anticipating the race’s arrival later that day. The stage itself was a long one, 239km from Canelli, in the Asti region, it had a pretty flat profile until it hit the Formazzo turn around 40km out. 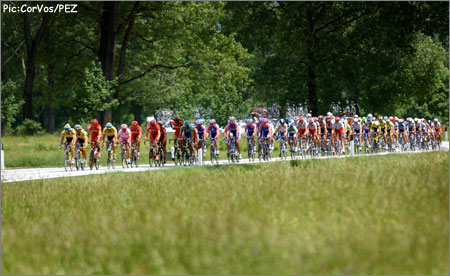 The lead up to the final climb was long and easy.

Subsequently nothing major happened on the run in (apart from friend of PEZ Maggy Backstedt grabbing points to secure the Intergiro title – if I remember correctly. Hmmm – I’ve got to get out more). 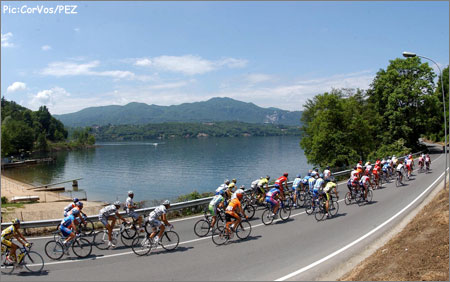 The Giro glides effortlessly past Lago d’orta, before the final big climb up to the waterfall.

So I had a leisurely ride to the base of the Formazzo valley where the road begins to wind up to the Cascate (waterfall) of the Toce river and joined in with hundreds of other locals getting to their viewing points. I had arranged to meet up with my father at the top, so slowly but surely I crawled along, the crowds getting bigger and more vocal as I got nearer. 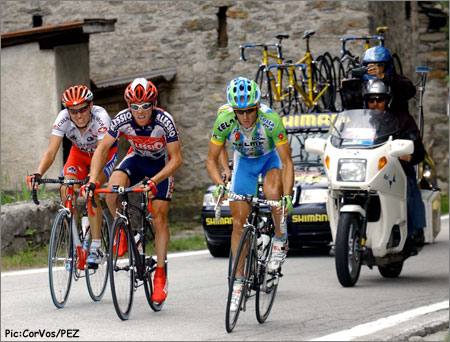 The break didn’t stand a chance on this day.

Inside the last 5km and the atmosphere was fantastic with the race still hours away – a real carnivale was taking place, so much so that the police decided to close the last Km. Now, having sweated my way up this far, I was not going to let a barrier get in my way, excuse the pun, so I ducked under only to feel the strong arm of the law grab my seat post and try and bring me to a stop.

Slightly wobbly, I managed to stay upright at the exact moment I heard a shout from the side of the road ‘Mr. O’Brieeen, Mr.O’Brieeeen!’ by coincidence the police grab had taken place in front of some neighbours from back home who were setting up their, flags & picnic. The policeman hesitated for a second, I kept pedaling, the crowd cheered and off I went, laying low as I coasted back down 5 minutes later, having just about reached the top I was now ready to watch the world’s best show me how it should be done. 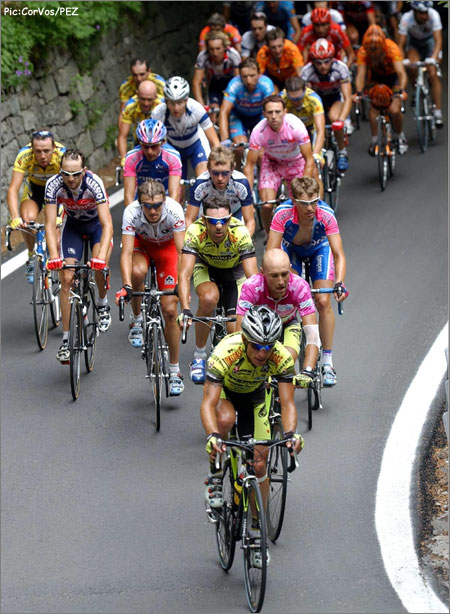 On the early slopes of the climb.

Anyway back to the race – in time honoured tradition my dad and I found our slot in the crowd with a load of slightly drunk Pantani fans with a crackly radio, about 2 km from the finish. Panini lunches were eaten, wine was drunk and the atmosphere was building. As the race began its ascent an earlier break was soon absorbed, the lead group was down to around 35 riders, all the big names. 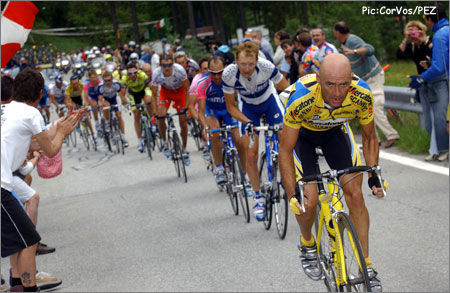 The attacks begin, and Marco is defiant amongst the elite selection on the day. Did he know this would be his last mountain climb? Only months later he met his tragic end, whatever the reasons he still remains one of our sports great names.

Suddenly the news came of an attack with around 7km to go, no it can’t be, surely not… it was, Pantani had jumped! News was sketchy, but the thought was enough, the crowd was stoked. A few minutes later it was confirmed. Pantani had a small gap! The Pink Jersey was having to bring him back, unbelievable. Go Marco! 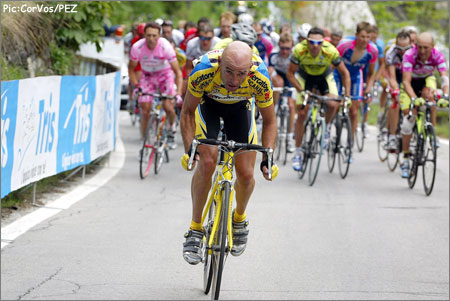 They’re all together again, no wait Pantani’s gone again, fantastic, Garzelli is struggling! Simoni is bridging, Pantani had another dig… 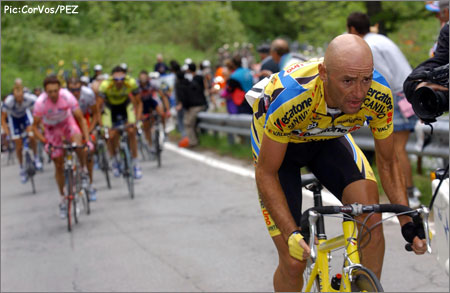 The crowd is going ballistic, the lead motorbikes push past, the fans fill in behind them immediately as we look down at the hairpin bend below – then suddenly through the masses comes the pink jersey beside Pantani in yellow, edging ahead, Pellizotti follows Frigo, a Lampre rider, the noise is deafening, the riders so focused and cool, eyes fixed, Go Marco, Go Marco…! 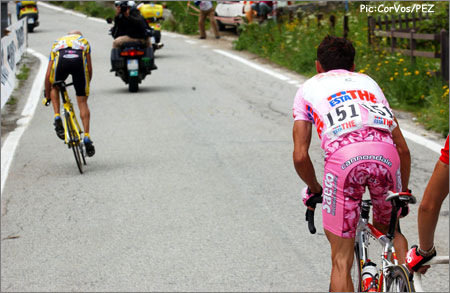 Simoni, the maglia rosa is forced to bridge up to Pantani, no ‘gifts’ in defence of his overal lead.

They’ve passed and are out of sight around the hairpins above, slower riders continue to come through, a young Cunego, Marco Velo, I spot some honorary Brits – Scott Sunderland, Wegelius, Julian Winn!… but the legend has gone, although no one knew at the time what an historic moment we had just screamed our heads off at. 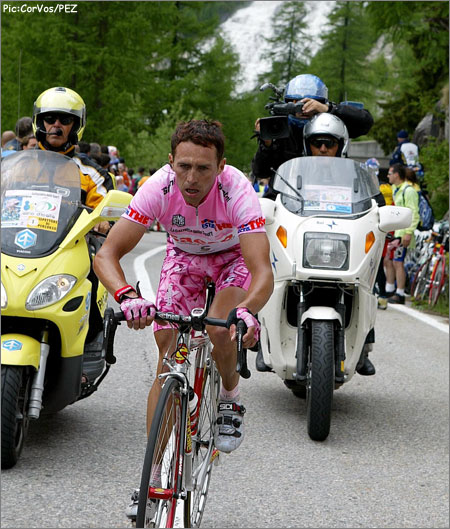 An inspired effort from Pantani was still not enough to stop the raging Simoni.

Months later we would remember a rider that even when not at his peak could ignite any race at the top level. The stage eventually resulted in a win for Simoni, ensuring his overall Giro, Pantani came in 40 seconds later in 12th, for a rider of his caliber – a non result! 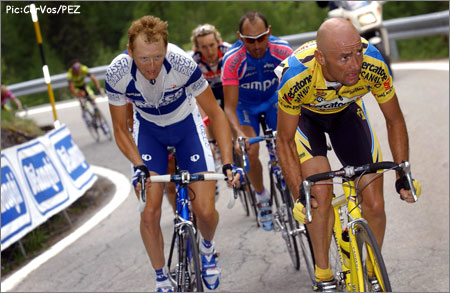 Simoni was victorious at the waterfall, but the ‘tifosi’ only wanted Pantani…

Being a dead end climb the organizers had parked all the team coaches in a small village square about 5km back down the climb, so as I rode back down I pulled in with everyone else, to await the return of the riders. As an illustration of how sport wants winners and soon forgets ex-winners I’ll always remember the huge Red Saeco coach mobbed by TV & press waiting for Simoni to get back. Whilst a little further down two small yellow ‘Mercantone Uno’ camper vans waited to greet Marco, not the most impressive team transport – but the large crowd waiting for their hero told its own story. 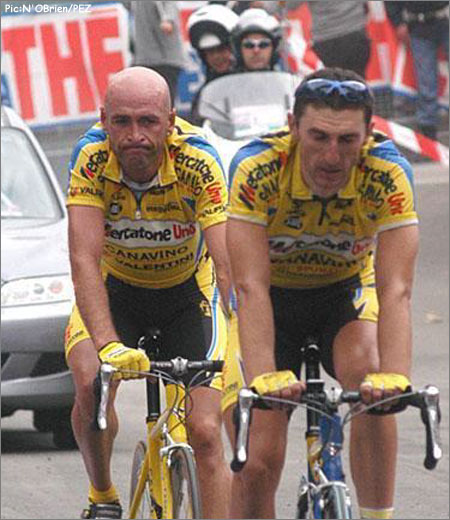 Marco tried in vain with attack after attack, a fallen hero in his eyes maybe, but still the crowds favourite as he crossed the line rather unimpressed behind team mate Cristian Gasperoni – was this a defining moment for Il Pirata.

If you want to ride this little known, but historic climb, that so far the Italians have kept to themselves, join www.GrupettoItalia.co.uk for a guided experience.