PezCycling joined 200 cycling fans, friends, and media at the recent US Bicycling Hall of Fame dinner for some great stories, great history, and to help honor some amazing people. Some of the hilights included talking with inductees Michael Aisner, Ron Skarin, Butch Martin and more… 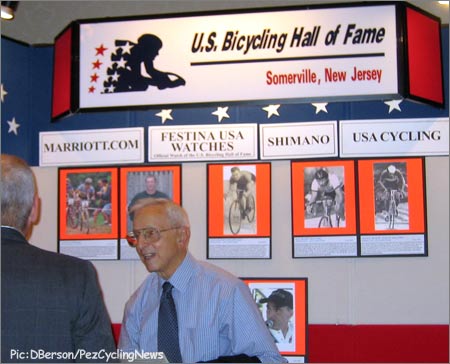 I want to be a pro and win the “Hell of the West,” said 9-yr old Teddy Kozlowski as he waited for this year’s induction ceremonies to begin. Clearly this fan of the 1985 film titled American Flyers, based on the Coors International Bicycle Classic has been influenced by the history and tradition of the sport. I wonder if young Teddy knew that the race he wants to win was promoted by Aisner. 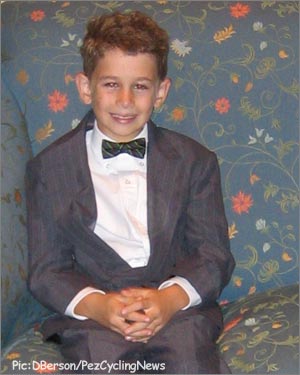 Michael Aisner was inducted into the Hall of Fame for his Contributions to the sport. When asked what it meant to be an inductee, he said that the award was a reflection of the time and various cycling projects he’s been involved with over the years. He was clearly pleased to be on hand.

Cycling Post Lance?
According to Aisner, we need to use modern marketing strategies to convert the fans created from the presence of Armstrong into long term fans. Aisner’s latest involvement with cycling was with The Race Across America (RAAM), which he said, scored cycling its largest television exposure with coverage on NBC. 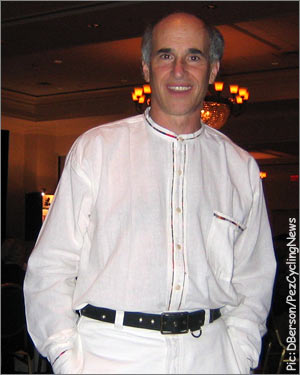 We need more races here in the U.S. and grow a greater base of young riders. We also need to find women’s cycling again said Aisner.

Well, there were plenty of young riders at the induction ceremonies. 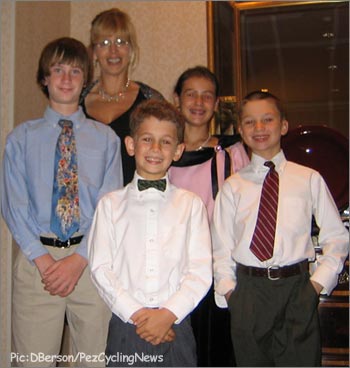 Pressed on his favorite cyclist, Aisner said Chris Horner was his current favorite because of his “flat out attitude and presence.” Horner delivers, is serious, and is a pleasure to watch on a bike, said Aisner.

Of course we had to ask about his fave cycling site, and he smartly replied he prefers PezCycling, astutely noting that we simply state things differently from the other guys, with a freshness that’s really cool. Aisner said even the name is cool. Thanks very much Michael! 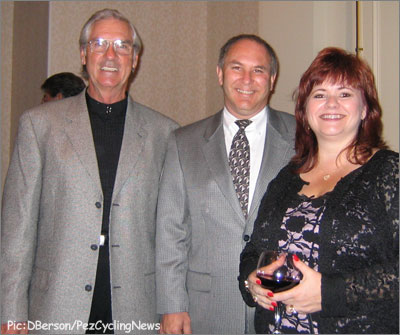 Pez caught up with Gian Simonetti of Home Depot, Ray Cipollini of Team Navigators Insurance, and Ray’s wife Laurie. Simonetti is involved with the ATD Event Center, America’s only indoor Velodrome, at the Home Depot Center in Carson, California. On loan to the ATD Event Center this past summer was memorabilia and plaques of all 90-plus U.S. Bicycling Hall of Fame inductees. Cipollini is the Business Manager of the Navigators Insurance Cycling Team. In addition to Cipollini’s duties with Navigators, Ray is one of the Directors for the Hall of fame and has been involved in cycling for 30 years. Laurie told us that Ray’s schedule is so crazy that they often only meet at airports for short periods of time although she was recently with Ray in Madrid for the World Championships.

As our wives joked about the cute Italian boys on the team, I took the opportunity to ask Cipollini about the selection process for the Hall of Fame. The Nomination committee makes its choices once we learn of qualified people, he said. According to Cipollini, the selection committee reviews the candidates and pairs them down to those who have given to cycling in some key way. Next, ballots go out and the voting is done by current living members of the Hall of Fame and certain key individuals within the cycling community, says Cipollini. The cycling community can also nominate individuals from the Hall of fame website. Cipollini said that Speedplay founder Richard Bryne, creator of the first dual-sided pedal, was chosen to induct Pierre Lallement, the holder of the first bicycle related patent. Lallement was also credited with inventing the pedal. Quite fitting for the U.S. Hall of Fame to choose Bryne to honor cycling’s past.

Ron Skarin (above) was inducted for the Modern Post 1975 Competitors Category. Skarin won 10 national titles, a Gold medal at the 1975 Pan American Games, and participated in the 1973 World Championships, the 1972 and 1976 Olympic Games. Skarin was also the USCF Director in 1979-1980 and an assistant coach at the 1984 Olympic Games in Los Angeles. Asked what it meant to be inducted into the Hall of Fame Skarin responded that “old cyclists don’t die, they just get recycled. That’s what I’m doing here.“ The double Tour of Somerville winner, along with his wife Sue and his parents mingled with the crowd telling stories of his Teledyne Titan, one of the first production titanium bicycles, and thought at the time to be the secret to his success. This reporter thinks his positive attitude was his real secret. “Any race you’ll have ridden you beat those that don’t have the guts to show up and race,” said Skarin.

Shimano’s own Wayne Stetina, also a 1999 Hall of Fame Inductee, introduced Skarin, but admitted he didn’t vote for him. The two friends and former roommates at times during their careers were also fierce competitors, having traded national titles several years in a row. Stetina went on to say how happy he was to see his friend inducted. Skarin’s first race was a ten-mile time trial and he placed in the top ten. I thought this was really great, said Skarin. “Cycling provided focus for my life. It helped me form an identity.”

Along with Skarin’s track and road accomplishments, he got involved in the sport of Human Powered Vehicle racing and is the current World Record Hour holder on a Tandem HPV. (he went 46 mph—damm that’s fast) Skarin was also instrumental in developing hard shell helmets with Bell. “I saw the value of protecting what’s between my ears” said Skarin. After retiring from cycling, Skarin wanted to promote the sport for young cyclists. According to Skarin this can be done by always including public and junior races. Cycling is a sport, a story of hope, makes it fun he added. Much like his father supporting him; Skarin is out supporting his son Matt at junior races and doing a bit of racing himself. The two recently completed a stage race together.

Skarin said that winning the heart of his wife Sue was very special. We often ride tandems together and Sue feels more intimate with me on the bike than on anything else, said Ron. It was a cute moment and the room laughed with Ron.

Looking distinguished in a charcoal grey suit and black tie, Oliver “Butch” Martin was Inducted into the Hall of Fame for the 1945-1975 competitors category. 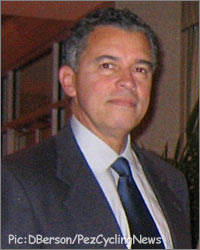 Butch Martin, 59, was a member of the 1964 and 1968 Olympic Team. He competed in the 4000 meter Pursuit Team in 1964 and the 100 K Team Time Trial in 1968. He was also part of the 1971 Pan American Team, having competed in the Team Time Trial. “When I was a rider I understood I had to take orders”, said Martin. Martin expected the same from his athletes. Once he was given the chance to coach, he proved his skill with George Mount’s 6th place result in the Road Race during the 1976 Olympics. Martin went on to become the Race Director for the Tour of the Americas and the 1990 U.S. National Road Championships, and the 1993 Director of the West Virginia Mountain Classic. 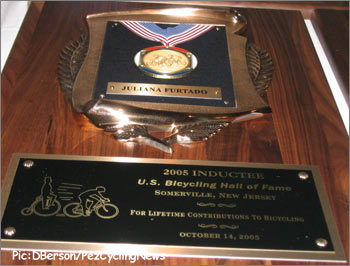 Not forgetting our dirt-riding cousins, two time-World Champion, Juliana Furtado was inducted into the Mountain Bike Category. Furtado started with a U.S. Road title in 1989 but switched to mountain biking and won the 1990 World Championships in Cross Country. In 1992 she won the Downhill title. Furtado won the National Cross-Country Championships 1991-1995 and was the World Cup Senior Champion 1993-1995. The 6-time National team member also won a Silver medal at the 1995 Pan Am Games in Cross-Country. Furtado graduated the from the University of Colorado in 1991 and currently works for Santa Cruz Bicycles in Marketing.

More information on the inductees and the U.S. Bicycling Hall of Fame can be found at www.usbhof.com