Leafing through the entertaining pages of “Blazing Saddles: The Cruel and Unusual History of the Tour de France” one is struck by the tone of the book, released just in time for this year’s Tour. Instead of the usual paeans of praise to the great athletes of cycling history, author Matt Rendell has instead emphasized that the glorious Tour de France, one of the world’s great sporting events, is “[a] fine spectacle of life-threatening exertion, bare-faced cheating, roadside sabotage, ludicrous clothing, extreme intimate discomfort and grown men at the absolute end of their tethers…”

“Hell, there are no rules here. We are trying to accomplish something.”
– Thomas Alva Edison 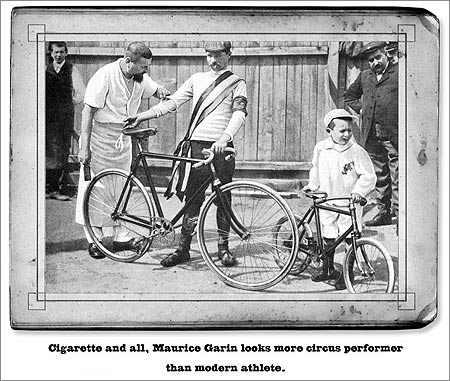 At the pinnacle of the gang of eccentrics who populate this volume must stand the founder of the Tour, Henri Desgrange. Clearly a man who loved to give orders, M. Desgrange had a vision of the Tour as the ultimate test of strength and courage and dogged manliness. He once said that the ideal Tour winner would be the sole survivor. To realize this goal, the early Tours were insanely difficult. With staggering stage lengths over terrible roads and often started in the middle of the night, the Tour de France attracted some Very Tough Competitors, men not mollycoddled by technology. Desgrange objected to freewheels (“Are our races seriously threatened with decadence by the freewheel? Will the Tour de France be undermined by this infernal invention?”) and although eventually relenting on that he did prevent racers from using variable gearing until 1937, some 15 years after cycletourists began happily shifting their way up the mountains to greet their heroes en route. 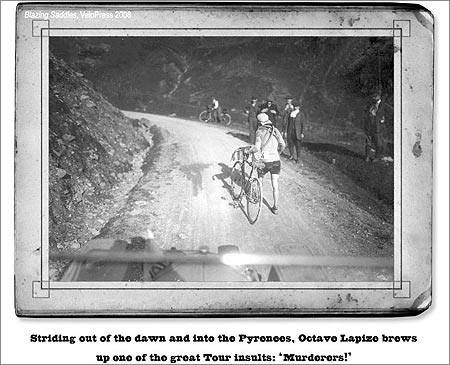 Desgrange, as the inventor of the first great national tour (and still the greatest) had to find his way as he went. The recent exclusion of Astana, seemingly based on a change-of-rules-on-the-fly, is in the great tradition of the Tour. Desgrange first prevented riders from working together, then he allowed it; he accepted trade teams and then banned them for national, or even regional ones; he used a time-elapsed system for determining the winner; then he had a points system so complex nobody knew where they stood until a day after the stage was over. He was angry the riders hadn’t tried hard enough, so he instituted a Tour that was full of team time trials in 1927, a system that Australian Hubert Opperman called “a crime that should never have been perpetrated on the roads of France.” Desgranges soon gave this idea up, but then reverted to only allowing solo riders rather than teams. For a short time. Then he changed the rules again. And again. But there was method in this madness as the popularity of the Tour went from strength to strength. 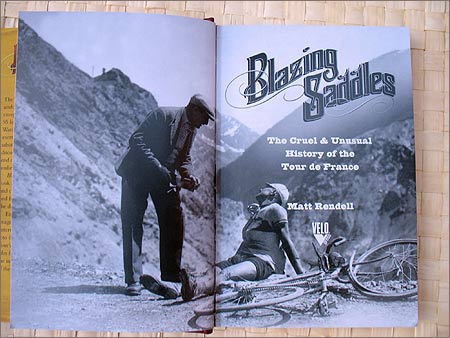 Of course, the response of the riders, who were, as noted, Very Tough Men, to all these rules was to cheat. As the author notes: “Frame builders, component manufacturers and the riders themselves have always dreamed of weightlessness, so it’s hardly surprising some of the latter have tended to dispense with the excess baggage of a conscience.” In 1904, there was widespread cheating, the mildest version of which was drafting (against the rules) and the most extreme was getting a lift in a car. Some riders had their supporters dump tacks in the road to slow their competitors. And occasionally it seemed that a bicycle race would break out in the middle of a fistfight between riders and “fans.” Desgrange thought this would be the last Tour de France, but on it went. Later editions featured even better cheating: in 1906, two competitors hopped on a train. Starting in 1910 real mountains were added, although Desgrange’s scouts were somewhat negligent about whether there were actual roads over the so-called passes or not. 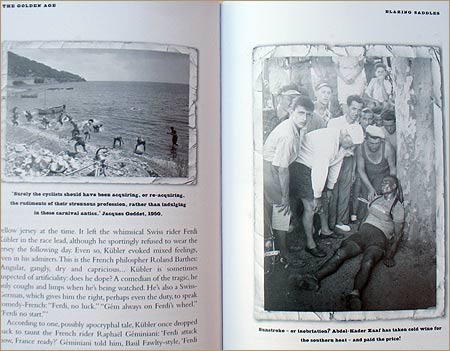 The Tour was dominated by Belgians in its early years but there was wide range of colourful characters–Eugиne Christophe being the first to wear the Yellow Jersey in 1919. He apparently complained about it as spectators laughed at him for looking like a canary. This is the same legendary Christophe who had to drag his bike off to a blacksmith’s to weld up a new fork not once but twice. The third time he broke a fork, in 1922, he quit on the descent of the Galibier. Interestingly, he was deeply opposed to doping and decades later furiously reproached another old Tour rider who admitted to drinking some champagne before each stage as a cheat. 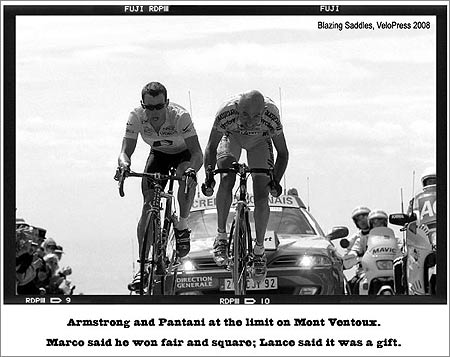 Other riders were equally as unlucky as Eugиne Christophe, although Raymond Poulidor, who never got to wear the Yellow Jersey, must surely be in a class by himself. Reading the book’s accounts of his various misfortunes, you simply have to laugh at time because it seems to so unbelievable. Other events, such as Tom Simpson’s collapse on Mt. Ventoux, bring the dangers of doping front and centre, and Matt Rendell zeroes in on this element of the Tour into the modern era. How about the 1968 race, nicknamed by organizers as “the Tour of Good Health?” It sure didn’t stop doping and Mr. Rendell gleefully catalogues all the chemical disasters. And for more fun, check out his Appendix on statistics, which shows that nobody seems to know the actual distance of each Tour. 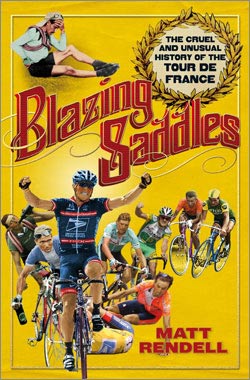 The book generally covers two Tours briefly per chapter and is best taken in small doses, like a particularly ripe blue cheese. Much of the information contained in it can, in truth, be found in other histories of the Tour. What sets “Blazing Saddles” apart is its unwillingness to worship at the Tour de France altar and Matt Rendell’s enthusiasm to hold up elements that are ridiculous, unsporting or even unsavoury to the light. As the 95th Tour de France is underway, read this book, enjoy its often hilarious photos (I loved Renй Pottier’s “milkmaid cap”) and ponder this rich event that mixes so much of the human condition, for better and for worse, into three immortal weeks.

The reviewer: Leslie Reissner, while riding through France in 1974, consumed a semi-warm bottle of semi-sweet champagne (costing 48ў) by the roadside and has never doped since. When not cycling in search of a really good bakery, he can be found at www.tindonkey.com