Another hot ticket at Interbike this year was the launch of Scott Coady’s (The Tour, Baby!) latest filmed adventure – “Cobbles, Baby!” Scott’s growing legions of fans will no doubt be impressed, as we join Scott for a wild ride chasing the 2004 Paris-Roubaix in his now trade-mark style.

If any of you were lucky enough to witness filmmaker Scott Coady’s “The Tour Baby!” movie from a couple years back, you’ll have an idea of what the swashbuckling do-it-yourselfer is up to with his latest film “Cobbles, Baby!” And though certain aspects are the same – his avant garde style of cinematography (mostly hand held and scored by unknown bands) and humorous nonchalance takes this new venture by the ‘fan’s fan’ to new heights. 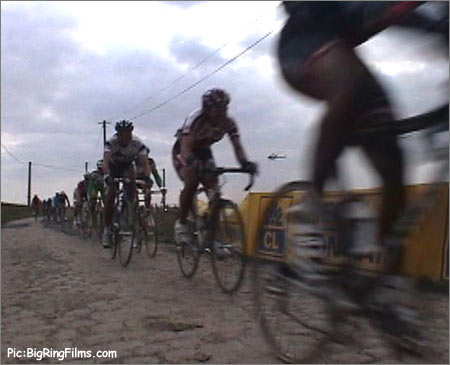 You’ll get a fan’s eye-view of the Queen of the Classics as only Scott Coady can offer.

“Cobbles Baby!” (Big Ring Films, Sept 2006) chronicles Scott as he takes the viewer on a wild ride, up close and personal, chasing the biggest one day classic there is – Paris-Roubaix 2004, The Hell of The North. As with his first film the cinematography is up close, personal, and a little bumpy at times, lending a down home feel to the flick that lets you easily imagine yourself right in the middle of the action. Listening only to the sound at some points, I could easily imagine standing on a dirt path along one of the famed cobbled sections, and I think I actually smelled the dirt. In this film he has some help in parts as someone else in his crew mans the camera to allow Scott a little more free reign. 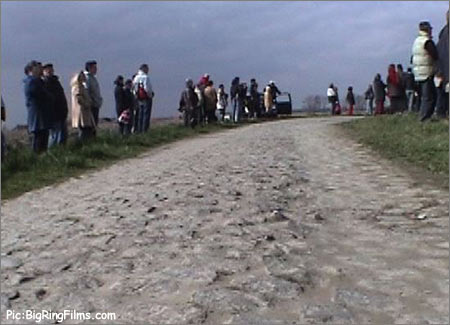 You don’t just watch the pave – you ‘feel’ the pave.

Pardon-moi, Could You Pass The Soap?
The in-your-face swagger and style of Coady’s filmmaking is highlighted at certain sections, not the least of which being the scene where Coady is allowed to Tour the famous showers of Roubaix, pointing out previous winners names on the placards on each stall with a sense of awe cycling purists are sure to appreciate. His giddiness and love of the sport are unequaled as he gains clearance to actually take a shower! While announcing this fact to the viewer, one would think the camera would fade as Scott rips his shirt off. Wrong. The camera rolls as Scott strips down to all his birthday glory and jumps under the water in a stall, laughing and cackling all the way. Thank goodness for digital pixilation and Scott’s judicious use of said effect. The film is unparalleled with it’s “up close and personal” style, but hey, no one needs to see Coady naked except his lovely wife!

“The Tour Baby!” (read the PEZ-review here.) was a cult hit in the cycling crowd, and its charm laid in the fact that Coady schmoozed his way into innumerable ‘backstage, vip pass only’ situations the rest of us could only imagine. There, he showed up with a camera, a bike, a rented van, and no real plan in place. The wild journey that ensued exceeded his wildest dreams, and the film was quickly lodged into the Lance Armstrong Foundation’s fundraising juggernaut, raising over $160,000 for the fight against cancer. Here, Scott has the contacts to get himself up close to some stars of the cycling world, but it still has many “johnny on the spot” moments. 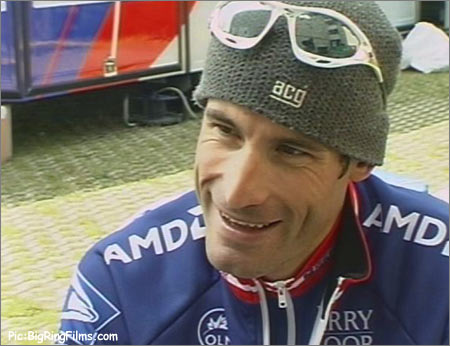 Sure Scott gets up close with George Hincapie – but he also gets George’s dad into the mix.

An Irishman Walks Into A Pub…
This film lacks some of the spontaneity that his first did, but this time he’s got better access to the US Postal team, allowing up close access to one of Paris Roubaix perennial favorites, George Hincapie. But, the trademark Coady “dumb luck” shows once more as in one poorly lit scene, Scott finds himself drinking in a pub with Phil Liggett and Paul Sherwin. The scene is driven higher still when Sean Kelly wanders in for a pint. Not to be missed. 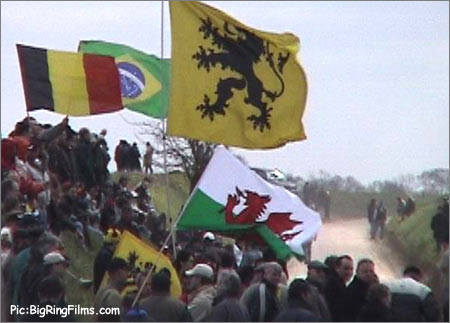 The key feature to this film is its charm. Coady’s passion is omnipresent as he takes the reins on another wild jaunt through the French countryside rubbing shoulders with the aforementioned names of Hincapie, Liggett, Sherwin and Kelly. Other bits include mini-interviews (or, more exactly “exchanges”) with US Postal mechanics and the estimable Freddy Vianne. 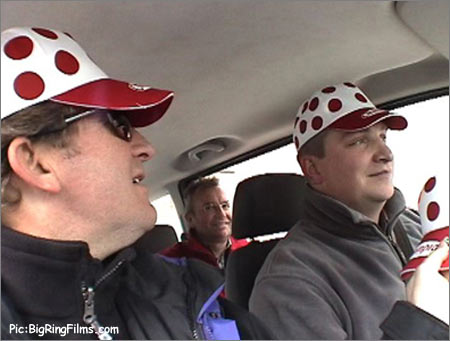 You can’t beat that ‘hand-held’ point of view for realism.

The film also adds some cool bonus features, like a tour through the city of Brugge which hosts the Tour of Flanders start, a visit to D-day’s Omaha Beach, Johan Museeuw’s last race, and a tour of the Cycling Center in Belgium, where aspiring young racers can lodge in for a taste of hardcore Flemish racing, and a few other tidbits.

And also different this time is Coady’s cause, other than the enjoyment of the viewer. This time around Scott has offered his film to help bolster the efforts of Davis Phinney’s noble cause to fight Parkinsons Disease. A dollar from every film will go to help end the scourge of this disease.

So, don’t delay, get yourself a copy of this film. Cobbles Baby! is the first film since “A Sunday In Hell” to bring Paris Roubaix to life and show it for what truly is, one of the most extreme events in professional sports. Cobbles Baby! is rough and ramshackle, and worthy of several viewings! 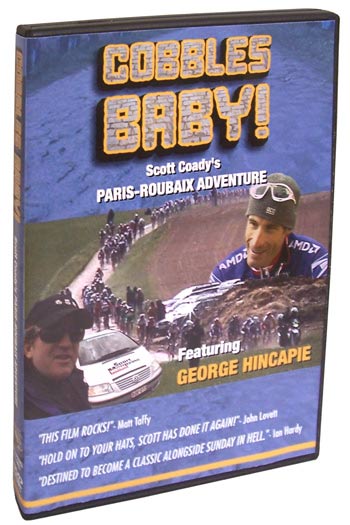