Heroes of the Postwar Era 1946-1967 – Two summers ago, while sitting in a tiny hotel room the evening before I was to ride up the monumental Stelvio, I turned on the television and discovered a program about cycling’s past. Not able to follow much of the Italian narrative, I was transfixed by the black-and-white footage of an elegant racer, clearly far ahead of the peloton, approaching the finish.

– by Leslie Reissner –
As he sat up, he pulled out a comb and arranged his already-impeccable hair before crossing the line for a the big win. It was Switzerland’s Hugo Koblet, know as the Pedaler of Charm or, even better in German, der schцne Hugo – the Beautiful Hugo. He is prominent in this equally-beautiful book, “Cycling’s Golden Age: Heroes of the Postwar Era 1946-1967,” devoted to what was probably Europe’s greatest era in bike racing, from the wreckage of World War II to the Dawn of Merckx.

The Horton Collection includes cycling memorabilia from every decade of the sport.

Fast Eddy himself opens the book with a foreward, and then it is divided into chapters with brief profiles on forty different racers. Some are familiar–Fausto Coppi, Gino Bartali, Jacques Anquetil–but others much less so. Benoni Beheyt–World Champion in 1963? Michele Dancelli, Milan-San Remo in 1970? Incidentally, the book’s subtitle is misleading as some of the racers were already famous before the war or enjoyed triumphs after 1967.

Each chapter has a concise but invariably interesting account by cycling historian Owen Mulholland, but what makes this book desperately worth having are the illustrations. Since the mid-1990s, Shelly and Brett Horton of San Francisco have been collecting objects and photographs related to bicycle racing from the late 1800s to the present and what must be the cream of their collection appears in this book. Considering they have amassed 18,000 objects and 170,000 (!) photos in their Enchanted Attic, that is saying something.

The book is illustrated with very cool images of the Horton’s collection, like this trophy that belonged to Gino Bartali.

First the Holy Relics: Bartali’s 1946 maglia rosa; Coppi’s from 1952; yellow jerseys from Bobet, Anquetil, Nencini, Gimondi; invoices for food from the 1947 Tour de France (including “2 kilograms of jam”); and posters and banners and toys and old newspapers. As evocative as the invariably moth-eaten jerseys are, it is the superlative photographs that reveal the heroics of these legendary riders.

One would be hard-pressed to pick out a favorite from this vast, detailed and beautifully-composed selection. Among the best: a photo of Coppi in the 1948 Tour de France, escorted by fans in their Sunday suits running alongside the road; or Brik Schotte, pushing his bike up the cobbles of Flanders; and Charly Gaul, climbing a muddy mountain road in the 1957 Giro as fans shout encouragement from the snowbanks.

And the Beautiful Hugo. The Hortons have what must be the Definitive Collection. It includes his 1950 maglia rosa, 1951 maillot jaune, and 1953 Tour de Romandie and European Champion jerseys. There are trophies and a spectacular ensemble of silver, consisting of a platter, two decanters and six cups engraved with the names of his significant victories. Owen Mullholland describes Koblet as a cycling supernova, who burst onto the scene with victory at the Giro 1950 and then went on to win the Tour de France the next year by over twenty minutes. Then he faded quickly, retired and died, perhaps as a suicide, in a car crash in 1964. 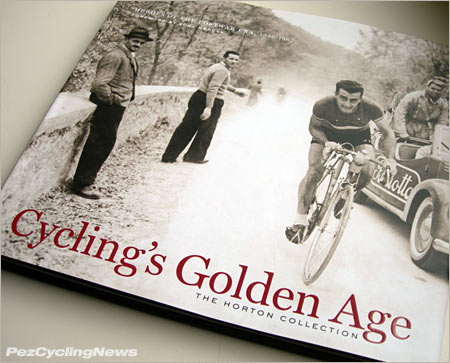 But on Page 65 of this gorgeous book it is still 1951 as someone wearing a black beret and knickerbocker pants passes a water bottle to the elegant Hugo, goggles on his forehead, calm and strong and alone on his bicycle in the mountains on his way to winning the Tour de France.

One can only hope that this will be the first in a series of books centered on the Horton Collection. “Cycling’s Golden Age: Heroes of the Postwar Era 1946-1967,” while not inexpensive, would be a much-appreciated gift for any cycling enthusiast.

Get PEZ’d This Christmas: Free Caps For All!