Once again the editors and contributors of Rouleur magazine have worked their magic, going through thousands of images to assemble a superb collection of photographs marking the 2008 bicycle racing season. If there were fistfights to determine what stayed in, it was worth it.

As in the other publications connected to the Rapha clothing enterprise, the 2008 Annual speaks of the highest quality. The photos are beautifully reproduced, and many are spread across two pages. There are more than 300 pages here. To go through the book in one sitting will overload the senses, so it is best taken reflectively a race at a time as the season unfolds chronologically. 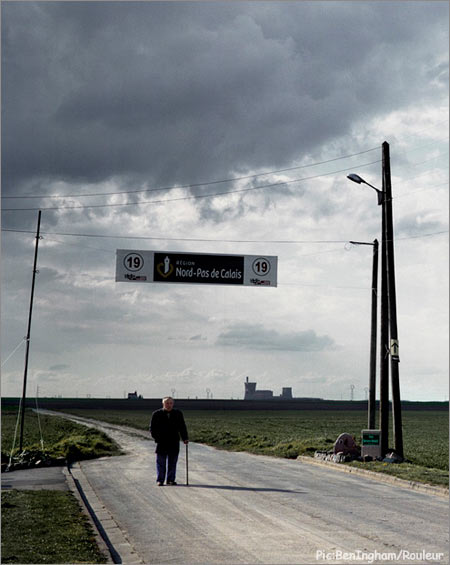 Many of the early season races are fairly invisible, as the journeymen compete and the stars do their preparation for the more famous events. The book opens with an obscure English amateur race, the Dengie, run over nasty roads, where the mud-splashed cyclists dream of greater things than the sparse crowds and a finish marked merely by a spray-painted yellow line and a checkered flag. We move on to the first real pro event, the Etoile des Besseges, where Gerard Brown’s photos reflect the grey French springtime and riders getting into their rhythm. The action really begins to pick up with the 3 Days of de Panne, and the atmospheric shots by Geoff Waugh capture the waiting, the racing, the environment… 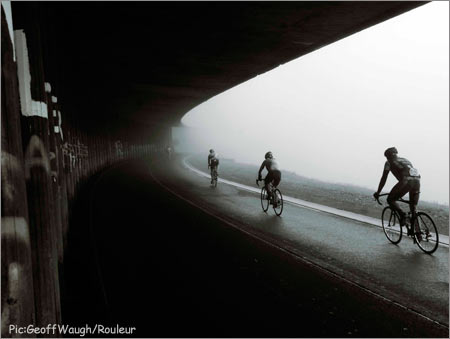 In a print review it is difficult to describe the range of differing photography styles that are featured in this book. The editors have chosen, for some of the bigger races, to present separate chapters for individual contributors’ viewpoints. For example, the Tour of Flanders and Paris-Roubaix each warrant four, and the Tour de France no less than seven. Some of the spectacular races (I have a special weakness for the Swiss stage events, as well as Giro di Lombardia) are not here and it has to be admitted that their superior scenery has been upstaged by the superior photography that captures the drama of the Northern Classics. It is a point of Rouleur’s images that bicycle racing features pain, and occasional boredom, and working-class spectators and a strange timelessness. 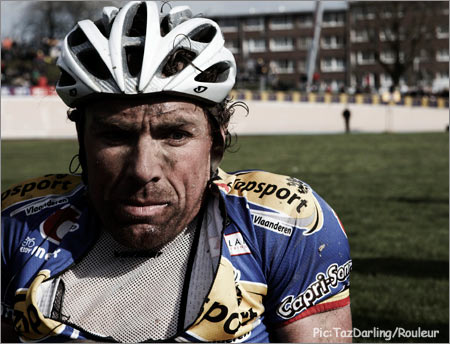 There is much anticipation in these portraits of generally-ignored places in Europe: there is lots of waiting then a flash of speed as the riders tear past; there is victory and loss and the circus rolls on. Unlike fancy glossy photos on magazine sports pages where you wonder why pro cyclists never perspire, this is real life, with plenty of sweat and unyielding cobblestones and bicycles covered with grit. There are colour photos (including some unusual Polaroids) and black-and-white images and they all share this verismo quality. Avante-garde? These are uncompromising photos and they make demands on the viewer.

Some of the chapters have a short introductory essay while in others the photos are left to speak alone and eloquently. Particularly admirable are the chapters that highlight the climbs of the Giro d’Italia, the Dolomiti and the Col de la Bonette, the “roof of the Tour.” The last of these, which is primarily double-spread pages, gives an excellent sense of place, capturing the desolate, inhospitable and challenging summit–all greys and browns under the oxygen-starved blue Alpine sky. I rode it myself three days after these photos were taken and am jealous that my own pictures lack the power of these. 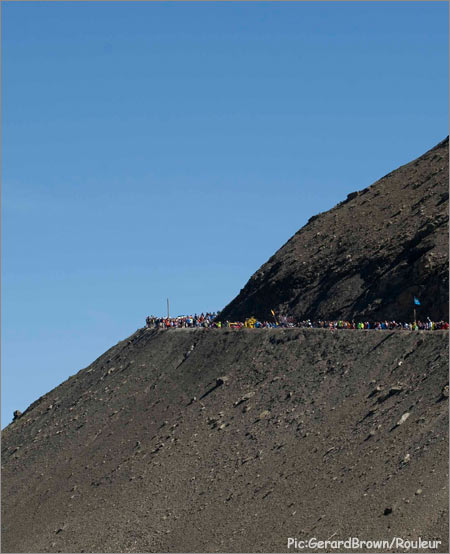 The Tour merits seven chapters because it is the Ultimate Race: backwards into history, forwards across the plains and mountains and past the villages and cities and castles of France. The Rouleur photographers capture the folk festival spirit of the event, the unselfconsciousness of the fans, the daunting task of racing and winning. There are few podium photos because only a handful of participants end up there and the race is about all the riders, all the fans, all the landscapes.

Every time you go through the book you will discover new favourites. On pages 240-1 is an enchanting black-and white image: you look to the right to see a cyclist, looking pro until you realize that his kit does not match entirely and he is wearing running shoes. He is on his right knee and aiming a small camera. You now follow his focus and there, on the left side of the page, a small boy comes riding down the slope, a paved two lane road with a steep brushy embankment, on a little mountain bike, helmeted and mouth open and looking at the man with the camera, presumably his father. There is pride here, and pleasure, and life unfolding. 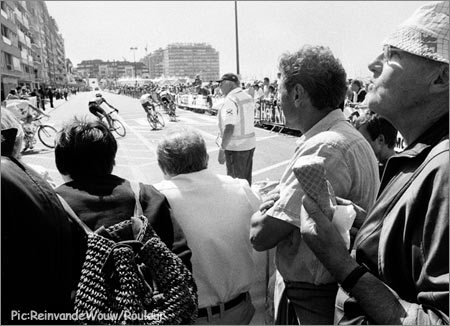 It is hard (and probably unfair) to pick favourites from the fairly small number of photographers featured in the Rouleur Annual. Editor Guy Andrews shows he is a skilled hand with a camera as well as the written word, and also outstanding are Rein van de Wouw’s moody Flanders photos (and the boy and his father at the Tour de France) and Gerard Brown’s aforementioned Col de la Bonette photos. Ben Ingham and Tim Kцlln are other well-knowns from the magazine but I find myself turning back repeatedly to the work of Munich-based Olaf Unverzart. 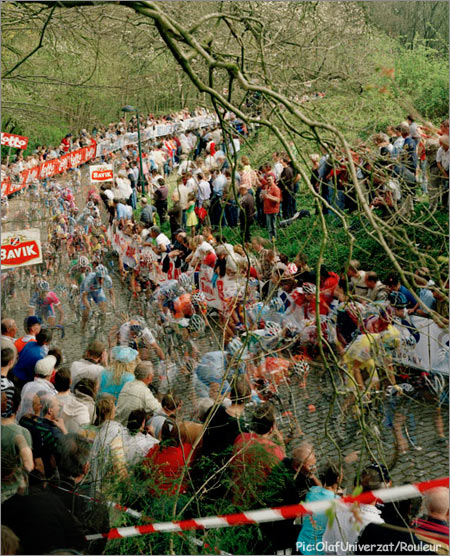 The photos of the empty, and then crowded, roads winding through the Italian mountains are wonderful but the most startling is a chapter entitled “Spectre” presenting photos that have been double-exposed so that the scenery looks permanent but the cyclists ghost-like and insubstantial. Johnny Green’s typically goofy essay talks about an endlessly rolling tape–“The ether is imbued with presence. The ground is vibrant.” Anyone who has ridden the Kemmelberg or the Galibier or the Stelvio, even when it is not race day, understands this instinctively. One of the many joys of cycling is the possibility that we may ride the same hard roads as Bottechia and Coppi and Koblet and Merckx–that what gave them meaning gives us meaning–and these startling photos capture this sense better than I have seen it done before.

Rouleur Photography Annual 2008 is many things: a chronicle of many of the year’s more interesting races; a fine art book; a labour of love; impressive, unique and expensive. Sports, culture, humanity, Nature captured on fine paper. Transcendent, and a necessity for your cycling library. 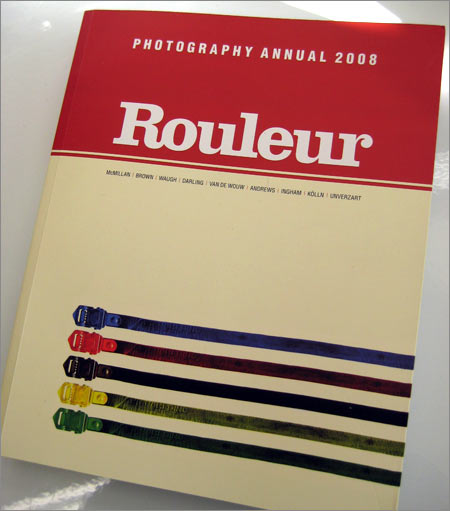 Get yours at
• Rapha.cc
• Rouleur.cc

About the Reviewer: When not perusing through fine cycling books while cradling a snifter of cognac in his mahogany-panelled library, Leslie Reissner may be found recounting his tales of the Tour de Basement at his blog, www.tindonkey.com.