The doldrums of a miserable February are lightened by our friends at Rouleur and their welcome work as we wait for March 8 and Paris-Nice to arrive. And while we wait, the best way to enjoy 2010 is to go backwards and look at 2009. The Rouleur Photography Annual 2009 has appeared. Once again, the art of seeing and the art of cycling brought to you by Rouleur. Read on!

This, for me, is the hardest time of the year, as the weather is cold and bleak, the racing calendar spotty and my own training sometimes desultory, often unmotivated. What is to anticipate with pleasure? Surely not the Tour of Qatar, with its numbingly dull landscape and the inevitable photo of the inevitable camel watching the peloton heading out to the inevitable sprint finish? But our friends at Rouleur have a welcome answer as we wait for March 8 and Paris-Nice to arrive in 2010 and that is to go backwards and look at 2009. The Rouleur Photography Annual 2009 has appeared, featuring the work of many of the fine photographers who graced the 2008 inaugural Annual. 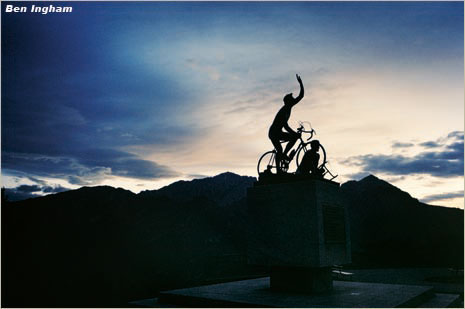 As was the case last year, this book is beautifully bound and presented. Ben Ingham’s cover photo is a very striking image of the famous statues at the famous Madonna del Ghisallo chapel, showing one cyclist victorious, his armed raised in triumph, and another in defeat, on the ground with his fallen bicycle. It is sunrise, with a few clouds and the shadows of the mountains around Lake Como in the distance. Winning, losing, landscape, sunlight, shadow, hope and despair, history and future–surely there has never been a sport so meant for the camera’s eye.

Last year’s Annual was divided into chapters, each dedicated to a particular race. The 2009 format is looser. There are individual chapters but each is dedicated to a particular photographer. There are mini-essays to introduce each chapter, written by well-known chroniclers of the sport, including Jack Thurston, Graeme Fife and William Fotheringham.

First up is Berlin-based photographer Tim Kцlln, and Nando Boers writes about Tim’s technique, his speediness, his need to truly capture a moment. There is a fine sequence of pictures showing Juan Antonio Flecha out for a training ride: he pulls on his gear with a doubtful expression, and rolls out into a winter landscape. There is a car on its roof in the ditch, snow everywhere and still the Spaniard presses on through the dark landscape. Work done, he hoses down his bicycle and you feel the steam and the cold. 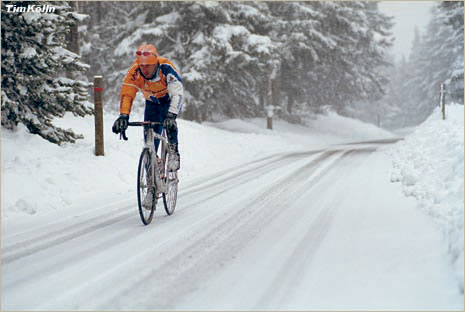 Then photographer Marthein Smit takes us into the wild world of cyclo-cross, where people actually race their bikes and expect to get dirty. It is not a sport of open vistas but rather cobblestoned streets and close-in, darkly-dressed crowds and chilled air, probably with the smell of beer and frying sausages. 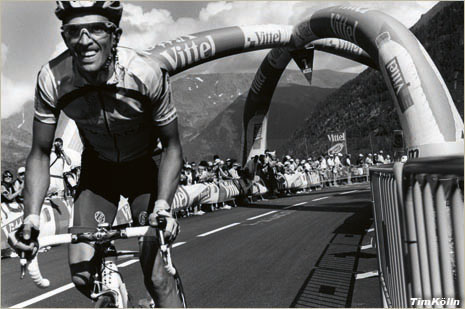 Gerard Brown’s photos, of Paris-Nice, the Tour de Suisse and the Tour de France, among other events, are crisp, colourful and, above all, beautifully-composed. The first photo in the series shows the peloton at the starting line. The picture is framed by an open Tour de France arch in yellow and above is a blue blue blue sky with white clouds. The composition is so good that although the cyclists are looking ahead, ready to roll, you have a sense that they could just as well go upwards as forward. 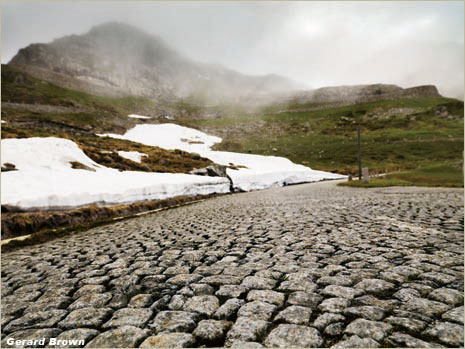 There is a superb shot of Alberto Contador, flat and powerful, a bike length ahead of a Cervelo team rider who has his head turned, looking towards the lake and mountains beyond. The photos of the St. Gotthard Pass, the St. Bernard and Mt. Ventoux all have the same perfect structure and sense of order.

One of my favourites from last year, Olaf Unverzart, returns with a series of pictures of empty roads. They are the cobbled byways of Flanders, strange stone trackways without racers or crowds, and there is instant recognition–“I know this place”–that all devotees of the Ronde instantly will feel. This is followed by a series of photos of Mt. Ventoux during the Tour. They are slightly overexposed and you feel the heat and the openess to the elements on the Giant of Provence but everything looks strange. Why are all these people standing around in this desolation? Who would want to camp here? There is an air of expectation amid the emptiness and finally, in the last photo, the ghostly image of the peloton blurrily moving between the endless rows of parked campers. 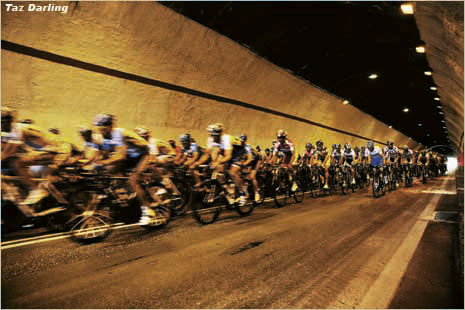 There is so much more: a series of lovely photographs of the Giro d’Italia by Daniel Sharp (admittedly tinged by Herbie Sykes’s bitterish essay about why the 100th Giro was a failure on numerous levels); Rein Van de Wouw’s strange yet engaging postcards, only one of which actually has any racing cyclists on it; Taz Darling’s brooding images, raking you with colour out of their dark denseness. Geoff Waugh presents another aspect of the bike races: the graffiti fans paint or chalk on the roads, momentos that remain long after the peloton has gone by. Some are simply words (“Vive le Vйlo”) and others more complicated and ambitious artworks.

And lastly Ben Ingham presents scenes of the tifosi. The racers are one part of the event, and they are complemented by the fans. Together they share the weather, the scenery, the dreams. The photographer also takes the Fausto Coppi Velodrome in Turin and turns this historic but derelict place into a piece of modern art. 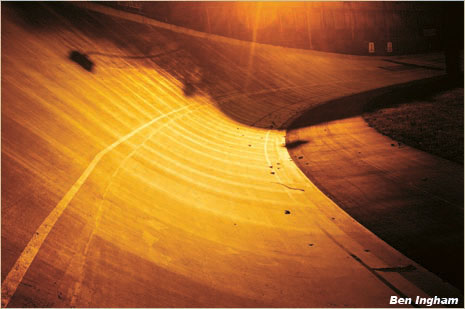 This brings me to my favourite chapter this year: the Tour of Flanders photos of Camille McMillan. Except that you would not know that it is the Tour of Flanders, since there are no cobbles or nasty hills, no fans, no moss-cool woods or brown-grey dark villages. Instead there is, in each photo, only blue sky and one cyclist, mirrored. I imagine it is done with a mirrored filter and some computer magic, but the effect is liberating. It is as if we are looking up through the road, as if the cyclist is flying above us, as if cycling was truly what we imagined it as children.

Once again the editors of Rouleur have selected a varied and thought-provoking collection. I would be hard pressed to pick favourites: Juan Antonio Flecha riding a silent winter road, his orange Rabobank kit glowing in the sleet; Lance Armstrong at speed, looking older than I have ever seen him in a time trial; the Milram team train roaring by at the Giro; the old tifoso sitting with his bike (down tube shifters) in a grassy field, waiting; the haunted velodrome; the St. Gotthard, beckoning. This book is meant to be savoured and enjoyed, a reminder of great days in the past and even better ones yet to come. Photography is the art of seeing and the Rouleur Photography Annual 2009 is a unique kaleidoscope of style, colour and passions. 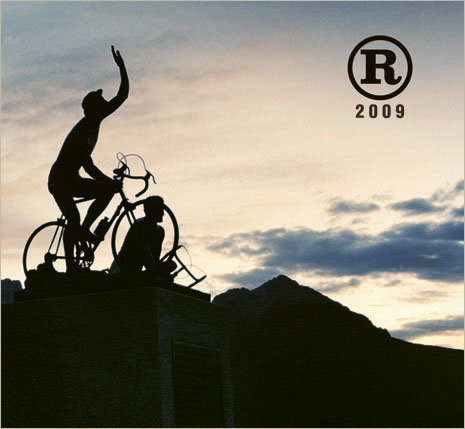 Edited by Guy Andrews, with a foreward by Gerry Badger and a prologue by David Millar

***
When not raising his arm in victory, or at least wishing he was on the shores of Lake Como, Leslie Reissner may be found at TinDonkey.com