My eyes are half shut, my hair is all over the place and I look like a fashion deprived wannabe British pop star as I open the door of my hotel room and head for the elevator. A few months before he’d win the 2009 Tour Down Under, Allan Davis has beaten me to it and already pushed the button…

Good, that’s something less for me to do. He’s quietly talking to his young daughter whose head is sticking out of the hotel room next to mine. She looks in as bad a shape as me. Eyes half shut, hair all over the place… I hate mornings!

We are in a hotel in Lourdes in the Pyrenees. I am working for Bikestyletours.com during the Tour de France. Allan “Alby” Davis lives just over the border in Spain. He is not riding the Tour this year and has joined us for a couple days to help us guide our clients on the rides and tell war stories. Allan and I climb into the elevator. Allan climbs in with grace, while I stumble in, much to the dislike of a couple of Italians. Alby jibbers away to them in Italian. I can speak a few languages myself, but my Italian is as week as a cup of British coffee on a Sunday afternoon. Then I remember Alby spent his earlier years with the Mapei team, so Italian isn’t a problem for him. 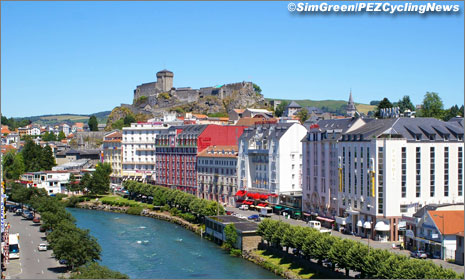 Lourdes is what one might call, a beautiful city.

After a pleasant and relaxed breakfast (I’m starting to wake up) we head out onto the roads of the Pyrenees for a little ride. On the menu today is 140km over the Tourmalet. Allan and I have a group of about 20 people to take care of. We are obviously leading one of the day’s faster groups… it is Allan Davis after all. Once we have negotiated our way out of the labyrinthine streets of Lourdes, I go to the back of the group and let the rest of the guys have a bit of “Davis time”. Alby is very friendly and down to earth, and is about as far from big headed as you can get. After about 40 or so kms I figure we can go a little bit fast, and I’m worried Alby is going to be getting bored at this pace. I roll up next to him and let him know he can pick the pace up a little. He looks at me for a second… looks at the road ahead… looks at me again, and says, “I was quite enjoying this pace actually mate”. Perfect, can’t say it fairer than that!

As we approach the little town of Sainte Marie de Campan at the foot of the Tourmalet (where Eugene Christophe famously repaired his own forks in the 1913 Tour) I shared a story with Allan. The previous year we had also ridden up the Tourmalet on the Tour de France trip. That year David McKenzie and I led a group to the bottom of the Tourmalet. Most bike riders hate stopping at the top of a climb. You just get cold sitting up there, and it’s bad for the body to then go shooting down on an even colder descent. But most people over on holiday want to stop at the top, get a coffee take photos etc. So Dave and I came up with a plan. We had a coffee at the bottom, then went on to a little bakery/cafй and had another coffee, munched slowly on a chocolatine and croissant with the local newspaper, and eventually meandered our way up the climb. As it turned out our timing was perfect. We got to the top just as everyone was starting to head back down the other side. This plan suited Allan just fine. He had got a flat tire coming into town and needed to fix that anyway. So we let the group go on ahead and settled down to “un cafй.” 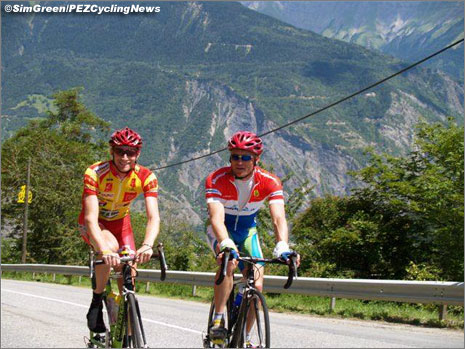 Dave McKenzie made for a fine riding partner the year before.

Coffees downed, we started up the Tourmalet at a steady but conversational pace, and it wasn’t too long before we started passing some of the other people from our trip. We slowed down every now and again to have a quick chat with people, before carrying on our merry way. It was turning out to be a pleasant climb. Allan was riding for the Mitsubishi-Jartazzi team at the time, and when a Belgian fan by the side of the road recognized the jersey he started yelling, “yaaaa, Mitsubishi Jartazziiiii… VDB, VDB, VDB…” For those who don’t know, VDB is what people call Frank Vandenbrouke (the Enfant Terrible of cycling) for short. VDB had signed for the Mitsubishi team at the start of season. 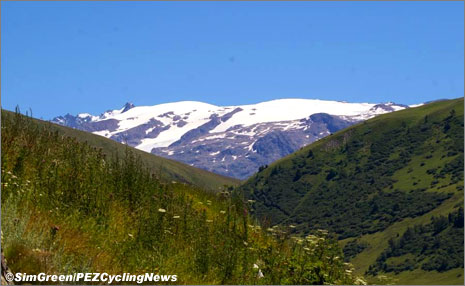 Yep, the Tourmalet is indeed high.

Allan gave a wry smile and little wave of the hand acknowledging the Belgian fan, and carried on churning the pedals. This was all good and well until we hit the ski resort town of LaMongie, 4km from the summit. Allan very slowly started to up the pace. After a while I had to go and sit behind him. About another km up the road, I was actually having to work quite hard to follow him. Now I’m more of a climber myself, and although I am nowhere near Allan’s level, I have won king of the mountains’ jersey in stage races in this exact Pyrenean mountain range. I have also climbed the Tourmalet some 25+ times. 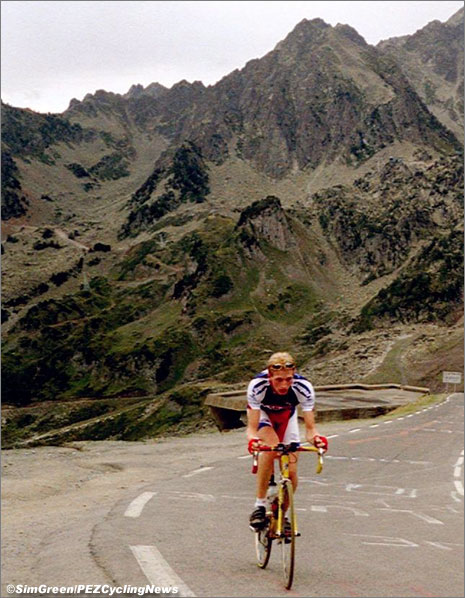 Sim has cut his teeth a few times on the desperate slopes of the Tourmalet.

I am about as far from a sprinter as you can get… and yet here I am, getting schooled up the Tourmalet by a sprinter. And that wasn’t the last of it, things were about to get worse. As we exited the town of La Mongie we passed one of our other guides, British ex-Tour de France Rider Colin Lewis. He later said that he took one look at us as we passed him (Allan cheerfully pedaling away on the front, me hanging on with my tongue hanging out like a dehydrated puppy) and just shook his head. With one km to go to the summit of the Tourmalet I was cooked! The sprinter from Bundaberg, Queensland, Australia had worn me down. I saw one of our clients and thought that slowing down to talk to him would be the perfect excuse for Allan Davis popping me on a climb. I tried to comfort myself by remembering that Allan is probably one of the better climbing sprinters in the pro peloton; that he won the Tour of Qinghai Lake in China that starts at over 3000meters; that he’s finished 5th at the Worlds twice… but at the end of the day, I just had to follow Colin Lewis’ actions and shake my head. 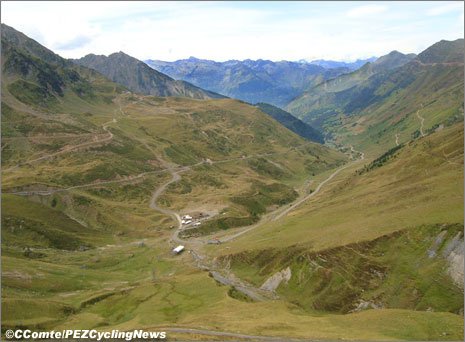 After a quick stop at the top for some people to have their photos taken with Alby, we started down the descent on the other side of the mountain. I have frequently been flying down this descent and come across a herd of sheep in the middle of the road, or a lonely llama ambling across a corner as I come flying around. Allan being a true professional, we decided it would be best to take the descent really, really easy. With all the tourists around, a crash could all too easily happen. So we gingerly started our descent of the Tourmalet… until Colin Lewis came bouncing between the two of us and flew round the next few corners. 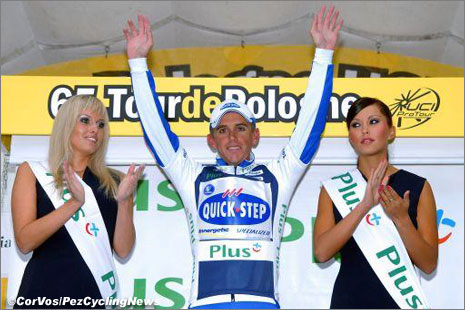 Davis jumped from Mitsubishi to QuickStep at the end of the season and promptly started winning bike races – this one was from the Tour of Poland.

Although not prepared to push it, we couldn’t just let him fly on ahead of us. So we let off the brakes just a little bit. So there’s a lesson for you. True top pros don’t always take all sorts of stupid risks on the bike. There’s a time and a place for everything. Admittedly Alby did spend most of the descent on the phone to his wife, but still… Once at the bottom of the descent we got kicked off the road by a Gendarme more than 5 hours before the race was due to come by. Little did the Gendarme know… but this year, he’ll have a harder time kicking Allan Davis off the roads of the Tour as he has a good chance of being selected to ride the event with his new Quick Step team. 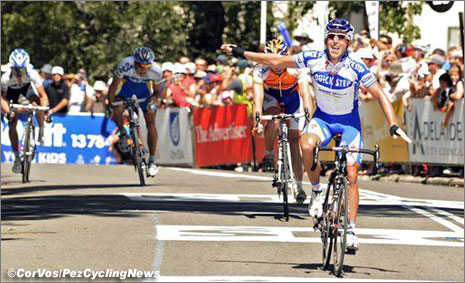 He picked up this season where he left off last season – winning!

So, Allan Davis “the climbing sprinter”. And to think they didn’t know if he could make it over the Old Willunga hill at this year’s Tour Down under. With the hill being only 3km long, and with the summit a whopping 20km from the finish, and with my legs still hurting from last July, there was no doubt in my mind Allan Davis would make it to the finish with the main group on that day. 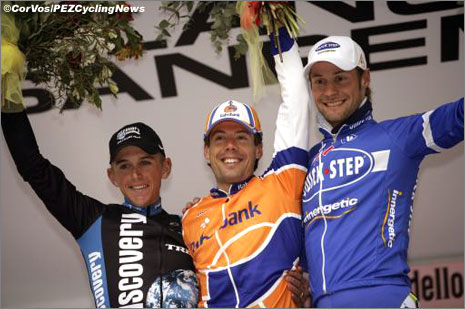 Davis on the podium with Boonen and Freire in SanRemo…this year Boonen and Davis will do battle on the Via Roma as teammates.

Congratulations to Allan Davis on his Tour down Under win, and here’s wishing him a great 2009 season.

Inside The Copenhagen Six: Dane Mania!