As editor, I feel a duty to score as much cool access to our sport as possible, and as regular readers know, I’ve enjoyed some very cool meetings and rides with some of cycling’s biggest personalities. The few days I spent at the Tour of California with Greg LeMond were no different. I also feel a certain duty to share my good fortune with you, dear PEZ-Readers… why should I have all the fun? 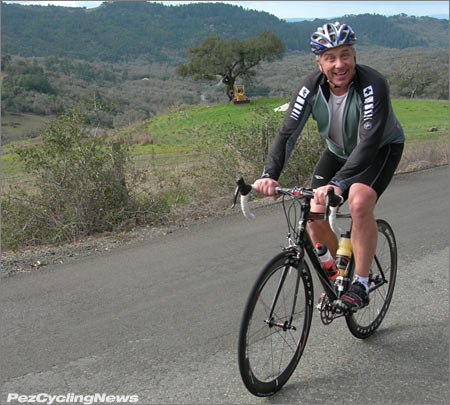 “Hey this bike is pretty nice!” Greg LeMond reacts to the ride of his new Tete de Course.

California Dreamin’
With the Tour of California poised to become the biggest stage race in North America, it was easy to find room in the PEZ budget to get my butt down there for the festivities. But chasing a stage race is no easy task, as a lot of you know – getting there is easy enough, but factor in taking our bike, planning ride routes, booking a different hotel for each night, getting yourself from stage starts to finishes, and the logistics quickly become daunting.

So I was more than thrilled when the guys at LeMond Cycles invited me to the ToC for the launch of their new Tete de Course, built on LeMond’s sub-850 gram Triomphe Ultimate frame. These guys know how to launch a bike – as they sweetened the deal with a night watching the 1989 Tour de France with Greg LeMond and Phil Liggett offering live commentary, plus two days of riding the bikes with Greg, and catching the opening stage action of the ToC itself.

It’s true, I am living the dream. 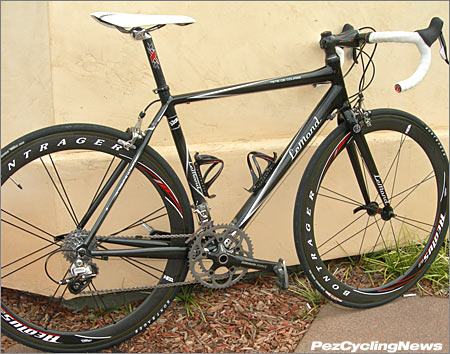 Night With Greg, Phil, and the 89 Tour
Last year at the Tour de Georgia I had the distinct pleasure of viewing the 1986 Tour de France video in a small bar, with Greg himself doing live commentary and answering questions from the 20 (or so) of us present. That was something… And it was so well received that this time they chose to expand the venue, and use the opportunity to raise money for charity. 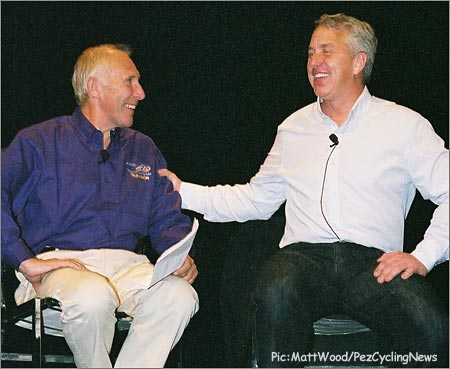 On the evening of the ToC prologue, more than 450 people turned out to the sold out, one night only showing of the 1989 Tour de France video, hosted by Phil Liggett and Greg LeMond. ’89 was the closest Tour in history, with Greg battling Laurent Fignon stage by stage to eventually win by only 8 seconds. It was the first time we saw aero bars used, and signaled the start of the aero-revolution in road racing. 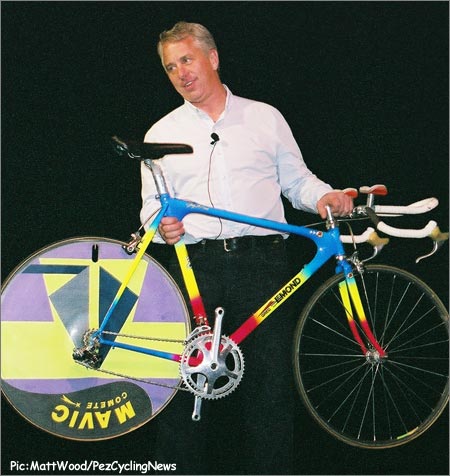 Blast from the past: Greg shows off his ’89 Tour winning tt bike. It’s made of steel and really heavy by today’s standards. He kept it for the 1990 season too, hence the Team Z paint scheme.

The evening was a hit, and for only $20.00 a ticket, race fans got more than their money’s worth as Greg told story after story. And he can tell a story. Seventeen years after that race, you know Greg has recounted his win thousands of times, but listening to him speak, he tells the stories with the same enthusiasm he had as he watched he clock count out those 8 historic seconds.

If that wasn’t enough, everyone went home feeling even better that all the money raised was donated to the Breakaway From Cancer Foundation – $7200.00… pretty cool.

A standout moment was Greg recounting his “bad peach” story from the ’86 Tour. I won’t spoil it for you, but it involved Greg’s intestinal fortitude taking a beating on a scorching hot day in France. It wasn’t pretty, but is a damn funny story. But even funnier is the glee in Greg’s voice as he (completely unhibitedly) shares the tale with 450 people. I suppose Greg’s two sons – Geoffrey and Scott – who were also in attendance, are used to their dad’s exuberance by now. 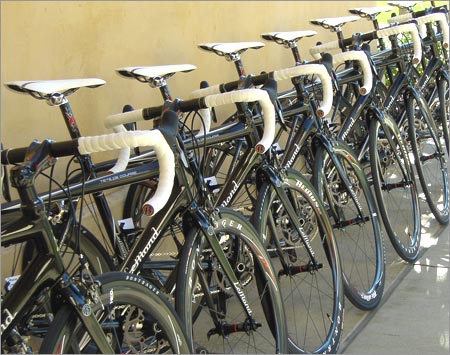 Let’s Go Riding
After a late night transfer from San Francisco up to Santa Rosa, the invited journos arrived ready to ride at the morning presentation of the new LeMond Tete de Course. No matter how cool, new or shiny the new product is, we all just want to get out on the bikes. After some discussion about conducting the presentation on the ride, while our hosts barked out key points via bull-horn from the chase car, we chose to stick with the original program.

Our much anticipated ride took us through a grid-locked downtown Santa Rosa (the streets were closed for the ToC stage 1 finish), to the nearby hills. It’s easy to see why this area is home to Levi Leipheimer, and so popular with cyclists. The town is small, access to the surrounding hills is easy, and there are tons of roads and routes through rolling hills, ranches, and farmland. 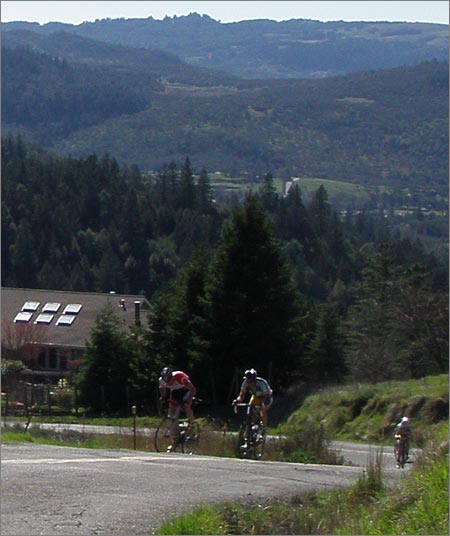 Although we were told our first ride was to be “an easy spin”, a steep 5 mile climb about 30 minutes in kaiboshed that plan. As my first time riding in the area, I was darn impressed with the quality of routes, and climbs. No sooner had I settled into a reasonable pace in 34×23 (Our test bikes were spec’d with SRAM’s new Force Gruppo), than the grade kicked up to something in the 8-10% range. No worries, the weather was warm the sun was shining, and even though I’d yet to start climbing this season, the ‘testosterone-induced’ pace amongst the group meant there was no holding back…

But this climb was nasty – up we went with not a level grade in sight, twisting and turning into the hills hitting pitches that I’m sure were 12-15% in places. After one section that throttled my hr up to max for much longer than is safe for any 44 year old, I admit to being reduced to a few turns at of the ‘paper-boy weave’. 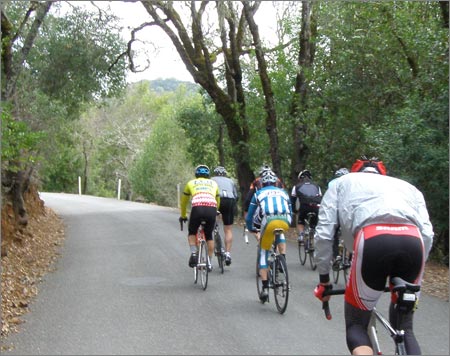 We were spread out all over this climb like not enough jam on toast. Greg himself had dropped back in the early slopes – he’s starting to get more training miles, but his busy schedule leaves little time to ride like he used to.

A Chip Off The Old Greg
But the real surprise came from Greg’s son Geoffrey. I met him last year at Tour de Georgia, and he’d only taken up cycling a few months before – he blamed his aversion to cycling on his youthful drive to be different from his dad (why does that sound familiar?)

In his early 20’s, Geoffrey’s got the build of a racer – tall, thin, lanky. Oh – and he doesn’t shave his legs… yet. His big goal last year was the L’Etappe du Tour – where several thousand rampaging riders tackle an actual Tour de France stage on closed, support roads in July. He finished in the top 300.

Back to the climb – watching Geoffrey it was clear he’s come a long way with his riding, and his natural pedigree is obvious. While those of us in the group started to splinter on the lower slopes, I watched helplessly as LeMond-the-Younger road away with the front guys on the first steep slopes – he was seated and spinning like this was nothing.

Later that afternoon Geoffrey went out and did the climb again…

Echelon Like A Tour Champ
The rest of Day 1 was spent enjoying the race finish and a very nice group dinner at a local Italian restaurant followed by the obligatory after hours rabble-rousing that tends to accompany these gigs.

But the bleary eyes and over-imbibing didn’t deter another turnout of around 10 riders for and early morning session through more local hills. Led again by Greg, today’s pace was much more civilized, as we settled in for an hour-long warmup, gradually climbing into the hills east of town. Even the climb was better – only around 3 miles and not nearly as steep – it was still a good way to rev up the system for the next 2 hours.

Given that most of the climbs in this area twist and turn, it was no surprise that our descent into the next valley was a roller-coaster, complete with a few blind turns and unexpectedly sharp bends and transitions.

It was a great test of the Tete de Course’s stability, braking, and handling. I’ll cover the bike off in more detail in an upcoming report, but the real fun here was watching Greg lead the way. Apparently lack of fitness has no bearing on his love of going fast downhill. I’ll admit to seeing only his back wheel disappear after the first couple of turns – it was clear he was on a tear.

What started as a fast & fun descent quickly became a steep twister, where self-preservation took over my need for speed. And I’ll add that the bike did everything I wanted and asked – and I was impressed by the solid braking power of the SRAM Force brakes and Bontrager Aeolus 5.0 carbon clinchers. (More on that later too.)

Echelon With Greg
The best part of the ride came when Greg organized us into a fast rotating echelon through some flatter valley roads. As we plunked along, happy to take in the beautiful scenery and revel in the fact that this actually counts as work, Greg took charge. A few quick instructions and pretty soon we were riding like a pro team, … a slightly disorganized pro team, but you get the idea.

The pulls were short and the speed high. It’s obvious that Greg’s engine is huge as he had no probs powering us along and lifting the speed on the flats as he desired. And as I sat on Greg’s wheel for a few rotations, I couldn’t help but think of all the top pros who’ve seen this view as they raced with Greg in his pro days. I’ll never ride the Tour, but I do know what it’s like to sit on the winner’s wheel at 45kph…

The coolest thing about meeting Greg under these unique and unusual circumstances is that so many years after his career as a pro, he’s still as fired up about bike riding as he was then. He’s not in the kind of shape he was (or wants), but he’s a genuine, fun-loving guy who loves to ride and knows how to tell a great story.

It just so happens a lot of those stories are about winning the Tour de France.

Stay tuned for the Pez-Report on the new Tete de Course Triomphe Ultimate, and check out the rest of the LeMond line at LeMondBikes.com