Part One: I have to start this by confessing: I love the Ronde van Vlaanderen more than any other race…times a million, squared. Sunday’s trip around Flanders under the direction of Andy Deschuyffeleer was straight out of my one of my wildest dreams. I’ll try to use words where they’re available, but I remember the day most through the pictures Ashley and I shot from Brugge to the Bosberg.

As always when it comes to a big one day classic, the day started quite early, and with the 6+ hours of riding from the sportif the day before, our rising was of the bleary eyed variety.

Fortunately, in my excitement, which extended all the way to sleeping patterns (I liken it to Ale’s deep seated love for Milano-Sanremo), I somehow woke up thirty minutes early. Good thing too, because when I set the alarm only four hours before, I had messed it up big time. See, right there you know this race is special for me. My love for the Ronde saved me from my own ineptitude. 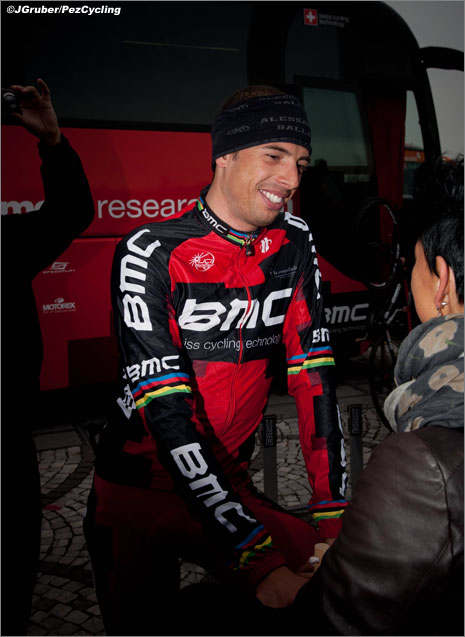 BMC were early arrivals, and Alessandro Ballan was an early star to emerge from the bus. He came out to visit with what looked to be some good friends.

We got going, enjoyed our typical travel annoyances and irritations, made it to Brugge, somehow found a parking spot, then set off for the press area, visited the commensurate fourteen different people who all directed us elsewhere, made fourteen different turns, only to find that the first person and the first door was where we needed to go. 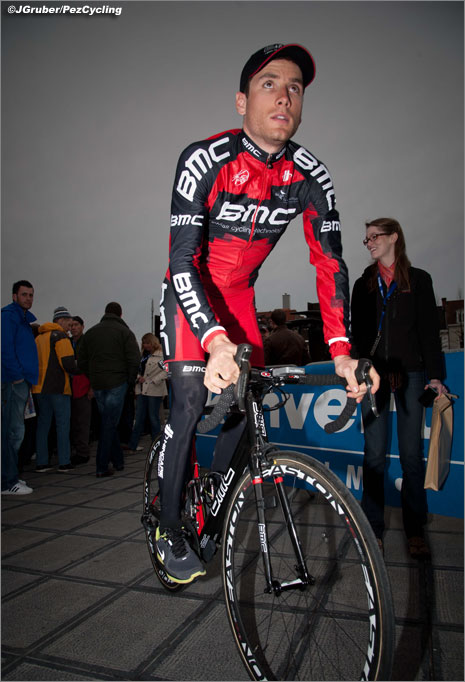 With credentials handed to us by the fantastic Lien Crapoen, we moved outside and into the fray that wasn’t there. Somehow, we were early. Only one team bus was in the main parking lot. We were still in that frantic gotta get there now right now phase, so I walked in circles for a second, then realized that it was ok. There’s something about a race start that stresses me out. 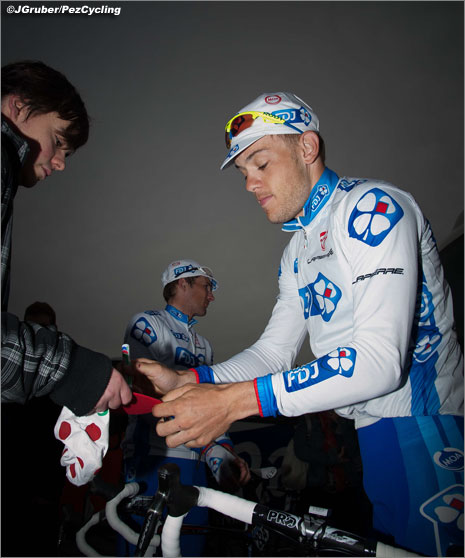 Cyclocross cross-over, Steve Chainel, started the day as an outsider for the win. He was greeted by an eager, pen-wielding crowd when he eased out of the bus.

Once again, we ran into some good friends at the start, met some people we’d been meaning to see for a long time, and most importantly, we found Andy. Andy, the father in law of Belgian flahute, Bert Roesems, has been a stalwart in the PEZ efforts in Flanders for quite a few years now. He has shown around Gord and Ed in the past, but this time, it would be Ashley and me. 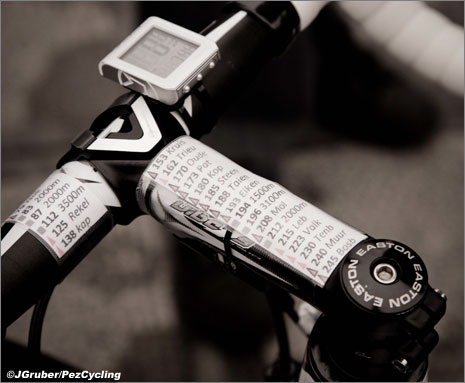 A couple of hellingen and cobbled stretches to remember, no?

After a long walk back to the car through one of the prettiest cities my boots have ever had the privilege to explore (punctuated by many an extra turn necessitated by the thousands of people that made certain streets impassable), we got to the car, applied the all powerful press car sticker, and set off for our first race viewing point – Izegem. 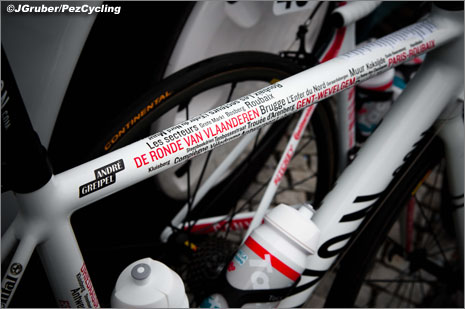 The strategy was soon imparted on us from sage Andy: park as close to the race as possible, make sure you have a clean get away, get in your car as soon as possible, do not take no for an answer, drive fast, try not to hit any spectators or cars. 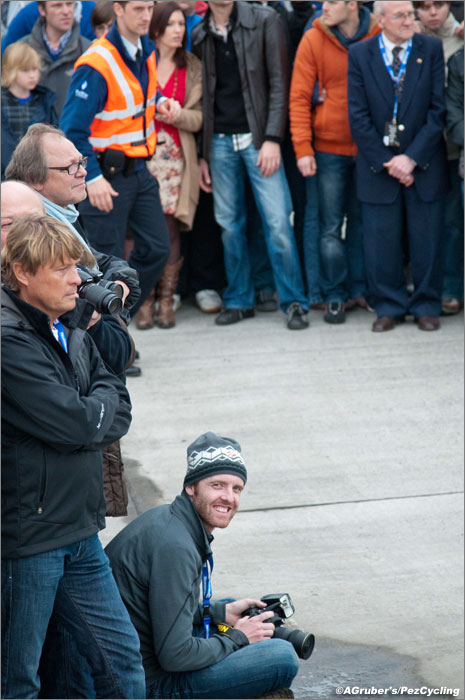 Getting ready to do some flash experimentation…and falling terribly flat on my face in the process. Not to self: experimentation is best left for days that don’t read – Ronde van Vlaanderen.

After Izegem, where the race was still very much in one piece after thirty very fast kilometers, we began to become privy to Andy’s genius. He doesn’t hear or understand the word no. It means nothing to him on a race day. 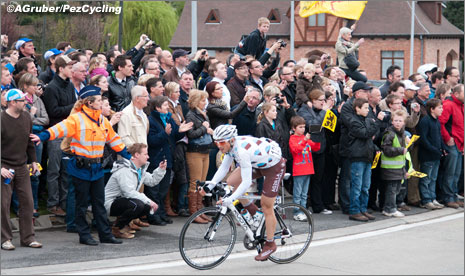 Luckily, Ashley had staked out a good spot for herself and got some really nice shots of the race hurtling through Izegem.

We got far enough ahead of the race, pulled off the highway, then tried to get on the race course. Getting to the actual course from the exit was quite the adventure. Considering that it was about 200 meters from the exit to the course, you can imagine how densely packed the cars were. No worries, Andy hops out o the car, and directs us through the cars and eventually into jungle high grass to make the final push to the course. 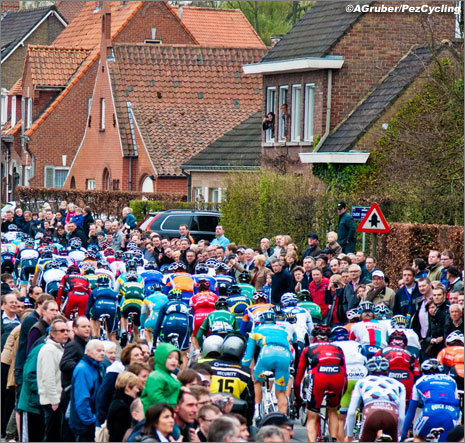 I know hurtling sounds excessive, but they really were going quite fast. No early mosey to be seen here.

That was just the start: of course, when we got to the course, the policeman guarding our exit said what all policeman say in times of major events: no. There’s no question – before the day starts, everyone involved in running a bike race is instructed to say no, no matter what.

Andy, a veteran of hundreds of races, didn’t even blink when the policeman said no.

‘They’re American journalists. We have to get down the road to take pictures for the race. It’s very important.’

Then there’d be some grumbling a little more debating, and finally, we’d be permitted to pass.

This happened at least 15 times on Sunday, and if I were exaggerating, I would have picked a number more like 30. Looking back, I don’t think we would have made it past Izegem without Andy’s help. The man knows how to work his way around a bike race like Fabian Cancellara knows how to crush poor weeping pedals. 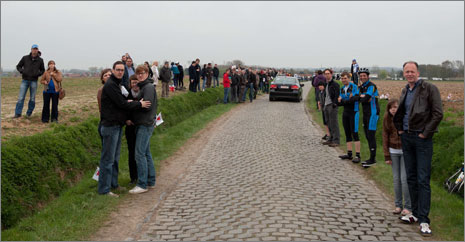 With Andy’s brilliance, we made it on to the course, and there we were, rolling along the roads that would make a champion in a few hours, marinating in an atmosphere that can only be described with cliches (If pressed, I would likely choose magical). The news predicted that nearly a million people would line the 258 kilometers of road from Brugge to Meerbeke. Looking back at the blurred pictures we took while hanging out of the sunroof, I find it hard to believe that the entire population of Flanders wasn’t in attendance on Sunday. I think they were.

We got on the course just before Stijn Devolder’s hometown of Deerlijk. The two-time Tour of Flanders winner must have gotten quite a welcome from his people. The little town was festooned with Devolder memorabilia and innumerable signs urging their hero to take his third win. 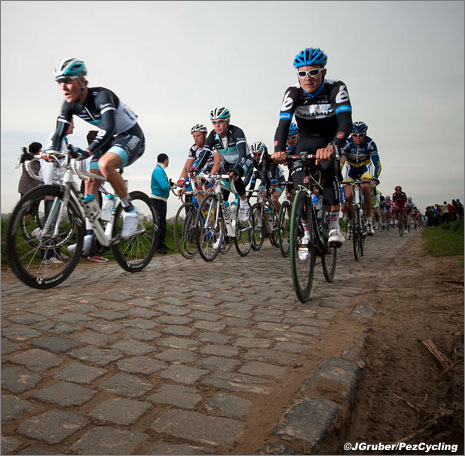 Garmin-Cervelo were looking good early on. They had Roger Hammond in the break, and the front of the peloton was patrolled largely by black and blue.

After Deerlijk, we went up and over the day’s first two climbs, the Tiegemberg and Nokereberg. Both were relatively innocuous introductions to the rigors to come, but earlier in the spring, they played host to big racing – the Tiegemberg was the site of Fabian Cancellara’s last monster attack at the E3 Prijs last weekend, and the Nokereberg is the difficult uphill finish to the Nokere Koerse, which Gert Steegmans won just a couple weeks ago. 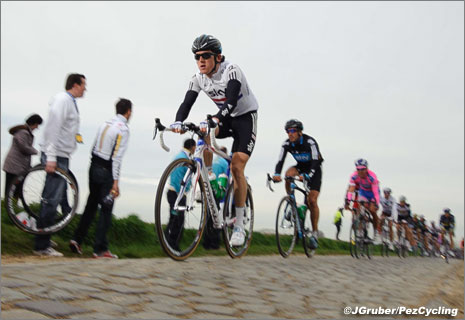 Midway back, British champion, Geraint Thomas, was just getting into the process of putting in a brilliant ride.

My point? These climbs, roads, and towns have hosted innumerable races. Racing is a part of the land. You can’t get away from it. With Andy directing the way and telling us stories, it was hard to remember sometimes that we were on the race course and not out for a leisurely drive around the countryside. He told story after story, and I felt like a baseball obsessed 8 year old ready to go see my first Major League game, except I was on the field already, and I’m twenty years past eight. 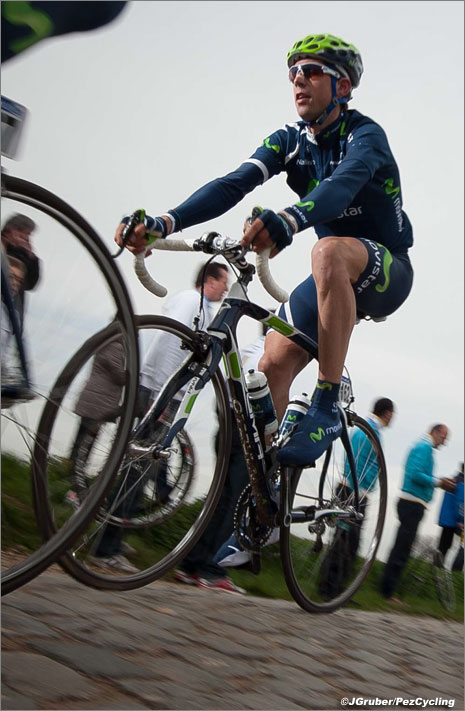 It’s hard not to feel bad for the Spanish riders that are forced by rules to take part in these races.

We pulled off the course on the day’s second cobbled section, called Doorn. It’s a nasty stretch of uneven, concave rocks. For anyone who has ever had the pleasure of enjoying a major race in Flanders, there’s nothing like the Rodania car barreling down the road. The car leads the race by a couple minutes the entire day, bellowing: Ro-dah-nee-yaaaaa, everywhere it goes. Like a hard earned Ronde hang over, it will be a part of you for many days afterwards. 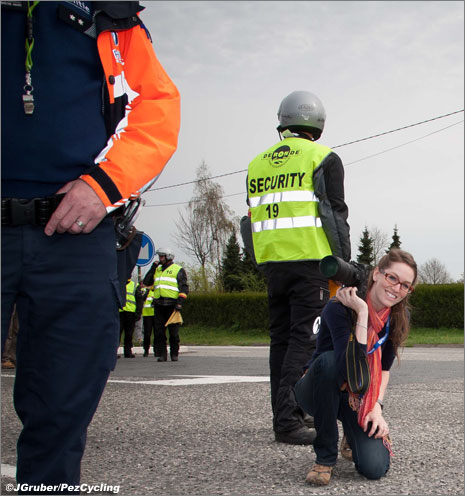 Ashley getting ready to take some shots of the women’s race.

I lied earlier when I said that Andy doesn’t take no for an answer. There was one time yesterday when Andy was definitely told no, and being the understanding man that he is, he accepted the no that actually means no – the women’s race was thirty seconds away when we asked. I’m very glad we weren’t allowed to cross, because I wouldn’t have wanted to be THAT guy. 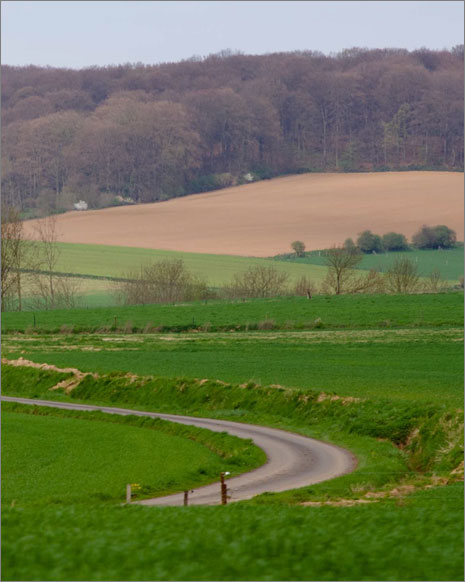 The road to the Knokteberg, or the Cote de Trieu, depending on which side of the Wallonia/Flanders border you live on. 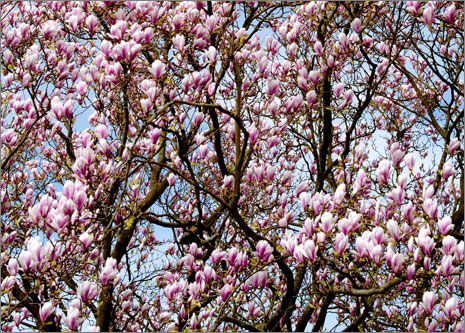 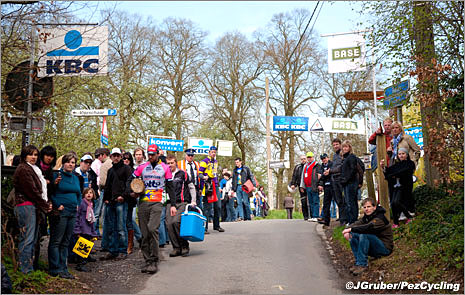 The upper part of the Knokteberg. 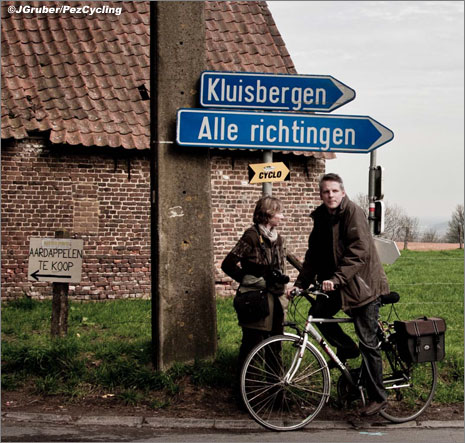 The turn taking the race out to the main road and on to the first major cobbled monster: the Kwaremont.

After the torn to pieces women’s race rolled by, we got back on course and headed on to the meat of the course, up the Knokteberg, down the Nieuwe Kwaremont, and right back up the same hill, but just a few meters over: the Oude Kwaremont. 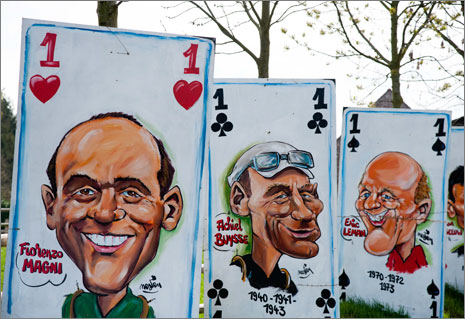 The legendary paintings that line the run-in to the Kwaremont. 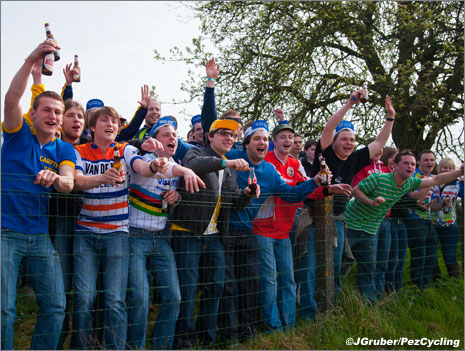 The Knokteberg
We parked at what might be the best place to check out the race all day. In a matter of a few meters, you can see the race twice, in two very different situations – right after summiting the Knokteberg at full 53×11 speed and then again a couple minutes later on the Kwaremont doing the business on some of the toughest cobbles of the day. 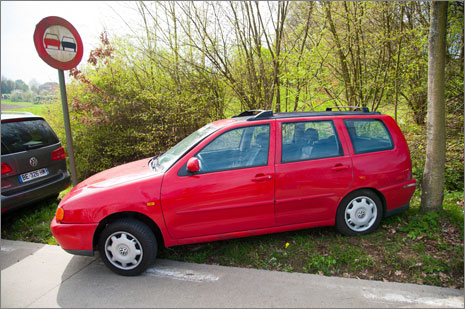 It’s a beautiful place to watch the race, the atmosphere is fantastic, and on Sunday, the weather was great, despite the weather forecast’s ominous predictions. 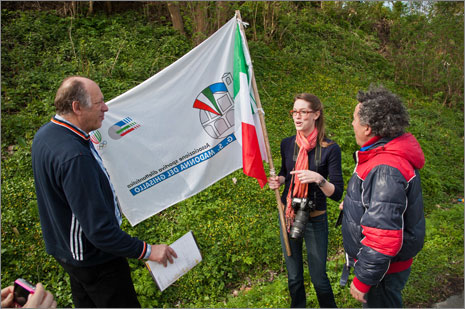 Ashley with our new friends from the Madonna del Ghisallo.

Whilst waiting for the race, there are never too many minutes of boredom. Even when you find yourself with a half an hour wait for the race, somehow, friends start being made, especially if you’re with Ashley. In the span of five minutes, Ashley made new friends with some Italians from the Madonna del Ghisallo and Ed from SRAM. We were almost sad for the race to come. I’m just kidding. Really, this is the Ronde. 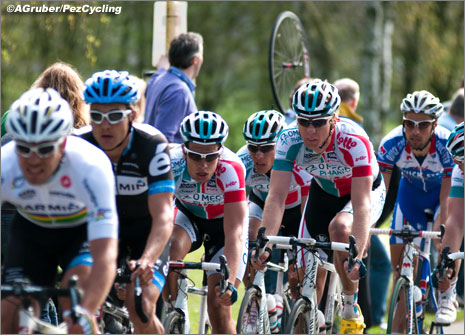 Philippe Gilbert doing a good job of hiding from the race and the elements behind two teammates.

When the race came through, the early break’s time gap was exiting stage left, and as the chasing field roared by, the idea that the race starts at the Kwaremont flashed through my head. Perhaps someone should have mentioned that to those in the field. The race was already coming apart at the seams. The field was one long single file string, if you can call a string with large holes throughout it, a string. The race was on. 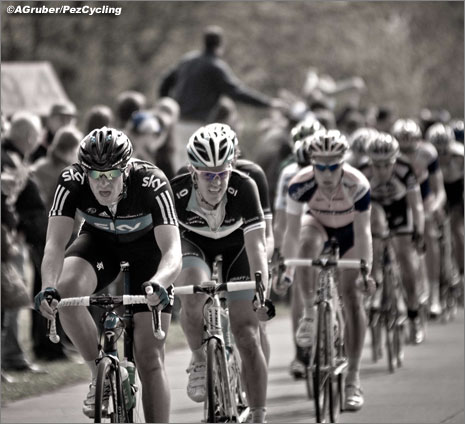 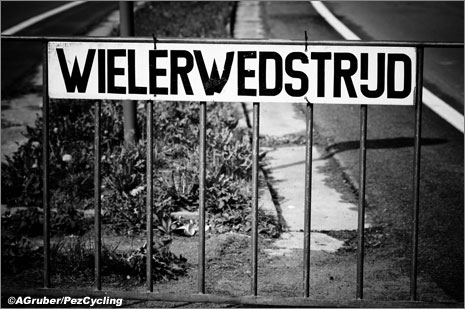 With that, I’ll wrap this up for the day. We’ll pick up the rest of the story tomorrow. Stay tuned, because while I like the first part of the day very much, like any race, things get a whole bunch more interesting in the second half.

Questions? Comments? Email me! . Want to enjoy the play by play here in Belgium? Try Twitter. If you’re looking for a bit more, there’s always the tried and true, JeredGruber.com

Toolbox: Have you Stopped Improving?