The 2015 Tour de France is a matter of only 20 days away, but Ed Hood, our most experienced Grand Tour reporter, is thinking back to the first of his ten ‘accredited’ Tours. The 2006 Tour was an up and down affair; it was scandal riddled, maybe not as bad as 1998, but the Floyd Landis Tour of ’06 went down in history as one of the worst.

If The Good Lord spares me and I get to the 2015 Tour de France, it’ll be my tenth Tour de France as a photo journalist for PEZ. In honour of this momentous occasion, I thought you’d like to have a wander back through time with me to 2006 and ‘THAT’ Tour. I can remember The Boss saying to me; ‘when are you going to write something about the race instead of all this scandal?’ And I remember replying; ‘but maybe there’s not going to be a Tour de France, Boss !’ – it was that bad…

But it did go ahead and what a farce it turned out to be – but I loved being there, let’s take a wander back to Northern France, 2006: 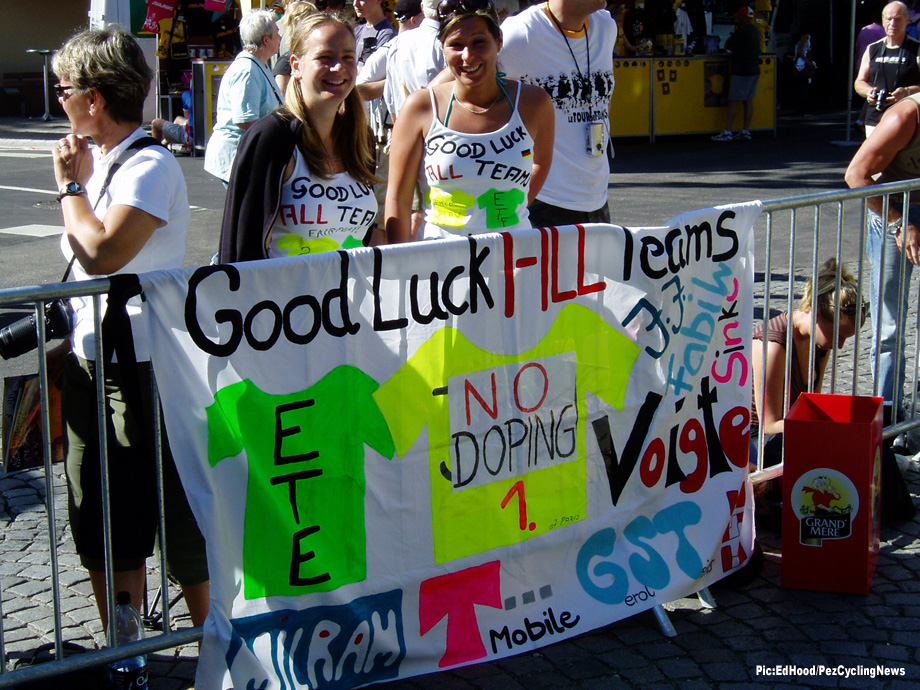 These girls had their hearts in the right place but they sure got it wrong – as we’d all find out later. 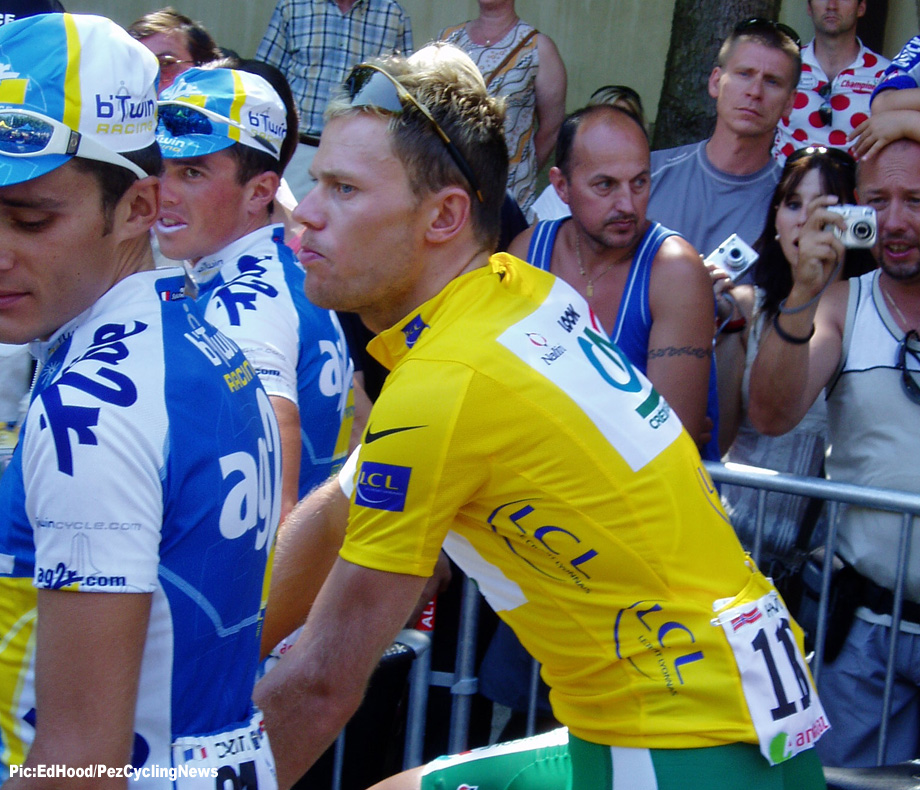 Sturdy Norwegian, Thor Hushovd won the prologue to take yellow, a fast boulevard blast around Strasbourg; I even rode a couple of laps of the circuit, early that morning – I was slimmer back then. 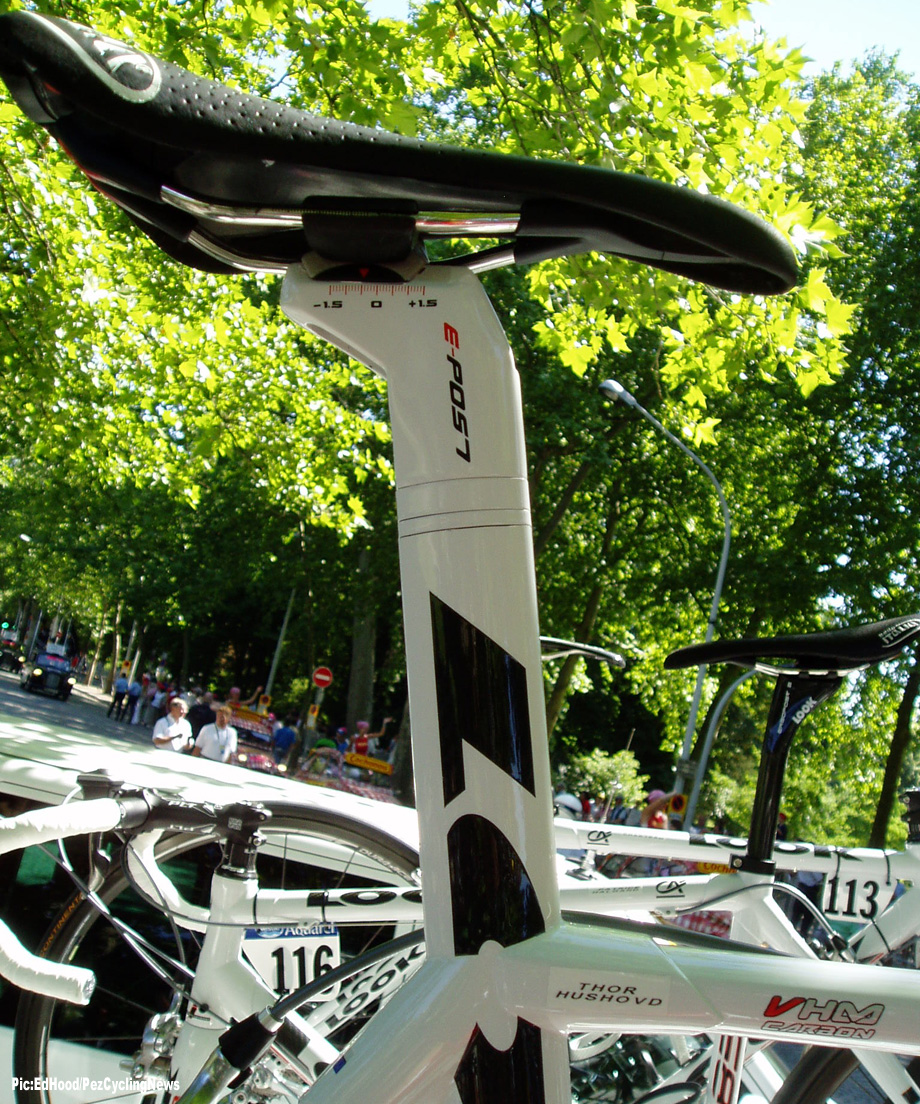 Thor was one of the first to test ride Look’s latest offering, I was snapping away at it when a French journo who did in depth tech. features for a magazine approached me in a state of despair; ‘did I have a tape measure so he could check Thor’s frame dimensions?’

Reaching into my trusty musette I plucked out a measuring tape and the French guy and I became close friends as he talked me through all the features on the Look – including the elastomer shock absorbing spacer which fitted into the integrated seat post and could be changed to suit the road conditions.

All sad stuff – but I loved it. 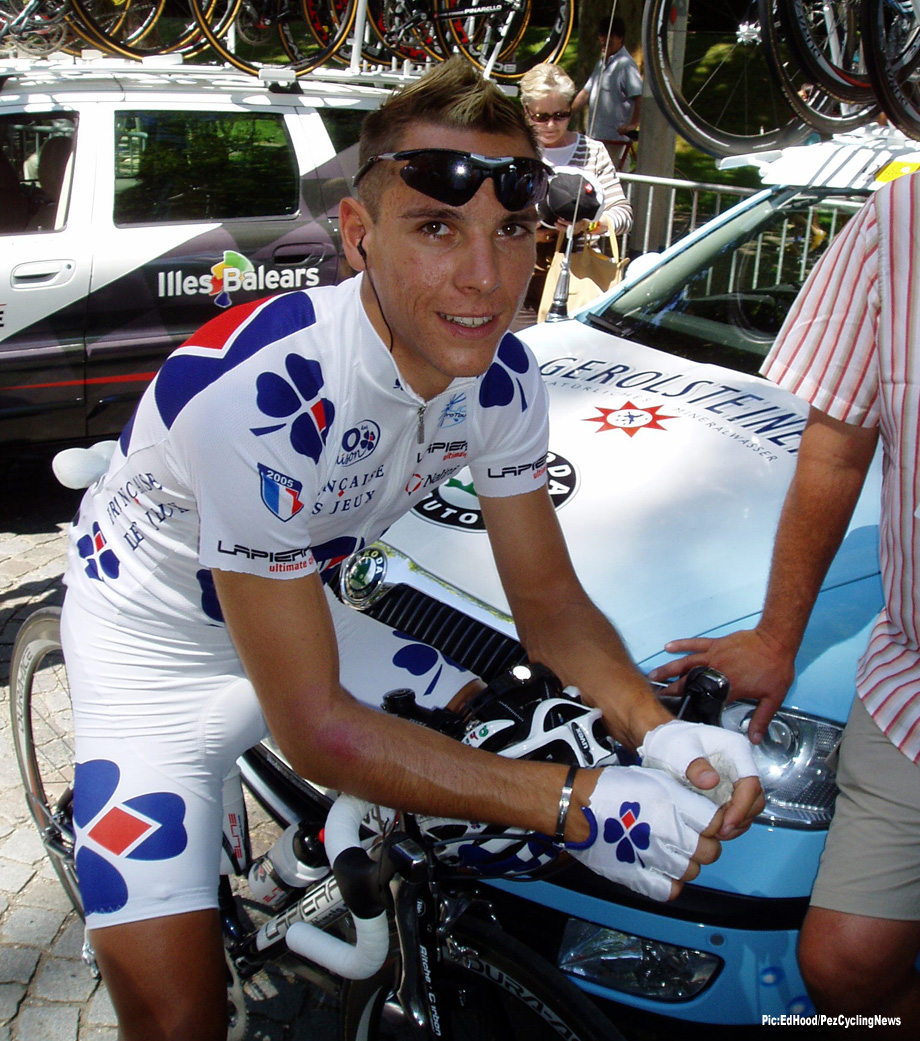 Phil Gil was just a lad back then, fresh of face and riding for a French team – a very good move, it let him develop without the pressure of a rabid Belgian Media who brand every promising youngster, ‘the new Merckx.’ 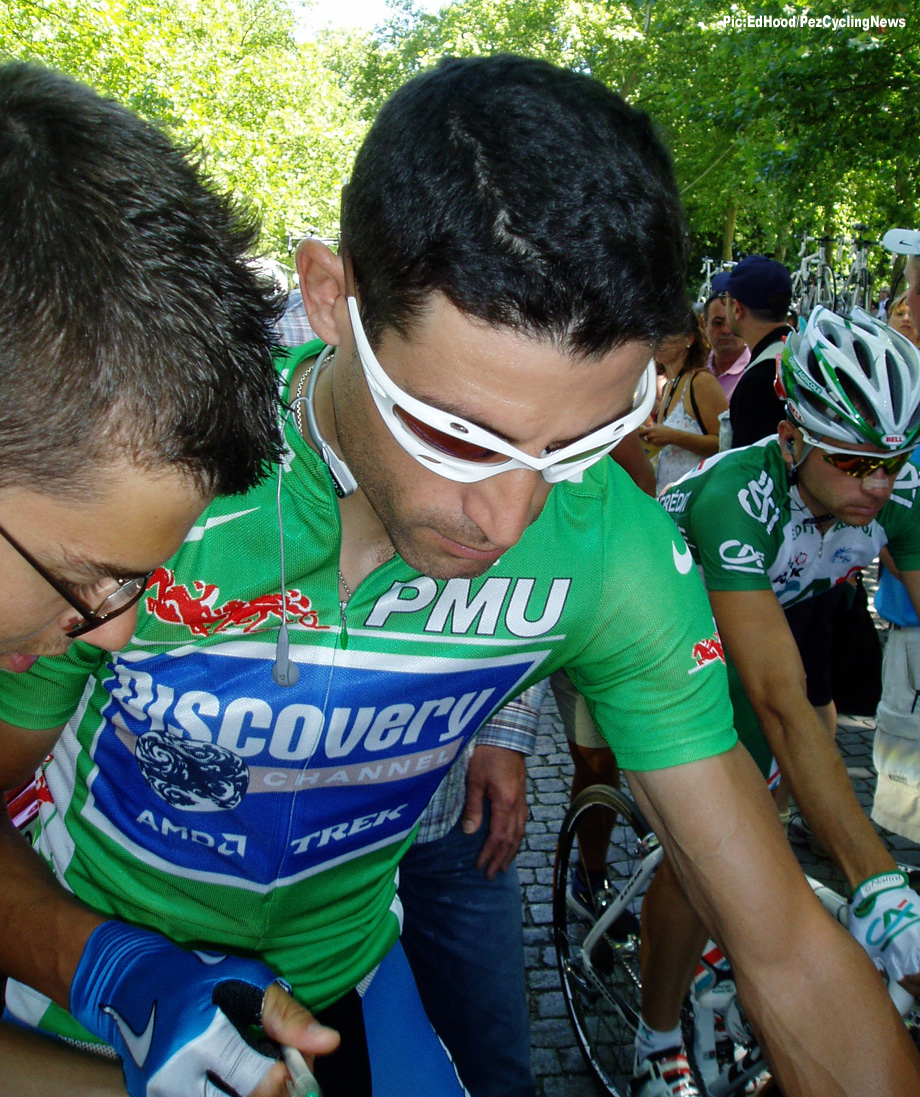 Big George was still, ‘the boy next door’ back then but his name has a line through many of his performances, now. It wasn’t a good time for our great sport. 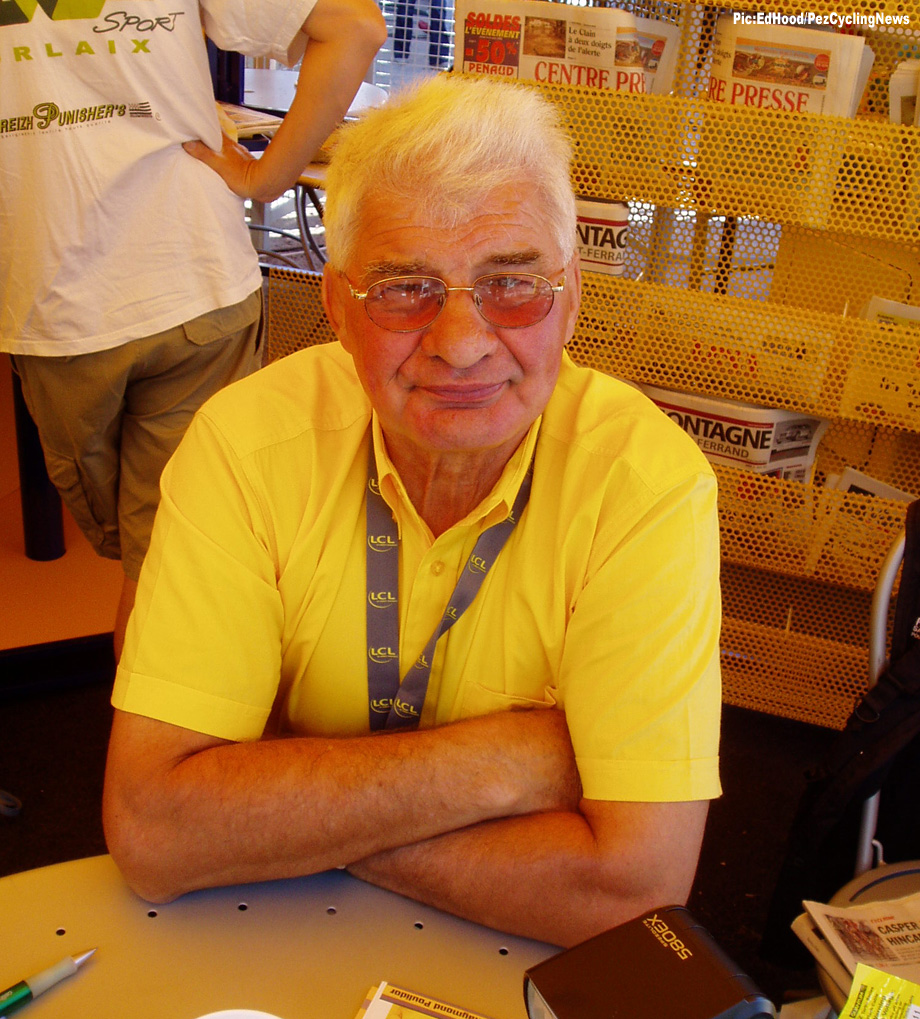 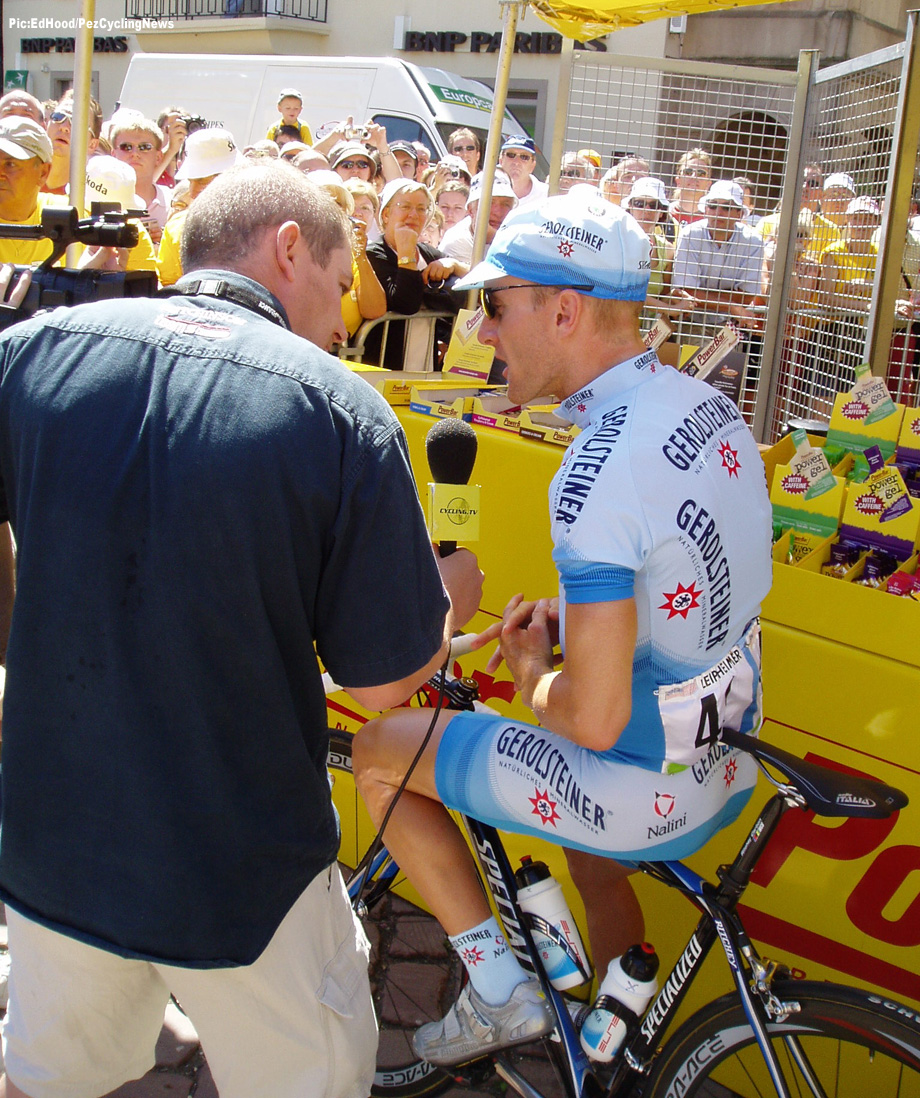 I hung out with the guys from Cycling TV that year; here they interview Levi Leipheimer, another man with a line through his name in this Tour. Leipheimer was declassed after winning the US Criterium Championship in 1996; we all believed that it was due to taking an allergy remedy. He was too nice a guy to dope . . . 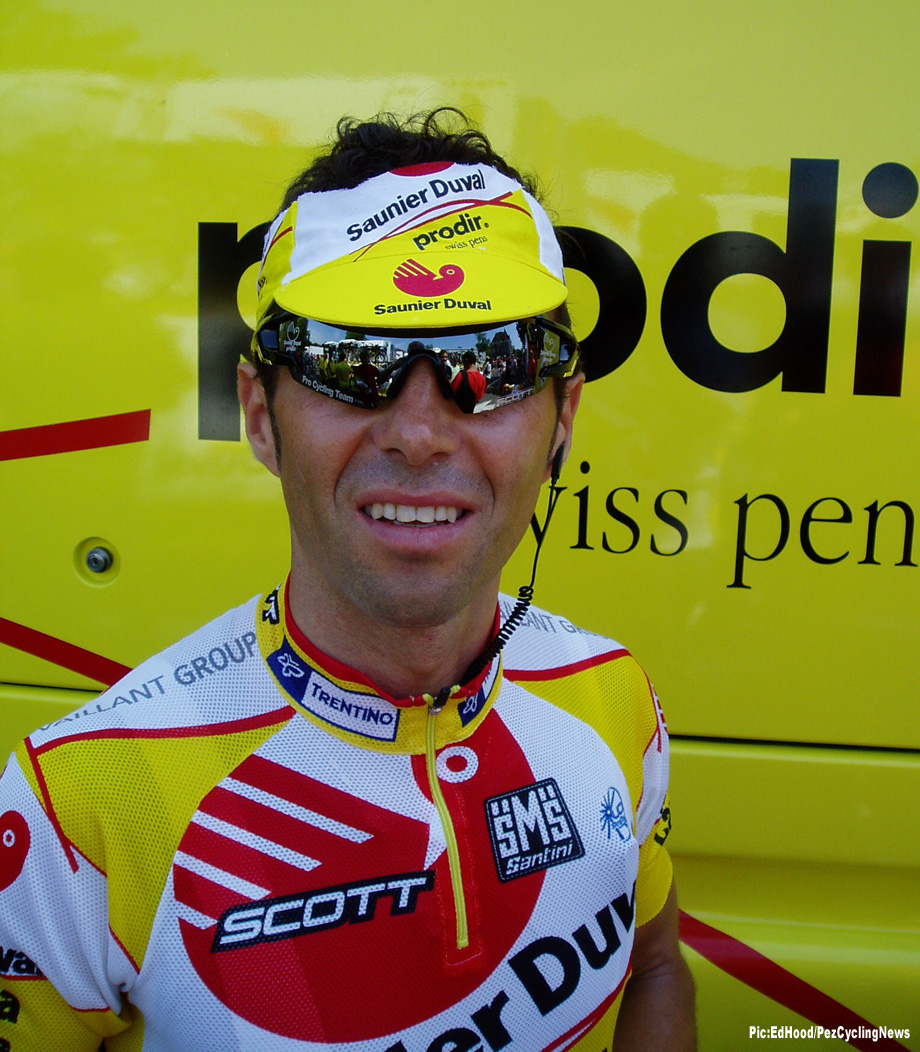 I interviewed Gilberto Simoni, once – it was a surreal experience but as David Millar explained to me; “he’s on Planet Gilbo, all the really special guys are a bit like that… 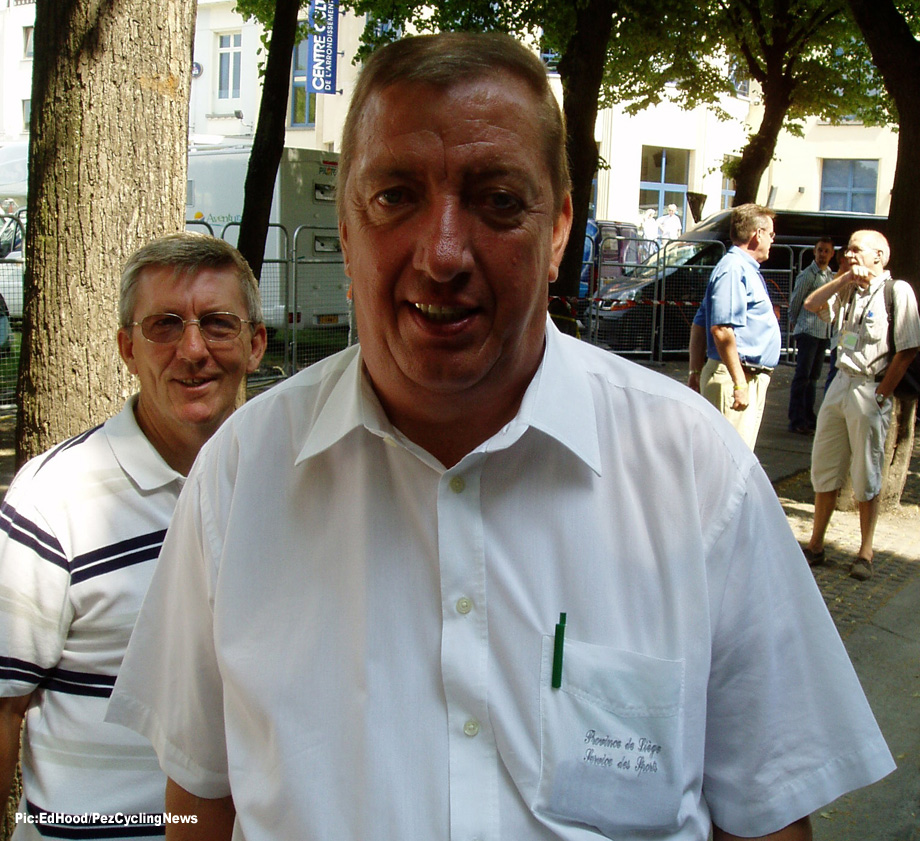 One of the highlights of that Tour for me was getting to have a few words with Eddy Merckx’s former right hand man, big Jos Bruyère, two Liège-Bastogne-Liège, three Omloop Het Volks and a long spell in yellow as leader of le Tour – enough said. 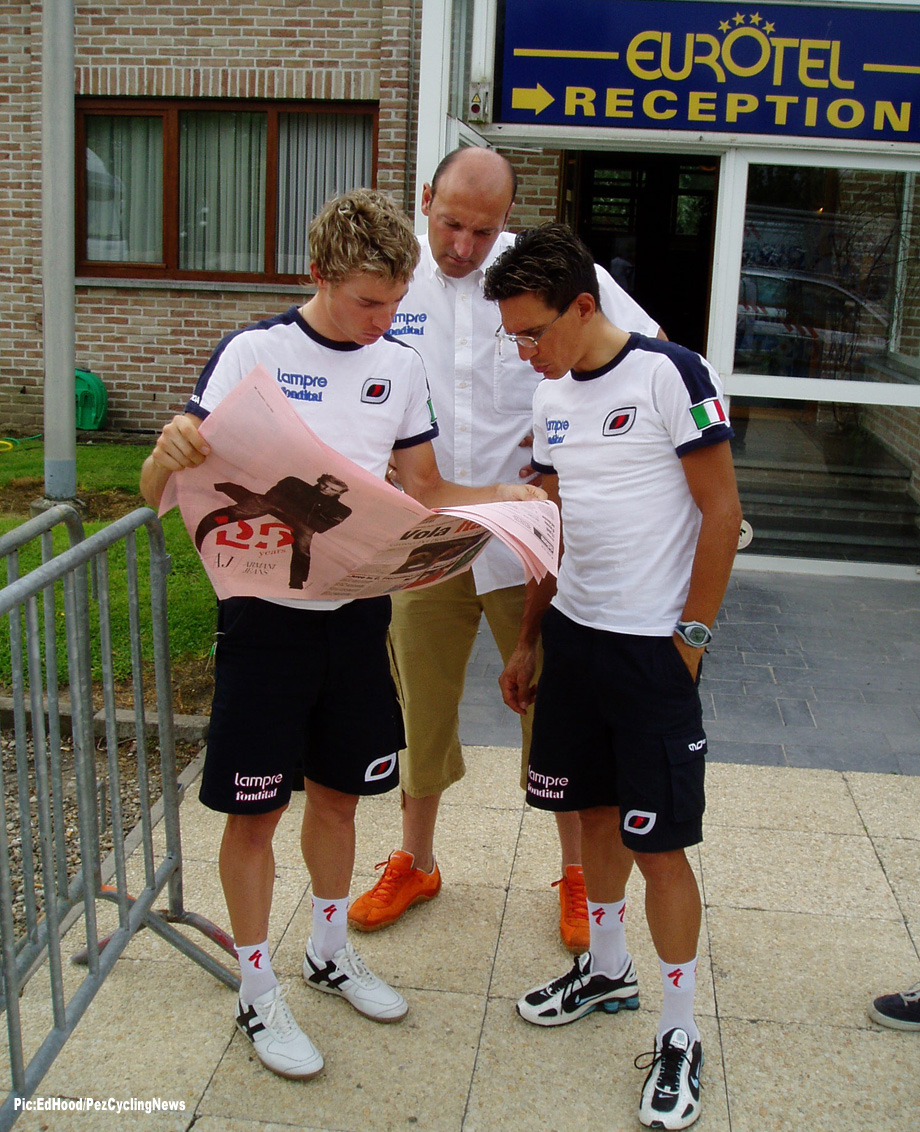 Best young rider that year was Italy’s Damiano Cunego, here he peruses the Gazzetta with big Lampre team DS Guido Bontempi peering over his shoulder – looks like the Gazzetta didn’t give the ‘Little Prince’ too many out of ten, that day. Cunego rode with brio in the Giro, this year – a shame to see him crash out. 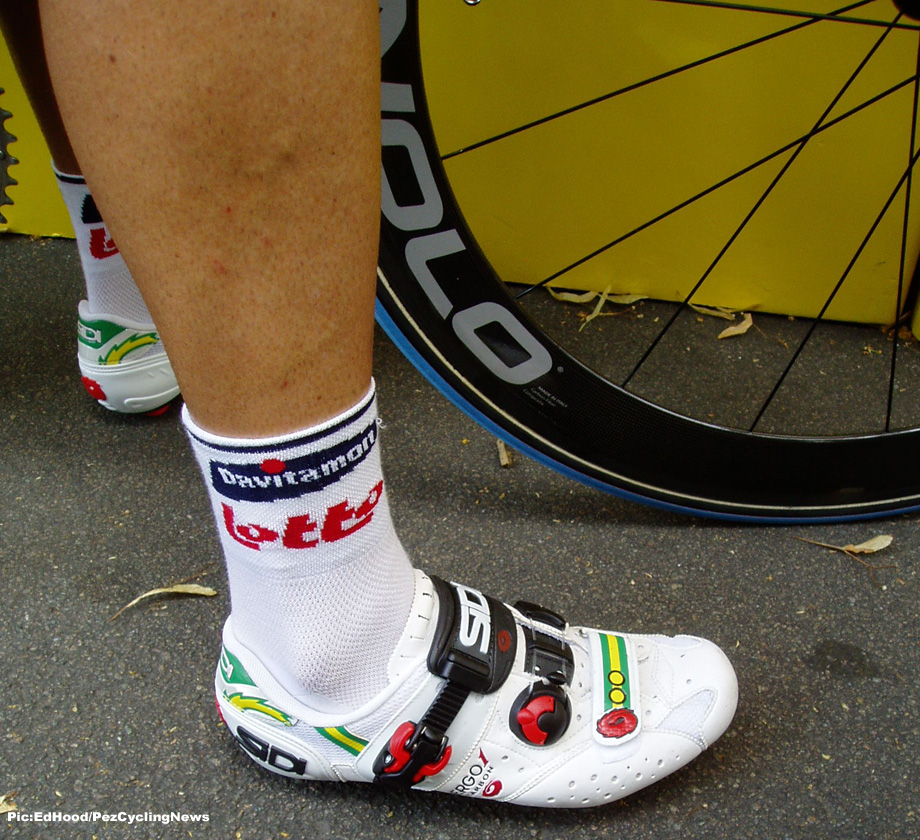 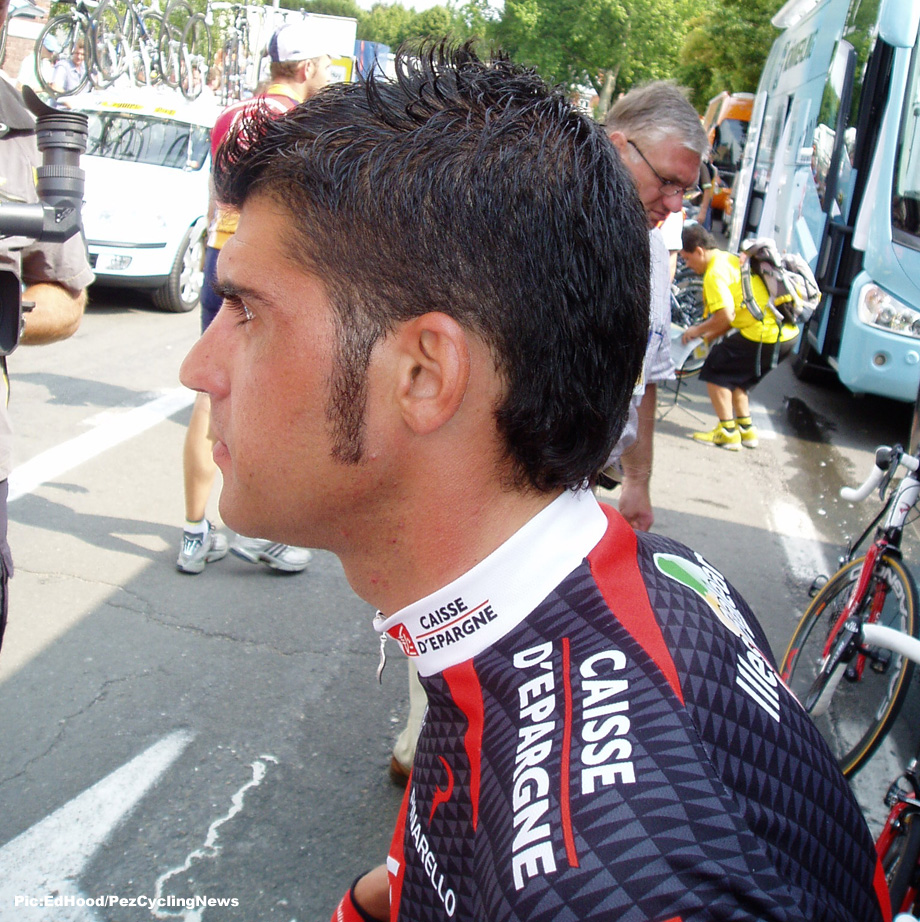 I took this picture of Spain’s dapper Oscar Pereiro on account of his cool side burns and gel job for a ‘style’ piece I did – little did I realise that it was a picture of that year’s Tour winner. 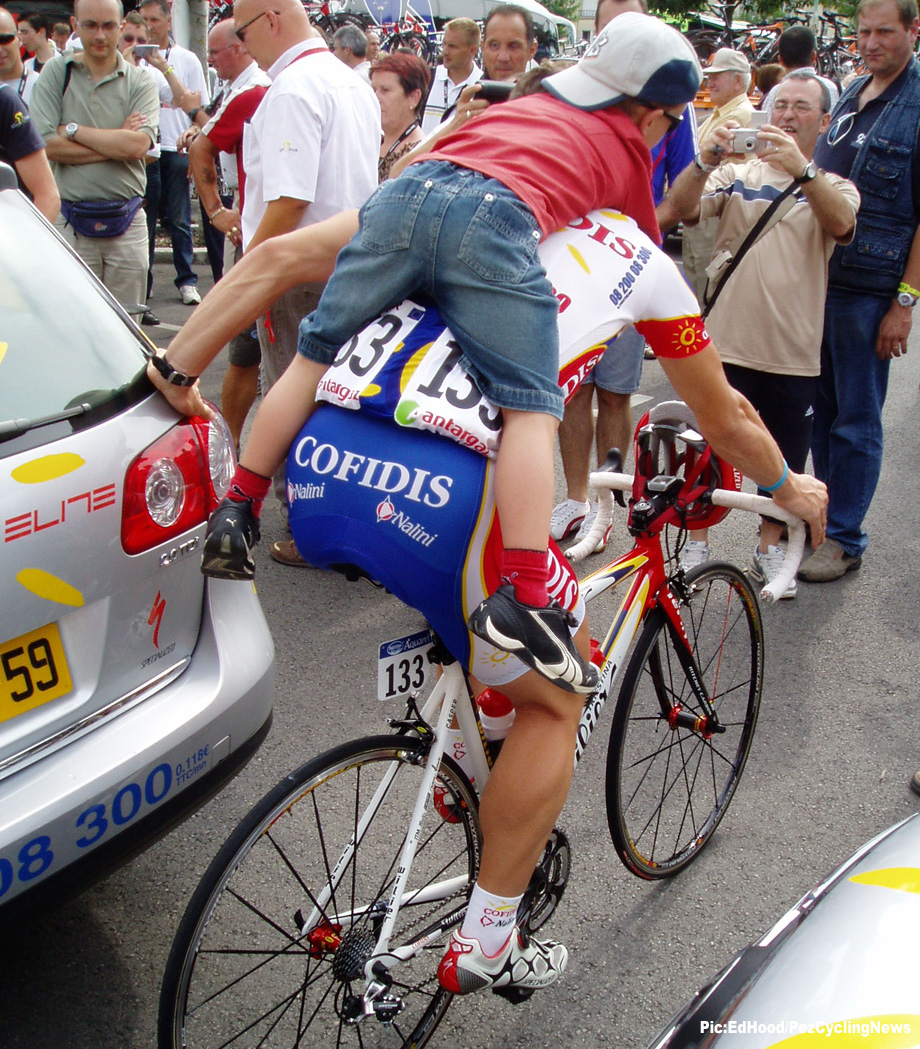 Popular opinion was that flamboyant French fast-man, Jimmy Casper was past his best by 2006; he proved them all wrong with a beautifully timed effort to win Stage One – he didn’t have his son on his shoulders at the time, though. 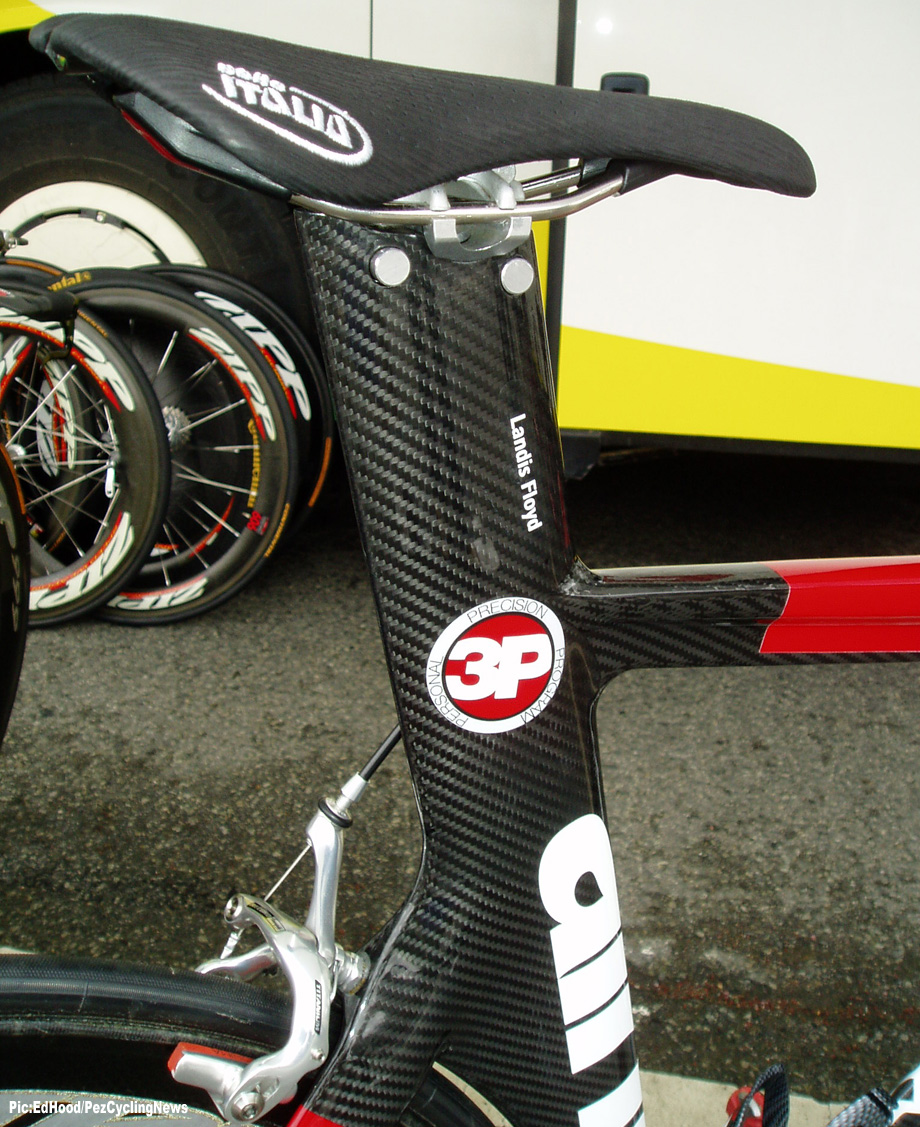 BMC’s ‘Time Machine’ is one of the nicest TT rigs around – a decade ago they looked like they’d landed from Mars, so cool, so futuristic. This one belonged to a guy called Landis . . . 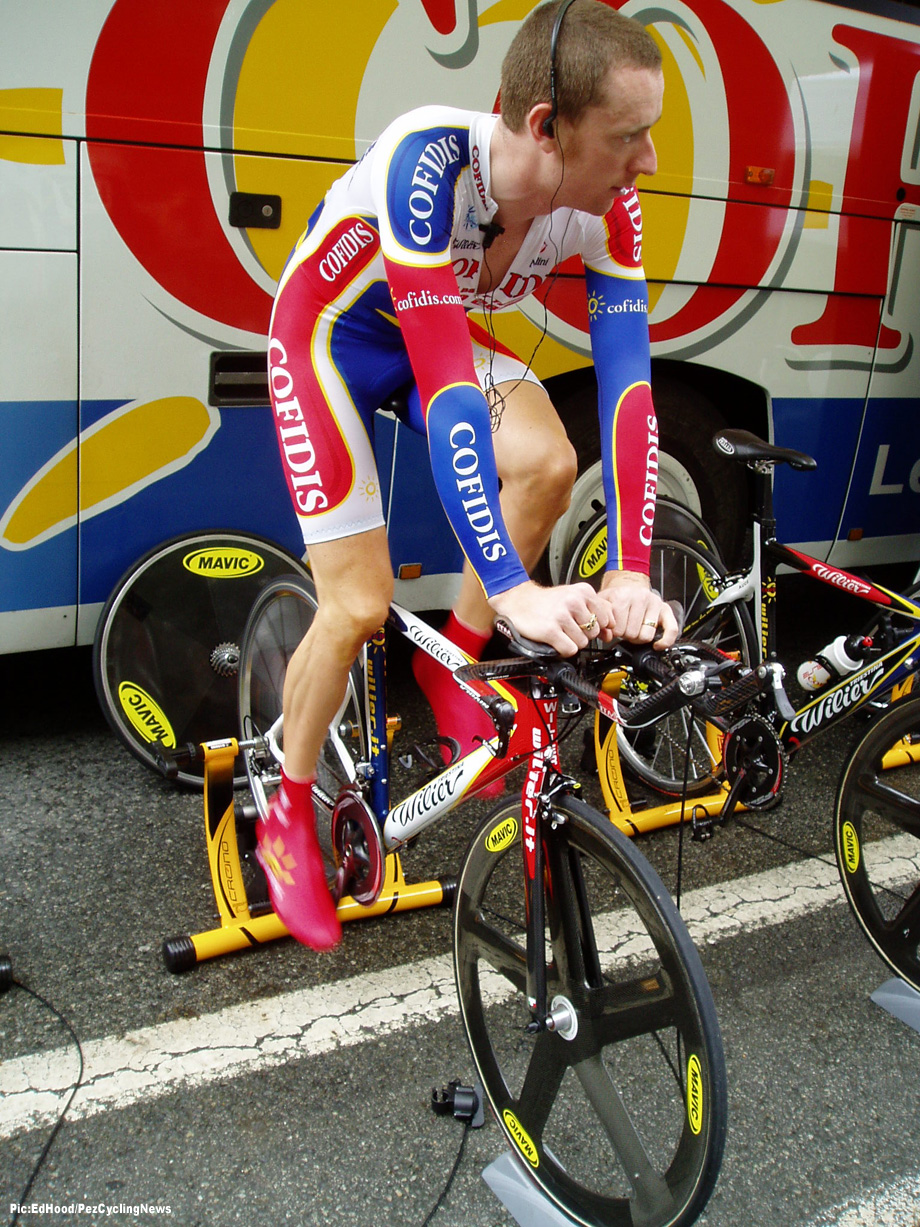 And there was a London lad named Wiggins rode that Tour for Cofidis; I wonder what he’s doing now ? 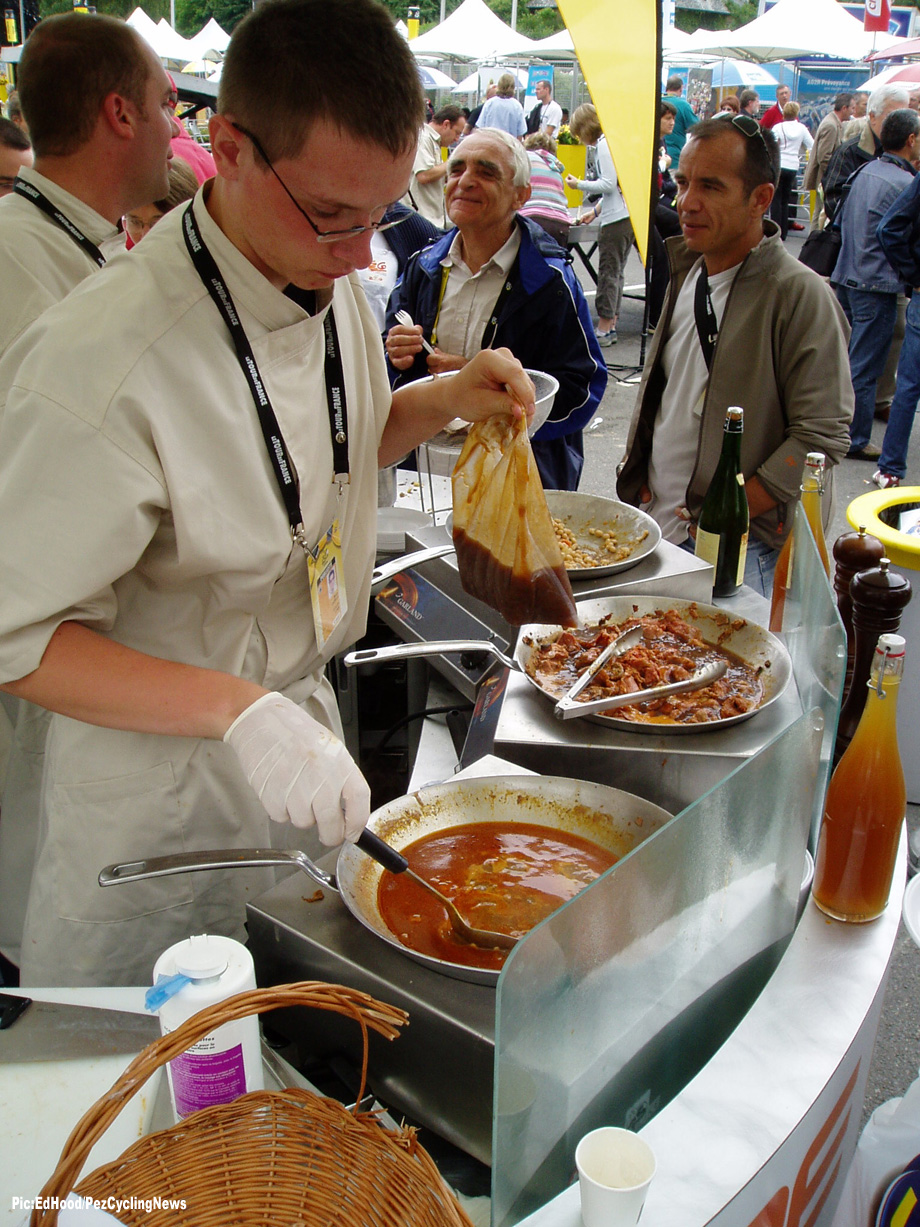 Breakfast in the Tour Village is always nice – but I think I ‘passed’ that morning – I didn’t like the look of those plastic bags . . . 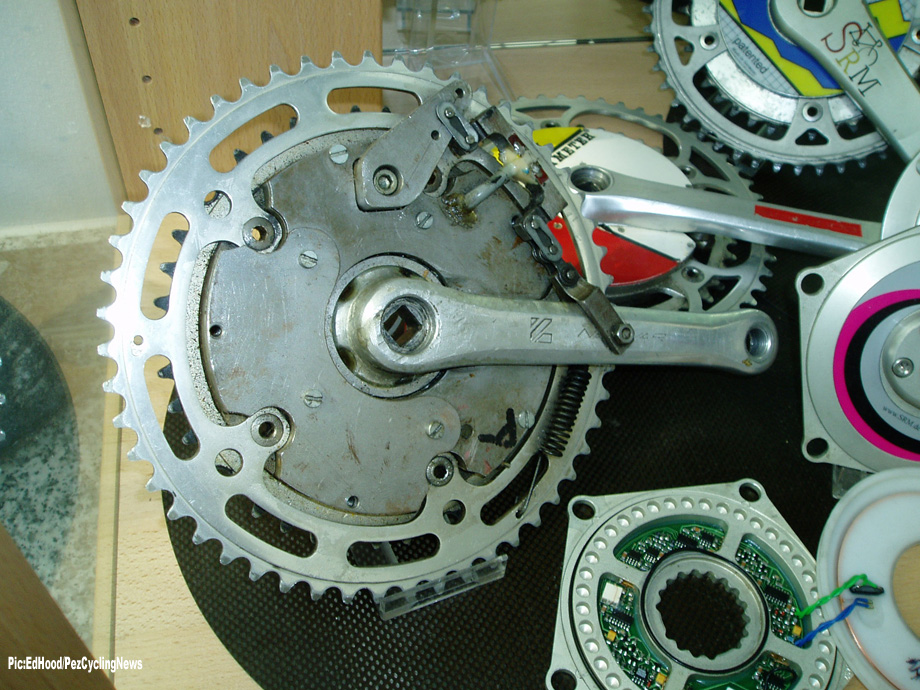 Another highlight of the trip was a visit to the SRM power meter factory to meet and interview the founder, Uli Schoberer – cool guy with good taste in wheat beer and pizza, as I recall. The design has come along a wee bit since 1986, though.

David Millar was back from the Wilderness and on board a very cool Scott TT machine – those Scott airbrush boys were great with the ‘trick’ paint jobs, back then. 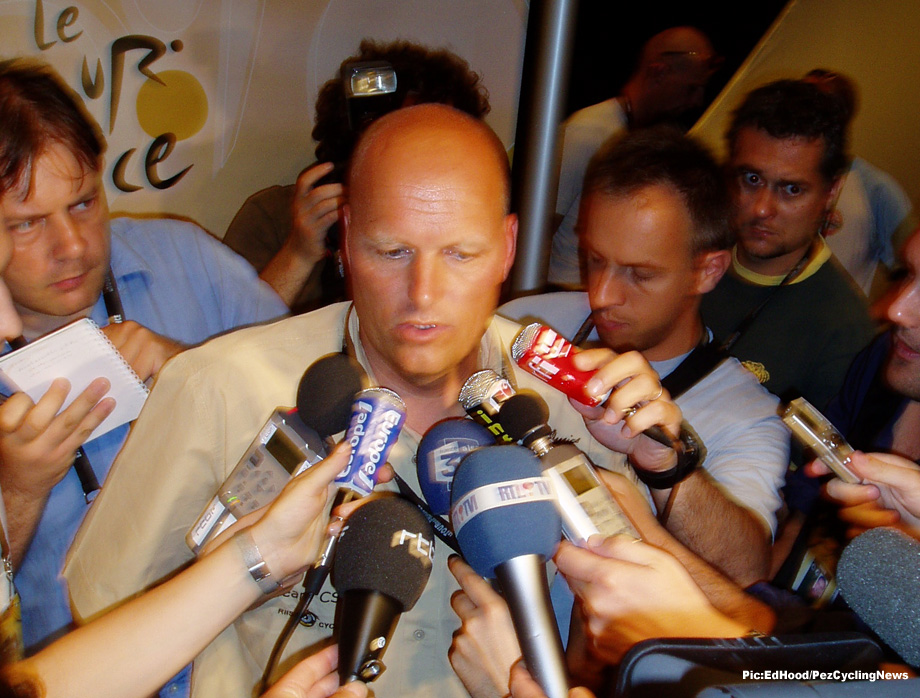 David was back but others were heading in the opposite direction, out of the race; Ulrich, Mancebo, Sevilla, Bottero – and Basso. All out after the Operacion Puerto tidal wave hit the beach.

Please forgive me for this shot of CSC head honcho Bjarne Riis announcing Basso’s departure being slightly out of focus, I think there was a guy standing on my head at the time – it was that crazy. 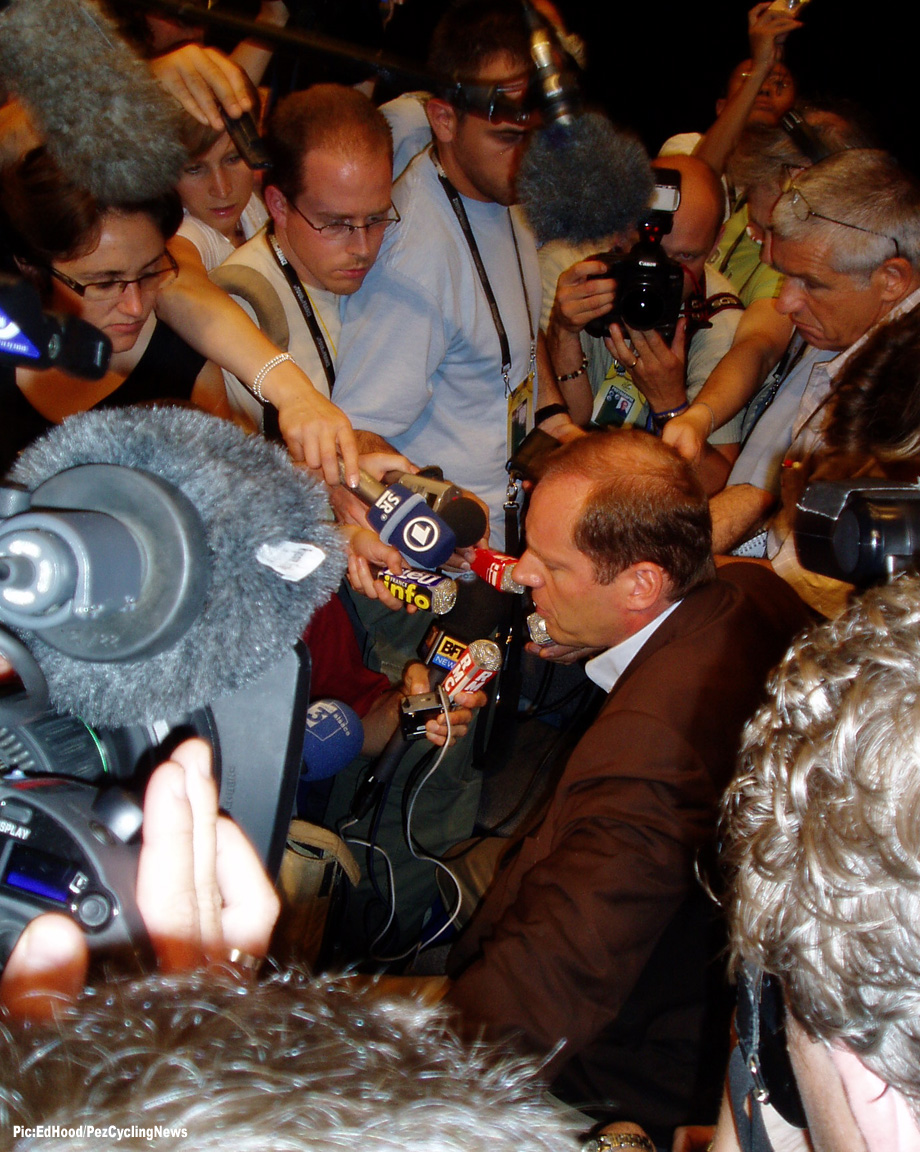 If the race press conference was nutty, the Prudhomme was sheer pandemonium – I remember thinking; ‘I wonder if it’s like this every year?’ 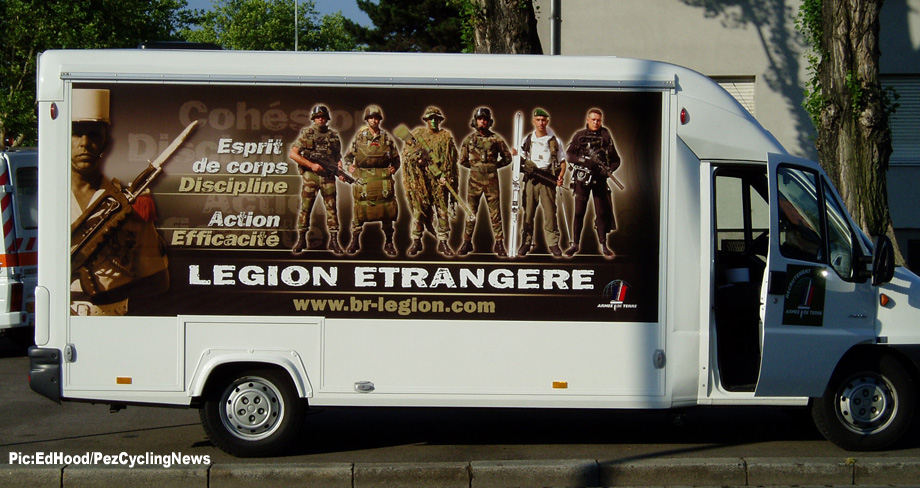 There was a Foreign Legion recruiting office on the prologue parcours and I remember suggesting to PEZ that we could help Ulrich, Basso and the rest by suggesting a change of career for them; he didn’t go with it – but none of us knew just how bad it really was and none of those guys would ever be able to set their lawyers upon us. 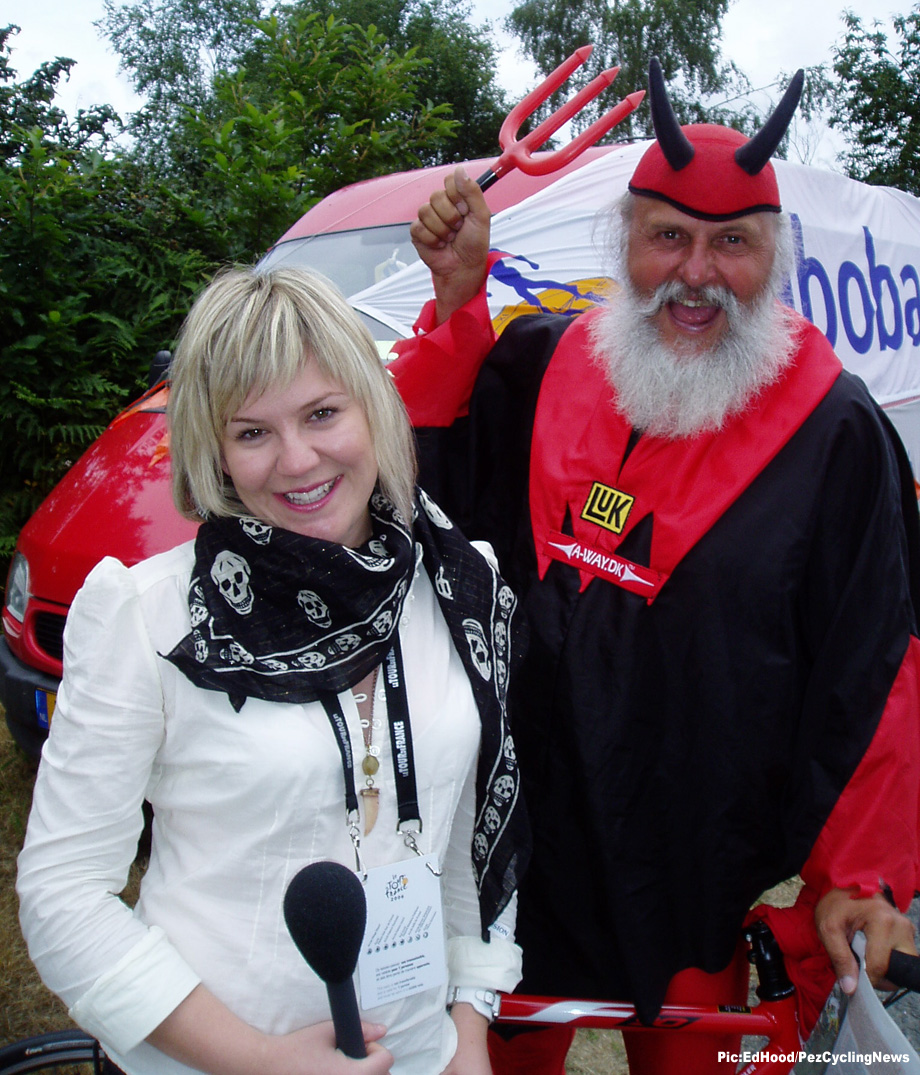 But for all the scandal and craziness, I had the time of my life on that race and learned so much. Didi was in his pomp back then, the original ‘crazy,’ here he is with Cycling TV’s lovely Becky; happy memories from the roads of France and the world’s greatest – if somewhat flawed, that year – bike race.