Two races in Belgium at the week-end, so we put Ed Hood roadside in Flanders, and he was in his element. Cobbles, riders, fans, bikes and beer; all you need for two full days of Flemish fun. Although it was a sober Ed who walked stunned out of a bar after Saturday’s Het Nieuwsblad debacle!

There aren’t many fairy tales in cycling; but when one rider is out numbered three to one by riders from the strongest team in professional cycling and then wins – it does have the ring of Hans Christian Andersen to it. Ian Stannard (Sky & GB) rode a terrific race to win but it has to said that the Quick-Step trio of Stijn Vandenbergh, Niki Terpstra and Tom Boonen displayed stupefying tactical ineptitude. 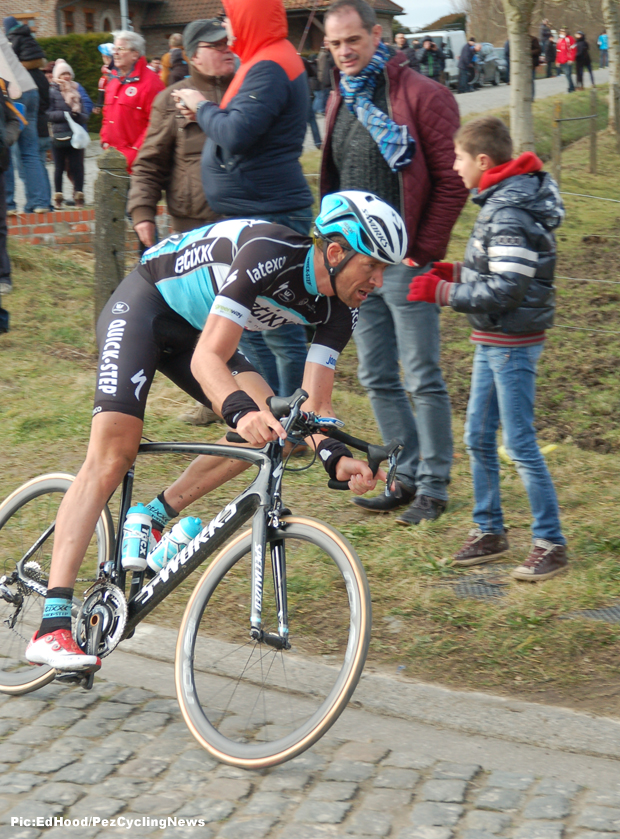 * Why did they give Stannard a free ride for so long – shouldn’t some of Vandenbergh’s bestial strength been used to attack Stannard and force him to work rather than just dragging the other three across Flanders?

* Why didn’t Terpstra attack Stannard before Boonen did, again to make the Englishman work, then have Boonen go?

* Why did Terpstra lead the sprint out?

It’s not often I walk out of a bar stunned but without having touched alcohol – I did on this day. What should have be Boonen’s re-confirmation turned into a disaster. I wouldn’t like to be on the receiving end of Patrick Lefevre’s tongue, that night.

But let’s start at the beginning – the ‘phone rings, it’s Viktor, there are no pleasantries; ‘what’s the weather like out there?’ he barks. 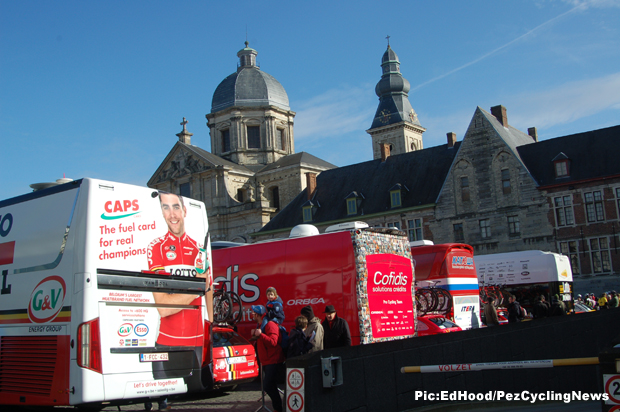 He did get that wrong but he did have a point, it’s the cold, wind and rain which make the difference between a hard Het Nieuwsblad and a totally savage one. Today is chilly and there’s stinging wind but you really need rain/sleet/snow to ice the cake and swing the advantage to the Hard Men. Perhaps it’s not hard enough for Stannard to win today? 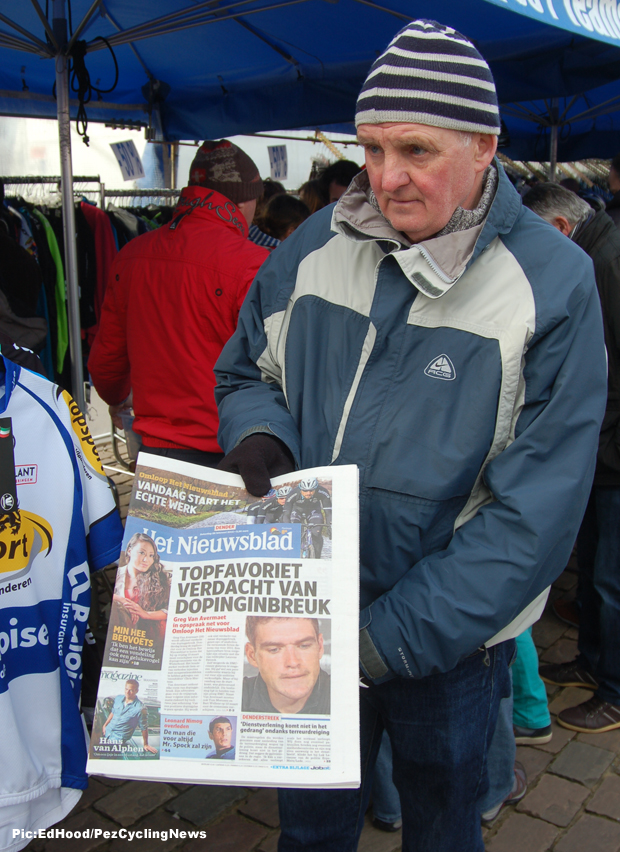 And on the subject of Het Nieuwsblad 2014, the runner up – and another of the tough guys – Greg Van Avermaet was making the headlines for all the wrong reasons, this morning. But we’ll not go into that. 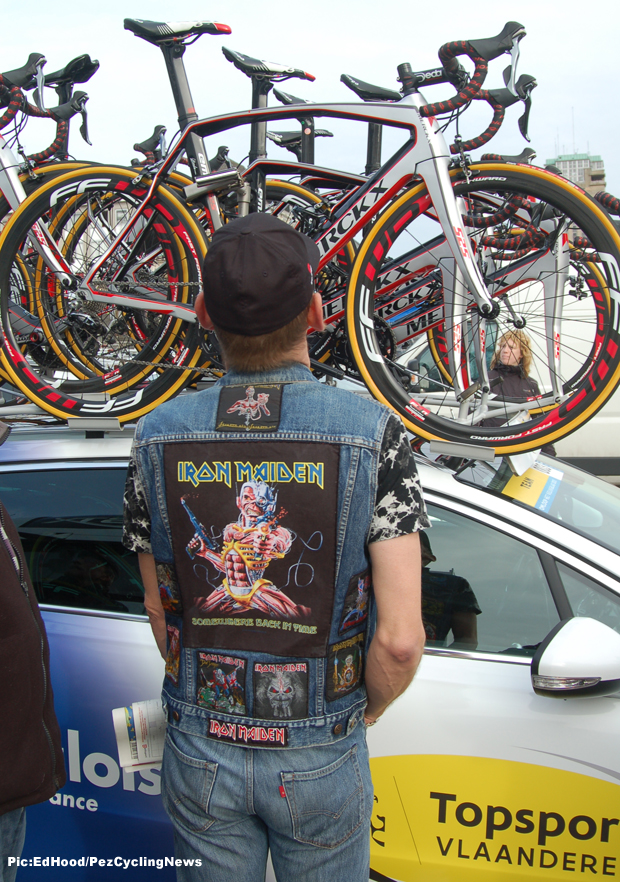 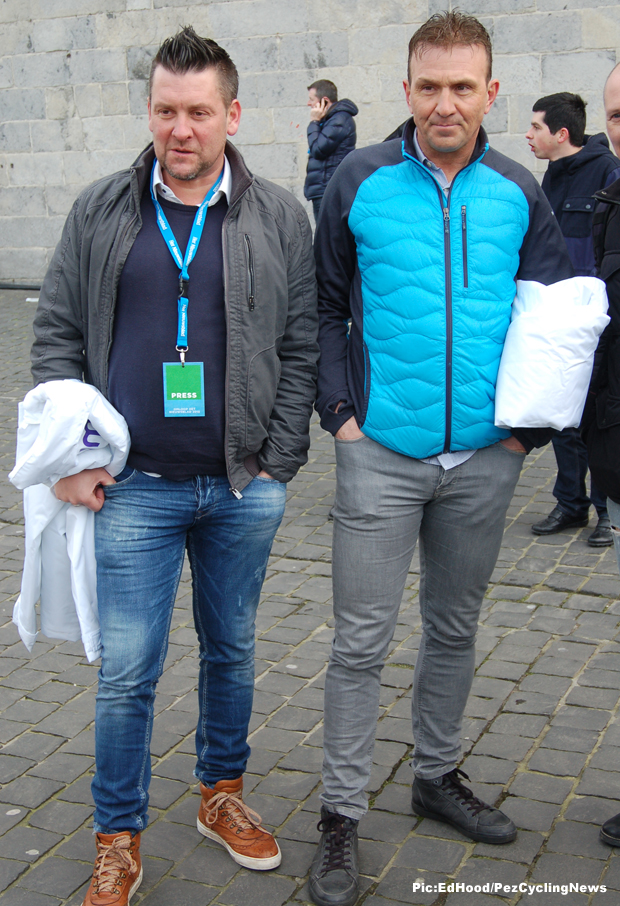 It’s business as usual at St. Pietersplein with even the heavy metal fans checking out the new hardware; and there are familiar faces from the past – Johan Museeuw still looks good but Nico Mattan always did like a beer… 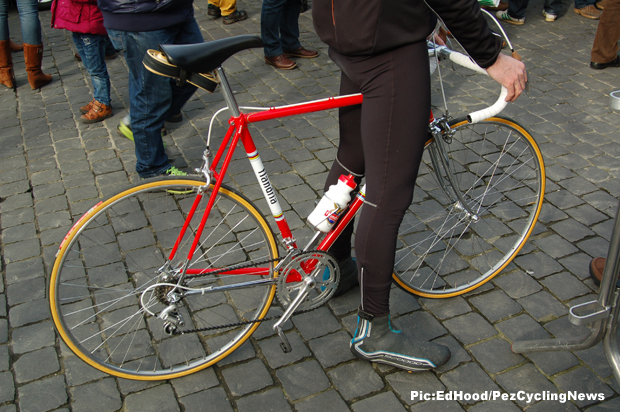 And good to see a proper retro machine with full 70’s Dura Ace and even a Flandria bottle in the cage. 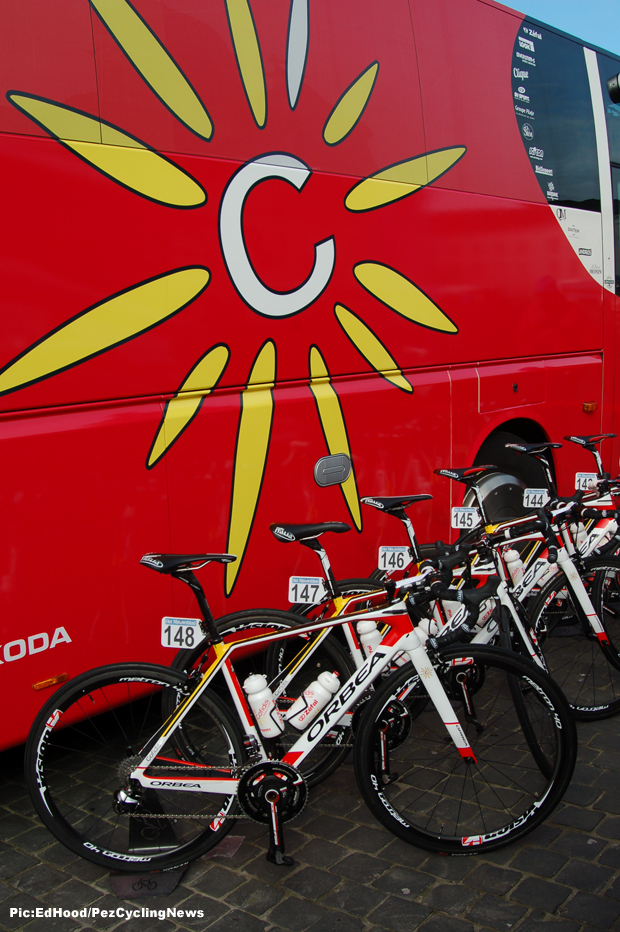 There are new allegiances on display, too; after years of loyalty to French frames, from MBK to Look, Cofidis have crossed the Pyrenees and joined force with the Spanish builder so long associated with Euskaltel – Orbea. But the 11:35 roll out is looming and if we’re to beat the traffic mayhem we best bolt. The crossroads at Oosterzele is our first vantage point, 30 minutes in, the sun is out but it’s cold and the wind sharp is as sharp as a scalpel.

Six are clear by around 1:30 with two in between; the peloton is gutter to gutter and there’s no panic back there. 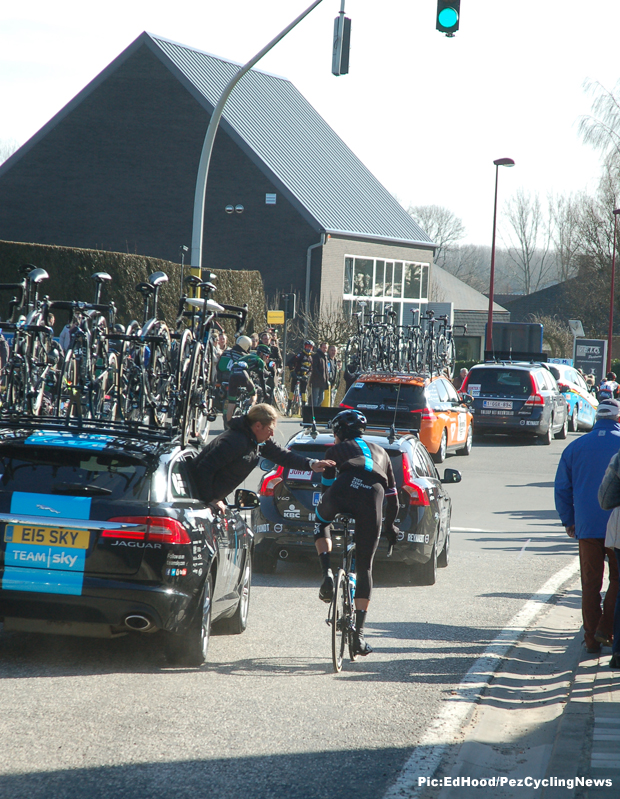 Meanwhile, Sir Brad is back at the car; “this wind is playing hell with my beard, Rod!”

The Leberg, two hours in and the six desperadoes have 6:40 on the sheriff’s men with stubborn Sean De Bie still in no man’s land betwixt break and bunch. 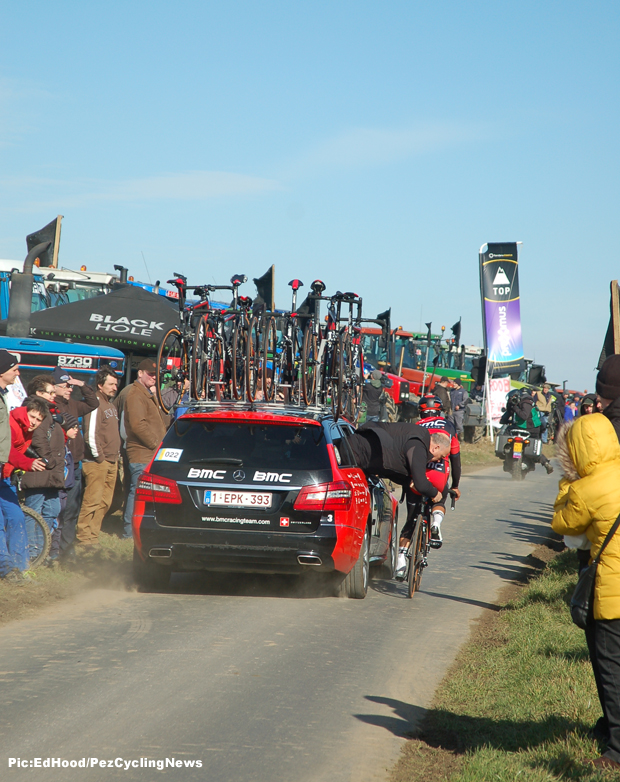 Stone last, with a mechanic hanging out of the team car to tend his bike is Greg Van Avermaet – it’s not his day…

At the top of the climb there are around 100 tractors parked up; it’s a demonstration about the fact that naturalists are imposing restrictions upon the men in rubber boots to protect the flora and fauna making it ever more difficult for farmers to till the soil and make a living. 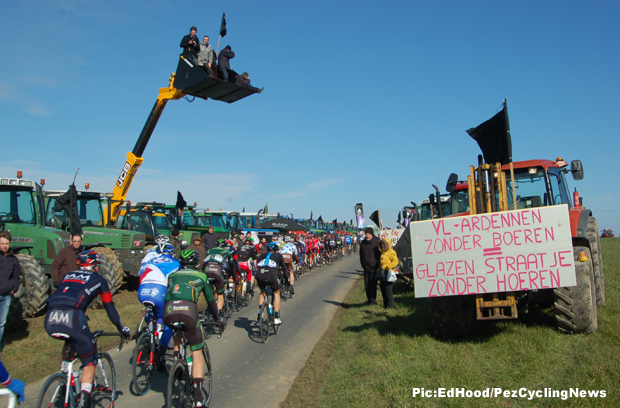 On one banner asserts that the Flemish Ardennes without farmers would be like Gent’s red light district without, well, let’s call them… “Ladies.” A group of intrepid fans have taken to the bucket of one of the farmer’s rigs to get better pictures – it must be damn cold up there.

Next up it’s Zegelsem at the end of the Haaghoek cobbles – a roller coaster on granite sets. The first pass they go left up the Leberg but on the second it’s straight on and through Zegelsem with the third pass taking them up the Leberg, again. 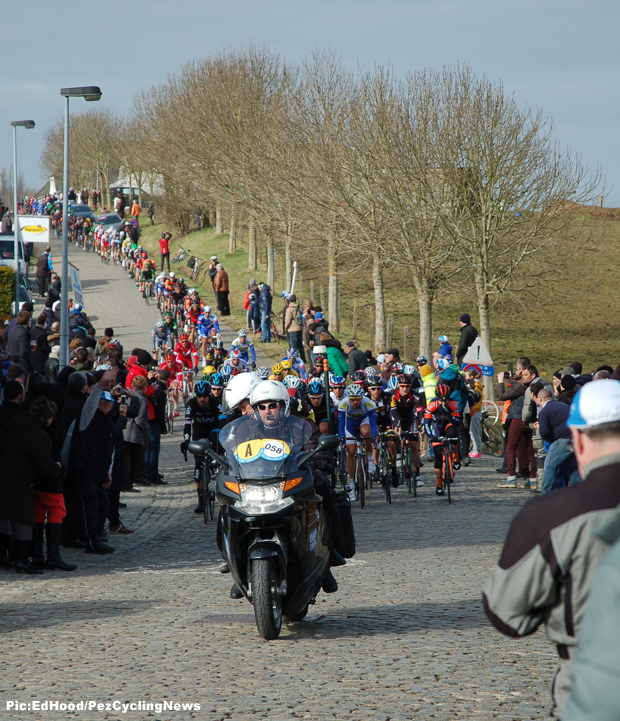 Pass two on the Haaghoek sees the break’s advantage halved as the peloton turns the knob up to 11 – SirBrad leads a group of perhaps 30/40 riders with a single file ‘tail’ dangling behind. Desperate men are fighting for their place in the line, some are trying to sneak up the inside, out of the wind and come perilously close to our toes as carbon rims ‘clack’ on the ‘kasseien’. 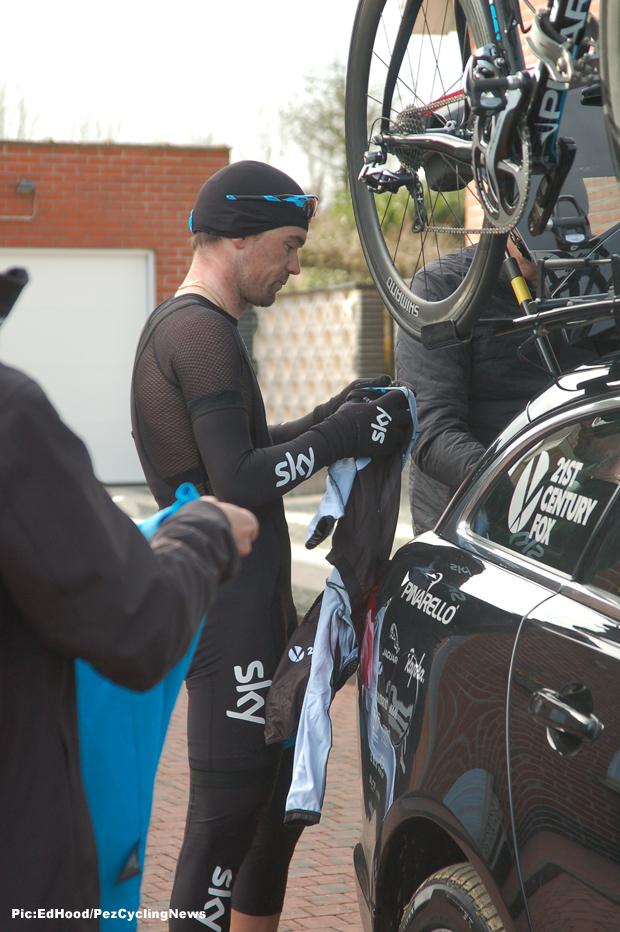 Sky’s CJ Sutton – a previous winner of Kuurne-Brussels-Kuurne calls it a day, glad to get into dry clothing and jump in to the back of the car. We follow suit and jump in the Hyundai, it’s cold out there.

The third pass with 40 K to go sees the race really take shape as they head up the Leberg again, the break has evaporated and Boonen and Vandenbergh force it at the head with Stannard well there. 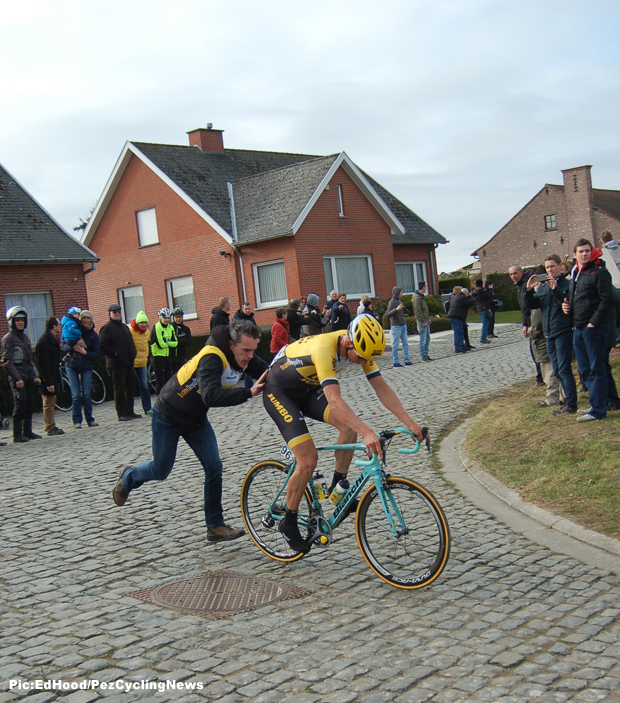 Winner from two years ago Sep Vanmarcke (Belgium & LottoNL-Jumbo) punctures going in to the corner and has to change a wheel – life is going to be difficult for him. 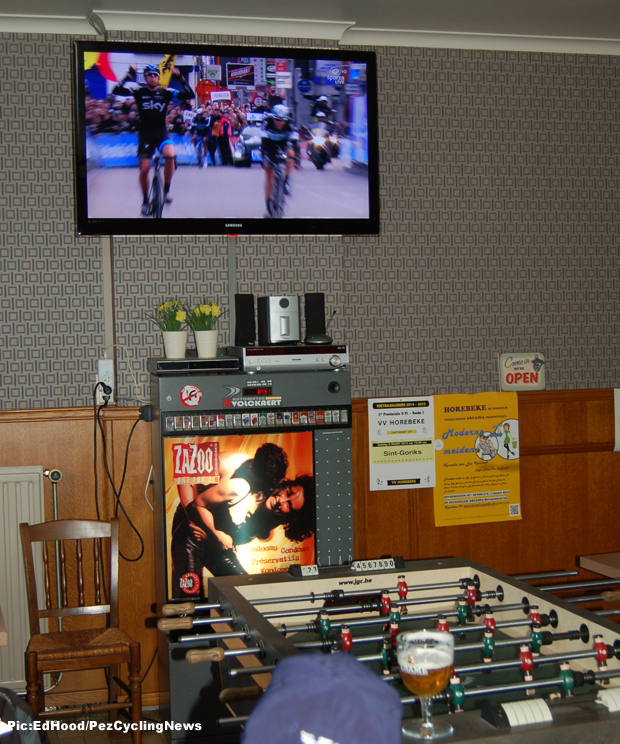 The bar t’Gaalke is where we watched Ian Stannard dismantle Greg Van Avermaet last year. But with 40 K to go it looked bleak for the genial former British champion with Quick-Step holding all the cards. It did puzzle us as we watched Stijn, Niki and Tom ride themselves inside out as Ian sat quietly in the slipstream; “when are they going to start jumping him?”

And when they did, it was Boonen who went; why not test Stannard out with a Terpstra attack first Although Niki did look a tad worse for wear in the finale. As confirmed Boonen fans we had wanted him to add the only one of the cobbled races which doesn’t appear on his palmarès. But that said Stannard’s ride was about as fine a piece of bike riding as I’ve ever seen.

En route back to Gent we stopped off at the Ronde Van Vlaanderen Centre shop in Oudenaarde to look at ever more over-priced goods that no one really needs – ‘Molteni’ socks? Come on! 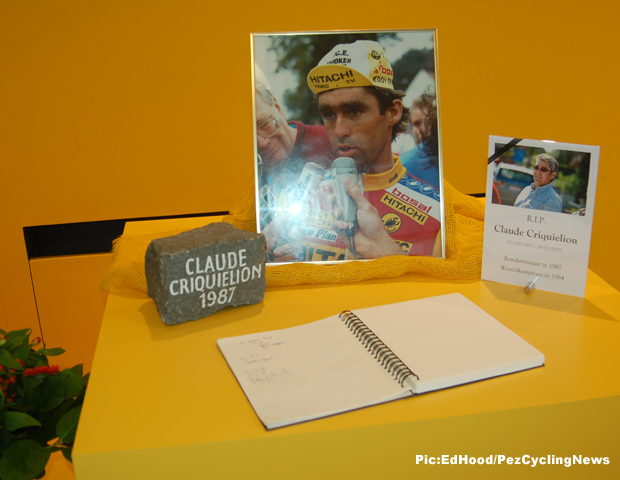 However, we did like the wee tribute to Claudy – rest in peace, Monsieur Criquielion.

Skelde: “A season of ups and downs so far”