The Gent Six is a Mecca for lovers of track racing. Apart from cyclocross, the cold months of November can be a barren time for cycling aficionados in northern Europe, for many the 6 day circuit is the more comfortable option and the Belgian city of Gent is so handy for bike fans in the UK. Here’s how two Scottish Iljo Keisse fans made their annual sojourn to the small, intimate track of the Kuipke.

John Anderson and David Martin of The Bicycle Works in Edinburgh are no Gent 6 virgins and know the score when it comes to watching the action on the boards and in David’s case going quite fast on them also, as he has won many track medals at National level in Scotland. 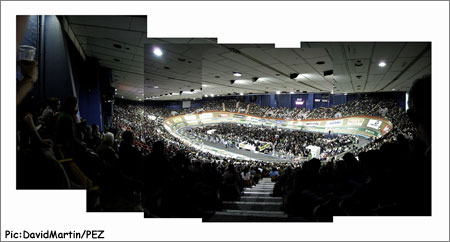 The view from the gods.

Friday
Their Friday night could have been a non-starter, as after an early start from Scotland, a plane from Prestwick, and a hire car from Charleroi for the run up to Gent, the duo had no tickets and Friday is known to be a sell out. Not to worry – a friend has done a bit of “dealing” and tickets will be available from Iljo’s dad, Ronnie, from his famous bar, the Karper, well as soon as his wife goes to get them! 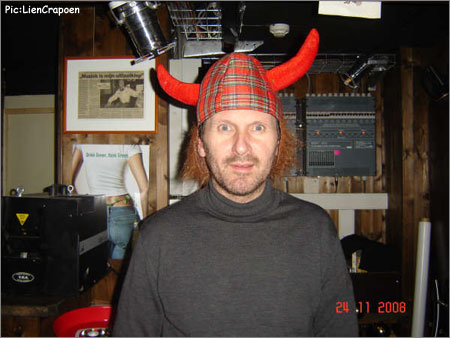 The track at Gent is small and the tickets were up in the gods, but the action is down in the track center and I don’t mean the racing, the center is where you go to be seen and to spot the stars. 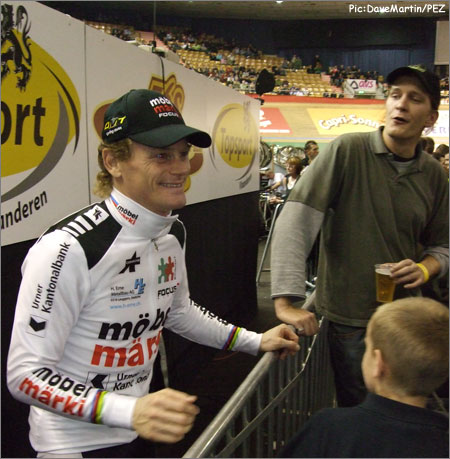 John had managed to get his hands on a Retro wool PEZ jersey on his last visit to Spain from yours truly, this paid off within minutes of entering the pit of the track. He had expected to bump into roving reporter Ed Hood, but had a much nicer surprise when a stunning blond American girl cornered him to quiz him on his smart attire. 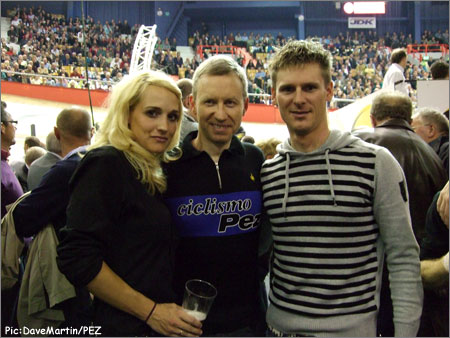 Liz Hatch with her man Tom Stubbe…and some other guy.

She turns out to be Vanderkitten rider and model; Liz Hatch who was in Gent with her boyfriend Tom Stubbe who will be riding for Lotto next year, joining them was Serge Pauwels who will be with Cervelo and Saxo Bank masseur; Jens Tummeleer. As drink vouchers were running at 9 Euros for 5 drinks the canny Scots were glad to accept beer from Pro’s and the beautiful Liz Hatch who was a big PEZ fan. 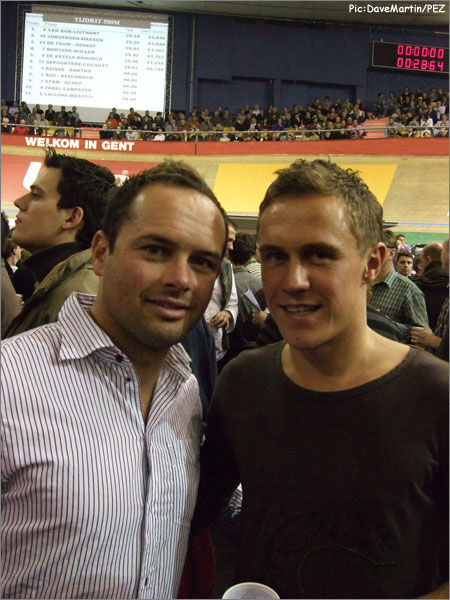 When the night’s excitement was over around 2am the tired lads made a last visit to the Karper for “one for the road” to be told that Iljo wasn’t feeling too good. John and David had been on the go for over 22 hours so their hotel beds were calling. They had been running on adrenalin fueled by bikes, babes and beer – ah the good life. 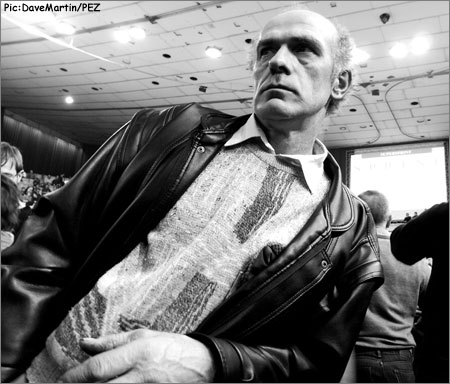 This is a random drunk man.

Saturday
On Saturday you could go to the cyclo-cross in Hasselt, but our adventurers wanted a bit of road race retro action and the best place has to be the Ronde Van Vlaanderen Museum up the N 17 motorway in Oudenaarde. 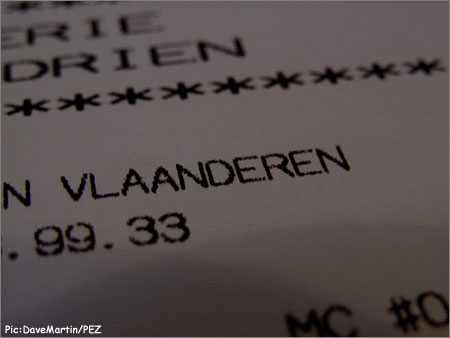 First call has to be to the cafй/bar adjoining the museum for a coffee and a cake before having a good look at the shop with its startling collection of Belgian memorabilia and a book and jersey had to be bought and then signed by the great Freddy Maertens, when he had finished his Spaghetti behind the till. 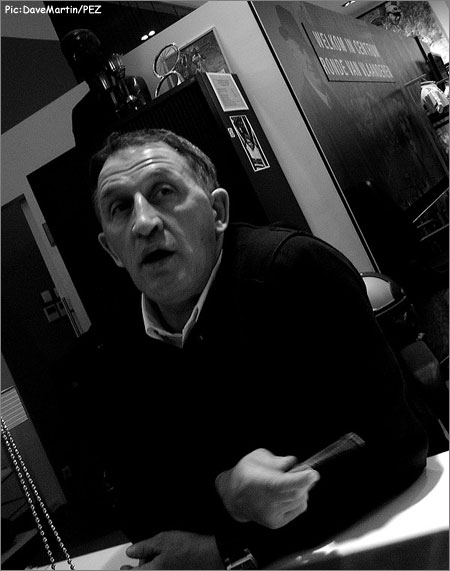 John had to visit Mario De Clercq’s sister’s boutique to inspect the latest from D&G, followed by a nostalgic visit to the Koppenberg where a pair of shoes had been left, (possibly left by Ed Hood and Viktor’s from their last visit to Flanders, the pair were a “no show” at the 6 days!) 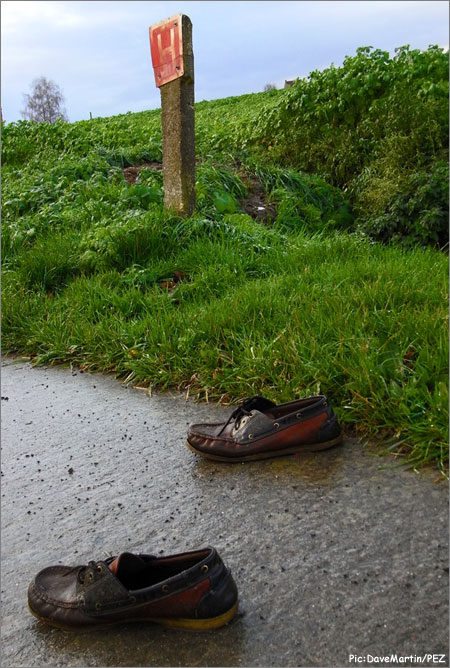 In Oudenaarde there is probably one of the best bike shops anywhere and this is coming from a bike shop worker and owner. Jowan’s on the Kluisberg has all the new kit, bikes and clothing collected under one roof on the outskirts of a very small town. 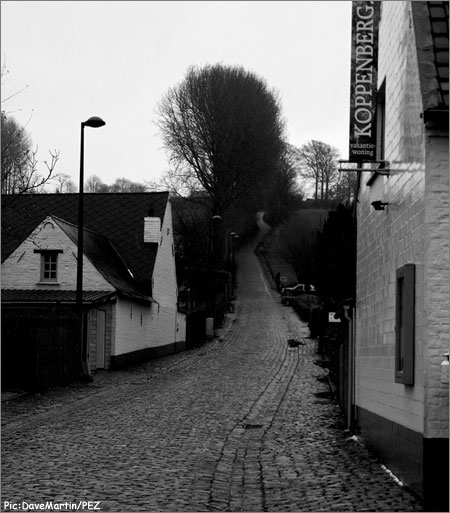 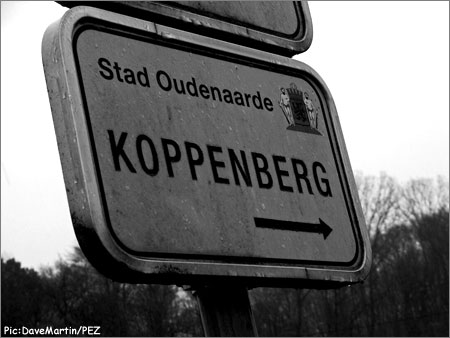 The afternoon was finished off with a baptism party in the Palace Cafй on the top of the Kluisberg. 300 drunken Belgians wetting the head of John’s good friend Natalie’s three month old boy. 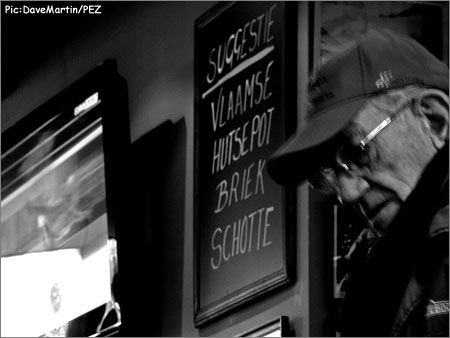 Briek Schotte! Ok, not the guy in the picture, just the name: his memory lives on as ‘The Last Flandrian.’

Back to the track for Saturday night’s entertainment, the tickets had been pre-ordered so there was no panic, except that you had to use your free drink vouchers before 10 o’clock, luckily John and David were now on the PEZ pay-roll and had gone at 9 to soak up the atmosphere in the interests of you readers and drinking in the sights and the beer. 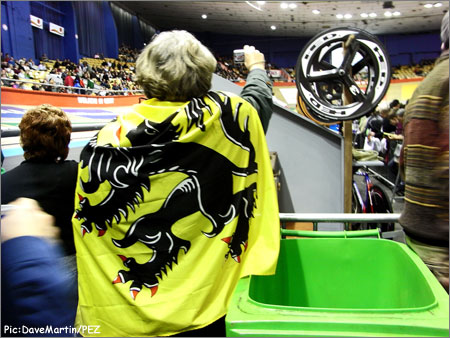 The Derny’s were up and the motorized hero Joop Zijlard was leading local hero Iljo Keisse to a win from four places behind to pip Erik Zabel on the line. If you have never seen Joop he is a class act, with his gold bike, his encouragement of his rider and his continual twitching of his head to check the race situation, it is worth going to a 6 day just to see him race. 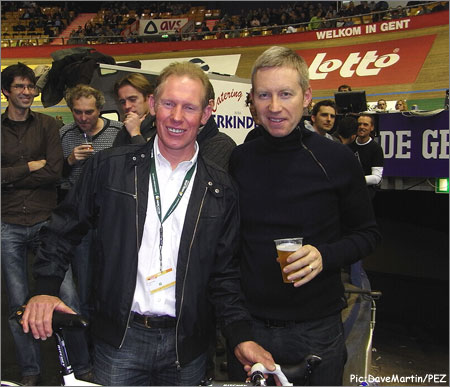 One of Joop’s old partners and winner of many Gent 6’s; Etienne De Wilde was seen with two young lovelies as he was promoting Camoso which is a sportswear manufacturer, he still looked fit and did a lap of honor for his admirers, many were looking at his escorts including our David who managed a photo with them after they had been to see their hero Erik Zabel. The day was nearly over, but a last drink had to be taken at Keisse’s bar before bed at well after 3 am. 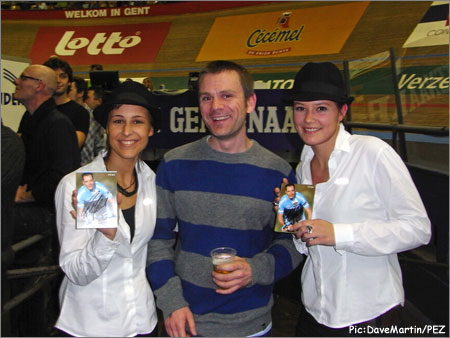 Sunday
Sunday was cold, so after a late rise our two “adventurers” inspected the local Sunday markets, the flower market, the bird market and a general flea market where David was on a failed mission to find old cycling jerseys. 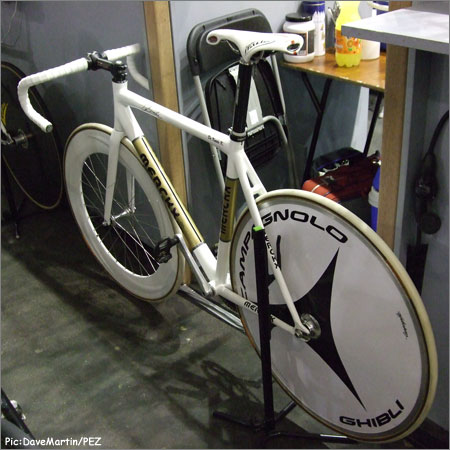 Snow was on the way, so it was to the track for the afternoon session, the Pro’s were to finish at 6 pm and beer and sandwiches were needed to keep flagging spirits high. A certain podium girl named Lien Crapoen was keeping David’s spirits up as he wanted more photos of her. 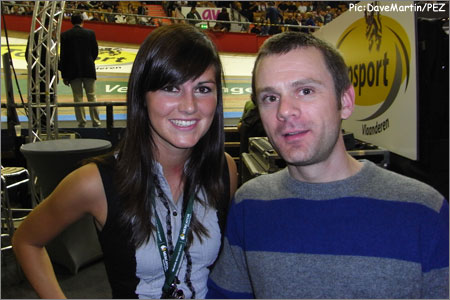 The race was down to the line, three teams were on the same lap, but local boy Iljo Keisse and his partner Bartko went for it even though they had more points. The couple had the crowd behind them and a lap was taken and all the fans were sent home happy. 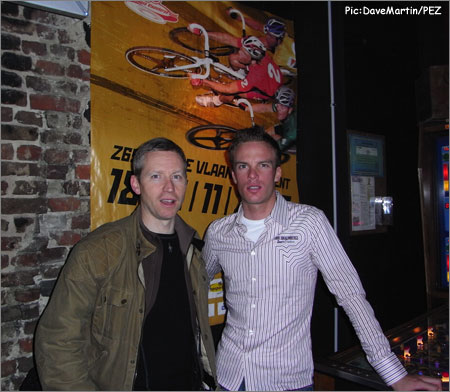 As home was becoming the Karper or “The Keisse Bar”, that’s were John and David had to be, to see the fun from the Iljo Keisse fan club, meet the man himself (looking tired) and become the first two Scottish members of the fan club with membership cards and scarves. 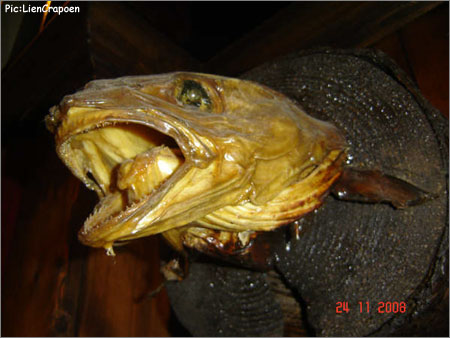 Kenny De Ketele turned up and much to the delight of David so did the Podium and VIP girls, including Lien, it turns out that her boyfriend is Martijn Maaskant of Garmin who was 4th in Paris-Roubaix last year. 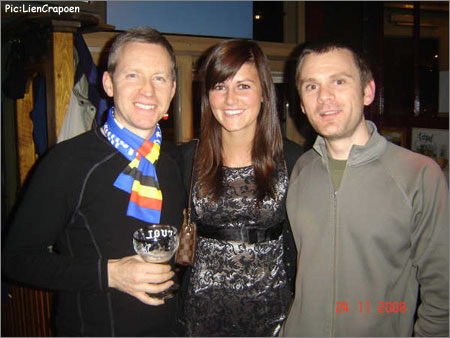 The star of the evening had to be a character by the name of Nic Caan, he was the singer at the track and was very famous in…Gent! He also sold waterbeds and sun beds, with a slogan like “better sleeping, better living” how can he go wrong? But don’t give up the day job! 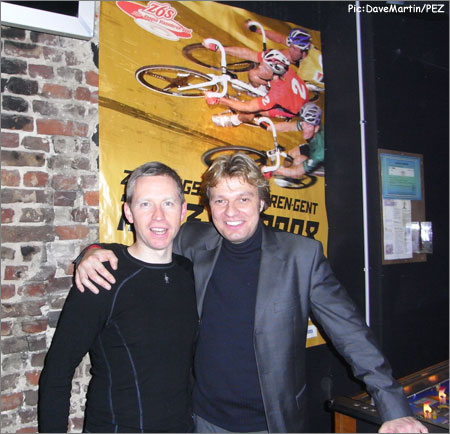 So ended a beer and bike fueled weekend to the sound of 80’s disco/techno/Euro music, it only left our brave men to catch an early flight back to Scotland and recover from hangovers before work back in Edinburgh later that day. 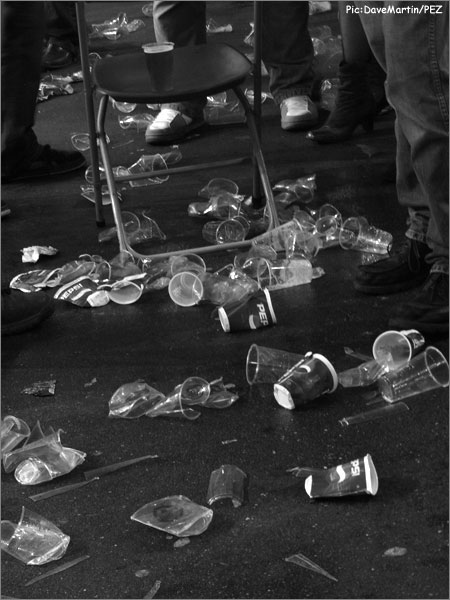 With photos and memories to mull over for another year, John and David have time to save their money and revitalize their livers before next November. Pity the scarves were a year out of date!