We’ve bemoaned our fates as lovers of a dirty sport for a long, long while now. It’s easy to complain and whine and sit idly at the side of the road. Bike Pure hopes to do something about cleaning up the sport, and is trying to make a difference. Let’s take a closer look at the organization.

PEZ: Ok, first off, what is Bike Pure?
Our official strapline is ‘An umbrella organization for riders, teams and supporters, whose sole mission is to protect the future and restore the integrity of professional cycling – through only positive measures.” In reality we’re just cyclists looking to help cycling! 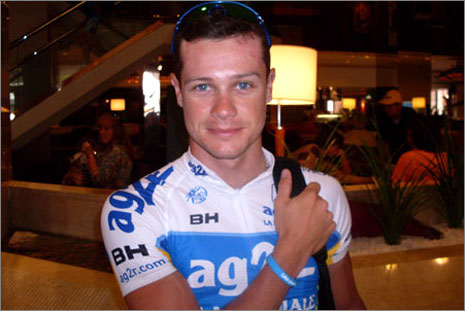 Always a PEZ favorite, Nico Roche, is a staunch supporter of Bike Pure.

We are an independent, non-profit organization and work in our own time, voluntarily. As we grow and our core membership increases, we could well be doing it full time in the not too distant future. Our campaign is growing daily which proves Bike Pure has hit a chord amongst cycling fans worldwide who want to see change, for the better.

PEZ: So, who are you?
We are two (former) racing cyclists who became fed up with the doping scandals destroying the image of our sport and really felt we needed to try and do something about it. It began with just Andy and myself and now we number several thousand in more than 70 countries. We are astonished at the growth we have achieved in such a relatively short period of time.

PEZ: Why was Bike Pure created? What is the story behind its creation?
We felt the clean professional cyclist had no voice. The constant and sadly regular doping headlines were destroying our sport – ‘headline by injection’ we call it. Every cyclist we met and spoke with thought enough was enough. The UCI/WADA were doing their best, but the Bio-Passport program was fast becoming a butt of jokes.

We thought about forming a group where every cyclist who wanted to protect their sport had a right to be heard. Cycling as a sport is bigger than the individuals and riders who represent it and we want to help our sport. We can either ignore the problems in our sport, or work to bring about change. We also felt there was no platform for the fans to show their disgust in the dopers. Bike Pure gives everyday cyclists and pros a platform to say that they are opposed to doping in cycling and that they want a better future.

It went from a thought to an action plan in the Summer of 2008 and to a campaign movement after the World Championships in Varese, Italy.

PEZ: How are you promoting it?
We really hope to make an impact and induce change. The organization was mostly web based at www.bikepure.org but as we have grown all forms of media have embraced us. I think people in the sport are searching for something positive. We have our ‘blue’ revolution where we have headset spacers and wristbands as the mark of a rider who supports bikepure’s goals. 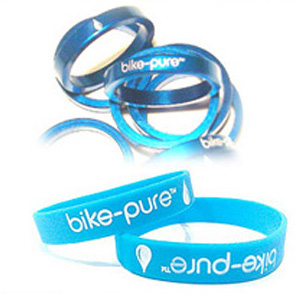 Simple yet significant. Understated is good.

We hare using Twitter as another element to get regular news updates across. We haven’t had much coverage in the written cycling magazines – we feel Bike Pure is a very worthy news story. We understand that some magazines get tired of covering doping stories, yet we are anti-doping and there’s a big difference. Everybody connected with cycling has a part to play in the fight against doping and that includes the major magazines and its journalists who can play a major part. 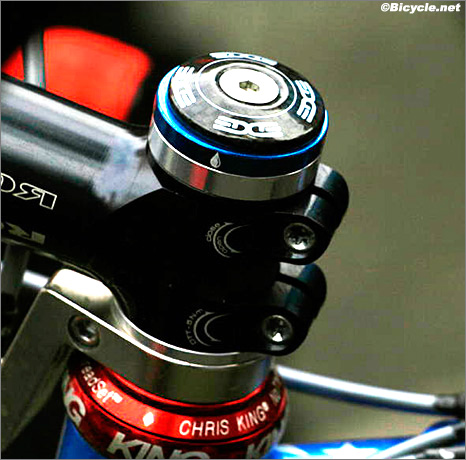 PEZ: Are the riders taking an interest? What riders are Bike Pure?
They are, we have five current world champions on our books and it is great to see riders concerned in protecting the sport. Being with Bike Pure doesn’t mean those not signed up are using drugs, it means a rider has gone that extra step to admit there is a problem within the sport, and are willing to do something about it. 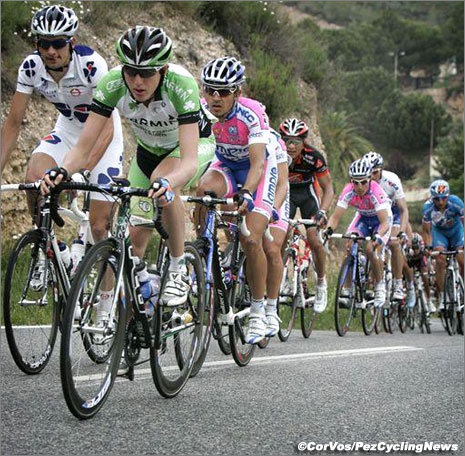 Daniel Martin, fresh off his 2nd place overall at Catalunya, is a Bike Pure rider. 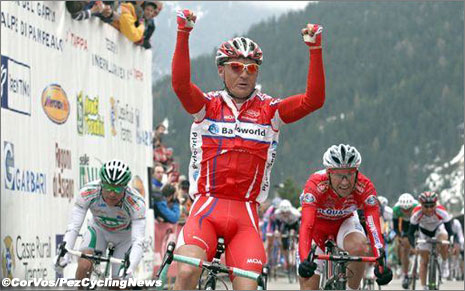 PEZ: What about the industry? I see you have some equipment sponsors?
We hope the cycle trade will support and help to fund Bike Pure. After all if we can be an element in resolving the sports problems, it will be good for cycling and sales. We are a not for profit group, but have overheads as we don’t charge the riders anything. We don’t want anything to stand in the way in making their commitment to Bike Pure. 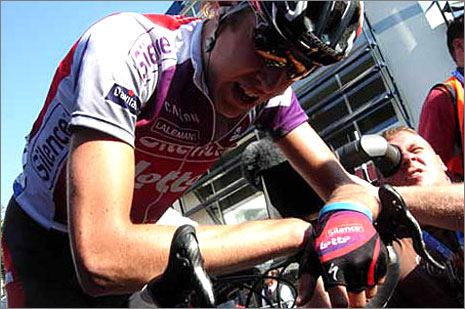 Olivier Kaisen recovers from a hard day at the Tour of Turkey, and a certain blue band is visible.

3T have come on board with their fantastic Bike Pure stem for which we get a dollar from each sale to help our cause and the guys at Blackbottoms.com have designed a really great cycling jersey as a lot of our members wanted to promote the campaign and tell the world they are behind a new era of bike racing. We managed to get several sponsors to help support the jersey, 3T, Chain Reaction Cycles, and Aspire VeloTech – all of whom share in our philosophy for a cleaner sport.

Bike Pure have come up with a quality design for their first jersey.

PEZ: What are your plans for the future?
Although we are delighted to have such a large membership, we are only scratching the surface regarding all concerned cyclists out there. We hope to grow and have a positive impact in the promotion of clean – real riders. We have also launched some proposals entitled CycleSport 2.0. We have a broad, very experienced mix of members from all elements of bike racing and are collecting popular, workable recommendations that will improve our sport. Bike Pure is about structured repair and we hope that this workable document will go towards that. Anti-doping isn’t all about tougher sanctions, there are a whole host of measures that need to be implicated, a merging of all ideas if you like. We will present these recommendations to the WADA, UCI, teams, race organizers and national cycling federations at the end of the 2009 season.

PEZ: What do you see the current state of cycling as?
It’s improving but has a way to go. Bernard Kohl’s recent admissions are welcomed but if the guys want to cheat, they will cheat. Human Growth Hormone taken outside competition is undetectable. Blood doping is commonplace it seems. We campaign for the UCI to be more transparent. Part of the problem is the air of secrecy, which breeds rumors of corruption and negativity.

The sport has changed dramatically in the last 15 years, average speeds have risen, riders are climbing cols at ‘gravity defying speeds’ and the scientific evidence coming from leading doctors and phycisians defies natural human ability itself. There is still also a worrying reluctance by certain elements within pro cycling to completely dismiss doping and be totally outspoken about it. Why wouldn’t you be outspoken about doping? There needs to be complete openness from everybody within the sport. Previously convicted dopers, or anybody outspoken about doping is automatically ridiculed by certain factions within the sport and this is surely wrong. There has to be a turn around in how anti-doping is reported. The UCI and the WADA can learn an awful lot from former dopers and we feel they should be listened to. 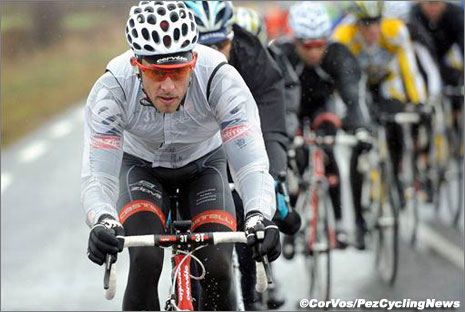 Another PEZ favorite, Dan Fleeman, is a Bike Pure rider.

PEZ: Thoughts on recent positives, potential suspensions?
We feel the delay between a rider providing a sample and implementation of bans for positive results is killing progress. We had to wait six months to hear about Rebellin’s positive for CERA at the Olympics. In that time he ‘steals’ three victories in early 2009. Stealing the podium and prize money along with a little more of our sport’s repututation.

PEZ: How does Bike-Pure hope to improve the state of cycling?
We are pushing for the implementation of life bans and to rebuild the trust with professionals to both deter the cheats and protect the sport. Already I think we have made a difference, raising questions that need to be asked and producing answers to some that, until now are only whispered. it is hoped that through our Cyclesport 2.0 proposals that we hope to see changes implemented. We are not a solution to the problem, just part of the big picture. We hope to be seen as an organization that fans can have trust and believe in, which is an element that many riders, through their doping, has been removed from our sport.

PEZ: Where are you based?
Our HQ is in Ireland, but we also have area coordinators in USA, Asia, Australia and Europe. More would be welcomed to share the workload and help in our mission. 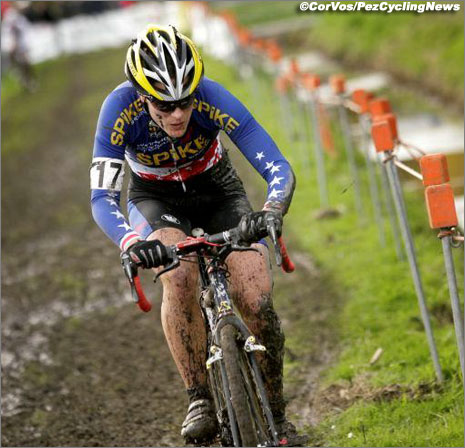 PEZ: How can cyclists become part of Bike Pure?
Simply drop us an email at [email protected] or visit the Join Us page of our website, BikePure.org. We urge all cyclists to join us in support of our campaign, working together in bringing about change and sending a loud clear message that we don’t want drugs in cycling.

We would also take this opportunity to thank all our members and everyone who has supported us over recent months, without them we wouldn’t be here today.

***
Thanks to the guys behind Bike Pure, Myles McCorry and Andy Layhe, for their time!