And on the final day of the year, comes the final addition to our Top Ride series. Fittingly, the last of the Top Rides goes to the rider that waited for the last days of the season to proclaim his greatness loud and clear for all to hear: Mr. Philippe Gilbert. Peter Easton does the honors as we take a look back at his superlative laden Autumn.

When a Belgian cyclist grabs the attention of the cycling population, it is usually for good reason, and it comes with high expectations. After all, the icon of modern cycling is Belgian, and the King himself is a big cycling fan. A failure to meet these expectations-fair or unfair- or turning your back on your roots can have devastating consequences. While the political and social rift that exists between Flanders and Wallonia can only be fully understood if you’re Belgian, a successful Belgian cyclist is still Belgian after all, and that is good enough for many. 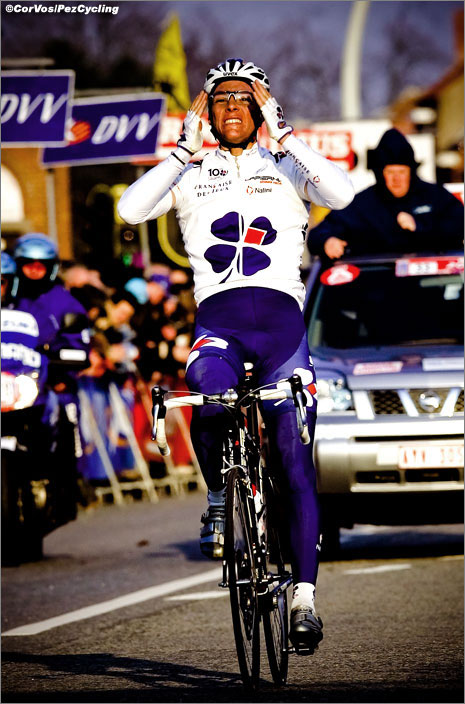 Philippe Gilbert has long been recognized as a potential heir to the Belgian Cycling Throne.

For the past seven seasons, much of the expectation and attention has fallen on the shoulders of two of Belgium’s prodigal sons- each representing their half of the country, and each heading in distinctly different directions at the time. In 2002, as Johan Museeuw took his final Paris-Roubaix victory, Tom Boonen stood on the podium with him, eager to grab the torch that was symbolically being passed. Museeuw’s Domo-Farm Frites teammate Frank Vandenbroucke, however, was still trying to rise from the ashes of a flamed-out career, wrought with doping and personal problems that would haunt him until his death this past October. 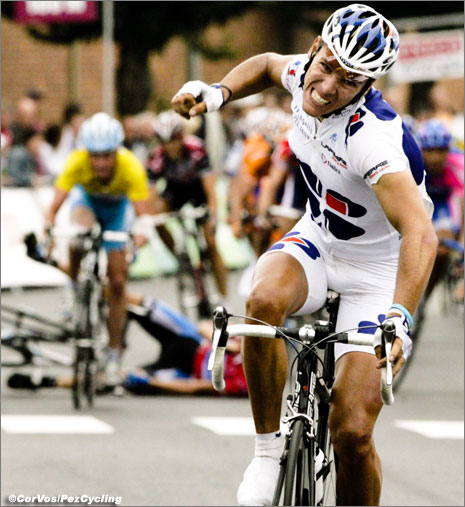 His rise was not nearly as meteoric as, say, Tom Boonen’s, but come 2010, it looks like they’ll be starting the season on equal footing.

The following spring, Philippe Gilbert turned professional, and embarked on an entirely different path. He left Belgium to race for Marc Madiot at Franзaise de Jeux; he embraced his youth, admitting that he was still too young to be competitive in races over 220 kilometers. His results represented his role as leader of the French team, culminating in the overall for the Coupe de France de cyclisme sur route, the season long French national competition that is so important to the French teams and their sponsors. 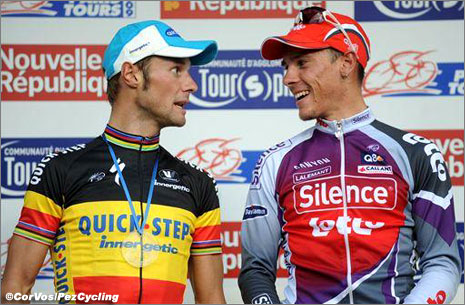 As Boonen exploded and VDB imploded, Gilbert continued his progression, and slowly began a return to his roots, with wins in Het Volk and the GP Wallonie and silver in the Belgian national time trial championships. 2008 began with a second victory at Het Volk, a podium at Brabantse Pijl, and suddenly there he was on the podium at Milan-Sanremo. Patience, diligence, hard work and confidence seem to surround the 27-year old, who grew up training on the climbs of Liиge-Bastogne-Liиge, and lives in Remouchamp, at the base of the climb of La Redoute. 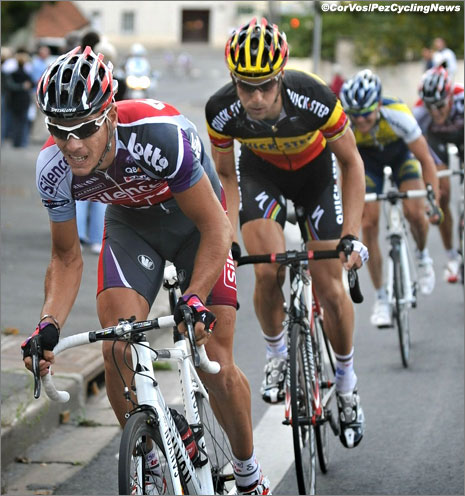 Gilbert doesn’t win his bike races from the sweet confines of the field. Each win is hammered out from the break, painfully, aggressively.

When six ProTour teams came calling in mid-2008, Gilbert chose to return to Belgium, ready to embrace the pressure of expectations and the role of leader in one of Belgium’s two top squads. Classy and understated, his departure from Franзaise de Jeux was met with surprise, but understanding. His gift for team director Marc Madiot seemed like an early Christmas present, stolen from the minds and hearts of the mightier sprinters – a victory in Paris-Tours. Reflecting back on 2009, it seems this move is paying big dividends. 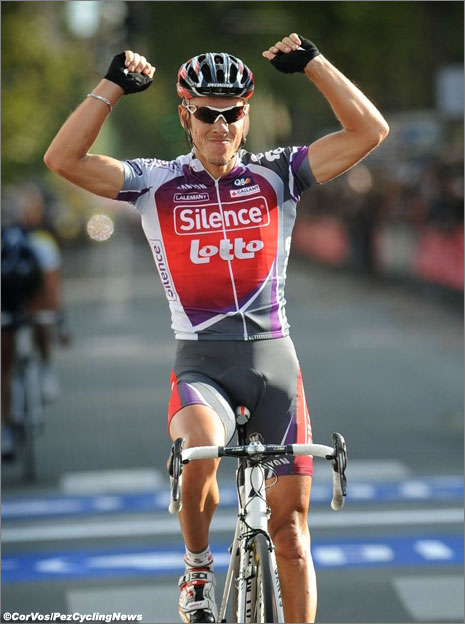 Last year’s Paris-Tours win was splendid, but taking Boonen’s scalp in 2009 was amazing.

To win the Sportsman of the Year Award in any country, one needs to have had an astounding amount of success over the course of their athletic season. And if you’re a cyclist in Belgium, the ghost of Eddy Merckx hides in your closet. One way to rid oneself of lofty expectations is to do something The Cannibal never did. A more impressive way is to do something no one else has ever done, period. Winning Paris-Tours once was enough to cover the former. Winning it a second year in a row puts you in elite company as the 7th rider to do so, including Alberic Schotte, the last Belgian to go back to back in 1946-47. By winning one of cycling’s Five Monuments the following weekend- Il Giro di Lombardia- Gilbert became only the fourth rider in history to claim these consecutive Classics, his company being Philippe Thys (’17) Rik van Looy (’59) and Jo de Roos (’62 &‘63). 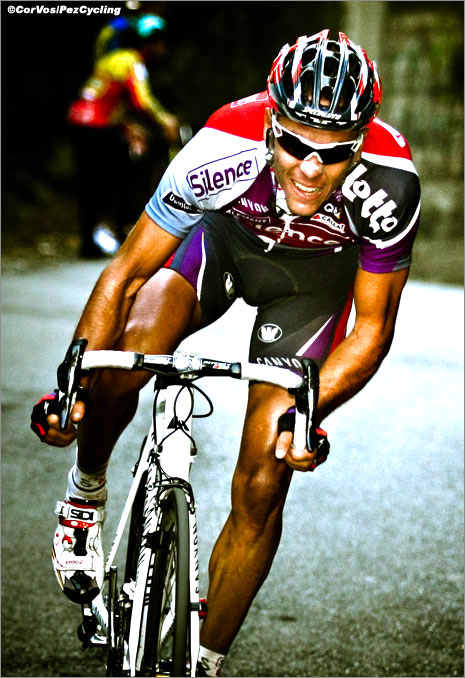 Gilbert’s win in Lombardia almost felt like destiny. There was no doubting the Walloon.

But his success reached further than just a run of flying form in October. His April, while not netting a victory, was very impressive with 3rd at the Tour of Flanders, 4th at Amstel Gold Race and 4th at Liиge-Bastogne-Liиge, all races he will now be considered a favorite for. He claimed victory in stage 20 of the Giro d’Italia; silver at the Belgian National Championships; a stage and the overall at the Star Elektrotoer and 6th place at the world championships at the end of September. 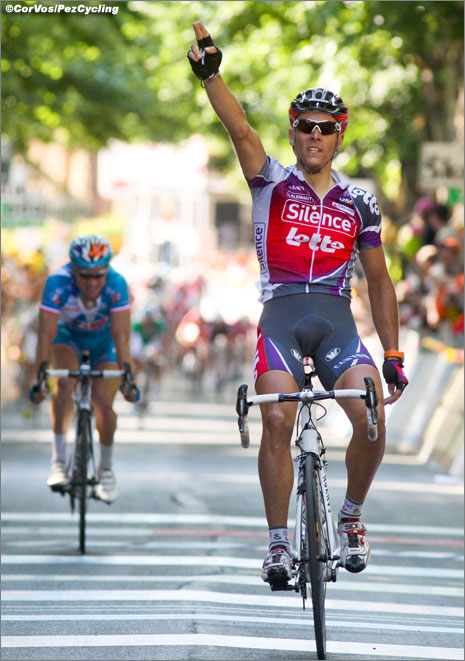 A stage win at the Giro was another feather in Gilbert’s 2009 cap.

Much like the Spring Classics that have a midweek semi-classic- think Gent-Wevelgem now Grote Scheldeprijs and La Flиche Wallonne-the week between Paris-Tours and the Giro di Lombardia has the hilly Giro del Piemonte. Making his own history, Gilbert won this too, and with victory three days prior to Paris-Tours in the Coppa Sabatini in Tuscany, he became the first rider to win these four races in a single season. The only other rider to claim victory in these four races in his career is Andrea Tafi. 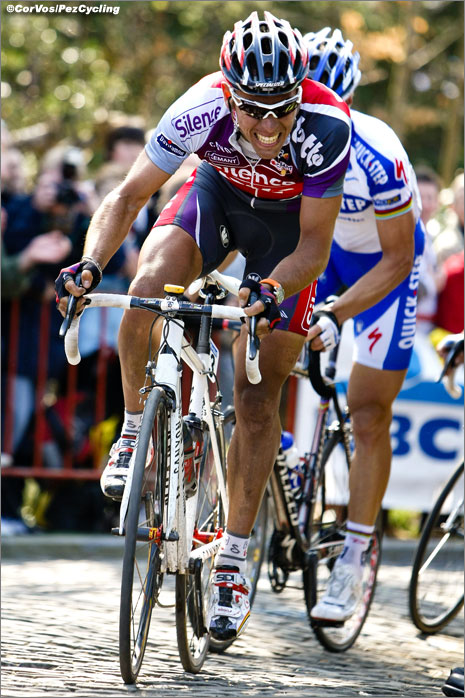 Gilbert made his first appearance on the Ronde podium in 2009 after a solid effort. Is the win possible in 2010?

Does Paris-Tours/Giro del Piemonte/Giro di Lombardia rate as highly as a Flanders/Gent-Wevelgem/Paris-Roubaix or Amstel Gold Race/Flиche-Wallonne/Liиge-Bastogne-Liиge trilogy? Winning one of the five monuments is career defining. The versatility shown in winning Paris-Tours – a race for sprinters-and then following it up with wins over much more demanding terrain requires physical and mental maturity that few riders possess. 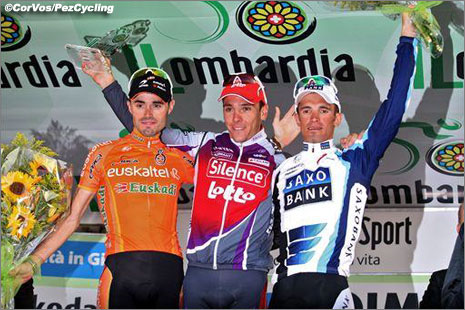 Philippe Gilbert finished 2009 on the top step of the podium – how many more will there be in 2010?

When it’s highly unlikely your path will ever succeed in overthrowing the King, it’s better to start looking for other ways to be knighted. Surprisingly, without winning Flanders or Roubaix, Philippe Gilbert has done just that, and in the process won himself the Belgian Sportsman of the Year Award. At least for 2009, Philippe Gilbert is, rightfully, The King of Belgium.

Thanks to Matt Conn for linking to the full dozen:

Peter Easton is an expert on all things biking and specifically the One-Day Classics. You can catch up with him and all the Classics on the roads of Belgium, Holland, and any place where the biking and food are good with Velo Classic Tours. www.veloclassic.com
Like PEZ? Why not subscribe to our weekly newsletter to receive updates and reminders on what's cool in road cycling?