We knew that Alberto Contador was the current best Grand Tour rider on the planet (ignoring Lance’s comeback) before the 2009 Tour de France. But – and I’m not belittling his previous Giro, Tour, and Vuelta wins – there were questions to be answered in 2009…and he answered them with aplomb.

Allow me to explain my assertion that Alberto still had a lot to prove in 2009… Alberto won the 2007 Tour: he had attacked Michael Rasmussen on the stage to Plateau de Beille showing he was the top climber. It took Rasmussen’s ban to give Contador the lead. His Giro win in 2008 was without a great deal of effort as he came into the race unprepared and rode into form and the pink jersey. By the time he started the 2008 Vuelta he was the top rider in the peloton and dominated the Vuelta to be the only current rider to have won the BIG three. In 2009 he needed to show what he had to offer against the hardest of competition and he did it in the mountains, as you would expect, but also with a time trial win! Stunning! 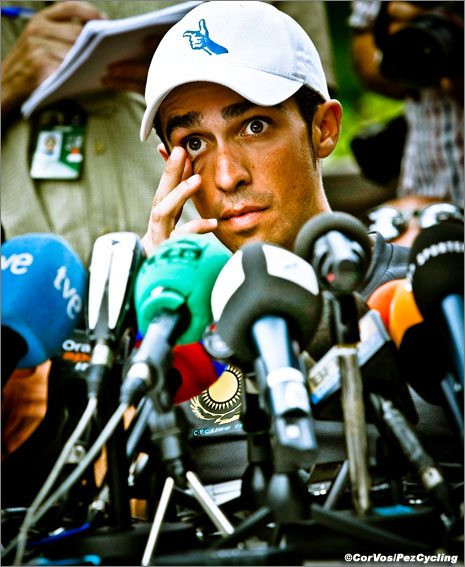 Alberto was unstoppable on the road, but seemed to meet his match in the game of polemics.

A Crosswind!
So, to the 2009 Tour de France: everyone could see the storm clouds building in the Astana team, the Lance return, Bruyneel hedging his bets and splits in team loyalty. This was obvious when the course turned and split the field in a crosswind on stage 3 to La Grande-Motte. Armstrong and his henchmen made the front group; “team leader” Contador didn’t, the gauntlet was down! 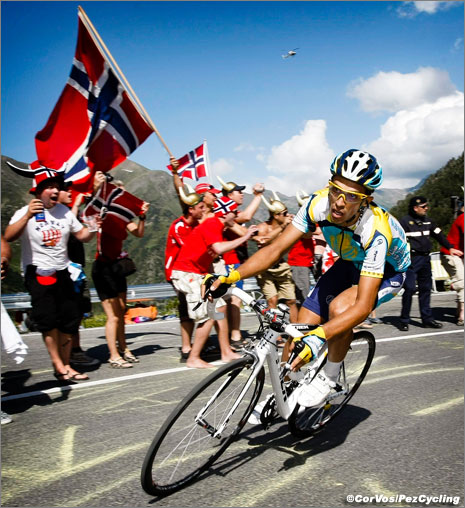 Lance threw down the gauntlet in the crosswinds, whilst Contador countered with his own gauntlet throw on Arcalis.

The First Show of Strength
Things seemed a little better in the Astana camp the next day when they annihilated the others in the team time trial. There was peace until the race entered the Principality of Andorra, where on the summit climb to Arcalis; Alberto left the others looking at each other two kilometres from the line to take a 21 second gap and possibly the moral high ground. 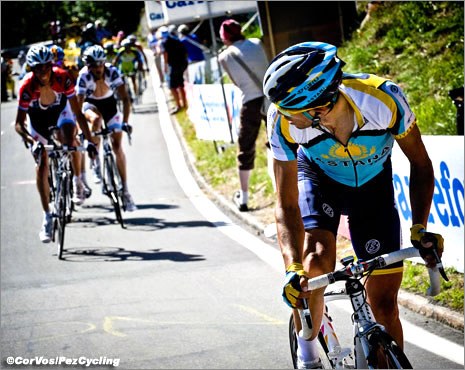 If Arcalis was eyebrow raising, then Verbier yanked the eyebrows right off the head. He was stunning.

The Boss: Contador
Alberto shoots the competition on stage 15 up to the Swiss ski town of Verbier, with six kilometres to the finish Contador danced away leaving the Schlecks, Wiggins, Sastre, Evans and more importantly his “teammates” Armstrong and Klцden, in his wake. He had planned to attack closer to the line, but Saxo Bank had ridden hard to whittle the group down to around six riders, so he took his chance and they didn’t see him again. 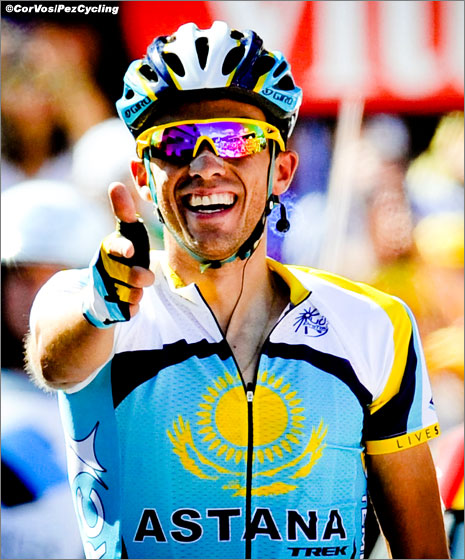 Contador was justifiable ecstatic with his brilliant win in Verbier.

The Contador And Schleck Show
Stage 17 to Le Grand Bornand was short and mountainous and full of attacks, Saxo Bank DS; Bjarne Riis had a plan to put his Schleck brothers up the road and disintegrate the peloton. They succeeded and took the yellow jersey; Alberto Contador with them, although Johan Bruyneel saw it differently “The attack from Contador (3 k’s from the top of the Colombiere) I advised not to go. He didn’t need to attack”. 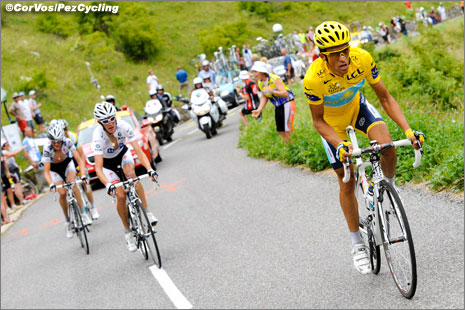 Contador seemed to have thrown caution to the win when he attacked, and the only person he dropped was his own teammate.

On the other hand, Alberto put time between him and all of his adversaries apart from Andy Schleck. He was worried about the time trialing strengths of Wiggins and Armstrong, he needed that gap, then of course things were not great in the Astana camp, so he needed all the friends he could get and who better than the non-time trialing Andy Schleck! 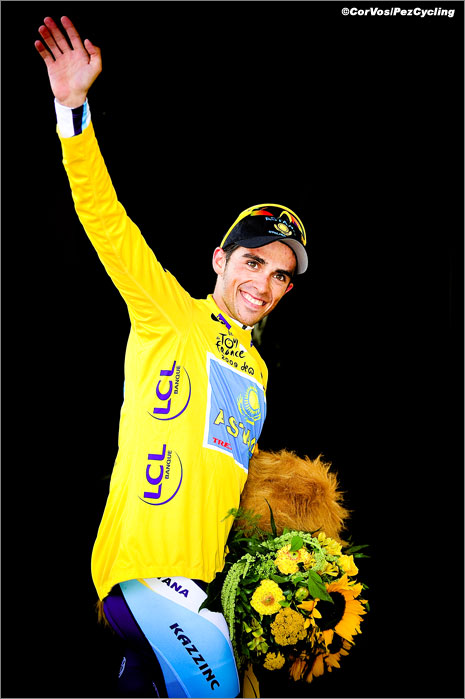 At the end of the day though, he was still waving and smiling. He had more than enough leg power to make up for any tactical missteps.

The BIG Surprise!
We knew Alberto could ride well against the clock; after all he was Spanish time trial champion. Beating specialists; Fabian Cancellara, David Millar, David Zabriskie and overall competitors Bradley Wiggins and Lance Armstrong was a Tour de Force. He didn’t just put a few seconds between himself and the other podium hopefuls, it was minutes; Andy Schleck over 4 minutes, Lance, Wiggins, Klцden and Frank Schleck over 5 minutes. Could the fact that he had to supply his own wheels and get a lift to the course in his brother’s car have anything to do with the adrenaline rush? That was it all over, but what about the Ventoux? 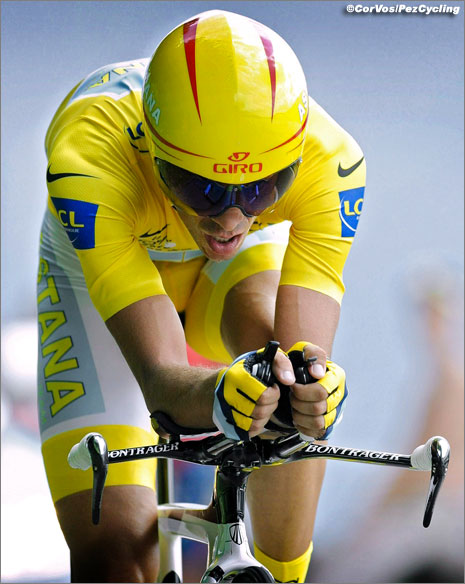 The eyebrows left the building on Verbier, next up was the jaw hitting the floor after Contador beat Cancellara in the final TT around Annecy.

The Final Push: Mont Ventoux
Alberto had nothing to prove, he had already done that on the roads to Arcalis, Le Grand Bornand, and Annecy. He still had to watch Andy Schleck’s innumerable attacks. Another stage win was possible if he had given an a bloc effort, but not important. The action was behind him between Armstrong and Wiggins, Lance wanted that podium place and Bradley had to be sacrificed. 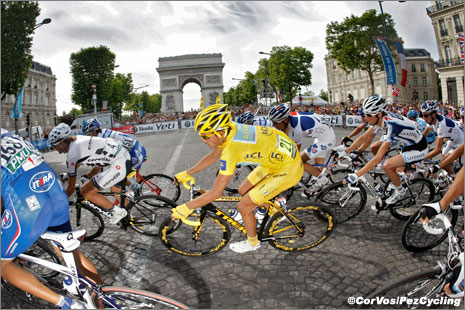 A yellow clad Contador on the Champs moments from wrapping up his second Tour de France and fourth Grand Tour win.

The 2009 Tour de France cemented Alberto Contador’s position as the top Grand Tour performer of the moment. Can he win seven or more Tours? Maybe, but then again, he has already done something his ex-teammate, Lance Armstrong, will never do: and that’s win all three. Alberto is still a young man with lots of time ahead of him, unlike the American. Roll on 2010! 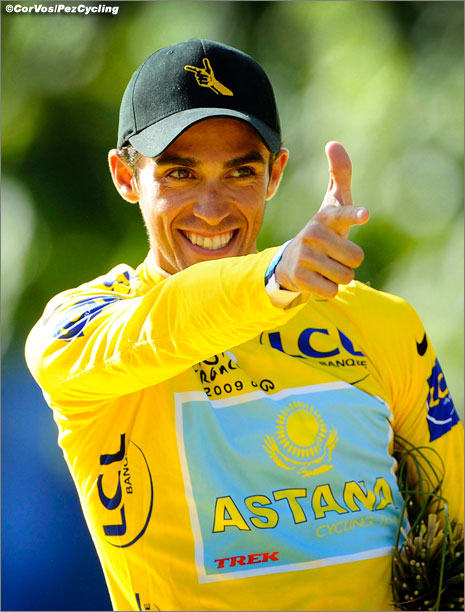 We’ll be seeing a few more shots from the Pistolero in the coming years.