The 2009 Giro d’Italia was one of the most amazing Grand Tours that this young writer has ever had the privilege of covering. In shear suspense, drama, fanfare, and grandiosity, it rivaled the 2003 Tour de France: and that’s saying something. The racing was full-on from start to finish, but one day stands out as the perfect scene that defined the whole play: the final mountaintop finish to Mount Vesuvius.

The 2009 Giro is the stuff that biking dreams are made of. It was perfect bike racing from start to finish. Every facet of the race was of the highest calibre – the sprinters, the climbers, the attackers, the course, the duels, the subplots. I’m getting excited just writing these first couple of paragraphs.

The Cento Anni Giro can be summed up on one single stage though, in my opinion. There were innumerable days that are still memorable, but looking back at the full three weeks, nothing stands out stronger than Stage 19’s last gasp mountaintop finish to the legendary Mount Vesuvius. 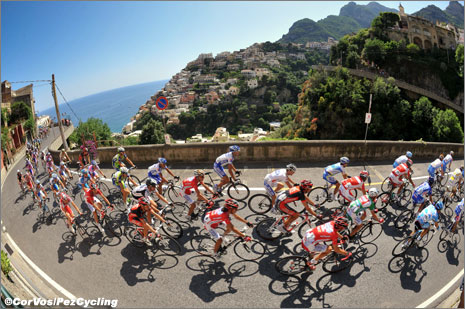 It wasn’t just Vesuvio on the route that day. The Amalfi Coast made us all gawk in wonder as they approached the final uphill test.

The duel between Denis Menchov and Danilo Di Luca appeared to be one for the ages. We all had a little inkling that Di Luca’s fight was just a little too good to be true, but even in that knowledge, I can say that I lapped up every bit of it. This sport is about duels. It’s about Bartali v. Coppi, it’s about Hinault v. Lemond, it’s about Lance v. Ullrich, and it most certainly was about Menchov v. Di Luca in 2009.

Di Luca broke my heart with his positive. I pulled for him like I’d never pulled before. He was the underdog. He literally fought like a desperate dog, biting, growling, charging, clawing, anything to usurp the stoic, seemingly expressionless Russian. I respected Menchov, pulled for him even, but there seemed to be magic in Di Luca. His fight came from the depths of his soul…and some pharmaceuticals, but that’s neither here nor there.

You might be a bit uncomfortable with all of this Di Luca talk. Most people are and rightly so. This series of articles is about the Top 12 Rides of 2009 though, and there’s NO getting around it: the Giro was defined by this duel, and it was without a doubt some of the best racing we saw in 2009. That’s not up for argument. 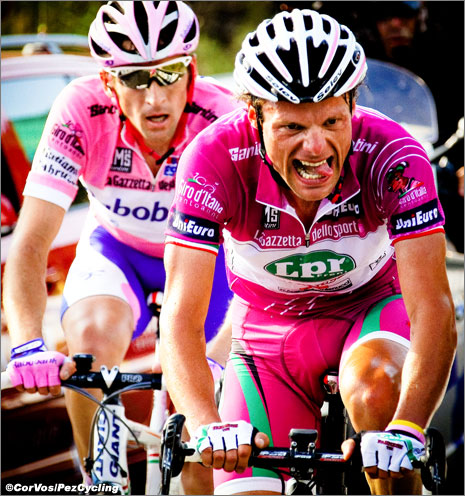 Menchov and Di Luca were inseparable over most of the Giro – and so they will remain in memory.

There were too many other brilliant rides to let the whole memory fall to ruin. Not in the least, it was Denis Menchov who showed us that you don’t have to do it with big attacks and valiant escapades. Menchov defended a hard-earned lead day after day, answered torrents of attacks to his throne, but never wavered.

Matt Conn rates Menchov’s Giro as top notch: Menchov’s Giro win (against what turned out to be a top-fuel-racer) was exciting stuff. He was quiet in the early stages, at the front when it mattered and the best of the bunch over 60km against the clock to Riomaggiore. His Rabobank team buried themselves over the final week to keep him in contention for the final time trial. That first time check in Rome put DiLuca up there with a chance, but even a crash in the final straight couldn’t stop the Russian from claiming the win.

Ed Hood agrees: Menchov? Living proof that it’s not just Ferraris that win races; big diesels can do it too. 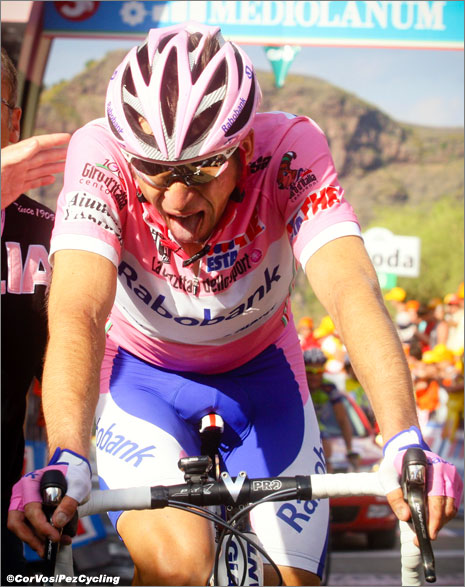 Denis Menchov was a great winner of the 2009 Giro d’Italia.

The beauty of the stage to Vesuvius though was everything ELSE that happened. It wasn’t JUST Menchov and Di Luca – the rest of the supporting cast of characters were all Oscar worthy on that nineteenth stage.

From the early slopes of Vesuvius, the proceedings were thrilling. Lance Armstrong, in his first Grand Tour back since 2005, finally began to show sparks of the form that would net him a podium finish at the Tour in July. He attacked! It was a brief foray, but it was an attack from the Boss, it was life, it was something to show that the hype wasn’t purely, well, hype. True, he finished a distant 16th on the day at the top of the ancient volcano, but by all accounts from the riders, this was a Lance transformed from the first day in Venice.

Carlos Sastre reached the pinnacle of his season on this stage. In retrospect, it’s sad to realize that we would see no better of Sastre come July. He was a shadow of his 2008 self in the season’s most important month, but on two magical stages in May, we started to wonder aloud if Sastre might not actually be a legitimate contender for the 2009 Tour de France and not a one hit wonder. He rode like a Tour de France winner on the Monte Petrano and Vesuvius. He rode with the panache and the power of the rider that left the rest of the field behind on Alpe d’Huez to win the Tour de France. 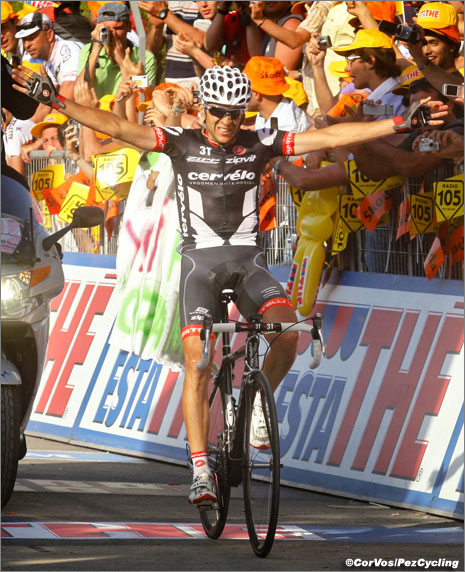 Carlos Sastre took two stages at the Giro, and that was it for 2009.

Ed Hood was on the scene for PEZ that day outside of Napolit: “I have alot of memories from that day; the beautiful Amalfi, the madness and air of lawlessness that is Naples, the lava flows on the mountain – and Carlos Sastre.
It looked like the Tour was his for the taking after his demonstration here, sadly, it wasn’t to be; too much was left on the hot tarmac of Italia.”

Sastre’s ride on the slopes of the mighty Vesuvius was strong, but it was not dominant. It was a beautiful ride because he struggled, he lurched, he desperately searched for anything and everything that could bring him to the line as quickly as possible. His attacks were insistent, unquestioning: he was on, he was going to ride away. The only question was how much time would he take with him? 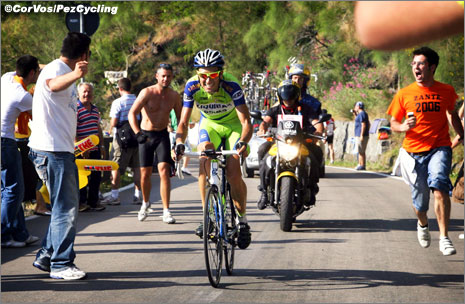 Basso rode a race of suffering and aggression, but finished off the podium.

Just ahead of Sastre when he made his move was the resurgent figure of Ivan Basso. Basso started the Giro was the odds on favorite. It’s hard to believe now looking back, but he started the Giro with the odds. He set off from Venice with a tip of the hat from most of the other favorites, but it became painfully apparent throughout every critical test on the three week journey to Rome that this was not the extraterrestrial of yesteryear – this was a real deal human bike racer. Basso didn’t wallow in his newfound non-superiority though, he fought, he struggled, he clawed. He became a teammate. Basso didn’t have the engine to hold onto the good ship Sastre as it stormed by, but he did have something almost more impressive.

When Franco Pellizotti made his own move with 3k to go after three attacks to rid himself of the battling duo of Menchov and Di Luca, it was Basso who nearly came to a halt up ahead to wait on Pello. Basso was ruined at this point, but gave everything that he had left for Pellizotti’s cause. This type of ride doesn’t sound all too terribly spectacular, but one must consider who did the riding: this was Ivan Basso.

Basso never said it explicitly, but Basso was always a team leader. Sure, he said he’d work for the strongest, but how many riders have said that in the past? He was no one’s domestique, no one’s worker bee. He was a proud Grand Tour hopeful, a proud winner of the Giro, and a fallen hero returning from a tainted past. In the waning meters of Stage 19, Basso put aside his own ambitions, gathered up Pellizotti’s and did his damndest to coax him forward. It wasn’t a huge pull, it was barely a minute, but it was significant…if only in the eyes of this writer. 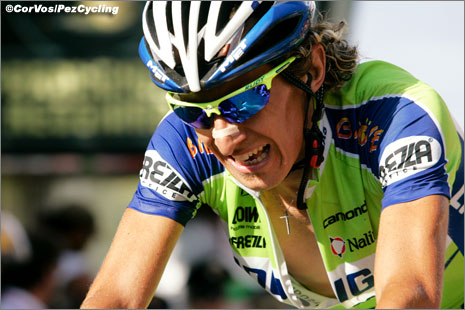 Pellizotti did not get the respect he deserved from his team leading into the Giro, but he eventually won it over the hard way on the strength of a fantastic three weeks of racing.

Basso’s teammate, Franco Pellizotti, showed that he’s not to be deemed anyone’s teammate anymore. Other people will say they are Pello’s teammate in the future. Pellizotti confirmed again why he should be the sole man at Liquigas in 2010 for the Giro, and why he’ll head into the 2010 Giro as a top favorite. He was consistent, strong, aggressive throughout the three weeks. He climbed with the best, left behind the best on a few occasions, time trialed acceptably, and made the point that there are few that can beat him in Italy in May. Only two managed to put time into him over three weeks last year – and one of them came out positive not long after. Pellizotti was a worthy 2nd place at the 2009 Giro. I have to wonder if the win is possible in 2010 – I think it is.

Pellizotti could have been satisfied with his Giro as any proud Italian would be. The Italian victims of Giro heroics over the course of the rest of the season are countless, but Pellizotti went out for more. Matt Conn gives him his due respect: “He had to share top billing with Basso at the Giro and fight against a teammate to get the whole squad behind him for his final assault on the podium in Italy. At the Tour, the decision was taken to sacrifice the GC in pursuit of the mountains jersey. This was no ‘third cat climb points chase’ and the Italian made sure he was in the breaks that mattered whenever there were points on offer. As well as the jersey, he also settled the question of who will lead the team in the 2010 Giro.” 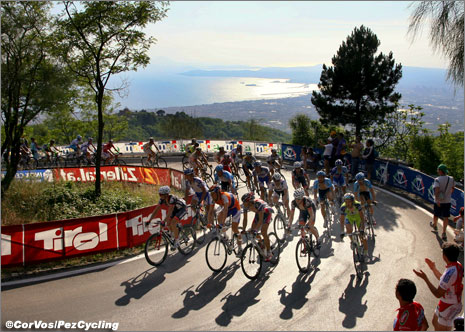 The views off of Vesuvio were immense: like the racing.

When you look back at 2009, don’t write off the Giro because of Di Luca. He ruined it for many, flicked off a sport trying to better itself, and harmed the collective soul of bike racing further. Looking at the entirety of the action in May across Italy, and specifically that hot late May day outside of Napoli – I still see magic.

Looking For More?
Check out the original race report from Dave.

Take another look at our pre-ride of the stage to Vesuvius.

For the latest in fun photography, check out our Flickr page.