Fabian Cancellara’s time trial bludgeoning of all comers days before the road race was about as eyebrow raising as another Yankees championship. Cadel Evans’s spectacular finale in the World Championship Road Race a few days later in his adopted hometown of Mendrisio was the stuff of greatness. It was a ride long promised by such a prodigal talent, but never made good. It was a long time coming and perhaps a sign of greater things to come…

As if his gold medal winning ride wasn’t awe-inspiring enough, watching Fabian Cancellara post up a few hundred meters from the finish line during the men’s time trial world championship in his home country of Switzerland was to bear witness to the full-time authorization of a serious cycling hero. We already knew that, but to hear the crowd roar in approval was as thrilling a moment as I experienced at a race this year. Cadel Evans’s victory in Mendrisio was conversely, an entirely different experience. 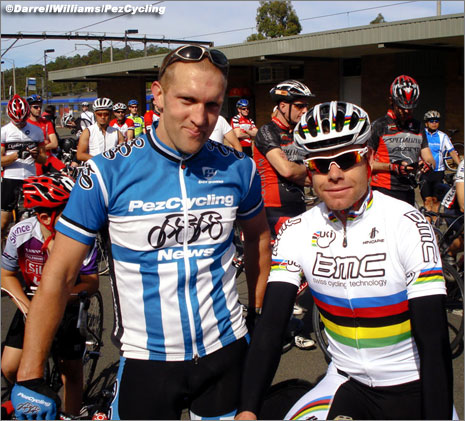 It was clear that there was no love lost between Lotto and Cadel in 2009, but the move to BMC for 2010 was yet another Autumn Surprise. We eagerly await BMC’s debut season as one of the world’s best teams.

When I first rode the Mendrisio road race world championships course in May of 2008, I didn’t immediately recognize the challenge the course presented. It seemed unspectacular. As I grew to know the area over the course of the next 15 months, in particular the small village of Stabio, I slowly discovered the merits of the course, much like discovering the hidden grotti – traditional restaurants that are the heart and soul of Ticinese life. The course presented a shorter than normal circuit, 19 laps and a finish line only 2.8 kilometers from the top of the difficult Torrazza di Novazzano climb. This will surely be a race won by not only the strongest, but also the smartest rider on the day. 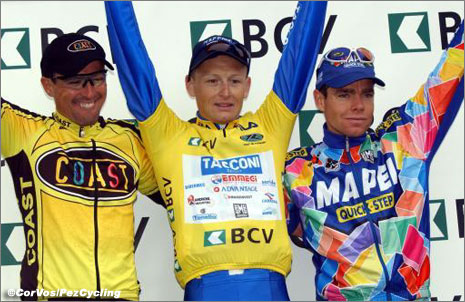 Cadel burst onto the road scene with a great 2002 – he made the podium at the Tour de Romandie, then briefly wore the Maglia Rosa at the Giro.

There probably isn’t a rider who is as enigmatic as he is talented as Cadel Evans. Ever since his spectacular implosion on the climb of the Passo Coe during stage 17 of the 2002 Giro d’Italia that ended his hope of overall victory, it seems he has been searching for, and blaming others for not, reaching his much ballyhooed level of success. 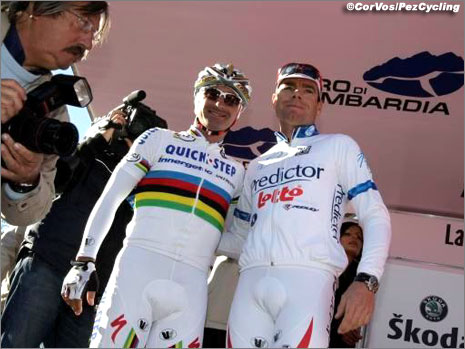 Remember? Cadel Evans was UCI ProTour champion just a couple of years ago.

Even his UCI ProTour title created little buzz. Uncommunicative, reclusive, overly critical and unable to handle the pressure of leadership, few labeled Evans as a favorite leading up to the race, even if it was in his adopted backyard. His Australian teammates voted 8-1 to support Simon Gerrans. And perhaps it was this lack of faith that worked in his favor. Perhaps it’s not until you’re on your last leg, when others have all but given up on you and you have to rely on yourself that seizing the opportunity can show your true character. Is it the man that makes the moment, or the moment that makes the man? 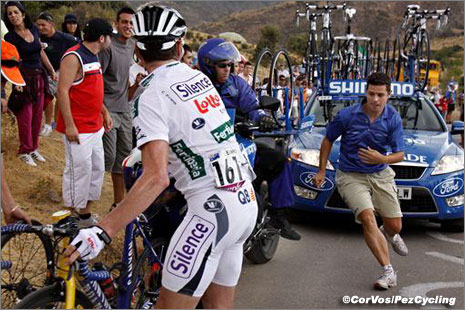 Evans had more than a little bit to be pissed off about after what was one of the worst wheel changes ever. The poor guy saw his Vuelta chances vanish with a flat tire.

With two laps remaining in the 262 kilometer race, it was inevitable the fireworks would start. The difficulty of the course had taken its toll on many of the riders, and the two strongest countries- Spain and Italy- seemed to present themselves as the dominant teams. It was a question of which rider from either of these two teams the winner would emerge. When the Australian led peloton swept up the breakaway, the real racing began. 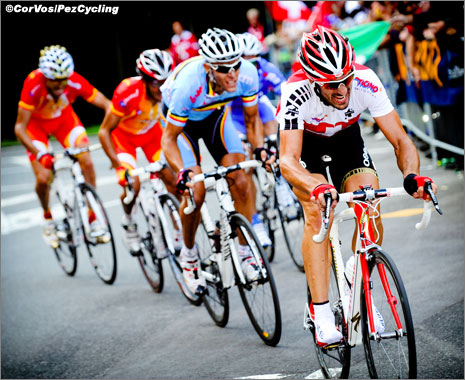 Evans couldn’t cope with Cancellara’s mighty effort midway through the last lap, but he kept the damages to a minimum, caught back on, and bridged across to Kolobnev and Rodriguez before leaving them all behind en route to heavenly success.

Cancellara, fueled by his time trial success and in an effort to be the first rider to win world titles in the time trial and the road race in the same year, attempted to break clear and in the process dropped Gerrans (and nearly everyone for a moment). Evans hung on, just barely. But could a rider who has spent his career lamenting his missed opportunities finally seize the opportunity to determine his own fate? And if he succeeds, how can a rider, who has complained more about being snake bitten than the late Steve Irwin, conceivably beat the curse of the rainbow jersey, let alone want to be a moving target for the whole season? 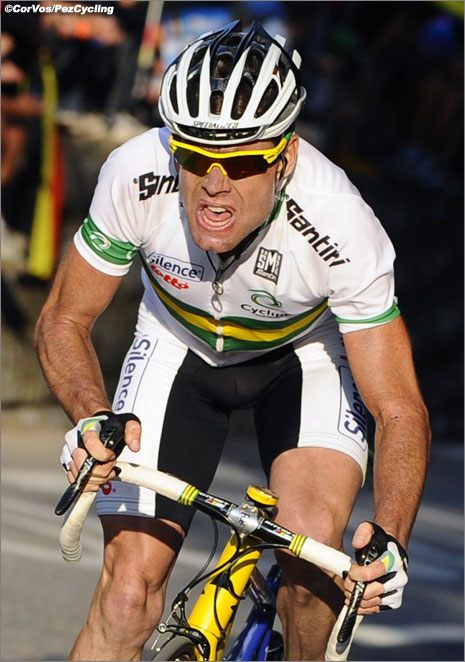 The images of Evans’s attack are still awe-inspiring.

As Evans leapt clear at the base of the 1.7 kilometer Torrazza di Novazzano, and it became evident he would be crowned world champion, I thought back to my original ride on the course. I imagined a winning move by Cunego, Valverde or Sanchez. It reminded of Liиge-Bastogne-Liиge, a race that pulls no punches, favors only the strongest, and in the end, rewards the craftiest. 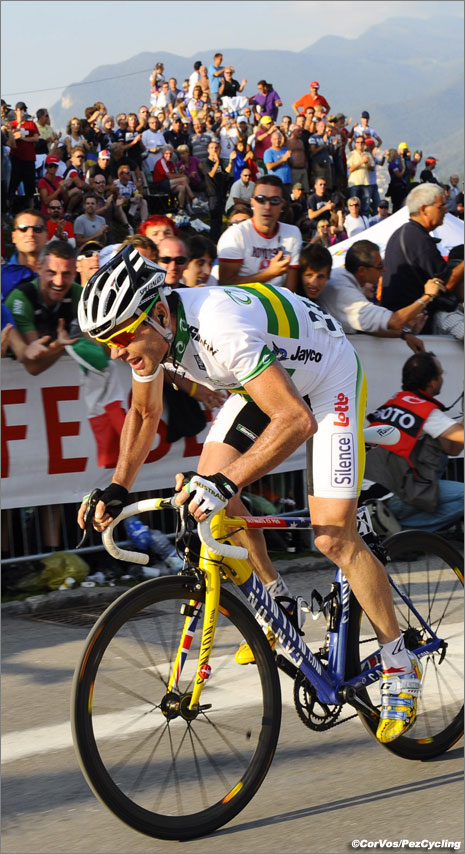 Jered says: This picture goes down as one of my favorite of the year.

To my surprise, this was Evans. As he powered past us on the climb, there was no difference in the loud cheers that had accompanied the riders on the previous dozen laps. As one spectator next to me bemused “I may not like him, but I’ve got to take my hat off to him, he is the new world champion”. 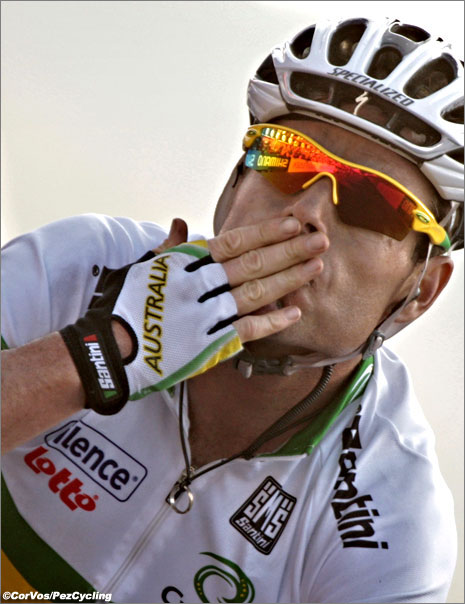 Evans’s victory celebration was patently Evans – peculiar and personal. There was no rampant arm waving, no posting up, just insane effort to the line followed by a kiss directed at the stands, at his wife, Chiara. 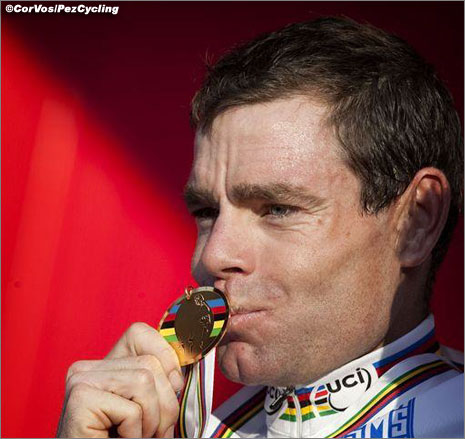 His victory celebration was in stark contrast to Cancellara’s, much as his personality is, and is to many other stars of the sport. The true challenge will be for Evans to accept his role as the new spokesman of the sport, and a voice of strength in the war on doping, struggling sponsorship woes and in-fighting amongst the sports top agencies. Is this his responsibility, you may ask? Not by choice, no, but as wearer of the rainbow stripes, you become a target, like it or not, and it is a role Evans has not risen to. 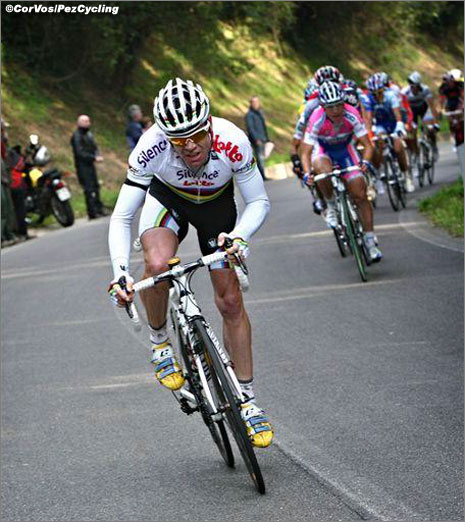 Will we see more of an attacking, aggressive Cadel in 2010?

As I rode the following day back towards Mendrisio from Lake Lugano, I saw a rider approaching. As we passed each other, I realized it was Cadel, wearing not his newly awarded rainbow jersey, but his Silence-Lotto kit. I saw him, I realized for the first time, grinning broadly. Was this a smile from a man who is now prepared to embrace his success, or was it a sly smile from a man knowingly unwilling to accept his new role? The time to tell is rapidly approaching, and I for one hope the curse of the rainbow jersey skips a year. 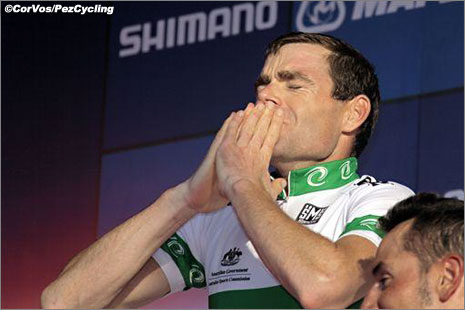 Indeed, let’s hope that, for once, the Curse of the Rainbow Jersey skips a year.

Peter Easton is an expert on all things biking and specifically the One-Day Classics. You can catch up with him and all the Classics on the roads of Belgium, Holland, and any place where the biking and food are good with Velo Classic Tours. www.veloclassic.com

Best of PEZ ’09: Can Thinking Make You Slow?