Sometimes, it’s hard to remember that Andy Schleck is all of 24 years of age. The younger Schleck brother leapt to the top rung of the sport in 2009 with a huge season that included a win at Liege-Bastogne-Liege, what should have been a win at La Fleche Wallonne, and the second spot on the podium at the Tour de France. Peter Easton looks back at Andy Schleck’s year.

While victory is always the best way to gather attention, it was Andy Schleck’s second place finishes that punctuated his rapid rise to stardom as much as his victories did this year. While winning his national road race and a stage of the Tour of Luxembourg clearly identified his national pride, two races may well have defined the new star of professional cycling. The first announced the arrival of a legitimate classics specialist – the second solidified his threat as a perennial grand tour contender. 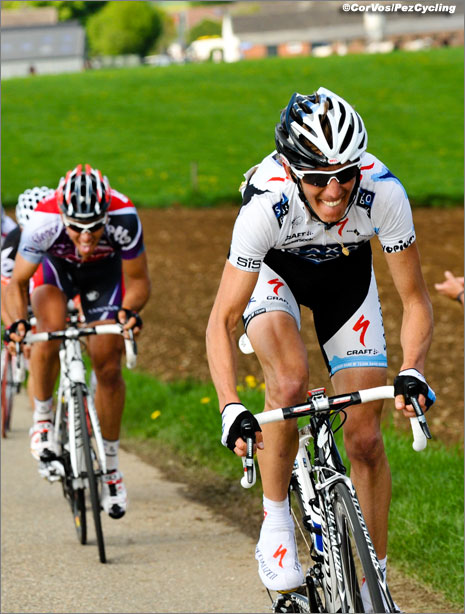 Andy Schleck is not only strong, he’s smart and aggressive too: that’s a dangerous combination.

When a frightening crash in the final hour of the Amstel Gold Race put Saxo Bank teammate and older brother Frank in the hospital and pushed the role of leader for the Ardennes classics onto his shoulders, Andy Schleck answered immediately with a brilliant 2nd place in La Flиche Wallonne. Across only his third April as a professional, his two previous results in the midweek classic were anonymous- 76th in 2008 and 57th in 2007. 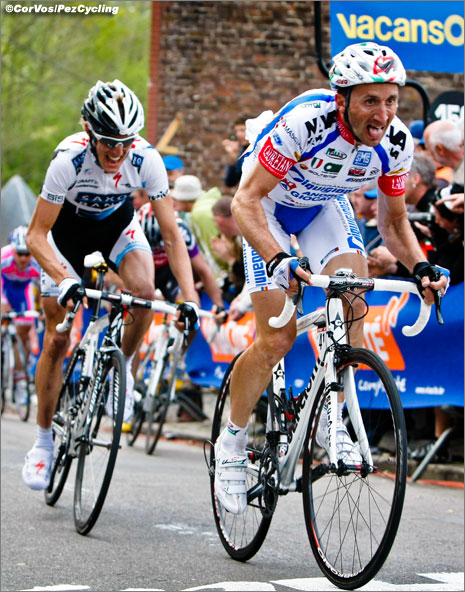 Woulda shoulda coulda’s don’t get anyone very far, but it’s hard not to play that game at this year’s La Fleche. Davide Rebellin should have been suspended long before he took the win on the Mur with Andy right on his heels.

At the start of Liиge-Bastogne-Liиge the following Sunday, teammate Gustav Erik Larsson offered some prophetic commentary. “Today all of our efforts are for Frank and Andy (Schleck). The new climb added last year, the Roche aux Faucons, is very difficult. You think it’s over, but it keeps on going. This is going to be one hellish race”. With the dedicated support and tireless efforts of his teammates, and a well-timed attack on the Roche aux Faucons, Andy Schleck took a head first leap into the forefront of cycling by winning Liиge-Bastogne-Liиge and the well-deserved respect of his teammates and peers. 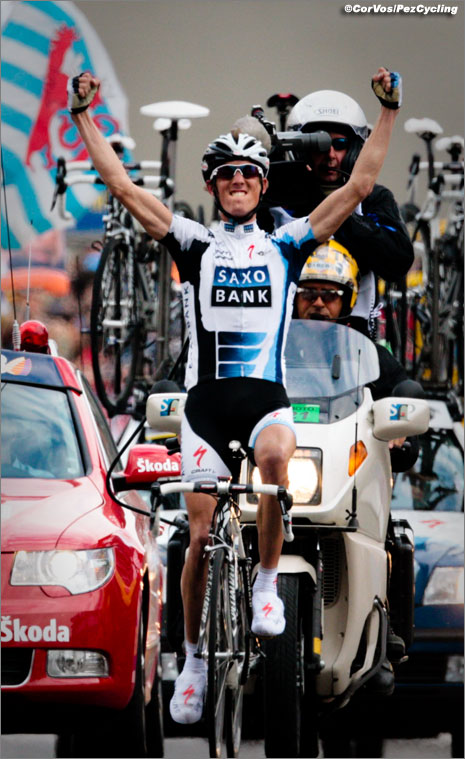 Schleck got his revenge at Liege-Bastogne-Liege after an unbelievable solo ride into Liege to take his first Monument in dominant fashion.

The second came on July 19th, during stage 15 of the Tour de France, 207 kilometers from Pontarlier to Verbier. The mountain top finish at the Swiss ski resort surely would not determine who would win this year’s Tour, but it would tell everyone very quickly who was in contention. Schleck took the opportunity to announce to the world that he was one of those contenders. When Alberto Contador darted out of the select group of riders with 6 kilometers to go, only Andy Schleck responded, and though he couldn’t catch the Spaniard, he finished second, taking over the best young rider classification in the process. 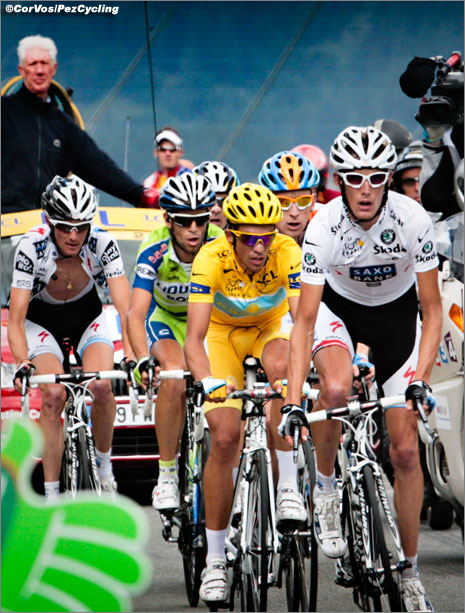 Andy leads the way in the Alps.

If knowledge comes with experience, and experience brings wisdom, then Andy Schleck is destined to become a wise old man. Starting in only his third Liиge-Bastogne-Liиge, and his third grand tour, the 24 year-old is clearly ready to carry the future of the sport on his broad shoulders. Schleck certainly paid his respects to La Doyenne, emulating inaugural race winner Leon Houa in 1892 and Eddy Merckx in 1969 by joining the elite “23” club as one of the trio of youngest winners of the oldest classic, and doing it in old-school fashion- solo, and with authority. 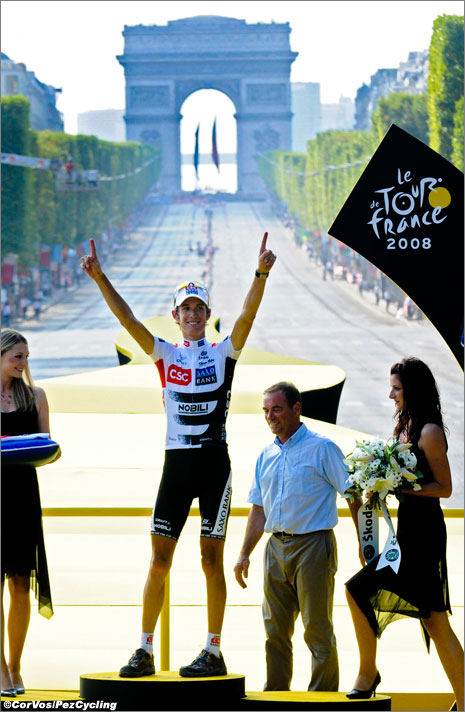 As I drove through the swell of fans on La Redoute, I was strangled by the passion and intensity that is this race. I imagined all of the riders that have ridden this gauntlet and have suffered for success, and more often than not, have failed. I thought of how the roads of this course, a part of modern life, are animated once a year for a bike race that is now 117 years old. In the end, the pain is the same, the hills are just as hard now as they were years ago, and young or old, the winner will have earned his spot on the top step of the podium. 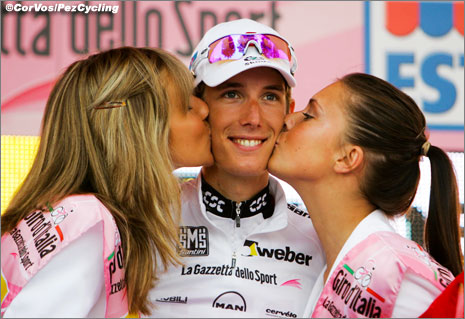 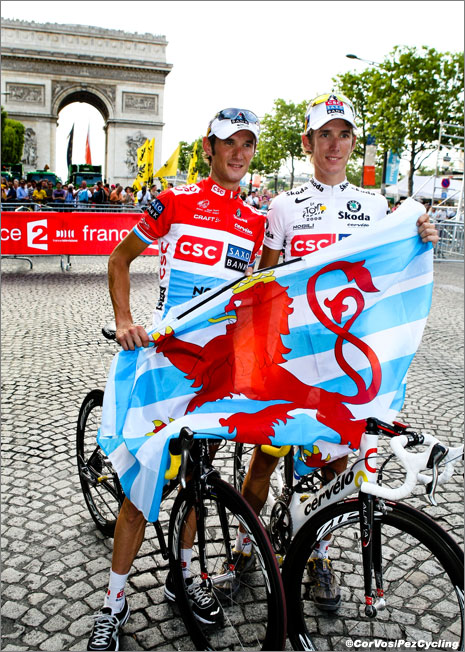 The Brothers Schleck form one of the most potent duos in bike racing.

You have to go back to 1975 and Eddy Merckx to find the last rider to win Liиge-Bastogne-Liиge and finish on the podium at the Tour de France. Merckx first accomplished this duo in 1969, and while comparisons to the great Merckx are always unfair, something has to be said for the accomplishments of the rider that is mentioned in the same sentence with him, at the tender age of 24.

The question now is not if Andy can win a grand tour, it’s when. It won’t come easy, but the affable young man certainly proved he deserves to be mentioned as a contender come 2010. In addition to his second place at Verbier, there was also the well documented queen stage to Le Grand Bornand. While so much was made of Contador’s tactics and the childish antics of Astana, Andy went about his business finishing second, with brother Frank claiming victory. 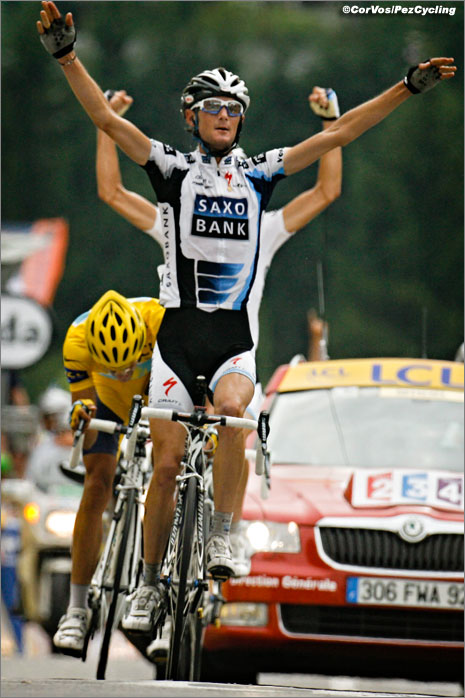 Frank and Andy celebrate a great day in the Alps.

To prove his point further, Andy rode side by side with Contador up Mont Ventoux, as difficult a climb as there is in cycling. Racing up the Geant de Provence after 19 stages and more than 3,000 kilometers tests the will of the strongest of riders, yet here was Schleck, still attacking in the hope of vaulting brother Frank on to the podium with him. 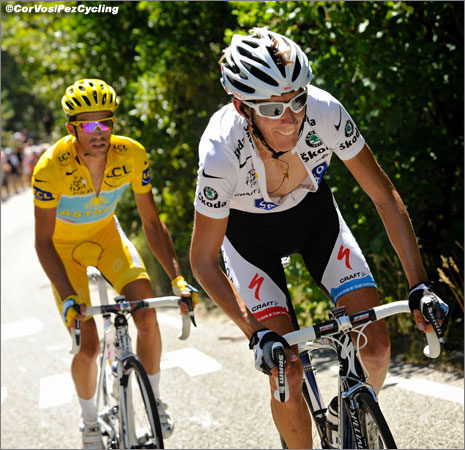 The excitement that Andy Schleck brings is a refreshing shift from the monopoly the Tour de France held during the Armstrong years, and holds again during his reemergence. Schleck’s talent is such that he is a favorite for any race running from April through October-the Ardennes Classics, the pre-tour stage races like the Tour de Suisse and the Dauphinй-Libйrй, his national championships, Tour de Romandie, the Giro di Lombardia and the world championships. 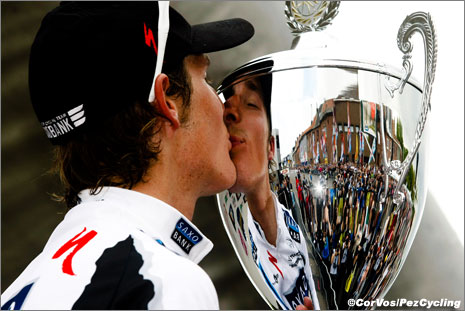 It’s been a long time since any rider can lay claim to this, and perhaps, much like his attack on the Roche aux Faucons, Andy Schleck has timed it perfectly.

Peter Easton is an expert on all things biking and specifically the Spring Classics. You can catch up with him and all the Classics on the roads of Belgium and Holland with Velo Classic Tours. www.veloclassic.com
Like PEZ? Why not subscribe to our weekly newsletter to receive updates and reminders on what's cool in road cycling?