Tom Boonen is becoming the new Mr. Paris-Roubaix. With his three wins, he equals the greats: Eddy Merckx, Francesco Moser, Johan Museeuw, Octave Lapize, Gaston Rebry and Rik Van Looy. The man from Mol still has a way to go before overtaking Roger De Vlaeminck, but his 2009 win in Roubaix was probably his best.

In the spririt of the 12 days of Christmas, we took our usual swipe at something slightly different – the 12 Top Rides of the 2009 Racing Season. It took us about 5 seconds to see this title in itself was a tad limiting, so we expanded our minds (which had nothing to do with cleaning chains in the unventilated work shop) to recognize 12 rides, or riders, who stood out in 2009 with jaw-dropping, or head scratching achievements on the bike. May we humbly present, for your consideration…

It must be the best feeling in the world to enter the Roubaix Velodrome on your own and savor that lap without worrying about a sprint. Tom did this and had plenty of time to hold three fingers of each hand aloft in victory, but the hard work had already been done out on the harsh roads from Compiиgne, particularly on the Carrefour de l’Arbre section, which sealed his solo finish. 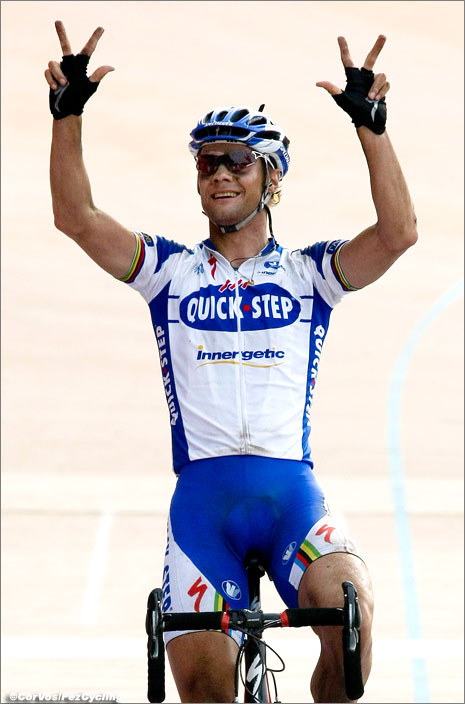 Boonen’s third victory at Paris-Roubaix leaves him only one shy of Roger De Vlaeminck’s immortal record.

The Sharp End of The Race
After the early group had been swept away, we had the six riders that would be contesting the last 20 kilometres, from them “Tommeke” was the only rider who didn’t eat the Northern French dust as Lady Luck was on his side. 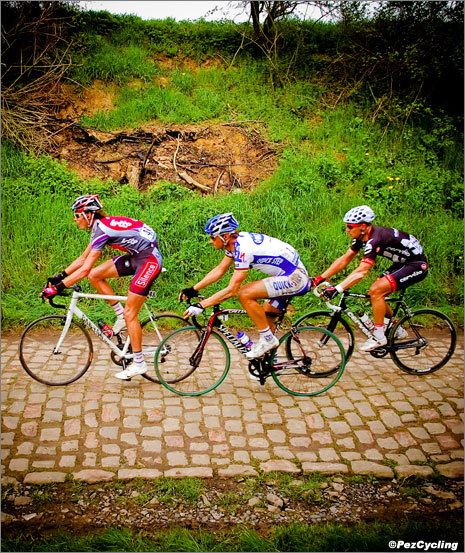 Boonen didn’t have a completely smooth go of it – he crashed before the race even hit the first sector of cobbles. 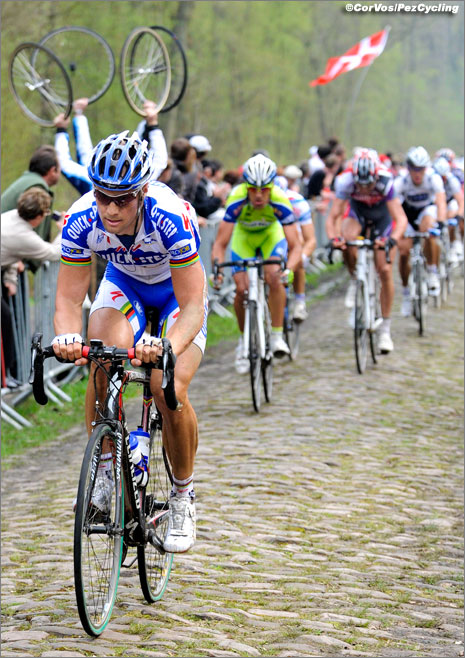 As always, Boonen was at the front, in command through the Arenberg Forest.

The first rider to ignite the blue touch paper of the fireworks was Big Thor. Boonen was on him like a flash, behind Flecha was leading the charge in to a dusty corner when he over cooked it and brought down the others.

Solo Tom
Up front Boonen had put the foot down on the accelerator through a mad throng of Flemish fans, into a tight left hander Hushovd didn’t make it and crashed heavily, damaging his bike. Tom said “I didn’t see Thor crash. I heard something behind me but there is no way you can look back on the cobbles”. This left Tom Boonen to make his solo victory to Roubaix, for the others the race was over, as Tom remarked “I gave it all I had.” Filippo Pozzato was the strongest, but he couldn’t get back on terms with the flying Tornado Tom. 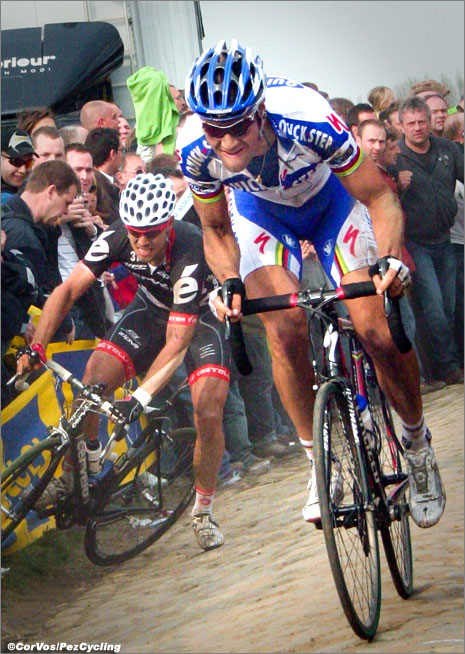 The big crash, followed closely by Hushovd’s crash, Boonen’s acceleration, and then Pippo’s fruitless chase – all made for some of the most thrilling bike racing we saw in 2009.

You could say Boonen won because of the mistakes of others, but that’s not how Paris-Roubaix works. When the pressure is on, that is when mistakes are made. Bad luck can play a part in “The Hell of the North”, but you make your own luck at the most brutal of all of the Classics. When you are tired, it is easy to crash or puncture. In the mountains, if you can’t climb you get dropped; on the cobbles, if you can’t ride cobbles you crash, puncture, or get dropped. You can either do it or you can’t, and Tom Boonen certainly can.

Tom Boonen has expressed his great love of the cobbles and has said “It would be nice to win it next year for the fourth time, that would be my utopia”. A fourth win would put him level with the real “Mr. Paris-Roubaix” Roger De Vlaeminck, but Tom Boonen put his name in the history books in 2005 when he won Ronda van Vlaanderen, Paris-Roubaix and the World Road Championships. In a few years Tom Boonen could be The King Of The Cobbles. 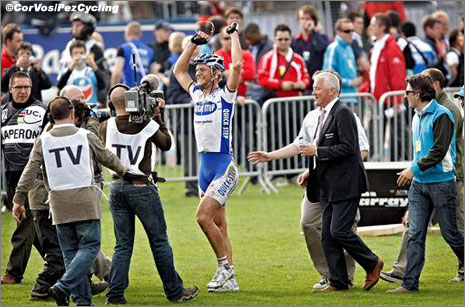 Boonen is never shy to celebrate his big wins.

Stephen Cheung, Toolbox Editor and first-timer to the cobbles of Paris-Roubaix this year, agrees that Boonen’s ride was of the highest order:

“Being there in Roubaix for the first time and hanging out in the deciding Carrefours de Arbre sector in between the 1 km stretch where both Flecha and Hushovd crashed, I can definitely attest to Boonen’s amazing ride. 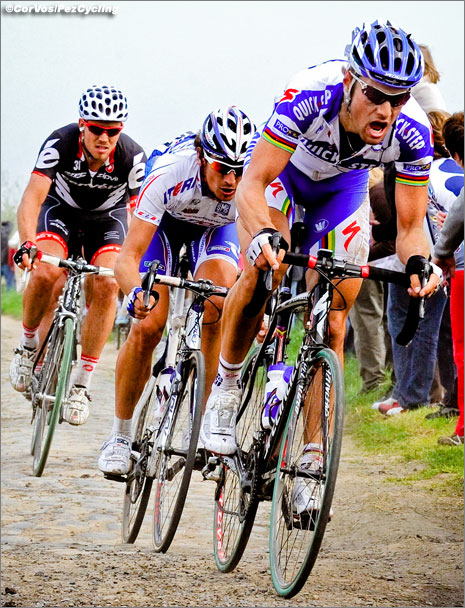 I don’t know about you, but I’m excited to see what this trio does in 2010 – along with the likes of Cancellara, Ballan, Hincapie, etc…

“To be THE Belgian hero, having the added pressure from not winning in Ghent or Flanders (much of Belgium still likely feel that way even though his teammate Devolder won), to be in the absolute nuthouse that the pave sectors are with nearly all of Flanders there and screaming your name, and delivering the goods with style and panache.

“Some might say it’s only because of the crashes by Flecha and Hushovd and that Boonen got lucky. However, remember that Boonen flatted and chased back solo to the break that was in full flight shortly beforehand. Also, it was arguably because of Boonen’s rampaging pace that caused the others to crash from fatigue anyway. 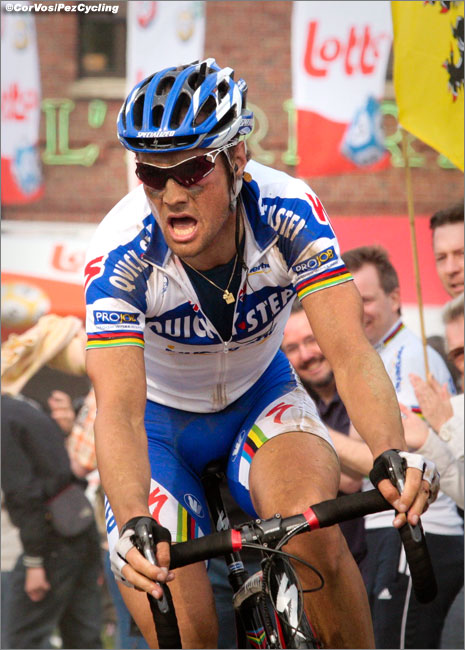 Winning solo is always a beautiful thing, but a solo victory in the Roubaix Velodrome is timeless.

“Then there was the final pursuit match between Boonen and Pippo. Pippo looked so smooth and elegant, like he was floating over the cobbles. In contrast, Boonen looked like he was taking a sledgehammer to each single stone. Style be damned, Boonen pulled away relentlessly and won by a huge margin.”

No matter how you want to look at it – Boonen’s ride was magnificent – a very fitting addition to our Top 12.