You never know when a star interview will present itself, but any good journalist is always ready to shoot the poop with a top rider. PEZ’s own Heidelberg Homeboy – Jered Gruber – had a chance encounter while training in Mallorca Spain, with UCI #2 ranked Erik Zabel. But approaching a top pro is not always as easy as you’d think…

In part 1 of this 2 part story, we ride along with Jered as he discovers one of his training partners for the day is Erik Zabel – the former Green Jersey winner himself – today decked in his new T-Mobile kit for 2004. The thing about approaching pros is, though, they’re like a box of chocolates…you just never know… 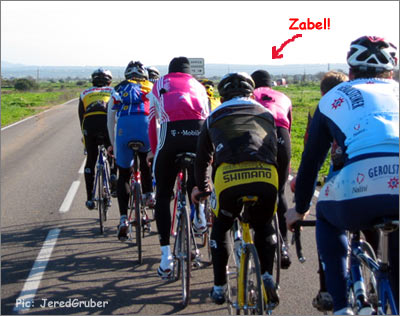 I met Erik Zabel last week (In December 03), and I talked to him. Wow, that’s a pretty nice sentence to read back over. It didn’t come easy though. I don’t think it would be fair to present the conversation that we had without first presenting you with my first introduction to Erik Zabel…

Out for our first real day of training on Mallorca, we quickly ran into Erik Zabel and another T-Mobile friend, Jan Schaffrath. After thanking the heavens above for allowing such a saint to drop into my very lap whilst training, something finally clicked in my head… Maybe I should TALK to Zabel! I could ask him a few questions, maybe arrange an interview while we’re here! Ah yes, the rational part of my brain had begun to function again, and the “oh my god oh my god oh my god, that’s Erik Zabel” part began to subside.

After another hour or so, I finally mustered up the courage to introduce myself to the icon. I swear, I haven’t been this nervous since my woeful days as a bachelor in high school. So after my pull at the front, I dropped slowly back…
(Note: the ensuing conversation transpired in German mind you, so my nervousness was probably even more evident…)

Me: Hi there, my name is Jered Gruber, how are you doing?

Zabel looks slowly over at me through his Rudy Project Rydon’s. I completely forgot that we were riding uphill, or that I was on a bike for that matter. There was a visible grimace on his face, as if a cockroach had landed on his filet mignon… My heart sank, but I persevered… 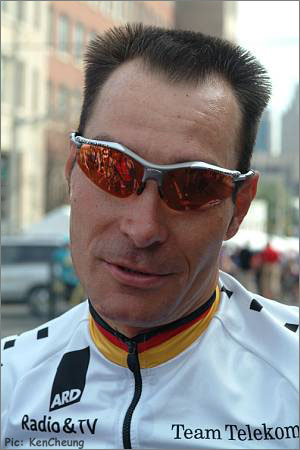 Me (in German): Hi, I write for a leading cycling website, PezCycling News, and I was wondering, if it wouldn’t inconvenience you, and if you had the time perhaps, maybe I could do a little interview with you. But again, only if you have the time (note: – I was tying to be as polite a possible…).

At this point, I was literally shaking, his fixed stare never changed, time stopped as I anxiously awaited a loud, haughty lambaste. Anything to break the silence…

And finally, Zabel spoke: Internet site? No, I do not talk to internet sites anymore, they only report lies…Internet is crap. Sorry.

You have to appreciate Herr Zabel’s tone as he uttered these words… absolute loathing and disgust for websites…. The, I’m sorry part really didn’t sound like an “I’m sorry, I’d love to, but I just don’t associate myself with the internet anymore.” No, this was more like: “Sorry, you little peon, I don’t know who you are, where you’re from, but why the hell are you bothering me?”

My hopeful exhuberance completely deflated – my ego crashing faster than the Hindenburg – I thanked him for his time and retreated to the back of the pack and the relative comfort of being as far away from him as humanly possible – if only for a few minutes, as he was bound to return to the back after his pull.

I was so utterly dumbfounded, I couldnt believe it. I had seen Erik Zabel so many times on TV, I’d seen him give short interviews and he always seemed like a quiet, good-natured kind of guy… But not today. It was so very Kafkaesque, as the dominating figure of Zabel lashes out and leaves a poor little underling (me) mystified and lost. If this was fiction I would probably go hurl myself off of a bridge at this point. Rejection sucks.

As I began to recover from the shock of the encounter, anger followed. Zabel’s stock on Jered Gruber’s Sporting Hero Index plummeted to a low that no cyclist or athlete could ever possibly hope to achieve. I just didn’t understand it, this was training, base training for that matter, there was no racing going on. I didn’t think I approached him inappropriately. I was quite confused, maybe this journalism stuff wasn’t as easy as I had previously imagined. Zabel had gone from highly esteemed sprinter, awesome rider, somebody I often rooted for in races, to hateful ogre in about 5 seconds flat. Looking back, I still can hardly believe what happened in that first encounter, and especially what happened when compared to the events that followed!

So I sat grumbling at the back of the pack, trying to come up with an acceptably evil word which would best suit his ignominious behavior to a fan. Then I looked up, and to my dismay saw him sidling his way in my direction.

Oh no, I tensed up, held my breath and made sure to keep my eyes in the forward and locked position. He passed slowly by, I didn’t look up, well, I glanced sideways, but he couldn’t see that. When he was sufficiently behind me I exhaled slowly, thankful that he hadn’t verbally berated me in front of the whole team for being a stupid AmErikan. And yes, it really is possible to have such thoughts as an almost mature 20 year old.

No sooner had I let up my guard from another possible Zabel attack, he got me from behind. I felt a slight pull on my saddle and started to go backwards, oh no oh no oh no! I hoped that it was a flat tire, but as I looked around, there was the face of Erik Zabel.

Except this time, once again I did not get the reaction I was expecting, this time he looked inquisitive and kind. He apologized for being a bit brusque earlier, but he explained that he had some bad experiences with a German cycling website which reported lies about him.

I told him that my plan was not to write a story about him, but rather to interview him, ask him questions, and have him answer them, I would write down his answers word for word and he could look at them himself. I had no plans on writing lies about a man that I very nearly idolize, especially once he started talking to me! Oh man, and there went Zabel’s stock again. 10 minutes before he could have played with the old time Black Sox in Chicago, and now he was well past Lance Armstrong and moving higher. I was talking to Erik Zabel!!!!!!

A man of apparently few words, he nodded his approval at this thought and seemed interested in the idea.

So what follows is a rather informal interview on the bike as we made our way homewards….

Interestingly enough, he started the conversation with a bit about me. He asked where I was from, what I was doing here, and so on. He nodded, and commented that my German was quite excellent, I thanked him for the compliment and shrugged it off blushing madly. Erik Zabel just complimented my German! I am such a 15 year old.

So, lets move onto the questions and his interesting answers, and maybe draw a few conclusions about a most interesting character – I couldn’t help but ask about his new bike, the Giant TCR.

Winter Training: Your Own Personal Gavia