Years that is. Yeah I know, hard to believe – especially for me – and I’ve been here the whole time. But, dear PEZ-Fans, indulge me a few minutes if you will, for no other reason than this is kind of a big deal… to me at least.

Taking the Leap
It was around November 2001, I was sitting at a once popular local bar with my best friend Ric. I was lamenting the fact that I could see this clear opportunity for a cycling website that showed how much fun it was to be at a bike race, and really take readers along for the experience… I had almost all the parts in place – I could build the site and define its look, I had a back end I could get cheap from a guy I’d worked with who’d built his own database engine (it still works great), I’d had several years working in the ad biz selling media space. And I was pretty sure I could find an audience if I posted the right content.

My buddy Ric put it to me… “so go get the content.”

At the time I had no idea how to do that – I had slim to none connections in pro cycling, but I set off on my journey. Luckily as a born optimist, I figured that as long as I could get out of bed in the morning, there was a chance I’d take even one step forward that day. 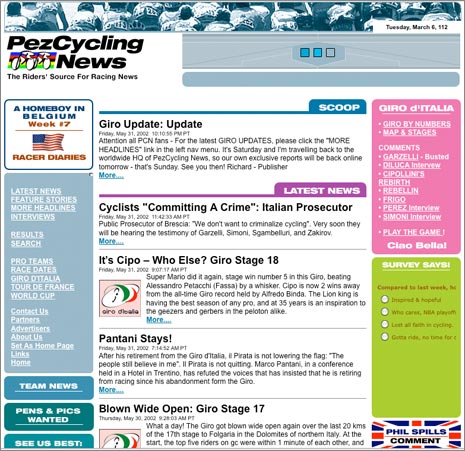 Thanks to the guys a the Way Back Machine, the history of PEZ lives on. Here’s how PEZ looked back on June 1st, 2002. Click the link and you can still access stories like we did in the old days…

How was I to know that what started as an idea to present a more entertaining version of the news of pro cycling, would become a daily visit for thousands of pro cycling fans around the world.

The real launch date slipped by, under the radar – not so much on purpose but mostly because I can’t recall exactly when I pressed the ‘go’ button. I know it was late February 2002, but while launching myself into the great unknown, it never occurred to me to save the date for some sort of future remembrance. So much for confidence…

But that date is a milestone (around my house at least) for starting not only the longest job I’ve ever had, but also the only one where I’ve never wondered “what’s my next job gonna be…?” You can probably guess there’s nothing else I rather be doing.

Ten years is a pretty long time to do anything, but even longer if it’s web-related, and longer still if it has to do with cycling on the web. And while we think PEZ is a truly unique space for the daily reportage of the news from the pro cycling world, the judges who really count are you readers who validate the work we do by stopping by each day or week for a few minutes to get your fix of ‘what’s cool in pro cycling’… We appreciate your time, attention, and support.

One of the things I’m most proud of is that the core PEZ-Crew has been here for so long – Alastair was the first to jump on board right at the start, followed by Gord in mid 2002, Stephen and Charles joined that Fall, Dave in 2003, Jered & Chris in 2004, Alessandro for the Giro in 2004, Ed in 2005, Matt Conn & Les in 2007, Corey in 2008. These are an amazing bunch of guys whose style, knowledge & passion for writing and reporting cycling is like nobody else I’ve seen.

We still haven’t been in one place at the same time, and not all of us have met each other, but we plan to change that this June with a celebratory week of riding in Italy.

Earlier this year we posted our 10,000th story. Ten thousand… And most of those stories were written by us. It takes a lot of hours to produce each of our stories, but we think the effort is worth it.

Our philosophy to not waste your time means we only post a couple of new stories each day, but they’re stories we think are absolutely worth a read, whether to enrich your day, offer an educated opinion or just share a personal experience as we collectively enthuse about the world’s most beautiful sport.

I start most days with a big scoop of self-motivation, settle into my lopsided swivel chair, and start tapping the keys in my own version of ‘chewing the bars’ to keep the whole thing rolling along. Certain elements of running PEZ have become more like ‘work’ over the years, but I guess that’s true of any successful venture – “nothing worth having comes without some kind of fight” – to borrow from Bruce Coburn… But I admit that I’ll once in while I look around to see where we’re at, and think about how far we’ve come. And since we won’t pass this milestone again, it’s a good time to cast a glance back at those very early days of PEZ.

So many fantastic things have happened in the life of this website that it would be impossible to distill them into one article – but two things I’ll always remember are leaping off that cliff & hoping I’d figure out how to fly this thing, and how Alastair’s photos of hot babes from the 2002 Vuelta saved PEZ from going into the digital dust bin, and paved the way for everything we’ve become.

I was writing the odd story myself, but before anyone had joined me, the content that filled the homepage was aggregated headlines from other cycling sites that when clicked on, took readers to the originating site. Not really a great way to attract, or keep readers.

Something We can All Appreciate
There was that day in August 2002 when I received the email confirming our credentials for the Vuelta. I immediately emailed Alastair Hamilton, who I’d found in a Yahoo chat room writing race reports and coerced into writing some for PEZ. I asked if he’d go to a few stages for us, and by the way, you’ll have to pay your own way. Thankfully, Al said yes – partly because he’s a true fan of cycling (having been involved in the sport for years- even as Paul Sherwen’s mechanic!) and possibly because I told him his only real assignment was to get me pictures of the Spanish podium girls… But Al’s work was what launched our now famous Daily Distractions gallery – check out our first postings here.

Sure enough, within days of posting our first DDs from that Vuelta – the site traffic turned from negative to positive – and set in motion the attraction of an audience that would eventually make PEZ a viable commercial undertaking.

The list of milestones is as long as you’d expect from a decade of this fun I get to call work, and each year it just gets longer. We’re gonna make this a special year on PEZ, with some great giveaways coming and a bunch of even cooler content as well. So once again – thanks very much to everyone for reading the site – and clicking on those advertising banners that make this website possible. I hope you’re with us for the next ten years.

And oh yeah – don’t forget to pour yourself a negroni – you know I will.

How To Win Milano-Sanremo, By Fausto Coppi