I knew it was coming, but in all the excitement of the last few weeks – I sort of let the date slip by… “Yeah I gotta tell people about this…”. I speak of the passing of our 11th birthday here at PEZ, and as Spinal Tap might agree, that makes us “one louder”.

We made it another year – and what a year it was as we celebrated that big milestone known as “10”. I’m still dreaming back to my week of riding with the PEZ-Crew in Bormio & Lago di Garda like it was yesterday.

But turning eleven is a little trickier, it’s not an obvious milestone, and it kinda gets lost after the hoopla of ten. In trying to figure our some meaningful pontificance for the past eleven years, I thought back to the time I first learned how to ride a two-wheeler – and I can remember it clear as day. 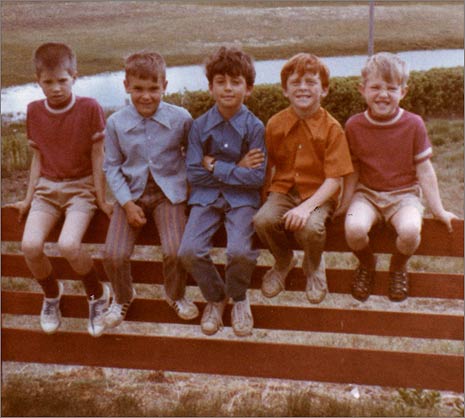 That’s me in the middle, with my brother, cousin, and a couple of friends on the farm in Saskatchewan.

I was about 7 or 8 years old, living in Calgary in the late 60’s. One Saturday my dad took me to the local K-Mart to look at bikes. I remember my mother saying a used bike would be good enough, (and cheaper), but then my dad and I sort of decided the new one would be way better. It was shamrock green, sort of metallicy, and the down tube decal said “Super-Deluxe”. I thought that was pretty cool, and that was proof that this was ride worthy of me – even though I had no idea how to ride a two-wheeler.

But my visions of speeding around our neighborhood quickly stalled as I discovered that balancing on two wheels was a lot tougher than I’d expected. Part of the problem seemed to be that the training wheels seemed to pull me over to one side or the other, so that I was still basically riding a tricycle.

We persisted through the summer, with Grant the local teenager, chipping in to double me around on the back of his banana-seated Mustang so I could get a feel for the balance. It was no use – I could not shake off the training wheels.

And I still remember the frustration and anger I felt at not being able to find that point of balance – the one that you only ever find once in your life – the one you never forget.

Then we took a trip to a friend’s farm near Moose Jaw, Saskatchewan. (That’s pure Canadiana, eh?) They had two boys the same age as my brother and I, and the older one was already riding his two-wheeler.

It was in the evening, I remember because the wide open prairie sky was darker to the east than it was to the west. We were fooling around with the bike on this gravel road that led down to their farmhouse.

All of a sudden I got in my head that I could do it, to figure out how to balance. I have no idea why after weeks of frustration that suddenly now some sort of epiphany happened.

But it did. I swung my leg over the bike and set off down the gentle grade, slapped my feet onto the pedals and started turning. I think someone may have been pushing me along to get started. And then I was free. I found the balance, and turned the pedals over. I careened down the road towards the farmhouse.

And that was it. Nothing in my life has given me as many good memories for a longer period of time.

Over the years I’ve had a bunch of different bikes – the Fastback 3-speed, the BMX, then the mountain bike (a few), and in recent years road bikes (a few more). I’ve had fantastically fun times on them all – vivid memories stick with me from each one, but the thrill of the ride remains as exhilarating as that day in Saskatchewan. The rides have changed and evolved, but for 40+ years, the bike has always been there for me – a guaranteed good time.

And after eleven years of PEZ, we’re evolving too – a brand new version of the site is coming shortly. Sure, I think the changes will all be for the better, but we’ll still be PEZ, and I’m hoping that just like riding your bike, we’ll remain a guaranteed good time.

In trying to find some bigger meaning to eleven years of existence, the first thing that came to mind was one of my favorite scenes from the classic “This Is Spinal Tap” – which more than anything offers some truth to what ‘eleven’ really means.

Thanks again to everyone for reading, to our advertisers for their gracious support, and of course the valiant PEZ-Crew for contributing to making your workday slightly less productive, but hopefully a lot more enjoyable.

Catching Up With The Hincapie Development Team