In an unprecedented outbreak of PEZ-tivities, the capo himself, Richard Pestes, has organized a Tenth Anniversary bash to celebrate a decade of the world’s coolest bike site. Monday saw a carefully co-ordinated and seamlessly smooth meeting of PEZ regulars … and the fun started at the superb Hotel Funivia in Bormio. Riding, chatter, fine dining? It’s all here …

Monday lunch time: I’m hunched in a corner at Verona Airport. There’s a guy with a bike case and he looks suspiciously like the emailed picture of PEZ book reviewer Leslie Reissner. Miraculous … we’ve found each other in mere moments. It’s a great start, and gets immediately better as the Dr. Stephen Cheung saunters out of the Arrivals area. In minutes, it’s like we’ve known each other all along. 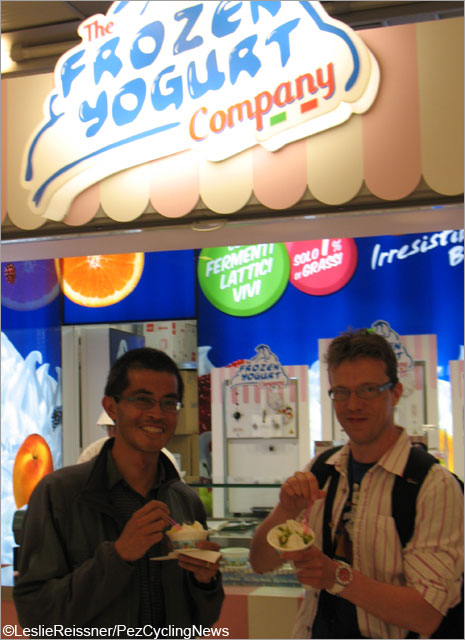 “PezCycling News?” It’s Danielle from Hotel Funivia, up in Bormio and his wife Elisa, who have driven all the way down, just to pick us up. It’s all going brilliantly.

We fire into the van and start barrelling up the road to Bormio, with a rapid detour for lunch at our week’s upcoming second hotel (Enjoy Garda Hotel), where Nicola has put on a spread for us. Pasta, salad, pollo. It’s magic, and Leslie is off to a flier in his quest to track down the trip’s greatest coffee. 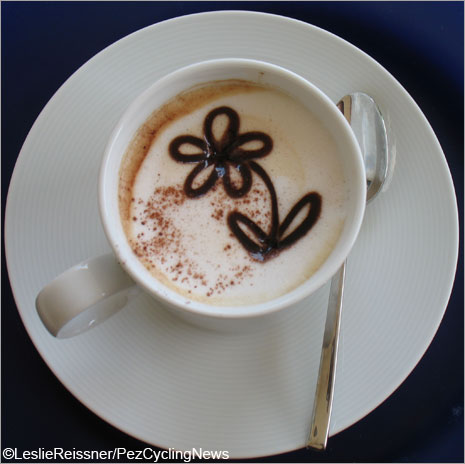 Monday PM: We’re in the bus, flying north. Danielle has a treat for us. The route into Bormio will be via the Stelvio! We take the epic haul up from Prato, yep, the one with the switchbacks.

As we take the 22-kilometer climb, the full horror of my situation dawns on me. This is on the menu for Thursday… It’s jaw-dropping. Anyone who’s ever seen it, ridden it, driven it, flown over it … they spew out superlatives and it lives up to its billing. Grind up through the trees: 1800 meters, 2000 meters, 2200 meters. The air conditioning in the van is cranked as the outside temperature tumbles. 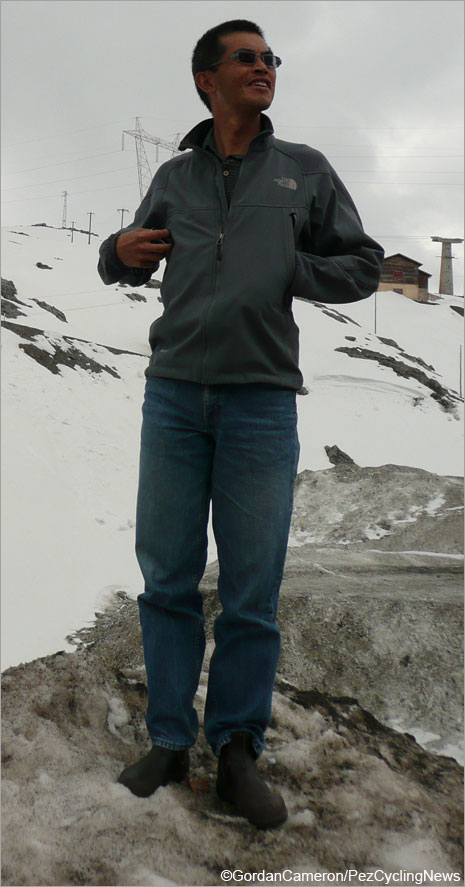 I sit quietly in the back of the bus bemoaning my sedate training regime: predicated on eating, drinking and cruising around in the sun on the bike, it’s looking dangerously inadequate. Stephen looks terrifyingly fit. Leslie has the facts, figures and form as he’s ridden this before. Aaah, well … Stephen looks to a brave new future at the summit. 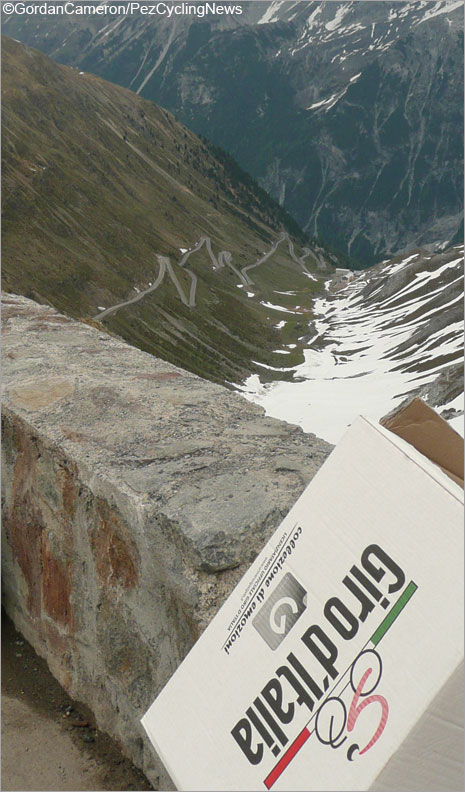 At the top, it’s incomprehensible that there’s even a road up here. The switchbacks below are like a fairytale book illustration of some distant kingdom. But there’s civilization, too. A museum to the road engineer, and Giro detritus as evidence of Thomas De Gendt’s grand day out. 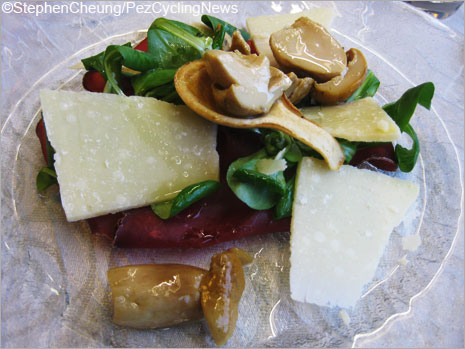 Monday night: We know Pez is on his way, but the traffic out of Milano and up the valley roads is desperate. And then … an SMS. “Are you guys nearly there yet?” We are … in fact, Daniele has already deposited us at the bar!

And then, ten years after I started to write for the site, Pez and I finally lay eyes on each other. It’s a beautiful, man-hug moment. The gassing starts immediately, and then we’re off to dinner. 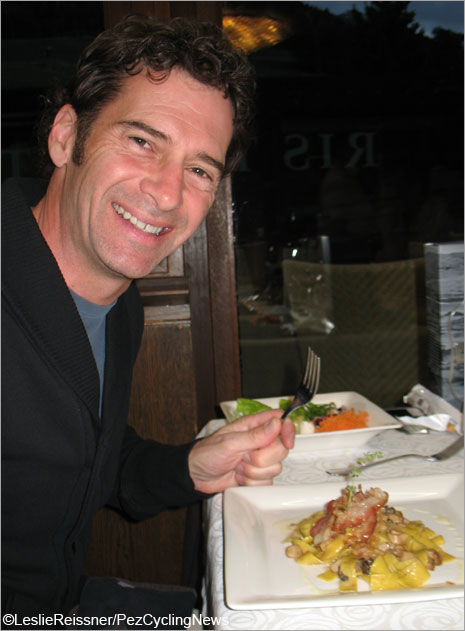 The guys at the Hotel Funivia know what they’re doing. A beautiful opener of meats, cheese and mushrooms … and then the starter. Leslie and I go for Tuscan-style soup (awesome), and it’s followed by – between the four of us – devilled rooster, steak, a belting vegetarian dish for Leslie. The wine flows, the stories begin. It’s pretty cool to finally connect in the real world with these guys.

Tuesday morning: We’re off! It’s 100km today, with the option of tacking on the last 30kms if you feel inclined. We’re flying out of Bormio and down the valley to the south, making for the climb of the Teglio. There’s a good group of Aussies, Canadians, Americans, Italians. The sun’s shining. Everyone feels good. The first 50kms are virtually all downhill. 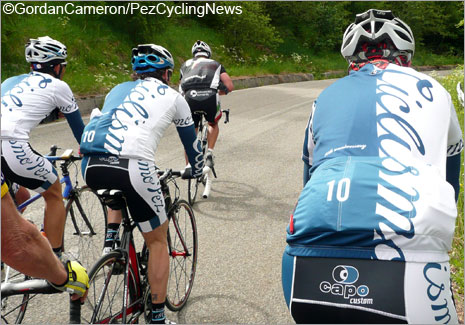 Apart from one short, sharp loosener which gets the heart rate going perilously early, it’s quick and smooth on the road. Leslie, Pez and Stephen take the front behind Giacomo, our host and one of the guides from the Hotel Funivia.

We crest the first climb and the scenery explodes before us. Through a tunnel, down a goat/bike path and we stop where another of our guides Riccardo (there are 4 guides for the 16 riders in the group) points out the ripped-up hillside opposite. On the day another earthquake killed a dozen and more, it’s the scars of a landslide with fatal consequences from 30 years back.

With our thoughts back on happier matters, it was a continual sense of “Wow!” The scale of the mountains leaves you feeling awestruck. 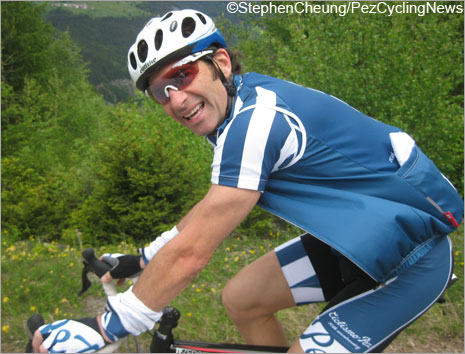 Back on the bikes, and back in the groove, our leader is having a blast. Despite leaving his family back home in Vancouver, hopefully the substitute nuclear unit (three grown men) will help to fill the gap. 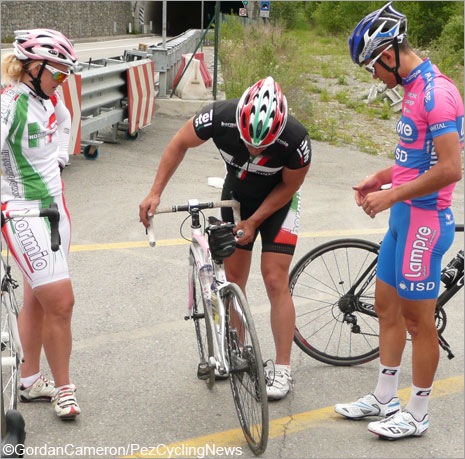 The guides Danielle, Giacomo (who dipped in and out of today’s ride, as he was also on van-driving duty), Dani, and Riccardo were perfect hosts, keeping an eye on the front and back of the group, marking dodgy corners, taking an endless stream of photo requests. Along for the day was Lampre-ISD pro, the supernaturally nice Davide Viganт who made a very creditable stab at being pro cycling’s most genuine person. Helping fix bikes, pacing, answering questions on training and racing, with total patience and honesty. Meeting Davide was definitely one of the perks of Hotel Funivia’s relationship with the bike. 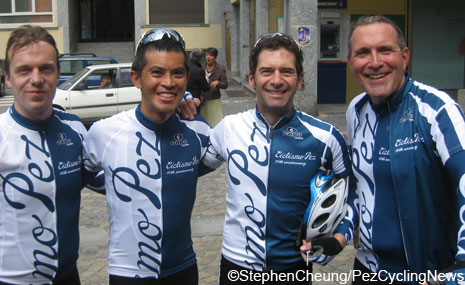 Later in the week, the PEZ contingent will swell as Corey, Matt, Ale, Seldo, & Jered and Ashley join us, so for now a foursome is the greatest recorded Pez team sighting … this one outside Grosio’s Hotel Sassella. Like the tenth anniversary kits? 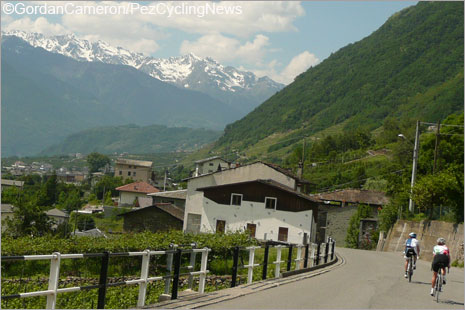 And now, back to business. It’s another rapid-fire descent along well-maintained bike paths, beside the river, through orchards and vineyards. Without the guides, we’d have been lost forever down here. 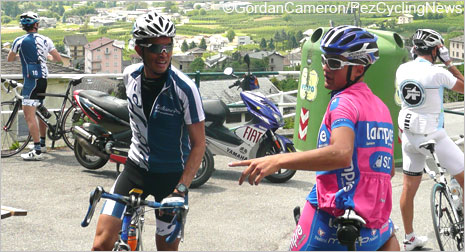 We come to a stop as the climb to Teglio looms above. Vigano says it’s about seven or eight kilometres, but you can add another ten on if you really feel like it. 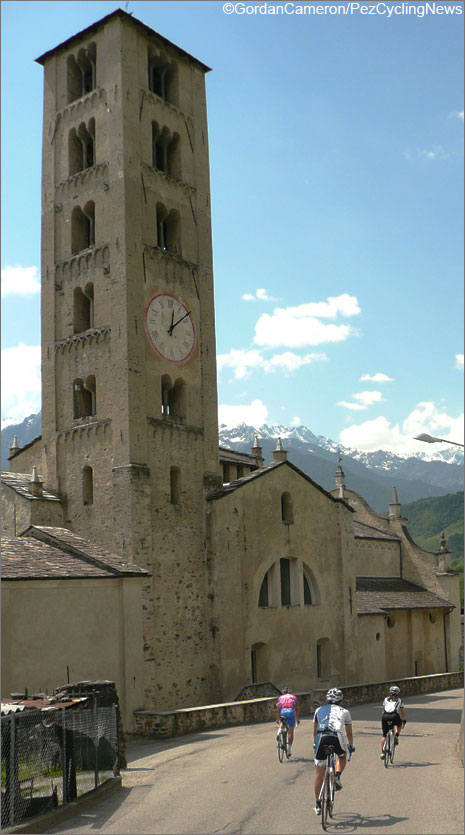 Tuesday afternoon: Brief respite, as we plunge past the church towers and pretty houses, and then up, up, up. For a pasty Scottish boy, it’s waaay hot, the furnace-like air whipping the moisture out of mouth and throat. Stephen is snapping pictures as I grind past and take refuge in the shade of a roadside home. 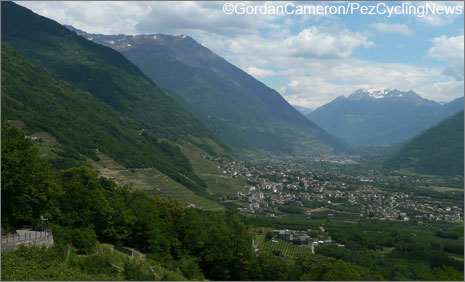 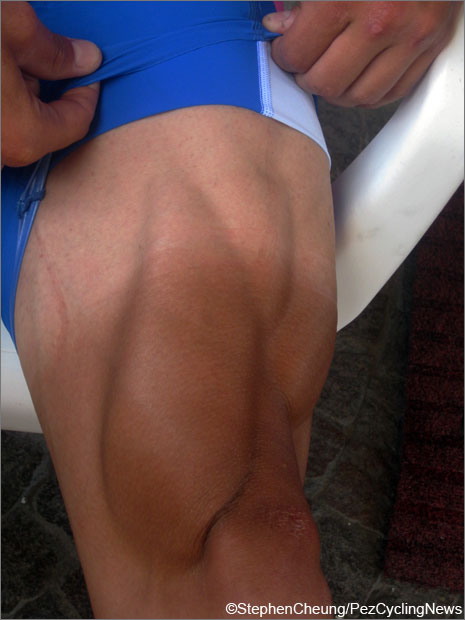 Teglio is still decked in pink ribbons after the Giro passed through. I’m one of the last up, and the Pez crew is seated at the Bar Pizzeria La Galeda. Vigano’s muscles are a topic of fascination, and it’s commented upon that this is one of the rare public occasions where it’s OK to be openly awed by another fella’s physique. 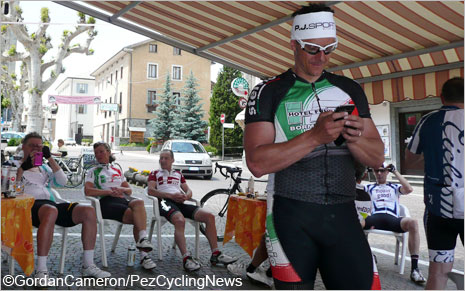 Vigano shrugs and smiles as Danielle posts the results on Facebook. Within 60 seconds, his thighs have been Liked by a young lady in Australia.

We plunge down again, flying towards the valley floor. The air is super-heated, the birds chirp as we hurtle past, lizards dart up the concrete retaining walls, the views are great but incompatible with high-speed camera work! 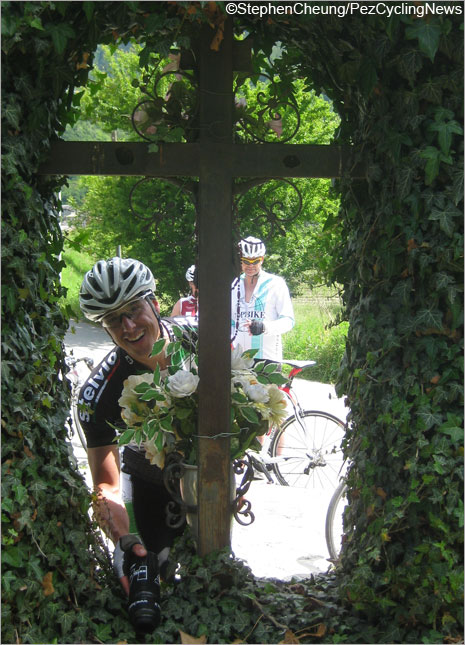 There are roadside fountains aplenty, all pinpointed by Giacomo and his allies, and every opportunity is taken to stock up on aqua. The toll is starting to show now, and the pace is nippy as we head back to Grosio and the Hotel Funivia van. Even our leader is starting to question his legs. 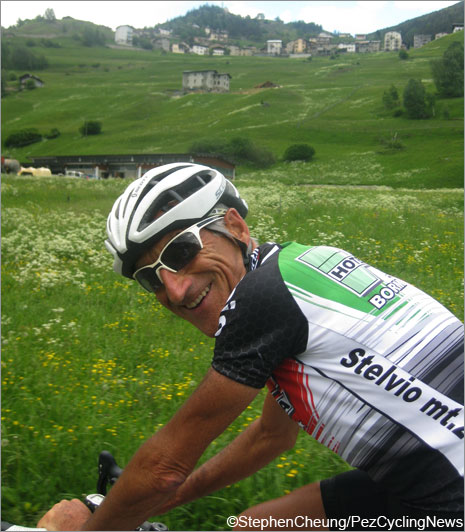 Pez, Leslie and I bail at the 100km point, but Stephen is one of a hardy bunch to drill the final 30kms, uphill, into a headwind in just an-hour-and-ten-minutes. And he still looks strong! One of the fittest is guide Riccardo, approaching 70 years of age. An ex-pro, an ex-cop and now just blasting away on the climbs better than most half his age.

What a day from Bormio to Teglio and back. Great climbs, great chat, great company. More to come this week. Keep it Pez!

• Check these guys out for your next trip to Bormio: HotelFunivia.it