For much of the English-speaking world, Phil Liggett along with his broadcast partner, the late Paul Sherwen, was the commentator who was as much a part of professional bike racing as the riders and team managers and Tour de France publicity caravan. Now Demand Films presents a documentary about the life and times of Phil Liggett, MBE, Dr. (Hon.) and rhinoceros enthusiast, playing at your local cinema (at least in Canada) on October 25.

The film, “Phil Liggett: The Voice of Cycling” looks at the impressively long career of the subject, framed through historical footage, his regaling of a local UK cycling club with entertaining stories (he is a superb raconteur), the charity he and his wife Trish support, his current broadcasting work, as well as life in South Africa and England. 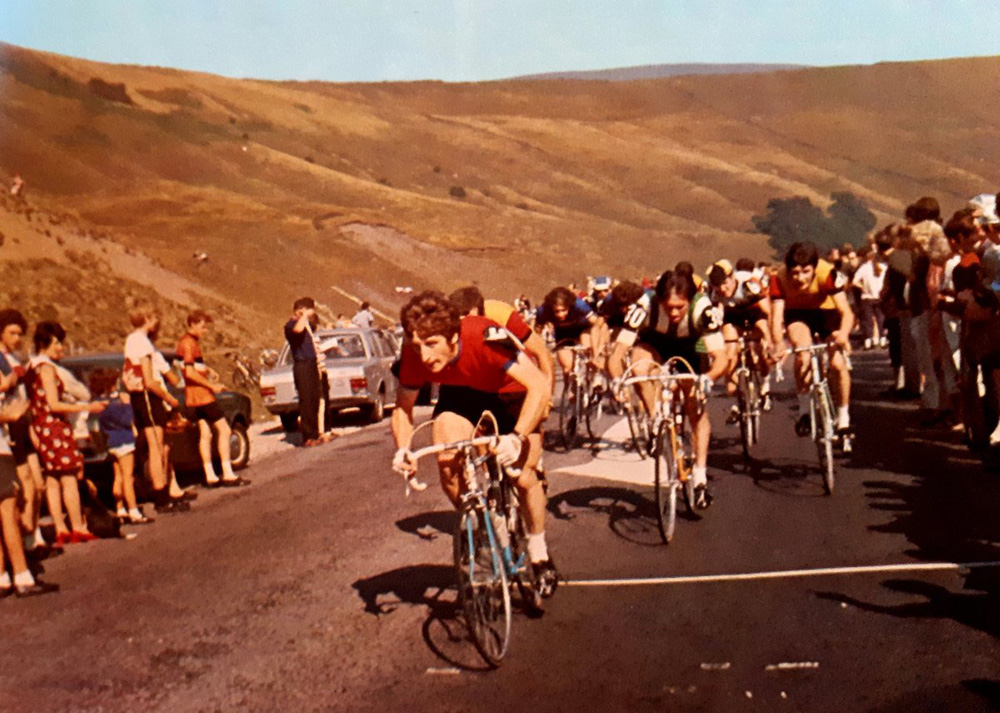 Born in Northwest England 78 years ago, Liggett’s dream was to become a zoologist but the lack of family finances closed the road to higher education. After a short stint as a zookeeper, and realizing that he wanted more from life than shovelling manure, he gradually moved into journalism, coupling his love of cycling with a career. He had discovered that while pretty hopeless at sports, he could ride a bike and could sprint. He raced for 12 years, starting in 1961, and reached the elite amateur level. At 23, a late start, he was determined to find out if he had what it took to be a pro and raced on the European continent, taking part in 48 races and finishing 23, at the same time as Eddy Merckx was concluding his amateur career. Measuring yourself against the Cannibal was a big ask and when he was offered 10 Pounds a week to write about cycling he changed direction. 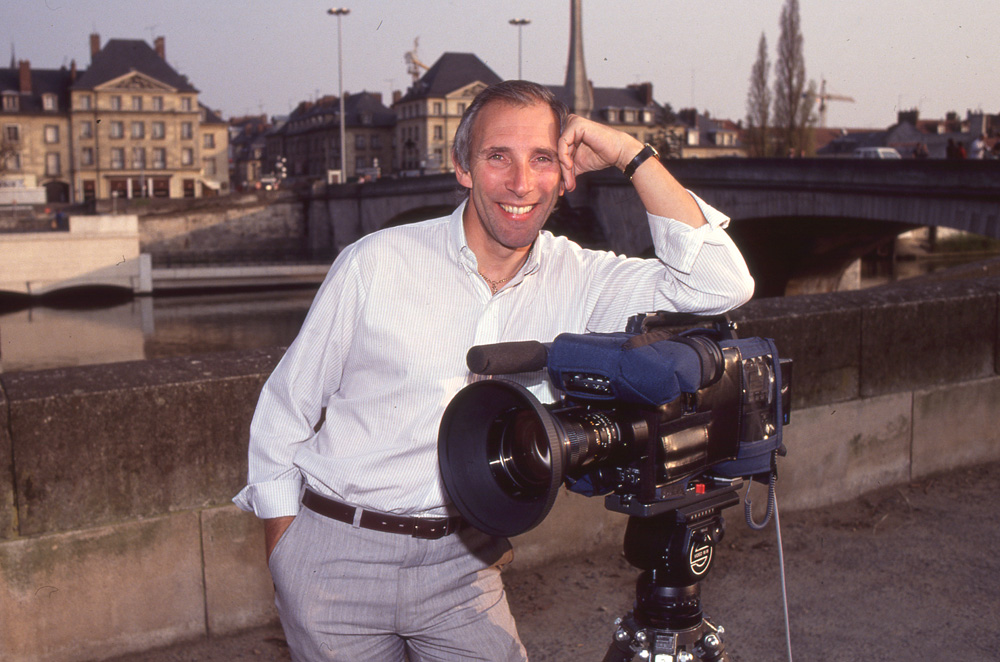 Cycling was central to his life as he continued racing in the UK while reporting on those same races. With his insider knowledge of bike racing, he was asked to do commentating at races and began his career at the microphone, albeit inauspiciously as at the first race he was so focused on watching the start he forgot he was supposed to begin speaking! Expanding his activities, he became the youngest UCI Commissaire in 1973, the same year he was Chief Commissaire for the Tour of Ireland. At that race he informed the riders of the centre line rule and everyone laughed, given the width of Irish roads, asking themselves if he had ever actually been to Ireland. In spite of that he clearly had organizational talent and took on the role of Race Director for the UK’s top level event, the Milk Race, from 1972 to 1984. 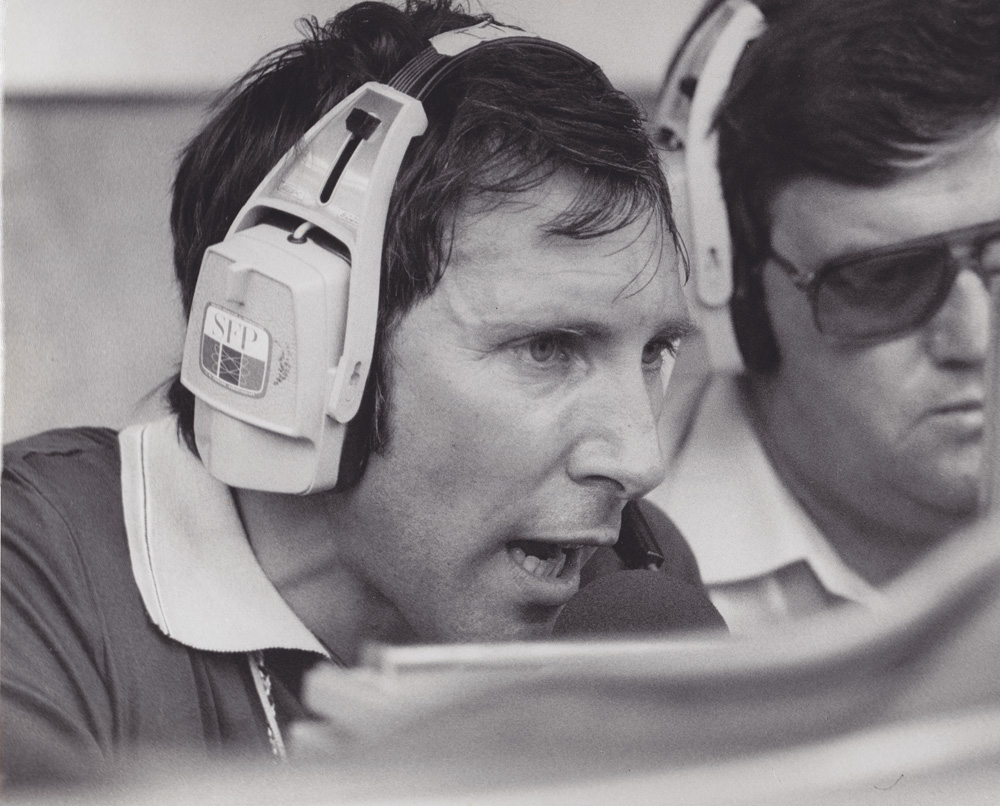 His Tour de France career began in 1973, when ITV sports broadcaster David Saunders, offered him the opportunity to come to the race as his driver. Saunders, whom Liggett thinks knew nothing about bike racing and had probably never even ridden a bike, was a terrific mentor, although Liggett never spoke on any of these rather shoestring broadcasts. Saunders’ calm voice would be familiar to many of us as the narrator of “A Sunday in Hell,” the brilliant documentary about the 1976 Paris-Roubaix race. Saunders left for a plum broadcasting job in 1978, leaving Liggett alone to cover Paris-Nice that year. Sadly, Saunders was to die in a car accident on the way to that new job. 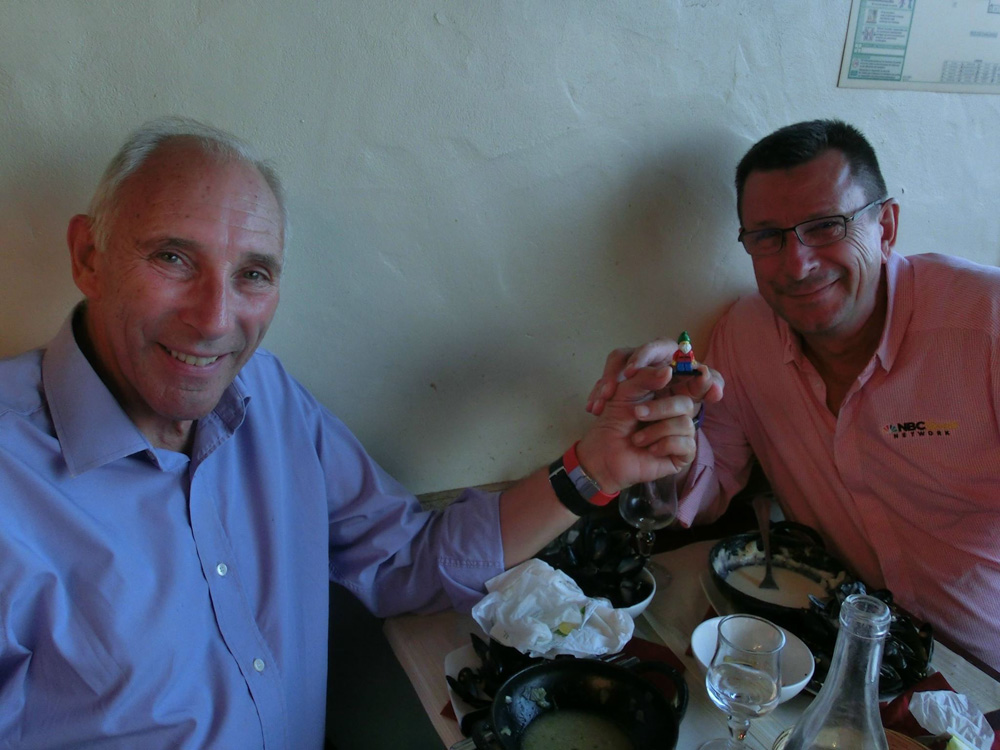 Liggett’s coverage of races for ITV was noted and soon he was working for CBS as well. He was picked up as well by Australian media and clearly enjoys a warm relationship with that country. In 1985 a young racer, Paul Sherwen, joined him in the broadcast booth, and the pair were to continue as a team—the longest-serving broadcast duo in sports history—until Sherwen’s sudden death in December 2018, 33 years later. They made an entertaining pair, with Liggett’s calm and avuncular approach balanced by Sherwen’s humour and analytic skills. Sherwen claimed he was merely Phil Liggett’s driver and Liggett claimed to simply hate Sherwen’s choice of music he was forced to listen to in the car but it was all part of their appeal, as comfortable as old shoes. The pair were heard around the globe as the Tour de France became more international; mondialization meant that they were heard on a live feed reaching 150 countries. With more than three decades together, as broadcasters and as friends, the loss of Sherwen is difficult but Liggett soldiers on. 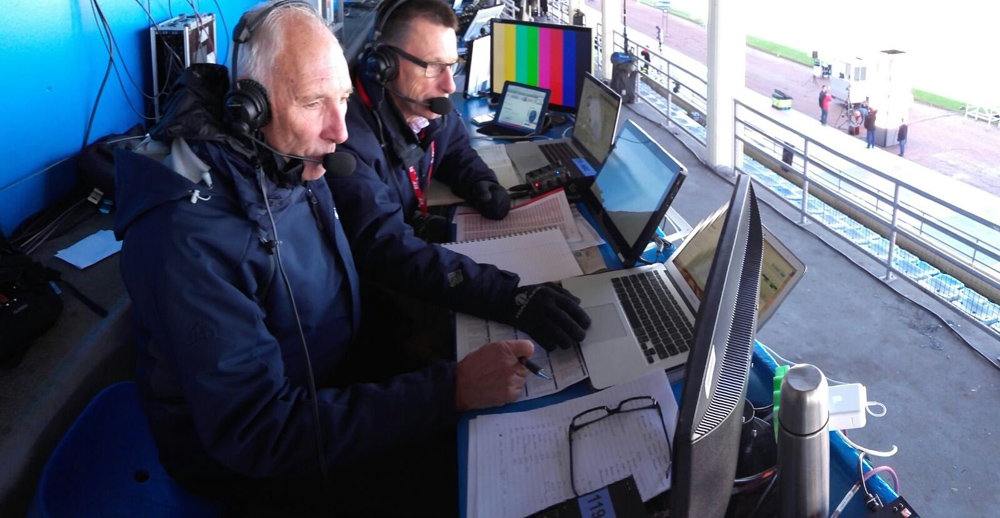 The documentary shows Liggett and his wife Trish, who had been his assistant at the Milk Race but was an athlete herself as an Olympic-level speed skater, at their house in South Africa situated on a private game preserve, as well as their home in England. Liggett has never lost his enthusiasm for wildlife and he and his wife are active in promoting rhinoceros conservation with a UK/USA charity, Helping Rhinos, and this aspect of their life is a major part of the video. As Liggett’s broadcasting career winds down, it is clear the couple wish to focus more on this area. In the UK, the couple are shown at home, canal boating or enjoying their hobbies—ballroom dancing for her, model trains for him. Liggett, a dedicated trainspotter in his youth, has had plans to work on his model trains for years but the layout we see in the video is actually a bit pathetic, just trains and tracks on a flat surface. Maybe when he really retires… 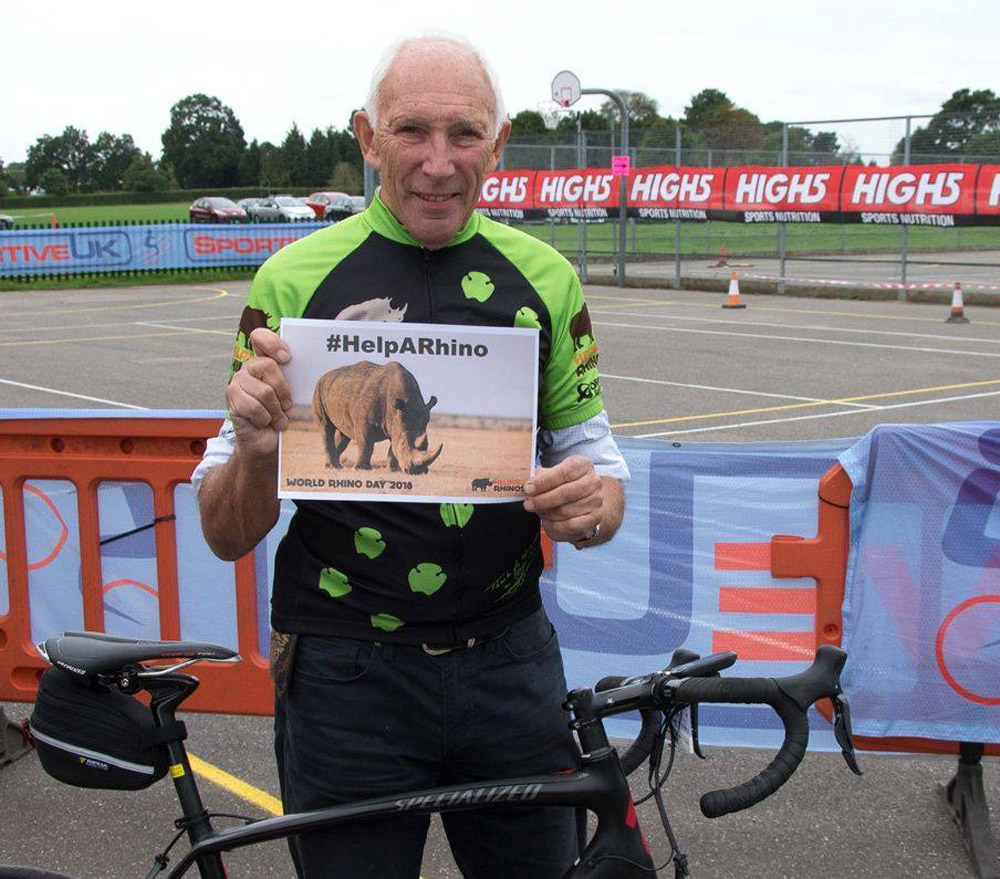 Trish Liggett is unblinking when she says that cycling is No. 1 in Phil Liggett’s life and she has accepted that. However, she has had a cycling career herself, serving as the Team Director for the British team at the women’s Tour de France which ran from 1984 to 1989, and then working with some of the pro teams afterwards. 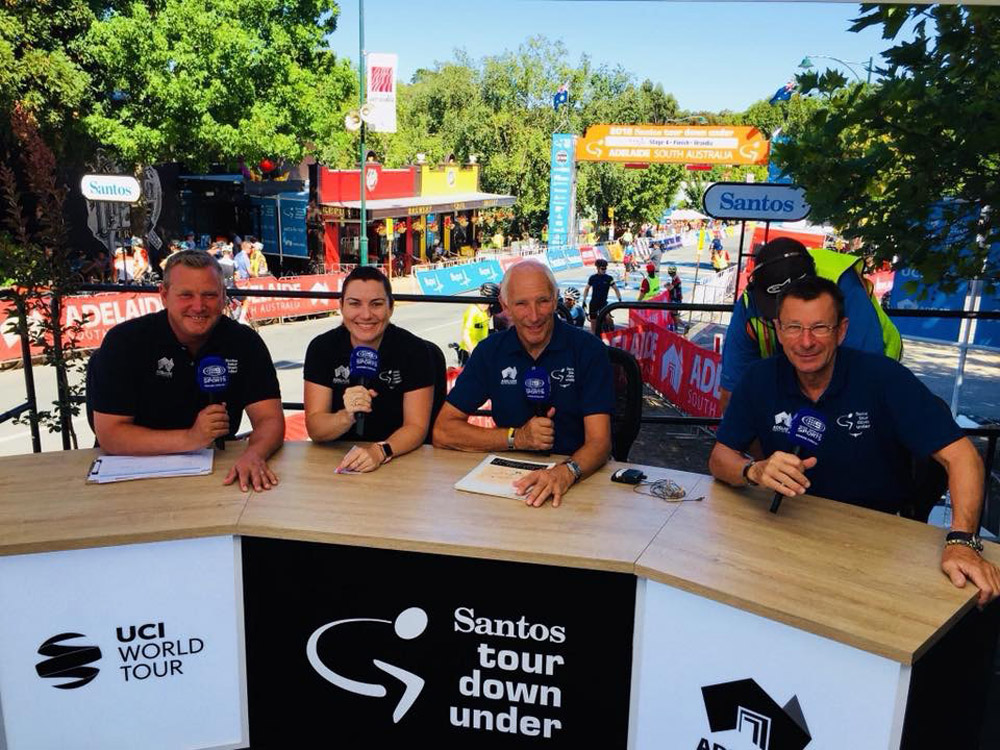 The broadcasting career started to narrow as Liggett and Sherwen were dropped from the Tour de France world feed in 2012 and, with no announcement, ITV broadcasts. They continued with NBC and Liggett remains with that team today, with indication by the producer that he can remain with them for as long as he wishes. 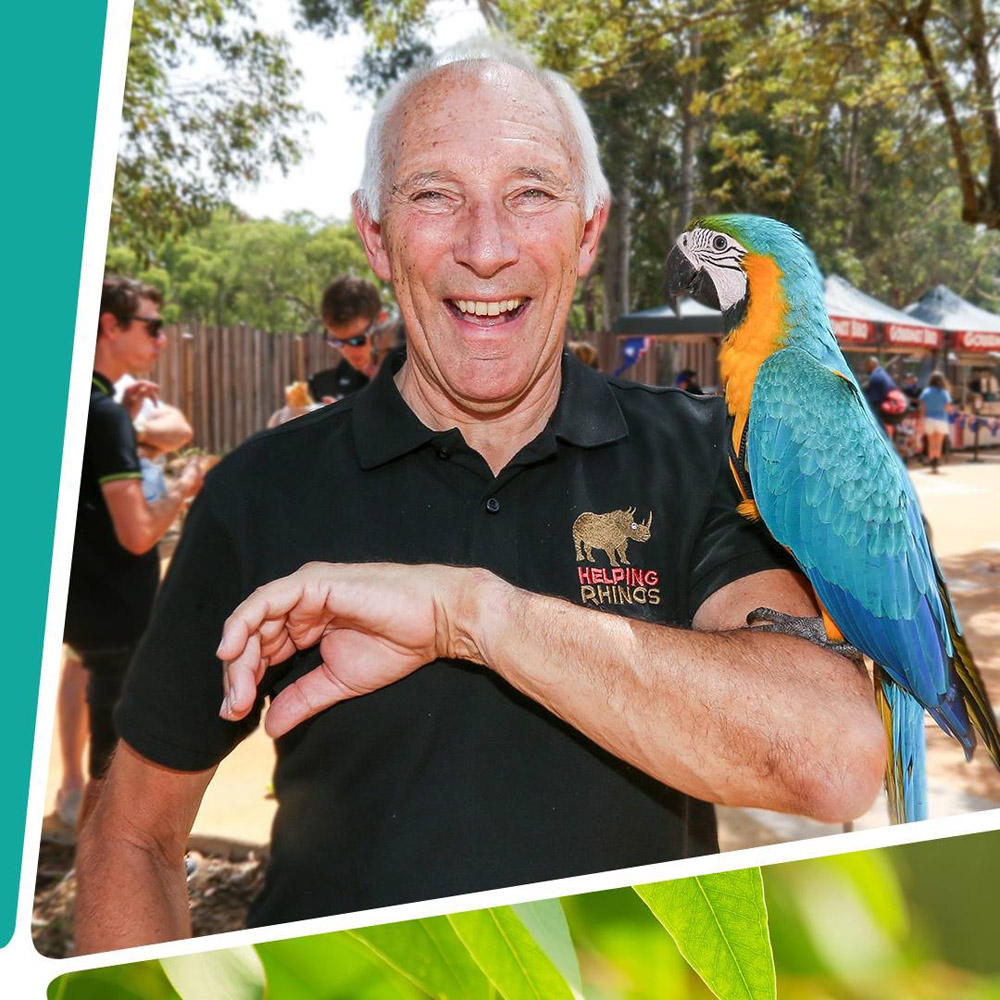 “Phil Liggett: The Voice of Cycling” does not shy away from Liggett’s relationship with Lance Armstrong. He was a huge and vocal supporter of the Texan even as evidence began to mount of the rider’s darker side, being one of the last to believe in his innocence. Liggett’s accusations against USADA, replayed here, make one cringe in light of the evidence that was to come out in the agency’s “Reasoned Decision” of October 2013, and clearly hurt his reputation enormously. UK journalist David Walsh, whose investigation of Armstrong opened the can of worm, unkindly but perhaps truthfully says that you can contribute to conspiracy simply by looking away. One feels for Liggett, a man who truly loves cycling, as he mulls over how Armstrong lied to him. 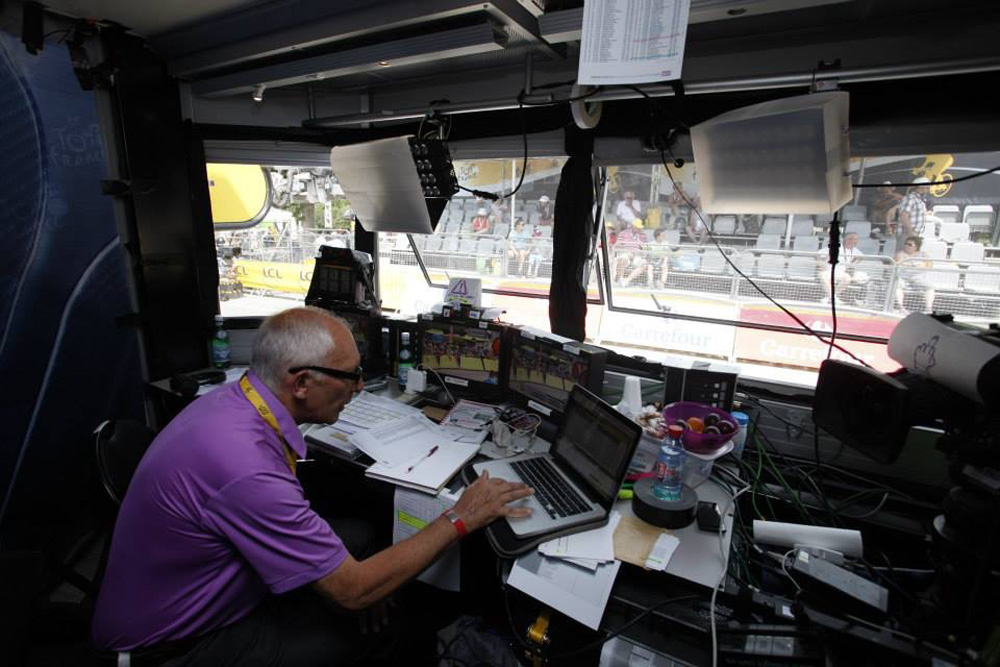 At 78 now (the video’s most recent material is from the 2020 Tour Down Under), Phil Liggett’s story has been one of impressive dedication to the sport. His strength as a broadcaster was never about tactics—regrettably, for those new to pro racing—or pronouncing foreign names correctly but the personal warmth and clear enthusiasm he always brings is endearing, if not always comprehensible. Unlike other sports, there is a lot of time in pro cycling where nothing much happens for hours so broadcasters are really challenged. We all have our favourite “Liggettisms,” such as hearing about a rider “unpack his suitcase of courage.” My favourite has always been his description of Dag Otto Lauritzen at the 1989 Tour de France: “He is dancing on the pedals in a most immodest way,” a phrase so wonderful it became part of the title of a book of Phil Liggett “found poetry” in 2005. 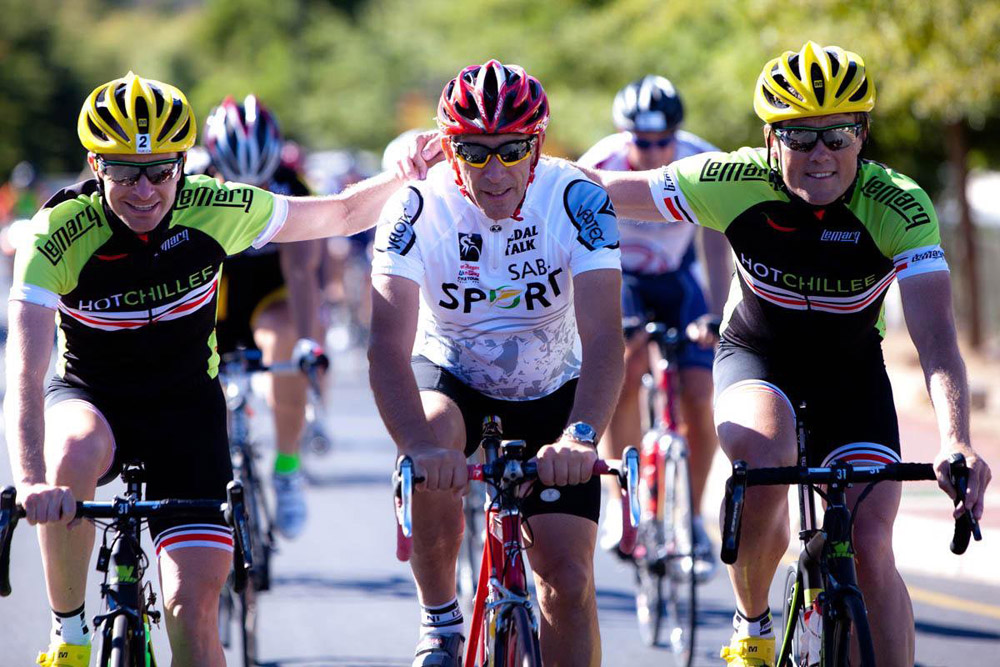 While cycling up the Alpe d’Huez just before the arrival of Tour de France riders on July 18, 2006, I met Phil Liggett and Paul Sherwen, who were stuck in traffic near the top of the climb. We chatted for a while (I did mention the book of poetry!) and one could understand Liggett’s enormous popularity with fans because, well, maybe he himself is cycling’s biggest fan. 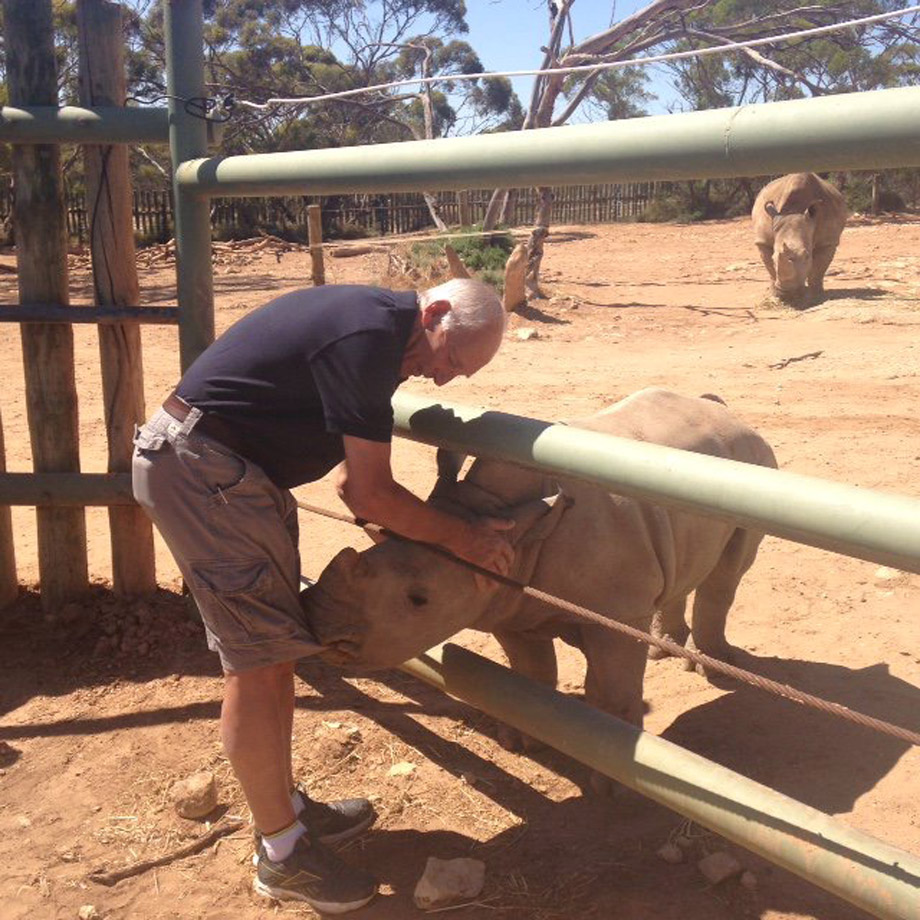 While it would have added to the documentary if the subject would have spoken about the changes in racing he has seen since beginning his race coverage since 1978, “Phil Liggett: The Voice of Cycling” is a fine effort to capture the life and times of someone so familiar to us. Cycling has given him much but in return he has tried to do the same for us as the English-speaking world embraced the niche sport of pro racing over the last decades. Awarded an MBE in 2005 for “services to cycling,” and an Honorary Doctorate by the University of South Australia in 2020, Phil Liggett’s life has taken many interesting turns that the boy too poor to attend university could not have imagined. 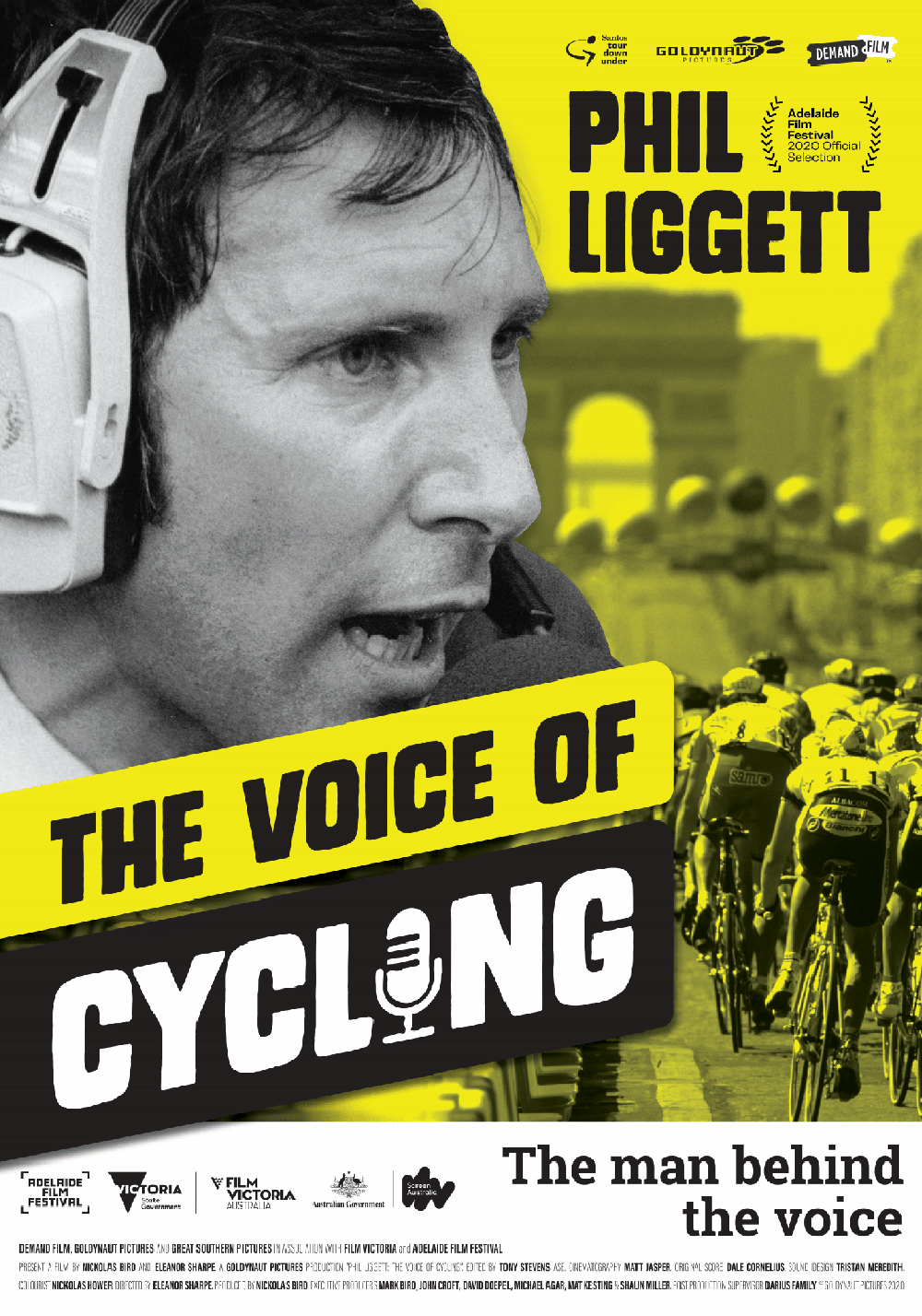 “Phil Liggett: The Voice of Cycling” is screening across Canada on October 25, 2021. Tickets are available only via Demand Film here: https://ca.demand.film/phil-liggett/

For more about Helping Rhinos: https://www.helpingrhinos.org/