Photog’s View: PEZ-photographer at large, Darrell Parks, was in Philadelphia on Sunday for the International Cycling Classic and dodged the storms to take in all the action from both races all around the circuit. Darrell captures the iconic views of the Old Rock Bridge, the Manayunk Wall, Lemon Hill, Kelly Drive and those cobbles. Darrell’s Philly:

They say it has never rained on the Philly bike race in the 31 years of its existence. This year the weather forecast looked set to change that cheerful statistic. Thunderstorms and damaging winds were all but certain in the afternoon hours according to weather reports from numerous media outlets. Let me just say that I was not overly excited upon hearing this news. Now don’t get me wrong, I love the dramatic images I capture of riders racing in the rain, but when thunder and lightning threatens the safety of all involved in the race, I start to get concerned. 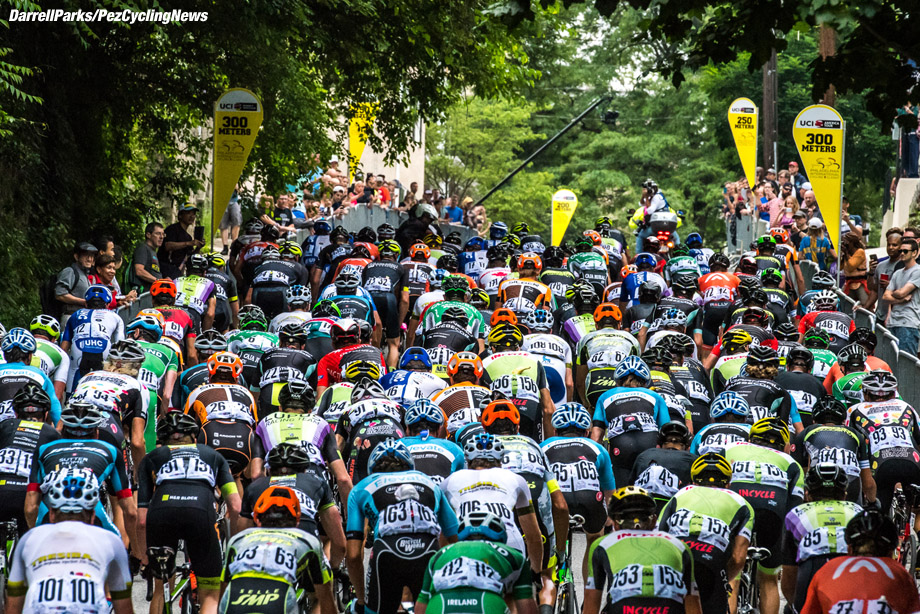 Like many cycling races, Philly is cutting back on race photo motorcycles due to safety concerns. That leaves me sharing a ride for the day with another photographer. I let him take the first couple of laps and head down the hill to capture one of my favorite images in cycling. It’s hard to beat the visual of the peloton stacked up on the Manayunk wall. 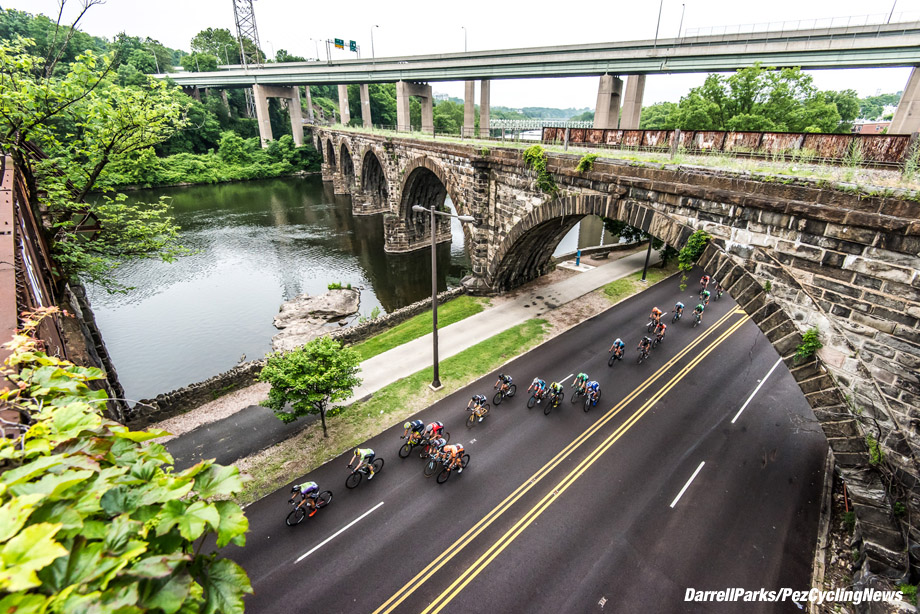 I head back up the hill and take my turn on the moto. The sky is getting darker but we are still dry. We head down to Kelly drive along the Schuylkill river and stop at one of the old stone train trestles. I make the trek to the top of the tracks and scope it out. This is a nice spot to get a few different perspectives of the tracks and the river. In one I catch the Peloton between the bridges. 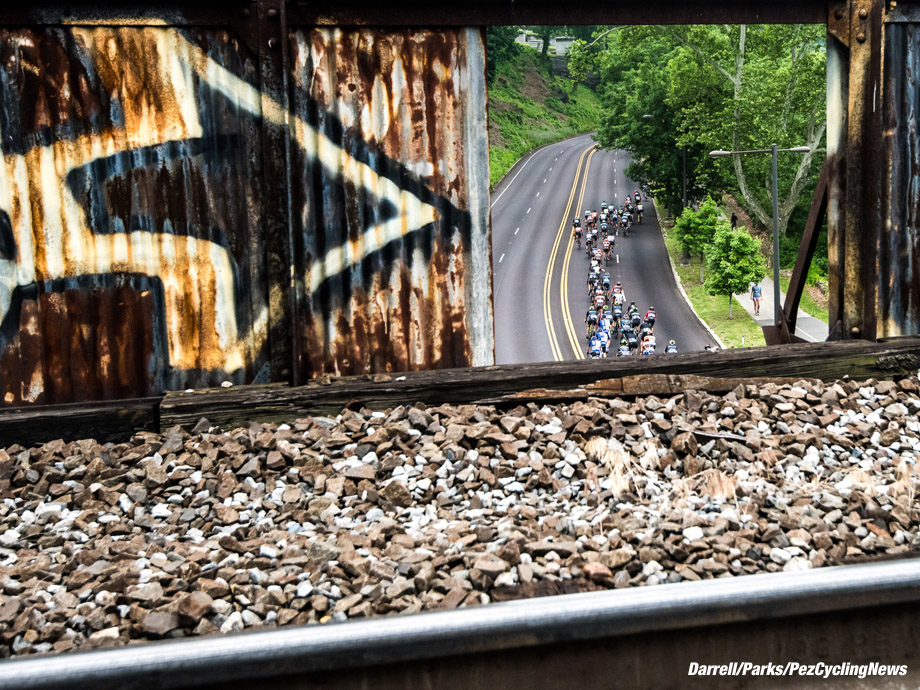 On the other side of the bridge there is an opening in the wall that allows me to frame the race as it rides away from me. A bonus is a graffiti arrow directing the viewers eye towards the race. This view also allows me to avoid shooting the sky that continues to represent a dull shade of grey. 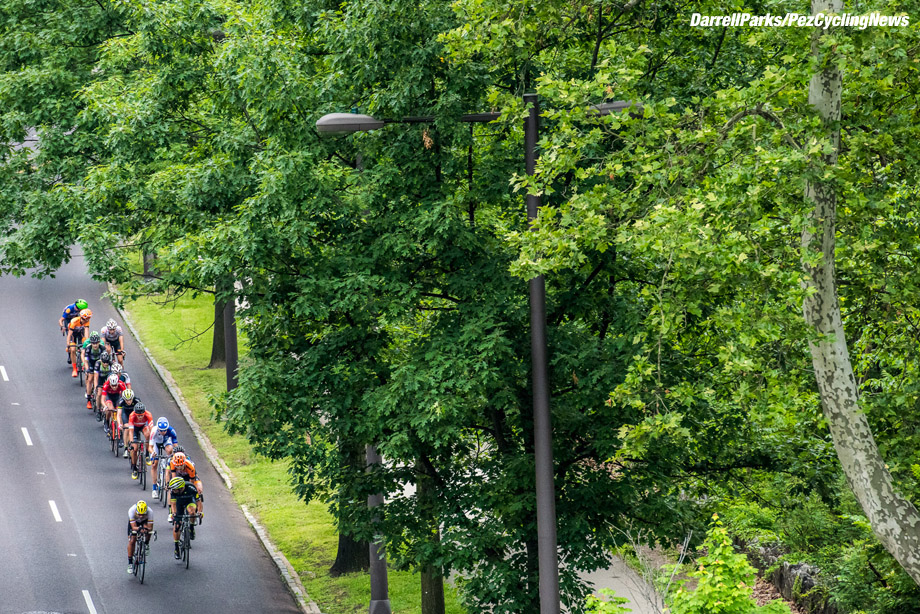 I really like my vantage point from here so I decide to wait around for the race to return from Lemon Hill. I frame the break among the trees lining the road. My view from above allows me to place them in the far corner of the image for a dramatic offset vibe. We’re starting to get a few light sprinkles so I head back to the finish area to get off the bike. 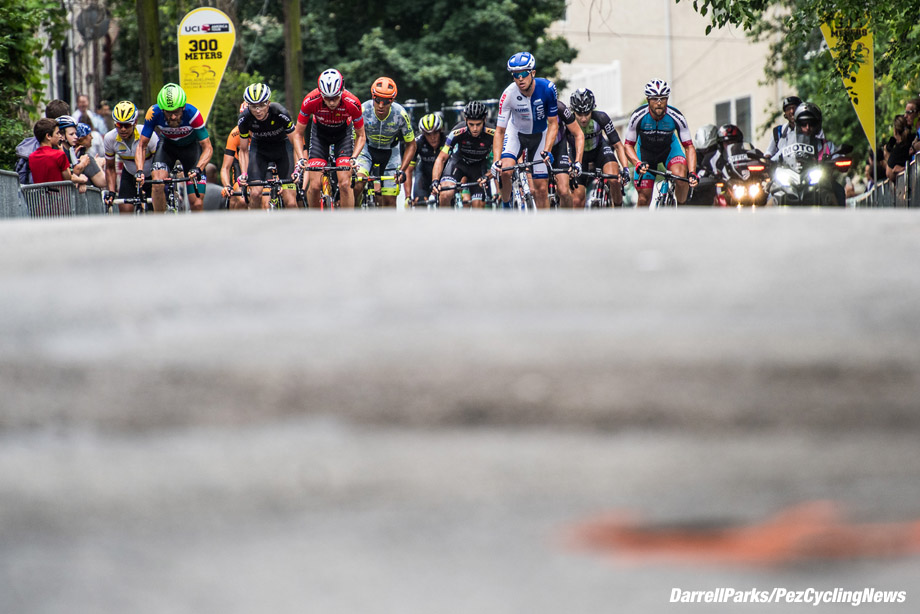 The break cresting the steepest pitch of the Manayunk Wall

I scurry down the hill to a vantage point just above the crest of the steepest part of the Wall. I like to capture the riders as they come into view and before they are completely over the hump. It really accentuates just how steep the climb really is. 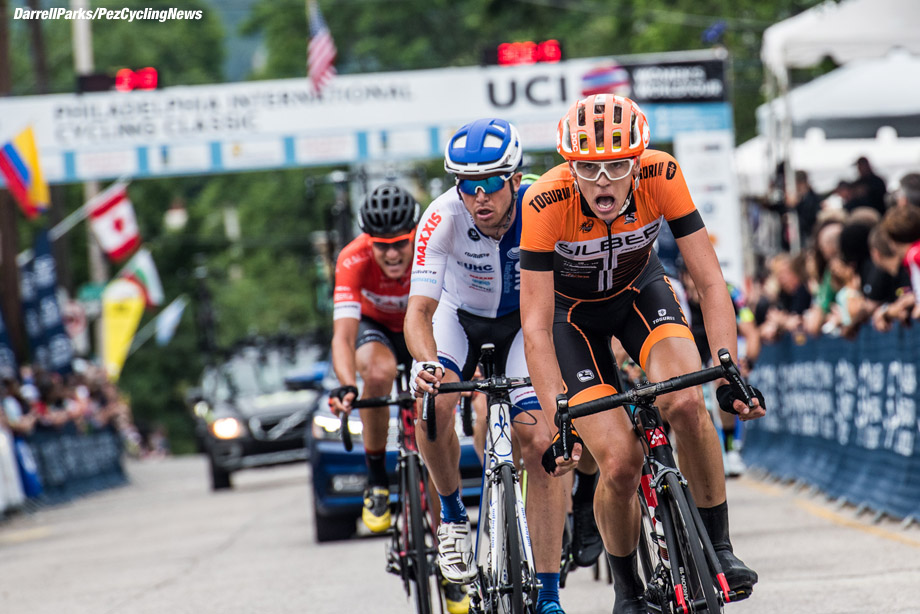 Through the KOM and the riders are at maximum oxygen debt

And if the wall itself isn’t enough, it’s still a slight uphill slog once you get through the Start/Finish line and eventually make the right hand turn to begin your descent back down to the river. This is where the pain faces really start to materialize. It’s beginning to get a bit warm, but the light drizzle is helping to make it somewhat tolerable. 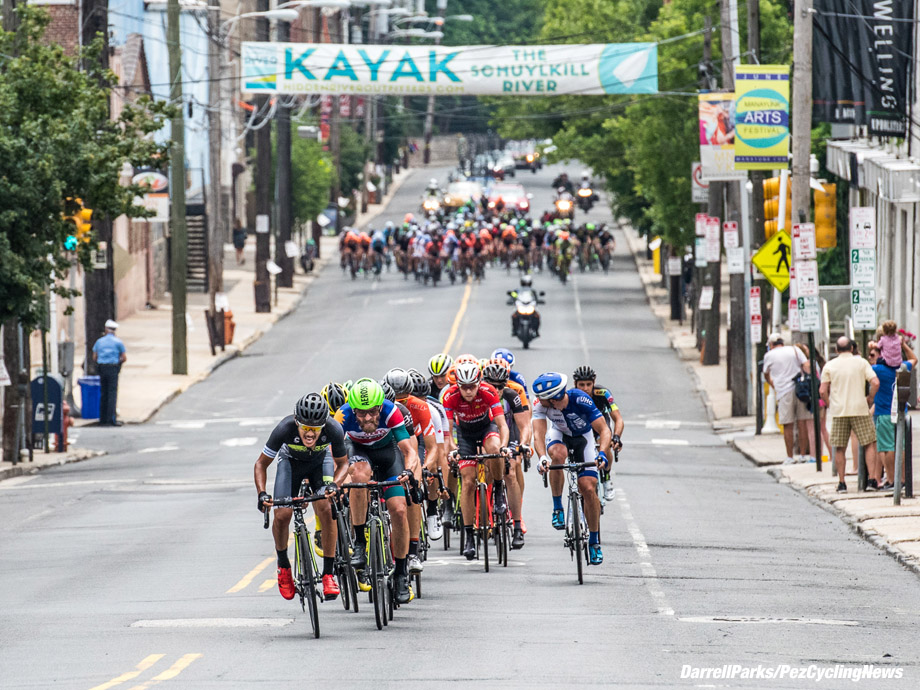 The drizzle has subsided and I’m getting a bit warm so I decide to remove my rain jacket and hop back on the moto. I tell my driver that I’d like to get some race action photos so we need to get in front of the race. Fortunately the Philly course has a section that allows you to get around the peloton safely without actually having to pass them. The race briefly leaves Kelly Drive before returning just before reaching Lemon Hill. We follow them to this spot and stay on Kelly drive to beat them to Lemon hill. As we head back into Manayunk I capture this image of the Peloton bearing down on the break. 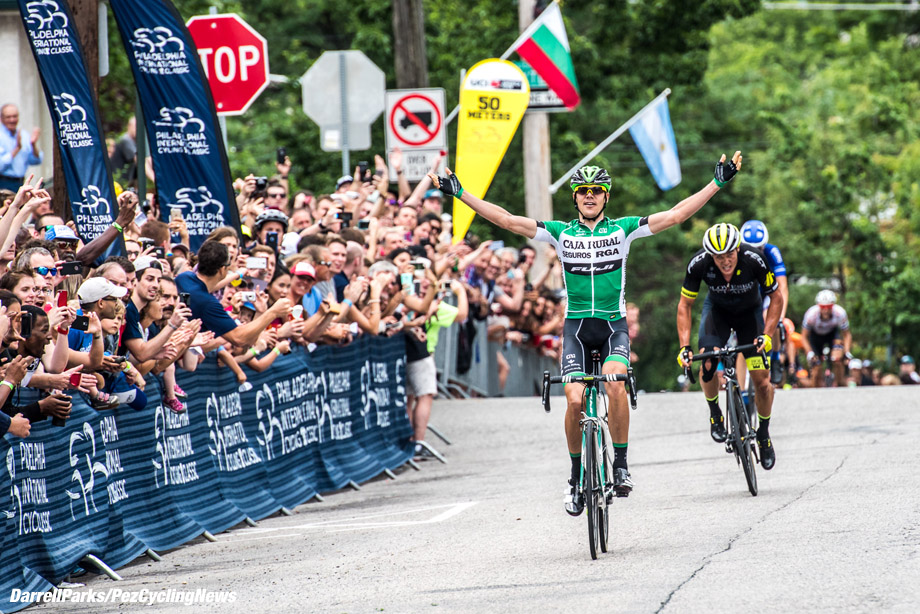 Back at the finish and no rain in site. We wait to see who shows up around the corner and over the hill. It looks to be another big win for the Caja Rural squad as their man Eduard Prades takes the win over Holowesko rider Travis McCabe. 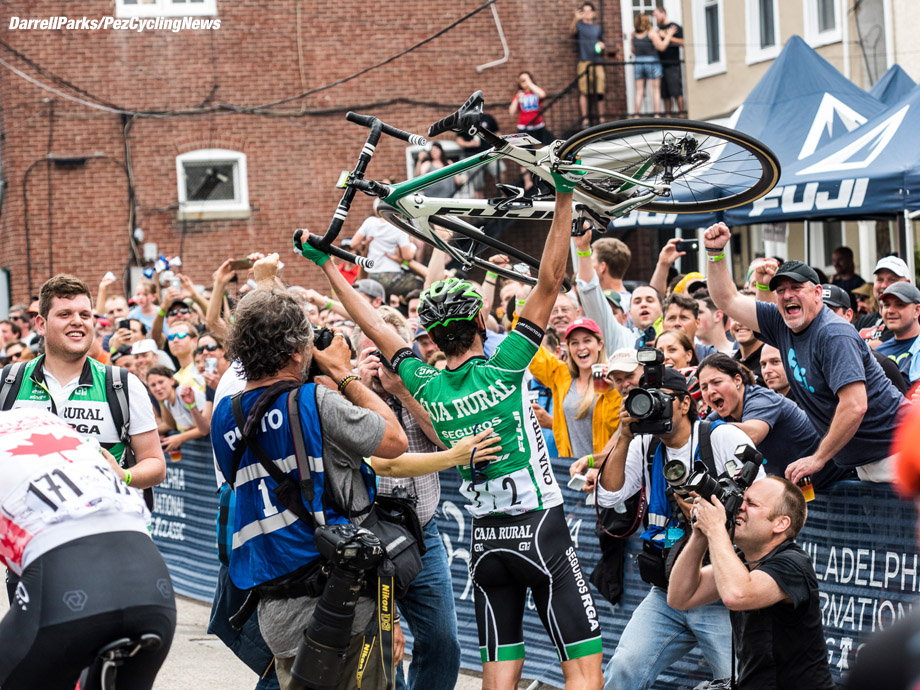 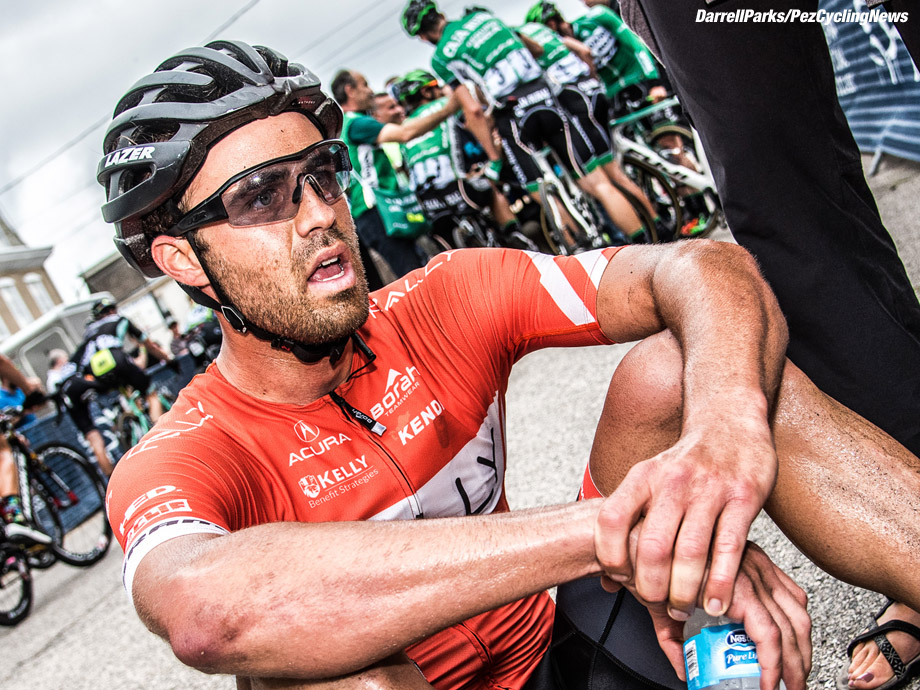 The Caja Rural-Seguros RGA team celebrates the victory in Manayunk oblivious to the carnage around them. Riders are strewn about on the ground gasping for breath and grasping for water bottles. Nothing left in them but blank stares. They’ve given it there all and have nothing left. 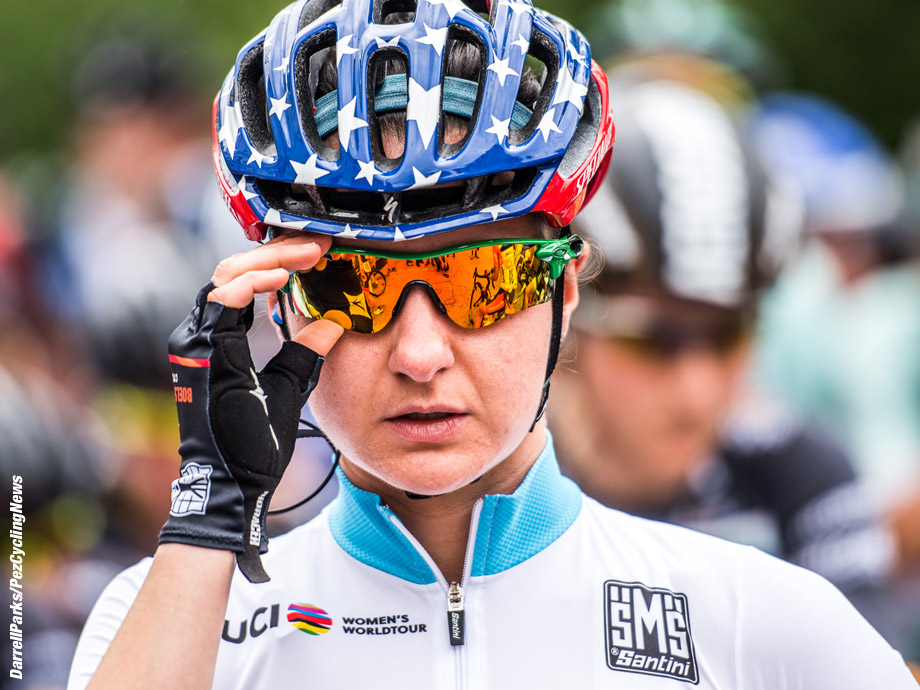 I always like to shoot the call ups but you never quite know what to expect. Is the TV cameraman going to be in my way the entire time? Are the riders going to stop talking to each other and stuffing power bars in their mouths? Is Brian Hodes going to stop shoving his wide angle lens into their faces and get out of the way? Sometimes you just need to be patient and keep your eye on your subject. This time it paid off and I came away with a great portrait of the USA champion, and race favorite, Boels-Dolman’s Megan Guarnier. 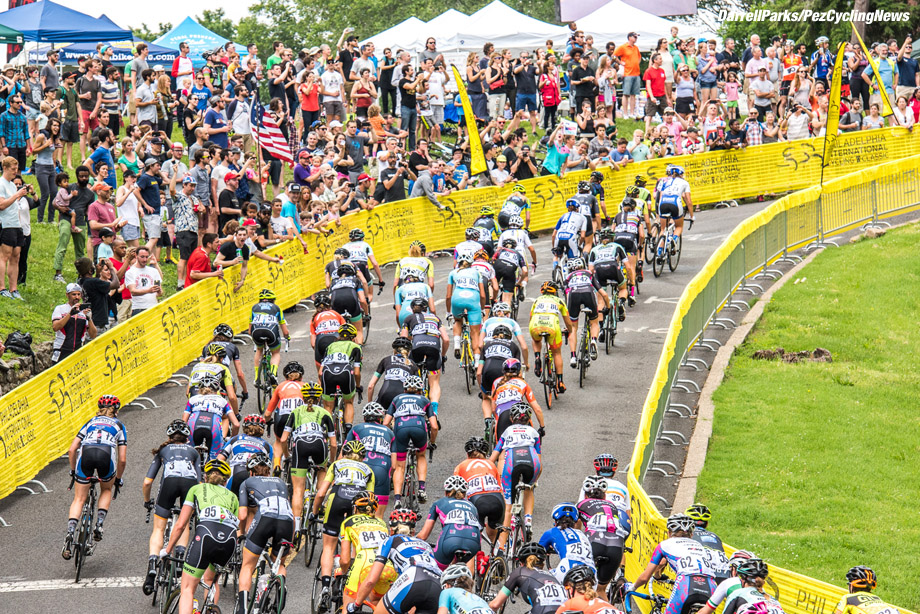 The standard capture of the ascent of Lemon Hill

The race is underway and it’s my turn to be on the moto. We get out on course ahead of the race to shoot the other Philly standard at Lemon Hill. The hill is not as crowded as usual as I suspect the threat of torrential rains has frightened some of the fans away. I take up my usual spot and capture the Jonathan Devich inspired shot with the European vibe. 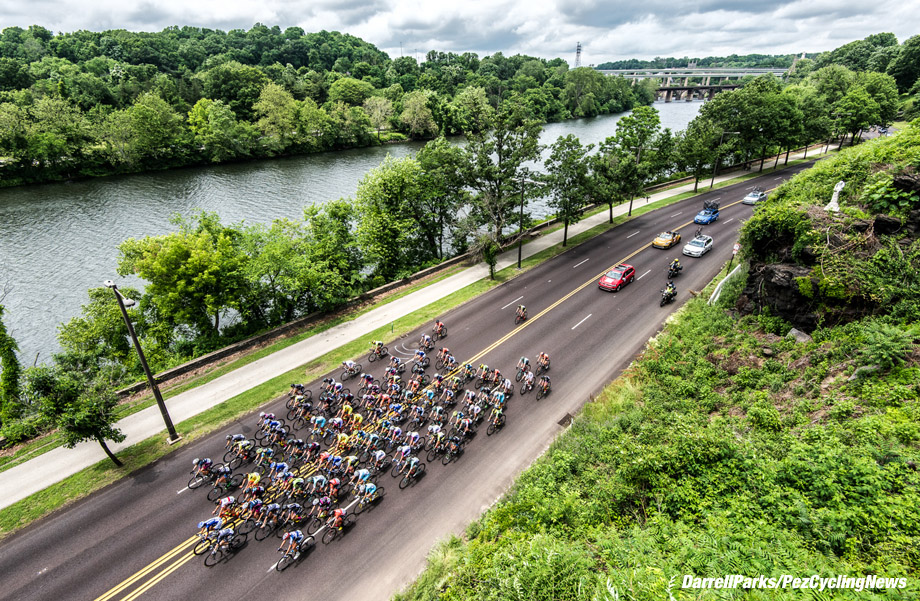 The Women’s Peloton glides along the Schuylkill River

We then head back onto Kelly drive to see if I can get access to an overlook I’ve had my eye on for some time now. It just happens to be located in the Mount Vernon Cemetery. We take a detour down a side street and find an entrance to the cemetery but it’s guarded by the Philadelphia police. He let’s me know it’s off limits to the motorcycle but If I can squeeze through the gate I can go inside. 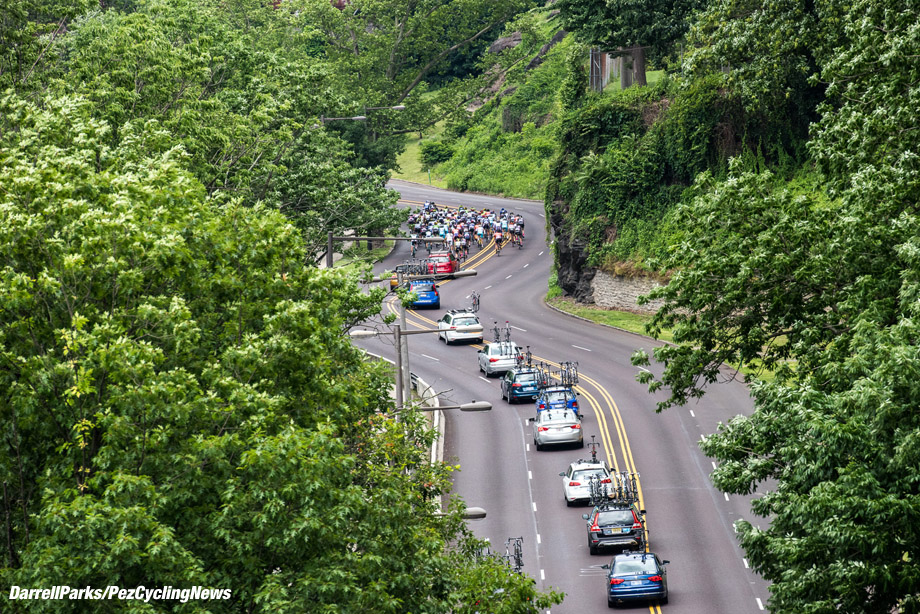 Another glimpse of the Peloton from the Mount Vernon Cemetery

The gate happens to be locked with a chain which is loose enough to create about a 12 inch wide opening. It’s a tight squeeze with all my camera gear but I manage to make it through. It’s still about a 5 minute hike to the vista so I hustle up the hill to the overlook. It’s fairly high up and the views are spectacular. Oh, and did I mention the sun actually came out! I grabbed a handful of scenic shots and hustled back to the motorcycle. 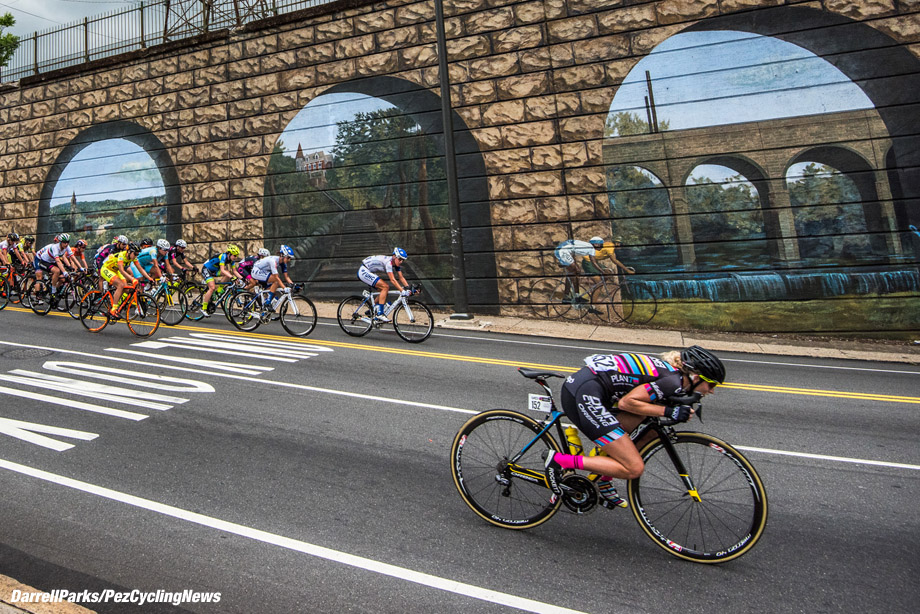 On the way back to the finish we stopped to take a shot of a mural depicting the stone bridges with some cyclists in the foreground. I’ve taken plenty of shots at this location before but they just never made the cut. This time one of the riders was out in front and on my side of the road. It was exactly what I needed to make the composition work. Sometimes you just get lucky. 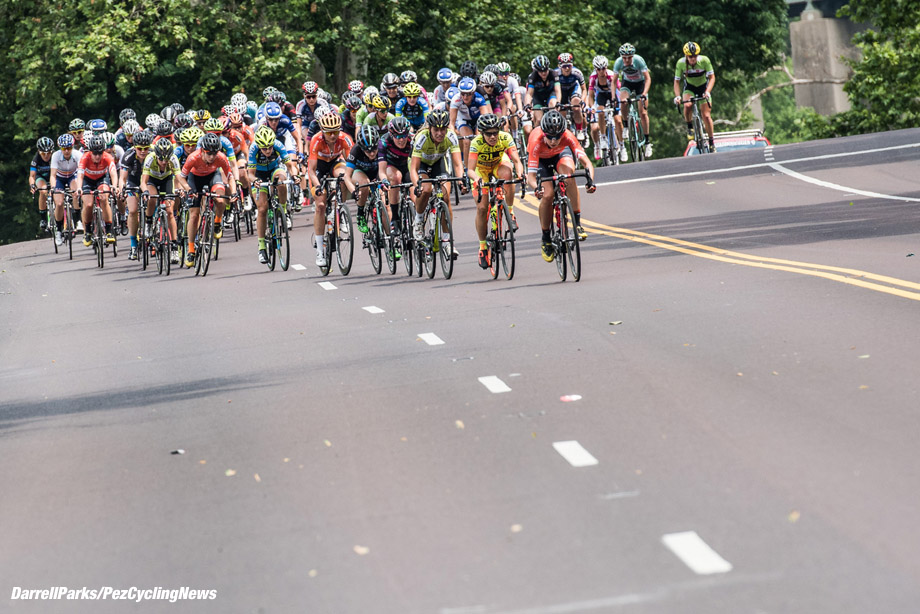 The women get aggressive in the sunshine on Kelly Drive

Back on Kelly Drive it’s time to shoot a little race action. Here the women are ramping it up on their way into Manayunk. They all want to be in a good position up front when they make the turn onto the wall. Oh, and that is the sun shining during the part of the day that was forecast to have the most extreme thunder storms. 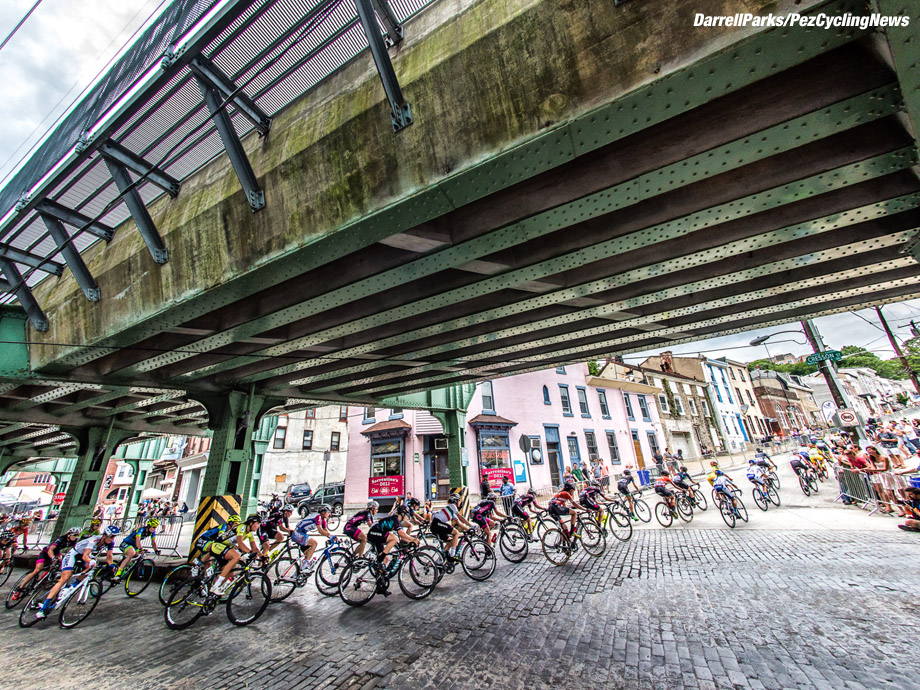 And now for the third in my series of must have images from the Philly Classic. Leaving the cobbles behind as they begin the climb up the infamous Manayunk Wall! The elevated train tracks make this one pop. 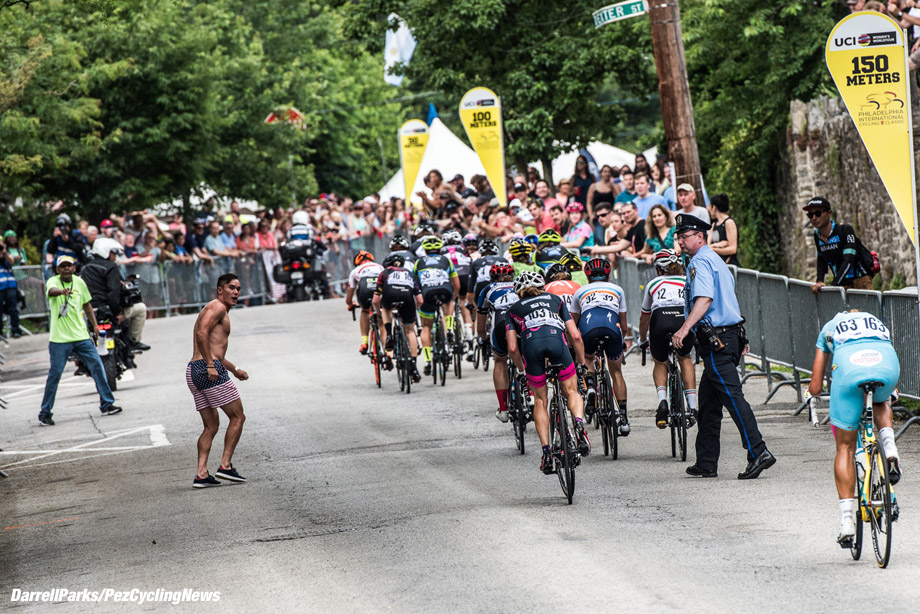 As I make my way up the hill I see a course marshal and a policeman trying to get a fan off the course as the women make their way up the climb. Wait, that’s no ordinary fan. That’s Travis McCabe, second place rider in today’s mens race! Nice Red, White, and Blue shorts Travis. 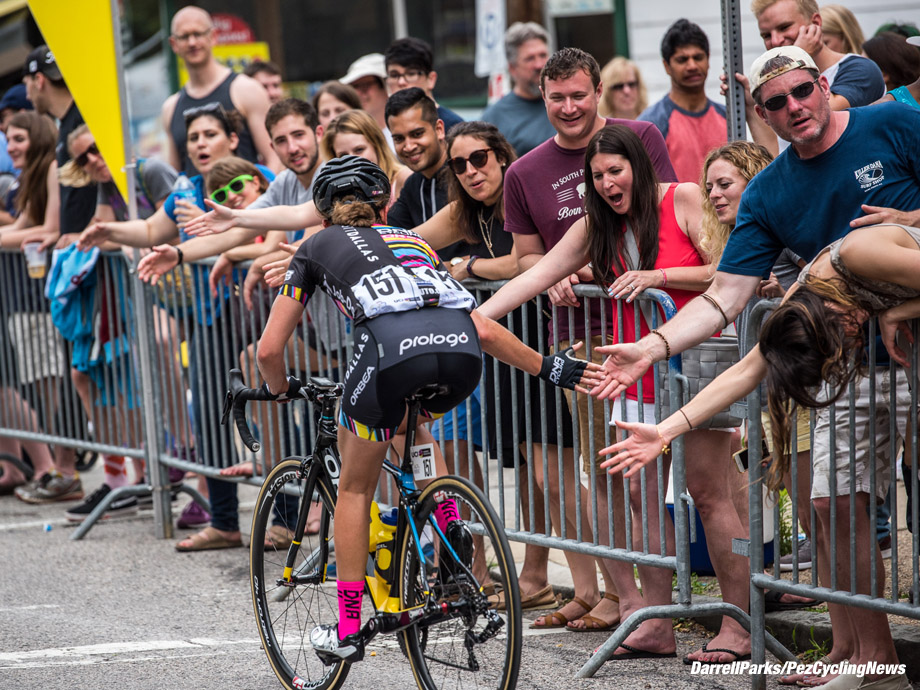 Time to head back to the finish and I capture some of the stragglers interacting with the crowds. Some are giving high fives, some are grabbing beers, and some are just plain struggling to get up the hill one last time. This is truly a race of attrition. 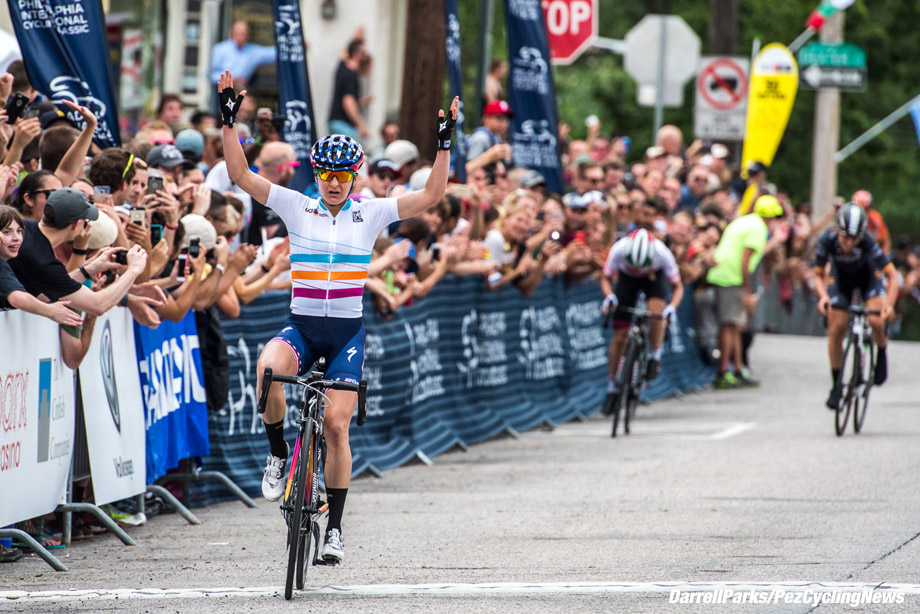 As predicted, current USA Champion and WorldTour Leader Megan Guarnier took the win this year in Philly. Not as predicted, the fierce storms that were to disrupt the race all day never showed up until about an hour after the race had finished. Apparently it really never does rain on the Philly bike race!