You can’t believe everything you read in the media, so we jumped at the opp to join the Phonak training camp in Mallorca last weekend and get to know the riders and staff for ourselves. They had a tough 2004 with rumors flying here and there, so it was good to meet ‘em face to face and make up our own minds… 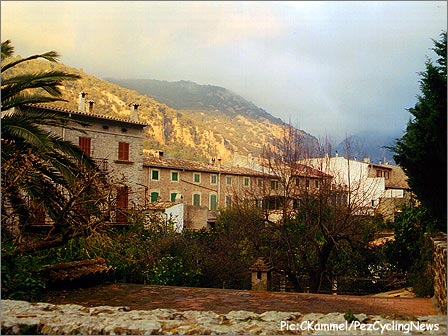 The main difference between these towns on Mallorca and a Spaghetti Western is that the posse here rides carbon – not horses.

Friday night, PEZ pulled into the Mallorca hotel which is serving as the port of call for the two week training camp that Phonak is using to get its guys ready for the racing season which will start at the end of January in Qatar. With dozens of little huts, typical Spanish floor tiling, and grand, wide atriums, it certainly looked like a cycling friendly place. 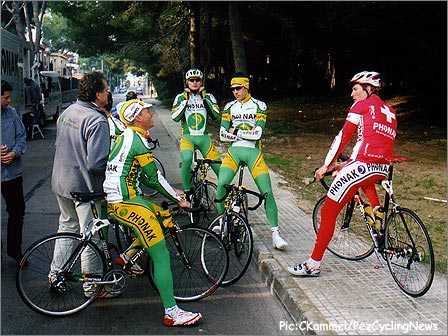 Getting ready for the morning ride.

LIQUID COURAGE? Who Needs It
We arrived after the dinner hour, but still had a chance to meet up with Georges Lьchinger, the PR man, and go over the activities of the weekend. We had dinner, and then during after-dinner beers, we chatted with Sharon Worman, and Richard Bryne, who founded and developed Speedplay pedals thirteen years ago, and Jeff Schneider from Easton Sports. Emboldened by the calming effect of the beer, and encouraged by the fact that their English was un-mistakably American, the conversation came easy.

They were pleased that we’d taken the time to come to the camp, especially as the only English speaking journos there. They of course were here to show support for the team – and we’re talking both tech support and moral support. Both Speedplay and Easton make a special effort to form relationships with their teams and riders; and showing up for several days of a training camp is one of the more visible ways they do it. 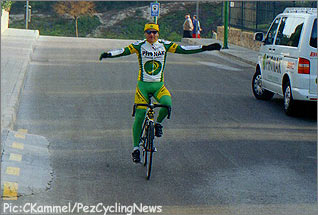 Nicolas Jalabert gets ready for take-off. Remember, he’s a pro – so you at home should always keep both hands on the handlebars!

As intuitive as such a practice would seem, they said that at first some of the riders were a bit wigged out and wondering what was going on – they had never seen a sponsor go on a ride with them before. Crazy.

Unfortunately, our great talk meant that we got to bed about three hours later than I had intended. With tons of interviews coming on Saturday, including a certain number in French, I was feeling the pressure at breakfast. But the atmo was so relaxed, and everyone was so welcoming, that my worries burned away with the morning mist.

At breakfast we sat with Georges, Renй Savary one of the DS, and Rolf Singenberger from BMC. That was cool since Renй is a well-known and successful former road and track racer from Switzerland. He has won stages in the Tour of Switzerland, Tour of Germany, and over a hundred other races on both the road and track. Now he guides the Phonak crew through their preparations and races. And Rolf gave us a bit of insight into BMC and their future plans. We had a longer interview later, but it was interesting to hear their plans for keeping BMC with Phonak, and perhaps efforts to support even another team in the next year.

The Floyd checks his TT set-up.

DOWN TO BUSINESS
Well, with breakfast over, it was down to work. Media day was, after all, for the media to get to know the new team and management at Phonak. There was an hour long conference where the new manager, John Lelangue laid out his agenda and goals for this year and the future. Obviously, getting into the ProTour is a priority. And restructuring the team and management has been a big step in that direction. And in spite of the troubles the team had in the second half of 2004, their enthusiasm and confidence, beginning with Andy Rihs and running through the management, racers and staff, really makes me think that this is a team to watch and root for. 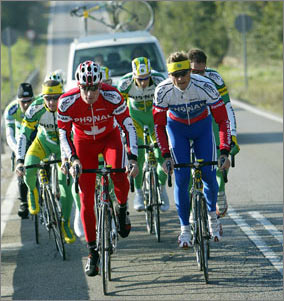 The themes highlighted by John Lelangue’s intro were also touched on by the interviews with riders. Hard work, communication, team spirit and that very French “valeur”, are how they want to define their position in the peloton.

Floyd Landis said it best: “Phonak has the organization, financial support and team spirit to qualify it as one of the top teams in the peloton.”

But, it must be said, we at PEZ tend to be fans first and journos later… and (thankfully) I am the furthest thing from a hard-bitten sports reporter, so we do admittedly get star struck from time to time. In fact, we had lunch with some hard-bitten sports reporters there, and they admittedly seemed less swayed than myself. They may snicker, and repeat some of the rider-responses with a curl of the lip, but I gotta say, I’m sold. Hey, I didn’t come all this way to piss on my own religion. I want to see Phonak succeed because they do have the know-how, commitment and transparency to make it work in this crazy sport.

FALLING IN LOVE WITH BMC
But, as cool as it was to talk with Lalangue, and get some good questions going with Floyd and Nicolas (stay tuned for those interviews), for me, the best was yet to come. 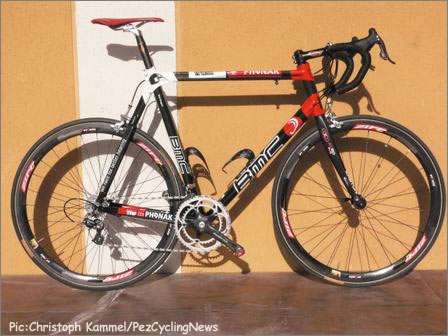 It always looked super cool, and very distinctive in the peloton. I must admit, for myself, green and yellow has never been, shall we say, my favourite combo. But this weekend, I was able to get up close and personal with the BMC STL and we’re not just talking about falling in love with it; we’re talking marry and having babies. The Swiss champion paint job is what won me over. Love at first sight.

But we’re not just judging a book by its cover, here. This is some of the most advanced research and production methods currently being used today. Go back and read the PEZ BMC test ride review, and you’ll get a feeling for the genius in the design.

But talking to Rolf, and seeing the effort, both in stress testing and material production, really showed us what’s inside. BMC made special stress tests to see where the most pressure was placed on the frame, and designed this beauty to diminish or eliminate these stress points as much as possible. 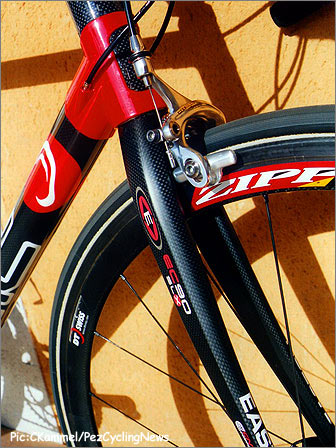 BMC Front end close up: the philosophy behind this year’s improvements on the BMC has been evolution rather than revolution.

Rolf pointed out that with the UCI rules, manufacturers often have their hands tied when trying to raise the innovation bar. But censorship often is the left-handed way of inspiring creativity, and the BMC racing and time trial bicycles are living proof. The time trial Time Machine is as stiff, more aerodynamic, and a kilo lighter than its competition. “It is a bike made-to-measure, with no compromises,” Rolf told us.

THE COMMOTION OVER ERGOMOTION
You may, like me, remember reading about how happy Tyler Hamilton was last year with certain adjustments made to his fit, and the particular effort that was being made to size hisTime Machine into the most advanced and impressive time trial bike in the world today. One of the folks who had a ton to do with that fit, was Alain Ferraroli, founder of the Swiss company, Ergomotion.

We had shaken hands earlier in the day, and I had caught his first name, and the fact he had something to do with the positioning of the bikes. Later in the evening, when we sat down in the hotel bar for some evening drinks after a successful media day, I was sitting next to Alain, and we began talking. He put me right at ease, first complimenting me on my French, and then started regaling us with stories of fitting Tyler, and what would be the best fitting crank for me. Our PEZ Photog Christoph’s French was much better than mine, was able to get the skinny on everything from the brilliance of BMC, to the best way to measure yourself for the perfect bicycle fit.

We were about half way through the conversation before I realized that we were talking to THE Alain Ferraroli, founder and force behind the most advanced cycling-fitting system in the pack.

I gasped as I realized this was the guy responsible for dialling in Tyler Hamilton’s Olympic gold position. In spite of the loud Saturday evening zither music entertainment in the background (well, I guess foreground, since we had to shout to each other to be heard – only cyclists and the elderly use Mallorca at this time of year), and the fact that we were going at it in French, Alain really managed to make his ideas and methods crystal clear. He made me believe that, as the promo goes, his passion really is about correct rider position; so much so that I am scanning the calendar to check out when I can slip in a trip down to Manno, Switzerland, so I can finally get that proper fit.

A lot of effort and passion mix together to make a top-quality cycling team. The UCI, making rules and regulations because they can, forces the teams to be passionate and creative; planning ahead goes hand in hand with damage control, because you cannot always anticipate certain curves in the road. Phonak was handed the shock of its relatively short racing life when it was kept out of the ProTour. But they are not only making the most of what they have, they are making a team that will be competitive in any race they enter this year. I for one hope that we’ll see them July in France. Somehow, it would seem incomplete without them.

Get up close and personal with some of the companies that support Phonak:

For you linguists out there, we have a choice he German, French or Italian…

BMC-Racing.com – and a little English here