Photo Special: Earlier this month Andy Schleck said that he would race no more. The younger half of the most successful brother combination in modern cycling would not turn a pedal in anger again due to the knee injury he sustained in the Tour de France. We pay tribute to the career of Andy Schleck with a photo special.

Andy Schleck announced his retirement on the 9th of October 2014 after a nine-year professional career that saw him compete at the highest level, but without the corresponding palmarés. Was it bad luck or, as many postulate, he was just too nice a person for the cut and thrust of Pro cycling. 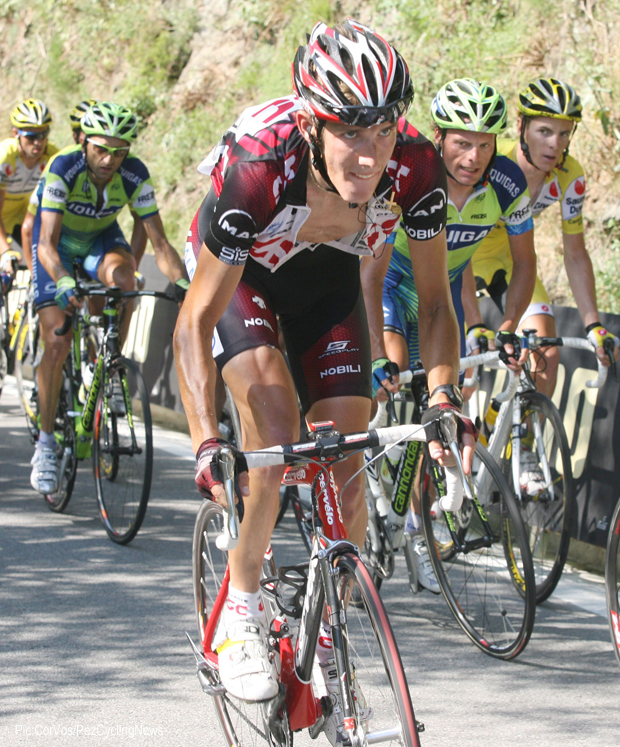 Andy was always going to be a professional cyclist, it was in his blood. His father, Johny, raced as a professional for ten years, he rode the Tour de France finishing in the top 20 twice and won a stage of la Vuelta a España in 1970. Before turning professional he competed for Luxembourg at the 1964 Olympic Games. Andy’s grandfather, Gustav also raced. 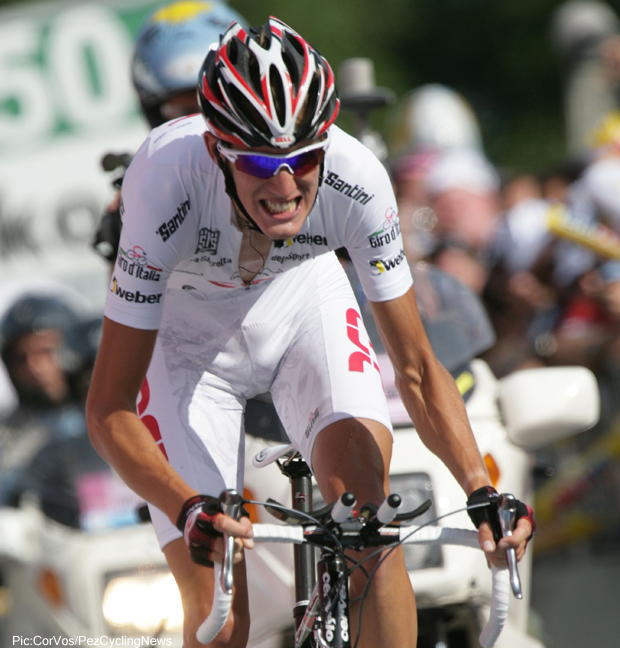 The first of many white best Young Rider jerseys

And I’m sure you know that his elder brother Fränk, who is five years older than Andy, still races for the Trek Factory Racing Team. Fränk turned Pro for Bjarnie Riis’s CSC team in 2003 and Andy joined him in 2005 where they both stayed until 2011. 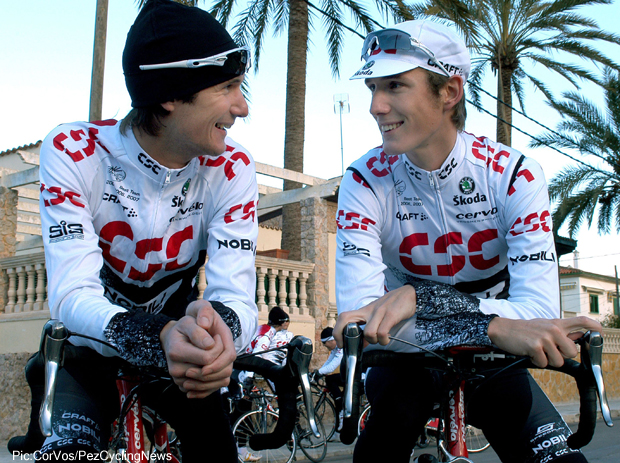 Fränk and Andy always together, the name FrAndy stuck for both of them

As an amateur Andy rode for the French VC Roubaix club and was spotted by the famous Directeur Sportif; Cyrille Guimard who compared him to Laurent Fignon. Riis took note and signed him as a stagiaire for the end of 2004, making him a full team rider in 2005. 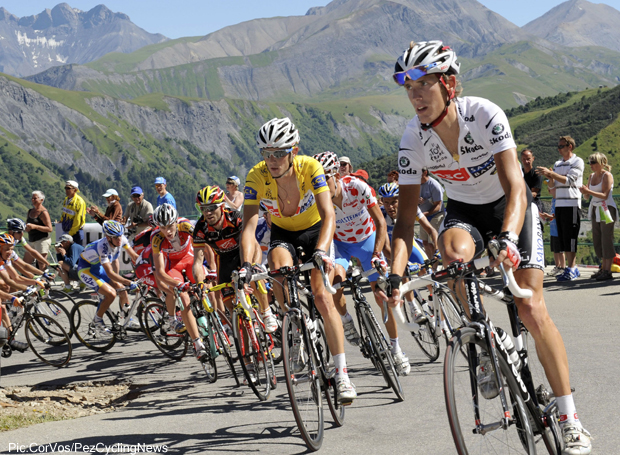 In 2005 Andy won the Luxembourg national TT championship title as Fränk took the road race jersey, the National championships they quite often shared between them. In 2006 he won two stages in the Sachen Tour and the KOM in the Tour of Britain. 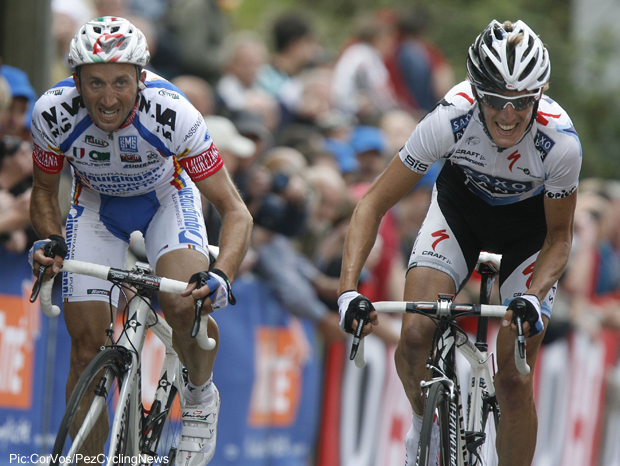 It was in 2007 when he showed his talents on cycling’s World stage with 2nd overall in the Giro d’Italia and the best Young Rider jersey, 4th in the Giro di Lombardia and some other good placing’s. 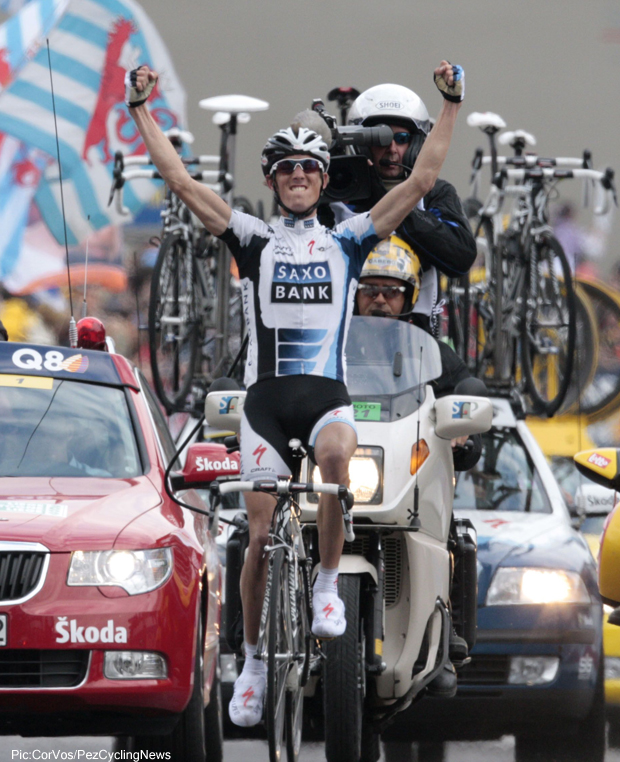 Andy landed the big one in Liége 2009

2008 wasn’t too shabby either; in the spring he showed what he could do in the hilly Classics with 4th in Liège-Bastogne-Liège. Then in the Tour de France he took the white best Young Riders jersey finishing 12th overall after helping team leader Carlos Sastre win the overall and CSC to the team prize. 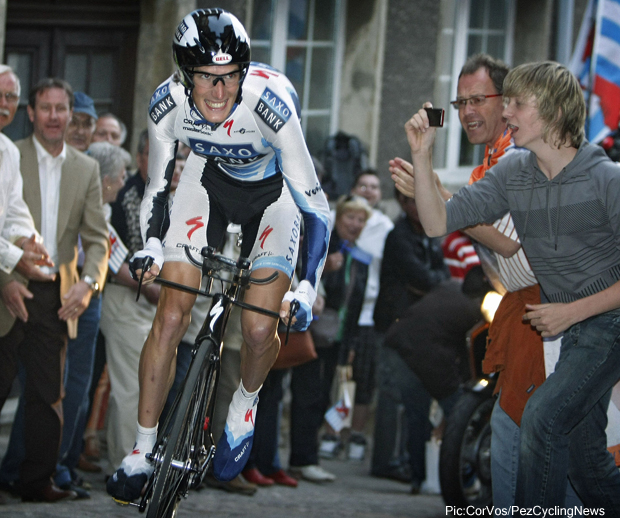 The Luxembourg fans loved Andy, even in a time trial

2009 was also a step up in his career by winning in Liège and taking 2nd in Fléche Wallonne, then in the Tour de France he stood on the second step bellow Alberto Contador wearing the white jersey for a second year. 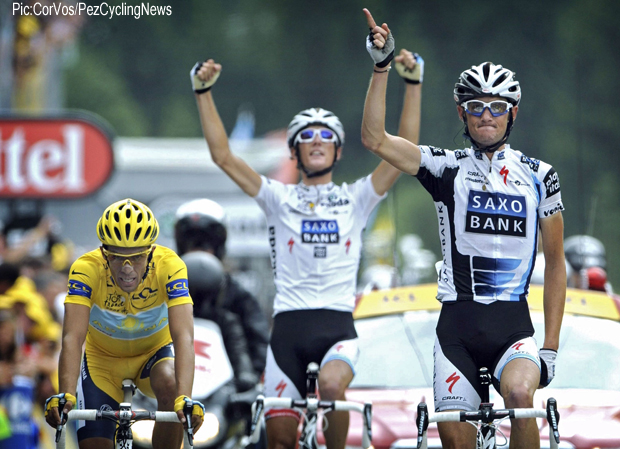 Fränk won stage 17 to Le Grand-Bornand ahead of Contador and Andy, but they couldn’t shake the Spaniard

2010 was a strange year for Andy. In the spring he was 6th in Liège-Bastogne-Liège and 4th in Flèche Wallonne. But in the Tour de France he was 2nd again to Alberto Contador, but there were two very controversial instances that affected the final outcome. In the race Andy was in the leaders yellow jersey when he un-shipped his chain at the same time Contador put in his winning attack. It was calculated that Andy lost 39 seconds due to the mechanical mishap and at the end of the French Grand Tour; 39 seconds was Contour’s lead margin. He also won the best Young Rider competition for the third year in a row. 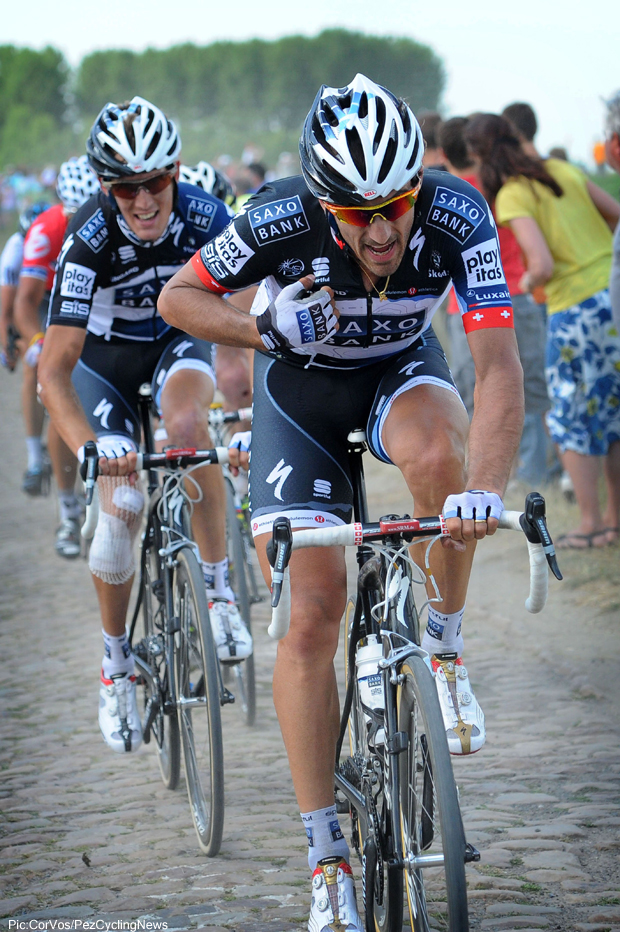 In the end Schleck was awarded the 2010 Tour de France win due to the Court of Arbitration striping Alberto Contour of his results during the investigation into his clenbuterol positive test. 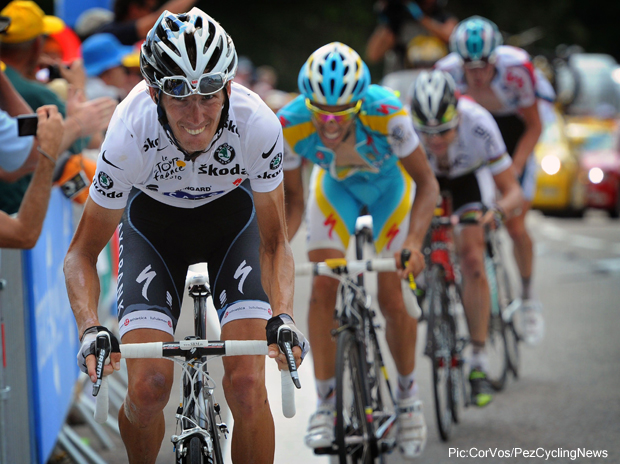 At the end of the year Andy, Fränk and ex-rider and DS Kim Anderson announced that they would set up a new team under the name Leopard Trek for 2011.

Andy was leading the 2010 Tour de France and then…

3rd place in Liège behind Fränk and an unbeatable Philippe Gilbert and the KOM in the Tour of Suisse was a good enough start and when he took the yellow jersey in the Tour it looked like he would confirm his 2010 win. 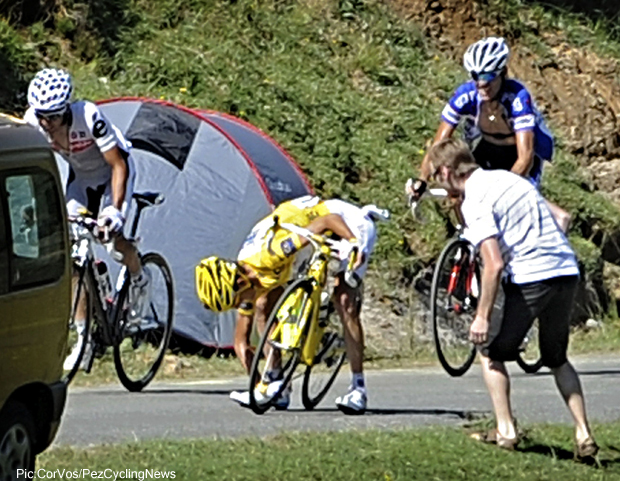 But the second to last stage was a time trial, he could win the Luxembourg TT championships, but up against Cadel Evans he was outclassed and had to stand on the second step again in Paris. Fränk finishing in 3rd place which gave the brothers the solo distinction of being the only siblings ever to podium at the Tour de France. 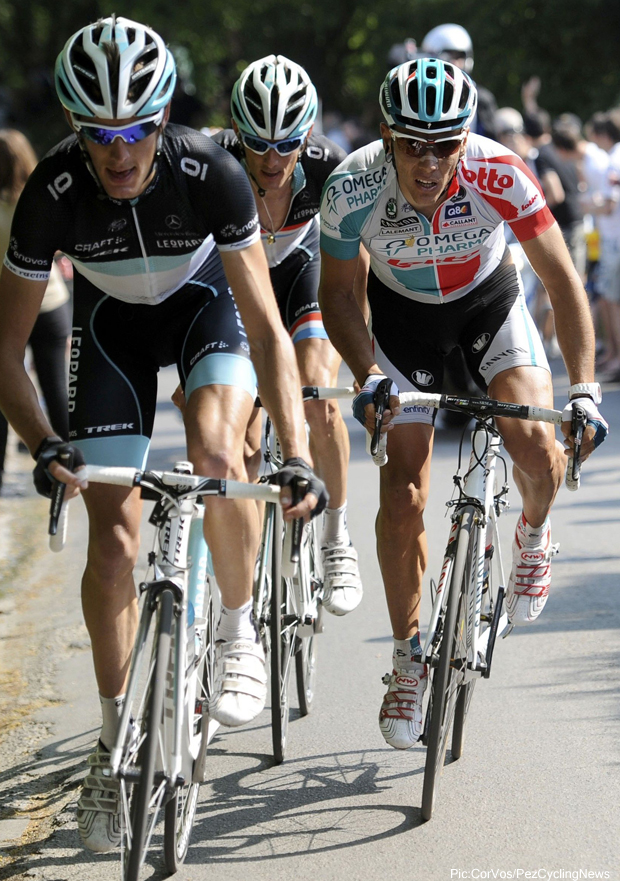 2 Schlecks against 1 Gilbert and Philippe won in Liège

2012 was not a good year and, you could say, was the start of his problems. His Leopard Trek team merged with the RadioShack-Nissan (Trek) team with Johan Bruyneel as team boss. It didn’t work and the team never really gelled and the Schleck’s didn’t get on with the management style of Bruyneel. Things got worse as he crashed in the time trial stage of the Critérium du Dauphiné, fracturing his sacrum and aggravating a knee injury. The Tour was out of the question and the season was lost. 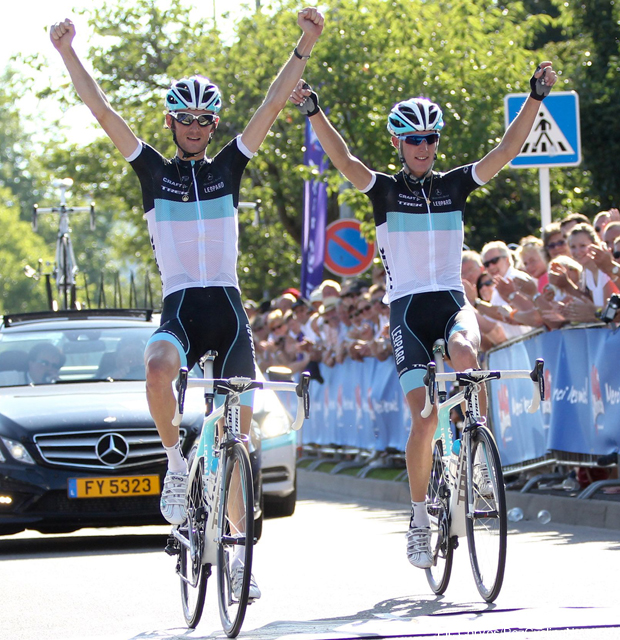 Fränk 1st and Andy 2nd in the 2011 Luxembourg road champs

The scene had been set for 2013: He didn’t finish the Tour Down Under or many other races in the spring, with exceptions being 86th in Flèche Wallonne, 41st in Liège, 25th in California and 40th in the Tour de Suisse. Things didn’t look good for the Younger Schleck, but he rode well enough to finish 20th overall in the Tour de France, suggesting that he could still compete at a high level. 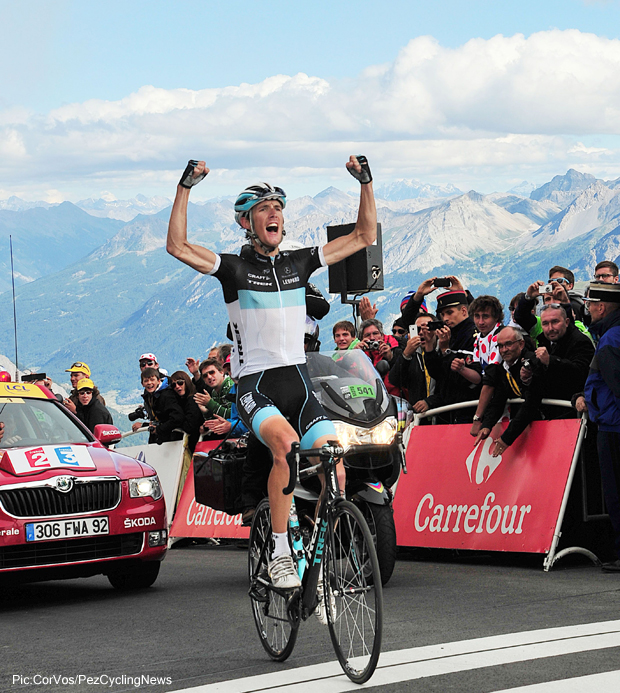 2014 was a lacklustre affair, Andy finished some races: Oman, Paris-Nice, Pais Vasco, Luxembourg and the Tour de Suisse, but never very high. Then he started the Tour de France in England, but a crash on stage 3 saw the end of any hope of a blistering return to the top. 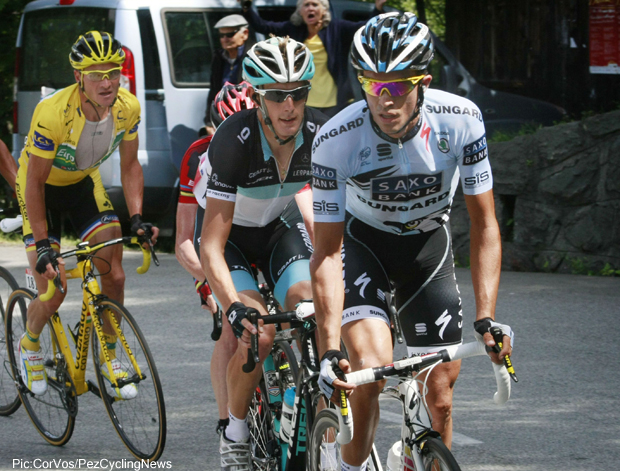 Andy Schleck made the announcement that he would stop his career in October 2014, commenting: “I’m obviously disappointed to end my career like this. I would have liked to keep on fighting but my knee just doesn’t allow it. Since my crash in the UK there has hardly been any progress. While the ligaments have healed, the damaged cartilage is another story. I have been working hard on rehabbing the knee but came to the hard realisation that at the risk of irreversibly injuring it, this is the best course of action.” 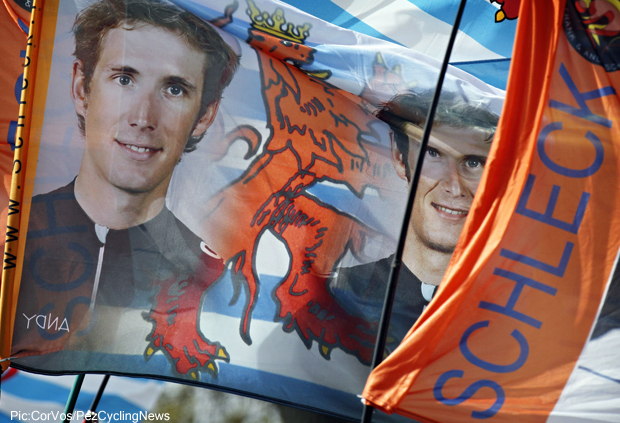 The Schleck brothers had a big following, not just in Luxembourg 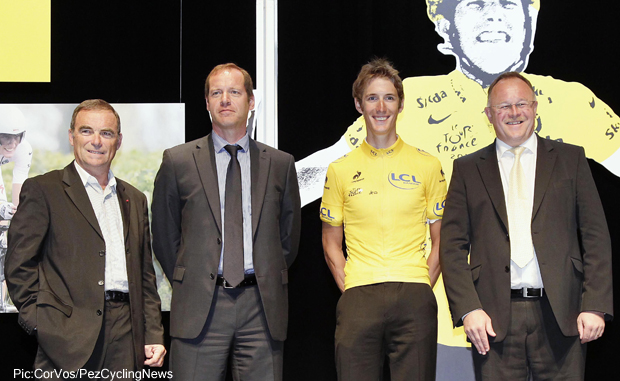 He added that: “Cycling has been my life for many years and I will need time to figure out what I’d like to do. Luckily I can count on my family, friends, and Trek who have always supported me,” he said. “I am very happy to have trained and raced alongside my brother and to have made some of the best friends that I have. I have always said that cycling is not the beginning and the end of my life. I have a wonderful girlfriend and a wonderful son. I’m excited to find out what lies ahead.” 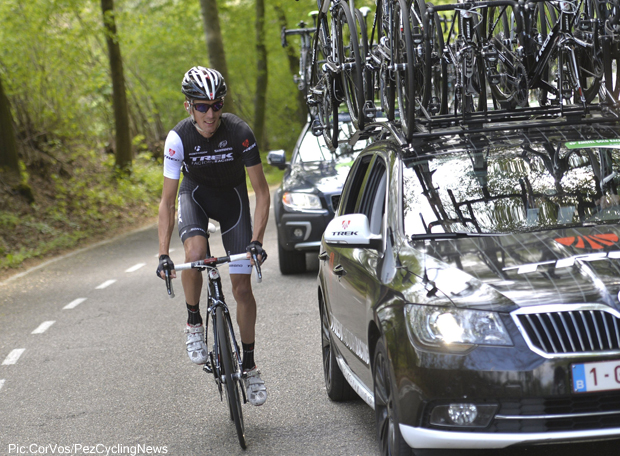 Andy Schleck has hung up his wheels at only 29 years of age at a time when most riders would be coming into their best form. He was well loved by fans and other riders in the peloton and will be remembered for his climbing style and his friendly nature and what could have been a much bigger collection of wins. 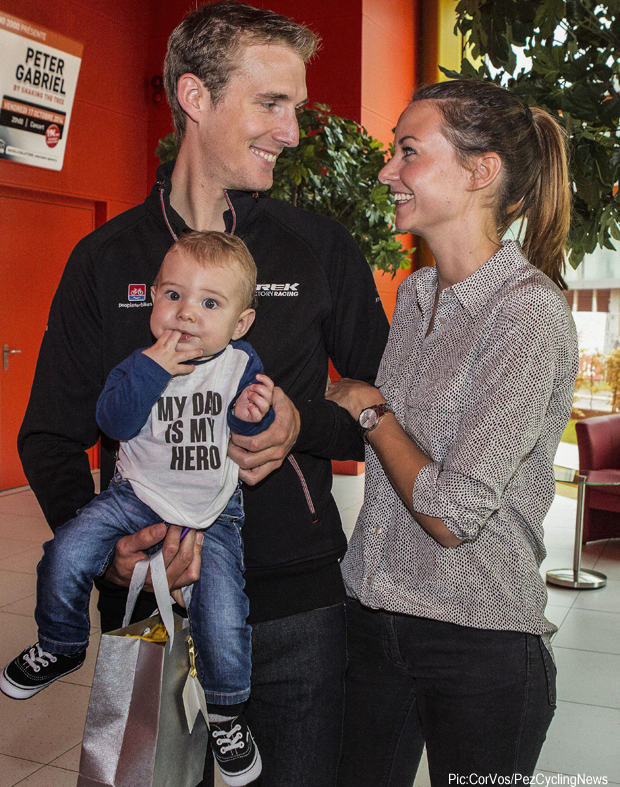 Andy will have more time for the family

For a big sports star the worst way to close the door on a career must be because of injury at an early age. Andy Schleck was good for cycling, he raced hard, he could climb fast and he could laugh at his own misfortunes. He was a character and in this time of power meters and race radios there are not many of them left. Good luck for your future life Andy from all at PEZ.

SIDI: “From Head to Toe”