This year’s Air Force Association Cycling Classic Crystal Cup was even hotter than the previous day’s Clarendon Cup. Somehow the riders and I managed to stay hydrated and beat the heat. Here’s my recollection of the day’s events in pictures as I made my way around the course. 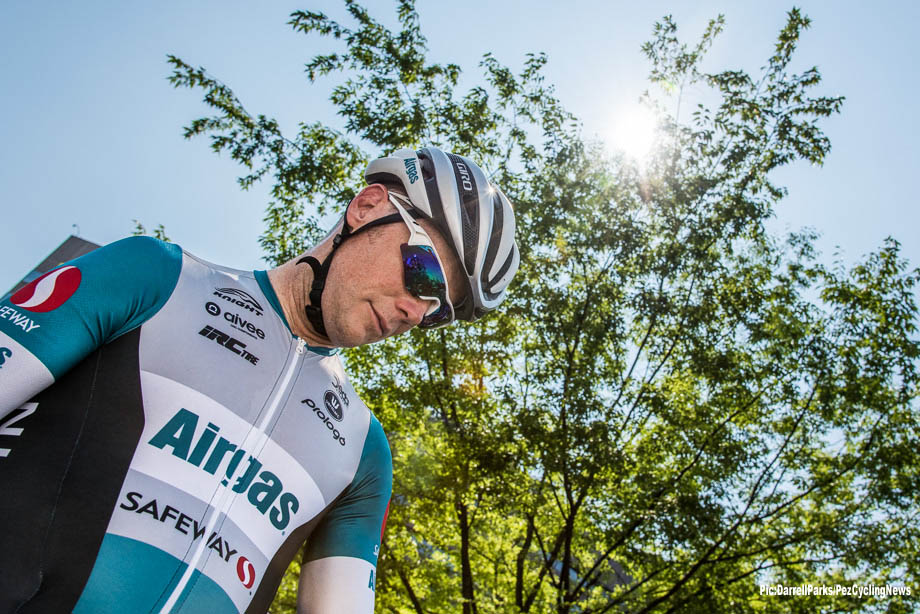 The race format is switched for the Crystal Cup so the men start before the women. This would usually result in some cooler morning temperatures for the men, but it was already into the 90’s by the time the men were called to the start just before noon. Here Chris Horner tries to find some shade from the blistering hot sun while waiting for his call up. 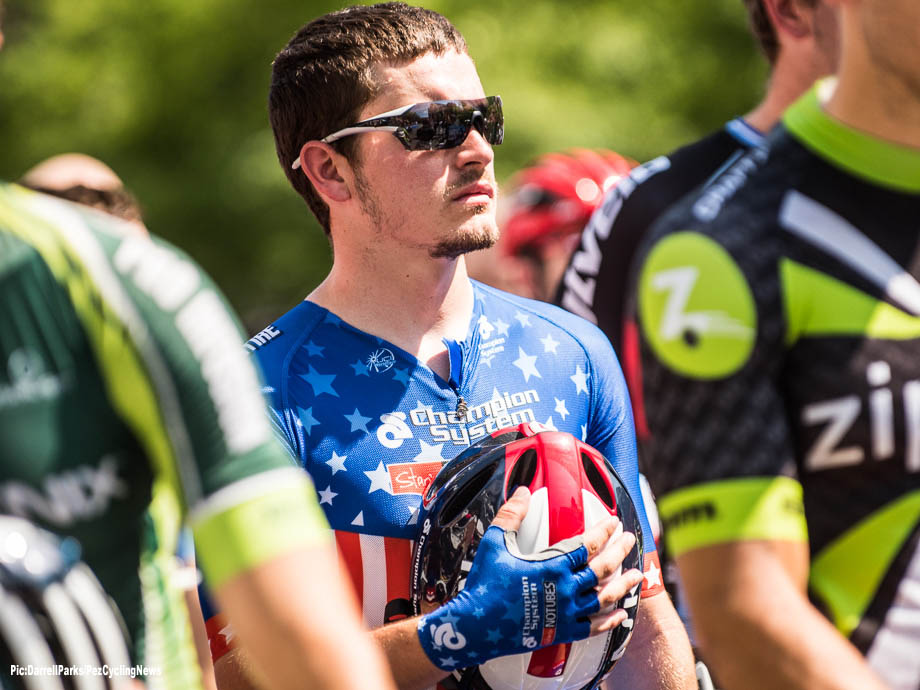 Proudly displaying his stars and stripes kit, Champion Systems rider James LaBerge holds his helmet over his heart during the playing of the National Anthem. After all, Sunday’s race was being held on Flag Day. 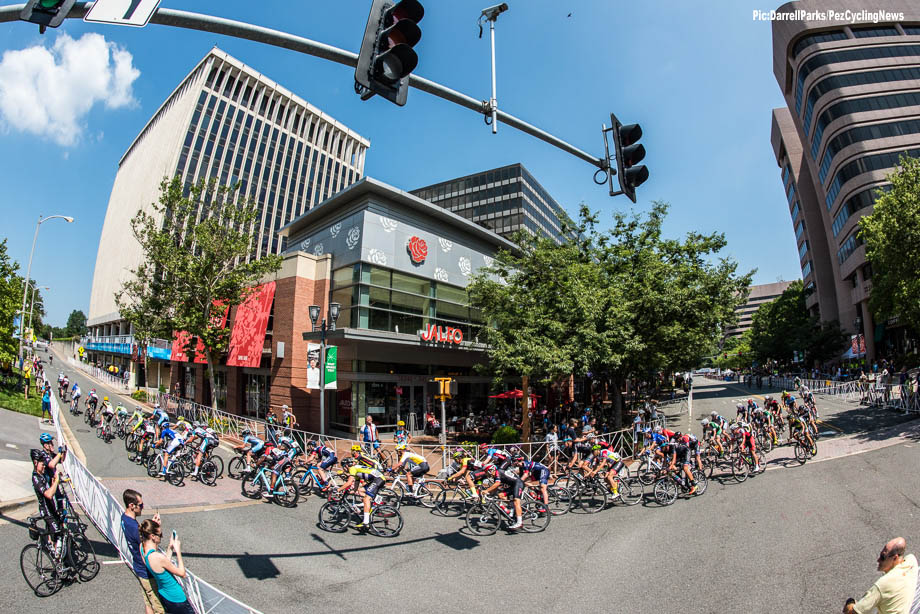 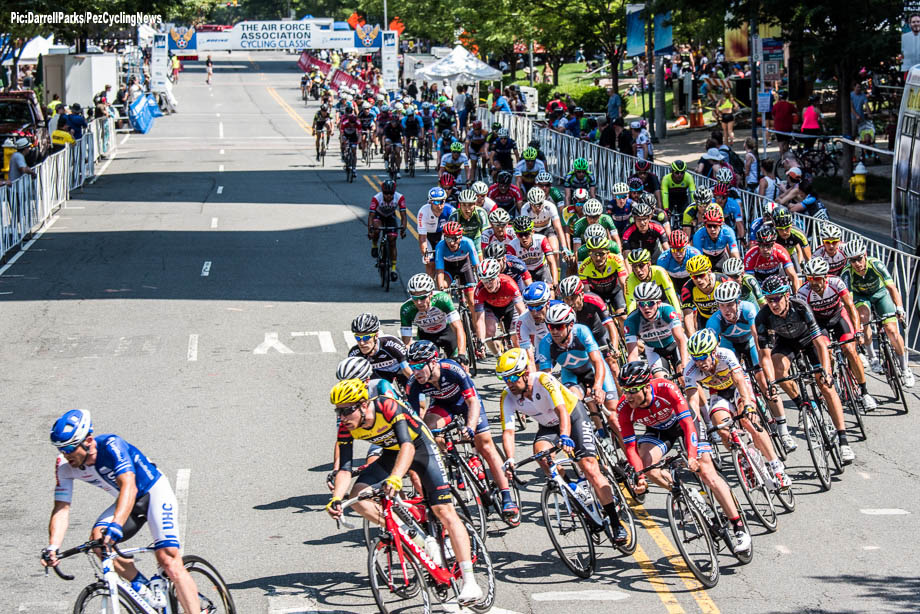 Turn one of the course gives just a hint of the Crystal City skyline. The buildings here tend to have a modern design in contrast to the more traditional lines of the buildings of Clarendon. The Peloton takes this one with a bit of speed at the end of the long straight run down Crystal Drive. 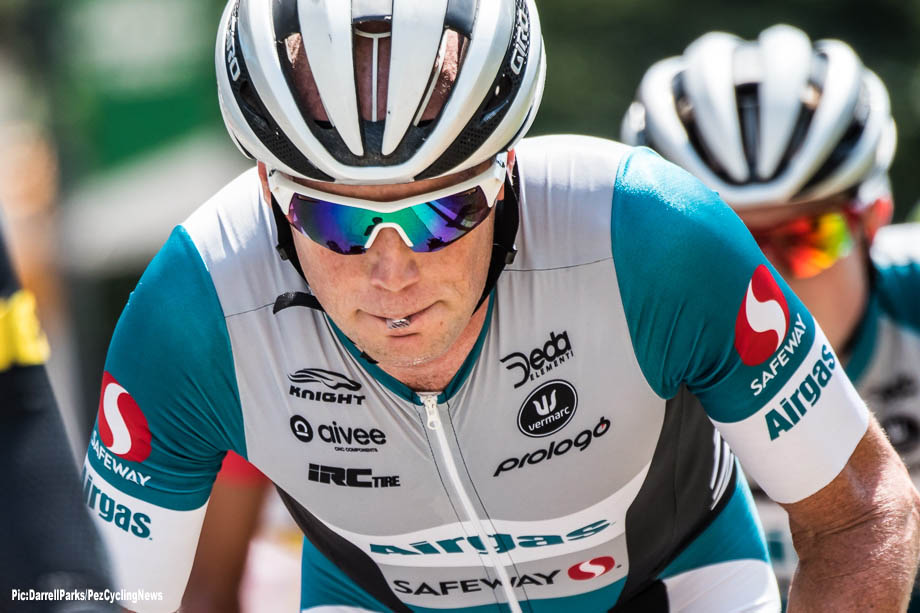 I’m not sure what Chris Horner has in his mouth in this shot. I’m guessing with the heat of the day it’s some kind of salt or electrolyte tablet. With the high temperature and humidity the heat index was well over 100 degrees. 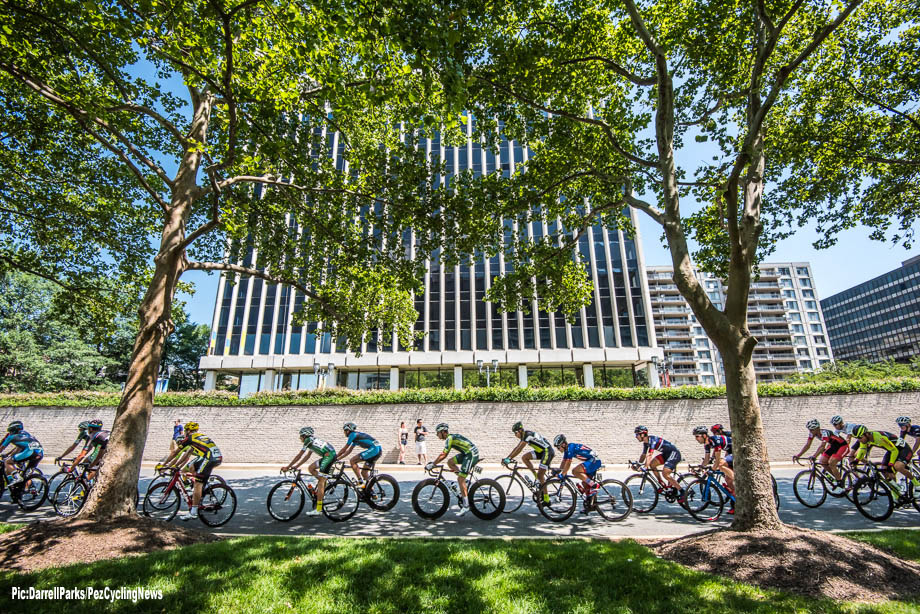 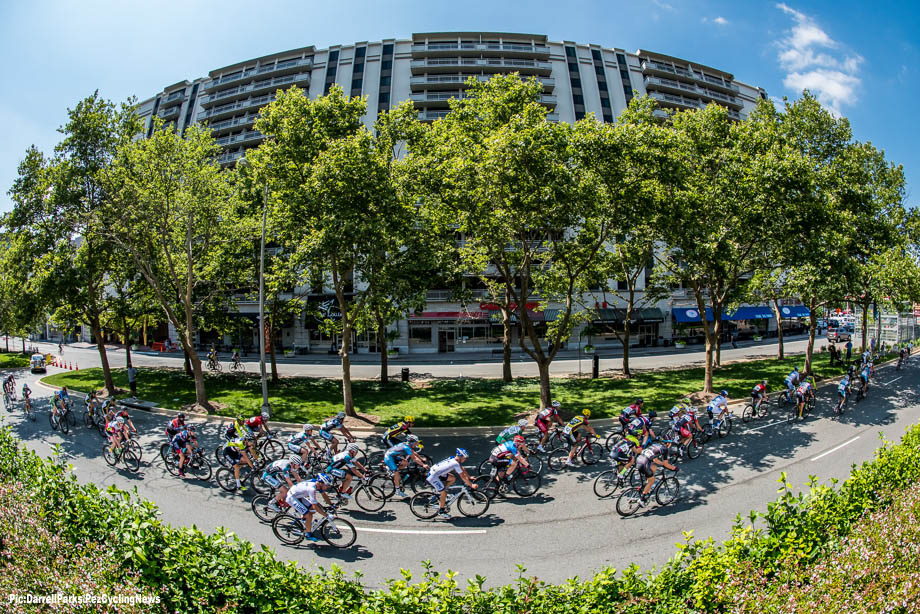 The slight uphill stretch between turn one and turn two runs alongside a small park. Fortunately for the riders the park is lined with huge trees. The shade provided by the trees gives the riders a bit of respite from the intense heat of the sun. There were very few clouds in the sky to provide any relief on race day. 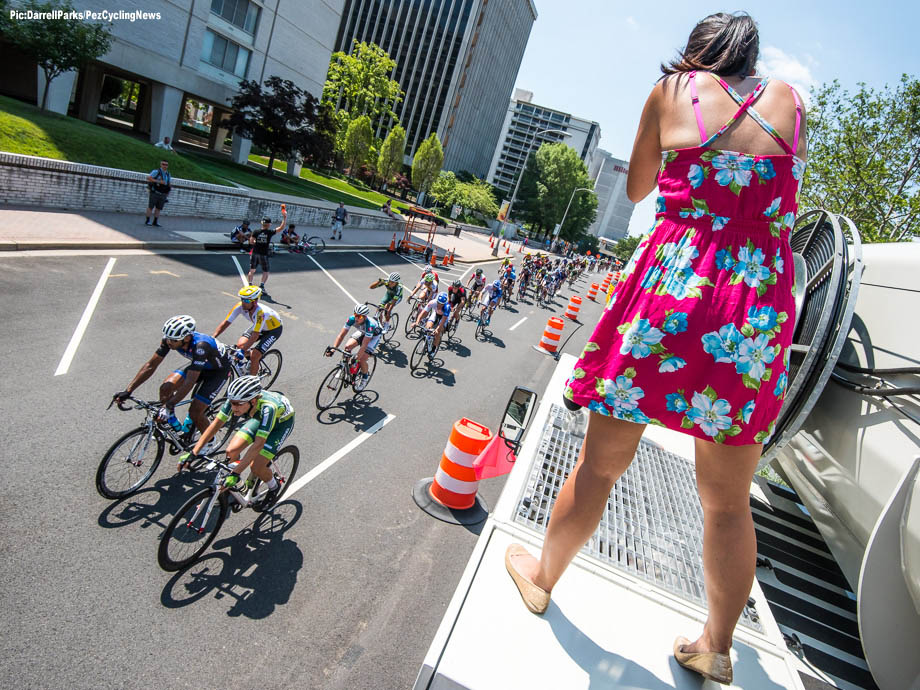 On the back side of the course I found Danni taking a break from her feed zone duties for Team Guttenplan Cycling. She had climbed up on the giant crane parked alongside the road to get to this great vantage point for shooting the race. She also provided me with a subject to add just a bit more interest in my composition as well. 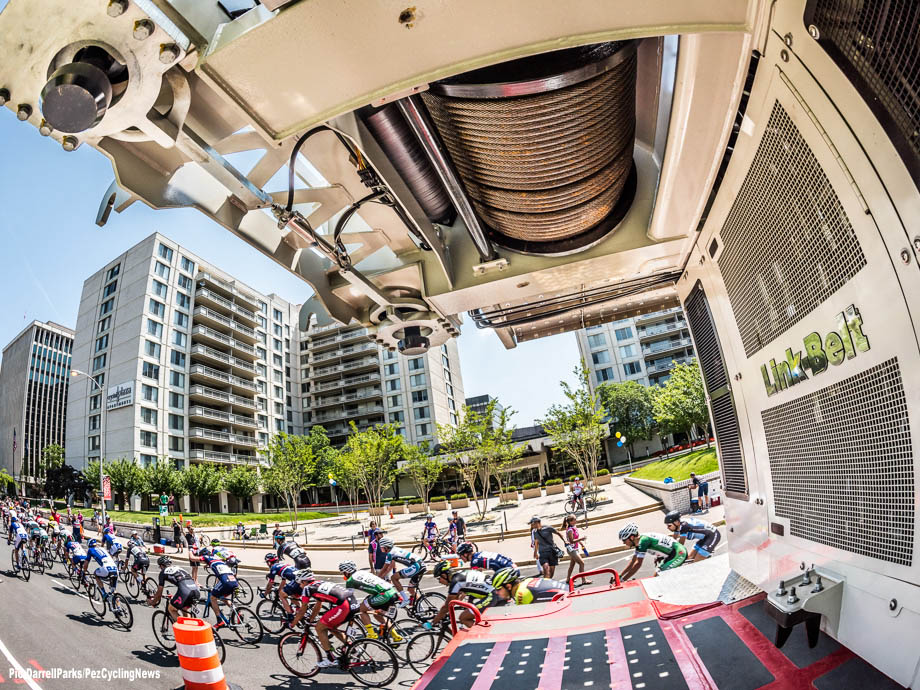 The Crystal City feed zone was located just past the crane. I used that to my advantage as I wanted to work the cool mechanicals of the crane into the race. This shot also provided a bit of shade for me as I felt I was starting to melt from the heat out on the asphalt. 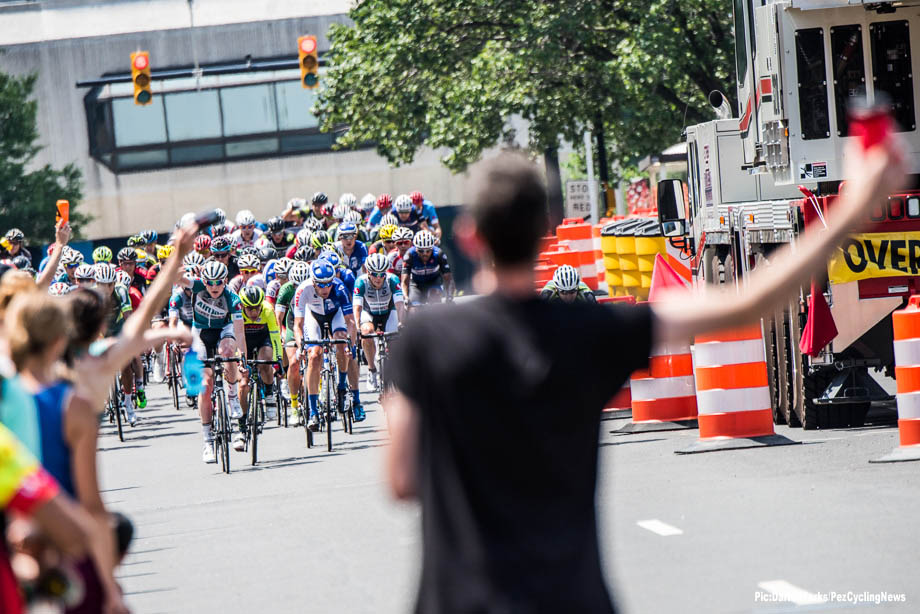 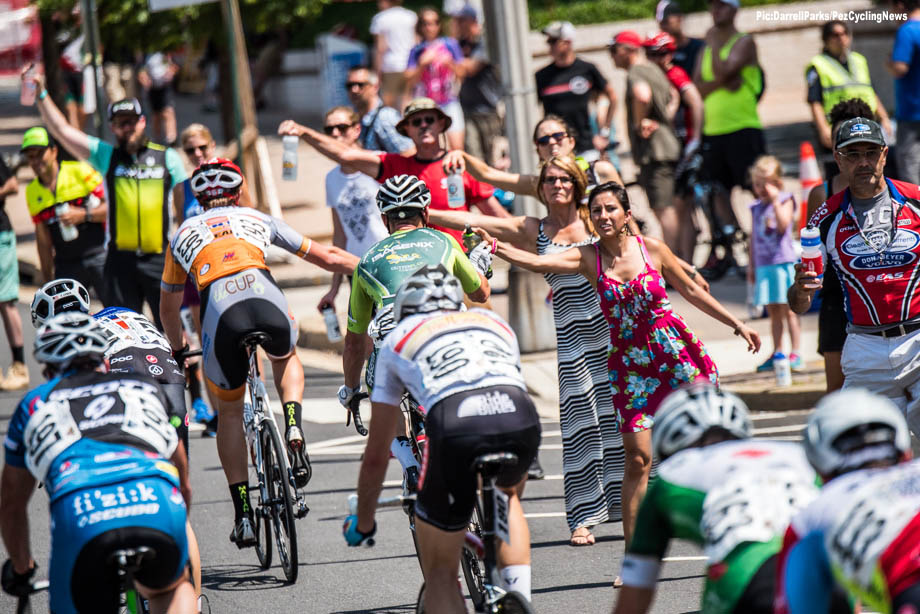 The feed zone here seemed a bit safer than Clarendon as the road was a little wider and had a slight uphill to slow the pack down just a bit. Still, seeing the large pack of riders bearing down on the soigneurs is very intimidating. And yes, that’s Danni in there with her floral print dress, back to her Team Guttanplan duties. 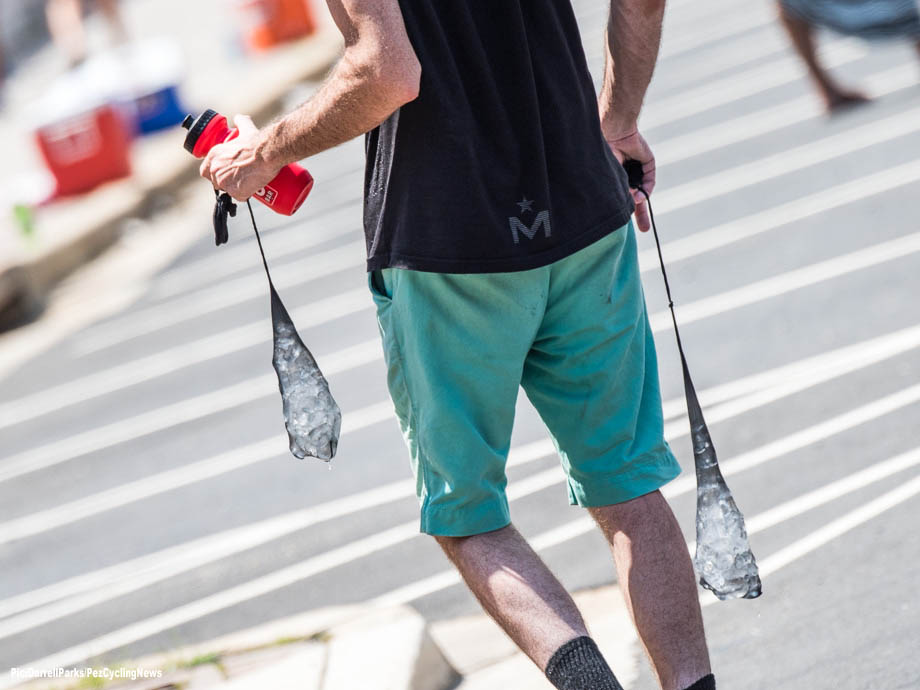 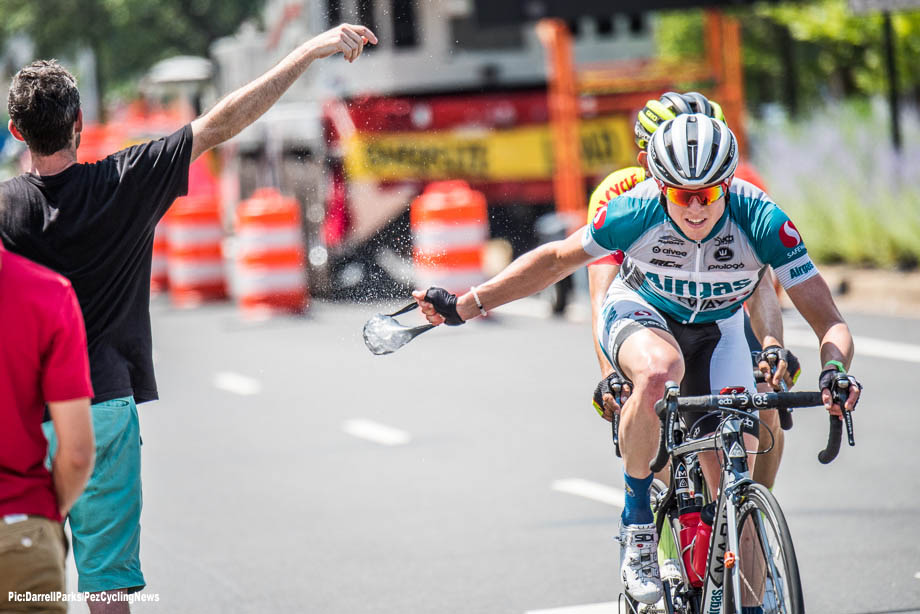 Ice bags made there way to the top of the riders wish lists again. Team Airgas Safeway made the handoff look easy, even at over 25 miles per hour. 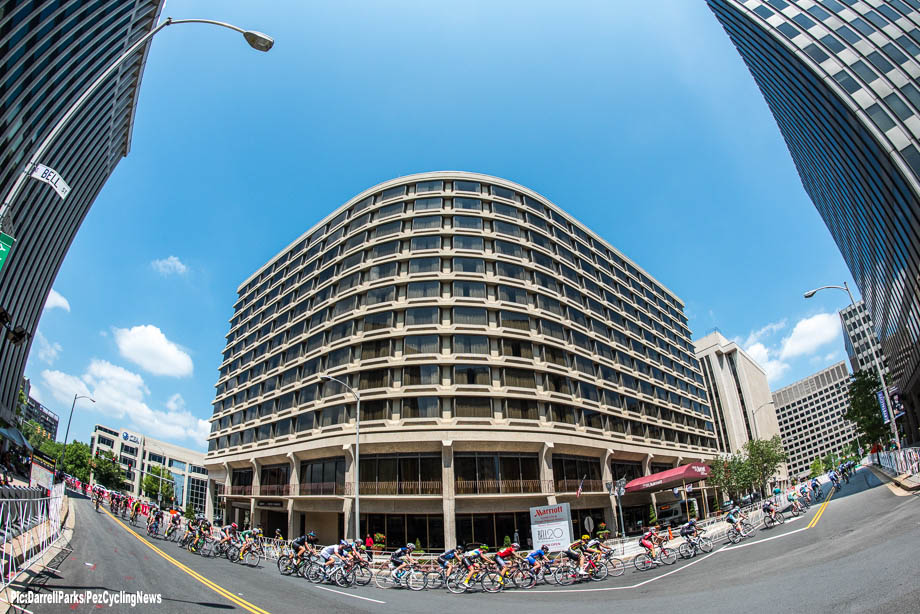 Racing through the “Urban Canyons”. Here the course takes a jog around a sweeping left hand turn in front of the Marriott Hotel. The curve of the turn and the Peloton is magnified by the use of my fish eye lens. The skies were still void of clouds at this time and provided a big contrast to the lines of the huge building. 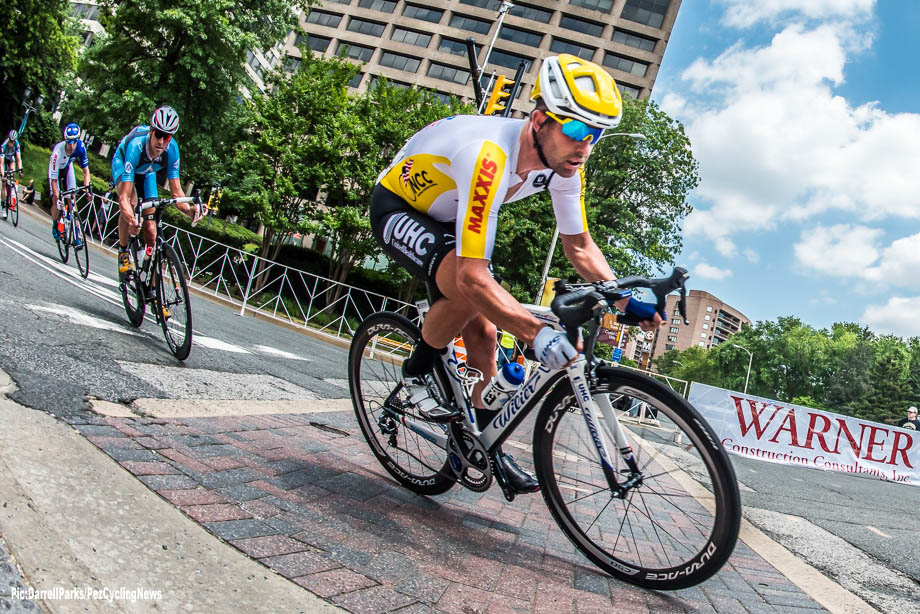 The final turn of the course comes at the bottom of a hill and is taken at great speed. The road is pretty rough here and was the site of a huge crash on the final lap of the race. Here, we see UHC rider Hilton Clarke screaming through the turn just prior to lapping the field in the break. 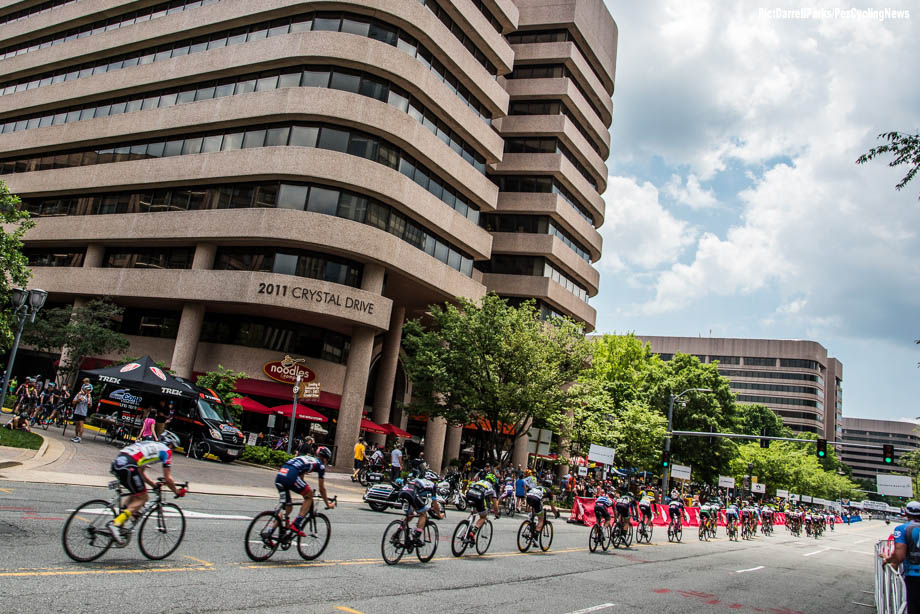 Once through the final turn the race makes its way up a false flat to the finish on Crystal Drive. The street is lined with more modern stone and glass structures along the way. The afternoon thunder clouds are starting to form in the distance with just a few laps to go. 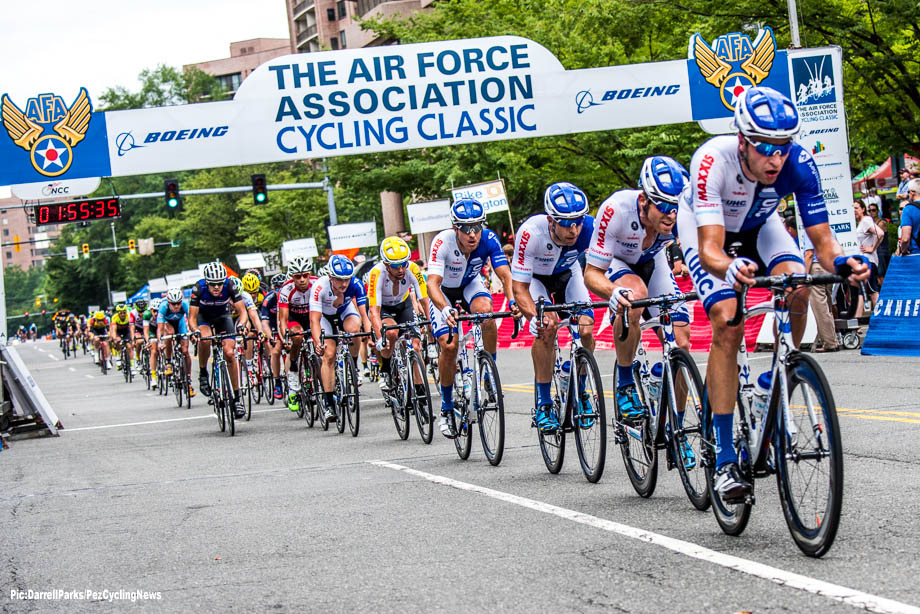 As expected the UHC train makes its presence felt by putting everyone into the pain cave just trying to hang on to the caboose. Clarendon cup winner Hilton Clarke is safely tucked in feeling confident having lapped the field while in the break containing no real sprinting threats. 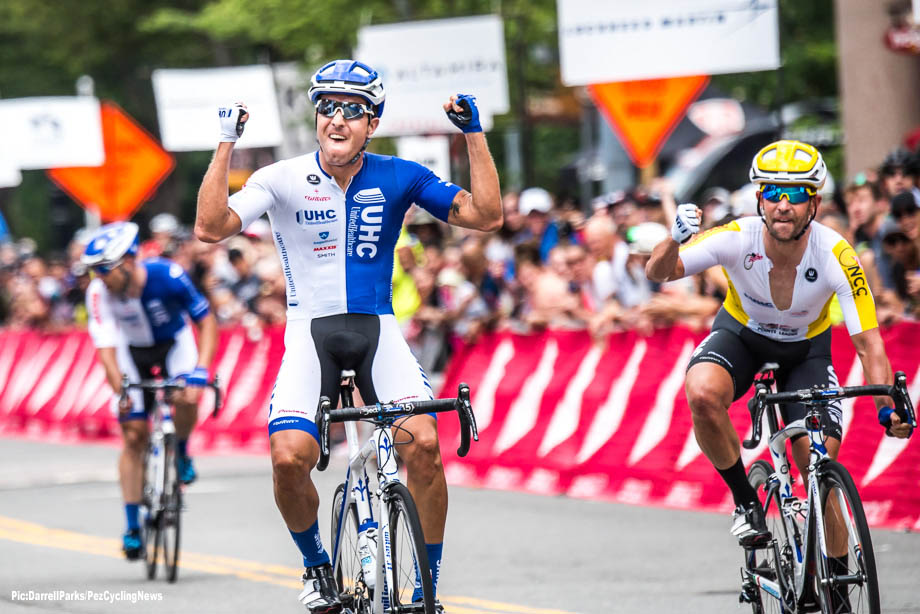 With Clarke taking the win, UHC rider Carlos Alzate celebrates as they all know its truly a team effort to win a race like this. 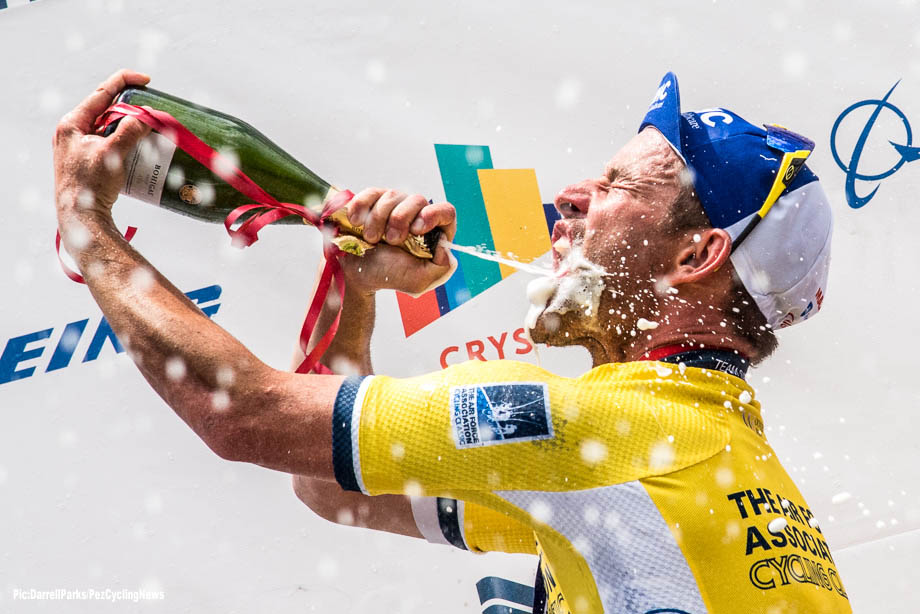 Hilton Clarke decides to indulge in a bit of the bubbly after winning both days of racing and taking the Omnium jersey for his efforts. 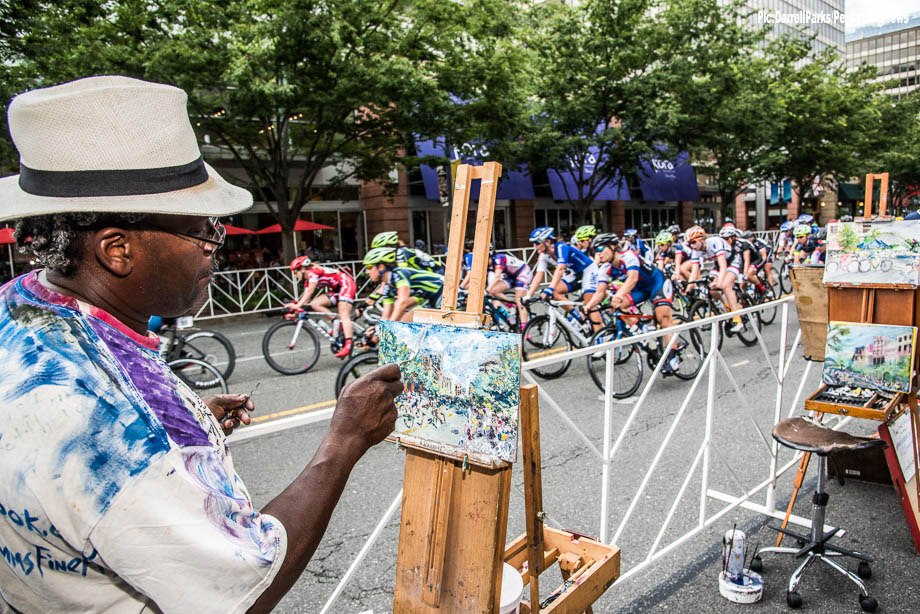 Wilmington Delaware artist Keith Obrien Simms was on hand to paint the race on both days. Here he’s working his magic during the early laps of the women’s race. 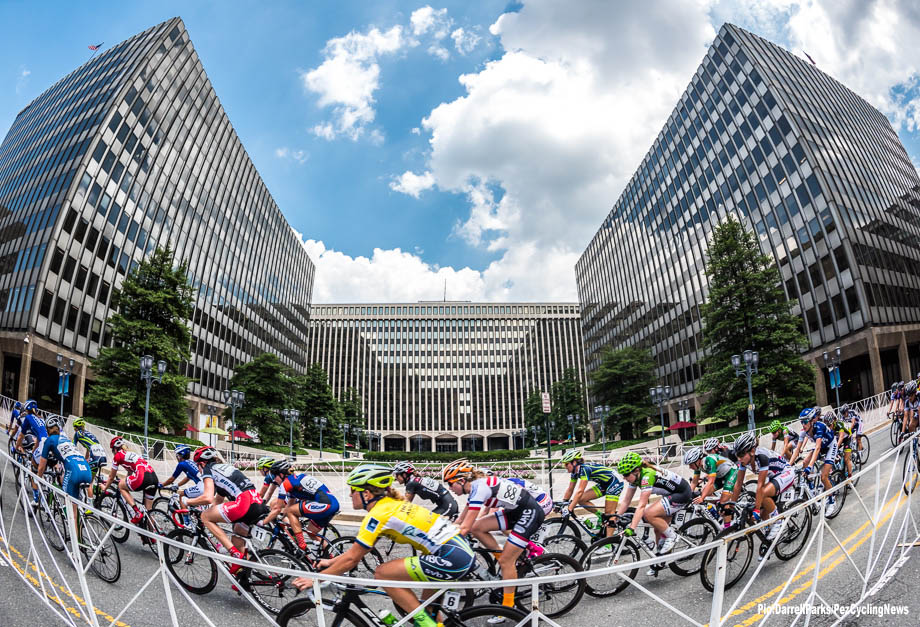 Midway through the women’s race the skies were starting to get interesting with the formation of a few more rain clouds. I noticed that these clouds were caught in the reflection of the hundreds of windows in this cluster of giant buildings. It made for a very dramatic image as the women raced by in the foreground. 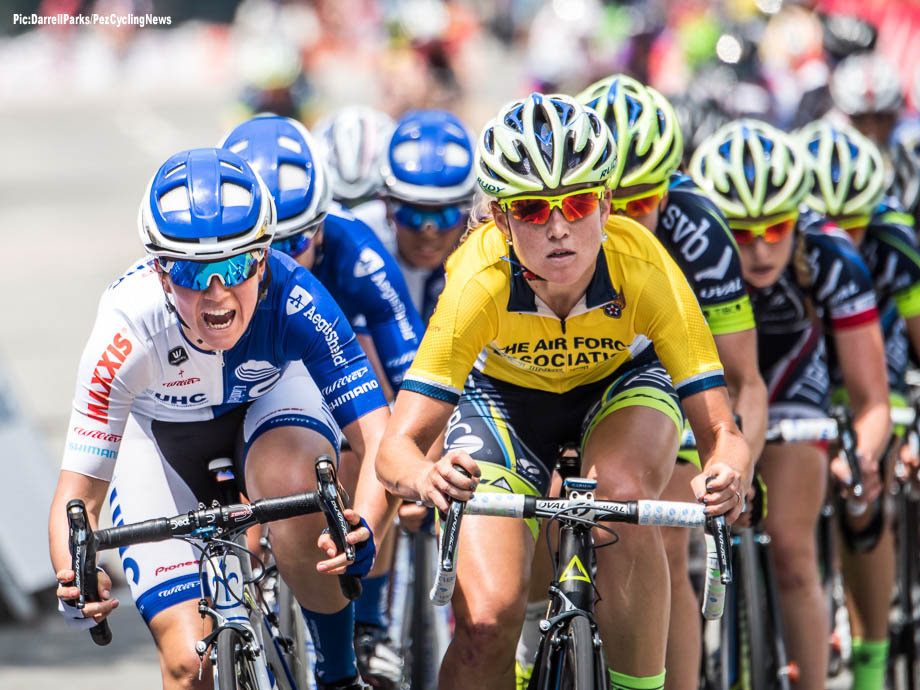 The women’s race really heated up in the final laps as team Tibco and team UHC started to fight for position at the front of the race. 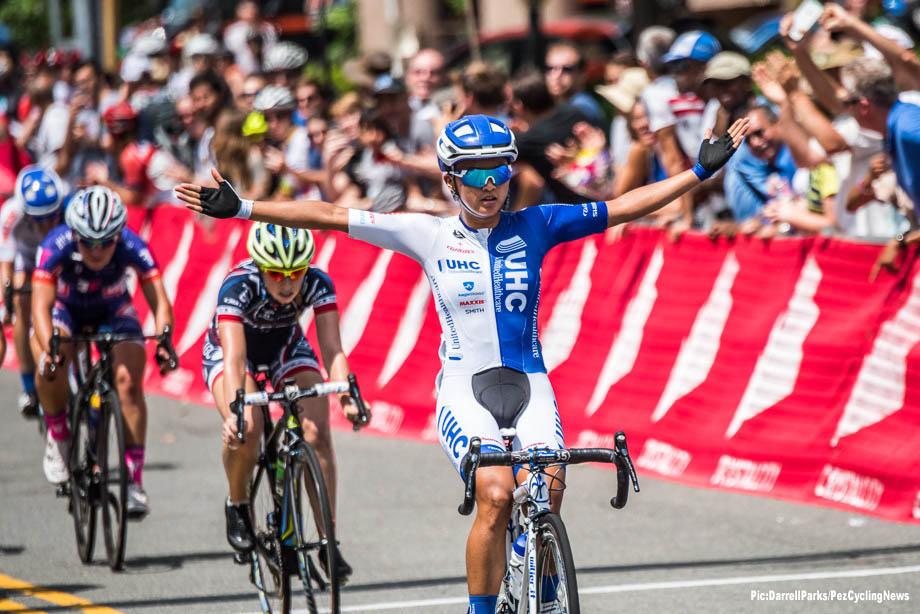 In the end it was a double win for United Health Care in Crystal City with Coryn Rivera taking it with plenty of room to spare.