Photographer Darrell Parks is becoming part of the furniture at the Philadelphia International Cycling Classic and this year was no different. This time around the woman’s race was the main event and is part of the UCI World Cup series, but there was no change to the exciting racing and Darrell’s great photographs. As every year, Darrell is at the right place at the right time to bring you his special photog’s report.

I returned to Philly once again to capture another chapter of one of the longest running USA bike races. This year was a bit different as the women’s race now held World Cup status and was moved to the main event in the afternoon. This meant the men’s race would start bright and early at 8AM. Here’s my recollection of the day’s events in pictures. 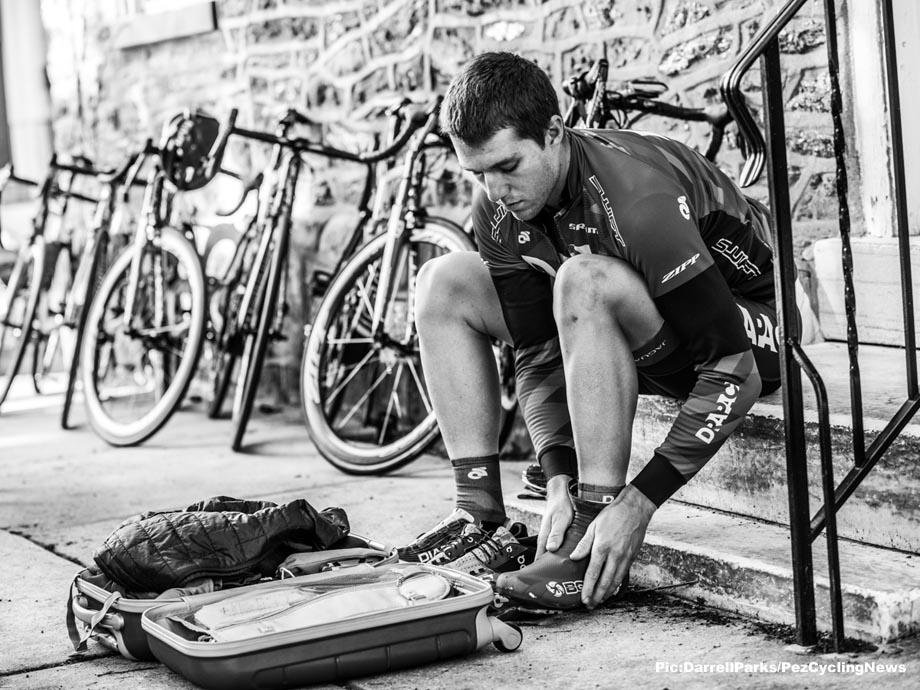 The day starts with the teams scrambling for a place to park the vans, busses, and team cars along the narrow streets of Manayunk. Riders pile out of vehicles and begin to prepare for the race wherever they can find a place to do so. This is typically on the sidewalk or a set of stairs on someone’s doorstep. Here a team DraPac rider works out of his suitcase and dons his shoe covers in preparation for the race. 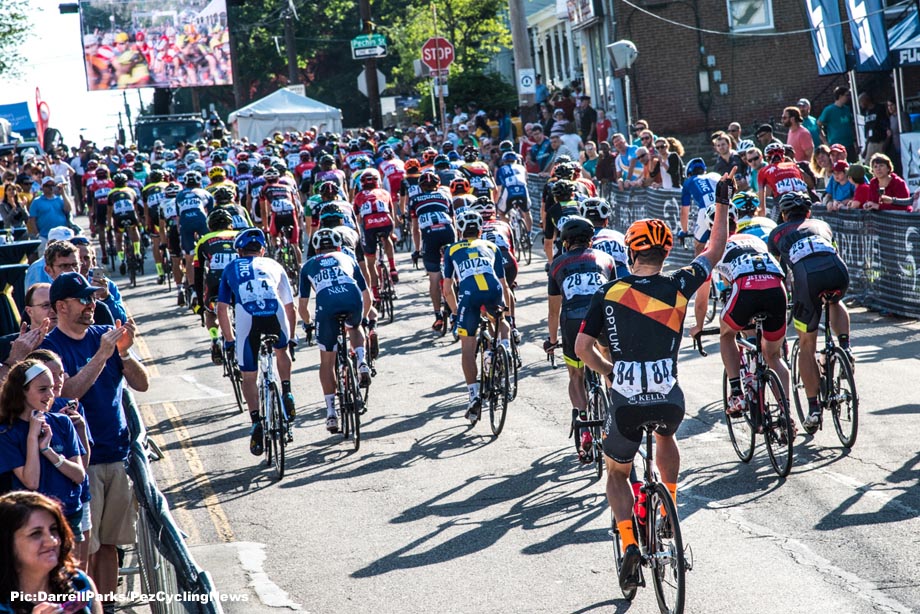 Team Optum rider Brad Huff “Dances” to music blaring out of the PA as the riders take off from the start at 8 O’clock in the morning. 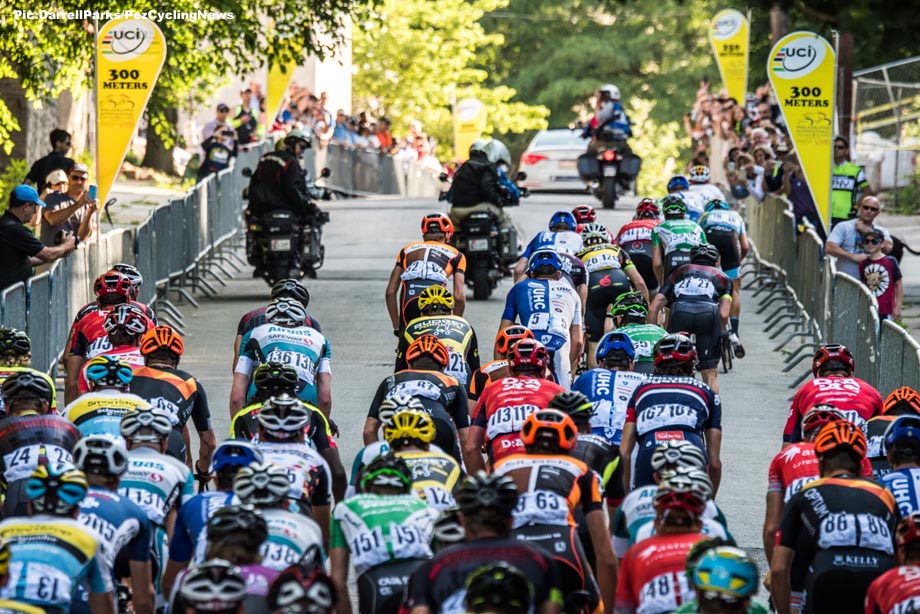 I was pleasantly surprised by the number of fans that came out for the men’s race so early in the morning. Of course most of them were indulging in Mimosas or Bloody Mary’s! Here the men are scaling the Wall for the first of 9 times. They typically run 10 laps but gave one up this year to the women’s race. 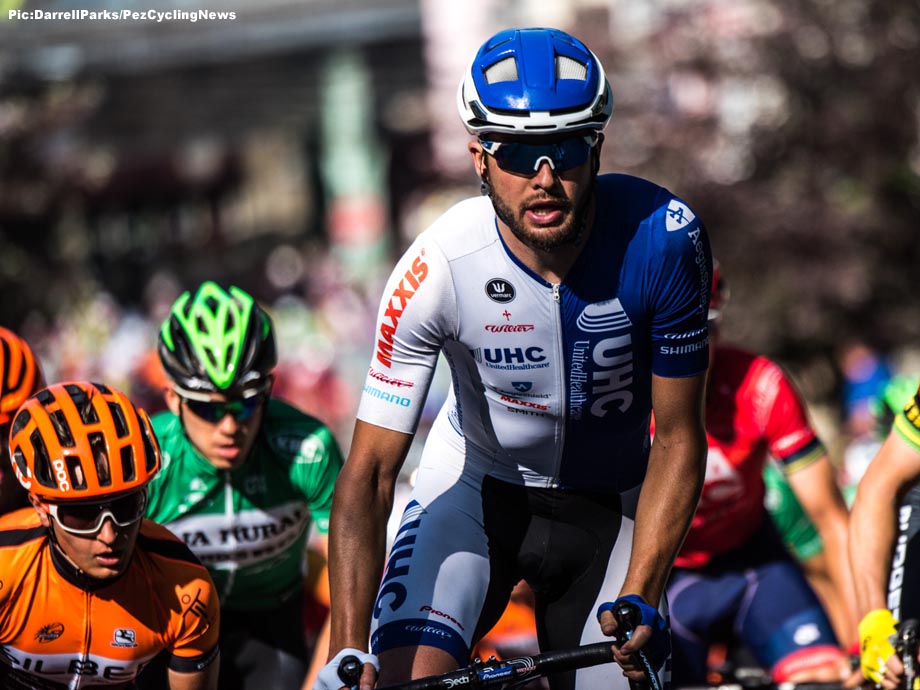 UHC rider Danny Summerhill Climbs the wall in the early morning glow of the sun. The temperatures were still quite comfortable giving some riders a reason to forgive the extra early start time. 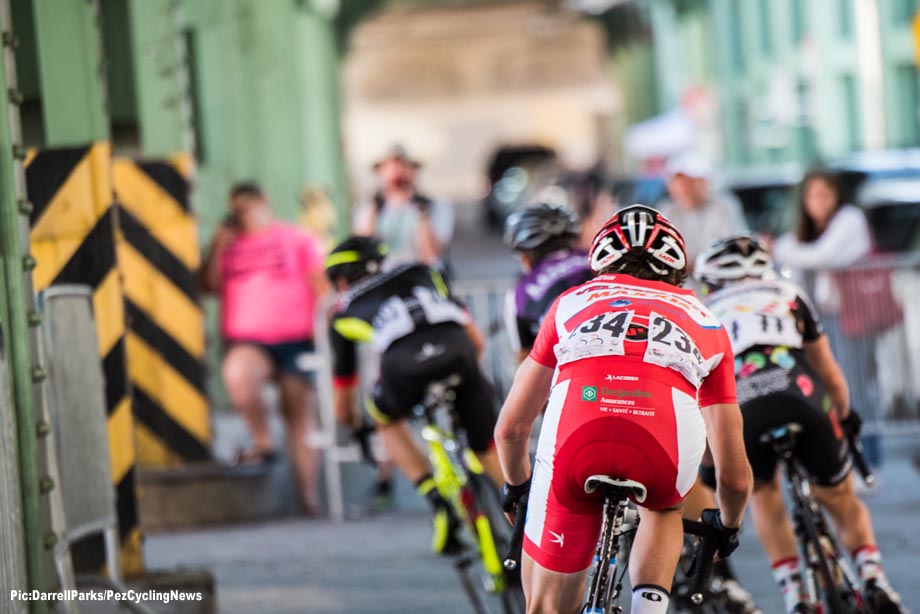 Riders hit the cobbled section under the elevated train tracks just before making the left turn that begins the painful ascent of the wall. 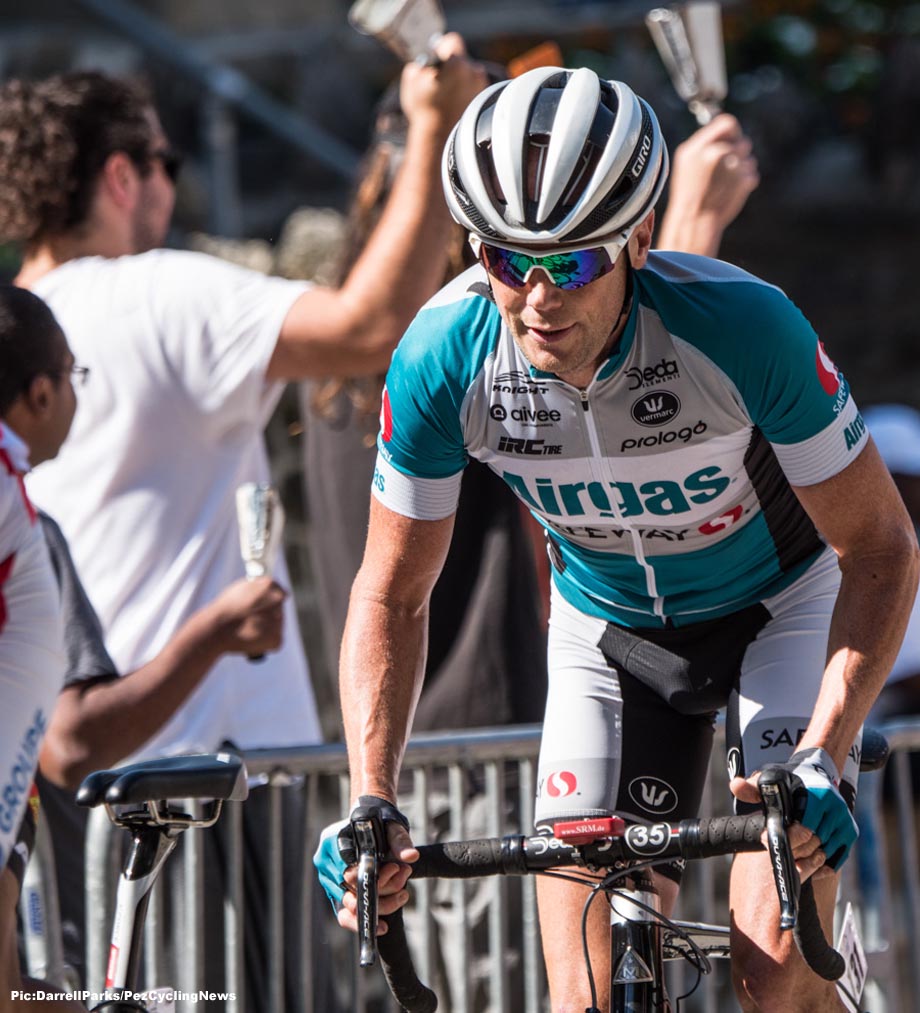 Team Airgas rider Chris Horner climbs the wall assisted by the sounds of silver cow bells. Horner attacked the field on the penultimate lap but failed to get away. 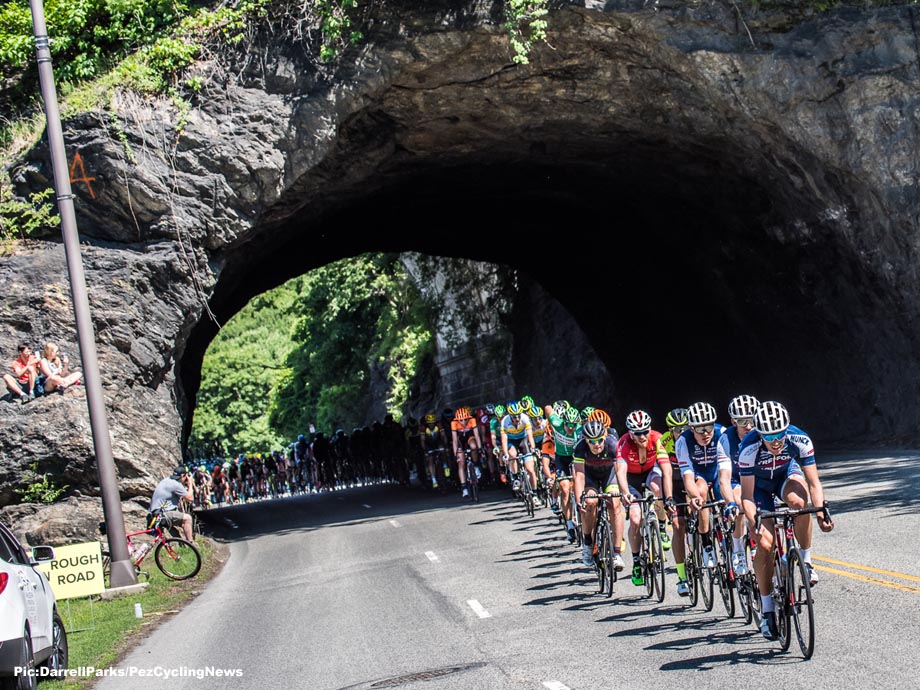 The Peloton races through a stone tunnel on the scenic Kelly Drive. 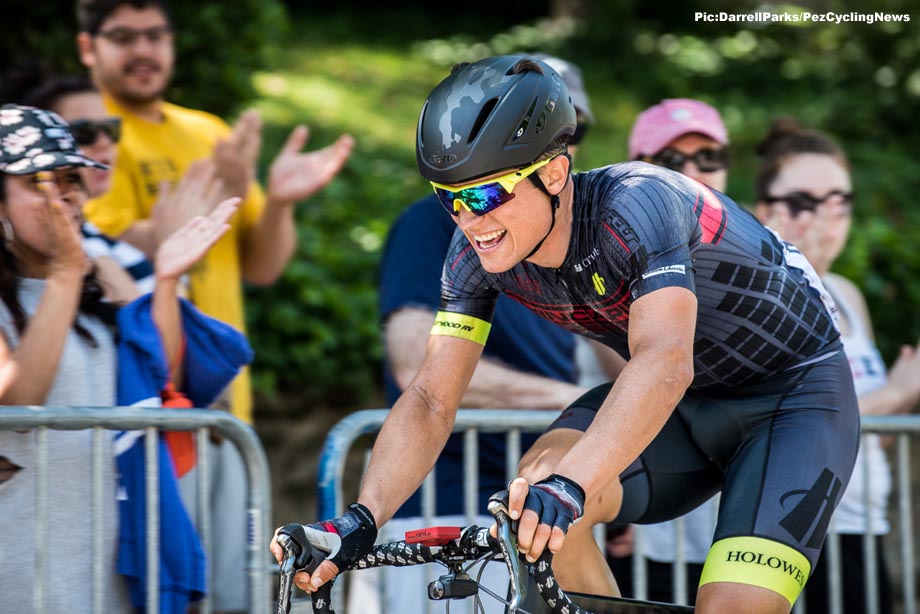 Team Hincapie rider Robin Carpenter goes on the attack. Robin grew up in Manayunk and enjoyed time in the break in front of his home town fans. 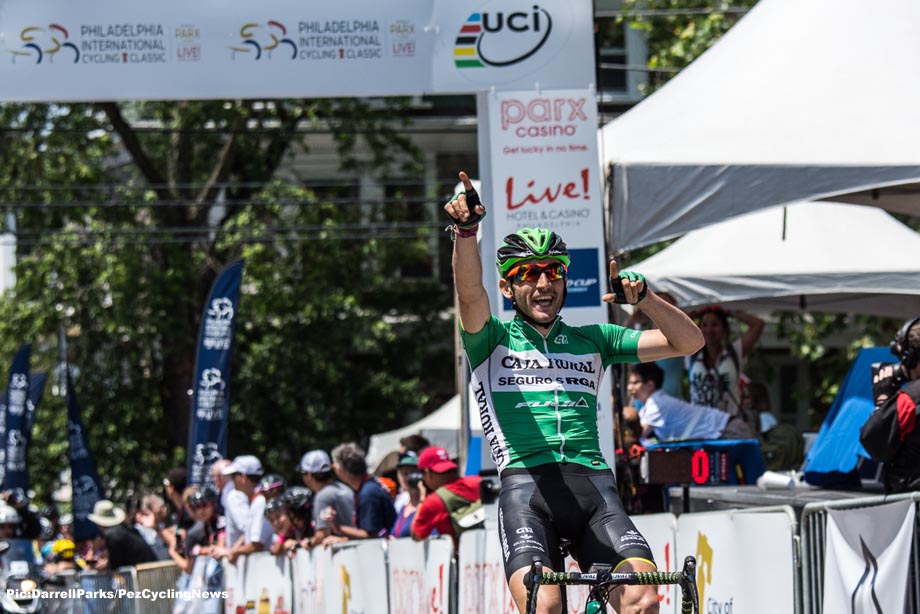 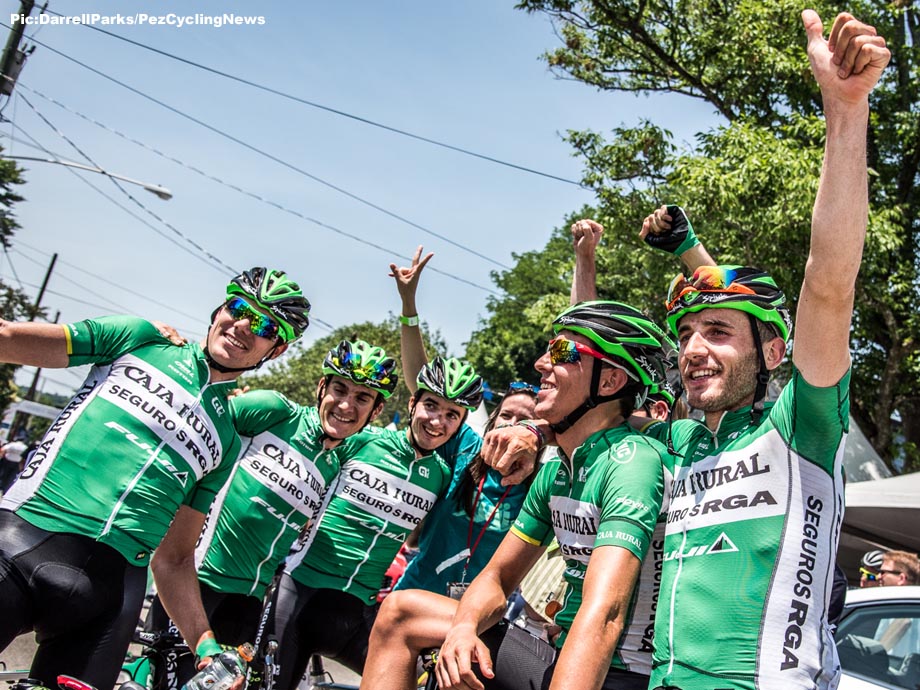 The Caja Rural Seguros team celebrates the victory in Manayunk. 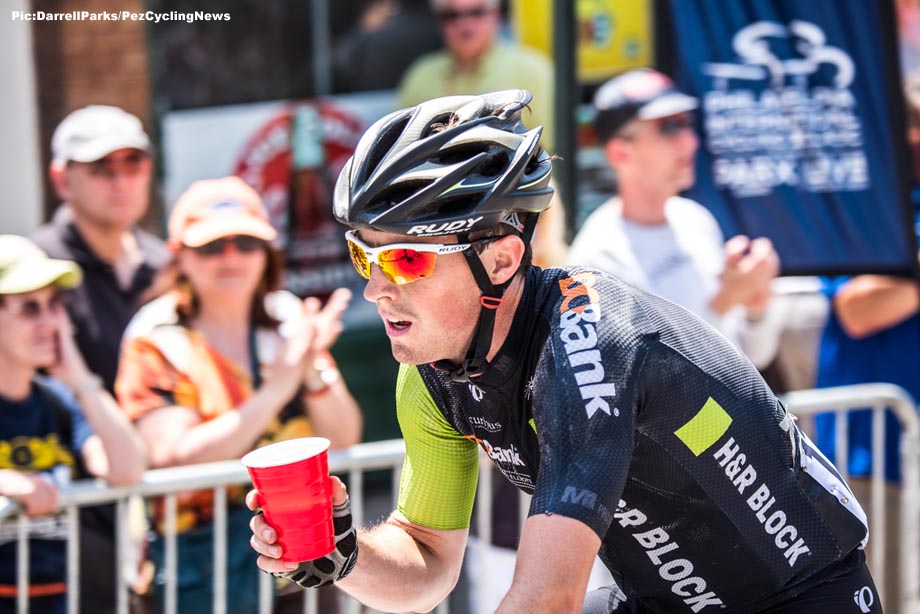 An H&R Block domestic enjoys a well-deserved beer hand up on his final trip up the wall. 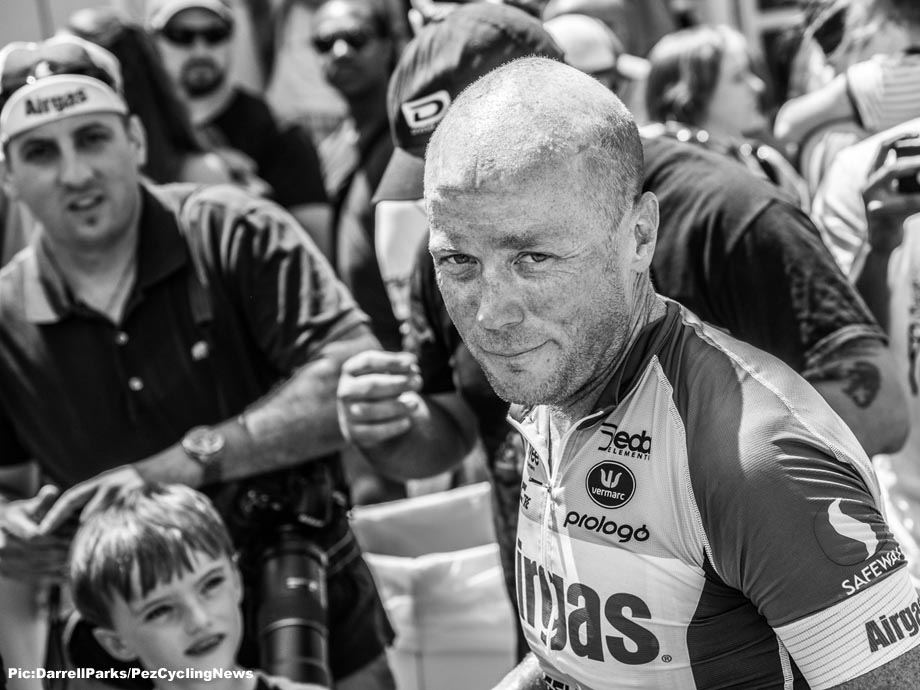 Chris Horner signs autographs for fans at the finish. 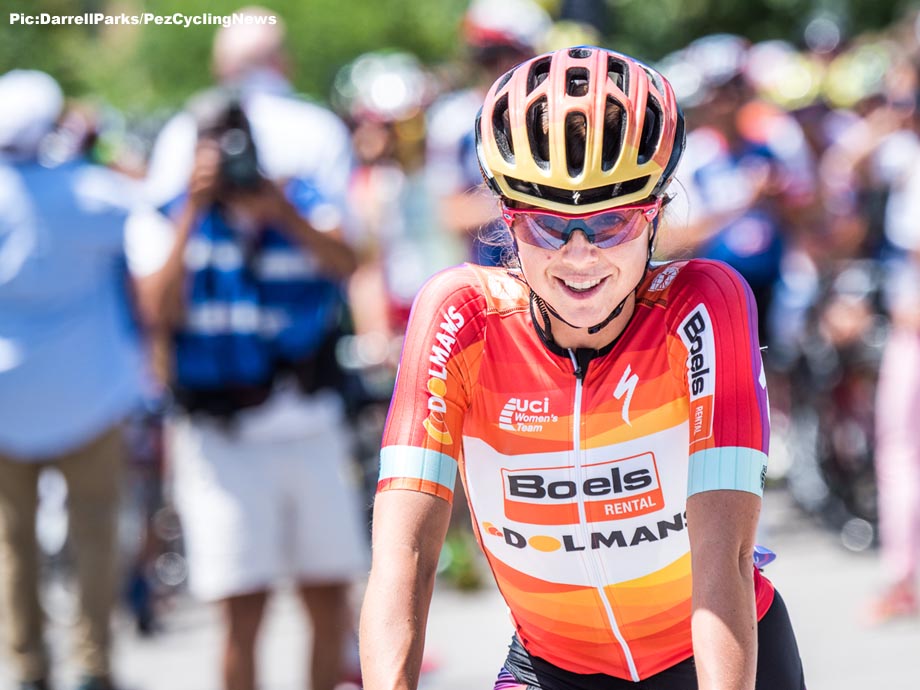 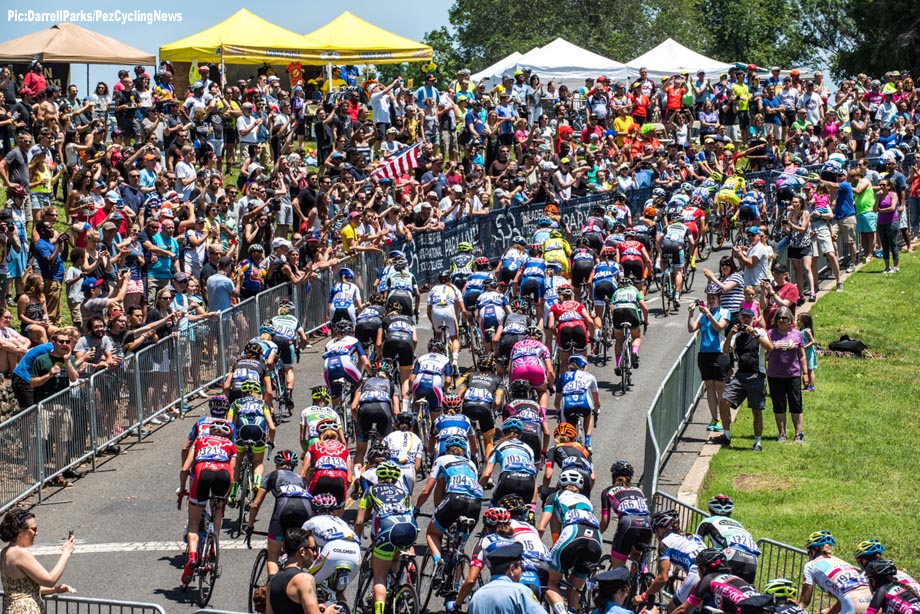 The crowds were out in force on the Lemon Hill Climb. This was probably the biggest fan showing I’ve seen in the past 5 years. 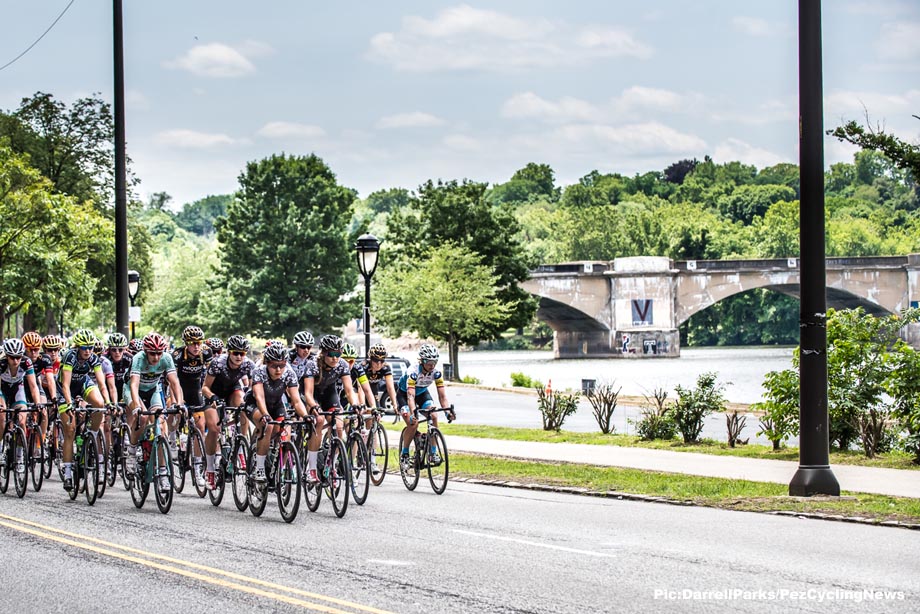 The women’s field races along the scenic Shcuylkill River on Kelly Drive. 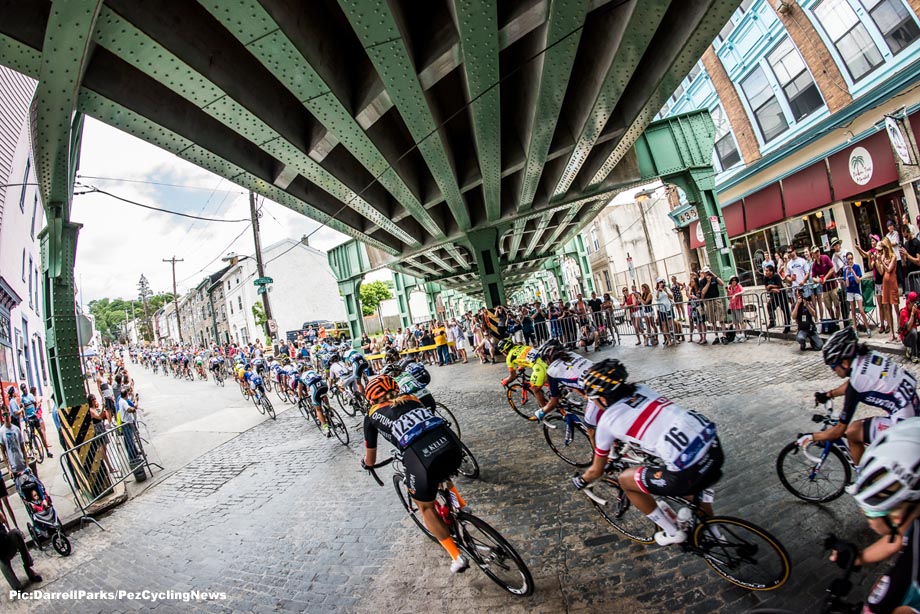 Leaving the cobbles behind as they begin the climb up the infamous Manayunk Wall! An additional lap was added to this year’s women’s race. 6 trips up the wall made the course plenty tough for a Women’s World Cup Event. 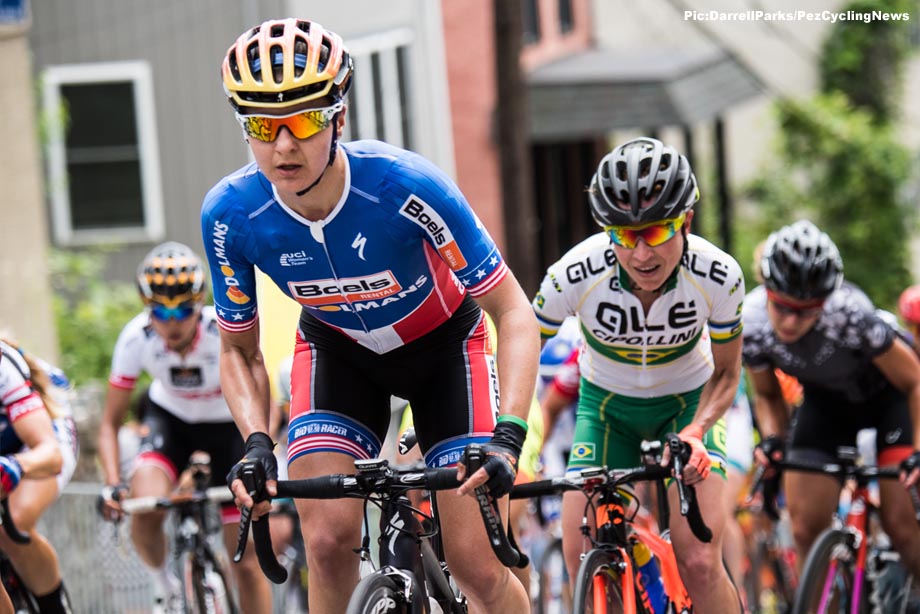 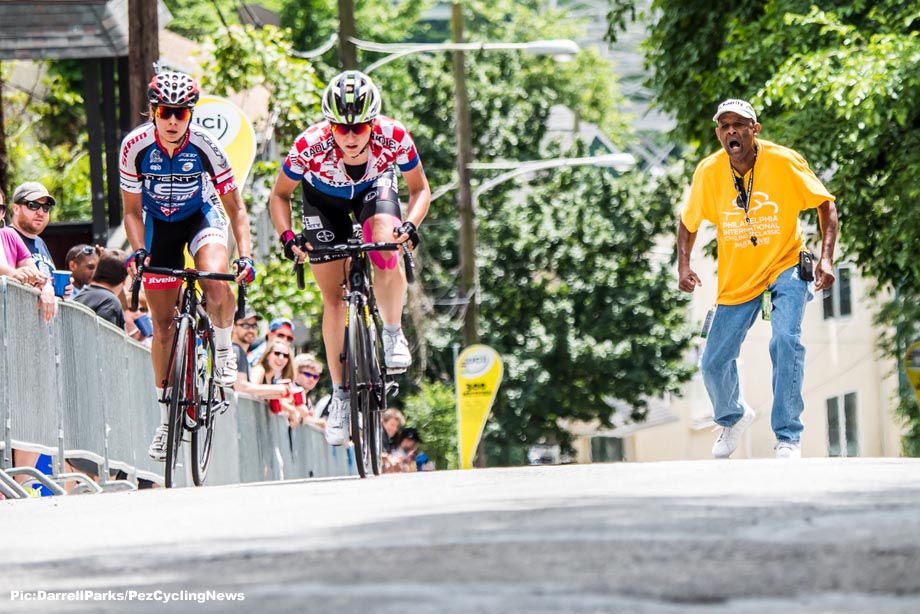 Even the volunteers get into the action. This guy has been cheering on the racers for as long as I can remember. He also likes to get the Fans involved as well. 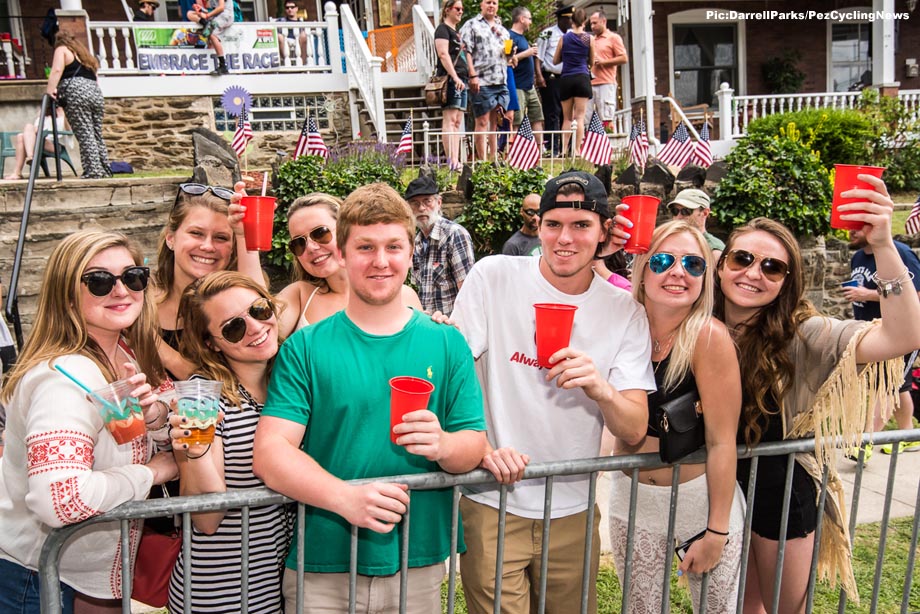 As usual, the Philly race is about the Party! But it’s not just about the party. The fans cheer whole heartily for every last rider that struggles to make it up the hill. 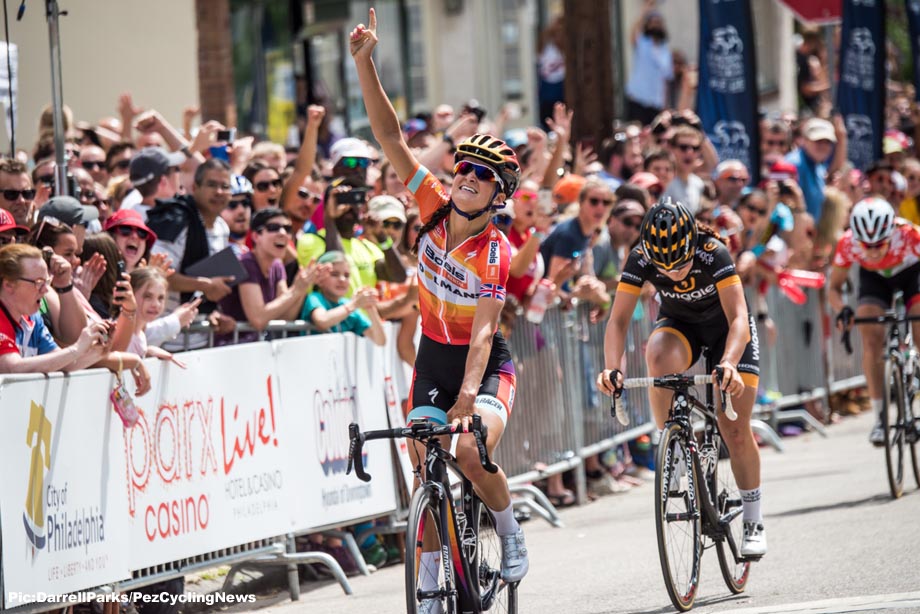 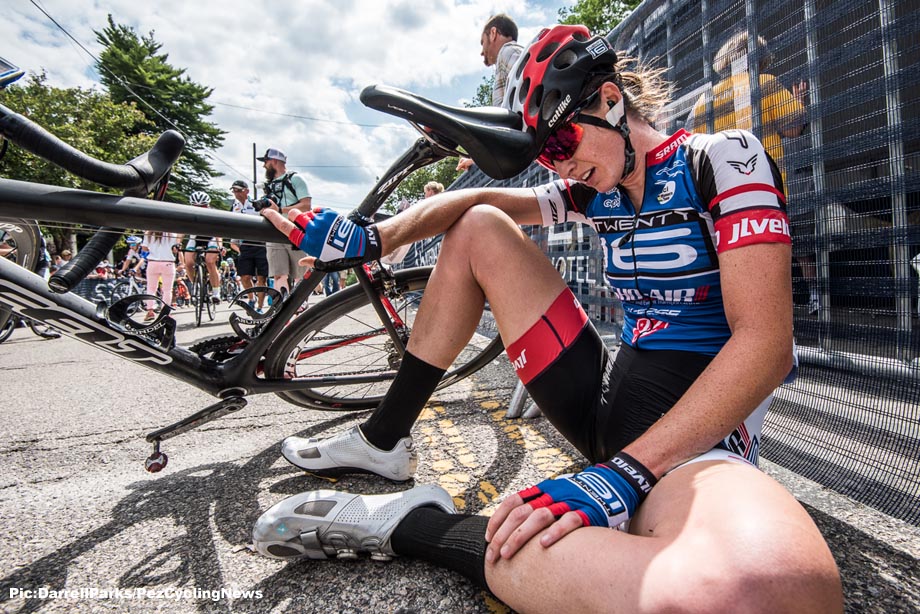 These women left nothing on the road. They sprinted up the hill to the finish, their minds pushing their bodies beyond its physical limitations. Now there was nothing left in the tank but pain as they struggled just to get off their bikes and make their way to the ground. Philly proved to be a very hard bike race, more than worthy of its World Cup Status! 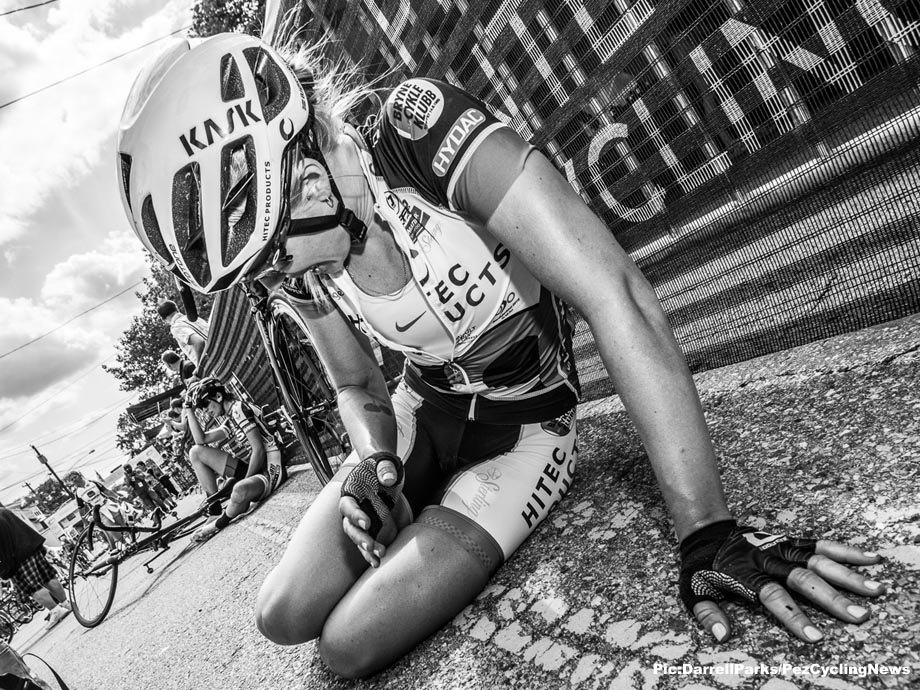