Roadside Report: Roadside for the action & back stage before and after the race for the reactions – Ed Hood was everywhere in Ponferrada today as he watched the Junior Men’s Road Race in the morning and then the big Women’s Race in the afternoon where France’s Pauline Ferrand-Prevot upset the favorites with a great sprint victory.

Lizzie Armistead (GB), Marianne Vos (The Netherlands), Emma Johansson (Sweden) and Elisa Longho Borghini (Italy) are clear coming into the finishing straight – four of the best girls in the world, one of them will be world champion, for sure. But, what the . . .??

They’re looking at each other, the peloton is closing, fast – they’re swamped and the French girl, Pauline Ferrand Prevot appears from nowhere to grab the rainbow hoops. Those sprinters – they do things like that . . . 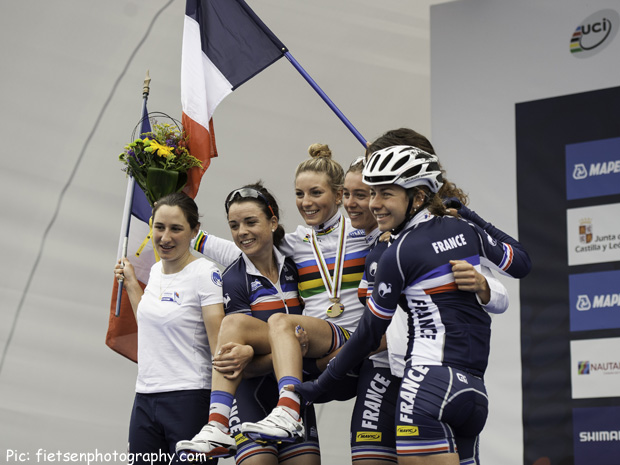 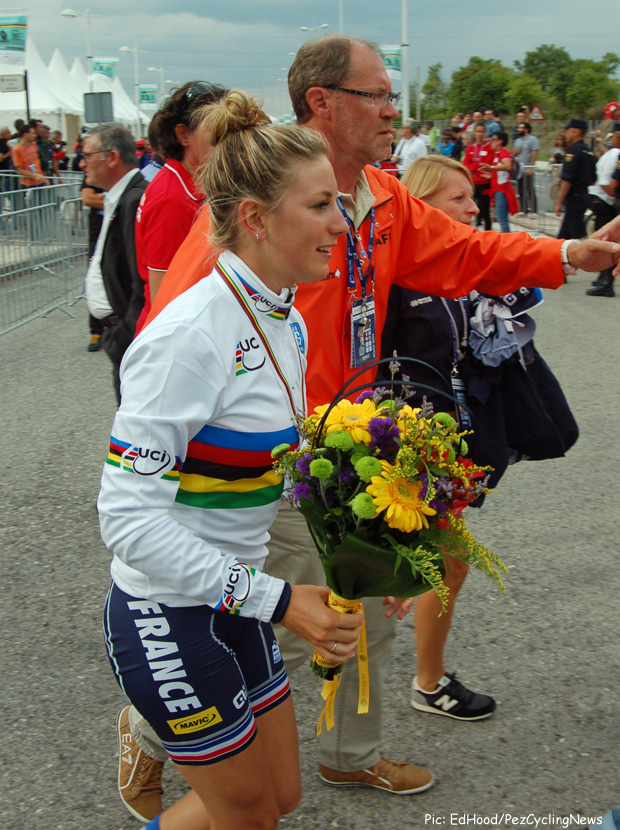 It was a long day that started way back this morning . . . .

“Juniors no good” the Canadian soigneur tells me as two of his charges compare notes on why they’re both DNF. 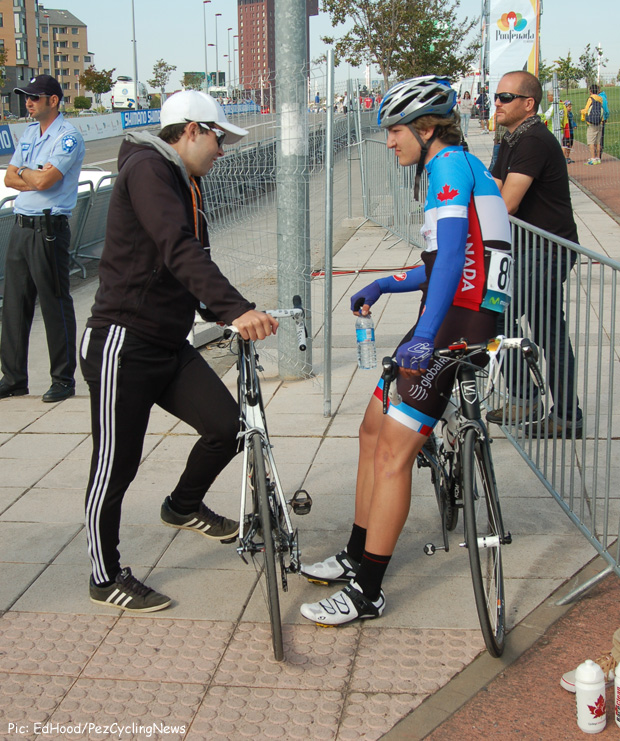 Up on the screen the Italian race leader, Conci over cooks it on the descent and goes down. It’s been a crazy race – attacks, crashes, names in notebooks and then gone before the ink is dry. The last climb and riders fire of the front trying to emulate yesterday’s Norse U23 winner – two try to bridge with the peloton not far behind. Seven now but the peloton is closing, closing . . . 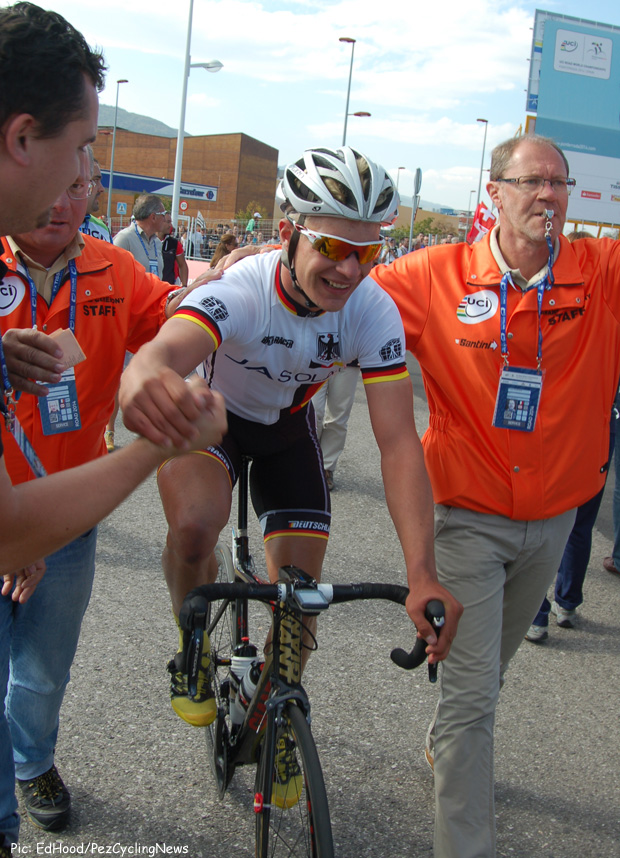 A Suisse goes clear on the flat, fast, finish then a Russian comes over – but the peloton washes them away it’s a blanket finish with Germany’s Jonas Bokeloh putting the rainbow in his back pocket from Russia’s Alexandr Kulikovskiy and The Netherlands Peter Lenderink takes bronze. 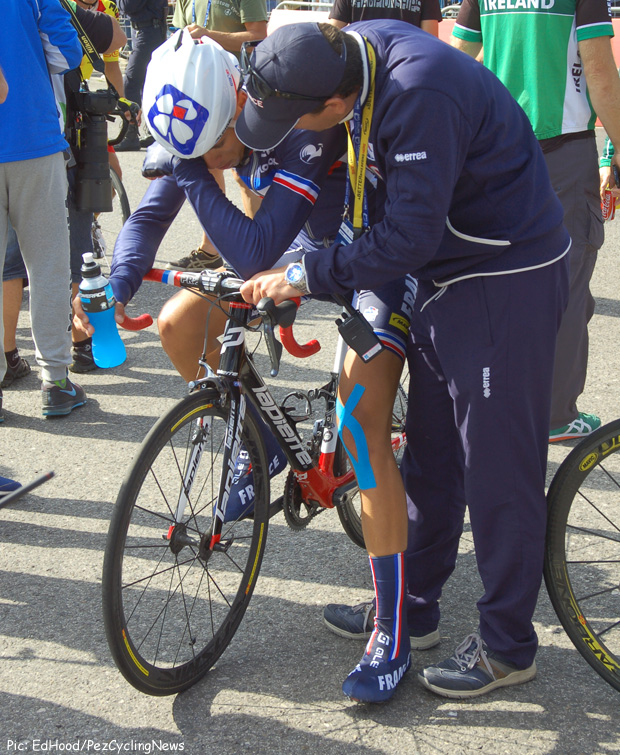 There’s the usual post finish chaos; in amongst it, Nacer Bouhanni’s young brother, Rayane cries quiet tears of disappointment – just like his big brother, winning is what counts. Big Bert Roosems is here in his role with Shimano; ‘another big guy wins, eh – not the light climber type – maybe we have a surprise tomorrow ?’ 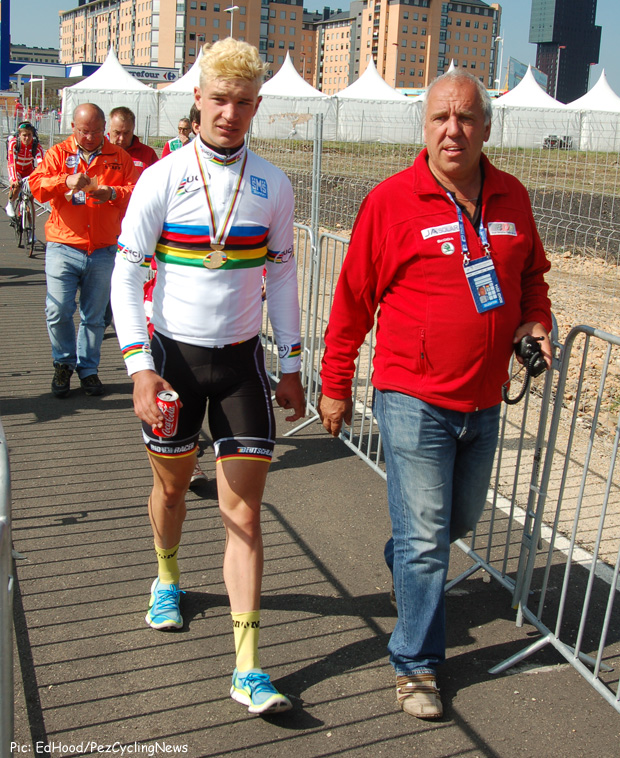 Bokeloh is indeed a ‘big laddie’ as we say in Scotland – he wouldn’t look out of place as a team pursuiter or maybe even kilometre rider.

It’s hot today, hotter than yesterday; the girls will get a good tan top up. It’s Cerveza time; an Estrella Galicia, golden and cool, just the job. An hour to start time for the girls, let’s go and check out that bus park. 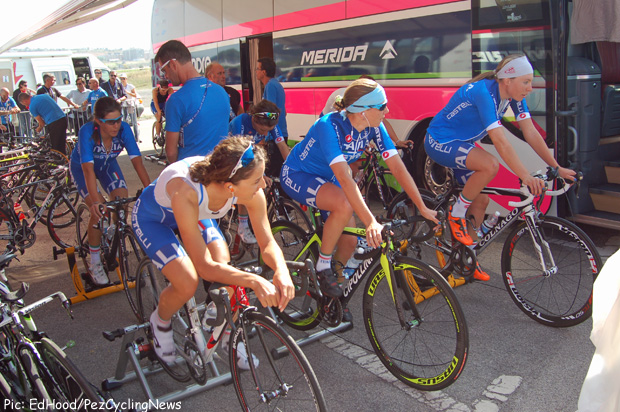 The Italian girls make the turbos hum beside the Lampre bus. 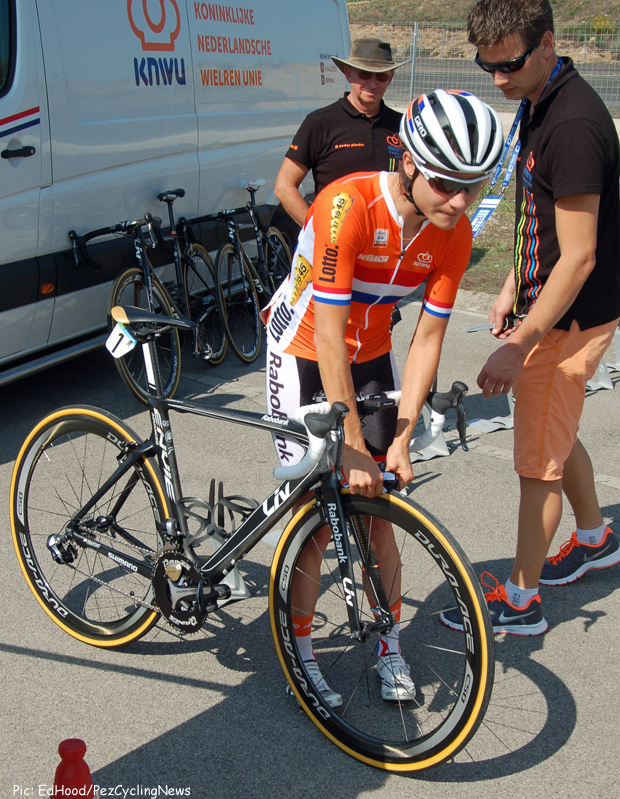 Meanwhile, Marianne Vos is in good fettle, over at the Rabobank/Netherlands bus – smiling, chatting – if she’s worried she’s making a good job of disguising it and checks her tyre pressures like a good pro.

The Sky bus, I’m lurking for Lizzie Armistead pics, I try to strike up a chat with one of the legion of helpers/hangers on.

‘Should be a good day for Lizzie?’ says I.

‘What about Vos in the TTT, a bluff or is she off form ?’

‘I don’t know’ and makes it clear he doesn’t want to talk to the likes of me. And then they wonder why everyone thinks they’re aloof and too sexy for their shirts . . . 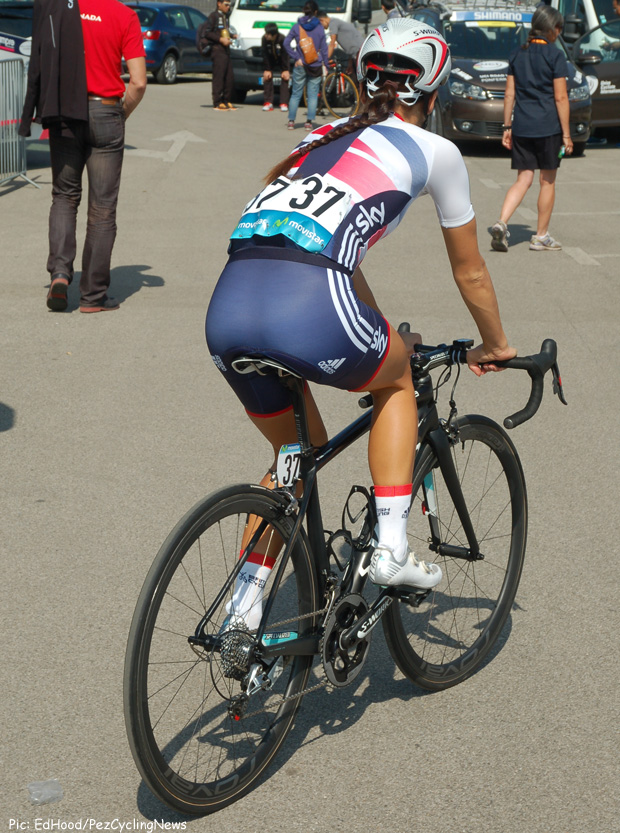 Lizzie is all nerves; ‘I’m going for a spin’ she tells the helpers and pedals off, her face a mask of worry. Meanwhile over at Team USA it’s all high fives and ‘let’s do this ladies!’ 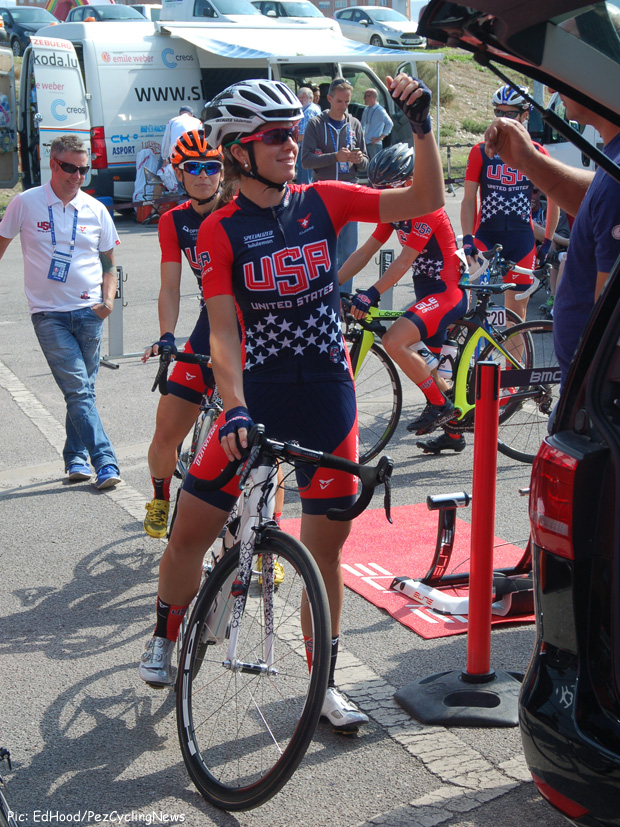 I wander on, past team cars, riders, cops – Whoa! I recognise that dude, it can’t be, it is – Abdou! The Tashkent Terror himself, Djamolidine Abdoujaparov, the world’s most lethal sprinter, back in the 80’s and 90’s and his English is good – we’ve been promised an interview. 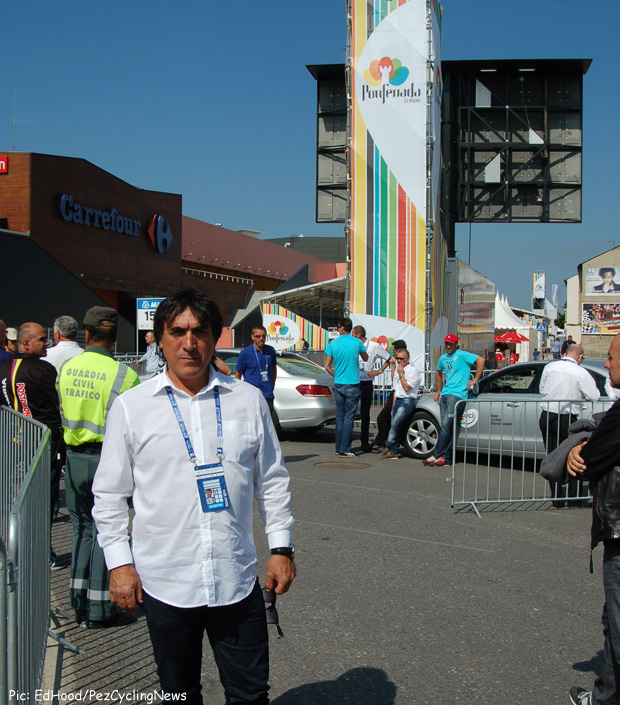 Damn; I forgot to ask how his birds are doing – he was a great man for his racing pigeons . . .

But we’re here for the Worlds and as the teams get called forward, I head back along the finish straight. I walked the town yesterday and don’t suppose it’ll have changed much overnight, so I’m heading for the hills, today. 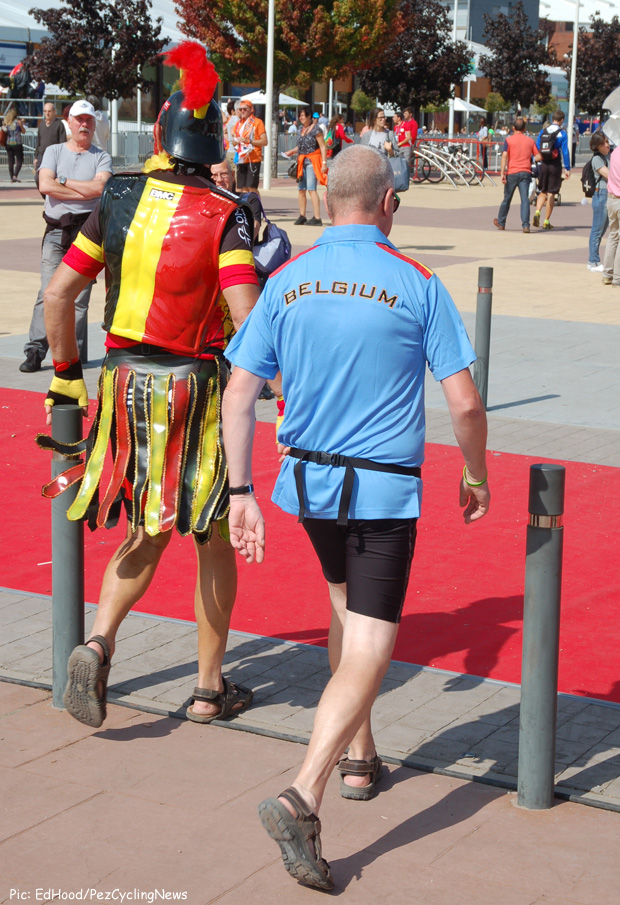 And QuickStep’s Roman Centurion is here – that’s a relief, Tom and the boys will need him, tomorrow. Towards the end of lap one, the Germans ride tempo, it’s efficient, far from ‘on’ – despite that, it’s well strung out. 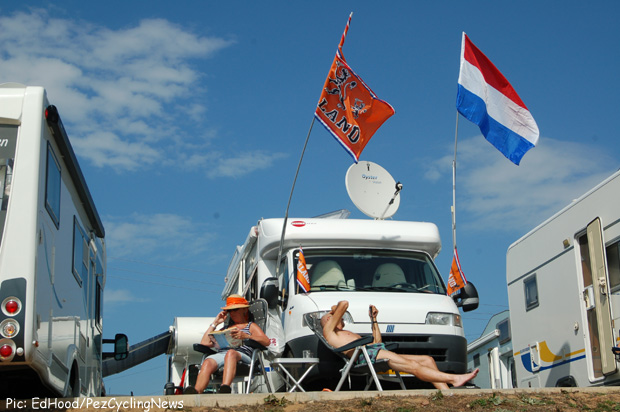 Onwards, upwards to the Belgian and Dutch camper vans, it’s quiet; they’re waiting for the ‘real race’ tomorrow with Tom, Phil and GVA. Lap two on the descent and there’s been a massive sort out on the climbs and the race is split over many minutes – the result of a big crash, I learned later. 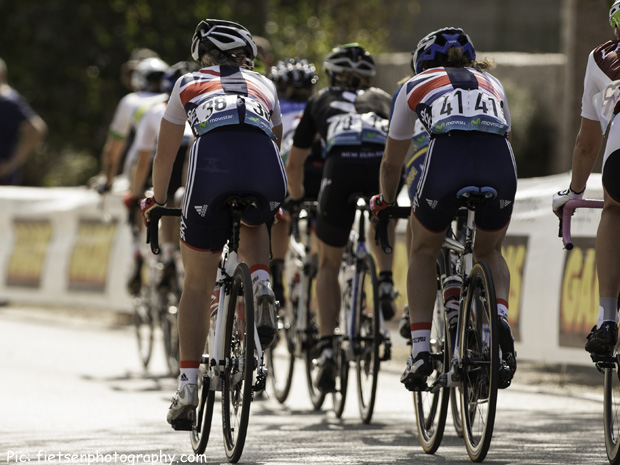 At least two GB girls are way off the pace, including former double world junior champion, Lucy Garner. And Vos has lost at least three of her team, all chasing fruitlessly – if you can’t descend then this is not the race for you. And the news for my race watching isn’t good on the left hand side of the road the barriers run into a fence and on the right hand side the dirt path behind the Armco is taped off with plenty of ‘voluntarios’ (volunteers) to make sure the rules are obeyed.

They’d never get away with this in Belgium or Italy. The climb is effectively off limits unless you’re up there before the start. Whilst the organisers understand how to zip things up tight, they certainly don’t have a grasp of how fans behave – even crossing points are few and far between. There’s little for a man to do save walk back into town look for arty photo ops and – have a beer. 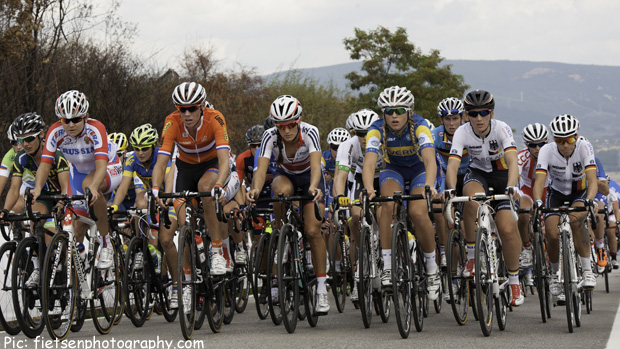 The peloton is compatto but much reduced on lap three. But there don’t seem to be as many stragglers – many of them must have hung a right into the pits, last time round. Ladies’ races aren’t my specialist subject so it was interesting last night when we discovered we were sharing our far distant hotel with the father of double Junior Ladies World Champion, Amalie Dideriksen of Denmark. He explained to us that it’s only a matter of weeks since she crashed badly on a concrete track in Seoul and was torn to shreds. 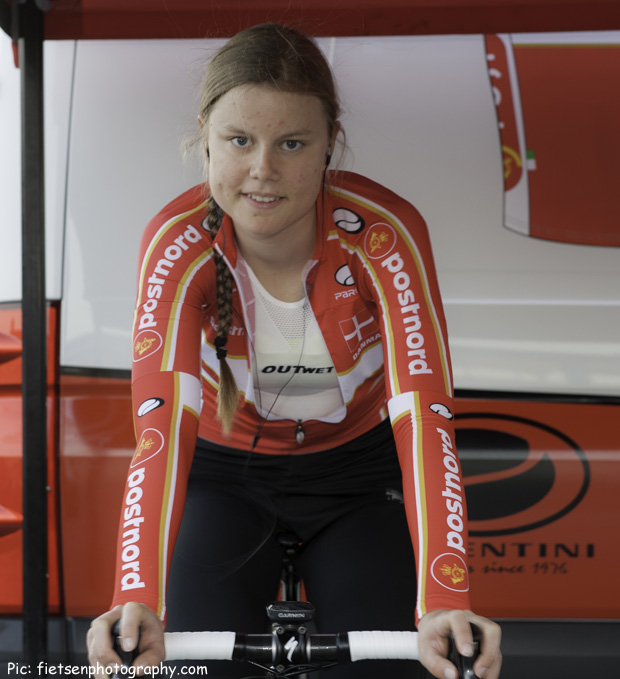 But she was back on the turbo within days then out training on the road on her mum’s ‘sit up and beg’ bike because she couldn’t bend or operate her gears. In the lead up to the Worlds she was doing three, four and five hour training rides around the circuit here at Ponferrada to prepare to defend her title. No shortage of grinta there. 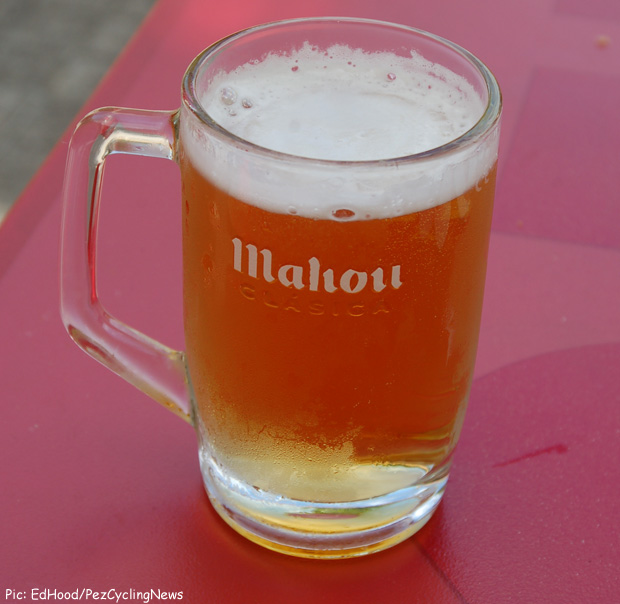 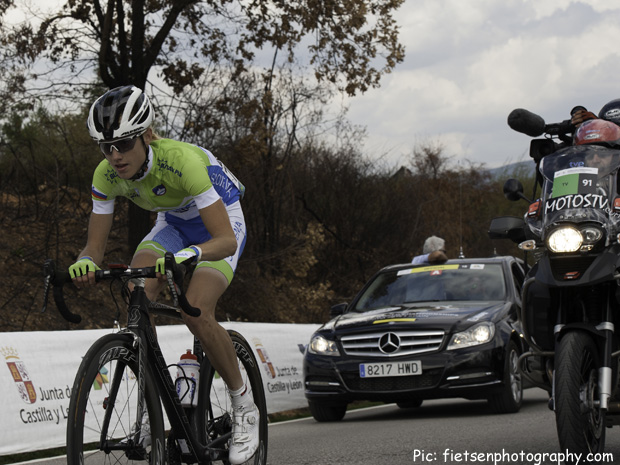 The fourth pass and a there’s a Slovenian lass just off the front in a ‘would someone like to join me, maybe?’ kind of way with the peloton a little slimmer than last time but still well bunched. 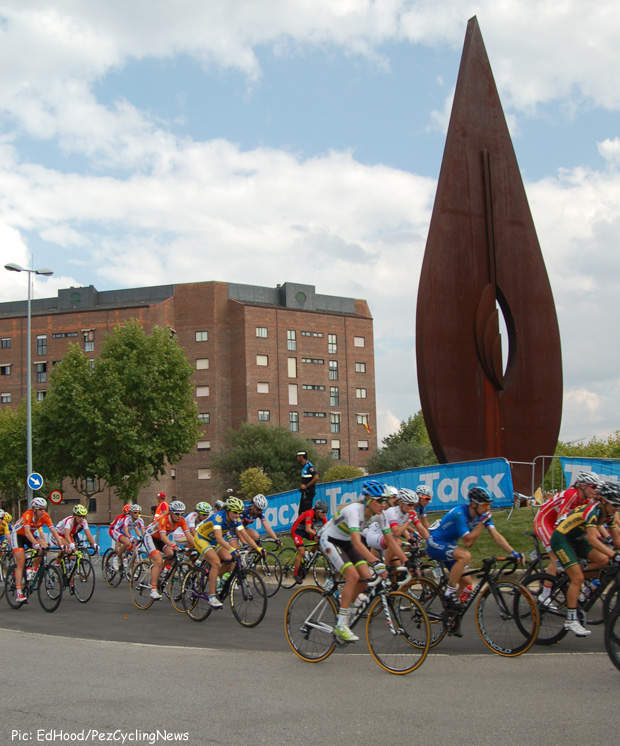 The fifth lap has speaker Anthony McCrossan telling us that it’s all set to explode; trouble is, it looks to me the same as it has been all day – compatto. Time for the grandstand . . .

It’s crowded in there but the view of the big screen is good and something is actually happening – Australia’s Rachel Neylan has attacked, is clear on the climb and has 18 seconds. Neylan is tieing up and the peloton have turned up the gas – they’re well rested – and we have group of 14 favourites clear. Armistead, Vos, Olds, Bronzini in the rain . . .

Vos leads, then attacks through the finish for the sixth pass and drags four clear – but it’s together again by the castle. The grandstand is like a cattle mart so I decant to just past the finish line and can breathe, again. Up on the screen it’s all together on the penultimate climb.

Trixi Worrack attacks for Germany but sends them a postcard first and gets nowhere. Then Stevens goes for the USA – to no avail. This is playing right into the fast finishing girls hands as the group congeals – Worrack goes again but, no dice. Van Dijk now but it’s snuffed – so negative.

The photogs shift from foot to foot – it’s OK boys, we can all go home, soon. It’s wet up on the climb and on the drop to the dam – they’re across and it’s the last climb. Armistead and Vos are well placed, Worrack goes but doesn’t have the watts. Stevens, Johansson – Armistead provokes a split with Vos, Johansson and Longo-Borghini. They’re off the climb on the flat run in, clear but they’re playing games – this will end badly, girls . . .

They’re swamped, Vos goes long but it’s way too early. France, from nowhere! Pauline Ferrand Prevot; she did what sprinters do – hid all day. 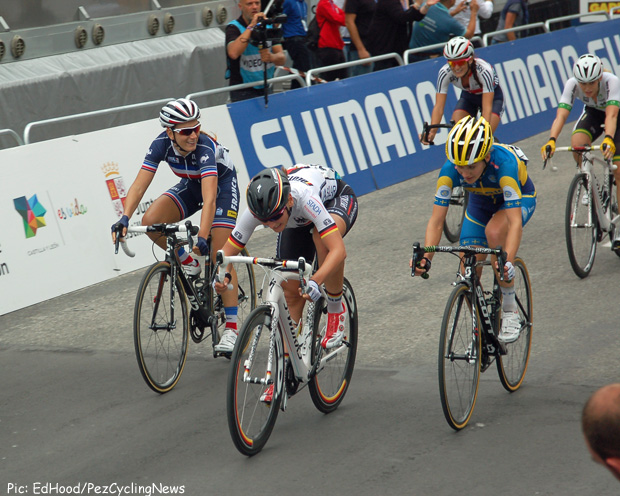 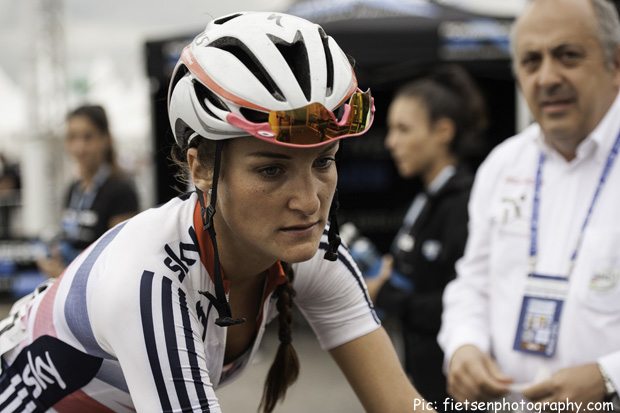 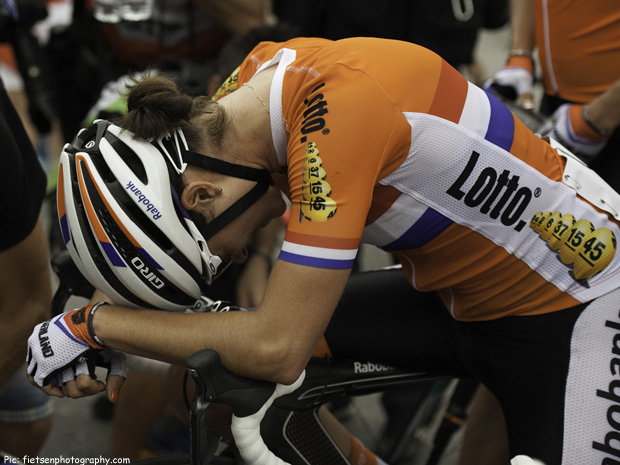 Armistead and Vos are devastated – I wish I could say, ‘they both rode great races’ but . . . .