Last year PEZ-Man Josh Horowitz used the Piuma Hill Climb to prove his love for his fiancй Rachel. After winning the race and her heart – he returned this year using PowerCranks to prove another point…

Ever since last year’s article, “Pez Man Wins Race, Gets Girl” and all the attention it received, there has been some contention between my fiancй and I whether the mountain top proposal was a grand romantic gesture or a giant publicity stunt. Although I’ve assured her over and over that writing the story didn’t even occur to me until after it was all over, I’m guessing there’s still a shadow of doubt in her mind. 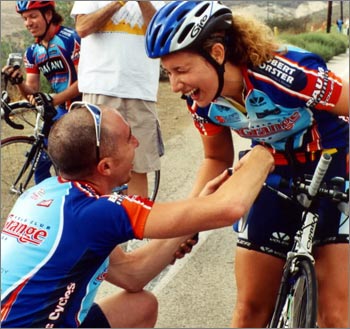 So when I told her I had an idea to top last year’s story and that I was going to write about it for Pez, this probably didn’t do much to boost the validity of my argument. I figured she already knows I’m a publicity hound (she uses a harsher word that also starts with an H sound), so at this point, it was too late to change her perception. 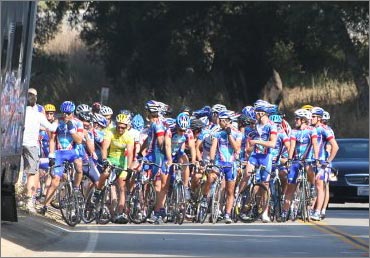 Some of the areas toughest hombres showed up for this year’s Piuma hill climb.

Same Great Stunt – Whole New Twist… er, Crank
Anyway, the “brilliant” idea I had to top last year’s story was of course to win the race again, but this time while racing on… PowerCranks! Now there were a few problems with this idea. After having done an entire winter of 25 to 30 hour weeks on the cranks, I hadn’t been on them much since the season started because of all the racing and traveling. The second problem was that this year’s Piuma Hill Climb had been moved up to June. This meant that it was neatly wedged in just two days after I returned from Elite Nationals in Park City and one week before I leave for Cascade in Oregon. Finally there was the problem that the Paketa with the PowerCranks weighs almost 5 pounds more than my Cannondale Six13. In other words, I wasn’t sure if I would be able to make it up the 2,500 foot climb let alone win the race.

The new light-weight PowerCranks going on… just remember to always tighten your bolts.

Nevertheless, the folks at PowerCranks were happy to play along and soon a pair of the light weight Cranks were on the way to my door. The plan was set in motion.

Exhausted from the drive back from 7500 feet in Park City, I slapped on the new cranks the night before the race and was ready to go. Since I was going to be at a disadvantage anyway, I figured why not go all the way and throw my heavy PowerTap wheel on so at least if I did win, I’d have some good data to report back.

Race Day
The race drew a huge field this year with over 50 riders from all categories at the start line. There was the usual suicide attack from the gun and then over the first steep section, the lead group of Cat 1’s and 2’s established their pace and started to motor over a flatter section. As I shifted into the big ring, I managed to stick the chain right between the big and small rings. Turned out I hadn’t tightened the bolts the night before and they had started to come loose. I free wheeled for about 20 seconds trying to get the chain to go back on with no luck. Finally as the lead group rode off into the distance, I stopped the bike to try to manually get the chain back on. Although it seemed like about 2 minutes, the reports from the pack which passed me one by one as I fumbling with my chain put my stop at about :40 to :50 seconds. Finally I got the chain back on and started to crank.

According to my PowerTap, my power for the next 4 minutes averaged 450 watts and peaked at 821. I caught the group fairly quickly only to find that my main competitor, Bryan Duff, last year’s second place finisher, had taken advantage of my misfortune and moved on up the road. Working with a teammate, we pushed away from the lead group and the chase was on. Finally, I jumped across the final 50 meters on my own and with about 1.5 km to go on the first part of the climb, the race was neck and neck.

Josh & Bryan putting the hurt on.

After a short fast descent, we made the left turn onto the final climb. At this point I still felt good, but the combination of the chase and the PowerCranks was starting to tire me out. To make matters worse, Bryan was sitting on my wheel refusing to take a pull. Last year, he had done the same thing, assuring me the whole time that he would not sprint around me at the line. Not trusting such a big victory (remember I was proposing) to chance, I dropped him anyway and won the race. This time, I wasn’t so sure if an attack would work so I took him up on his offer and pulled him to the finish. At the end, he feigned an attack as if he was going to break our deal, but ended up pulling back and I crossed the line for my first PowerCranks race victory.

All in all it was a great training ride and proof that with enough miles, one can adapt to PowerCranks the way they would with any other crank. Despite my self-induced technical problems and heavier bike, my time was only 30 seconds slower than last year. Average power was 375 watts and cadence averaged 82 rpm. For those who haven’t ridden the cranks, that’s a pretty high cadence, especially for a climb and I was quite pleased with that. 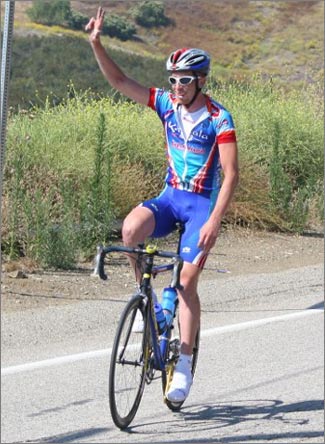 Josh and his PowerCranks – reunited at last.

By the way, Rachael and I are still happily engaged and putting off the stress of planning a wedding until at least the end of the racing season.