Just a few short weeks from now, one of the largest organized group cycling events on the West Coast will take place between Vancouver and Whistler. The RBC GranFondo Whistler is the first ‘gran fondo’ to hit these parts, and was sold out months ago. I talked to the men behind the ride on one of the most scenic stretches of highway anywhere.

While the popularity of cycling has grown substantially in North American in just the past few years, the number of opportunities to ride in organized events in great locations has not. The competitive racing scene continues its love/ hate relationship with sponsorship funding and hostile local councils, and unless you take out a racing license to contest the Tuesday night World Championships, or like spending long hours in your car driving to races that might offer 2-3 hours of ride time over a weekend, there’s little left in the way of big, fun rides for the competitive but “I don’t want to race” type of rider. 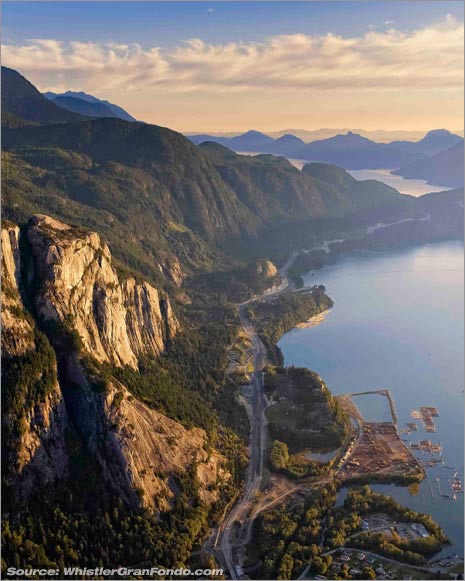 And based on the short time it took to sell out this event, there’s a huge and unsatisfied demand for this type of ride. Although a staple of cycling culture on Europe, gran fondos are just now catching on in North America, but with top pros like Levi Leipheimer and Chris Horner adding their names as ride patrons, the rides are gaining speed fast and show big promise for the future. And as more local governing officials embrace cycling as a way to improve their communities and win votes, the bureaucratic blockages that have derailed countless cycling events for years, may soon disappear.

The RBC GranFondo Whistler is set to run September 11th from Vancouver to Whistler BC – along an amazingly spectacular corridor called the ‘Sea To Sky’ highway. The point-to-point ride is pegged at 120km and boasts 2400m of climbing enroute to the 628m altitude finish – which means a lot of up and down. There’s also a ‘medio’ fondo that runs half distance from Squamish. 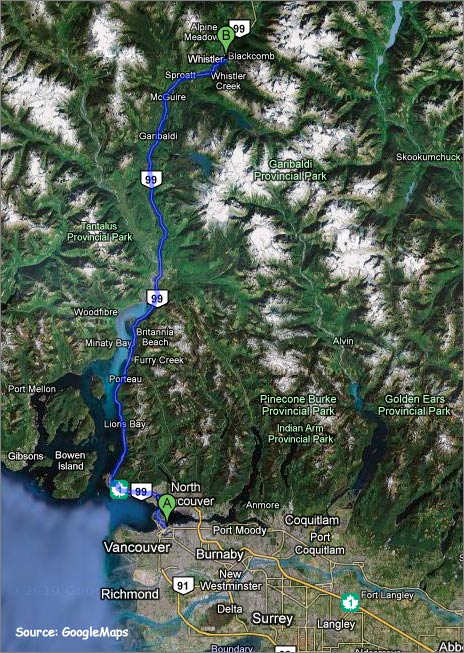 A perfect mix of seaside and lower alpine riding along BC’s famous Sea To Sky highway.

The recent 2010 Winter Olympics saw a massive improvement in the highway from Vancouver to Whistler, and while some 20-odd years ago there actually was a road race along the route (which North America’s first ever TDF yellow jersey Alex Steida once won), the road has been largely unrideable as traffic to Whistler increased while the road condition deteriorated.

Suffice to say this will be a momentous occasion, and one that is seeing local roads flooded with riders in training mode. I talked with organizers Neil McKinnon and Kevin Thomson, the founders of GrandFondo Canada, about making this event a reality. Both are passionate cyclists and event specialists, and back in 2007, while Neil was riding the 13,000 person Gran Fondo Novi Colli in Italy, and Kevin was driving the Sea to Sky highway, their idea for a ride to Whistler simultaneously combusted.

True to the spirit of the great gran fondos of Europe, this course offers plenty of climbing.

Pez: The ride itself is not easy – 120km and 2400m of climbing, all starting at sea level. Given the lack of cycling events in the area, and a road racing season that effectively ended months ago, traditionally it’s only the hardcores and very enthusiastic riders who’ll have decent fitness for the ride, but the registration of 4000 riders shows a much broader interest. Are you prepared for a mass bailout of the unprepared riders and how will you handle it?

Neil: Our registration is actually at 4000 registered riders and it only took us 3 months of registration to get them. Our riders are what we’re calling “enthusiastic recreationalists”. With an average age of 45, we know it’s an event not for the “hardcore racers” but for those who live to ride and love new challenges. We believe our riders are hardworking in both life and sport. They are preparing for the challenge of the ride as they would prepare for work through planning, routine, and discipline. These people are very much goal-oriented and we believe that the vast majority will push themselves to accomplish the daunting task of summiting the route. In the event that there are individual challenges, we have contingencies for SAG wagon and support. 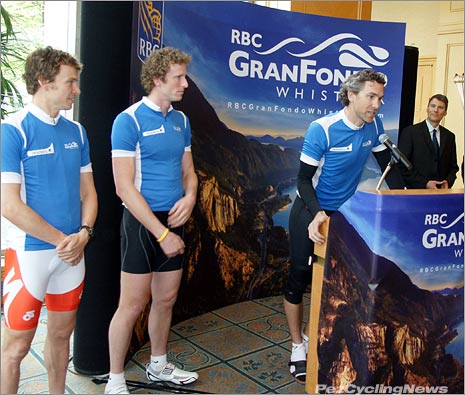 Pez: It’s no secret that cycling events in North America fall prey to local governments and councils who refuse to support closing city streets for a few hours. The Sea To Sky Highway is the only logical way to Whistler from Vancouver, and you’ve got city councils for at least 4 different municipalities to deal with. How did you get the ‘local powers’ on board?

Kevin: Preparation! We started talking early (2007) to the various powers, we were 100% transparent with full disclosure of our plans, we have a comprehensive and detailed traffic management plan, and we have a team of stakeholders that believe in the event. The 2010 Winter Olympic Games truly proved to everyone in BC that there were no limits to the kind event that this province can put on; there’s now an appetite for what even a few years ago was considered impossible.

Pez: Putting on an event of this size and caliber is a huge undertaking, but most entrants will only see it as a chance to ride their bike on an amazing (and closed) road. What are some of the organizational challenges you had to overcome?

Neil: It is a huge undertaking that has been in the planning for over 3 years. There’s been incredible and innovative traffic planning to continue the flow of traffic on a busy highway, even as we have a dedicated cycling lane. Ensuring adequate neutral support as well as adequate refueling for 4,000. Creating a finish line atmosphere that truly captures the majesty of the accomplishment of the event. But at the end of the day, the participant really doesn’t care about all our work; all they care about is a safe exciting trip to Whistler and a magical experience that starts at picking up their free arm warmers Friday at package pick up to listening to stories about the yellow jersey from Alex Steida Saturday night over a beer.

Pez: The Future: Assuming everything goes to plan, what’s next for you guys, and where do you see this idea growing?

Kevin: We think that cycling has a bright future and the ‘GranFondo’ concept needs to be defined. There are lots of so called “GranFondo’s” that fall short of expectation. They do not earn the definition. We want to define what a GranFondo should be, and set the bar that all GranFondo’s will be measured by. GRAND. That means fantastic or unobtainable routes that cyclists would love to ride, it means mass and a celebration of the sport, it means creating legacy and inspiring the population to get on their bike, and it means meaningful experience.

The RBC GranFondo Whistler is North America’s largest inaugural cycling event; we foresee it growing to 10,000 riders in 5 years. And yes we are scouting and in conversations with ‘Gran’ locations in Canada…more rides coming in 2011!
———-

The ride rolls out of downtown Vancouver at 7:00 AM precisely on September 11th, with the start chute opening at 6:00 AM. But the early rise will be worth it as we’ll enjoy a rolling closure along one full lane of the Sea To Sky Highway, supported rest stops, and a host of events at the finish in Whistler, which for me will hopefully be before lunch.

The anticipation here in Vancouver is very real for this epic day. In addition to presenting my own first chance to ride this complete distance in a much safer environment, it’s presented a great chance to reconnect with many of my old riding buddies, which could possibly be the best part of the whole day.

• See the RBC GranFondo Whistler website.
• Registration for 2011 opens on September 13th for this year’s riders and volunteers, and on the 20th to the public.