Rook Campbell raced her first Primavera Rosa last Saturday and was smitten when I talked to her Tuesday. It’s obvious she’s fallen in love with this race and plans a long-term affair with the Italian classic. Here’s how the day unfolded…

Eyes Bigger Than The Stomach: A Pre Course Drive
Viewing a course from a team car is a rather helpful thing, however, the effort-free perspective distorts loads of things. The day before the race, our team director, Barsottelli, escorted us through a fully narrated pre-race drive, and his words and descriptions were those of someone who knows every curve and gradient by heart. Probably, the backseat voyage with my very European rally driving style director made every corner a more severe switchback, and I saw steeper grades than existed. Naturally, I didn’t know this until the race.

The race began in Varazze, and we set off for some 60k of flat undulations along the coast, moving along lined streets of fans cheering us on to San Remo. The only places where silence seemed to come was in the tunnels that we occasionally entered.

The first of the three Capi climbs, Capa Mele, went by smoothly. For me, this signaled the second guessing mode, where I wasn’t sure whether to count this as one or not. Then came two, Capa Cervo, and I thought that maybe this was still Capa one. The car had exaggerated my visuals. Then, Capa three, Capa Berta, and here I was certain that this was three.

Driving the course gives you the visual markers and you have the kilometer readings of the cyclometer, but you still wait to confirm how you feel with what you expected to feel from the pre race drive in the car. 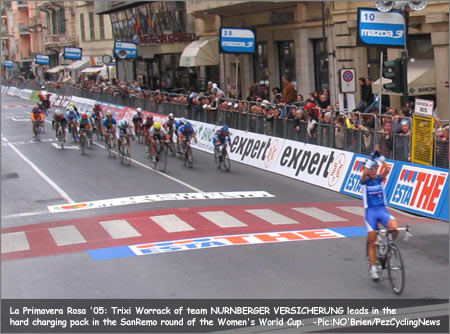 The Climb That Brakes The Peloton
The climb to Cipressa came pretty immediately after Capa Three. The group splintered just as predicted, chains fell and riders exploded just as predicted. It was a first few minutes of out and out climbing, with the peloton further splintering more and more, up and up. Riding a climb that finishes with a false flat is made better when you expect it, and I could hear Barsottelli’s voice, and our legs were grinding this out in some sort of bliss of derangement.

Unfortunately, for me, it was too late. The move and the race had happened, and I was in between groups. Teammate, Katia Longhin, was ahead in the front group with Worrack, Cooke, Melchers, Wood, Neben and Schleiker but in the last 2 kilometers of Cipressa, she too was splintered back and left chasing. 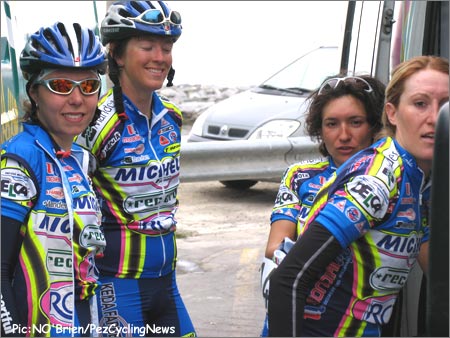 Rook and her teammates just after the finish. That’s Rook with her eyes closed – checking to see if she’s dreaming.

”Rook Campbell: Please report To…
My name was called as I crossed the finish line, but this time it was not a victory call so much as a call to report to the antidoping control tent. This was exciting for me, as it was my first time, and I felt rather professional with this privilege. Though I want my next visit there and next announcement of crossing the finish line to be a result of a podium placement. San Remo is a course I will dream more and more about, and love is not too strong of a word.

Rook Campbell is a 28 year old American pro racer living in Lucca and riding with the Michela Fanini team. In the coming months, she hopes to share her experiences of being a professional cyclist in Europe on a women’s team, and to deliver a little of the road grit, euphoria, and stupor that comes her way.

Oh My Aching Back – Part III