Rider Feature: If you have ever pushed a pedal in anger you will have dreamed of riding as a professional in a top team in the big races. Jordan Cheyne is no different, except that he has realized his dream. Here is his story and his ‘defining chapter’ with the Elevate-KHS team.

When my teammate James Piccoli fought doggedly across the finish line of the final stage of the Larry H Miller Tour of Utah he put the finishing touch on a story that the team had been writing for years. He cemented his 2nd place overall in the race and scored the biggest result in the history of Elevate-KHS or almost any Continental team. James, perhaps more than any other rider represents the spirit of Elevate-KHS. He has carefully assembled his previously overlooked raw talent into a winning package and has become the best bike racer in North America in 2019. From the outside perspective it might seem like an overnight success but nothing could be further from the truth. The narrative of the Elevate-KHS is no different. 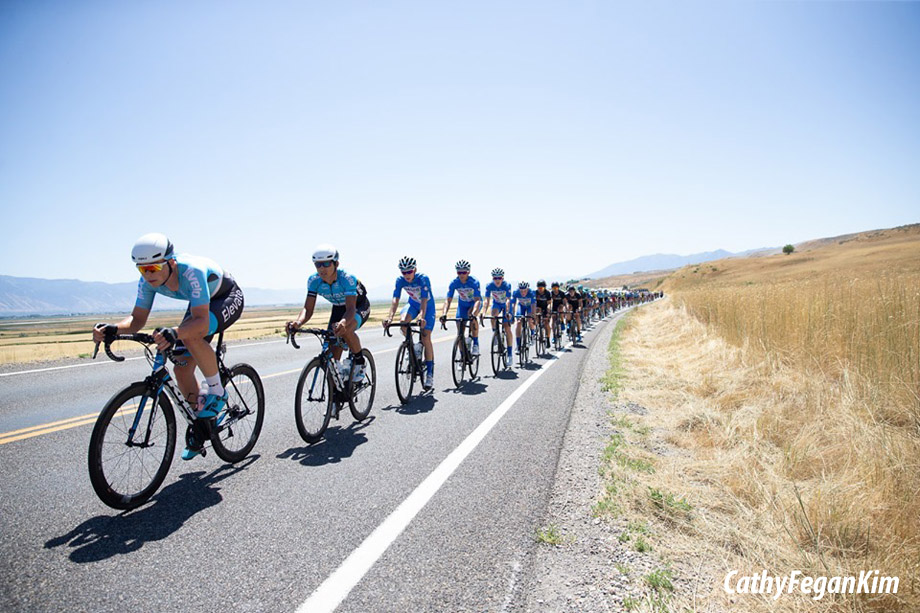 An Uncertain Start
When I put pen to paper and made the move to Elevate KHS in the fall of 2017 I remember saying “I’m going there to win” more than a few times as a sort of justification. A more honest assessment would have been “I’m going there because they want to take me” which is often the only quality that matters when trying to stay employed in cycling. I did need a change though and despite not having any real confidence in the prospects – I did want to go there and win.

In two seasons at Jelly Belly we accomplished some amazing results highlighted by an epic win for Lachlan Morton at the 2016 Tour of Utah. In that result we became the first Continental team to win a race at that level on American soil. Riding on Jelly Belly was special too, I always felt like I was part of history riding for America’s oldest and arguably most loved team. I will always be grateful for my time there but it was time to move on. I wanted to race for myself and to try to be a leader instead of a helper and Elevate-KHS would give me that chance. I had no idea just what a good a chance it would turn out to be. 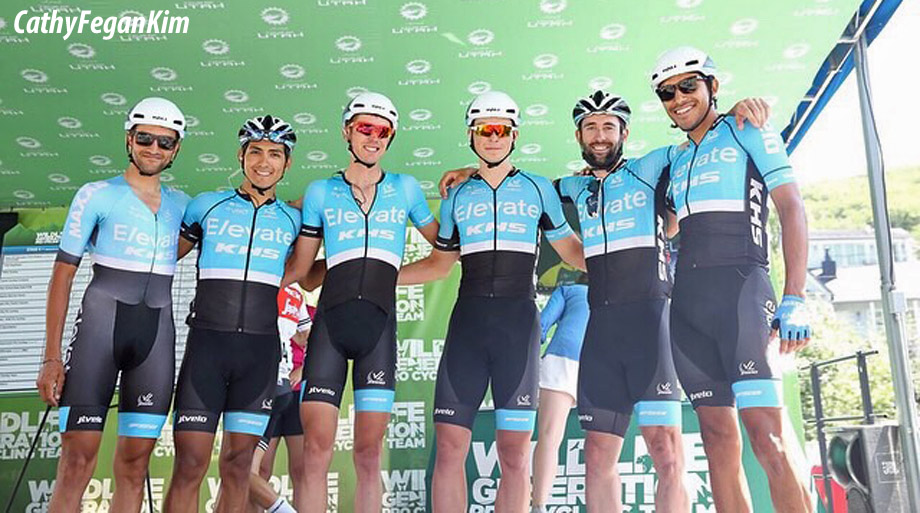 It was a harsh reality check but maybe one that we all needed. That was director Paul Abrahams opening line in our first team camp meeting back in February 2018. The message was clear, Elevate-KHS wasn’t a development team and it wasn’t a comfortable happy hunting ground for old pros to ride out the tail end of their careers. 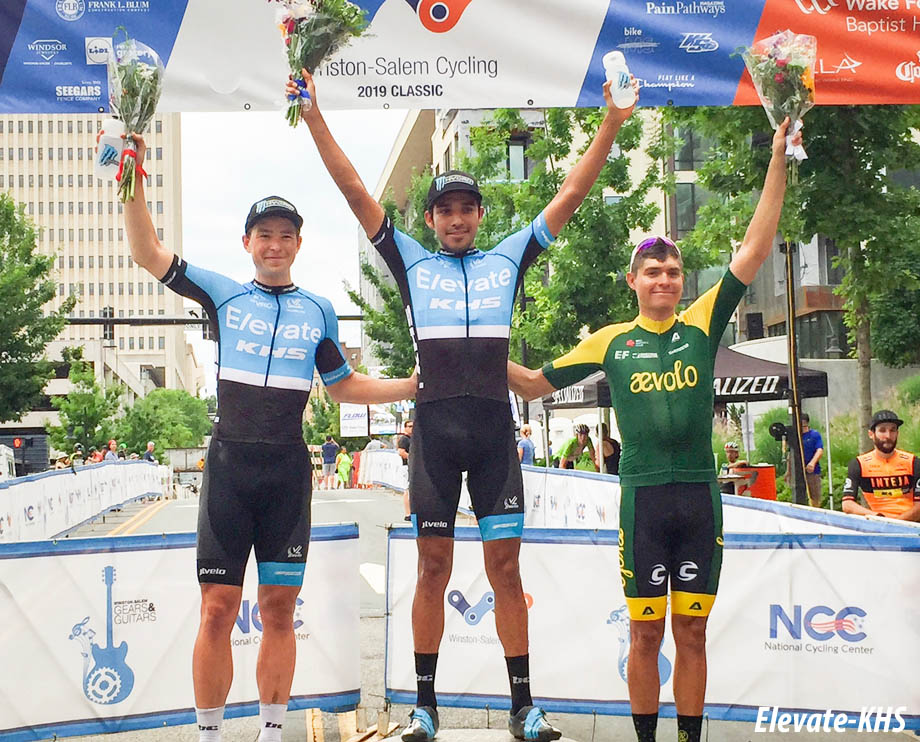 Uli and George – 1-2 in Winston Salem

Almost everyone sitting in that room was between 26 and 30, the pinch point in any cyclist’s career. We were all too old. When you are a U23 rider even a glimpse of promise in a big race might get you the attention of a higher-level team. In our age range as supposedly entered our physiological prime, you have to win to get any attention and win a lot. Obviously none of us had done that yet or we would have been at a World Tour training resort in Calpe rather than sitting on the carpet listening to Paul’s speech. Maybe Paul was the only person present who believed we still could.

I started to believe a little more day-by-day as Paul and Assistant DS Heath Blackgrove ran an exceptionally focused and professional camp. I had never drilled so much on lead-outs and race situations and I had certainly never spent the evening hours breaking down game film of the previous year’s races. I started to understand the team ethic: We will do everything we can to be better and that is how will win. 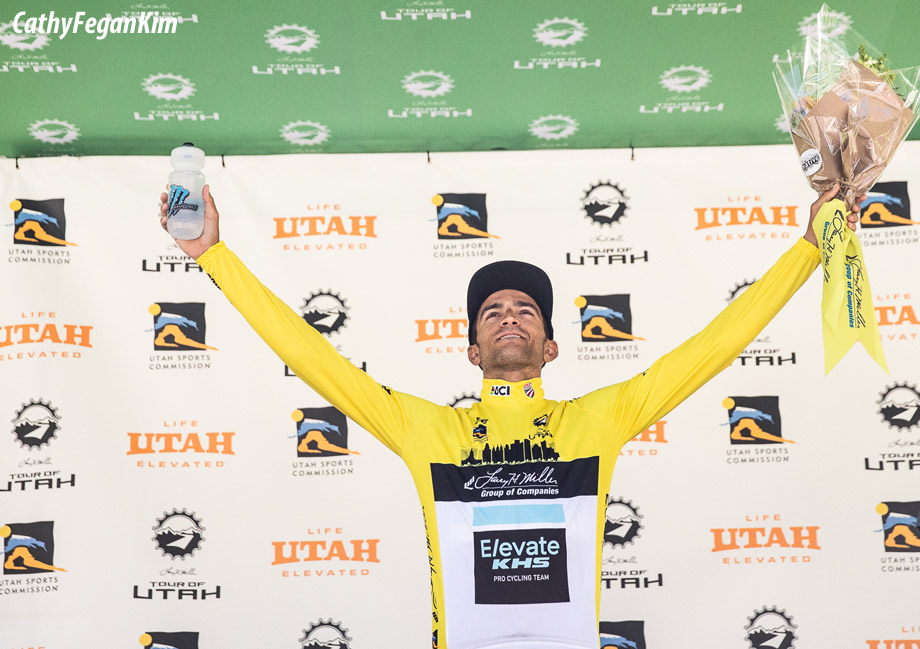 Taking it to the Top Step
“I don’t ever want to hear about the next race. You’ve got a race today so go race it”

More than anything that is the core attitude of team Elevate-KHS. Every time we line up we are going for it. We aren’t thinking about building up to the big goal race of the year or about fine-tuning our fitness for the months ahead. It is today and the time is now. 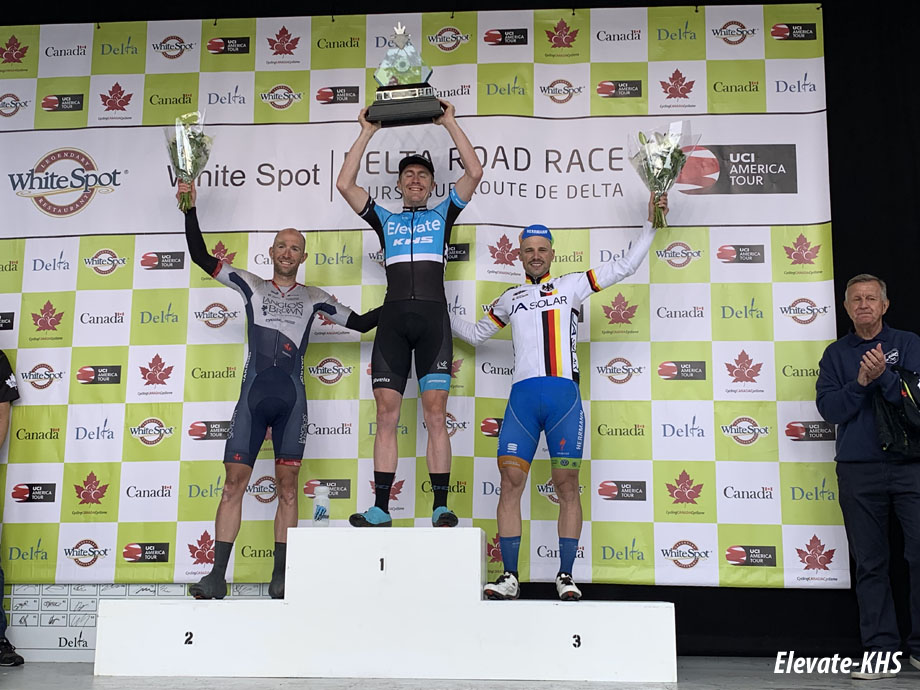 I really felt that for the first time in the Highland Circuit of the Redlands Bicycle Classic last year. On the final lap, our only option for a result up the punchy hilltop finish was James. I think I was holding a top ten GC position but in that moment I didn’t care anymore. I saw an opening with 2km to go and drove James to the base of the climb in second wheel where he launched a searing attack and nabbed a 3rd place finish. I, on the other hand, was completely spent and lost 2 minutes in the last 500m. But that was it. I was racing for now and not biding my time for minor result or conserving for the stages to come. The next night the team took control of the iconic Redlands criterium and took a 1-2 finish with Sam Bassetti taking the biggest win of his career to that point. The train was rolling and we didn’t look back.

We won a stage of Joe Martin next, racked up criterium wins across the country and put an exclamation point on the early season with Sam’s stunning victory at the UCI Winston Salem Classic. There were growing pains and some tough post race meetings but the results were incredible. For me the season’s high point came when James and I took on Canada’s biggest stage race at the Tour de Beauce. After a run of disappointing stages for us both, we attacked the final weekend and launched James into a massive come from behind victory. I think that was when James really became a winner and when I showed my true value as a teammate. 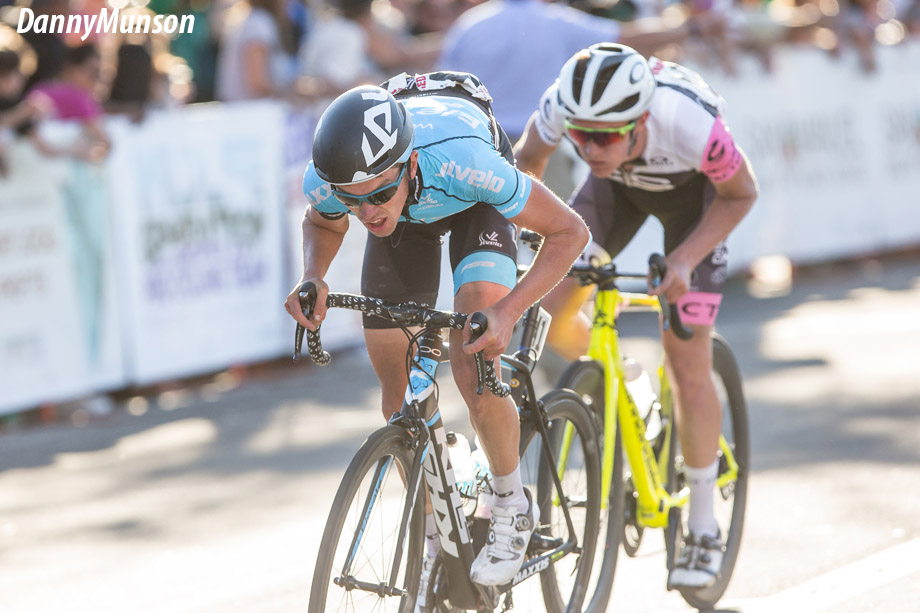 The Confirmation
“Its going to be a tough week for Picolli, his team is one of the weaker ones here”

That’s what we all got to hear from the commentators watching the rebroadcast of Stage 1 of the 2019 Tour of Utah. James had the yellow jersey and Elevate-KHS was ranked number one on the domestic circuit. It didn’t matter at all. To the larger cycling media we were still a rag tag team lucky to even share the road with our Pro Continental and World Tour competitors. Even the race officials seemed to write James and the team off, penalizing him 20 seconds after a routine mechanical and a textbook chase back to the bunch. It seemed like a forgone conclusion that we would mess this up somehow. James was a star on his own and at some point his underpowered little team would let him down. 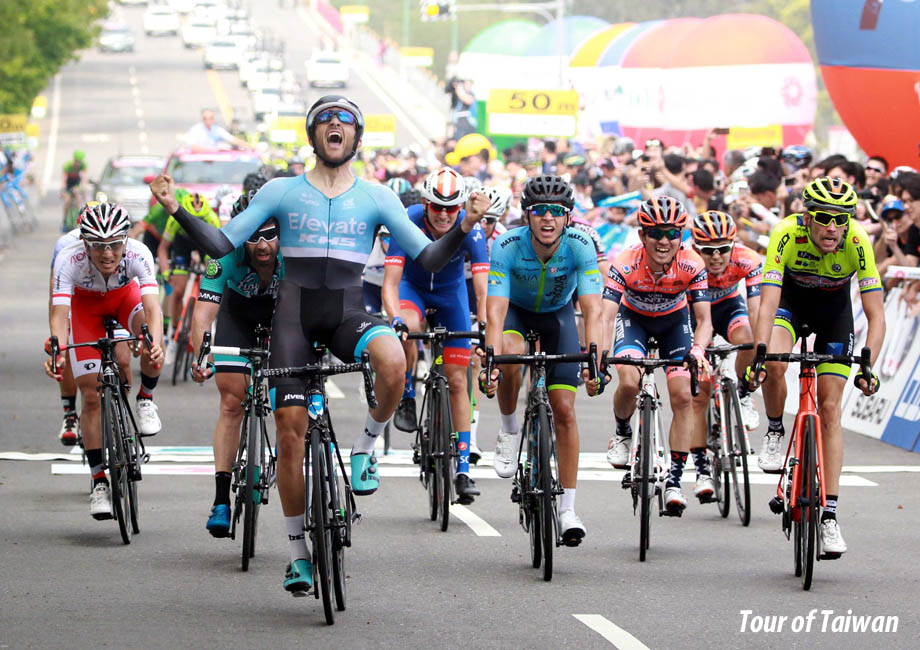 James winning at the Tour of Taiwan

That never happened. Everyday the team had complete focus never left any doubt. On Stage 3 we even took control on one of the hardest stages of the race and shredded the peloton to try to set James up for the win. Israel Cycling Academy’s Ben Hermans was too strong and James could never shake him from the overall lead once he took it on Stage 2. Nonetheless, the team effort was almost flawless. Our TT specialist George Simpson singlehandedly drove the peloton across Utah to protect our position. Our so-called sprinters Eric, Uli and Alfredo used their speed to deliver James to the bottom of the key climbs in prime position. I tried to call the right shots on the road and stay with James over the grueling climbs as the race shattered nearly every day. James was unflappable and never gave up all the way until the finish line in Park City.

After the finish the mood wasn’t the jubilation of victory but the satisfaction of a job well done. It wasn’t about proving anyone wrong but I think we ticked that box along the way. A stage win, a well defended 2nd place overall and the most aggressive rider’s jersey in the biggest domestic race on the calendar speak for themselves. 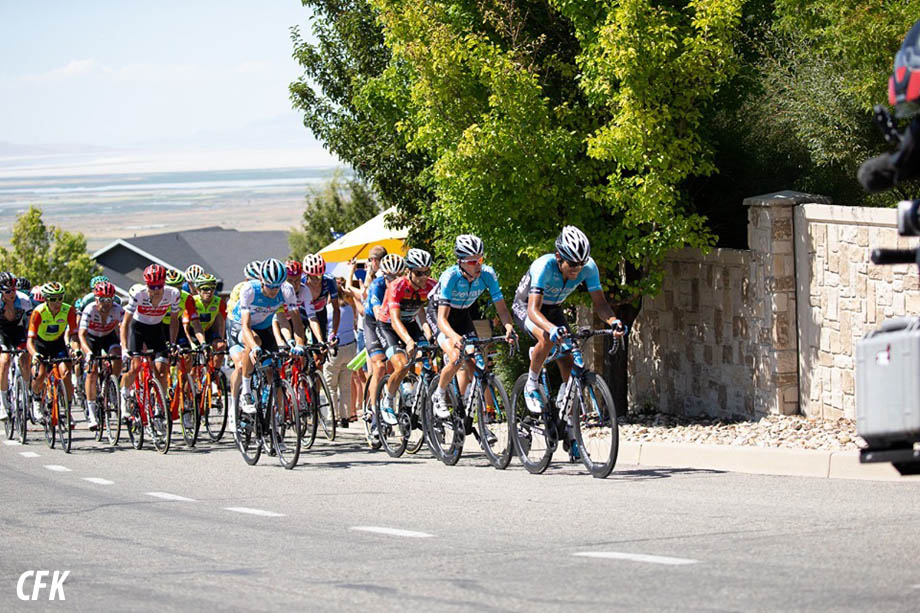 Ratcheting up the pace for James

Racing for Today
It wasn’t the end of the Elevate-KHS story by any means but for me it was the perfect ending to our defining chapter. We left almost nothing on the table this season and won wherever we went. Personally I won 5 races in 2019 and took my career to a new level. In my two seasons on Elevate-KHS we have won over 100 times. For reference, in my 2 years at Jelly Belly our “W” column was in the single digits.

James might be the best outward representation of our success. He has fulfilled the lofty requirements for a rider our age to move up in the sport. He bought into the team and Paul’s philosophy and did “the thing”. He won and he won a lot. Wherever he lands in 2020, he earned his spot by going for it every single time that we lined up on a starting line. He raced for today and it paid off.

Elevate-KHS has raced for today every race day for the past two seasons. It is amazing the difference that change in mindset has made. Cycling is a sport full of excuses, ego and preconceived limitations that can cause a team to lose races before they even start. When you breakthrough all of that the path is clear to achieve what you are actually capable of as a team. That has been the story of Elevate-KHS and it has been the ride of my life. 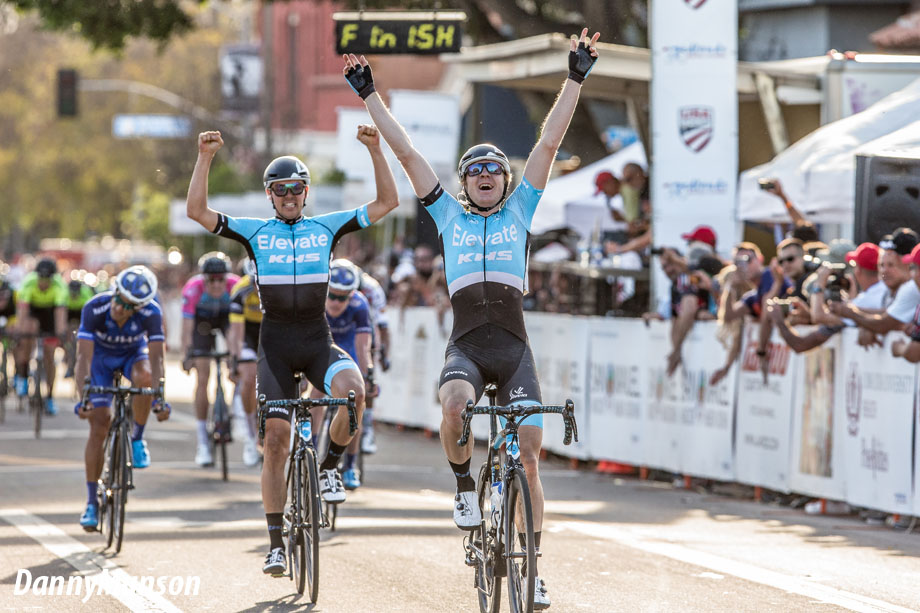