Mobile Bike Museum: We do like a bit of ‘Retro’ here at PEZ and the 70s, 80s and 90s were probably the best years for artisan bikes ridden by the professionals – Before the ‘all the same’ plastic bikes of today. Ed Hood heard about ‘Racing Relics USA’ and thought he had better find out more about the mobile bike museum from the curator; Bill Collier. 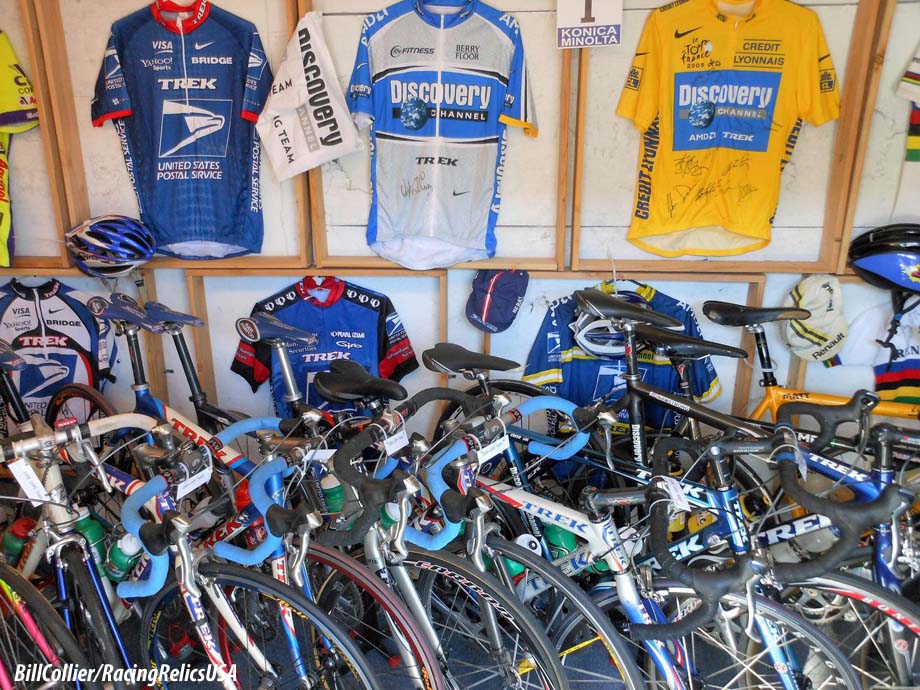 “Racing Relics USA is a mobile cycling museum which travels throughout the USA to exhibit bicycles – including those from race teams – also cycling apparel and memorabilia from the past to the present.

A collection of bicycles that travels to major sports and cycling events displaying cycling treasures from teams and riders names that you may know – and some a little more obscure.
Racing Relics USA has a veteran and vintage exhibit from 1860’s boneshaker and penny farthings bicycles through balloon tire, BMX, older steel race bikes up to more modern aluminum and carbon machines.” 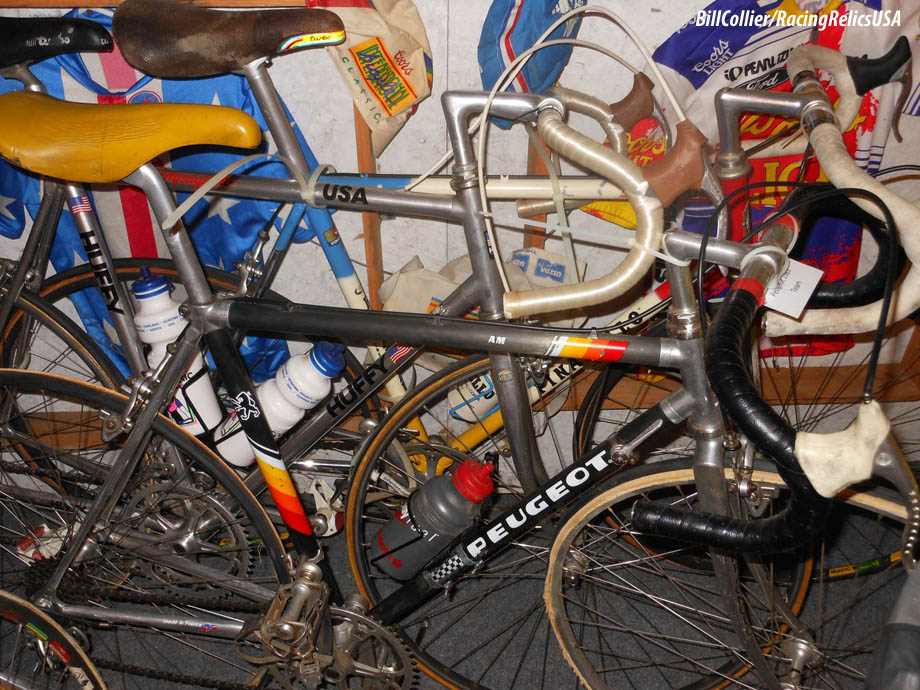 Here at PEZ we decided we needed to find out more so contacted the man behind Racing Relics USA, Bill Collier by name; here’s what he had to say:

PEZ: Where did the idea come from, Bill?
Bill Collier: Having a bike shop for 33 years you begin collecting bikes. Originally I wanted to build a museum because I started collecting antiques like pedal cars, trains, art, Native North American and Asian artifacts, soap box derby cars and toys. But I already had a hundred bikes and cycling was my joy. When I closed my store of 33 years, I was going to construct a 40,000 sq. ft. building to house the Collier’s Family Childhood Museum. But it never happened, doing it with a general contractor was going to take a lot of money. So after a couple of years I thought of putting a mobile cycling museum together. Then as more events happened I added more items to enhance the presentation of Racing Relics USA for a nicer display. 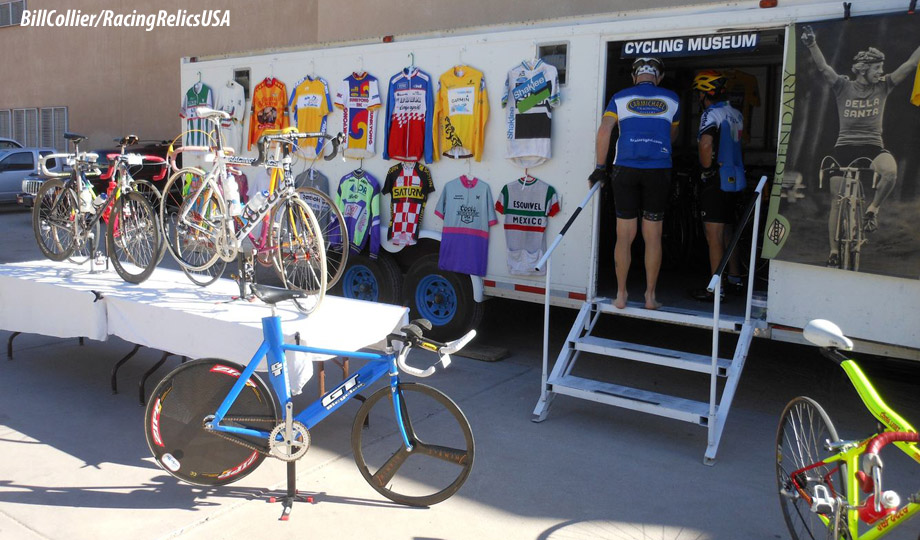 PEZ: Tell us about the rig you use to transport the exhibition.
The trailer is a 35 footer, with tractor unit a total of 50 feet; so it displays nicely – in the trailer are signed jerseys and bikes. Also there are helmets, caps, bags, etc. that line the walls among the 30-50 bikes which come mainly from USA riders but also Europeans. Most are originals but here are some replicas to fill in gaps in a team or year’s presentation. We have a picture show outside with displays too. 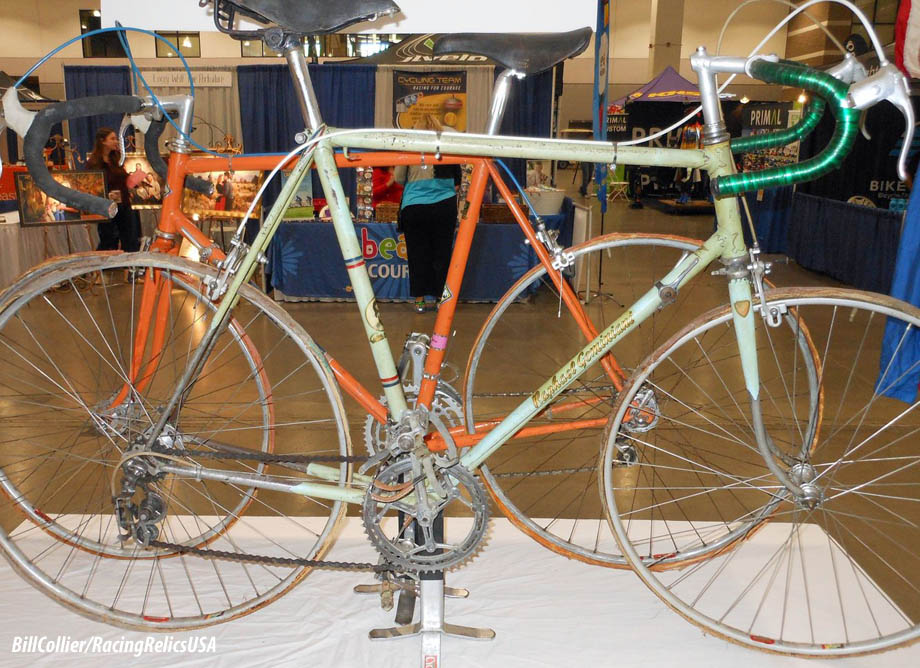 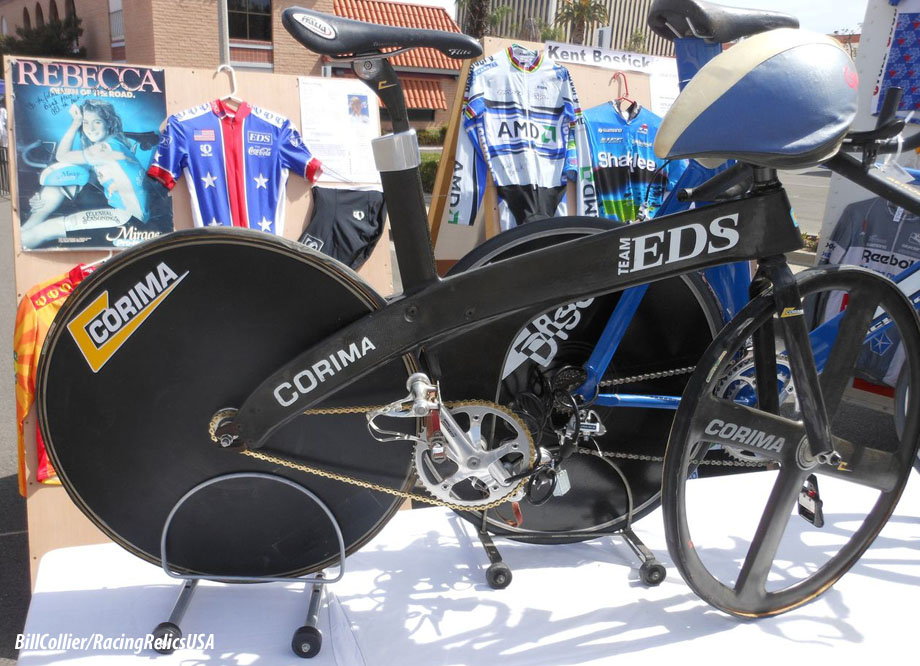 PEZ: How many bikes do you have in total?
There are about 350 or so in the collection, from 1860’s boneshaker, penny farthings, 1900’s bikes, skip tooth [1” pitch transmission, ed.], balloon tire, Whizzers [motorised bikes, ed.], BMX, Schwinn’s and all manner of road and track bikes up to the present day to. 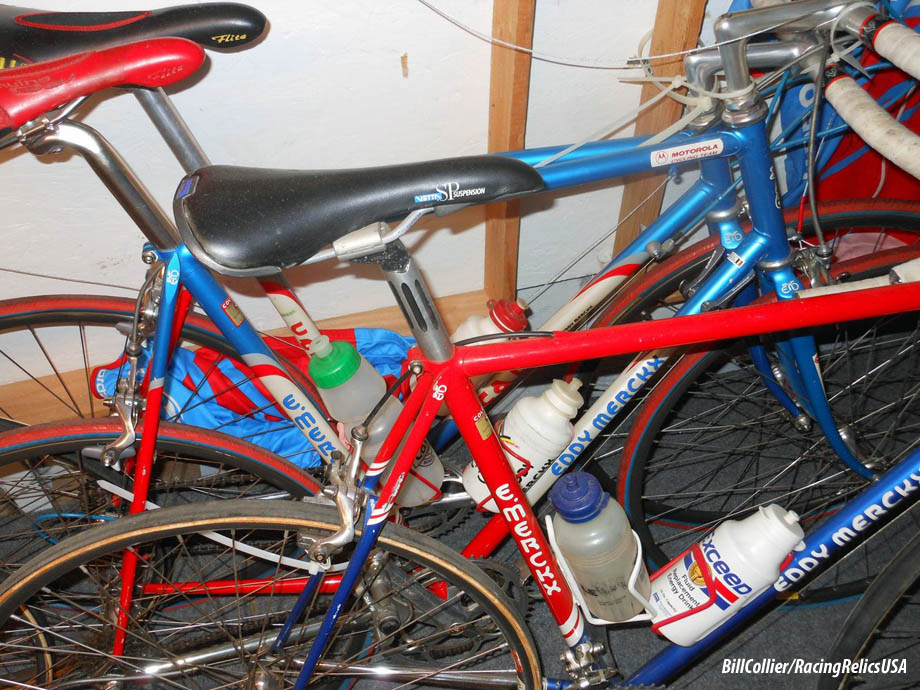 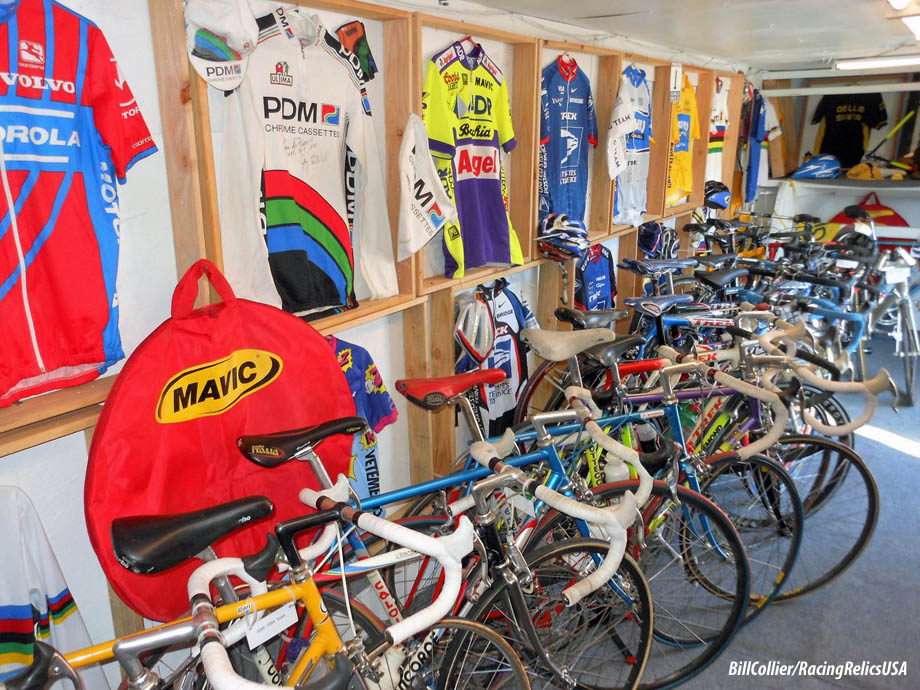 PEZ: How have you put the collection together and when did you start?
I was one of the sponsors of Team Shaklee in the era of 1989-1991, but before that my bike shop (The Bicycle Mart) had Team Glendale, a women’s team which competed in the COOR’S Classic and Tour of Texas 1987. Meeting riders throughout the years and with ultimately starting a collection in mind, I bought what I could afford. 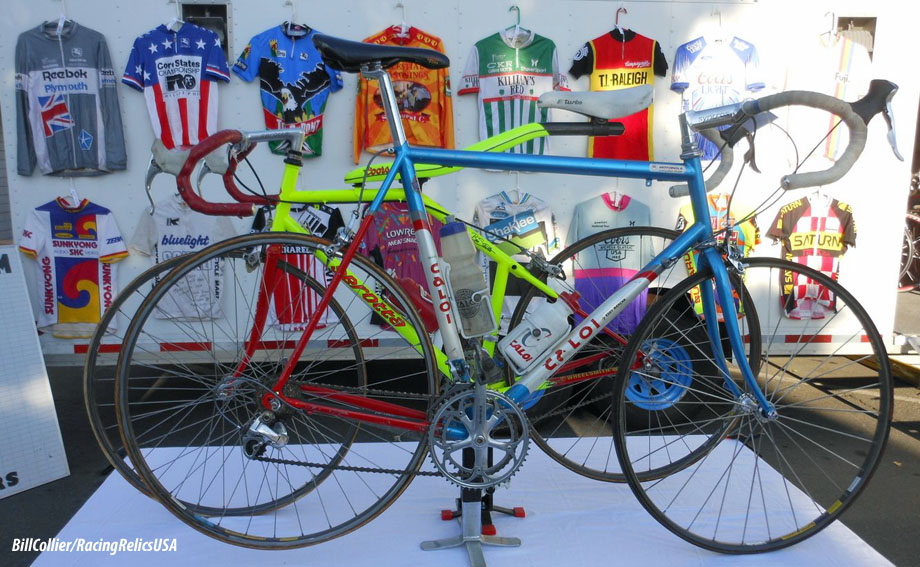 PEZ: What’s your favorite exhibit?
Probably my favorite would be my Roland Della Santa, – he built many of Greg Lemond’s frames – then the 1860’s all wooden bikes – a boneshaker and penny farthings; Greg LeMond’s machine; Lance Armstrong’s bike; Kent Bostick’s Z Team frame (which has never been built up); a pearl white Eddy Merckx 753 with C-Record Campy; Rebecca Twigg’s pursuit bike and Bobby Jullich’s Caloi TT rig which he shared with Lance. 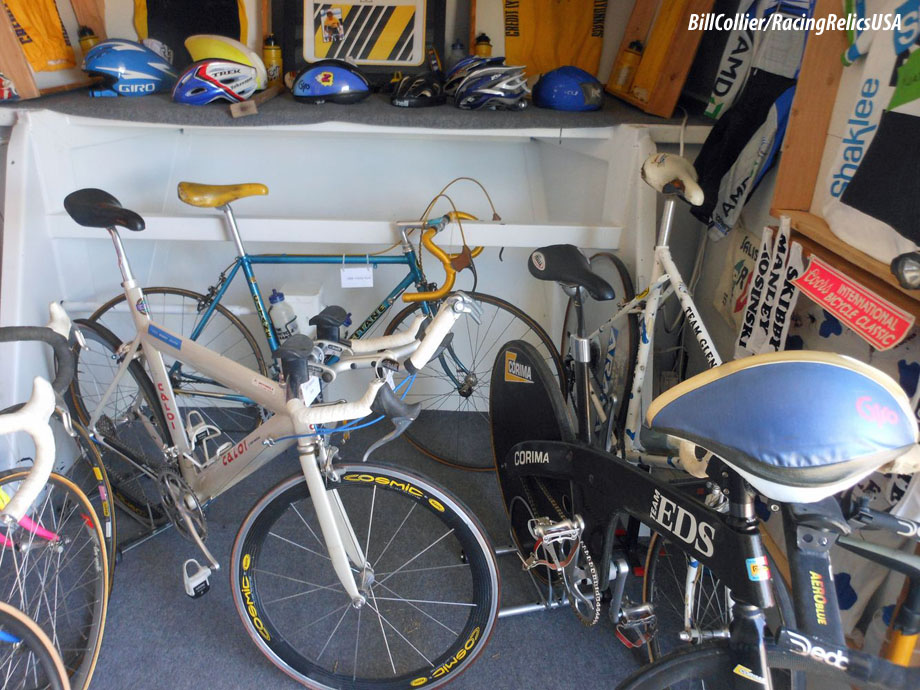 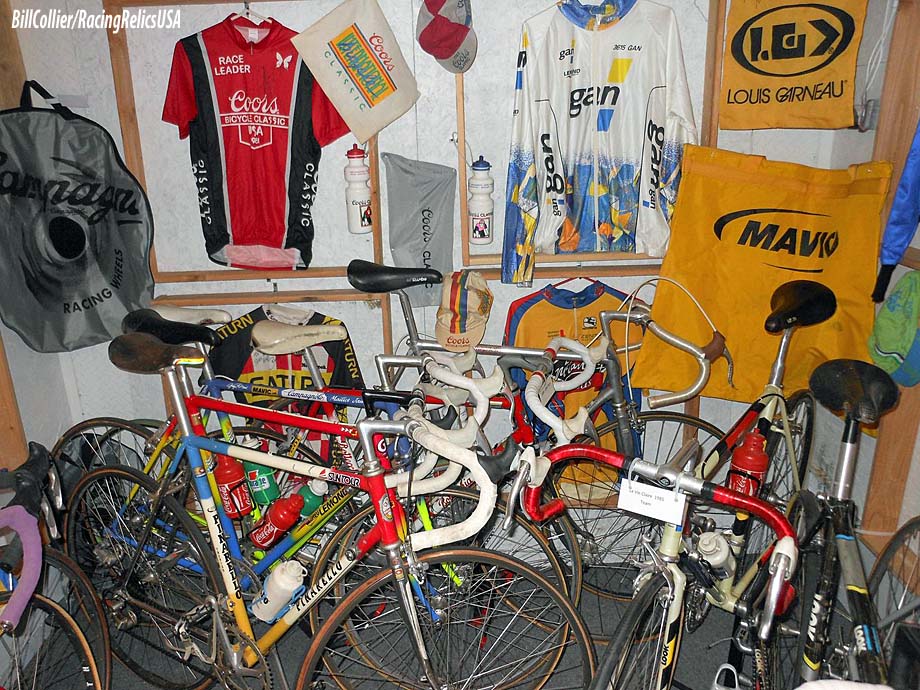 PEZ: Is it only about US riders’ bikes?
No, whilst the Racing Relics USA are mainly United States machines there are Eddy Merckx, Peugeot, Robert Millar’s Z bike and other bikes from around the world. 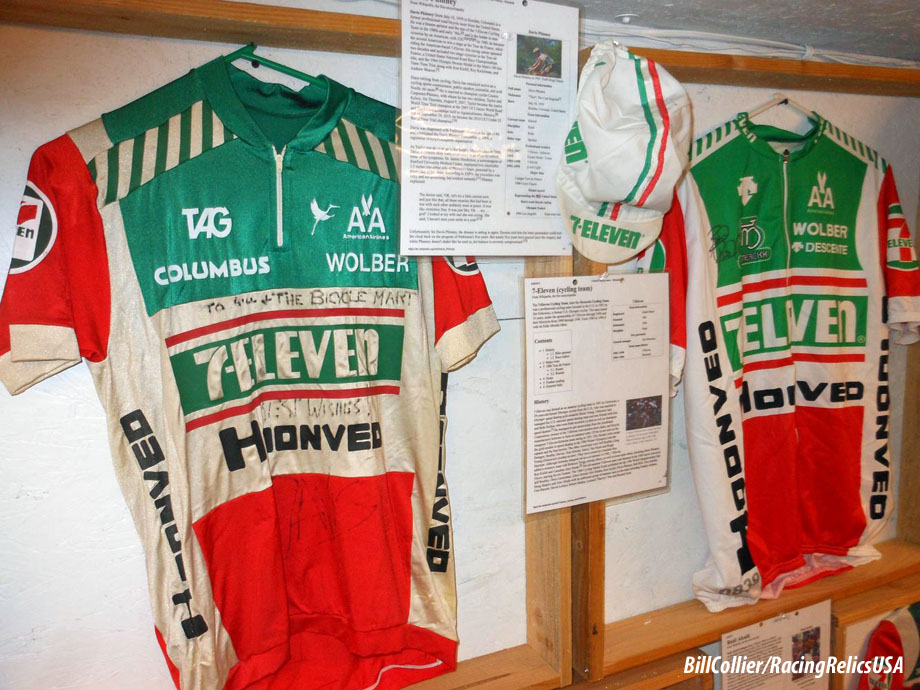 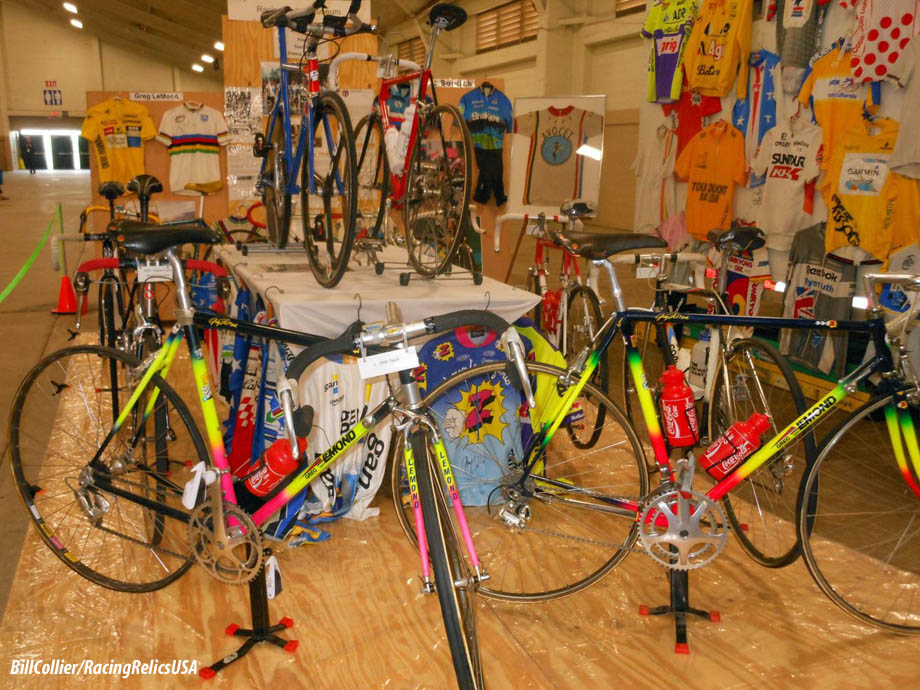 PEZ: How do you choose venues to display at?
I’m trying to get noticed at the larger venues where people can see the display. Pro races as well as Grand Fondo and Century rides that don’t want me to pay to be there, it take at least a 20’ x 50’ space. The money comes out of my pocket, the last few years I’ve spent too much just because of my passion for cycling. All the time I’m hoping for a sponsor from a bicycle manufacturer or somewhere outside the industry but that’s into cycling. I can only go to a few shows this year but eventually I’d like to display the whole cycling season. 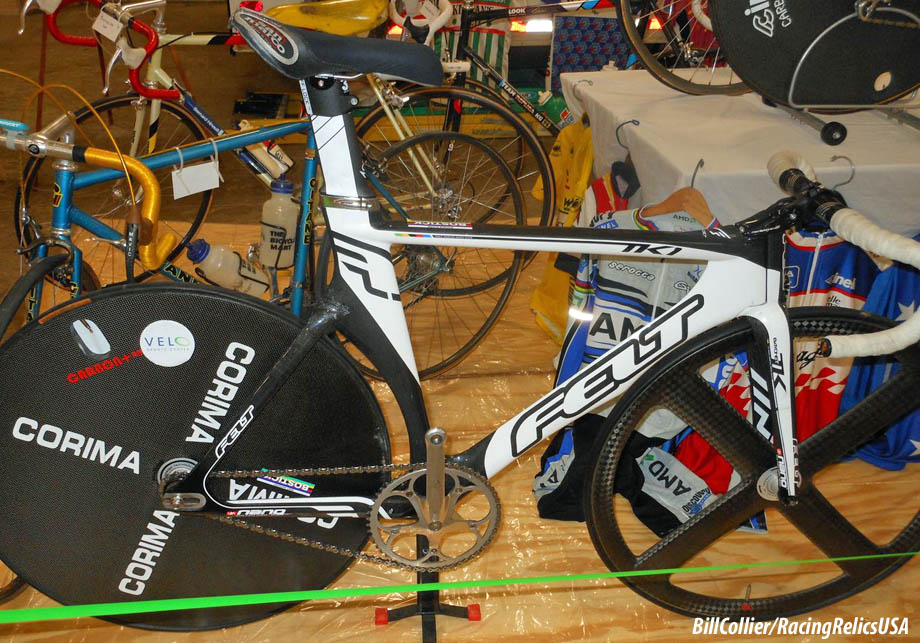 PEZ: Do you find former champions receptive to your approaches about provenance and authenticity?
So far I have found them to be the most enjoyable people to deal with; they love seeing their stuff or team stuff displayed. They want to have pictures with me and the display items because they haven’t seen it since there were on the team. And at the recent CABDA bike show in Del Mar, California, we received a lot of compliments from fans there. There were people there who saw it on line and drove down for hours to see the exhibit then posted pictures of it on line. Their comments included; ‘thanks for this;’ – ‘best thing at the show;’ – ‘thank you for showing it’ – ‘I will never be able to see this anywhere else,’ those were nice to hear. 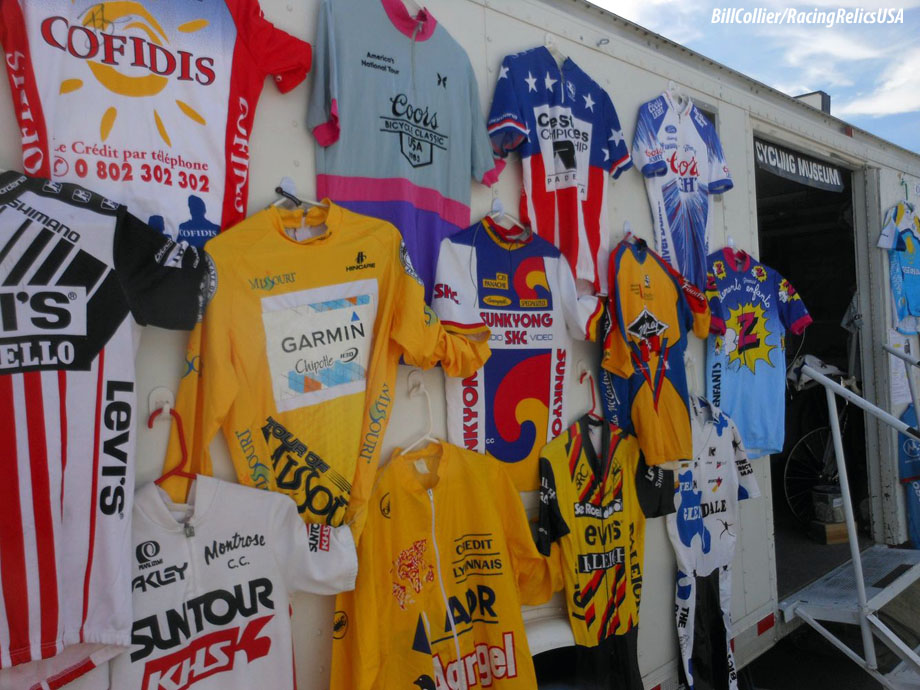 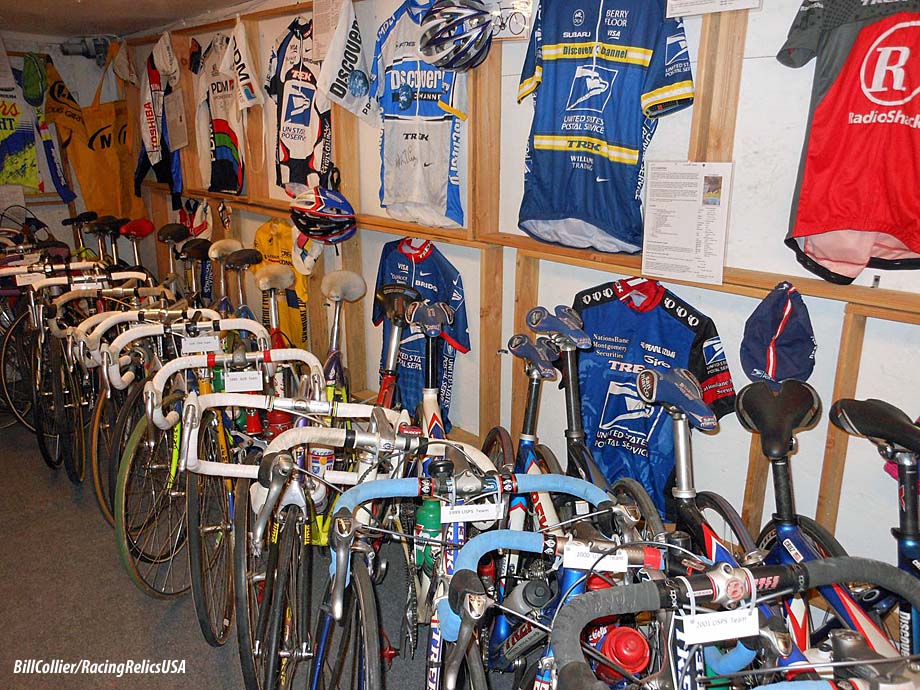 PEZ: Which is your favorite era?
From 1980 onwards – it was the easy for me at the time, enjoying cycling, being involved with riders and staff, and of course, having the shop. 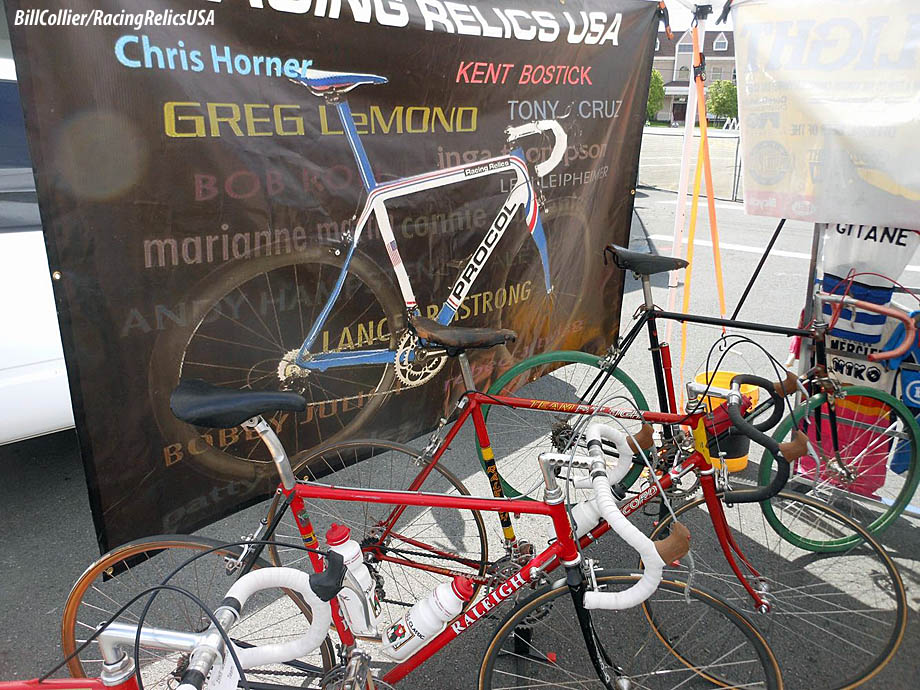 PEZ: When do you do your first exhibition?
At the Tony Cruz Grand Fondo in Long Beach, California and most recently the CABDA EXPO, San Diego/Del Mar California. 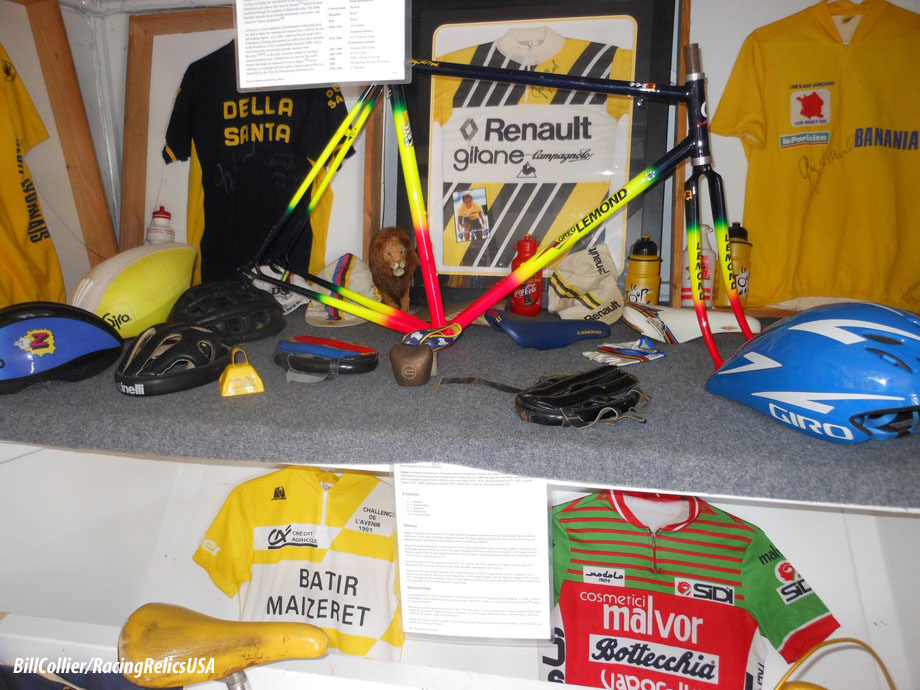 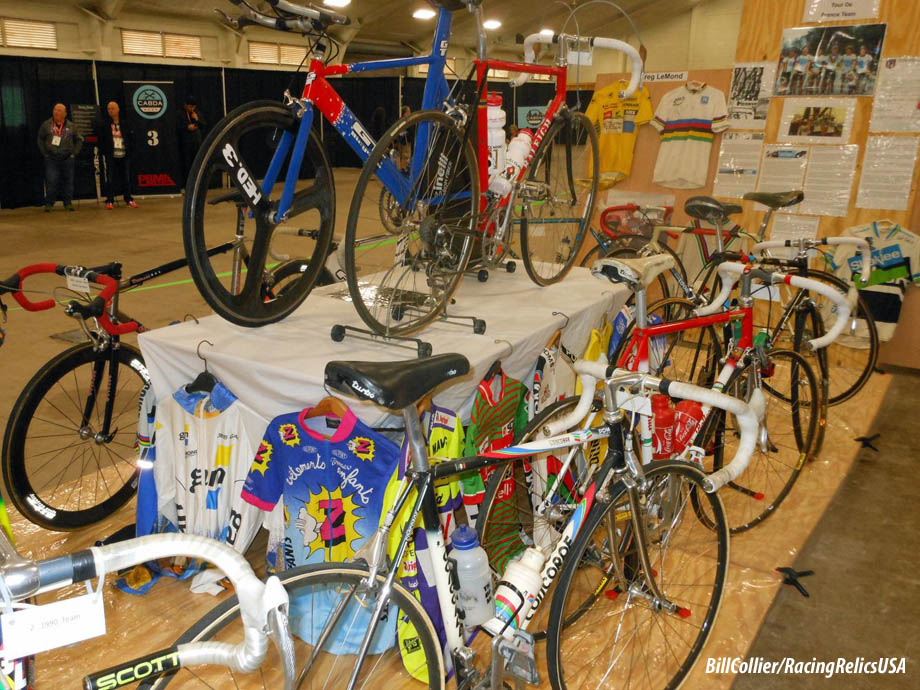 PEZ: Greg Lemond is the man who first made US Cycling ‘explode’ – do you have any of his machines?
Yes, I have a few of Greg’s bikes. With his bikes and those of other pros you see rider names written on them with felt pen, fingernail polish, paint – what’s cool is that riders have e-mailed me and said; ‘yes, that was my bike.’ 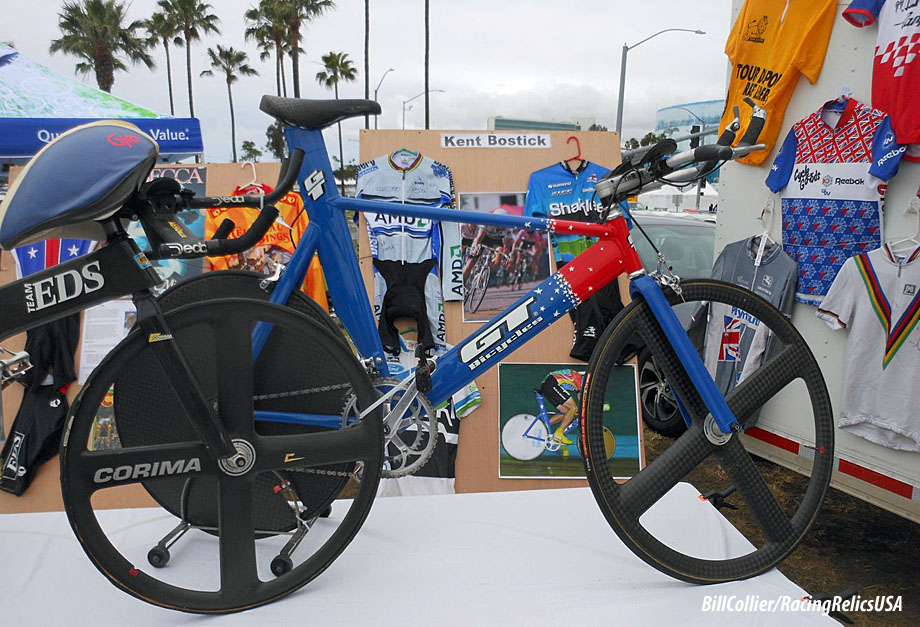 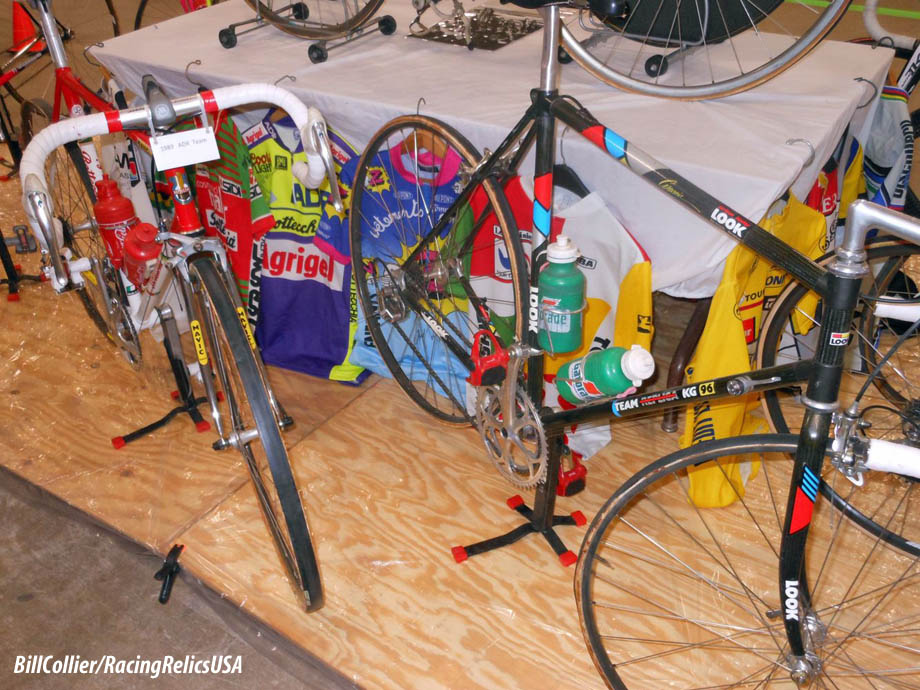 PEZ: How can folks catch up with the exhibitions?
Check out the Racing Relics website and Facebook page. And it would be great if you do see one of our shows if you could tell all your friends about it and don’t forget the guys down the local bike shop! 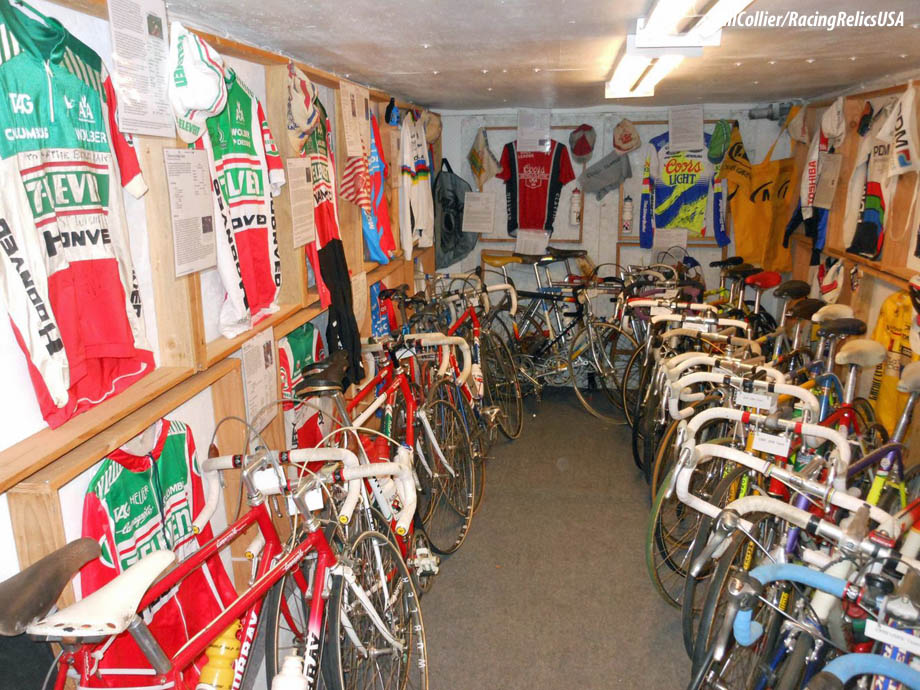 # Nice to speak to a man with such a passion for bicycles – our kinda guy! # 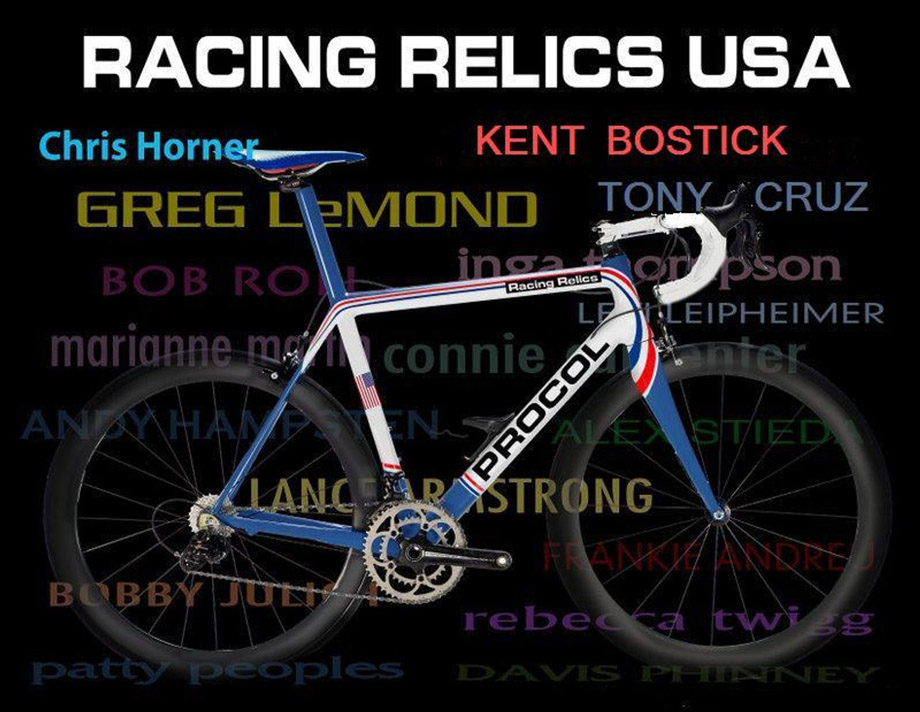