The RadioShack team has been through a few tricky times recently, the fall-out from the Armstrong affair, the departure of Johan Bruyneel, the loss of some of their sponsors and Frдnk Schleck’s positive control at the Tour de France. But there is an up-beat and happy atmosphere about the new metamorphosed 2013 RadioShack-Leopard team. Here is the presentation…

The Argos-Shimano team launch, just up the road in Altea Hills, was very nice and a fairly relaxed affair, but with recent goings on at the RadioShack team I was unsure what the feeling might be at their team presentation in Albir. As it turned out, everyone was much more up-beat than last year and the humour of the Schleck brothers seems to have permeated throughout. 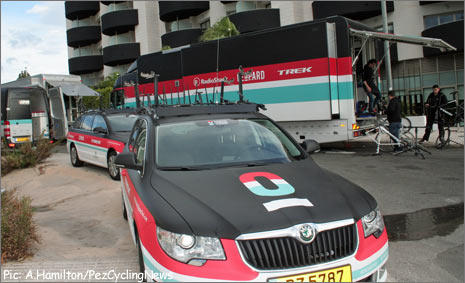 It’s always easy to find team hotels with all the cars and trucks on the doorstep, of course the big change was there were no Nissan vehicles due to the Japanese company parting company with the team, Skoda must have had those team cars delivered and painted very quickly. It’s hard to think of many teams that don’t use Skoda these days.

Inside the Albir Playa hotel the journalists and TV crews were setting up in one of the downstairs function suites. Last time I was here it was to interview Lotto Belisol’s Jurgen Van Den Broeck at the 2011 Vuelta a Espaсa which started in Benidorm, I was the only one there who didn’t speak Flemish which wasn’t the best arrangement. 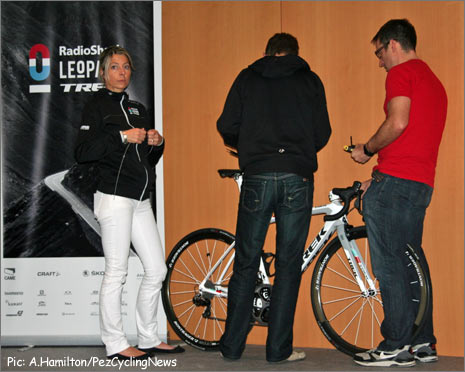 Things were coming together with banners, a projection screen and a Trek bike that didn’t want to stay at the right angle, but Giada Vicarelli di Saluzzo (that’s her in white trousers) had it all under control as did Tim Vanderjeugd from the press office who was leading the reseedings, Philippe Maertens, the other team press officer, was in Australia for the Tour Down Under. At this point the most important thing for me was the coffee, fresh orange juice and the nice cakes laid out for us. There was more to report on the food front later. 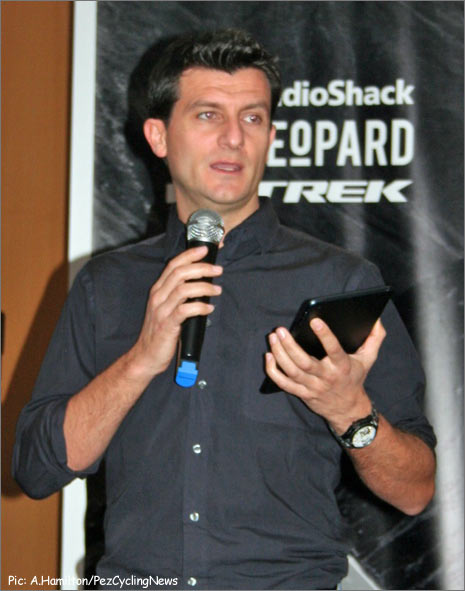 After the first introductions from Tim, it was down to the man who took over the general manager position from Johan Bruyneel last year; Luca Guercilena. He first introduced the Leopard-Trek development team that is under the manager ship of Adriano Baffi.

The older readers will know Baffi from his long and successful professional career from 1985 to 2002. All the young guys are keen to step up to a WorldTour team and this will be their big opportunity. 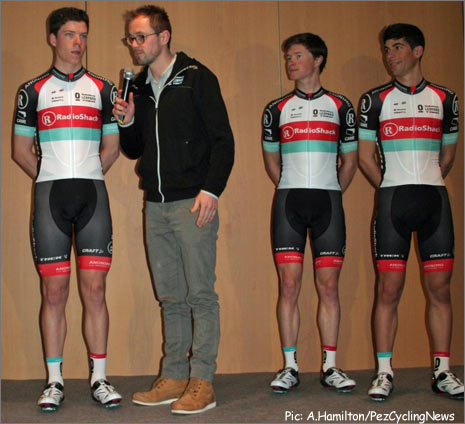 Onto the RadioShack-Leopard-Trek team for 2013, obviously the Tour Down Under riders were in Australia, but there was a surprise to come on that front. The riders were called up in groups with short interviews by Tim. Bob Jungles has moved up from last year’s development team, he was very excited and is “really looking forward to being with the big team.” His season starts in France with the Tour Mйditerranйen and the Haut Var, from there to Belgium for the experience. 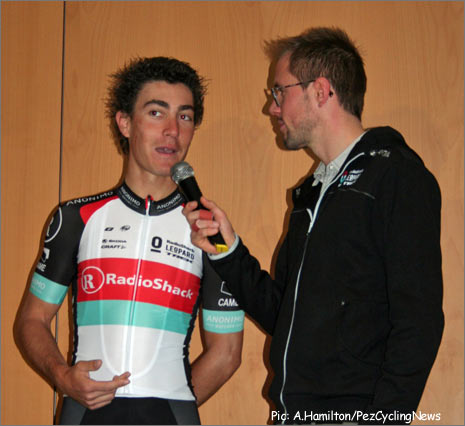 Next was the team’s sprinter; Giacomo Nizzolo, 2012 was his breakthrough year with a stage win and points jersey in the Eneco Tour and overall in the Tour de Wallonie. Is he ready to face guys like Griepel and Cavendish? “Ah, we will see. I’m working at it, but it is nice to be compared to them.” 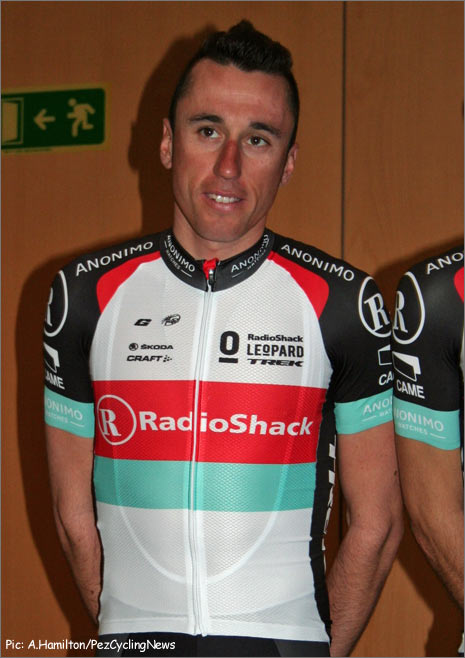 In the next batch was Croat; Robert Kiserlovsi who will be the RadioShack team leader at the Giro d’Italia this year, he is famous for crashing in Paris-Nice and sliding underneath a truck, all seen on television. For him the Giro is more beautiful than the Tour, “yea, when I was young I always looked at the Giro, of the Giro, Tour and Vuelta, the Giro for me is perfect, the racing there and everything.” 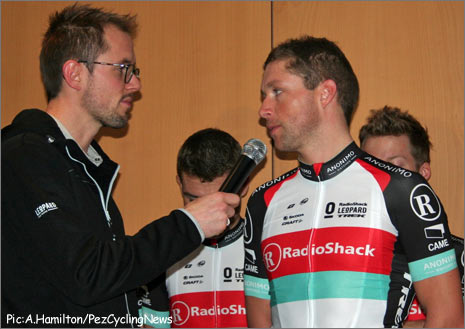 The next group had amongst them Classicsman; Stijn Devolder and Tony Gallopin. Devolder was looking forward to lining up with Fabian Cancellara at the Classics. Gallopin made a very funny comment about working with his DS uncle Alain Gallopin, “it’s OK, we are close, but he is my boss here…so maybe we are not so close.” 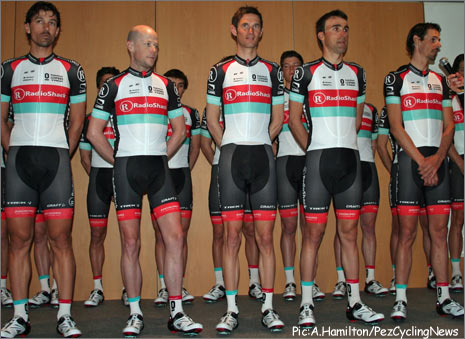 The leaders of the team were up next: Andreas Klцden is motivated for 2013, like every year. Haimar Zubeldia has got over his heart problem and is looking forward to the Tour de France and probably La Vuelta a Espaсa also. Frдnk Schleck was very happy with the work of new manager Luca Guercilena and that he is surrounded by a lot of experienced riders; “Chris (Horner) and Jens (Voigt), who is not here at the moment.” What about this season? “In general we are very strong and we want to go from the Ardennes Classics (talking for myself) to the Tour de France and the whole season we want to do well.” What about Andy in Australia? “I think he has some serious sunburn, he sent me a photo of his SRM after a training ride and they had 51єC, so it’s warm!” 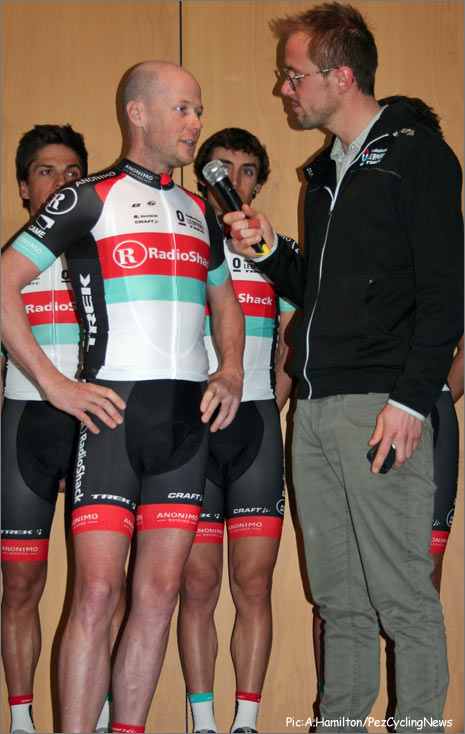 The most beautiful Jersey Chris?

Chris Horner, you have been around the longest, is this the most beautiful jersey you have ever seen in your life? “Absolutely!” How do you keep going? “I just love riding my bike, going out with the young guys. It’s a beautiful sport that can take you around the World.” More from Chris Horner when he gets PEZ’d. 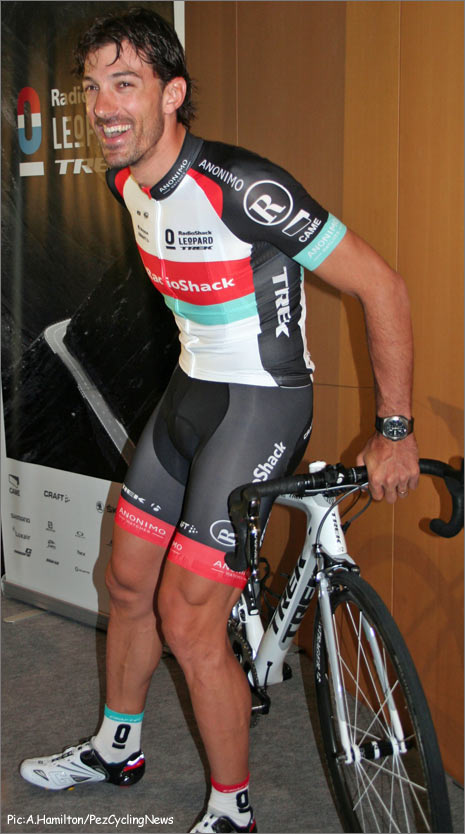 Fab on the bike again.

Has Fabian put last year behind him? “you have to recover mentally and physically, I’ve learnt a lot of things and made the negative into a positive.” How did you crash in Flanders last year? “I had one hand in the feed bag and the other on the handlebar and you see a bottle rolling back towards you and there is nothing more to do but to pray. I had the feeling something was not OK and then everything was over.” Can you improve? “Yes, but you have to be 100% ready to do that and ready to sacrifice yourself, plus we have the new flow of the team which is very important and I will come back 100%.” 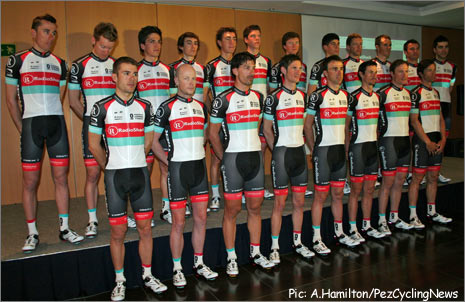 Time for the team photo before a Skype link to Andy Schleck in Australia. 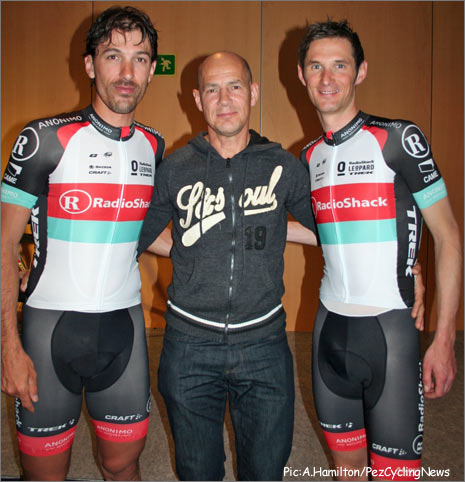 I did make a new friend at the presentation, ex-Pro from Holland now living in the area and working for a local Dutch language newspaper; Arnold van Hooft. Of course he wanted his photo taken with Fabian Cancellara and Frдnk Schleck, well you can’t say no. 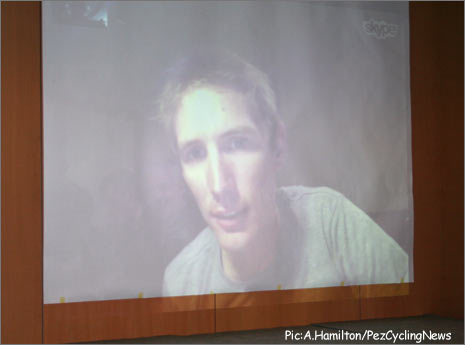 With the help of the internet we had a link to the Tour Down Under, they all had their new team T shirts, except Andy who was wearing a shirt with VELO printed on it. The link was the usual internet hit and miss affair, the hot weather and the training were the main subjects. All funny stuff with the time delay etc. but well worth the laugh and good to hear that he had seen kangaroo’s and koalas. Jens Voigt thinks this year’s Tour Down Under is the hardest so far. 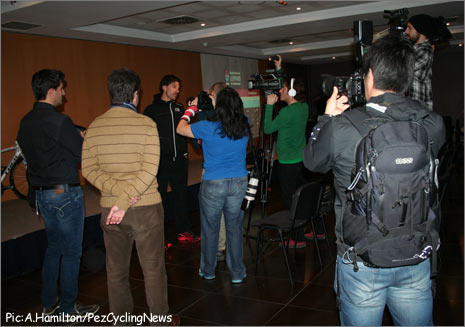 Time for interviews, Fabian and Chris Horner were the most popular, after talking to Chris Horner there was time for some Cava and a light buffet. 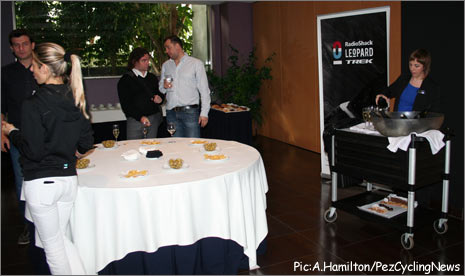 There was a little time to read Marca and catch up with the Armstrong/Winfrey show that had been on that morning at 3am, then lunch was served in the hotel restaurant. A nice spread was laid on and the teams chef was on hand; Kim Rokkjaer. I asked if this was an easier time of the season for him, but no, “this is a time of training for me too and getting everything sorted for the season ahead.” 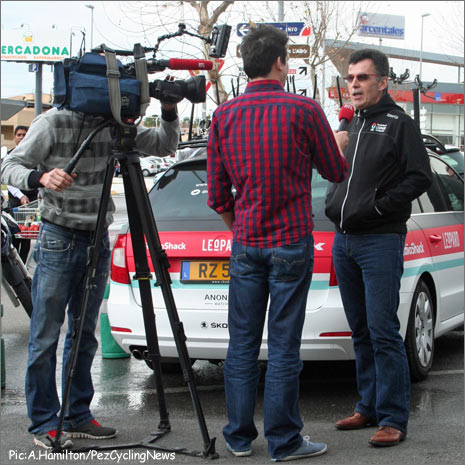 A light lunch and a chat with Giada Vicarelli di Saluzzo who handles sponsorship and marketing for the team. She is half Italian, half Danish and has moved to Luxemburg to work with the team. She was very happy to be in Spain to see the sun as there wasn’t much in northern Europe at the moment. 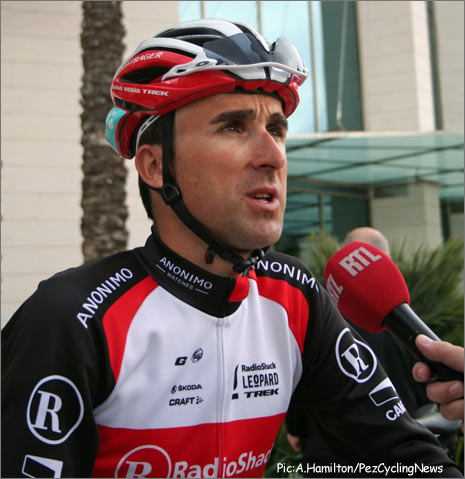 The two teams were not going for a proper ride, just up and down the local main road for photos, but there was a good opportunity to mix with the riders. Haimar Zubeldia was happy to chat as he always is. He is really looking forward to the Tour and thinks the course for the Vuelta with its eleven summit finishes is great for the riders and fans. 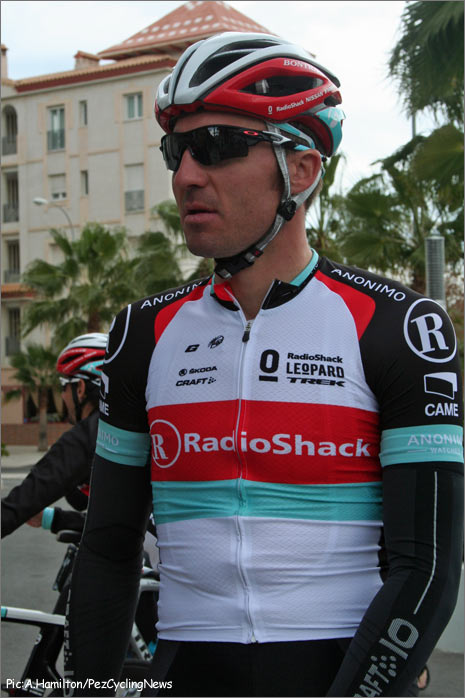 Yaroslav Popovych was looking thinner than when I saw him in December, but it’s best not to ask a cyclist that kind of question, just like you shouldn’t comment on a ladies weight or age. 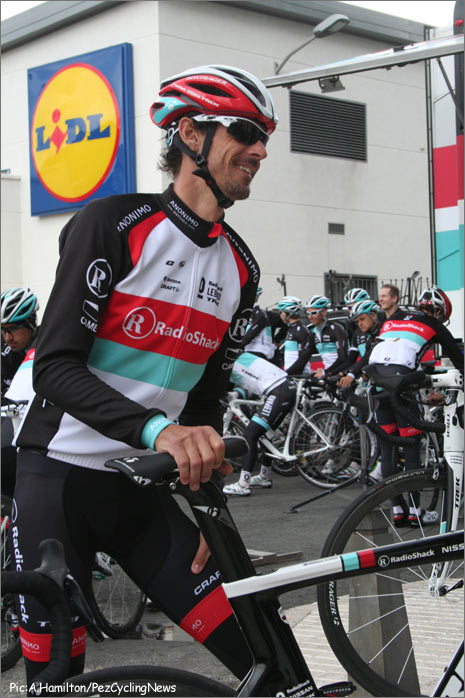 Andreas Klцden actually looked very happy, sometimes he isn’t the most communicative, how many interviews with him have you seen? Not many I’m sure, but he was laughing today. 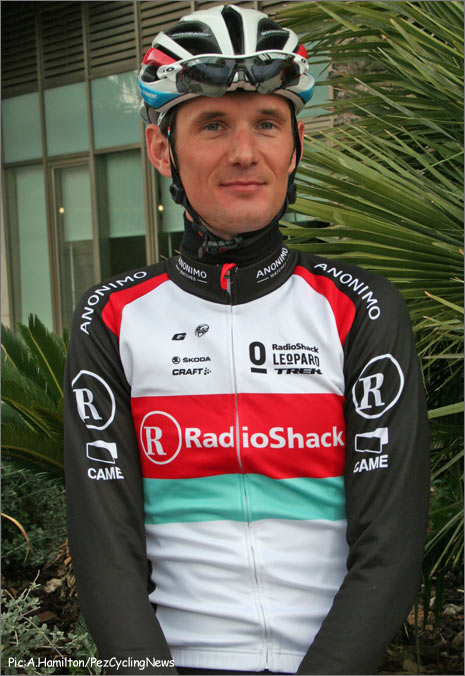 There wasn’t any mention of Frдnk Schleck’s problems and he seemed to be looking at the season as if he will be racing, but it could be a long time before we know for sure the outcome of his positive test during last year’s Tour. 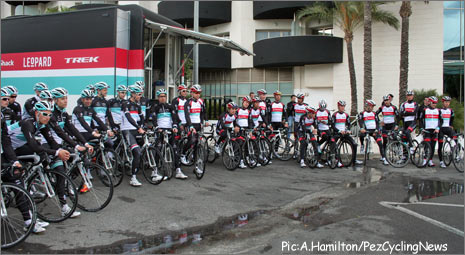 The Leopard-Trek and the RadioShack-Leopard-Trek team had a last photo line-up before hitting the road. There wasn’t much chance of a good photo or for the long line of traffic to pass, so a couple of quick shots and I could go home. 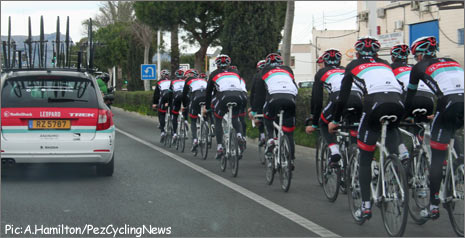 On the road at last.

As I turned off, the traffic police turned up on their moto’s with sirens wailing, I don’t know what happened, but I was glad to be going away from it. 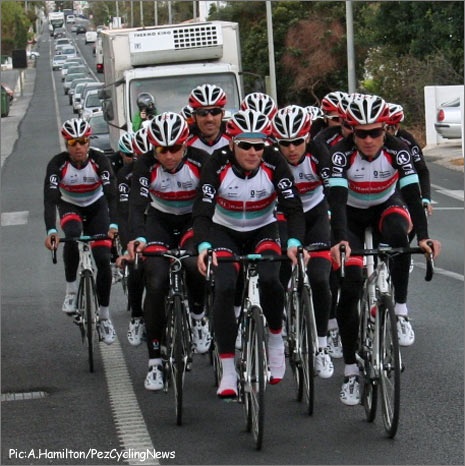 Bit of a tail back there!

The RadioShack presentation will probably be my last team visit for this training camp season, it has been the busiest pre-season I have known, but then this area of Spain is the best for weather, training roads and hotels, so it doesn’t come as a surprise that all the best teams are here. Good luck to them all, but then they have had the best preparation possible.