Rapha’s Guide to the Great Road Climbs of the Pyrenees

Those purveyors of road cycling finery at Rapha have just released their Guide to the Great Road Climbs of the Pyrenees by reknowned cycling journalist Graeme Fife. A handsome addition to any coffee table, you’ll find it hard to put down, and may even take it with you as your road guide to these mythical climbs of southern France.

Every cyclist dreams of Cyclotopia: the perfect place to ride. The details vary depending on the imagination, but the challenging roads are lightly travelled and take the rider through dramatic landscapes where fascinating locals, who love bicycles, live in villages which casually bear the weight of an exotic history. There is a cozy bar or cafй at the end where the day’s epic ride, with only a few colourful exaggerations, can be relived with friends. The Rapha Guide to the Great Road Climbs of the Pyrenees by Graeme Fife is the key that opens the gate to Cyclotopia. Except that the places in it are all real. 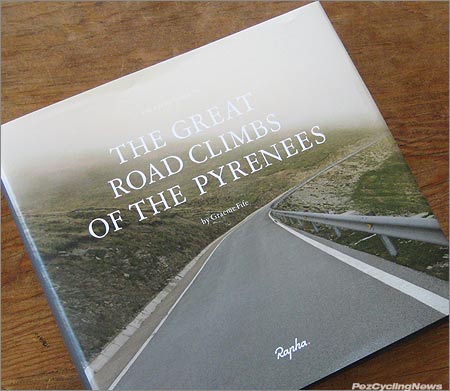 Graeme Fife has written extensively on professional bicycle racing, and his deep knowledge of the sport, coupled with an eccentric style, makes him the ideal partner for Rapha Racing, a well-known purveyor of high-quality, retro cycling gear and publisher of this beautiful and not inexpensive book. The Introduction truthfully declares “This is not a conventional guide book.”

Compliments must go to the designers of the book, which is not a huge coffee table art book but feels like one. Its 320-odd pages are printed on gorgeous cream paper, its elegiac photos (by Pete Drinkell) are muted and calming, its maps look drawn by hand (probably with a fountain pen)– it even smells good! My copy came in a big black box, wrapped in the tissue-y pink pages of a faux Gazzetto dello Sport. Rapha’s clothing is as much about style as it is function, so it is understandable that they would want to be associated with this book, some 2 Ѕ years in the making.

Indeed, this is literature:
Rapha’s guide to the Pyrenees is firmly rooted in two things: firstly, exalting the love of and passion for the beautiful machine together with the whole gamut of feelings it excites, from the zenith of joy to the nadir of fatigue and, yes, not uncommonly, the spontaneous resentment at which the wretched bike has put you through on a particular day; and secondly, celebrating the terrain which has so often been the ultimate duelling ground of the Tour de France since the Pyrenees were first included in 1910. 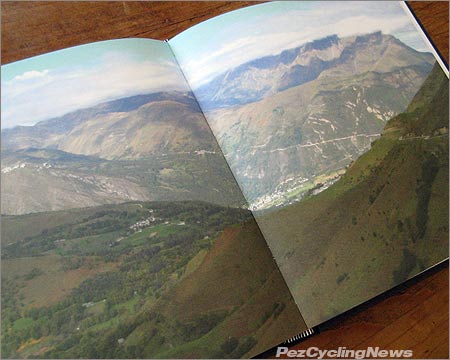 This range stretches 384 kms from the Atlantic to the Mediterranean and is between 96 and 128 km broad. There are unusual characteristics to Pyrenean scenery, such as an absence of lakes, and dead-end walls known as cirques at the upper end of the valleys, as well as a general rarity of passes, and their extreme height. The Celts, Hannibal and his elephants, the Romans, the Visigoths, the Moors and the Franks—all passed here. Here too was the 19th Century Spanish war of resistance against Napoleon and the Civil War of the 1930s, and even today Basque separatists walk the smugglers’ paths.

As for useful advice on climbing, there is some but “No-one can ride the mountains for you and the best you can hope for is that someone who has ridden them will encourage you to do so.” All the cols (passes) in the book are over 1000 m in altitude and it is a tribute to the author’s enthusiasm that the assiduous reader will take as much pleasure from reading accounts of climbing the unknown Col Xatard or the Cirque de Troumouse as from the celebrated Tourmalet. And this will take a while: there are 103 cols described in the book. 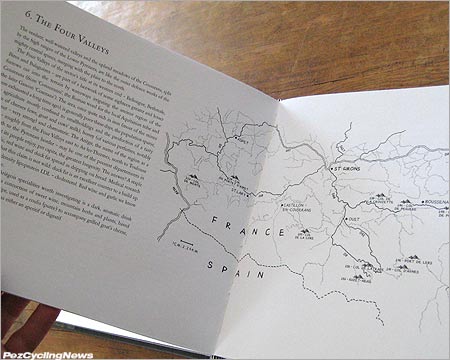 The author has divided the Pyrenees into chunks, with chapters corresponding to the eight distinctive sectors: Iskuara, the Pays de Sault, the Coserans, the legendary Circle of Death, the Bear’s Jaw, Wild Peak, Lost Mountain and Judgement Mountain (the last four named after particular peaks). Each sector gets a general description, with a map showing all the cols and their corresponding page number, and a series of photographs which, like a good deal of the eccentric text, have a dreamlike quality to them. The Pyrenees have a remarkable network of beautiful serpentine roads but apparently no people whatsoever. There is at least one friendly-looking goat.

Each climb has a profile, also hand-drawn, and a blow-by-blow description of the road—its gradient, surface qualities, the vista beyond. Mr. Fife diverts the reader: “Black cherries are a speciality and the little town of Itxassou is famous for them,” or comments on the types of sheep grazing the hillside, interspersed with a quotation or two from Ivanhoe. He also clearly enjoys the food. 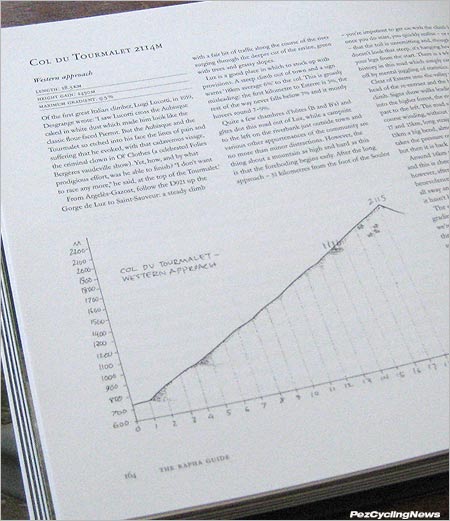 In realizing the second goal of the book, the linkage with the Tour de France, the author has included stories of Tour incidents on the cols, with names–Merckx, Fignon, Vietto, Ocaсa, Anquetil, Armstrong, Indurain—of those who became famous on these climbs.

The book is probably too heavy to take with you on a trip but if you are a cyclist and love the mountains and care for great books, the Rapha Guide to the Great Road Climbs of the Pyrenees belongs on your shelf. As Christopher Morley wrote: “The bicycle, the bicycle surely, should always be the vehicle of novelists and poets” and this book is a cyclist’s love poem to the Pyrenees.

Rapha’s Guide to the Great Road Climbs of the Pyrenees
by Graeme Fife
Photos by Pete Drinkell
Rapha Racing Limited, 2008

About The Reviewer: Leslie Reissner cycled across the Pyrenees on his way to Santiago de Compostela and. as an accredited pilgrim he is entitled to a reduced waiting time in Purgatory before ascending to Heaven. Until then, he may be found at www.tindonkey.com.