Remembering Laurent Fignon: As Julian Alaphilippe prepares to defend his maillot jaune in the first mountain stage of le Tour, it’s 10 years since we lost another man who not only wore that beautiful jersey but won it outright twice in 1983 and 1984. Monsieur Laurent Fignon. 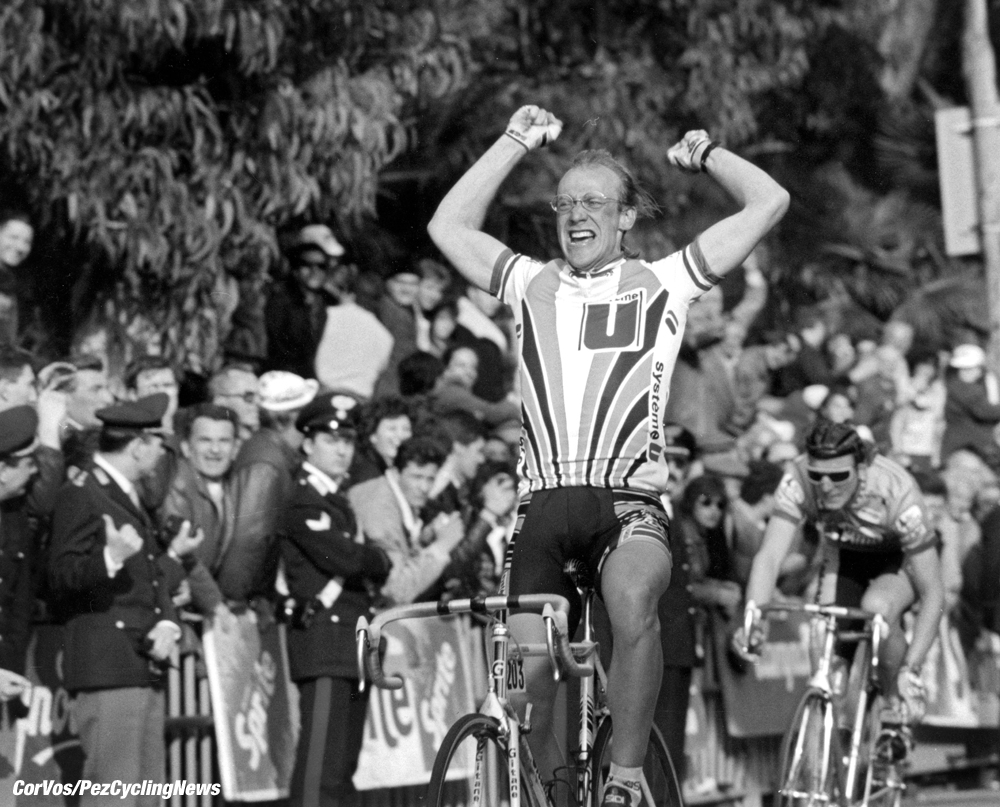 ‘Unluckiest man of the race was Laurent Fignon (Renault) who escaped alone on the climb of the Cote de la Madelaine, only to crash when leading by 37 seconds with only 18 kilometres to go.’ That was how Britain’s Cycling Weekly magazine recorded my first ever memory of the man; cycling on British TV was rare back then but those producers know a good image when they saw one and I must have seen that footage of the Frenchman’s bottom bracket axle breaking and catapulting him over the ‘bars to end up sitting on the tarmac a hundred times.

The race was Blois-Chaville 1982 – one of the incarnations of Paris-Tours – and the winner was Jean Luc Vandenbroucke, uncle of the late, great Frank Vandenbroucke. And it’s with sadness that we record the passing of another great, the man who landed on the tarmac that October day and who, not for the last time would sit stunned at the end of a race which should have ended in triumph for him – Laurent Fignon. 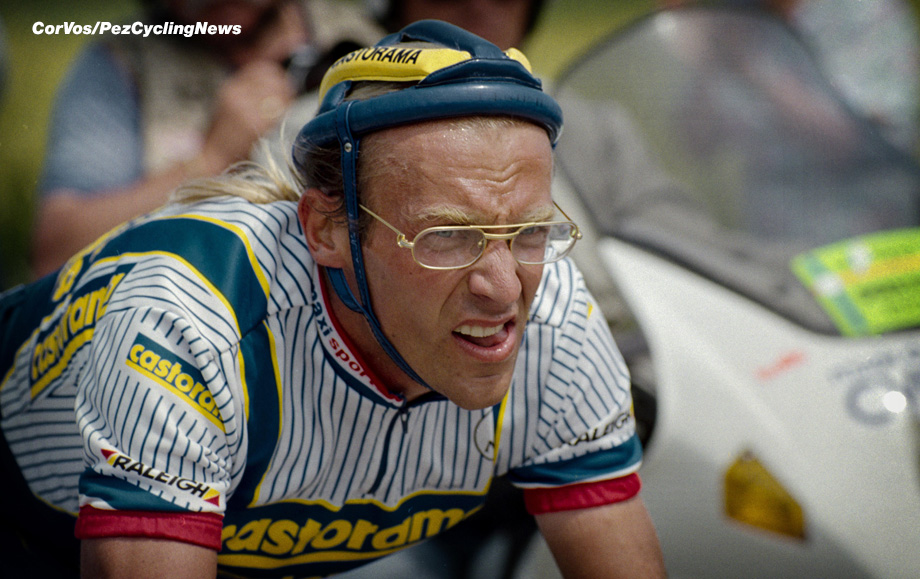 In those days before the internet it was hard to get continental race results but if I had been paying attention, beneath the Cycling Weekly headline that read ‘Yates seventh in Cannes despite crash,’ back in March of that year, I’d have observed that Fignon had wasted little time in grabbing his first pro win – and yes, it was former Sky DS Sean Yates taking that seventh spot. And by the end of that month, the headlines were reading ‘French find another star’ as the 21 year-old held off no less than Sean Kelly to win the Criterium International. 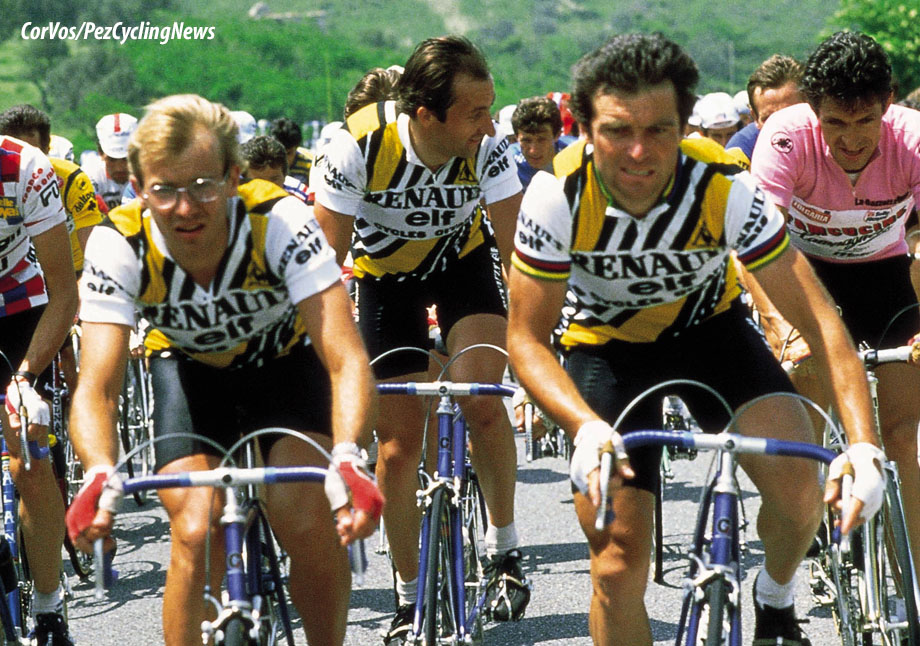 In the Giro d’Italia alongside Bernard Hinault

If his first year as a pro was good, his second was spectacular with stage wins in Tirreno, Tour d’Armorique, Tour du Limousin, Criterium International and the Vuelta dwarfed by his winning the Tour de France at his first attempt at the age of 22 – all French riders must have a nick name, usually preposterous – but ‘le professeur‘ did indeed seem appropriate for the Parisian with the round, gold rimmed spectacles. 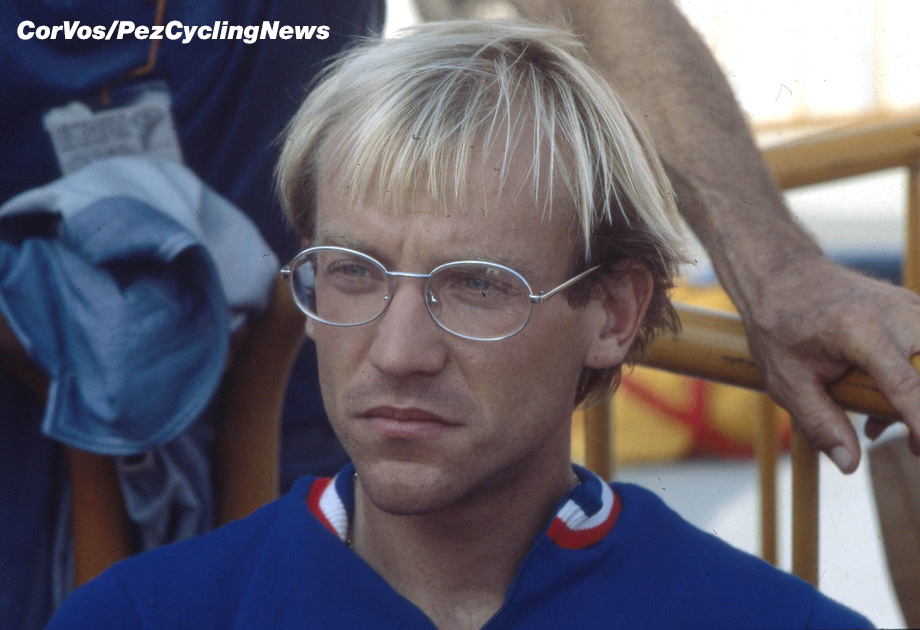 The following year he dominated the ‘84 Tour after taking second in the Giro – behind a rejuvenated Moser after the hardest mountains stage of the race was cancelled due to ‘bad weather’ or Fignon being a much better climber than Moser, the correct choice depending on which side of the Alps you live on – and winning the French pro road championships. 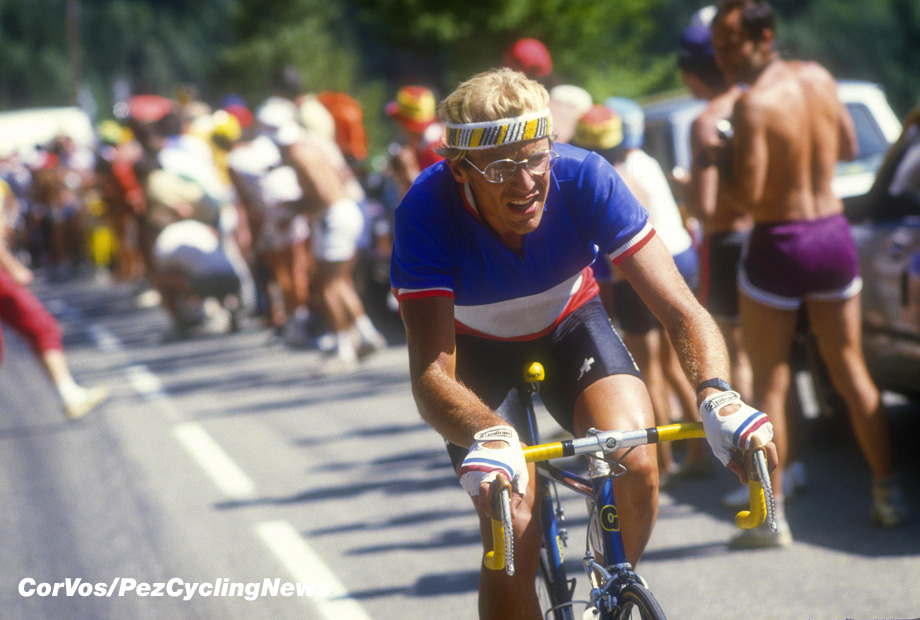 The years that followed were leaner, due to the illness and injury which dogged his career; 1985 saw the Coppi-Bartali as his best win. The 1986 Flèche–Wallonne, a Dauphine stage and the TTT in the Tour would mean a good season for most riders but it wasn’t a great year by his exacting standards. In 1987 there were stage wins in the Tours of the Netherlands, Luxembourg and Spain with home stage wins too in Paris-Nice and le Tour; but seventh on GC was of no use to Fignon.
A brilliant solo win in Milan-Sanremo commenced his 1988 campaign but that was the high light, although he did win the Tour of the European Union. 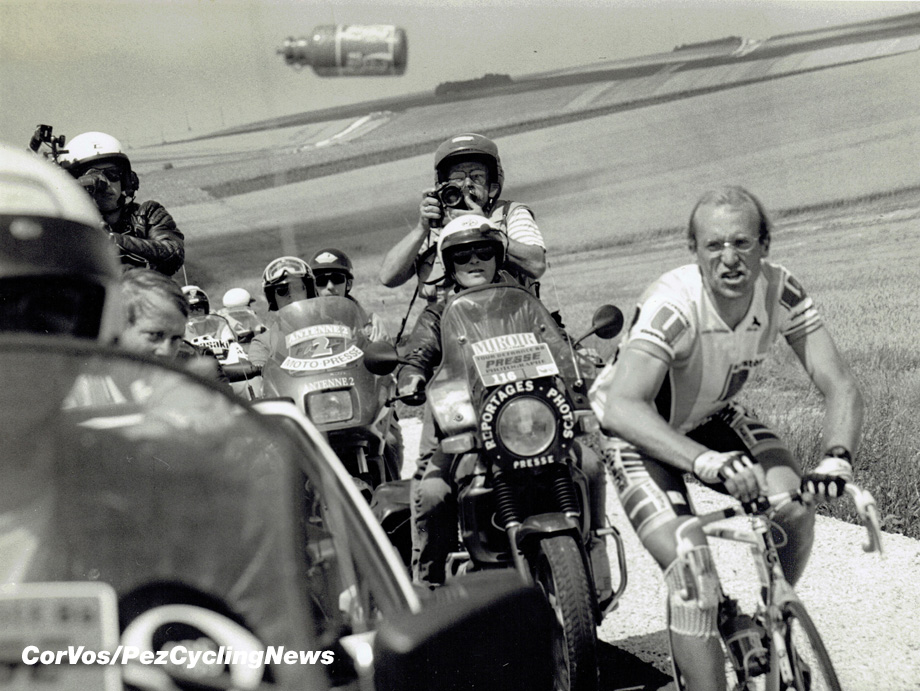 Less than pleased with the photographers

After being robbed a fair fight by the favouritism of the organisers in 1984, he returned to win the 1989 Giro. With wins in Milan-Sanremo, the Tour of the Netherlands and the Giro his 1989 season could hardly have started in better fashion and boded well for his hat trick of Tour wins. That last TT stage into Paris where Lemond clawed back a deficit of 50 seconds and put a further eight seconds into the Frenchman to win has become the stuff of legend. Whilst much has been written about Fignon’s ‘failure’ it should be remembered that some 31 years later, Lemond’s 54.545 kph average still stands as the Tour’s fastest-ever time trial at a distance above 20 kilometres (Rohan Dennis’s 2015 average of 55.446 kph was over 13.8 kilometres). 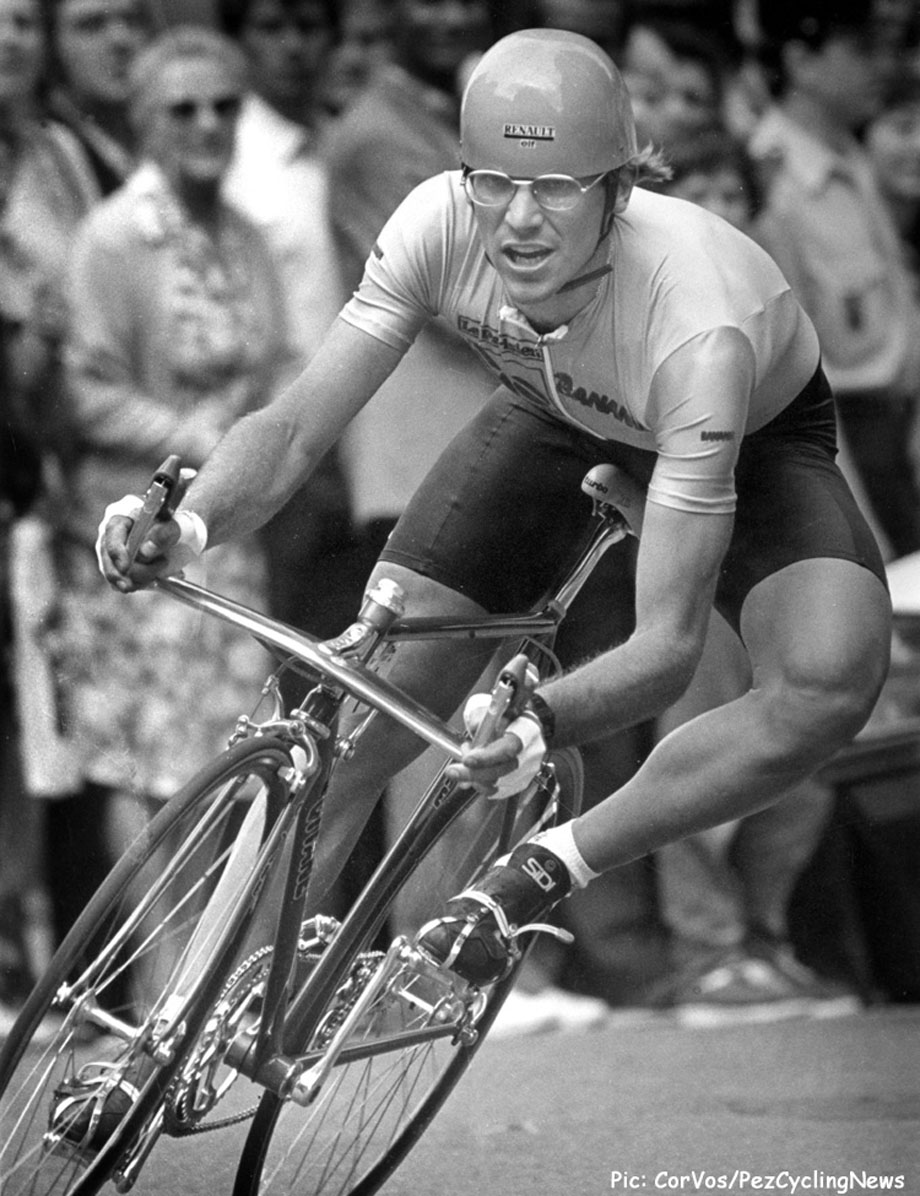 Not bad against the watch 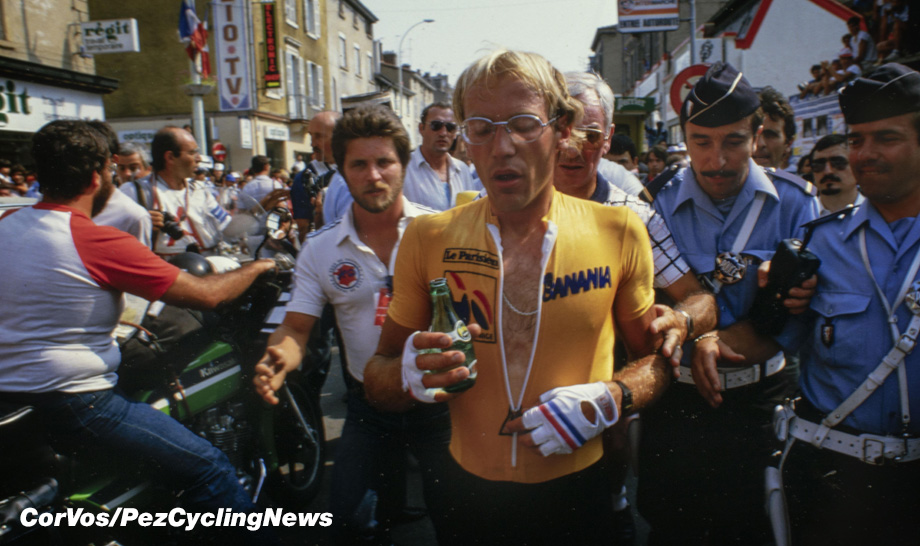 The argument has always been that after that Tour Fignon was a broken man; but the record books show that he won the Grand Prix des Nation individual time trial (the then equivalent of a world time trial championship) plus the Baracchi Trophy and Baden-Baden team trials with team mate Thierry Marie in the fall of 1989. 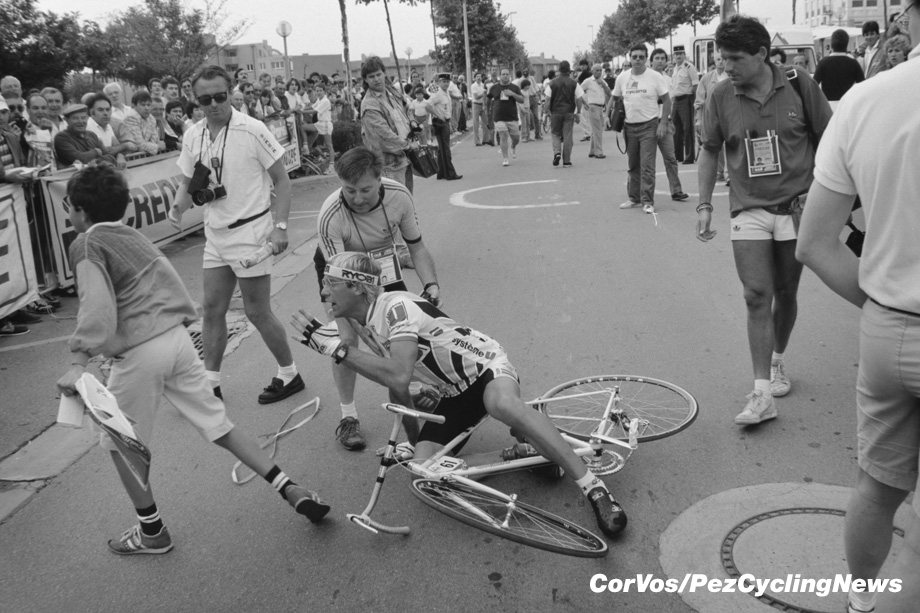 The Criterium International fell to him again in 1990, as did the Grenoble six day; but his best days were clearly behind him, albeit in 1991 he was sixth on GC in le Tour and pulled off his final Tour stage win in 1992 at Mulhouse in the colours of the Italian squadra Gatorade after ten years with the Renault/Systeme U/Castorama dynasty. The end of the line came in 1993 with a final win – to take his career total to near 100 – in the unlikely Tour of Mexico. 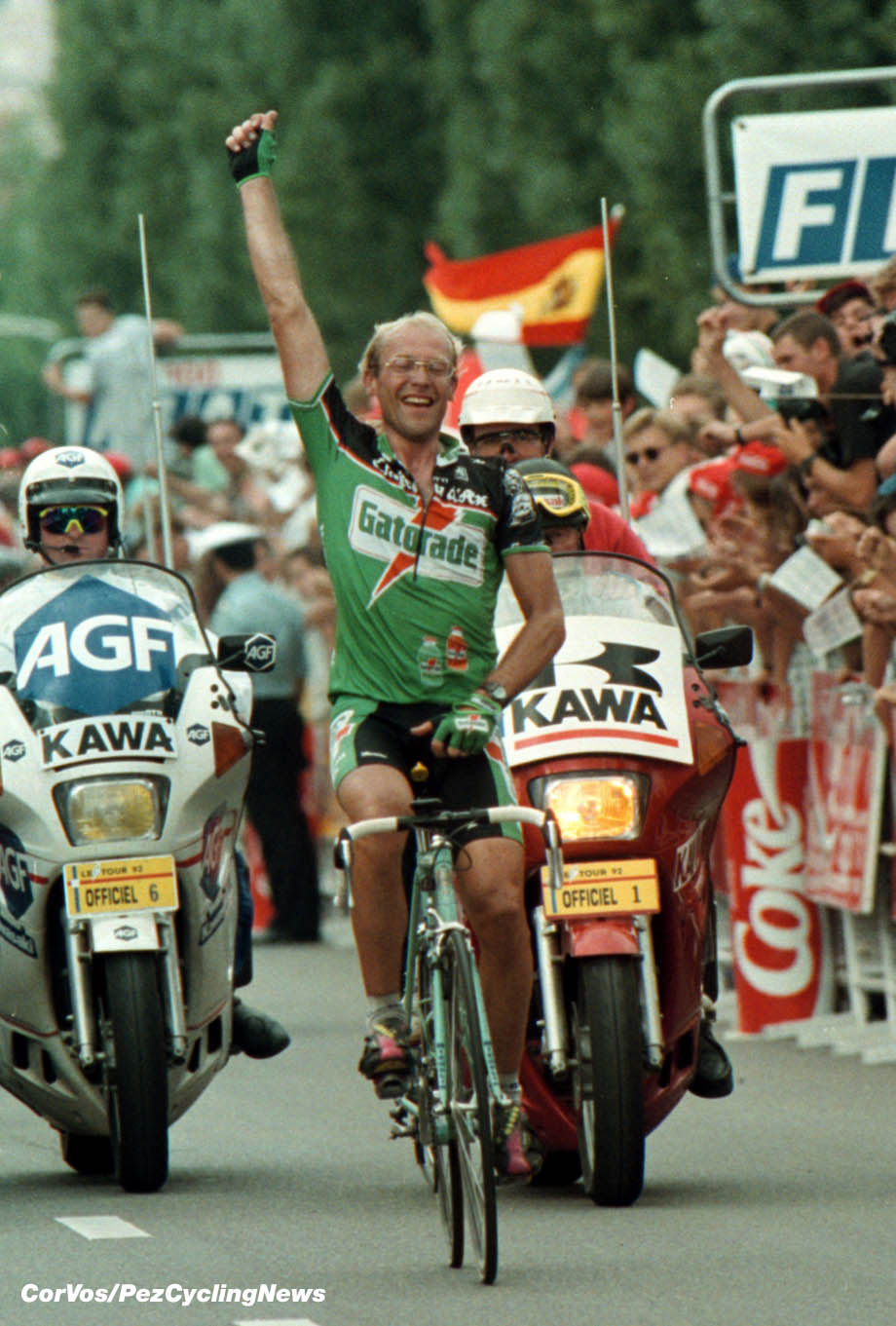 After his career as a rider finished he took on various roles; race organiser, bike tour operator – and the one for which he was best known and loved, that of TV race commentator.
A role he performed, gravel voiced to near the end of his life, through the 2010 Tour. My final memories of the man are eclectic, like the man himself. The 1990 Escalada a Montjuich hill climb in Barcelona and Fignon is riding back down the hill after his warm up, a gang of tough looking local thugs are pointing at Fignon and poking fun at his pig tail in bad French; he switches across the road, brakes, fixes them with a stare and spits spectacularly at their feet – the ‘hard men’ fall silent as Fignon sneers at them and lets the brakes off to freewheel back to his team car. 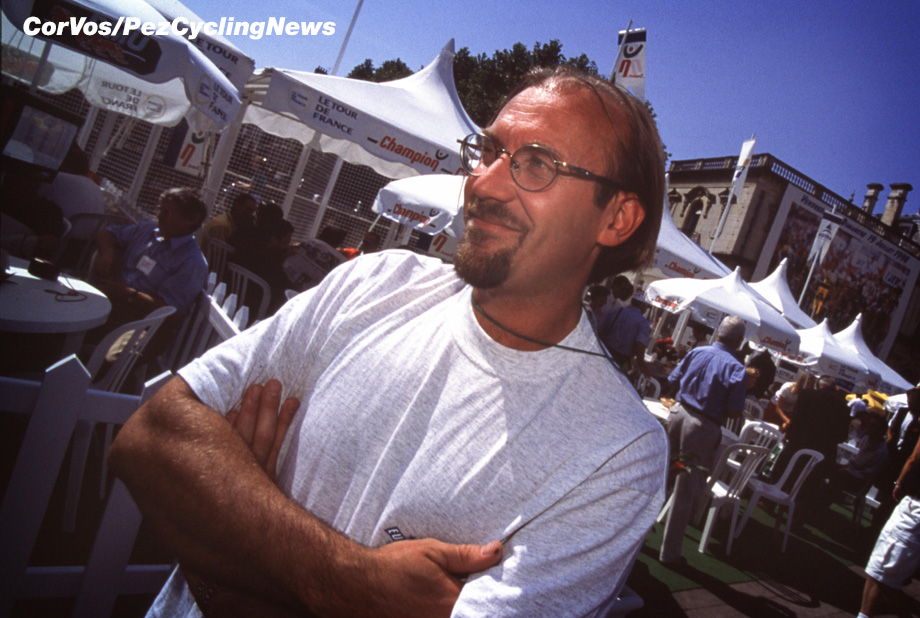 Some years ago Cycling Weekly magazine decided to do a full colour feature interview with the man and he was allowed to pick the venue – the legendary Cafe de Flore in Paris, hang out of Hemingway and Sartre. How appropriate for a ‘professeur.’ 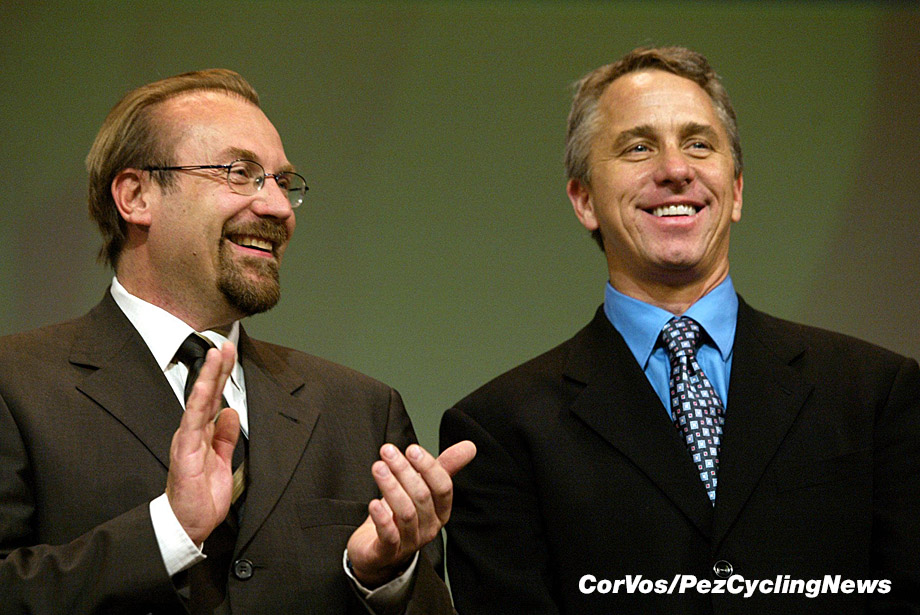