Gerben Karstens Obituary: We learnt with sadness the passing of Gerben Karstens in October. Karstens was not only a winner of many races – Stages in Grand Tours, Semi-Classics and on the track, but he was an entertainer and a joker in the peloton. Ed Hood pays his respects to Gerben Karstens. 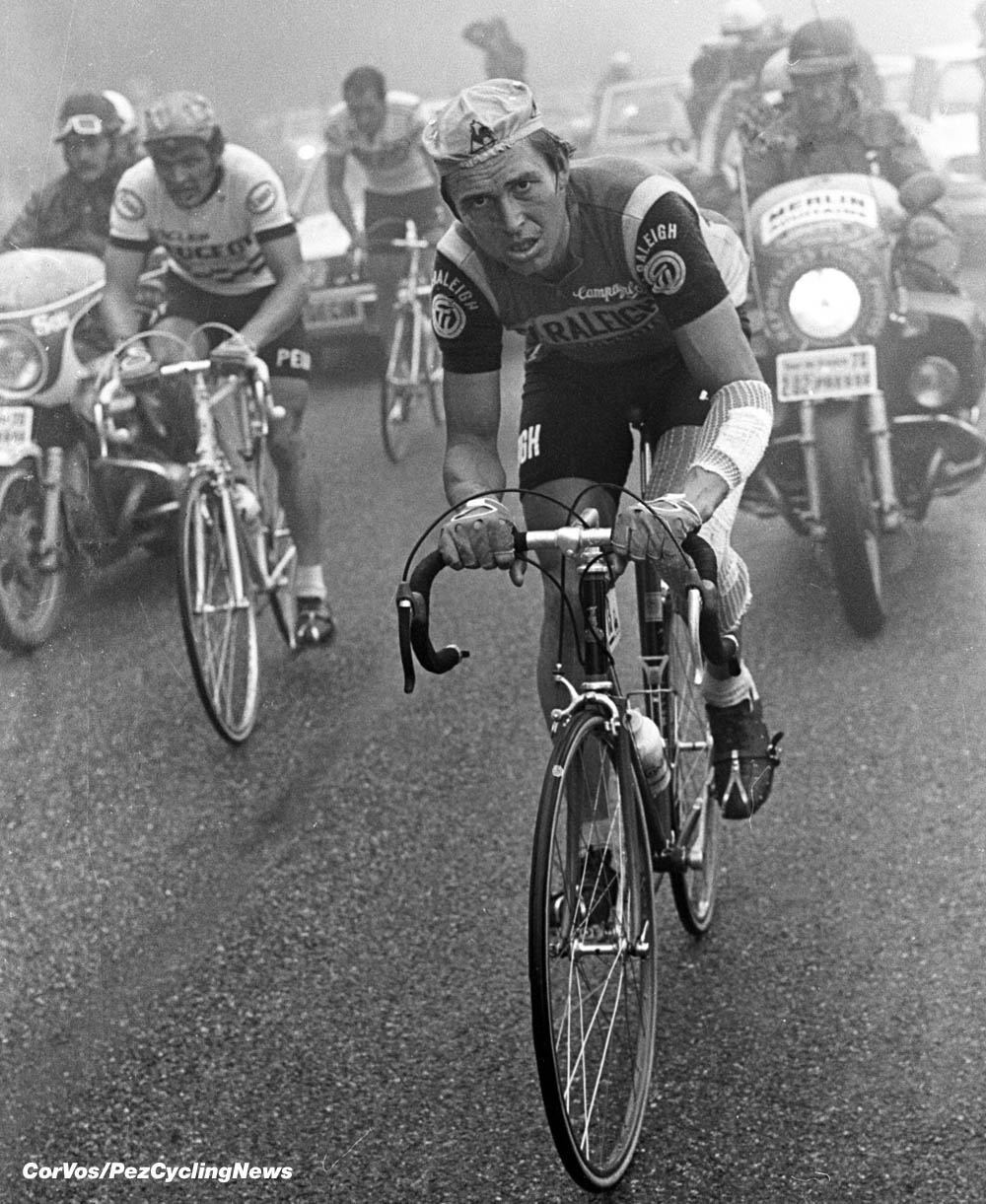 I hope he’ll forgive me for getting to this piece rather belatedly, as he looks down from that peloton in the sky; but then he was never a man to take himself too seriously, despite 14 Vuelta a Espana, six Tour de France and one Giro d’Italia stage wins, not to mention Paris-Tours and podiums in the Primavera, Tour of Lombardy, Gent-Wevelgem and Amstel Gold Race. He is also one of only five Dutchmen to have won stages in all three Grand Tours, along with Jeroen Blijlevens, Erik Breukink, Jean-Paul van Poppel and Tom Dumoulin. 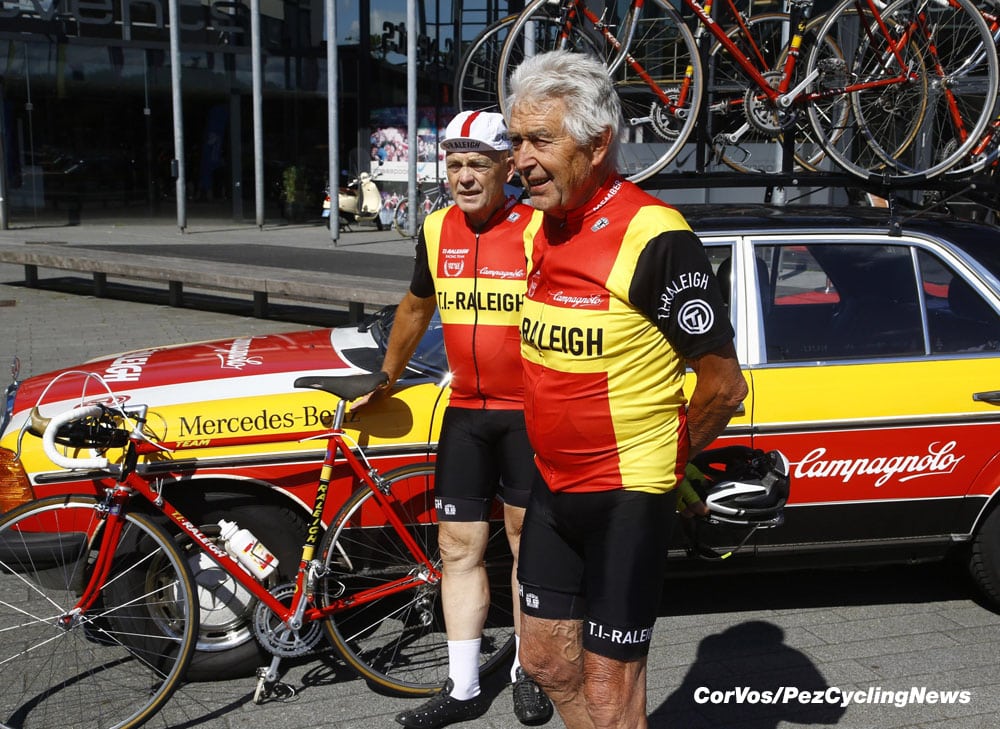 Gerben Karstens passed away 8th October 2022 after complications when he suffered a stroke at the age of 80 years. Originally a speed skater at national squad level he chose the bike against the wishes of his father who was a notary public in Leiden, South Holland. 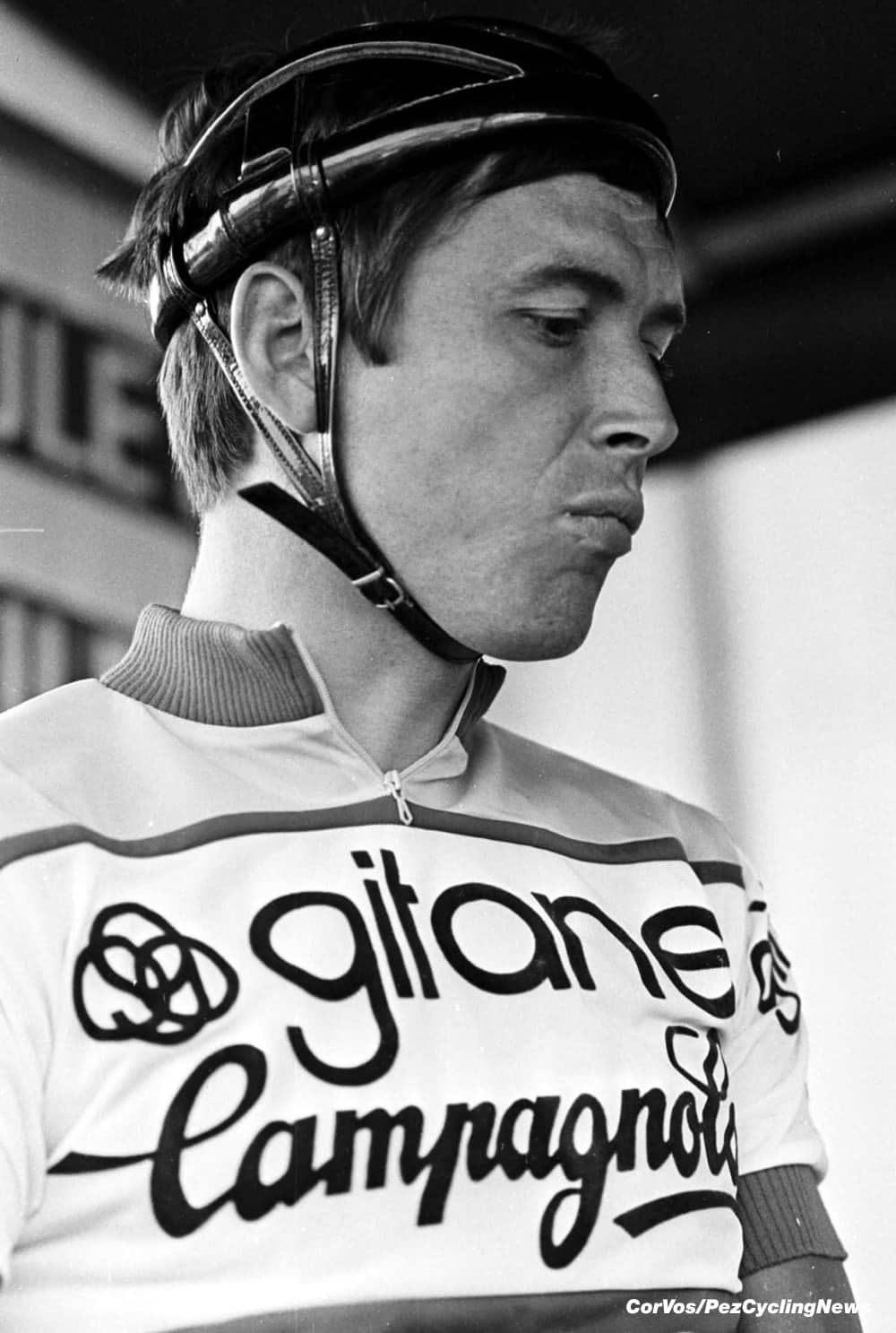 Karstens went on to be a professional for 18 seasons, the very epitome of the 70’s ‘roadman sprinter’ – good looking, cool, fast, a risk taker, full of life and fun. But there was more to the man than a fast finish, he was a good time trial rider and excellent track man too. He was Military Champion of The Netherlands in 1962 during his national service, also a year when he won the high profile Ronde van Limburg. 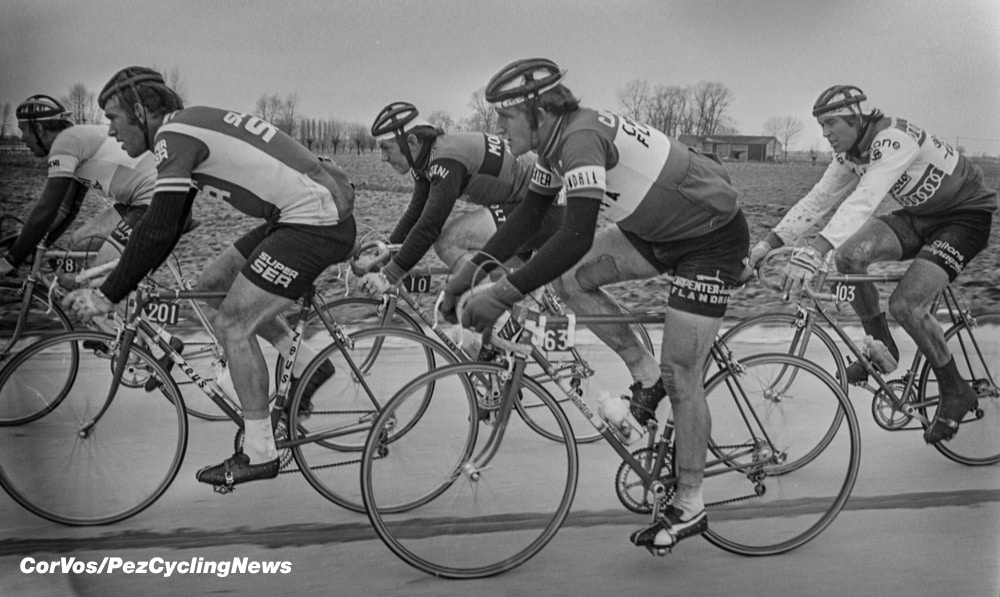 The first hint of greatness came with fifth in the 1963 Ronse amateur road Worlds but the following year he put down the deposit on a pro contract with a gold medal in the Tokyo Olympic Team Time Trial with the late Bart Zoet, Jan Pieterse and the man who denied Britain’s Les West gold in the 1966 World Amateur Road Race Championships, the late Evert Dolman. Karstens then made doubly sure of a pro contract with a Tour de l’Avenir stage win. 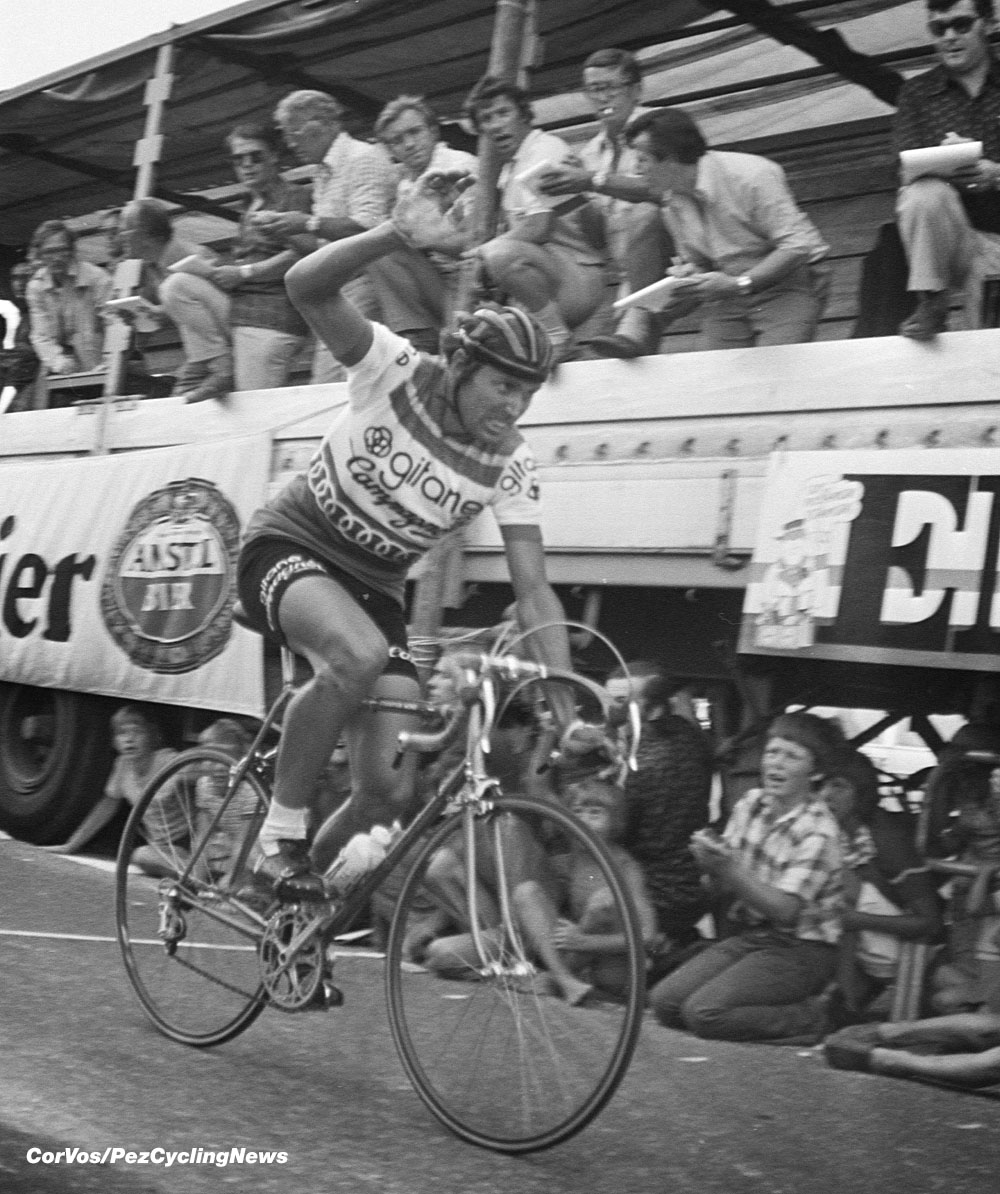 A win for Gitane in Kamerik or Dongen 1975

He turned pro in 1965 with Dutch team, Telvizier – his debut was stunning with stage wins in the Tour of the Netherlands and Tour de France then the late season ‘sprinters’ classic,’ Paris-Tours which had a much higher profile back then than it does now. In 1966, still with Televizier there were two more Tour de France stage wins, three Vuelta stages, the National Road Race Championships and what was a very prestigious race back then, the ‘invitation only,’ Criterium des As – a Derny paced race at Longchamp, Paris.
Second was Felice Gimondi and third Raymond Poulidor. 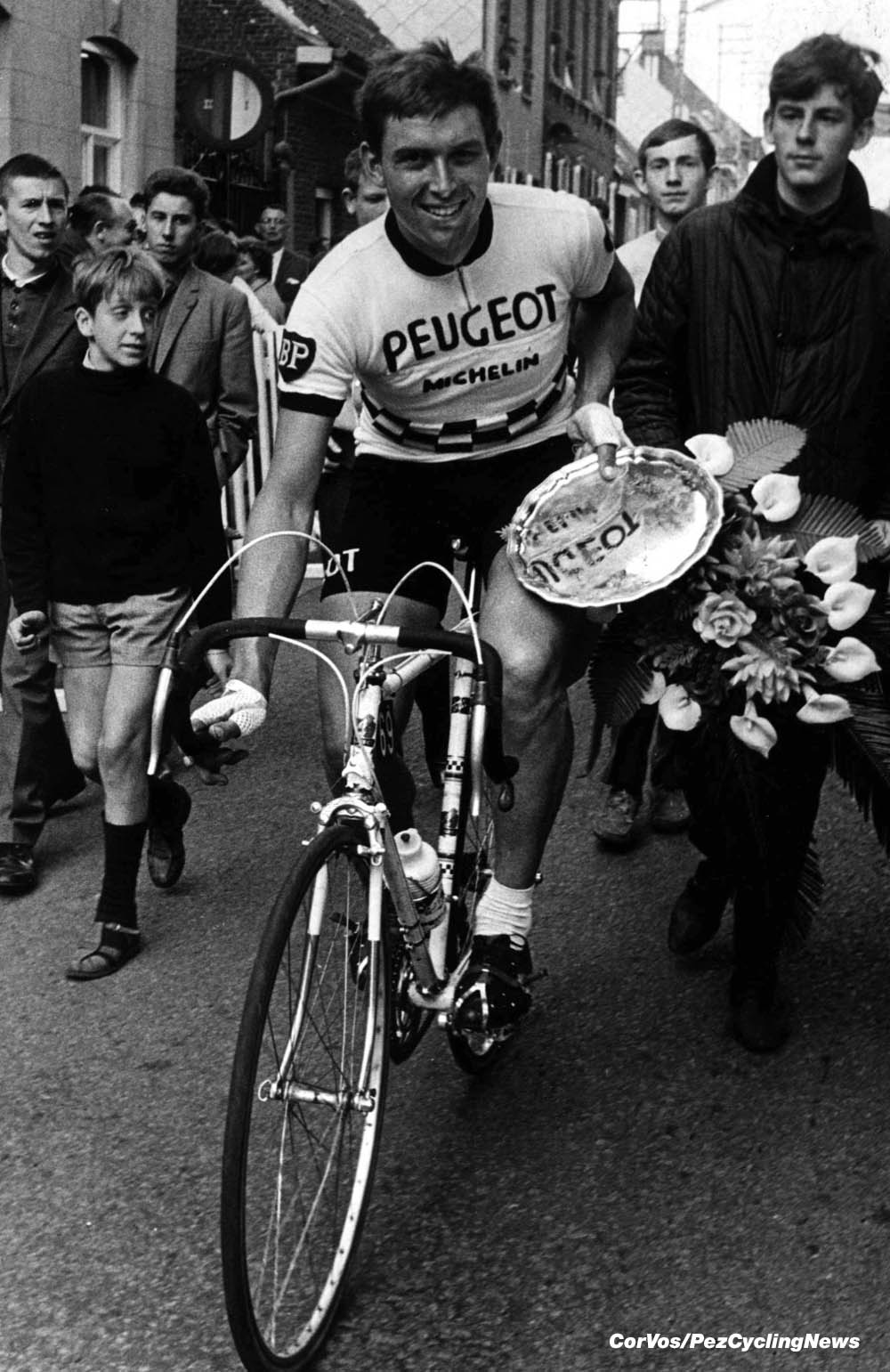 In his final year with Televizier he took four Vuelta stages, one of which was a time trial.
In 1968 he joined the mighty Peugeot equipe and took the GP Fourmies. But the French team with the beautiful jersey didn’t give him his best years albeit there was a Four Days of Dunkirk Stage in 1968 and a Tour of Belgium stage in 1970. 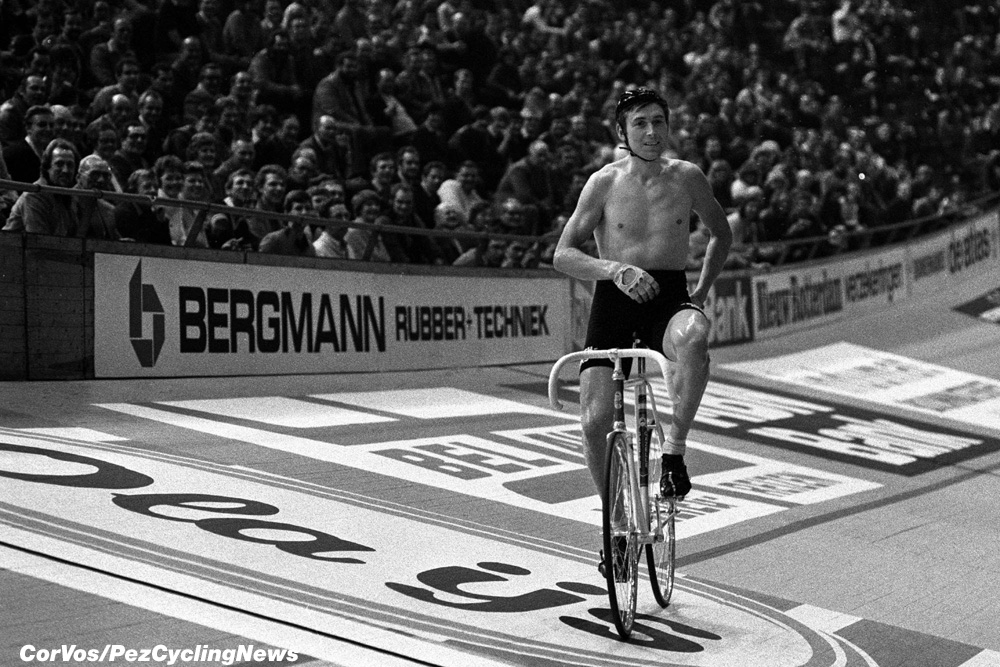 On the boards of Rotterdam-Ahoy

For 1971 he was in the orange of the Dutch Goudsmit Hoff team with stage wins in the Tours of Spain, Switzerland and France. The next two seasons saw him in another ‘loud’ jersey the blue and yellow of German team, Rokado. There were stage wins in Switzerland and Sardinia in 1972, on the track there was the Dutch Madison Championship with Rene Pijnen and a podium in the London Six Day with big, strong countryman, the late Leo Duyndam. 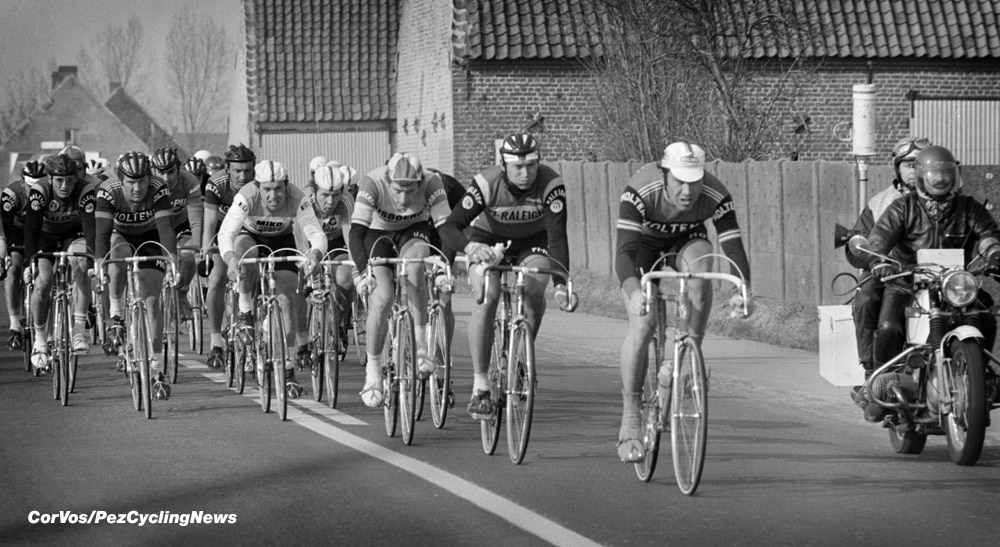 In 1973 he took four Vuelta stage wins, a stage in the Giro and won the Criterium des As again; this time ahead of Gimondi and Eddy Merckx – all that six day Derny following standing him in good stead. In 1974 he was back ‘en France’ and in orange again, this time with Bic, taking a Vuelta stage, a Setmana Catalana stage, the Tour du Haut Var and wore the maillot jaune in le Tour for two days. 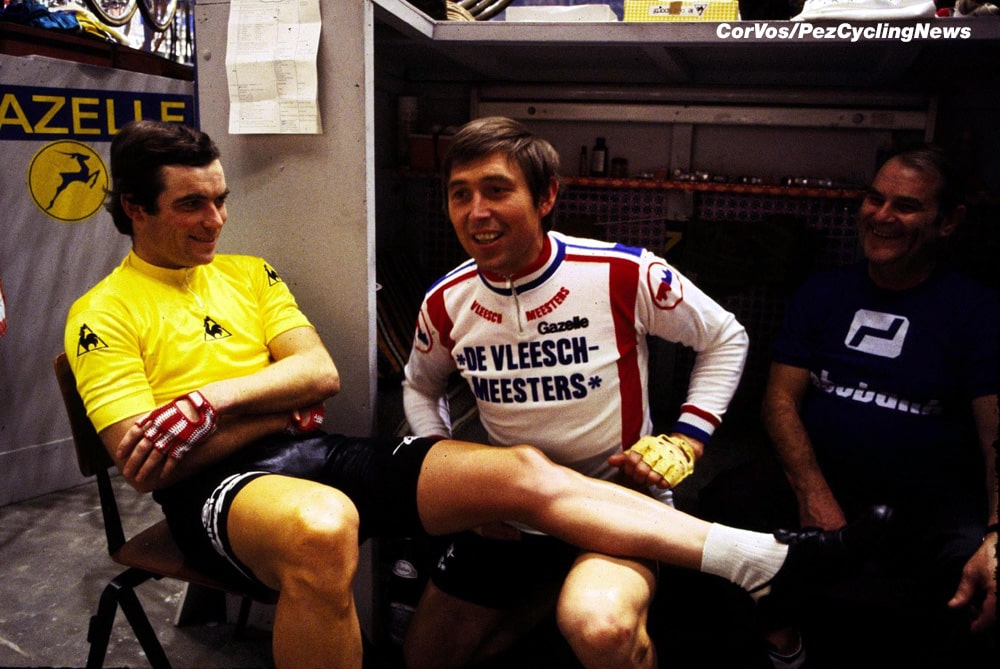 Bernard Hinault and Gerben Karstens in the Zesdaagse van Rotterdam

On the winter boards, he won in London with Duyndam. In 1975 it was another French team, Gitane with Bernard Hinault and a stage win in the Tour of Luxembourg; on the boards there was victory in the Rotterdam Six Day with Duyndam. In 1976 he joined the team with which he’s perhaps most associated, ‘de Keizer,’ Peter Post’s mighty TI Raleigh armada – ‘Total Cycling’ was the name of the game, the lightest, strongest frames, the best equipment, clothing and team cars. 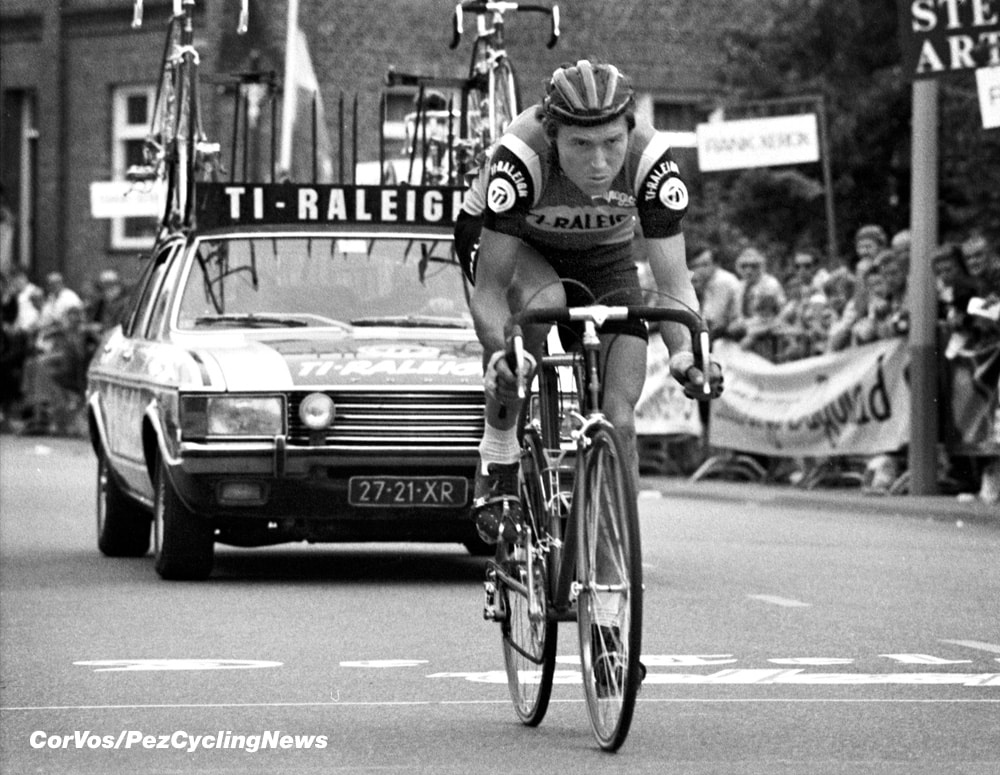 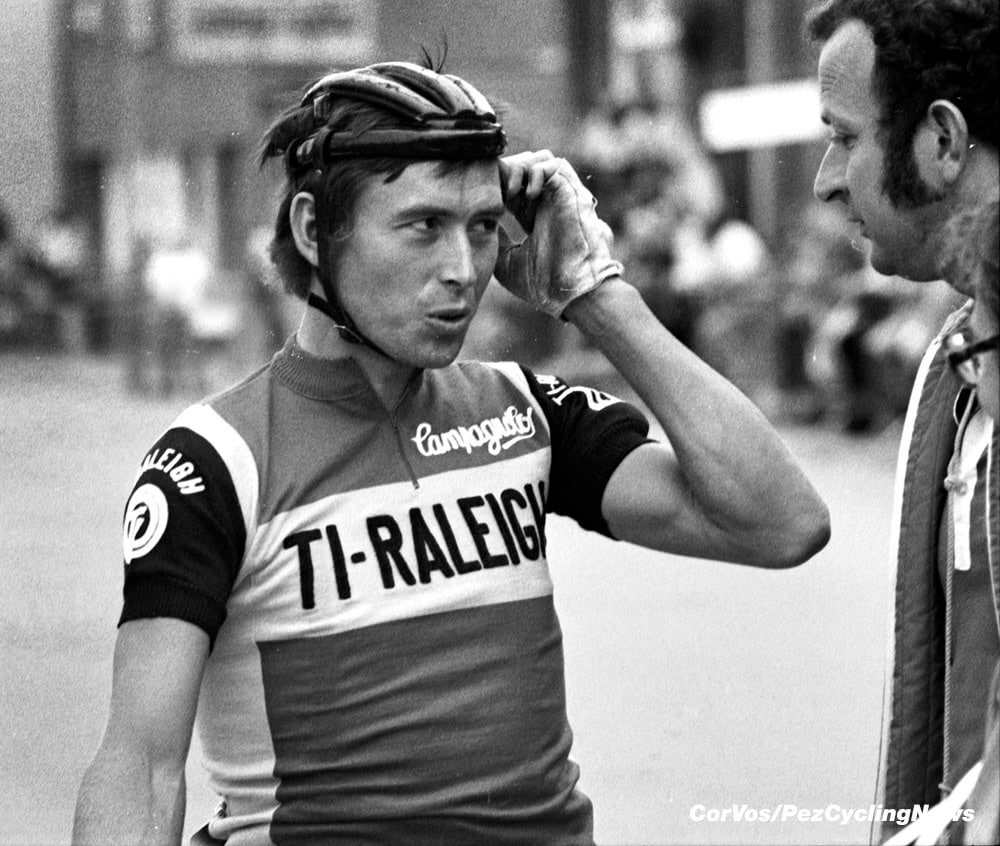 In ’78 there were criterium wins but nothing major. His last two seasons were spent ‘single sponsored’ – as many six day men were – with De Vleeschmeesters; gaining podiums in the London Six Day and two in the Montreal Six Day with legendary six day man, Rene Pijnen and big motors World Champion Martin Venix respectively. But Karstens wasn’t just about palmarès, he was a photographers’ dream – wearing a gorilla mask, jollying along an injured Eddy Merckx in the Tour de France. 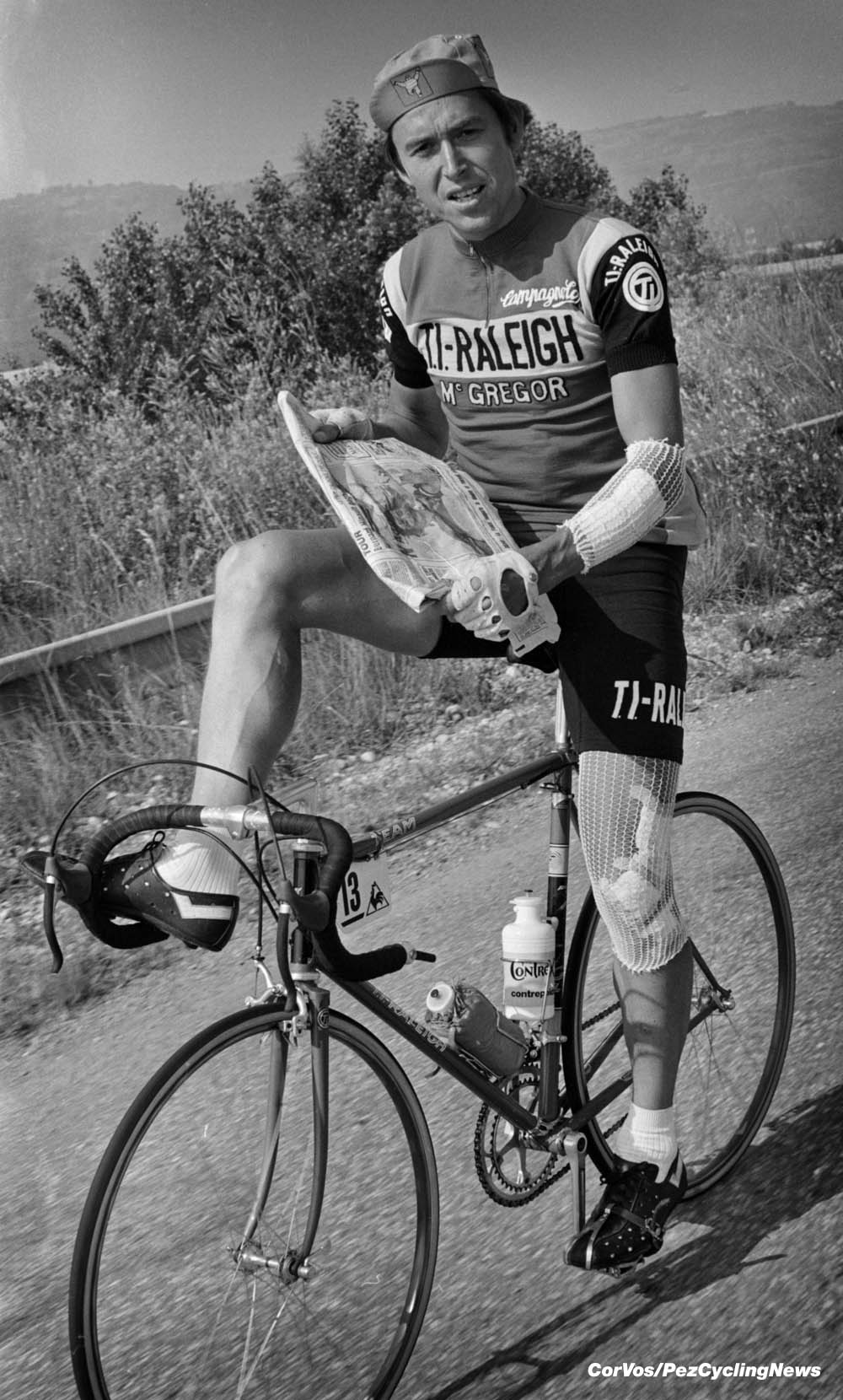 Then there’s Karstens sprinting ahead of the peloton, hiding in the undergrowth then jumping out in front of the speeding bunch or, on another occasion, ‘playing possum’ laying in the road. And there are the shots of him riding in the peloton on other rider’s shoulders, riding beneath a raised umbrella, riding along reading the newspaper. . . 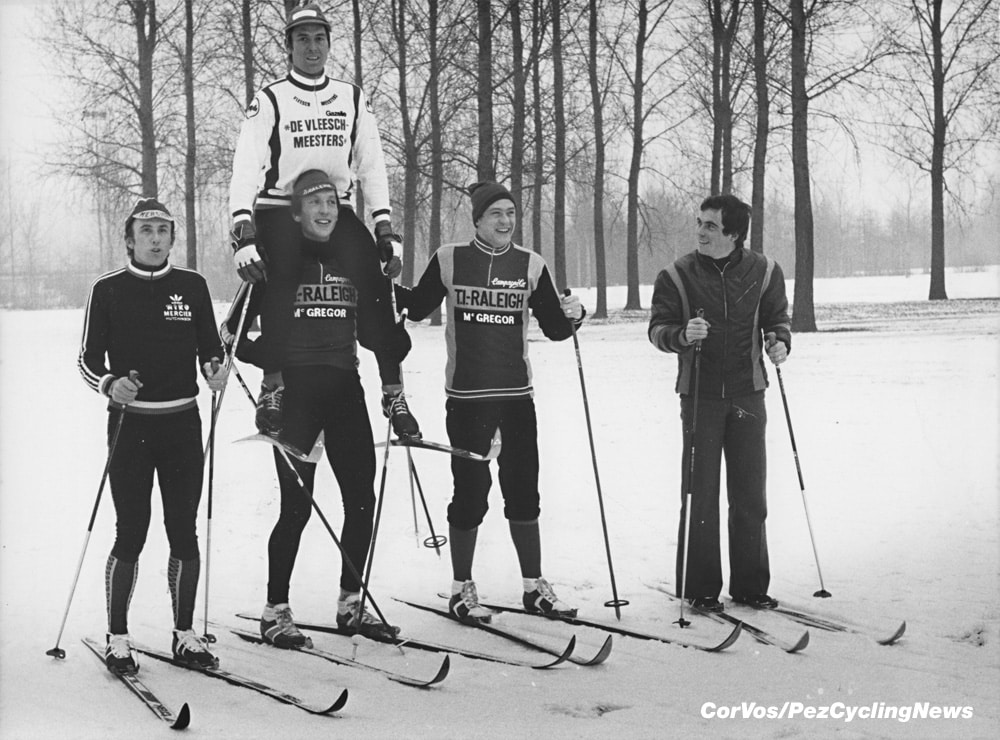 ‘A grey man’ or ‘robot’ he was not. Despite the high jinks he was a considerate and good boss in the six days, paying his staff what they were due right on time – a trait not common to all six day men of that era, sadly. 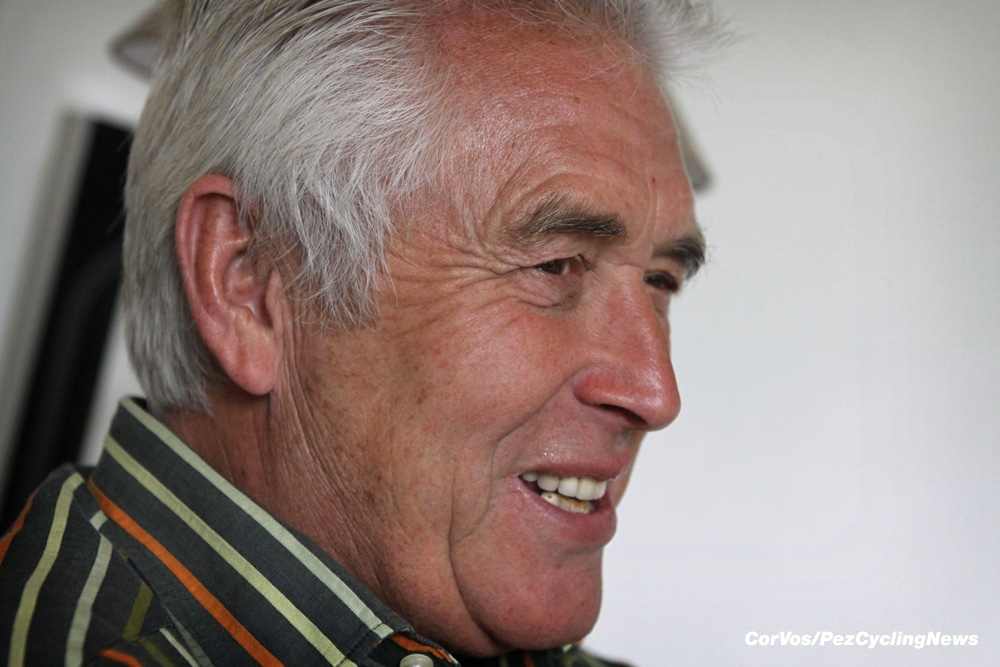