RIP Vittorio Adorni – A Champion and a Gentleman

Rider Obituary: Vittorio Adorni was one of the classiest riders to sit on a bike, at a time when there were many top riders: Jacques Anquetil, Jan Janssen, Felice Gimondi and sometime teammate, Eddy Merckx. Adorni died early on Saturday morning at the age of 85, Ed Hood looks at the great champion and his life. 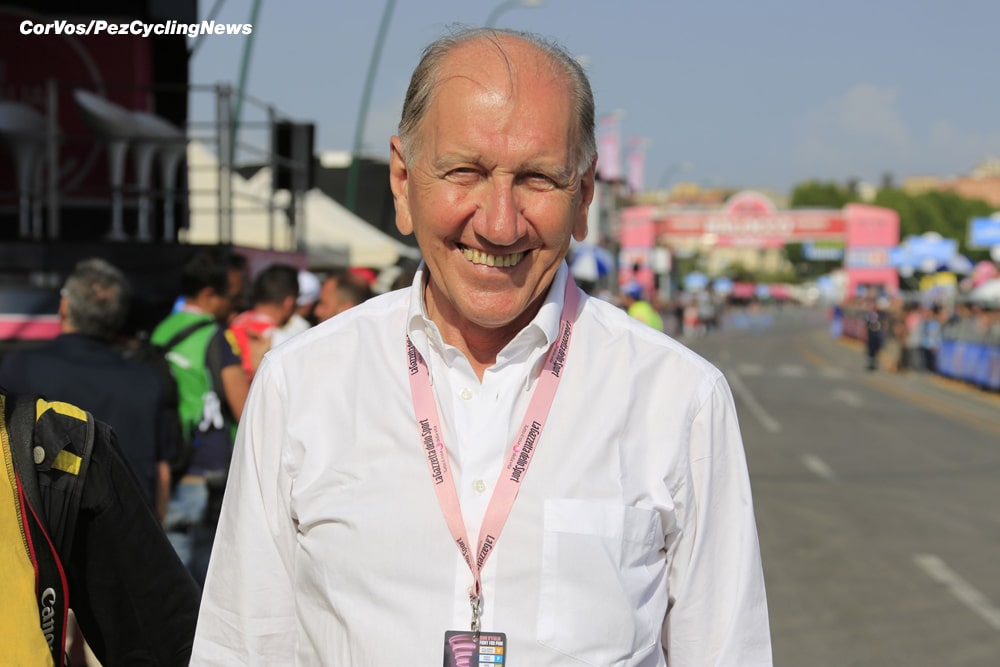 If you’re a regular reader then you’ll know that our mentor and spiritual guide, Viktor is not a man to dispense praise lightly; but he makes and exception for Italy’s Vittorio Adorni who we lost on 24th December at 85 years-of-age; just a few weeks after the passing of another Italian great, Ercole Baldini. “I saw Adorni ride the 1970 World Championships at Leicester, tall, slim, he looked as if he’d been carved from solid mahogany – the man had an aura. Pure class.” 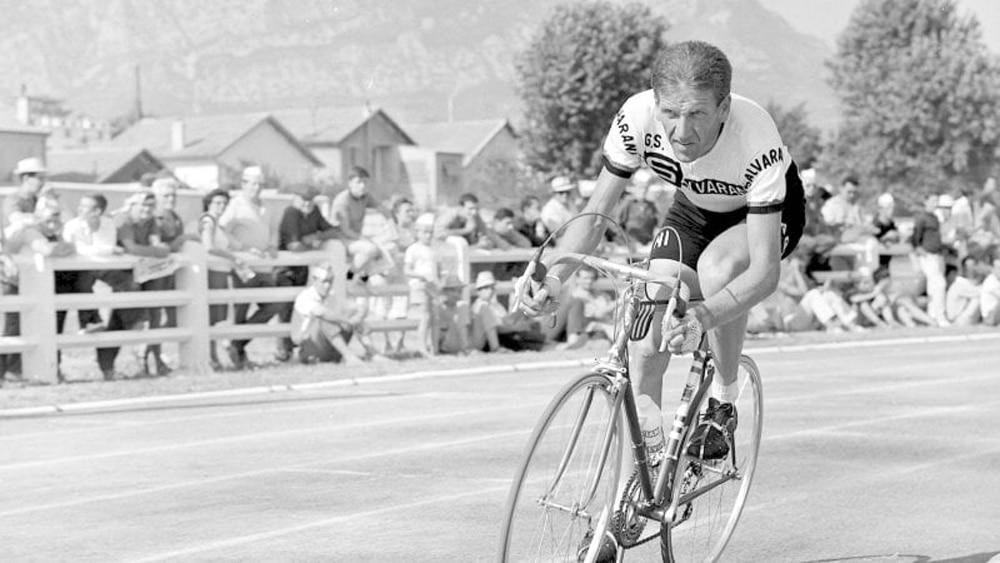 Dave and I used to see Sen. Adorni at Giro starts and finishes a few years back; tall, slim, straight and immaculate in his sharp suit and tie – every inch the classy elder statesman but always smiling. 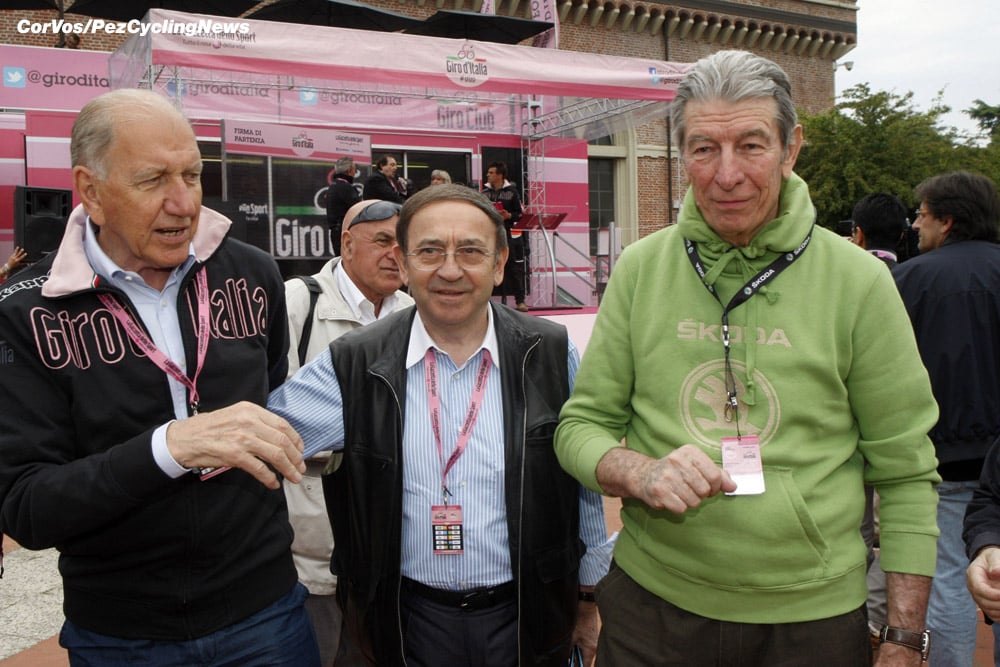 Born in San Lazzaro di Parma, Emilia-Romagna on 14th November 1937 his first big result was to win the Italian individual pursuit championship in 1958. He turned pro with the Vov team – which had evolved from the EMI electronics team – in 1961. It was another electronics firm’s name on the jersey for 1962, Philco and his breakthrough season with stage wins in the Tour of Sardinia and Giro where he finished fifth on GC to Franco Balmanion. 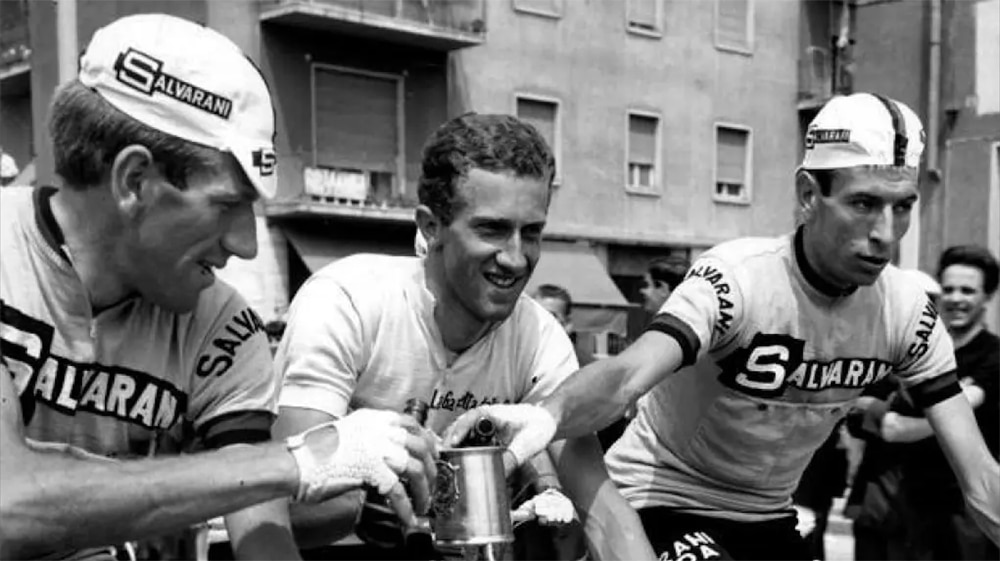 Adorni and Gimondi with Motta in pink

Cynar aperitif was the name on the jersey for 1963 with two stage wins in the Tour of Sardinia, two stages in the Giro and second place on GC, again to Balmanion. There was also third in Liège-Bastogne-Liège to endorse his credentials as a ‘Classicer’. In 1964 he moved to Kitchen Company, Salvarani’s team, where he would stay for three seasons, winning the Tour of Sardinia, taking another two stages in the Giro and finishing fourth on GC to Jacques Anquetil. He again underlined his single day talents with another third in Liege-Bastogne-Liege and second in the Worlds to Jan Janssen. 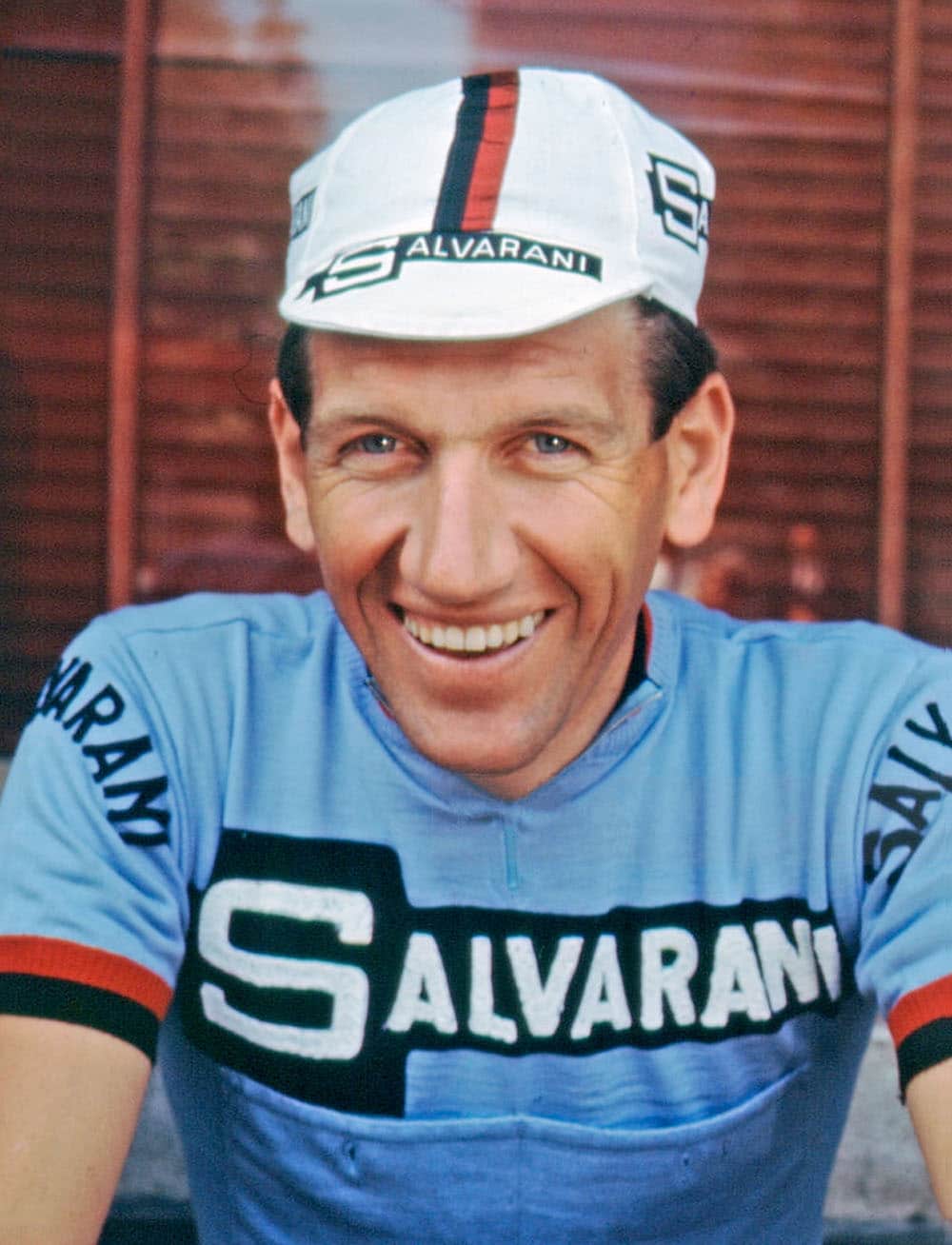 In 1965 he won three stages en route to his Giro GC win, won Romandie overall and was second in both Milano-Sanremo and Liège-Bastogne-Liège. There was a stage win and the GC in the Tour of Belgium in ’66 with another stage win in the Giro and seventh on GC behind Gianni Motta.
For ’67 the name on the jersey was Salamani Luxor TV, he took a stage and the GC in Romandie and another stage in Giro with a fourth on GC to Felice Gimondi. 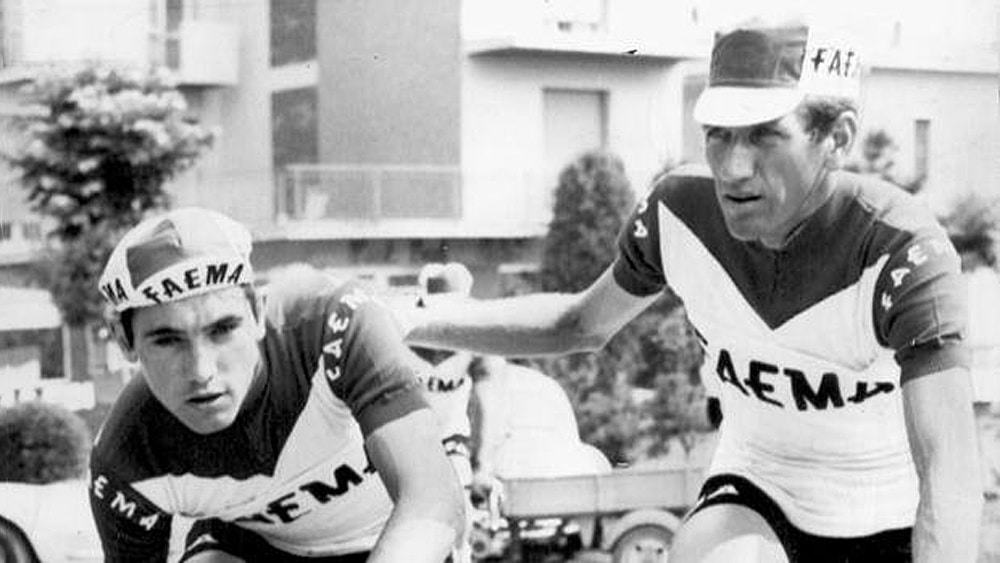 A young Eddy Merckx with Adorni

In 1968 he was in the red and white of coffee and coffee machine giant, Faema finishing second to young Belgian team mate, Eddy Merckx. Adorni was a valuable mentor to Eddy, telling him that the best ‘off the bike’ exercise he could participate in was pushing the plate away when ‘seconds’ were offered at meal times. He would also calm Eddy’s impulsiveness in races, telling his to wait before heading up the road way too early. This was the year Adorni became champion of the world, winning by almost 10 minutes after a 90 kilometre solo epic; and whilst the Italians were at their tactical best that day, closing down the race behind him then placing five riders in the top six what was also significant was that defending champion Eddy and his Belgian henchmen did not give chase. 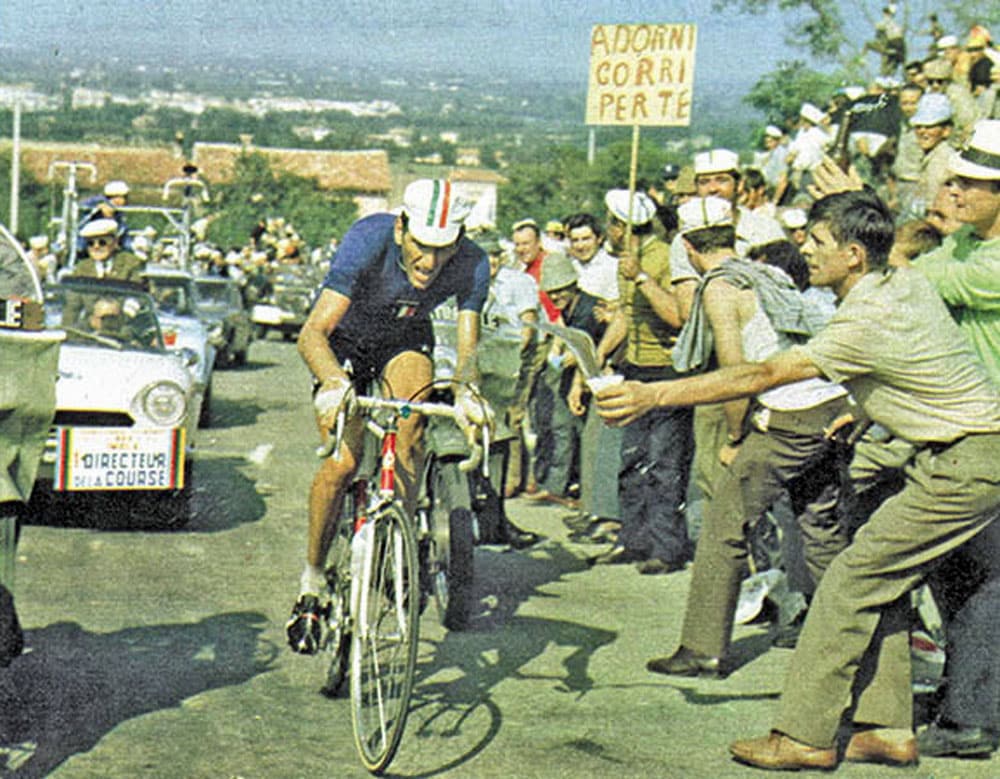 On his way to winning the World championships

In 1969 in the classic black and white colours of another Kitchen Company, Scic he took the Italian title, the Tour of Switzerland, a Giro stage and was second in Romandie to Gimondi. Season 1970 was his last, still with Scic he took five wins and a Giro top 10 finish. 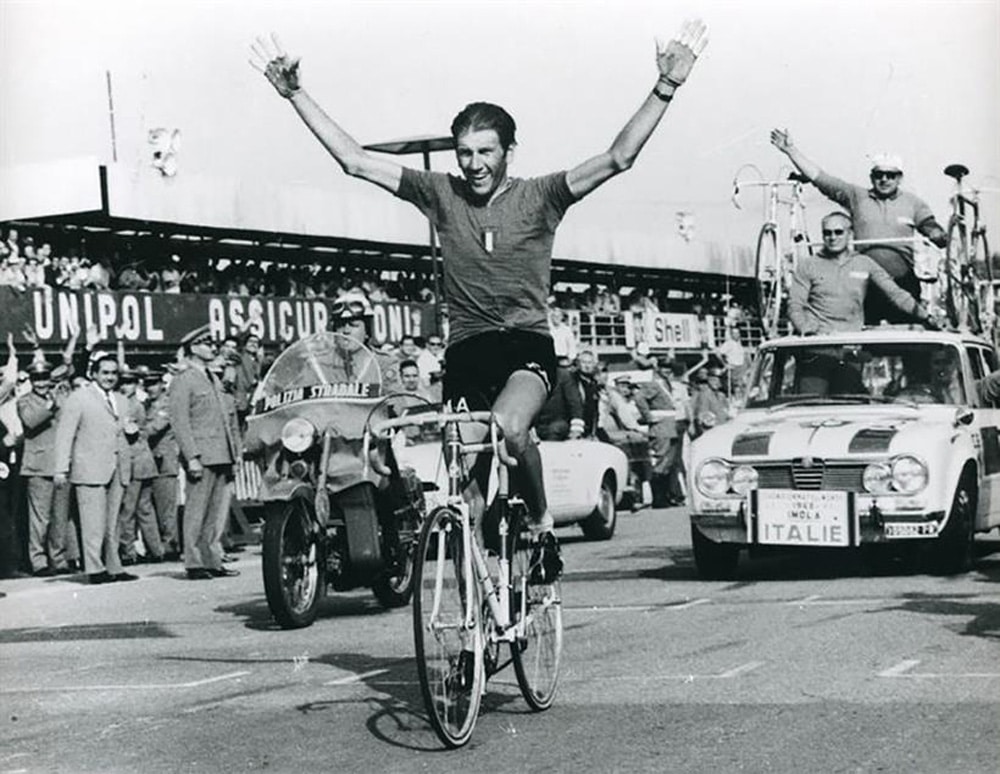 After he retired from cycling he went to work in insurance and then became a directeur sportif with the Salvarani team until 1973. He became president of the Italian riders’ association and was a commentator for the television company, RAI. In 2001 he joined the management committee of Cycling’s governing body, the Union Cycliste Internationale. 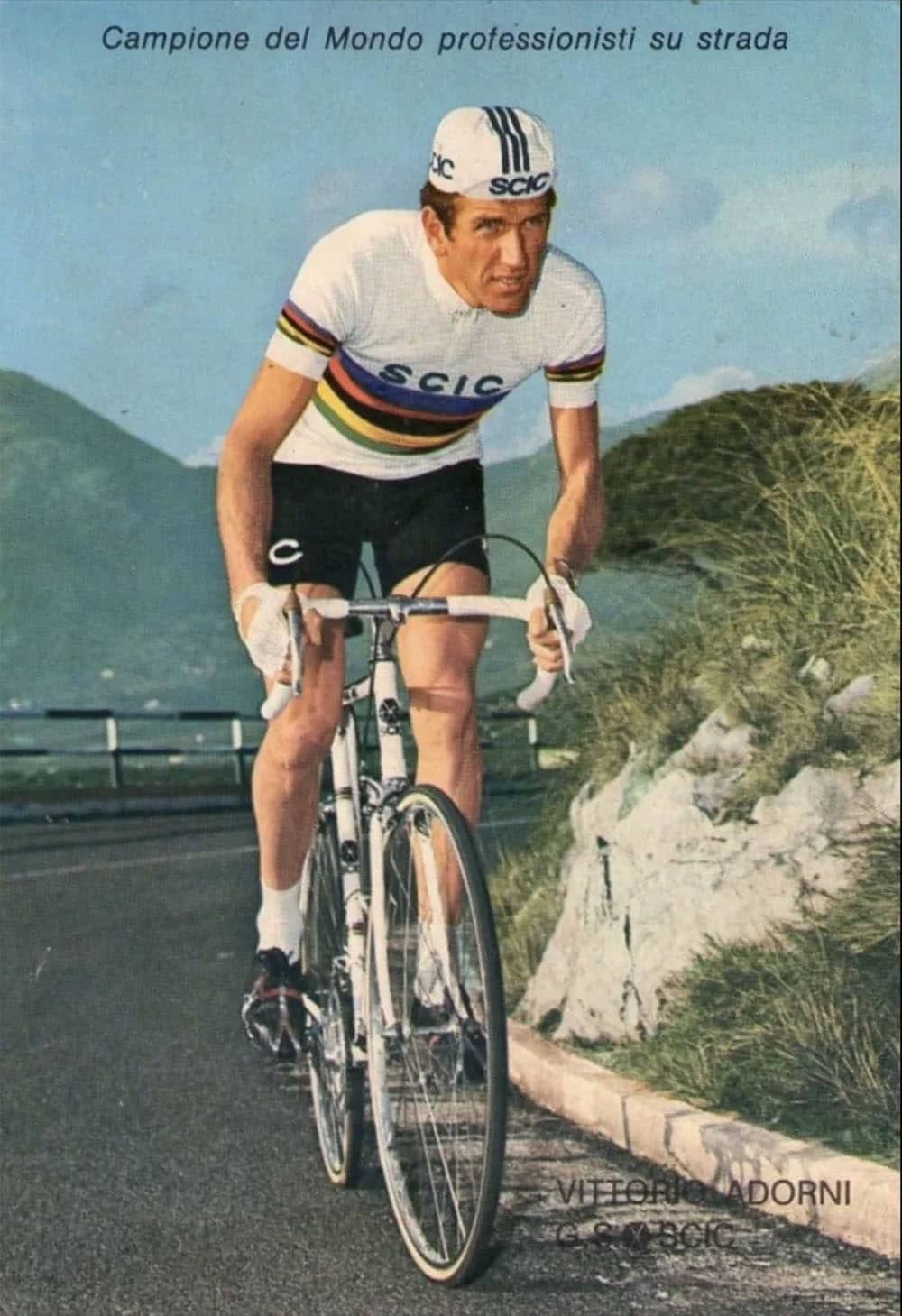 An affable, patient and skilled negotiator he was well respected by all those he came into contact with and is credited with keeping the Grand Tour organisers ‘on side’ when they were unwilling to become part of the UCi Pro Tour. 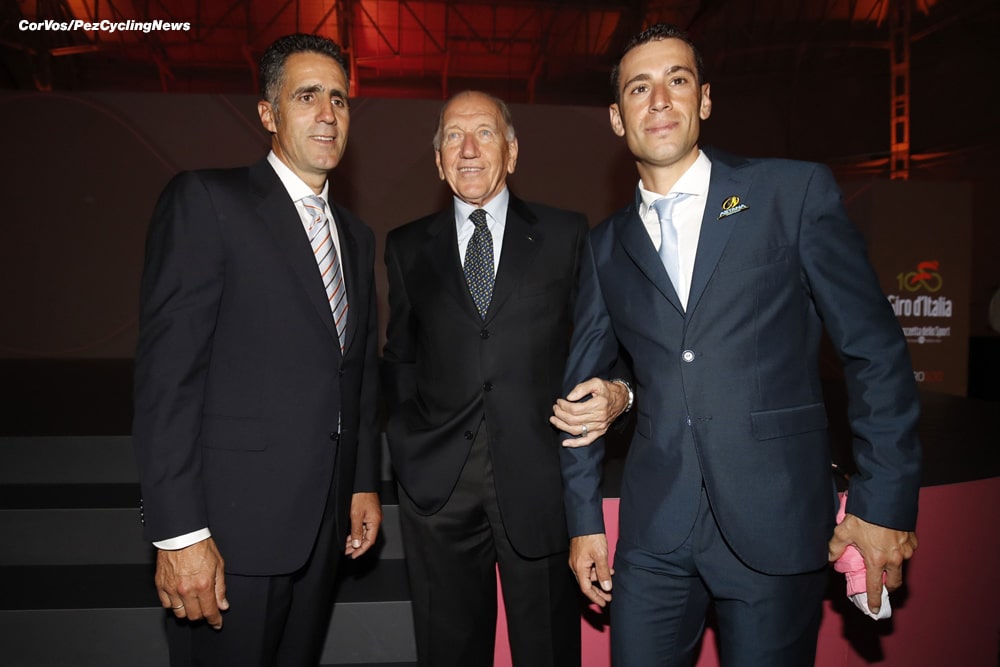 Miguel Indurain, Vittorio Adorni and Vincenzo Nibali at the presentation of the Giro d’Italia 2017 in the Palazzo del Ghiaccio, Milan 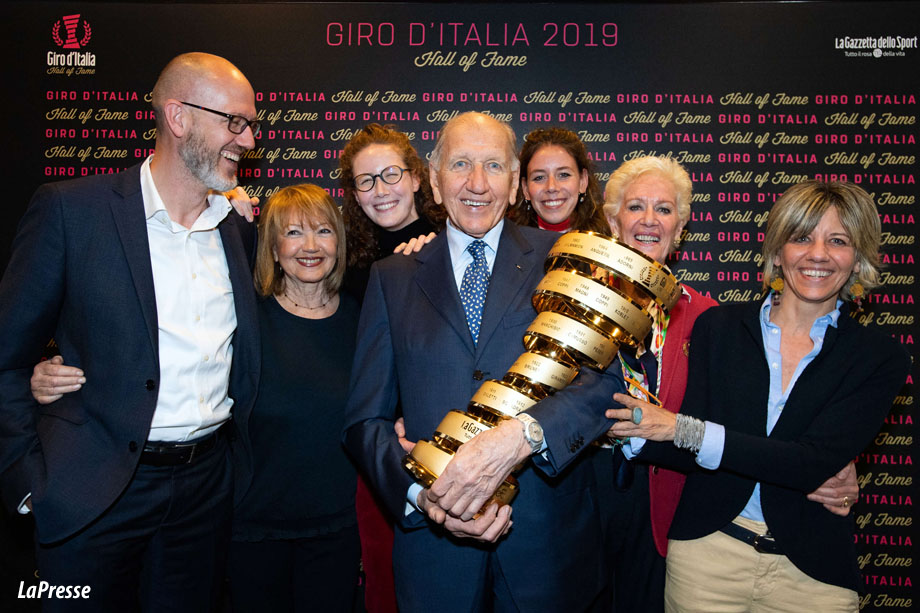 Offseason Training For The Masters Cyclist