PEZ Retro: After looking at the life and career of Alex ‘Mr. Magoo’ Zülle recently, our man in Spain, Alastair Hamilton, has now cast his eye on a Spanish icon; José María Jiménez. The Spanish climber was in the Pantani mould, and like the Italian he came to a sad end. Jiménez was a hero to many, but also his erratic riding and life style alienated others. ‘El Chava’ was one of the last pure climbers; exciting to watch, but ultimately tragic. 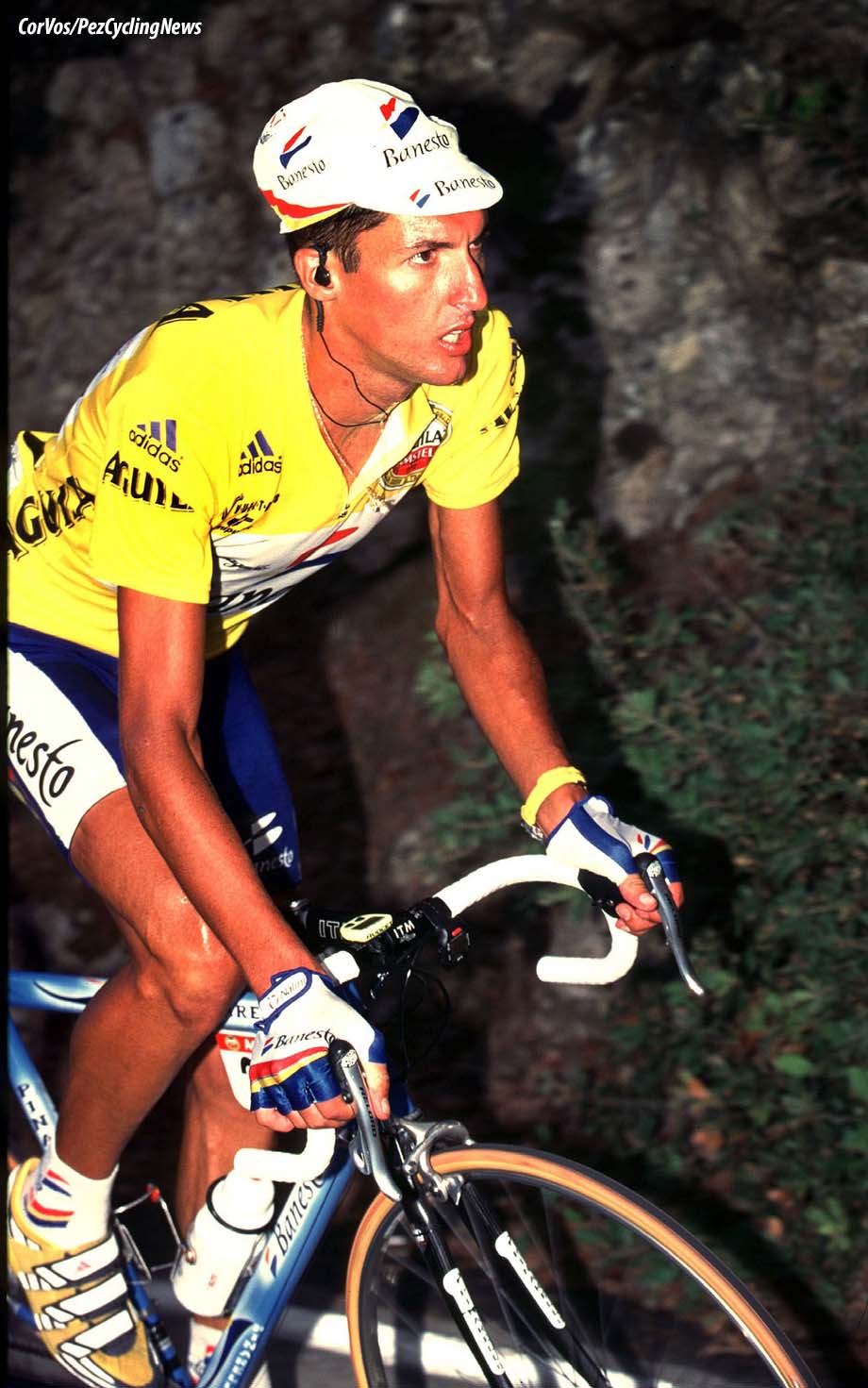 Jiménez in Vuelta yellow, as the leaders jersey was in those times

32 year-old, José María Jiménez, ‘El Chava’, died in a detox clinic in Madrid on December 6th, 2003. The cyclist from El Barraco in Ávila, smack in the middle of Spain, hung up his bike two years before due to his personal problems. He triumphed in the Vuelta, but, despite his great class and his ease of climbing the highest Cols, he never succeeded in the Tour de France, maybe that is why he has been mainly forgotten outside the Iberian peninsula. 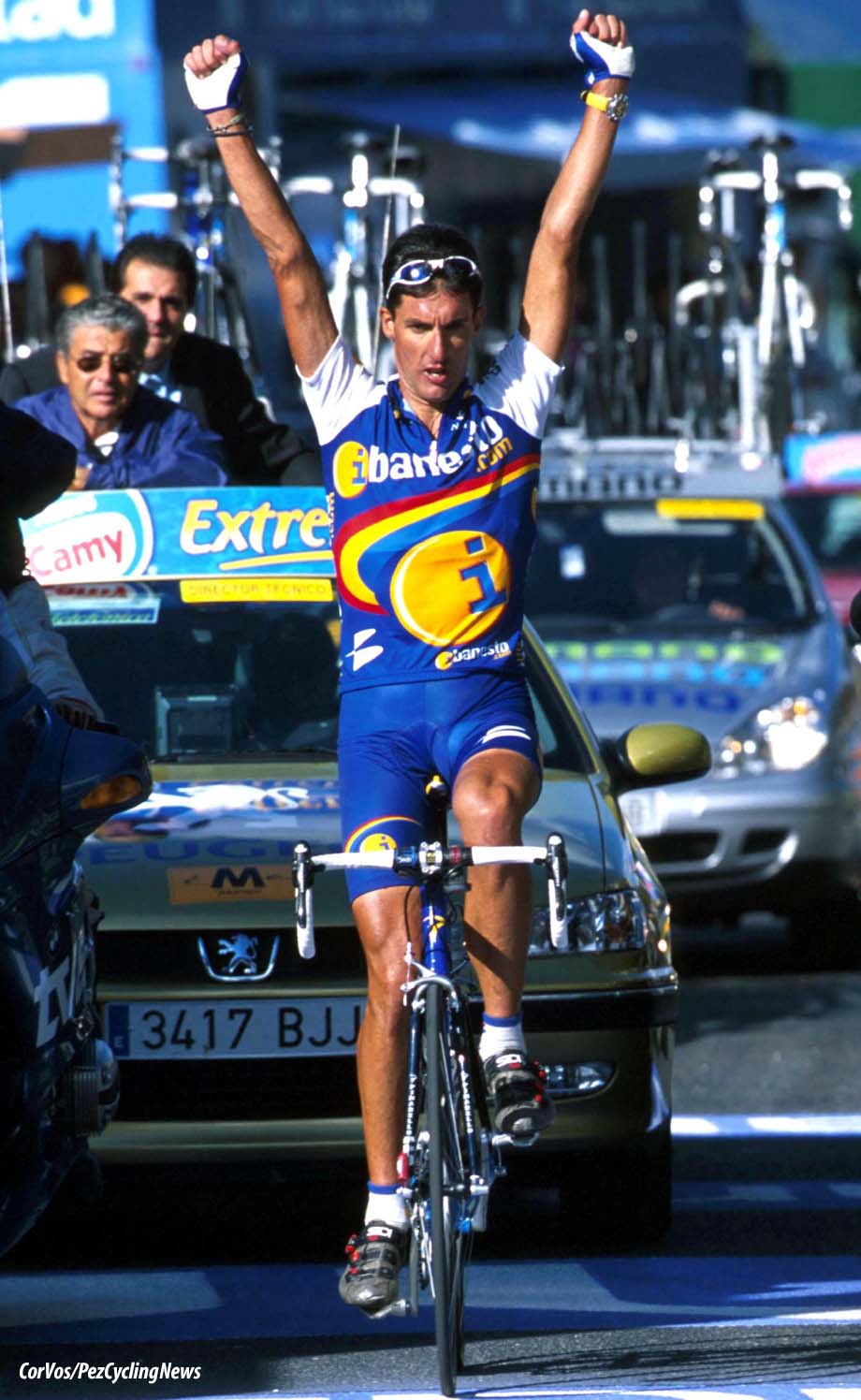 Jiménez was an idol of Spanish cycling, not like Miguel Indurain, Alberto Contador and even Alejandro Valverde, who are all loved by the Spanish fans, but more like Marco Pantani in Italy. ‘El Chava’ was the last rider capable of dividing fans between angry defenders and relentless critics. Both on and off the bike, Jiménez had an erratic character that excited the fans when he made a bold attack in the mountains, but also would infuriate the spectators when he would collapse spectacularly and lose a lot of time, seemingly without any concern. 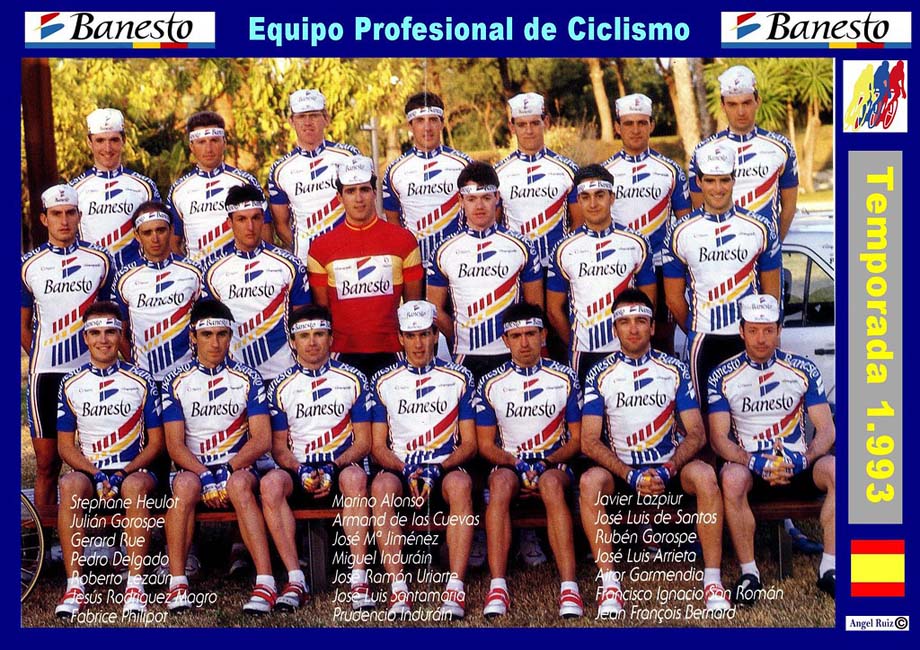 Jiménez rode as a stagiaire at the end of the 1992 season before he turned professional with the Banesto team the next year. He would only ride with Banesto under team manager, Eusebio Unzué, during his 10 year pro career. Alongside him were Tour de France champions Pedro Delgado and Miguel Induráin and the young Jiménez was expected to follow in their footsteps. 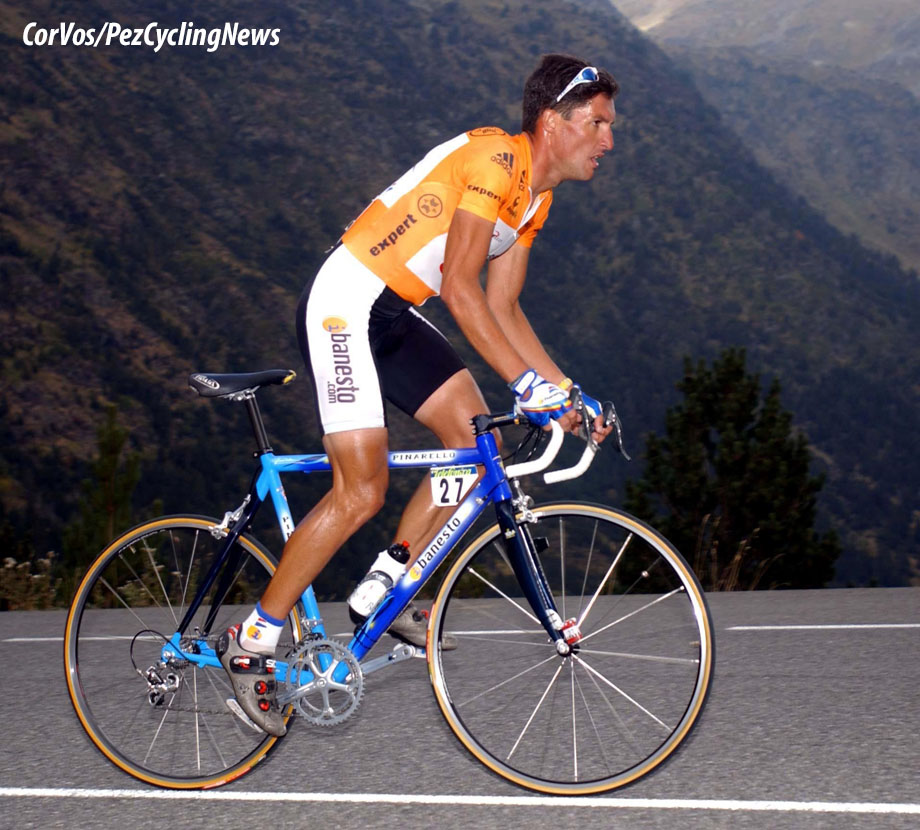 Jiménez was particularly successful in la Vuelta a España, he won nine stages in total, the final points jersey in 2001 and the KOM in 1997, 1998, 1999 and 2001. Only José Luis Laguía has won the mountains classification of the Vuelta more often, on five occasions. 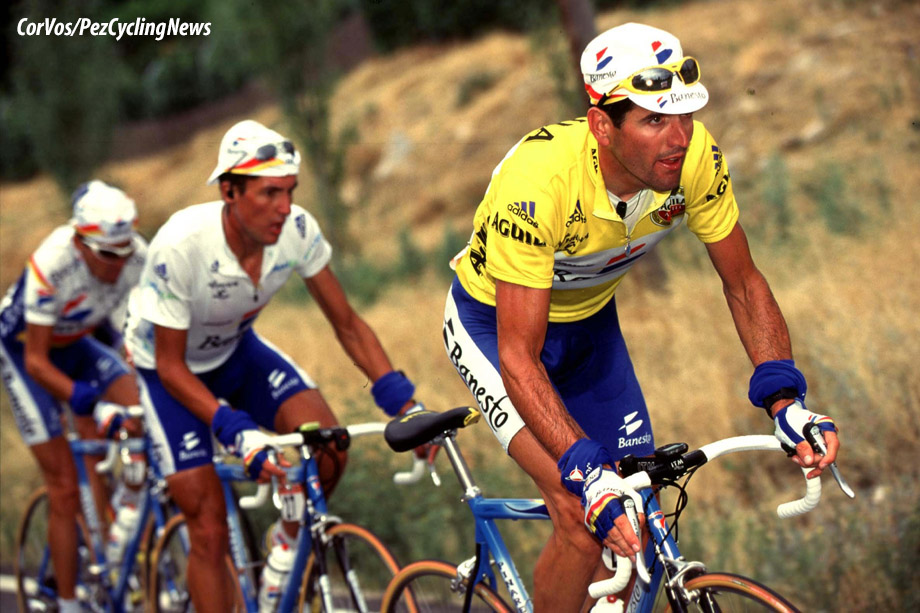 Of his Vuelta appearances, 1998 was probably his best year. Jiménez took the overall lead by winning stage 6.  After the stage 9 individual time trial, he was over three minutes down on Banesto teammate Abraham Olano, but Jiménez fought back to win stages 10, 11 and 16 to take back the overall lead with two stages to go. The problem was another time trial and he lost by nearly three minutes again to Olano. More bad news as Kelme’s Fernando Escartín took enough time to jump over him into 2nd place.  Jiménez finished 3rd overall, and this was probably his biggest chance of overall victory in a Grand Tour, but his weakness against the clock would always be a problem.

Jiménez finished the Tour de France four times, but he never really showed the same sparkle as he did on his home roads of Spain. Eighth overall in 1997 was his best final result, no stage wins, but finished in the ‘Top 10’ four times. In the 2000 Tour he was 3rd on stage 10 and 2nd on stage 15 behind Marco Pantani to finish 23rd overall, 52 minutes down on winner (or not winner) Lance Armstrong. 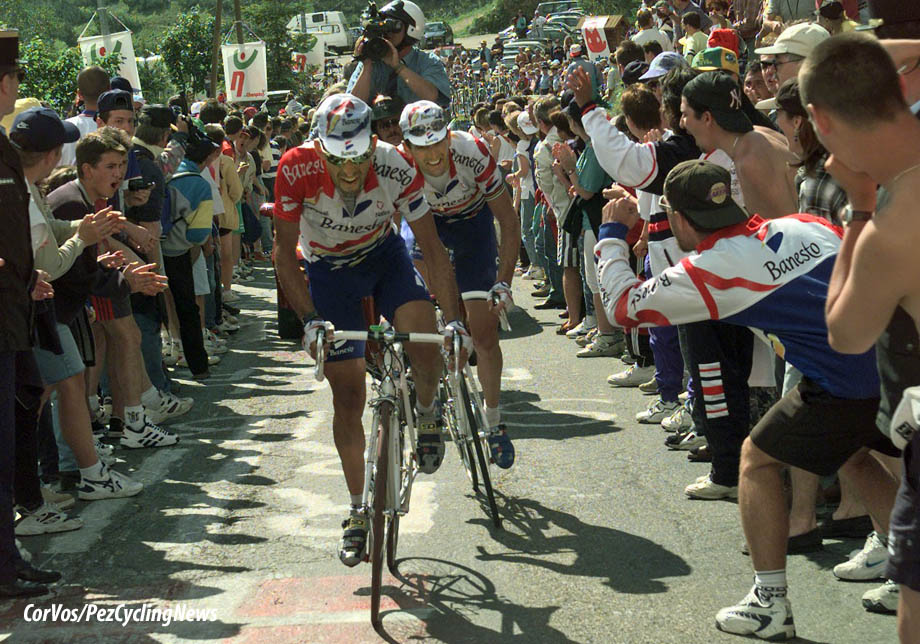 Jiménez and Olano on the Alpe D’Huez Tour’97

You would think the Giro d’Italia would have suited the Spanish climber and after finishing in 26th place in his first Giro in 1995, he was Banesto team leader in 1999 and took a fine 2nd place behind Marco Pantani on stage 8. Of course there was the problem of the time trial in Ancona and then the mountain stage 14 to Borgo San Dalmazzo, won by Paolo Savoldelli, Jiménez lost over 20 minutes and dropped to 38th place. In Milan he finished 33rd overall, behind Ivan Gotti, after race leader, Marco Pantani, was disqualified for a high hematocrit level before stage 21. Jiménez never rode the Giro again. 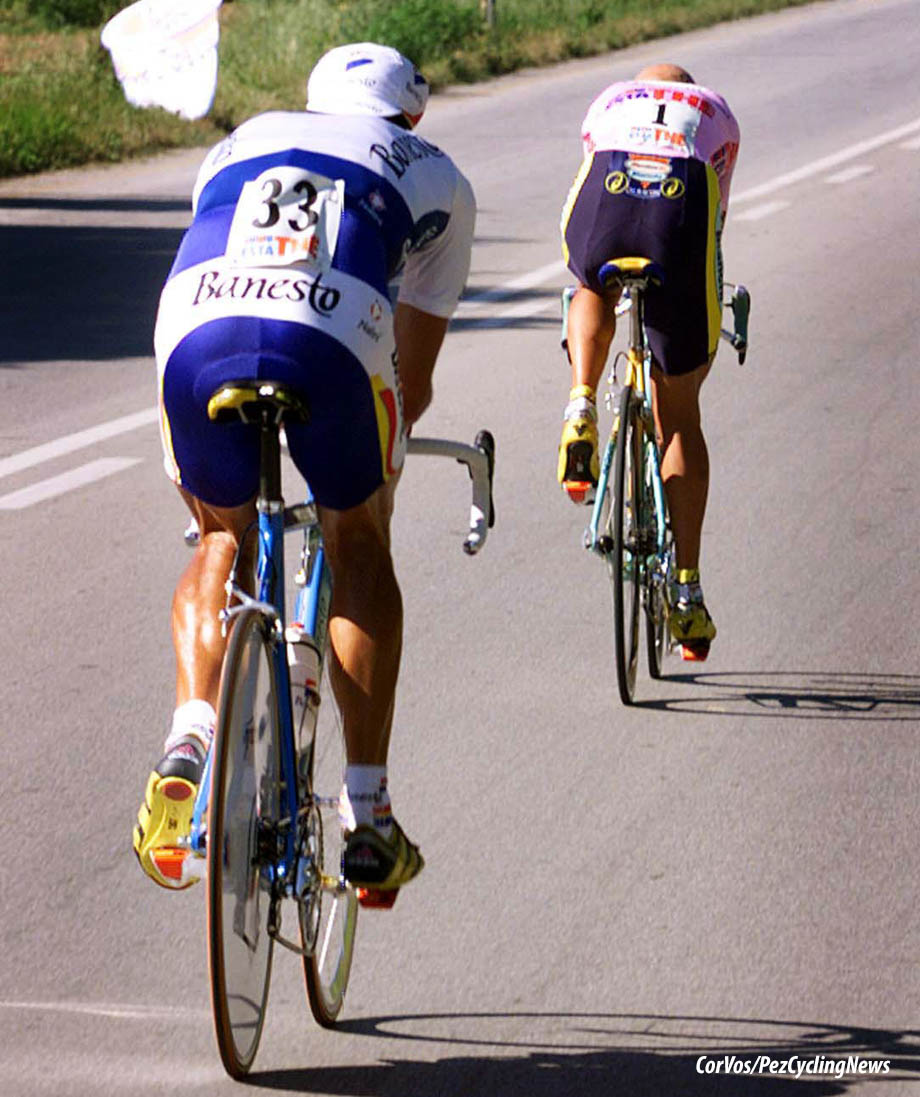 Marco Pantani passed Jiménez in the time trial, but the Spaniard sat on the pink jersey to the finish

Jiménez will probably be mostly remembered for his win on the Angliru in the 1999 Vuelta a España. He would often attack without considering the consequences, but when ‘El Chava’ emerged from the fog on El Angliru in 1999, the myth of the Vuelta was created. The Angliru needed a hero: Rain, wind, cold, fog – all the ingredients you need for an epic stage, but they also blinded the television, obscuring the action from the millions of fans at home. The headlights of the cars appeared and the figure of ‘El Chava’ danced ahead of them. 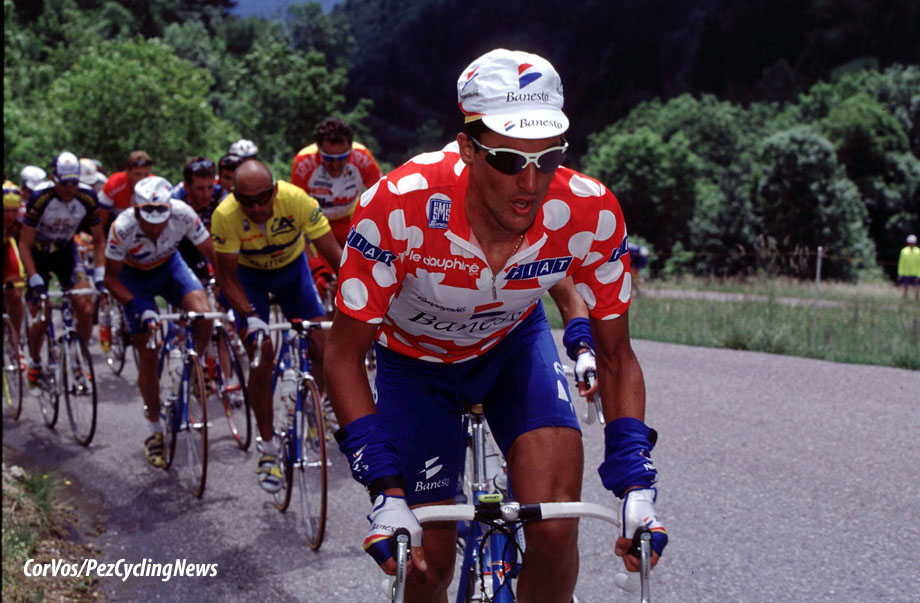 On the attack in the Dauphine

The Russian rider, Pavel Tonkov, had escaped, but then suddenly, fluttering through the inhospitable conditions, ‘El Chava’ appeared and beat him to the line. But the epic victory had all the ingredients of a mystery novel – a black novel. 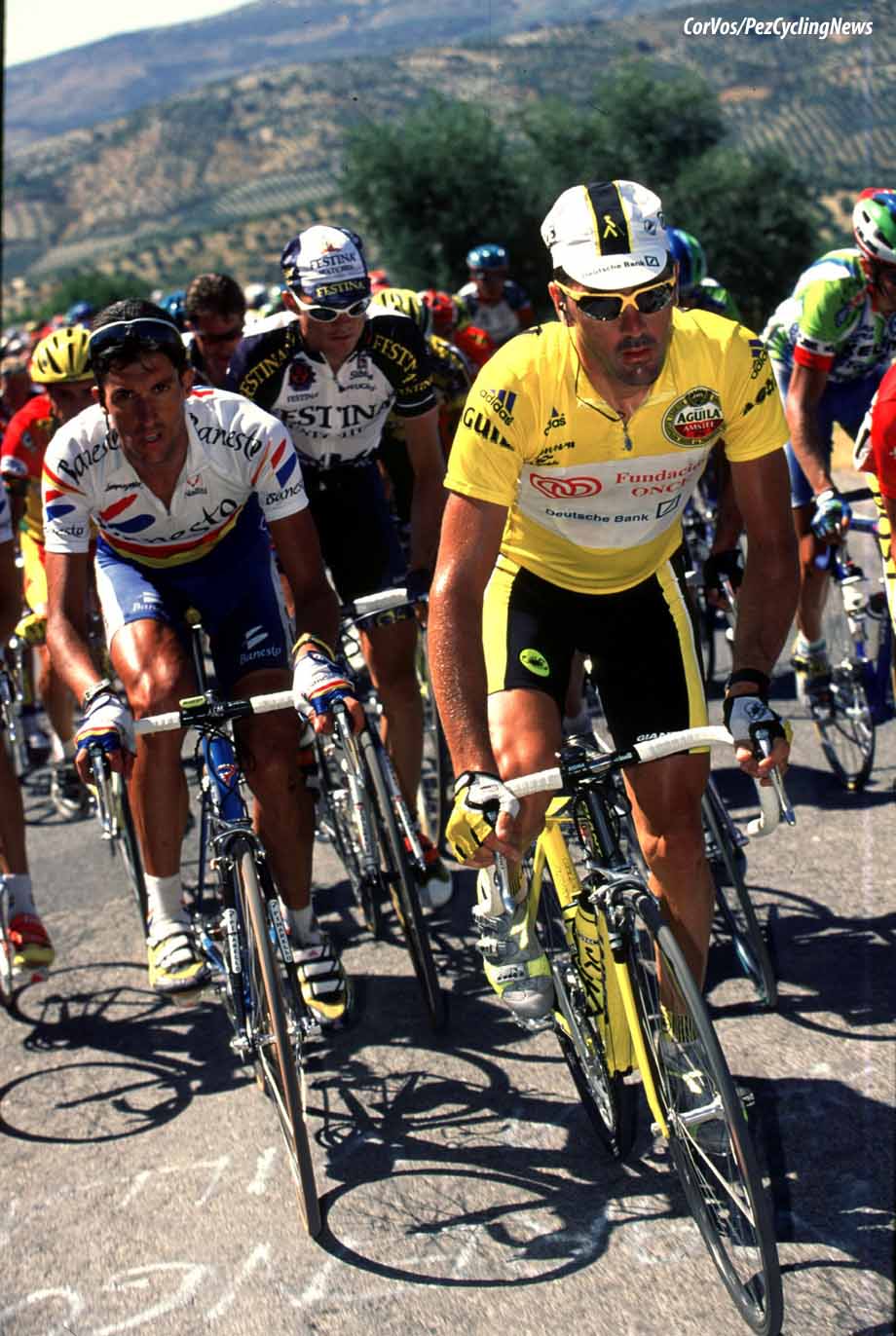 There were suspicions, not that the murderer was the butler with a candlestick in the library, but that Jiménez had held on to the cars, taking advantage of the fog, and the anonymity. There were spectators who said they saw it and others never saw anything. Tonkov was angry, although it all came to nothing, but there were many rumours about what happened. Jiménez caught Tonkov after his long solo break and took the stage in a two-man sprint. When Jiménez crossed the line, he did not have the energy for a victory salute. It was the first time in the history of la Vuelta that the Angliru had been used. 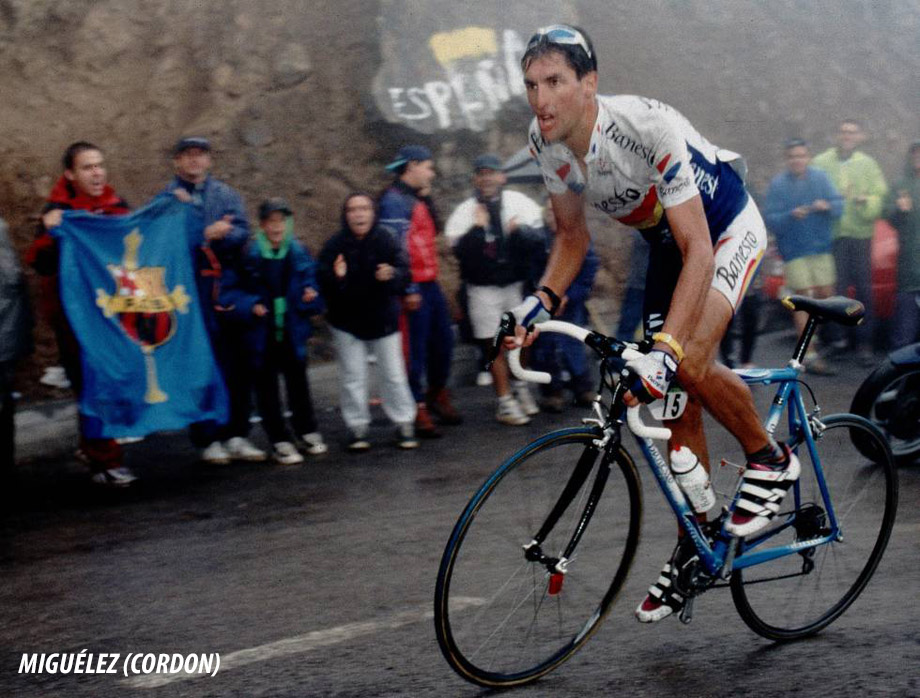 The Angliru myth was born and that prevails over the circumstances of what may or may not have happened in the fog. The summit had been toppled by Jiménez, one way or the other. He was a unique cyclist, but that all ended in 2003 when an embolism put an end to a race of excesses with drugs and alcohol. There was not a more melancholic hero for such an insolent peak as El Angliru. 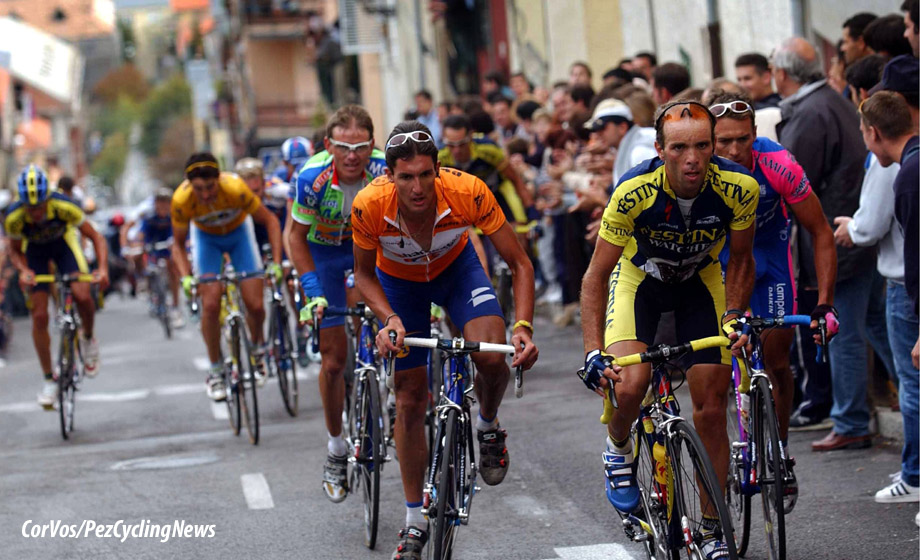 Jiménez was forced to hang up the bike in the winter of 2001, a few months after getting his third KOM in a Vuelta in which he won three stages. The inevitable death came when in one of his last moments of lucidity, José María had decided to go back to a clinic. Two years after losing the battle with cycling, he lost the battle with life.

José María Jiménez died at the age of 32. His death came when he was still in his youth, at an age when many of the cyclists of his generation were still hammering it on the roads. His death did not surprise any of those who knew the dangerous drift which his life had taken and the self-destructive mentality that encouraged it. “It was an inevitable death,” said Eusebio Unzué, his director at Banesto. “He had chosen this path. He didn’t look old.”

His early death makes a connection to two other icons of Spanish cycling; José Manuel Fuente, another stunning climber, able to put Eddy Merckx on his knees, died of liver problems, and Luis Ocaña, another tragic personality, who committed suicide at his farm near Mont de Marsan in France. Chava was lazy, nonconformist and lacked the greatness that led Ocaña to win a Tour, almost two, and Fuente to become the god of the anti Merckxists. Team DS, José Miguel Echávarri: “He raised so many passions and lived so fast that it seems like a lie.” 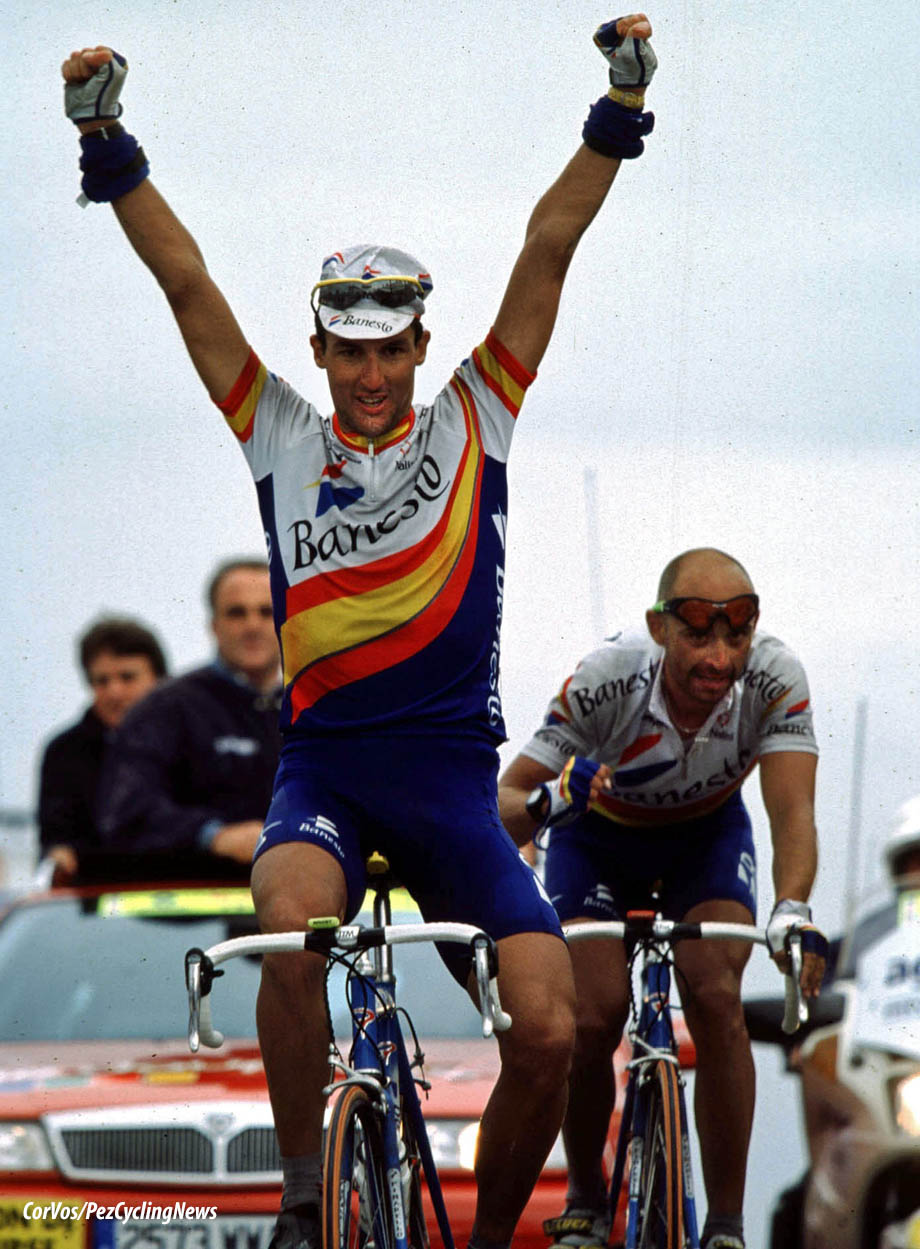 More than two thousand people attended the funeral of ‘El Chava’.  Jiménez never wanted to be a big cyclist, he settled for exploiting his great class, an innate facility to climb, to get in shape without effort, to do the minimum work that allowed him to continue with a good salary and with the popularity of the fans, especially children. That is why ‘El Chava’ only triumphed in the Vuelta and never tempted the adventure of becoming immortal in the Tour. 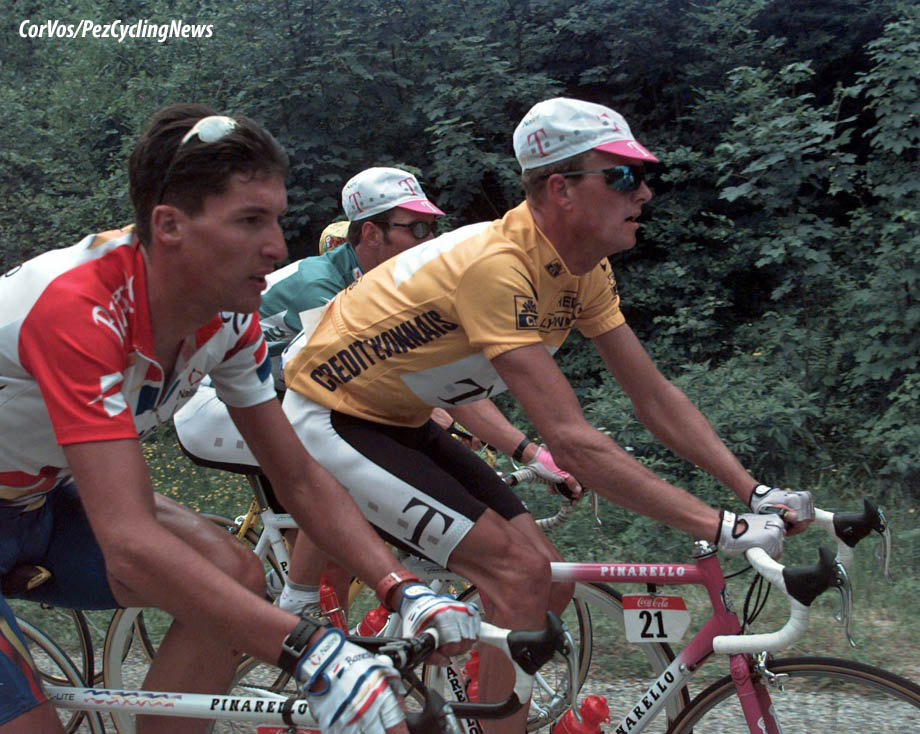 He was known throughout the world as ‘El Chava’ why? Chabacano was the nickname of his family in El Barraco, although he always wrote it with ‘Chava’. Not the nicest of nicknames: Ordinary, vulgar, rude or bad-mannered – take your pick. 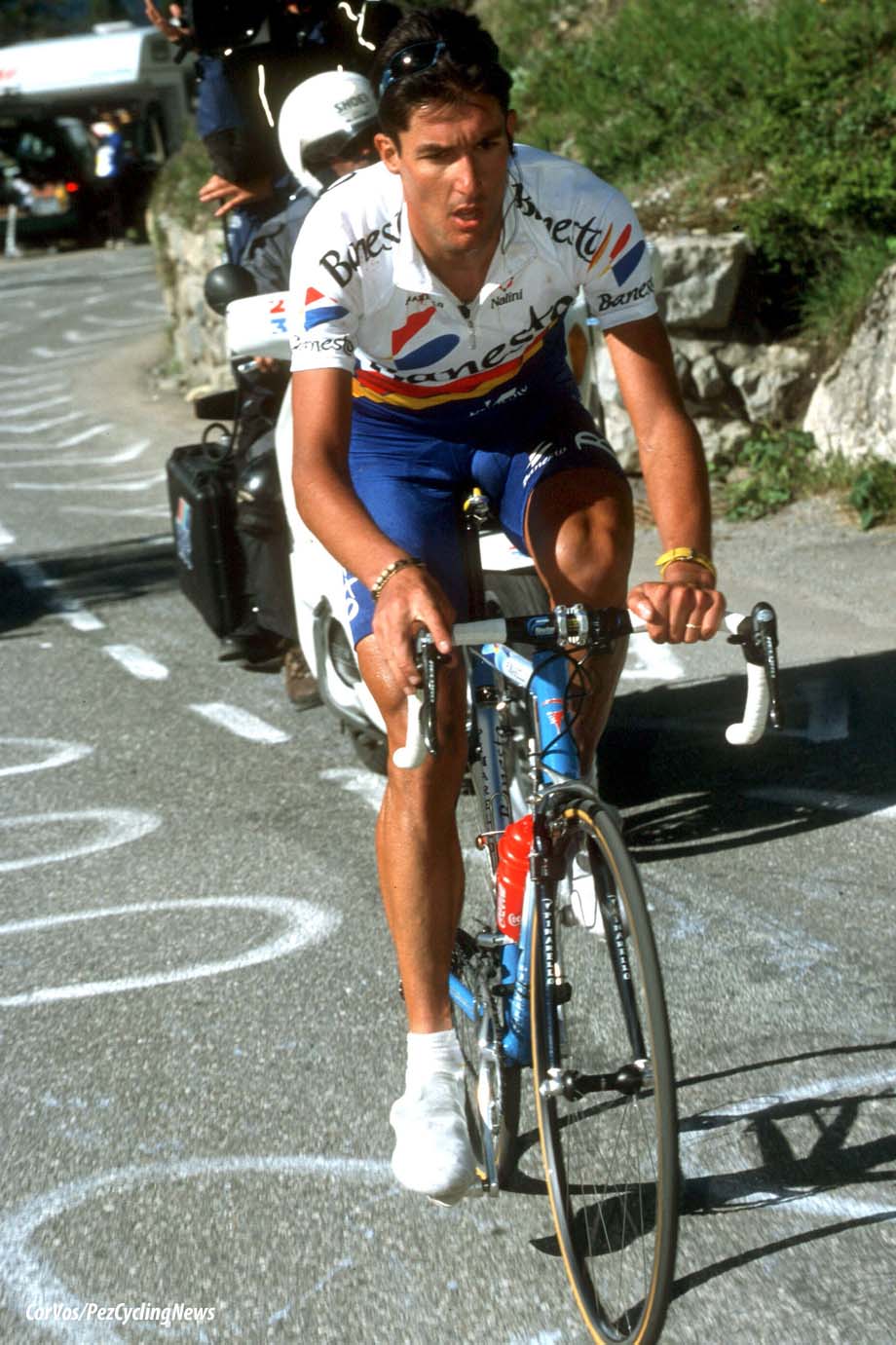 Going solo in the Tour 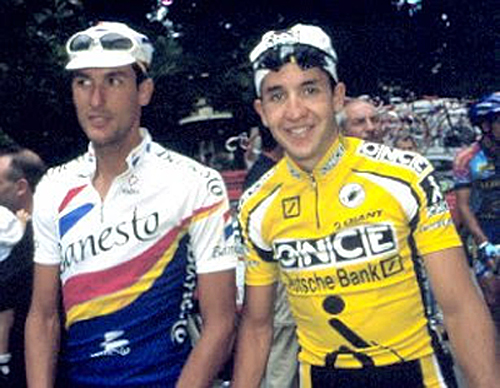 # You can read about Alex Zülle HERE.

A dedication to ‘El Chava’