Worlds Retro Roadside: The last World road championships that Ed Hood attended were in Ponferrada, Northern Spain where he filled his camera’s memory. On his journey home he picked out his favourite photos from behind the scenes and on the Spanish roadside for this unique selection of shots. 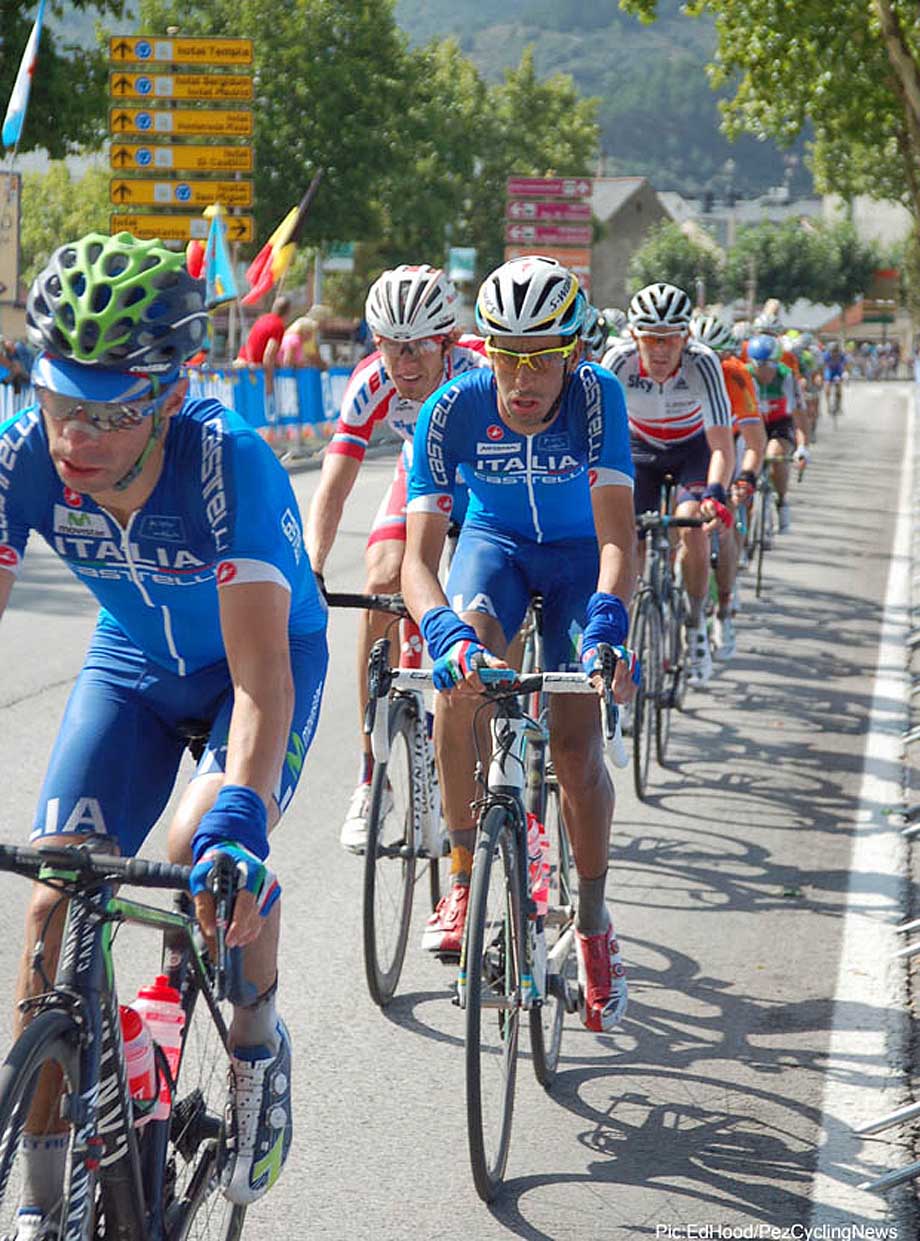 We took something like 400 pictures over some nine hours on Sunday at the Elite Championship; it seemed a shame not use more of them. Here’s a highly personal look back at my ‘men of the Elite Worlds’ – in alphabetical order to avoid cries of ‘favouritism!’

With a stage win and a podium finish in the Giro and two stage wins and fifth on GC in the Vuelta, at 24 years-of-age Fabio Aru (34th) is being touted as Vincenzo Nibali’s natural successor. But for all that he’s still proud to be part of the azzuri and play his part in trying to manoeuvre Nibali and/or Colbrelli into position. 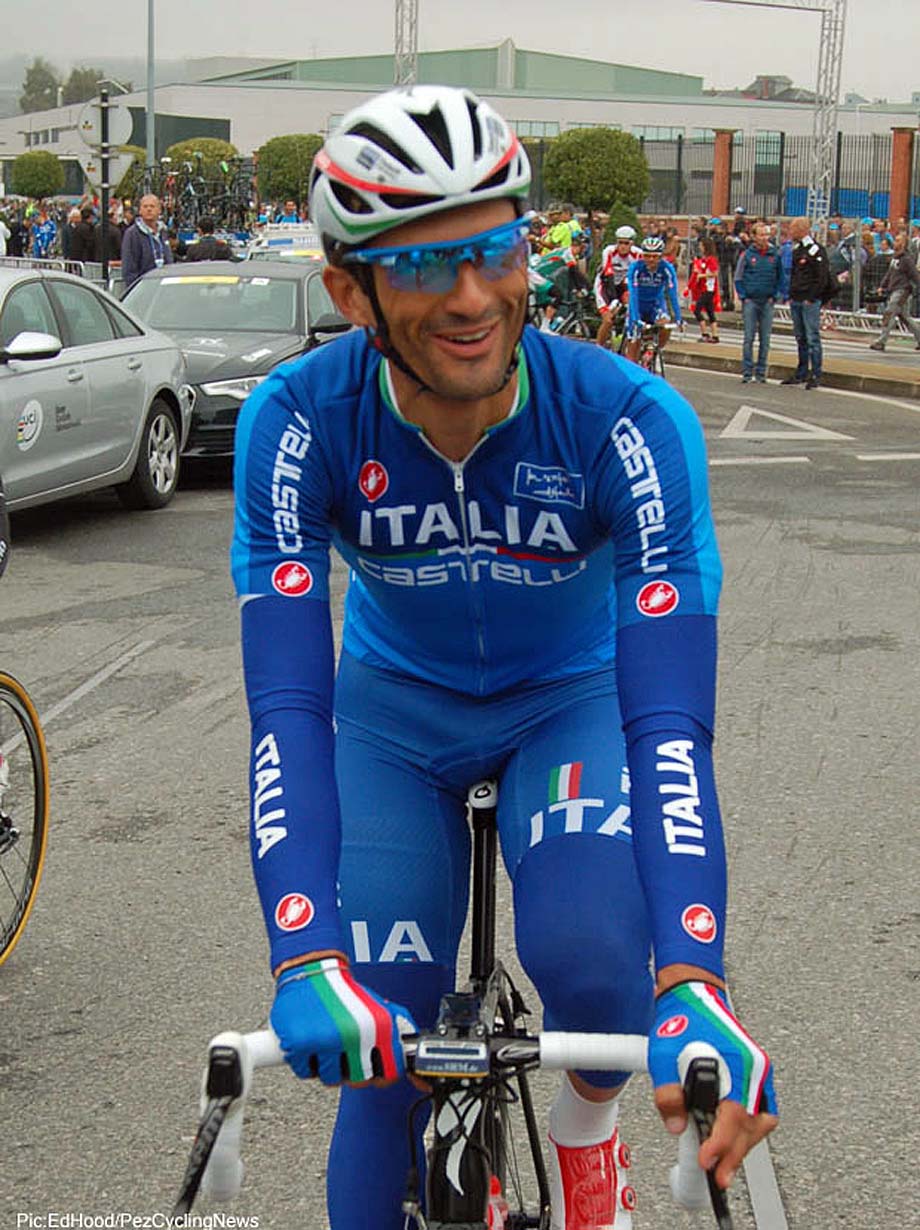 Daniele Bennati (21st) is another of the azzuri, formerly one of the fastest finishers in the world with Giro, Tour and Vuelta stage wins he’s re-invented himself as a domestique par excellence in the service of Alberto Contador at Tinkoff. Capable of setting a killing tempo for kilometre after kilometre and keeping his Capo out of trouble he worked hard on Sunday – but like Aru, it was in vain with Colbrelli Italy’s best in 13th spot. 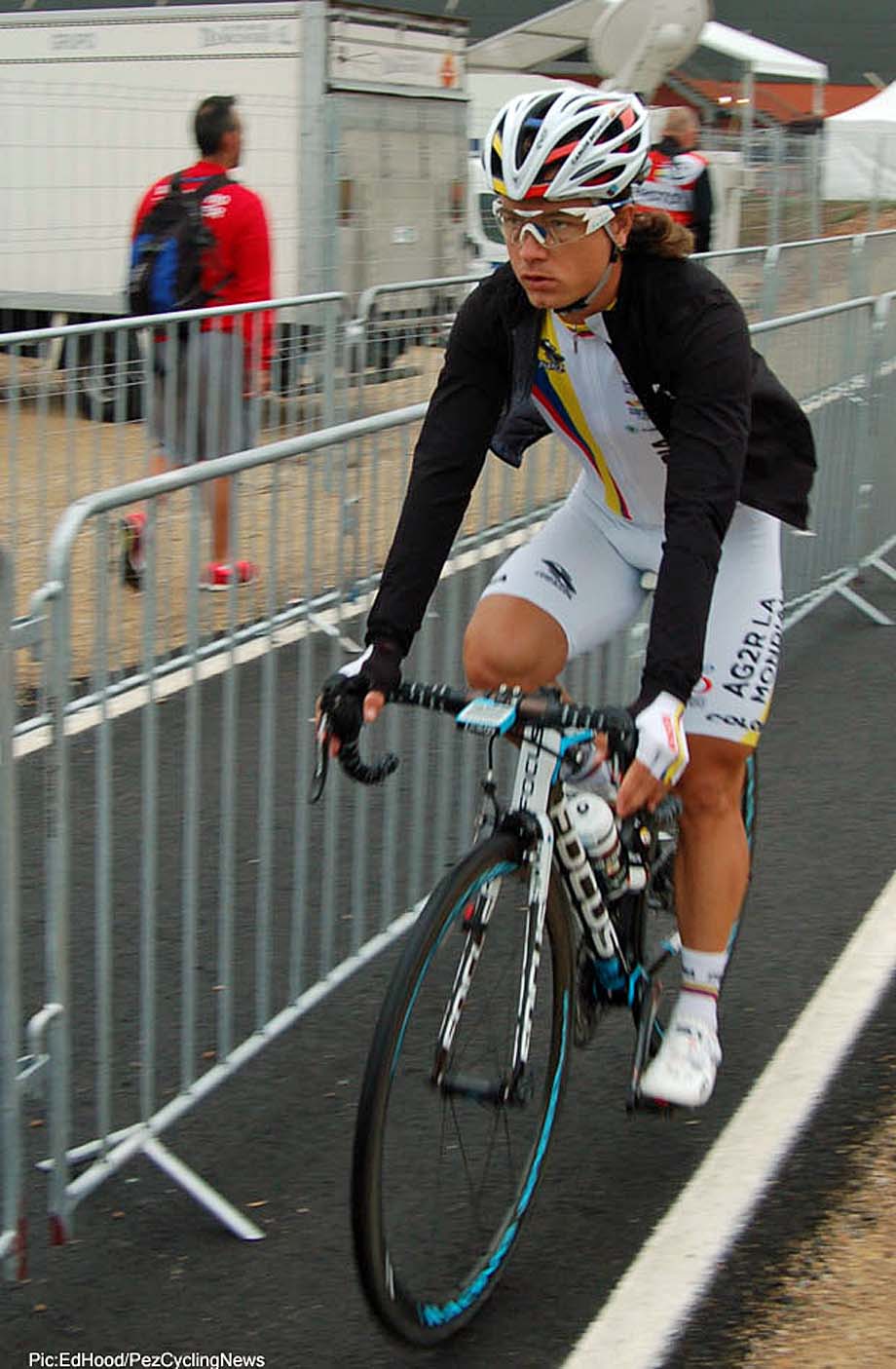 Columbia’s Carlos Betancur (DNF) was well in the mix in the 2013 Florence Worlds and started 2014 in fine fashion, winning the Tour of Haut Var and Paris-Nice. He then disappeared back to Colombia and couldn’t be coaxed back for le Tour – victim of alleged illness – but was back for the Vuelta where he occupied stone last position in the peloton for most of the race. We thought that perhaps all that misery was part of a build-up for the Worlds, alas no and Betancur was one of 109 categorised as DNF. 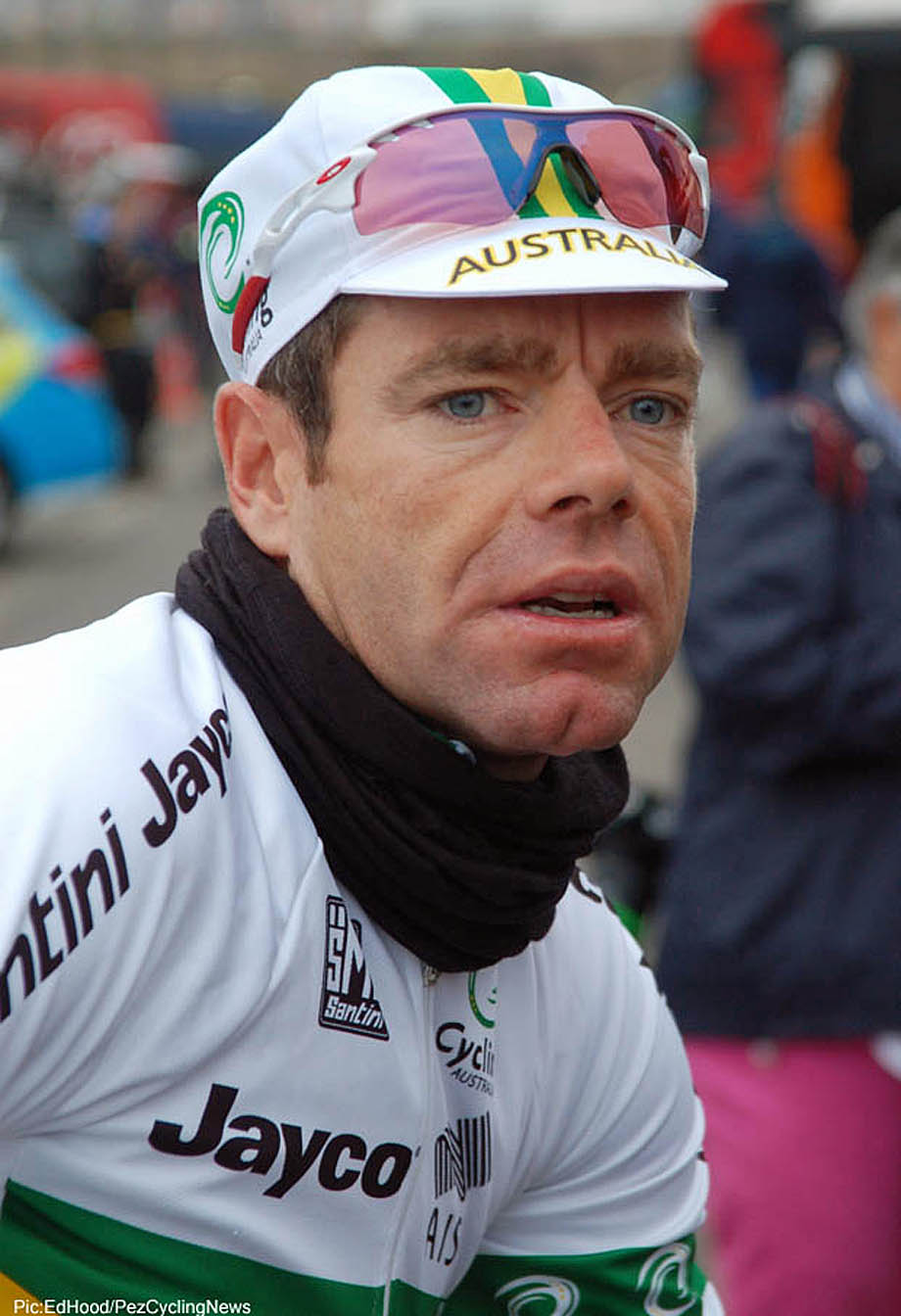 Now justifiably labeled an Aussie ‘legend’ as the first man from the Antipodes to win the Worlds and Tour de France; Cadel Evans (DNF) has also been on the Giro and Vuelta podium. This season saw him win the Giro del Trentino, take two stages in the Tour of Utah and wear pink in the Giro; so it’s been by no means the dreaded, ‘one season too many.’ He’s quitting very near the top – but it was perhaps inevitable that he’d be DNF in his final Worlds. 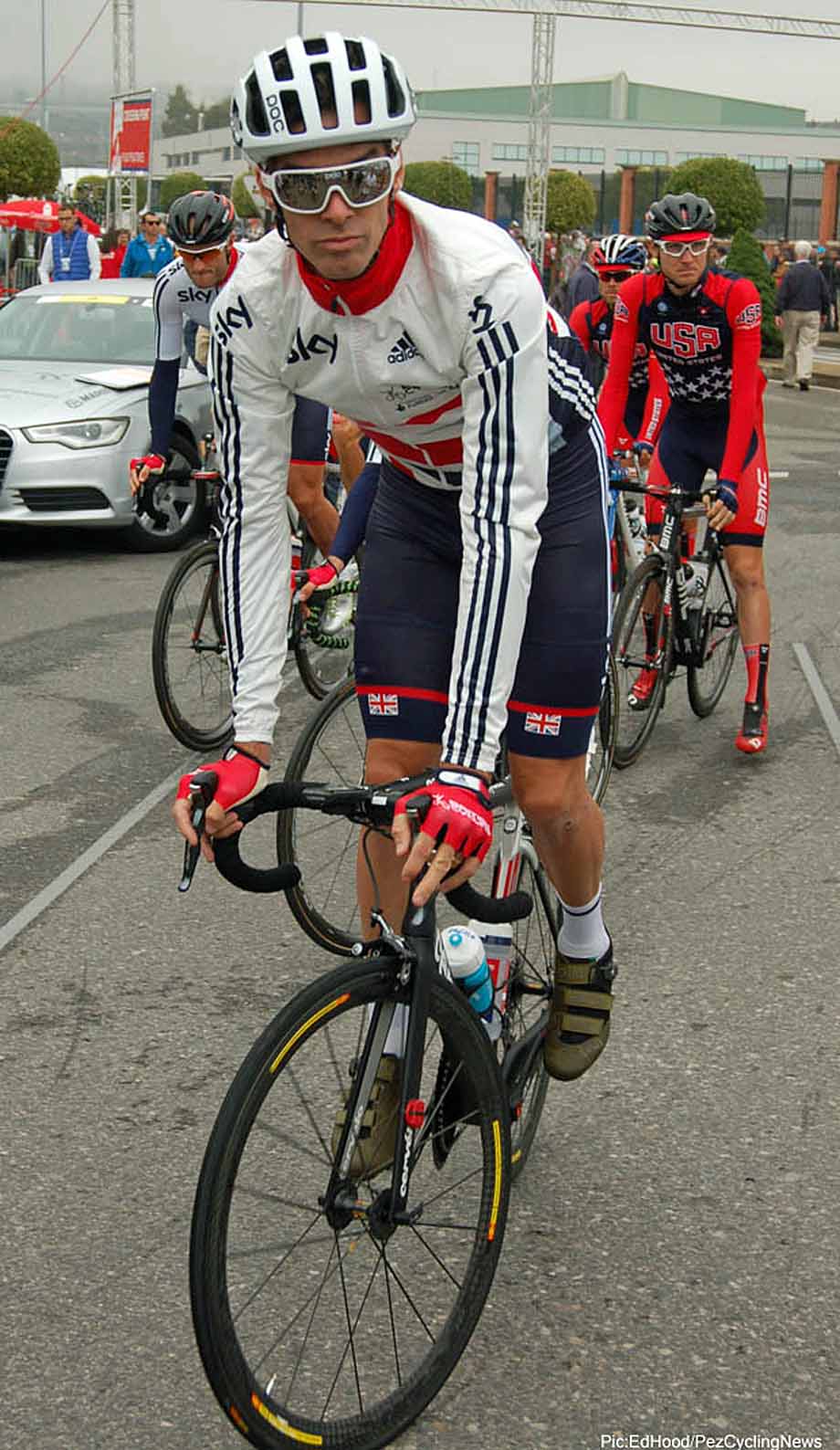 Scotland’s David Millar (DNF) at his best was pure class, tall, slim, immaculate, the perfect position on the bike, the smooth flow of the pedals, poetry in motion – he could climb, sprint and was one of the world’s best time trial riders. He’s held the leader’s jersey in all of the Grand Tours, been on the podium of the Worlds TT as well as winning the Commonwealth Games TT, the Chrono des Nations, the British Pursuit, Road Race and TT Championships and time trials in many major stage races including le Tour. Here’s the ‘but,’ 2014 was the dreaded ‘one season too many’ and despite all the fuss about his non-selection for le Tour, Garmin were right not to select him – the form just wasn’t there.

It was no surprise he was DNF in Ponferrada – but we’ll miss you, David. 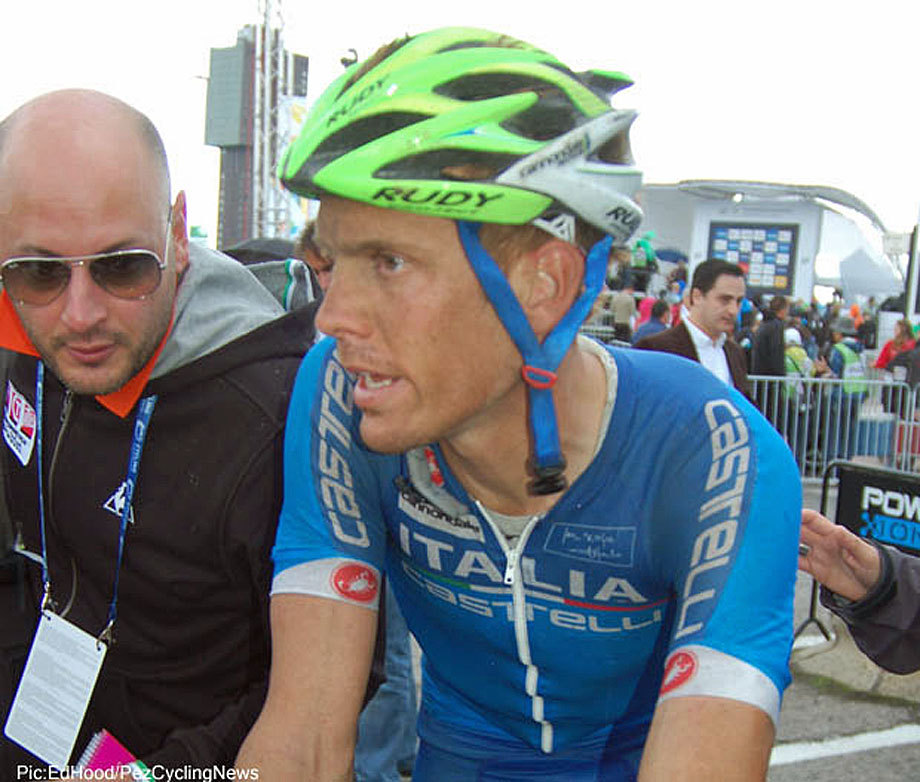 Yet another Italian; there’s no team the Worlds means more to than the Italians, it’s still an honour to make the squadra and wear the sea blue of Italia. Alessandro De Marchi (45th) is all the things an Azzuri should be – big, strong, smart and aggressive. He was the most combative rider in le Tour and a stage winner in the Vuelta. If I was the Italian team manager and De Marchi was in a break of four in the finale of the Worlds, I’d have happily let my chips ride on him and certainly not used his team mates to help negate the move. The big chap’s face at the finish showed how he felt about that decision. 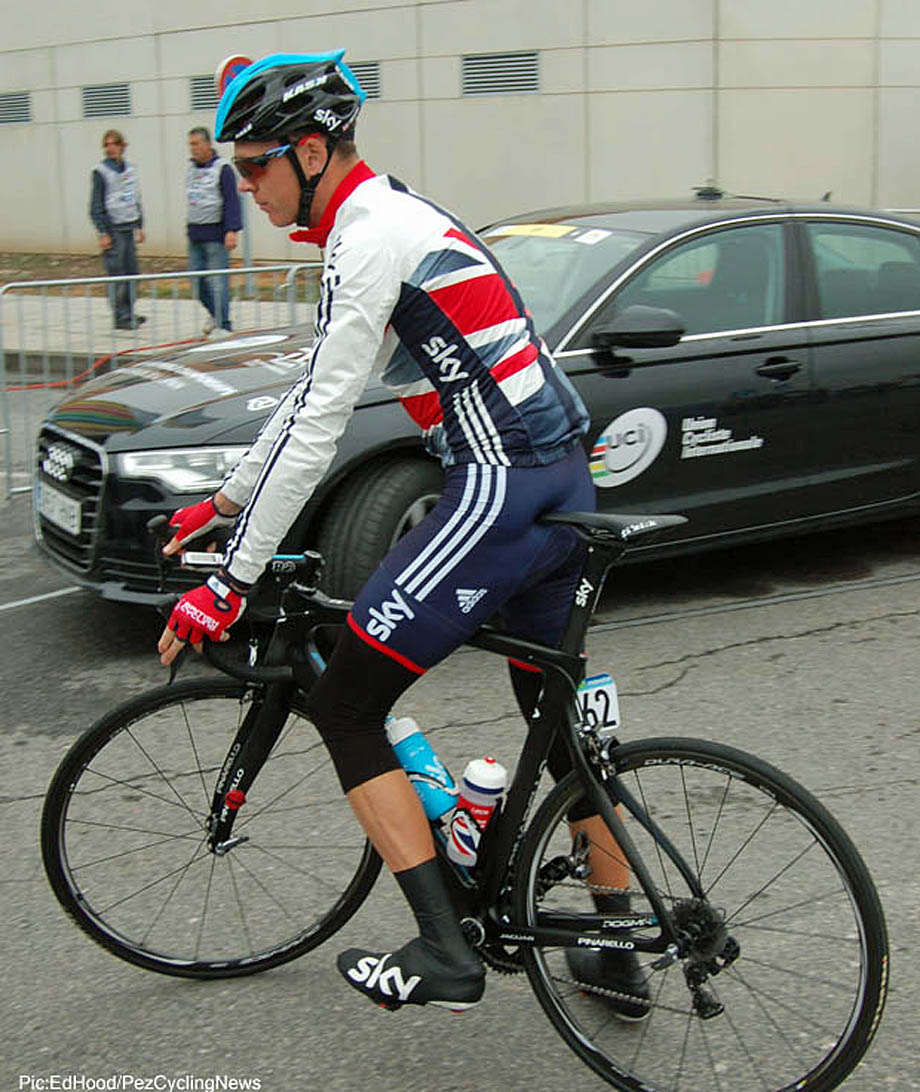 One of only a handful of riders in the world who can win a Grand Tour, Christopher Froome (DNF) was well received by the tifosi at the start. But it’s doubtful that his frail form should have made the start line for this cage fight – it was always going to be DNF for the 2013 Tour winner. 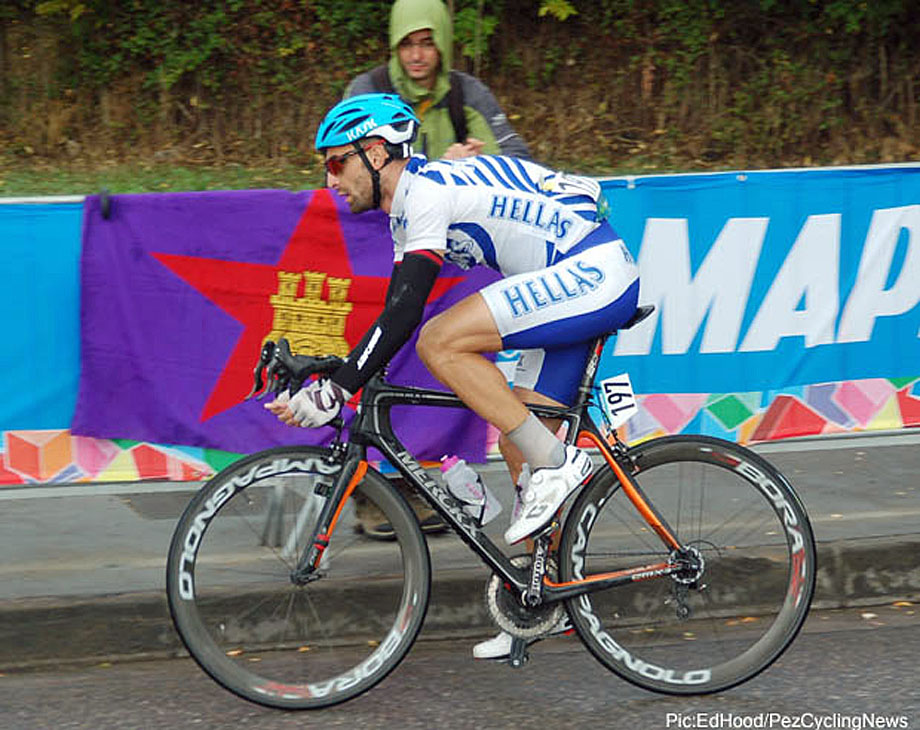 Some may say; ‘what’s that Greek dude doing wasting his time like that?’ I say, ‘respect!’ to Georgios Bouglas (DNF) who’s Greek Road Race Champion and rides for Continental SF Tableware back home – he enlivened the those early laps and did sterling work for his sponsors. 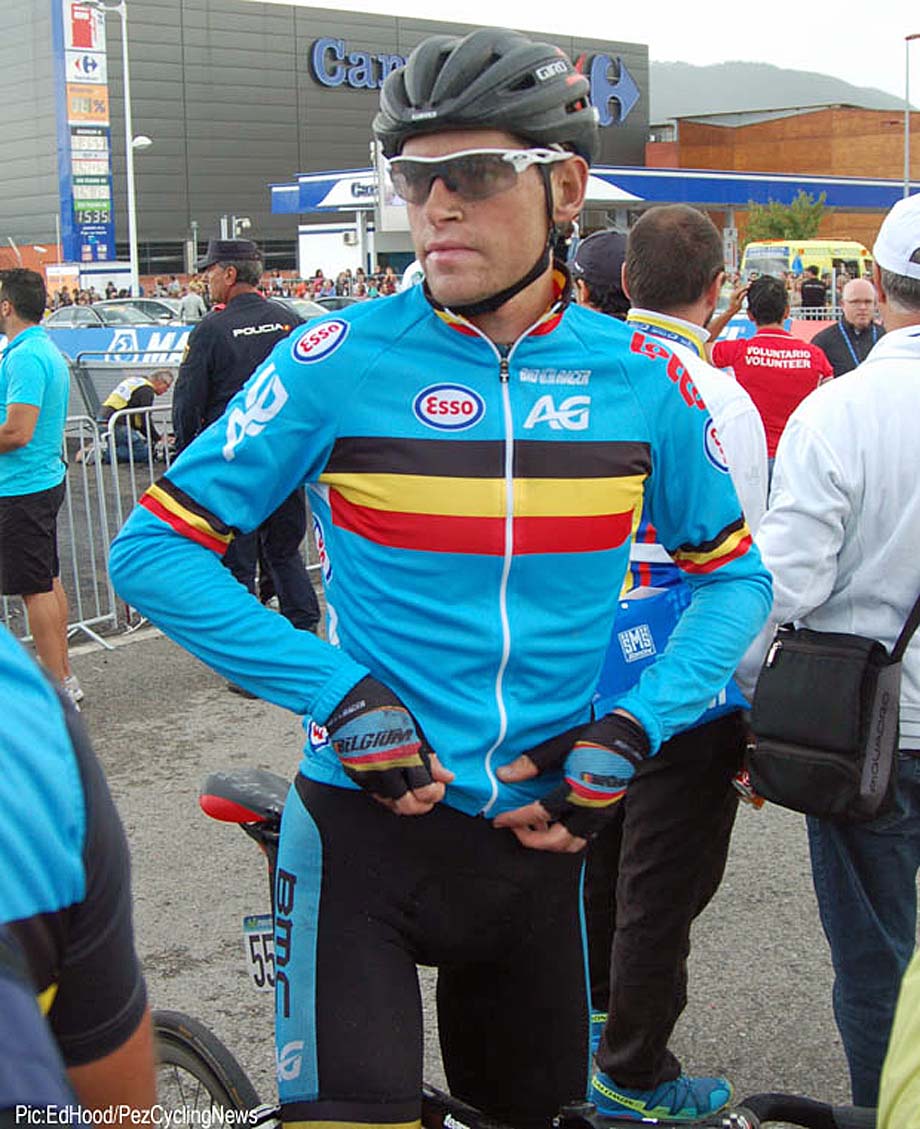 Belgium fielded a very strong team for these Worlds, a blend of hard working domestiques and potential winners including Gilbert and Greg Van Avermaet (5th). But the tactic in the finale seemed confused, was GVA working for Phil Gil or vice versa? They finished fifth and seventh, but like Gilbert says, ‘winning is all that counts at the Worlds.’ 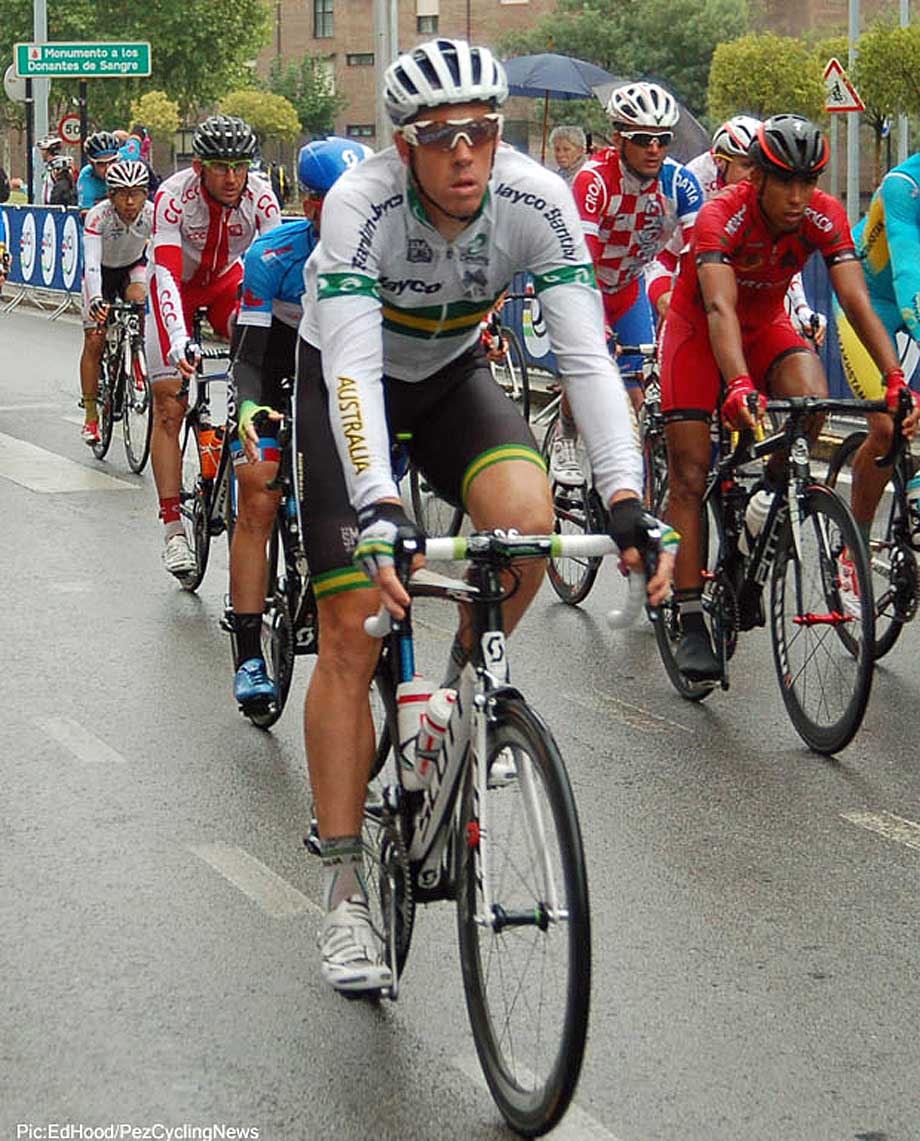 Matt Hayman (DNF) has the T-shirt, the pro’s pro, super domestique but not without his own successes – he won the Commonwealth Games Road Race don’t forget. The closing phase of the Elite race wasn’t dissimilar to that of the U 23 race, two days before. 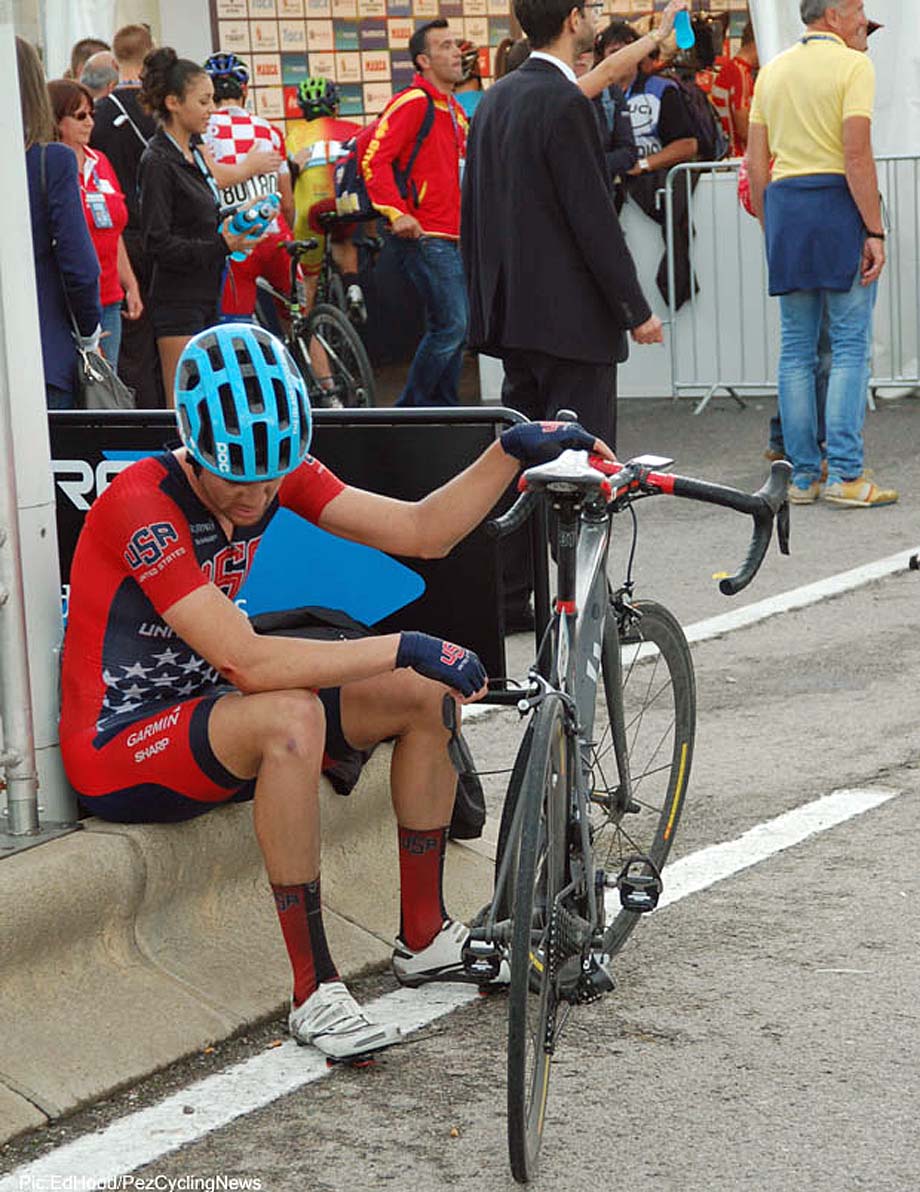 The disappointment of ‘what could have been’ and shattered dreams show in this shot of the USA’s Alex Howes (30th) right after the finish. Howes was in great form out of the Tour of Colorado but a late crash and then the sheer ferocity of the finale conspired to leave him thinking about how it’ll all be different next year, in Richmond. 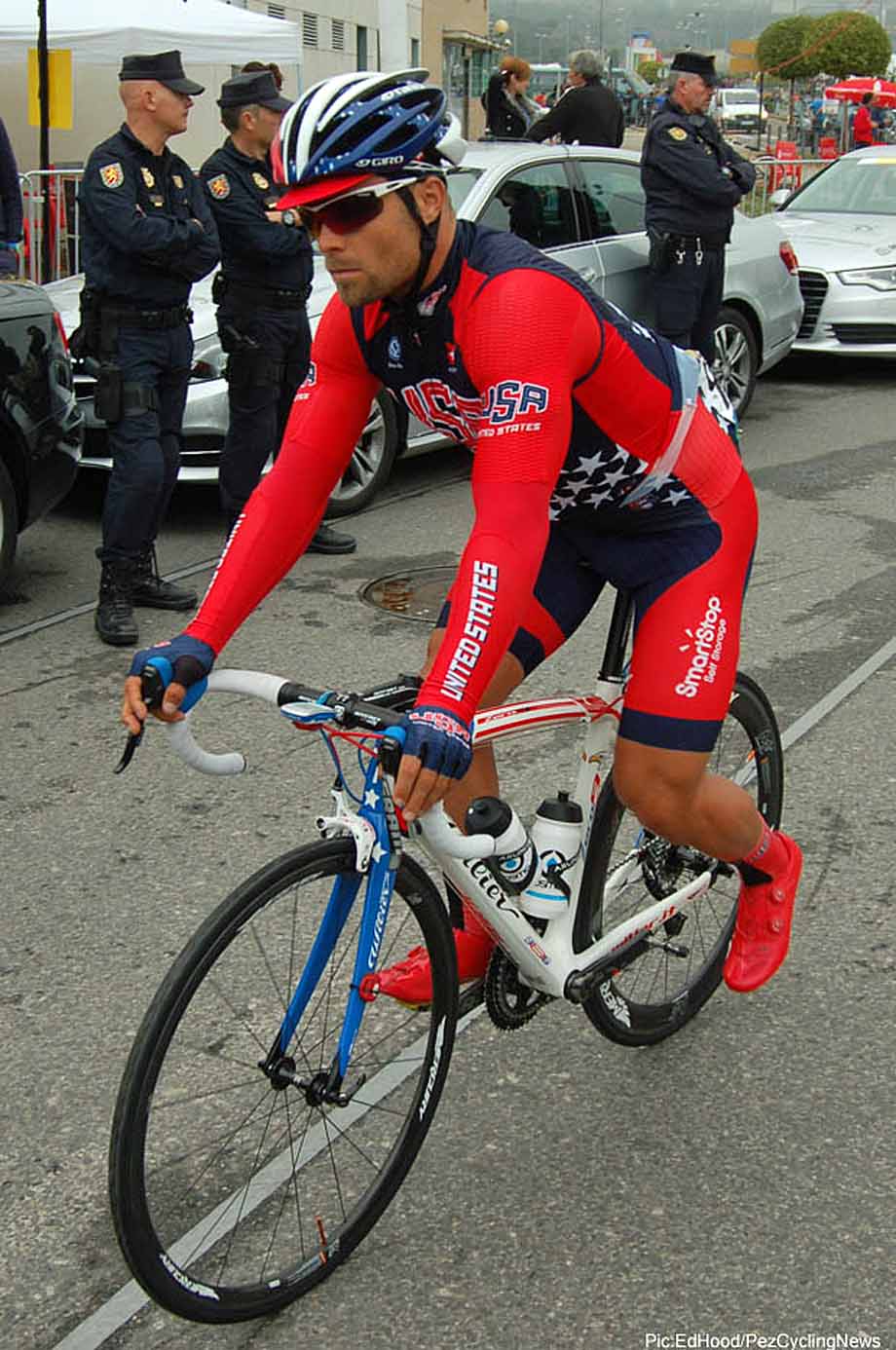 In the USA, if you win the National Champs then you have a ticket to the Worlds. Eric Marcotte (DNF) is the man who gets to wear the stars and stripes for 2014/15 and was on the start line in Ponferrada. He looked nervous at the start – and had every right to; the US domestic scene is a long way from the battle to survive and prevail that is The Worlds. 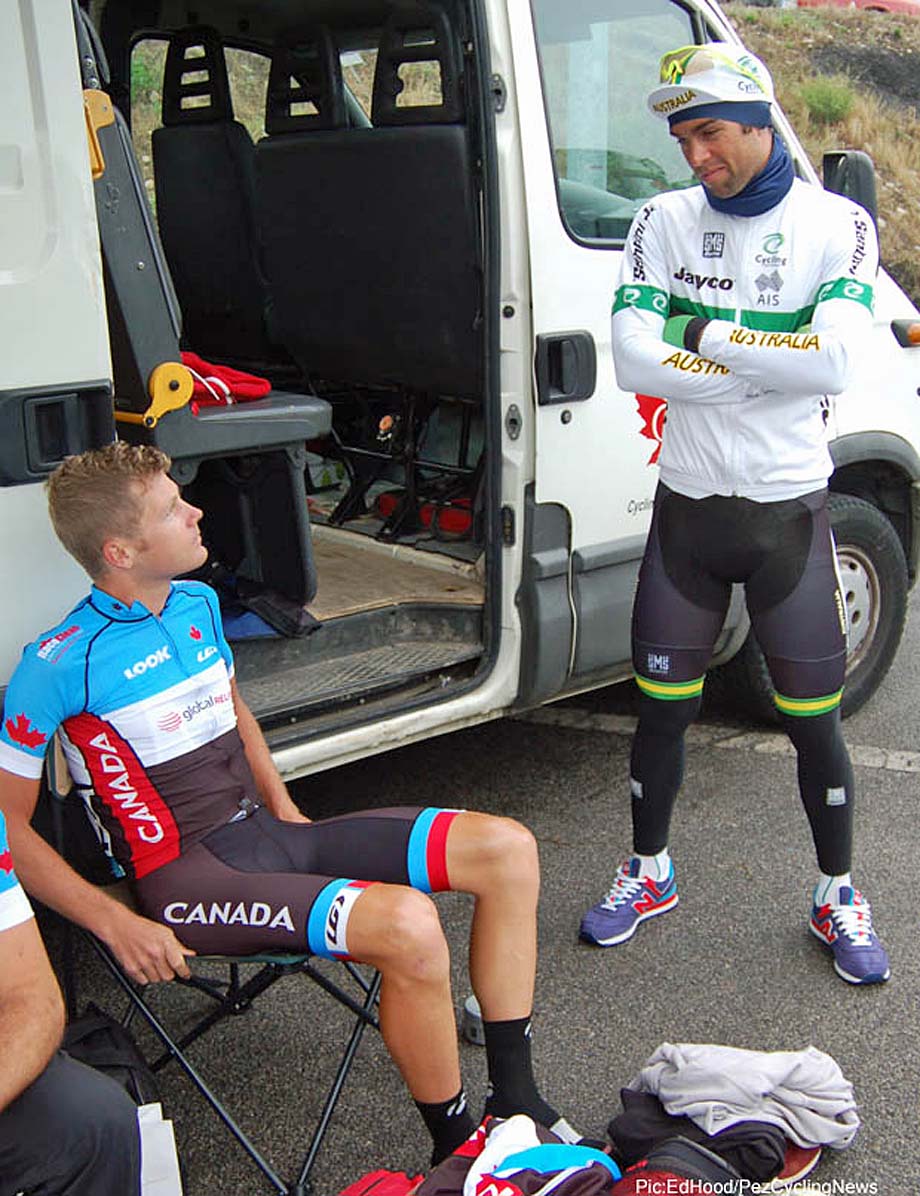 The Aussies started the race with not one but two favourites, Gerrans on the back of two sparkling wins in Canada and the precocious and brilliant Michael Matthews with stage wins and leader’s jerseys in the Giro and Vuelta to his credit, this season. The ever-smiling Matthews was in the elite group at the end and finished 14th – it bodes well for the future. 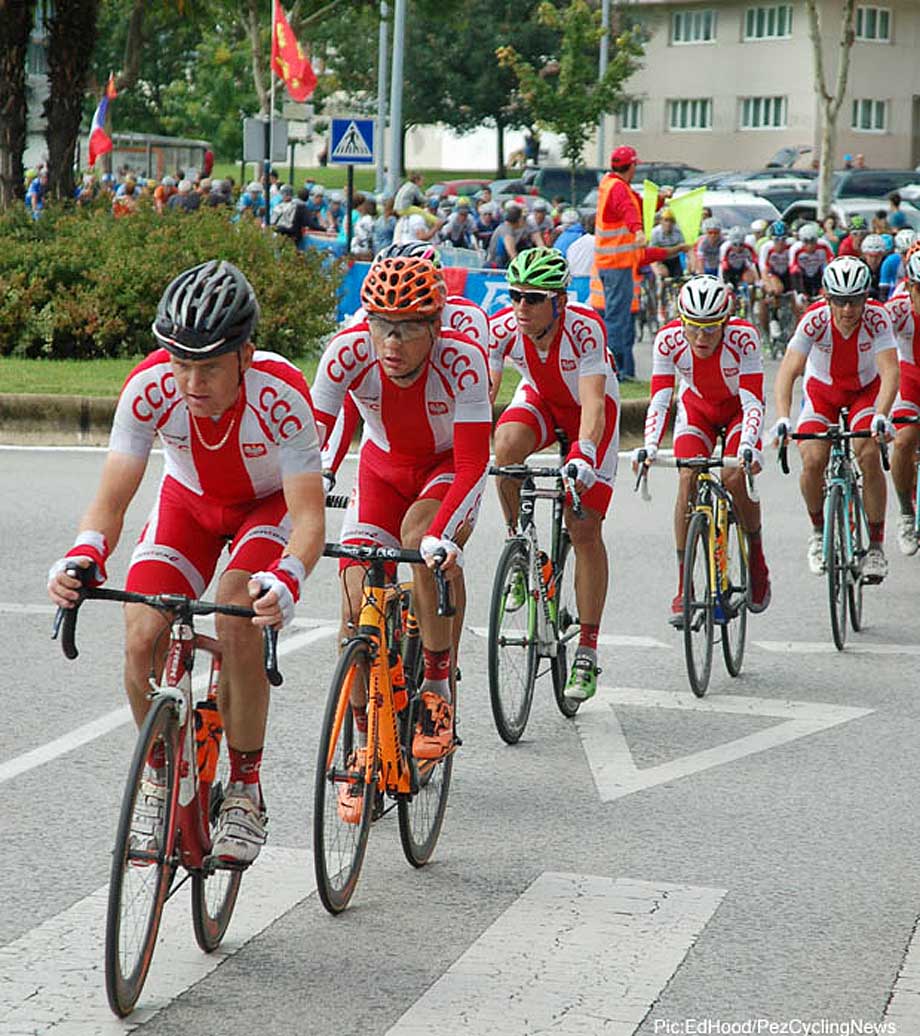 But this day belonged to one nation, Poland. When I saw them lining out and driving the thought did flash through my mind – and apparently it was major forum fodder – that they were in the pay of another nation. But then I glanced at my start sheet; ‘Kwiatkowski, of course!’ I thought to myself. A magnificent job from the tough looking men from the East – some of whom only ride at Continental level – lap after lap they ground it out with no looks back for help.

Hard core, committed, they reaped the fruits of their labours. That doesn’t always happen in cycling, ask the Aussies and Italians. 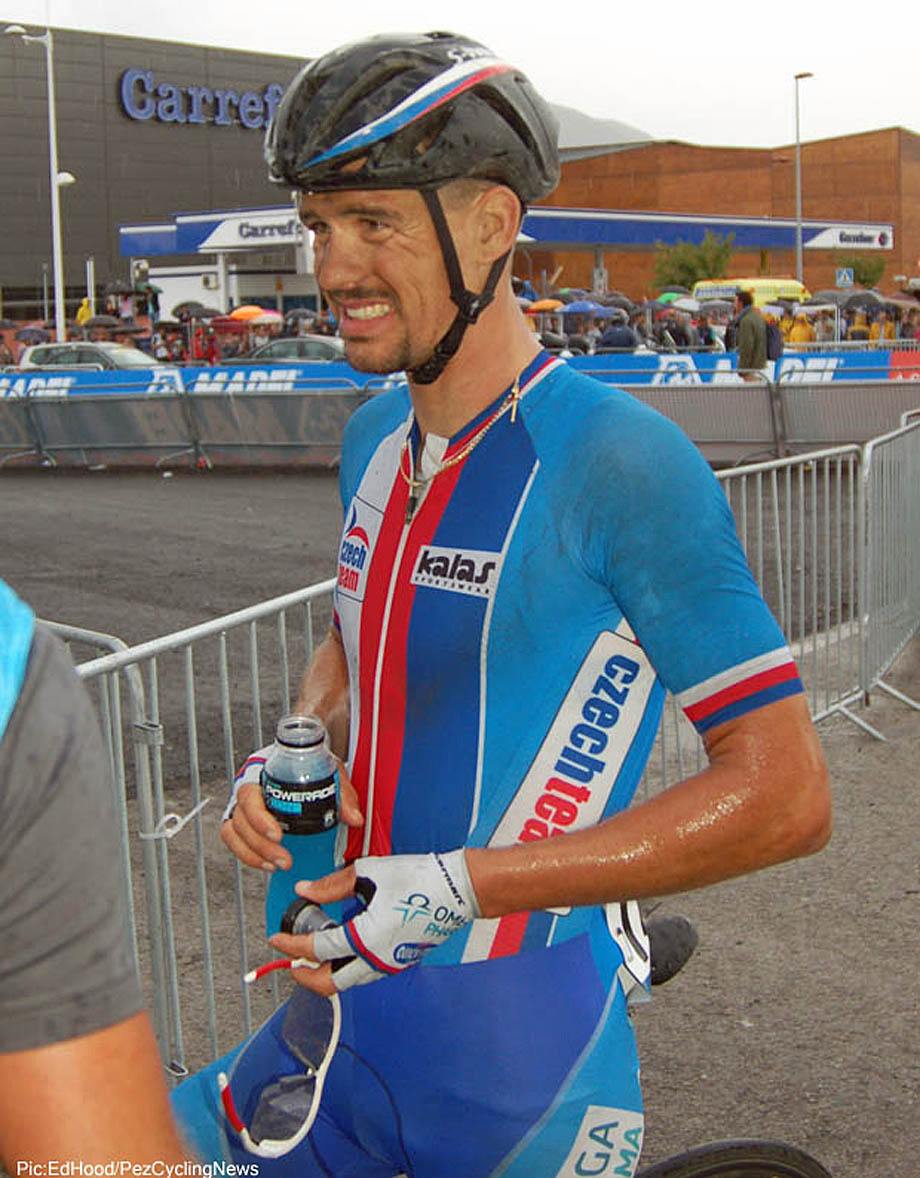 Not since the days of the De Vlaemincks has there been a World Cyclo-cross Champion like Zdenek Stybar. Another member of the insatiable Quick-Step team which is now on 63 UCi road wins, this season. Although he was ‘only’ 83rd he finished the race mere weeks after that horrific ENECO Tour crash which left him in a hospital bed. 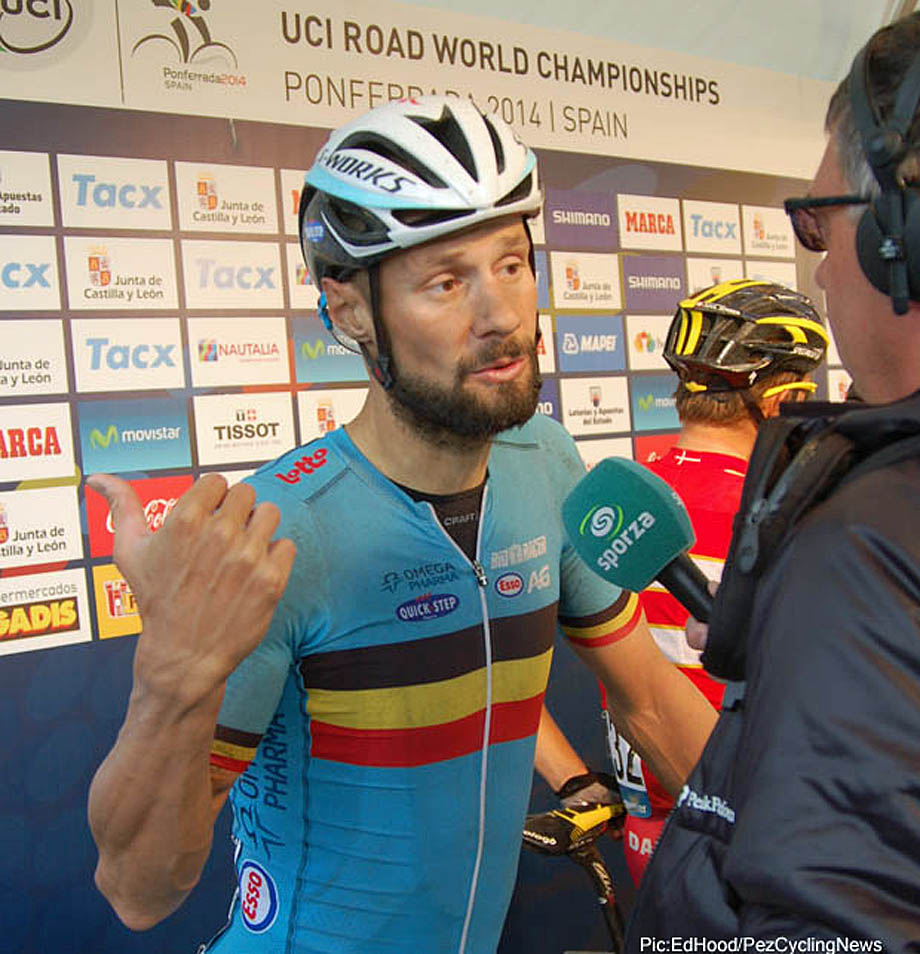 I hate to say it and I’m still a huge fan but I think ‘Tornado Tom’ Boonen (49th) has won his last Worlds, despite his slenderness and positive talk, Old Father Time is creeping up on him. It would have been unthinkable not to select him for these Worlds but maybe next year the selectors should be looking more to youth? 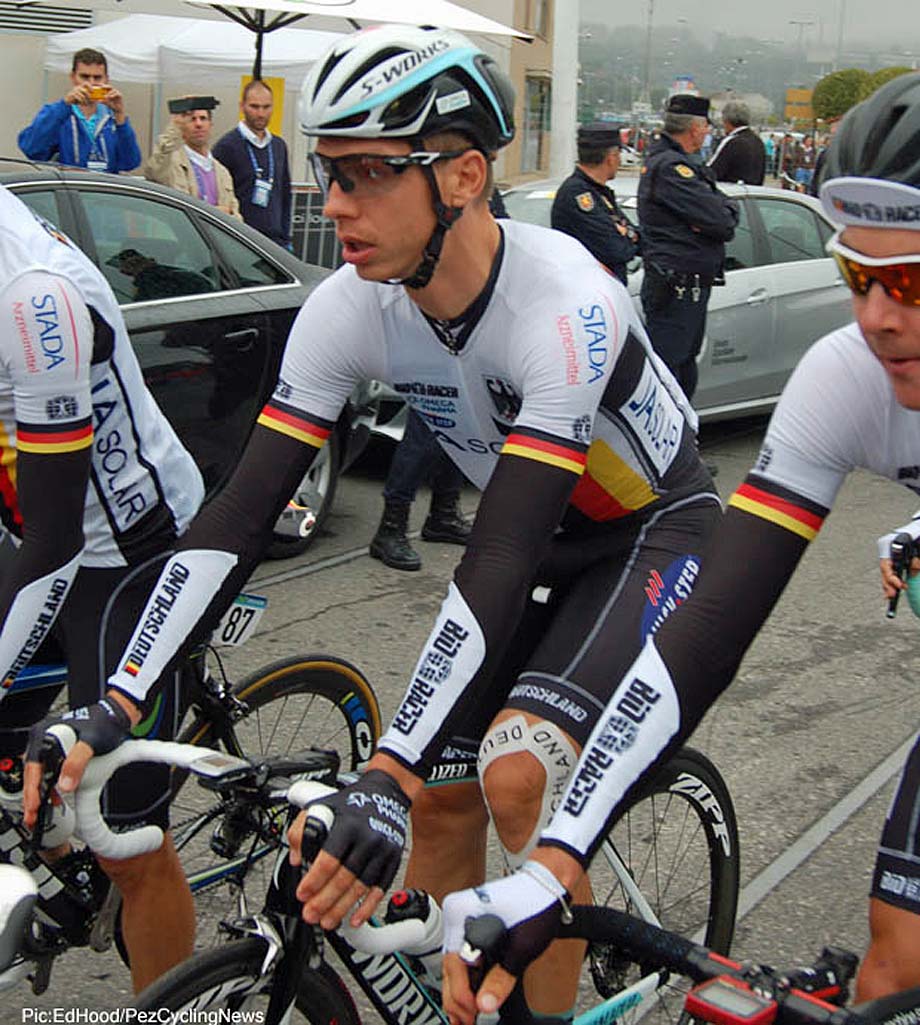 That man Tony Martin must be tired – whilst Wiggins did more or less what he liked to prepare for the one hour effort of the time trial, where it’s just about all down to numbers, Tony Martin rode the Tour and Vuelta – hard. He didn’t finish these Worlds but was up the road in the rain, late to take the pressure off German team hope, John Degenkolb. It wasn’t to be but Martin once again earned plaudits for his selfless riding. 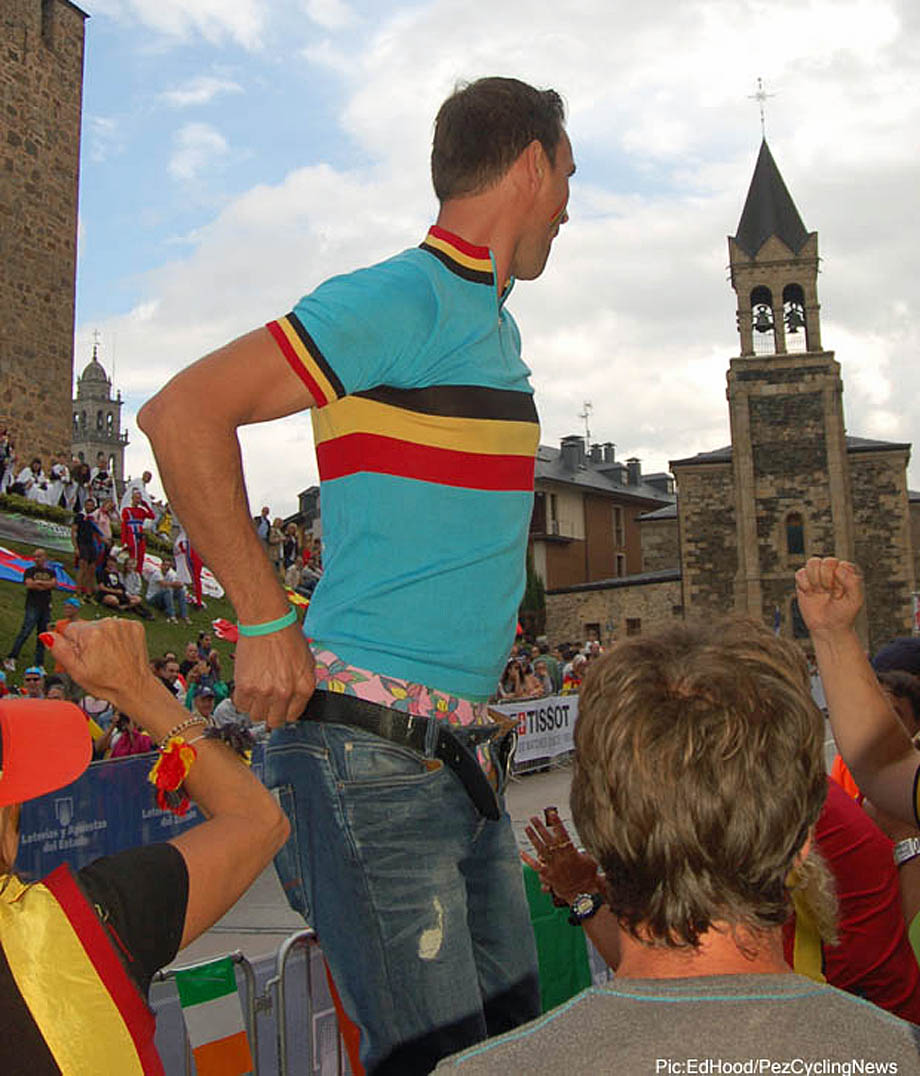 And to close, a man whose name we don’t know; but between the break and peloton’s passing decided that the crowd at the Castillo needed entertained – with a striptease. . .

It was November 2005 when Ed Hood first penned a piece for PEZ, on US legend Mike Neel. Since then he’s covered all of the Grand Tours and Monuments for PEZ and has an article count in excess of 1,600 in the archive. He was a Scottish champion cyclist himself – many years and kilograms ago – and still owns a Klein Attitude, Dura Ace carbon Giant and a Fixie. He and fellow Scot and PEZ contributor Martin Williamson run the Scottish site www.veloveritas.co.uk where more of his musings on our sport can be found.
Like PEZ? Why not subscribe to our weekly newsletter to receive updates and reminders on what's cool in road cycling?