World Road Championships Retro: It’s hard to keep track of the events that Ed Hood has attended – easier to count those he has missed. His first Worlds for PEZ was in Salzburg back in 2006, no team time trial in those days, the event didn’t return until 2012, but Ed was there for all the other road action, here is his stroll down memory lane.

It was way back in 1983 when I attended my first Worlds – Goodwood in the south of England, but it wasn’t till 2006 before I covered the Worlds for PEZ. The series that year was in beautiful Salzburg, Austria. Here are a few memories from what was a great Championship more than a decade ago to put you in the mood for the 2018 Worlds as they return to Austria, this time in Innsbruck. 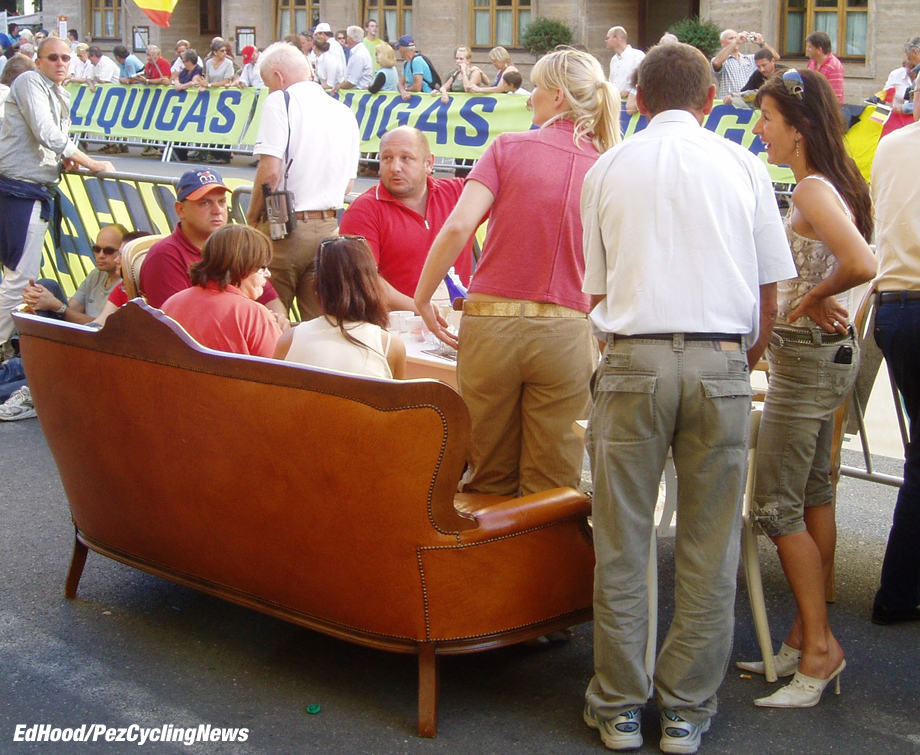 There were not many sofas beside the roadside at the 2016 Worlds in Doha – the cliché is that ‘the riders make the race.’ But so do the fans and particularly the Belgians at the Worlds… with pils. 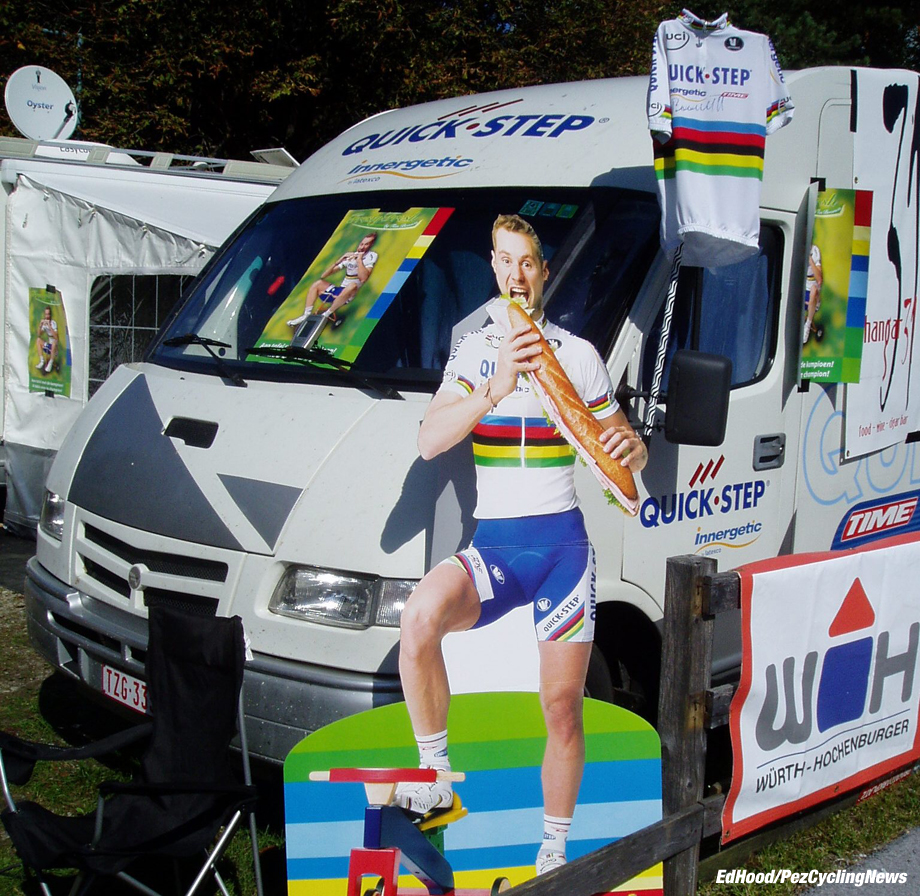 Salzburg is pretty central in Europe and the French, Italian – and Belgian fans were all there complete with life size cut-outs of Tommeke munching on a sandwich.

I spoke to a couple of totally wasted Belgian guys late on the Sunday night after the Elite race; “do you get a coach home now?” says me. “Oh no! We drive the car home now, directly!” 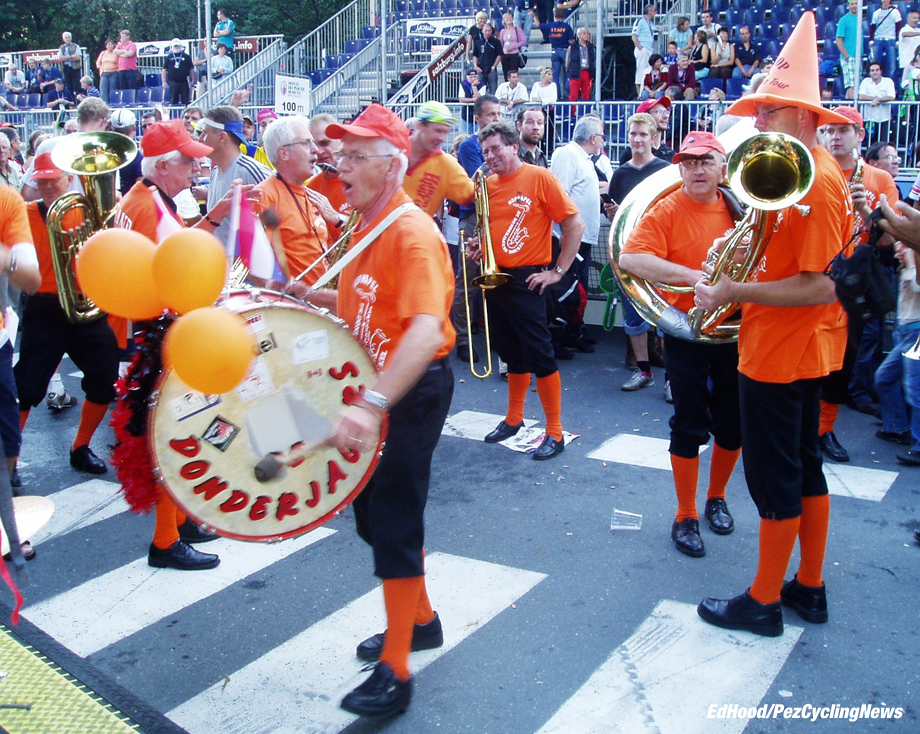 And those Dutch fans do like their ‘oompah’ band – once you’d had a few beers they sounded fine. 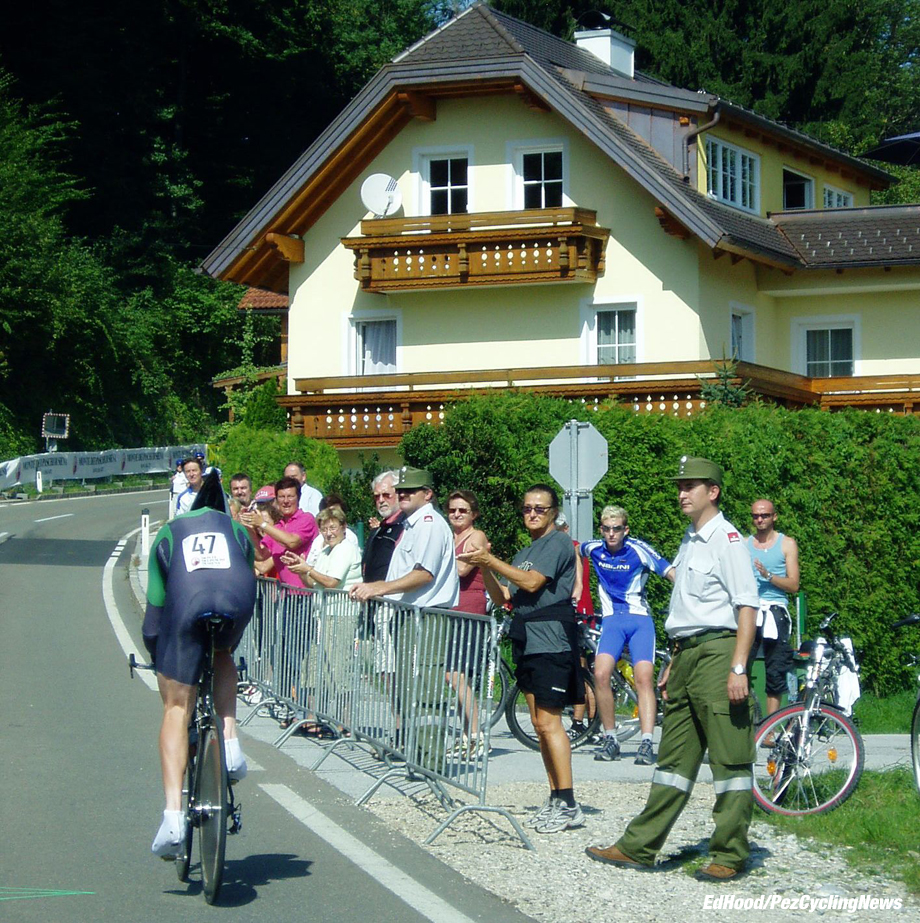 The first race of the series I covered was the Elite Time Trial and was lucky enough to follow Ireland’s David O’Loughlin over the beautiful, rolling but technical and tough parcours.

The Irishman would finish 30th on the day. 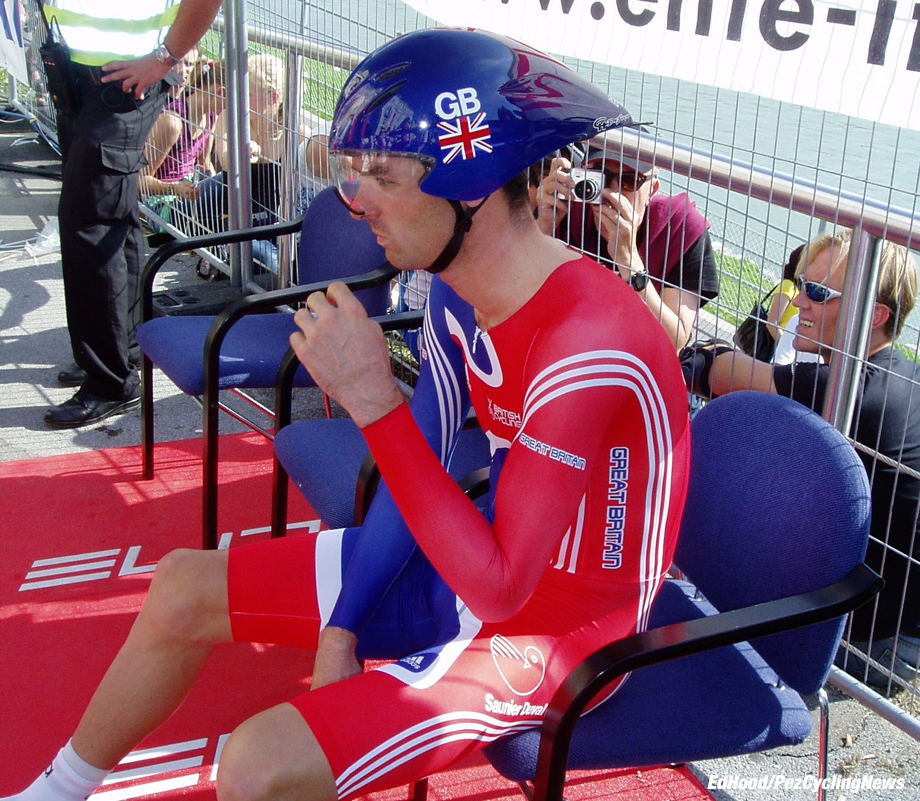 David Millar was back from the wilderness and rode to 15th spot behind the winner. Millar rode an unheralded but excellent road race in Salzburg, launching a late solo attack which took a lot of chasing down by The Bigs’ teams. He’d end the road race in 35th spot. 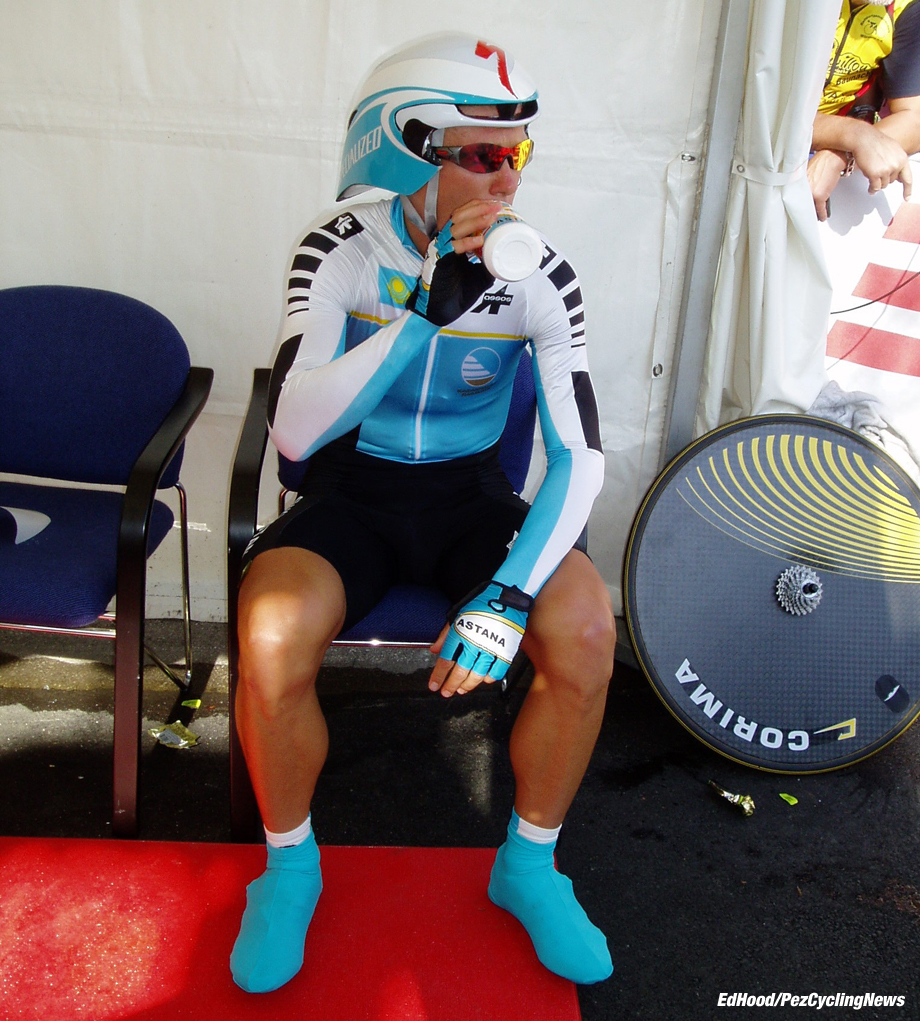 That controversial man Vino was in form and took the bronze behind the USA’s David Zabriskie and. . . 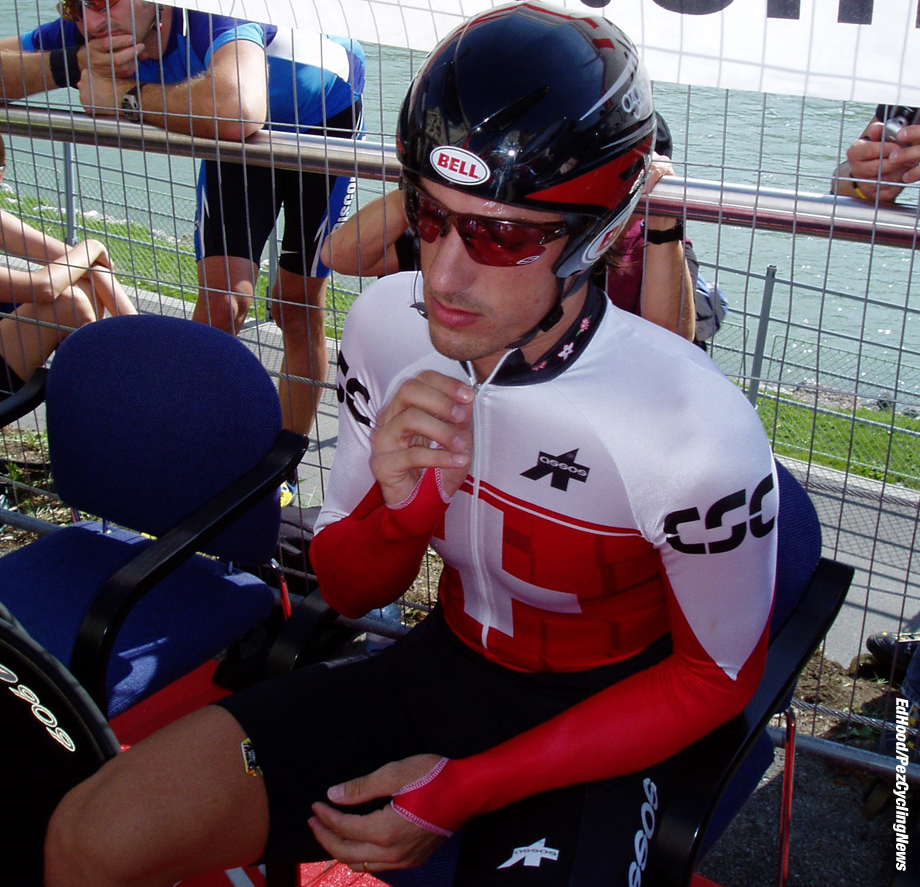 . . .behind the man who recently took his second Olympic Time Trial Championship – Switzerland’s Fabian Cancellara. THE time trial rider of his generation. 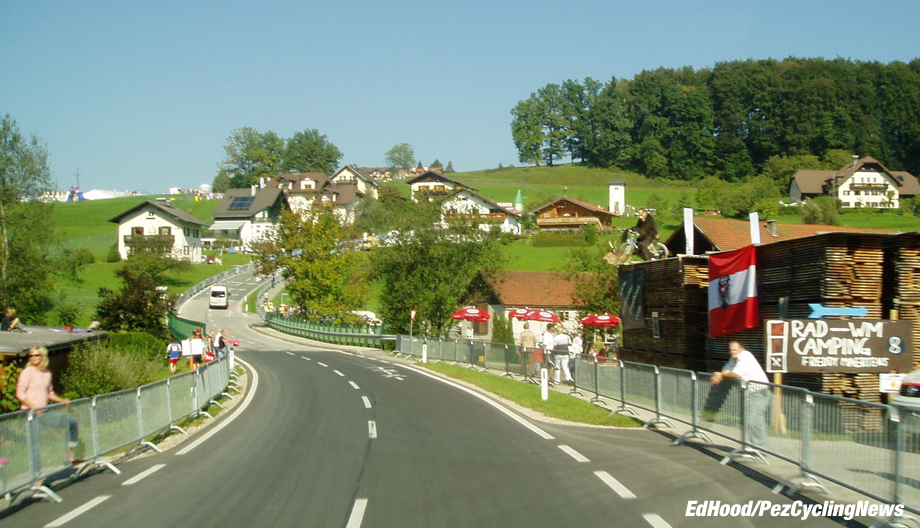 The parcours was well suited to big Suisse style, beautiful surfaced but rolling and technical – he ate it for breakfast. 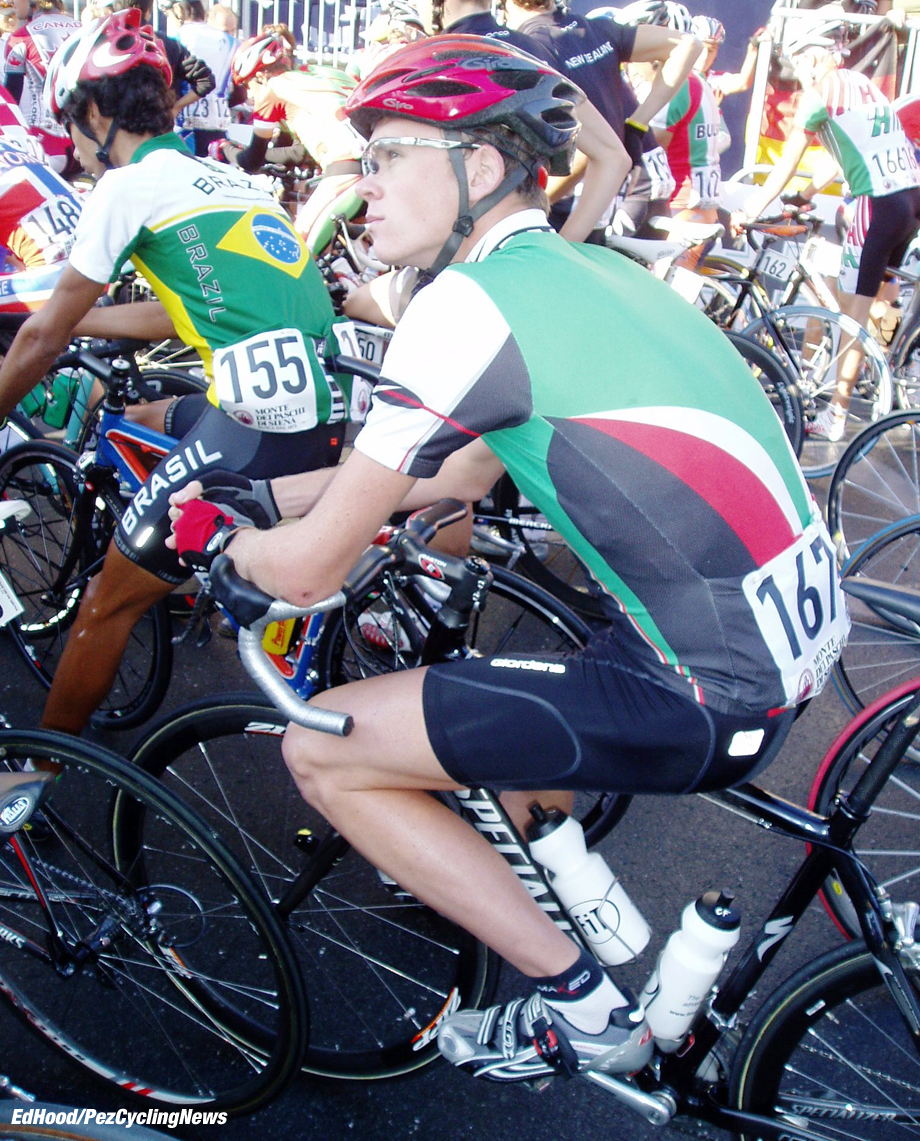 I often wonder what became of this chap – he was riding the next race I attended, the U23 road race. Christopher ‘something or other,’ all the way from Kenya. 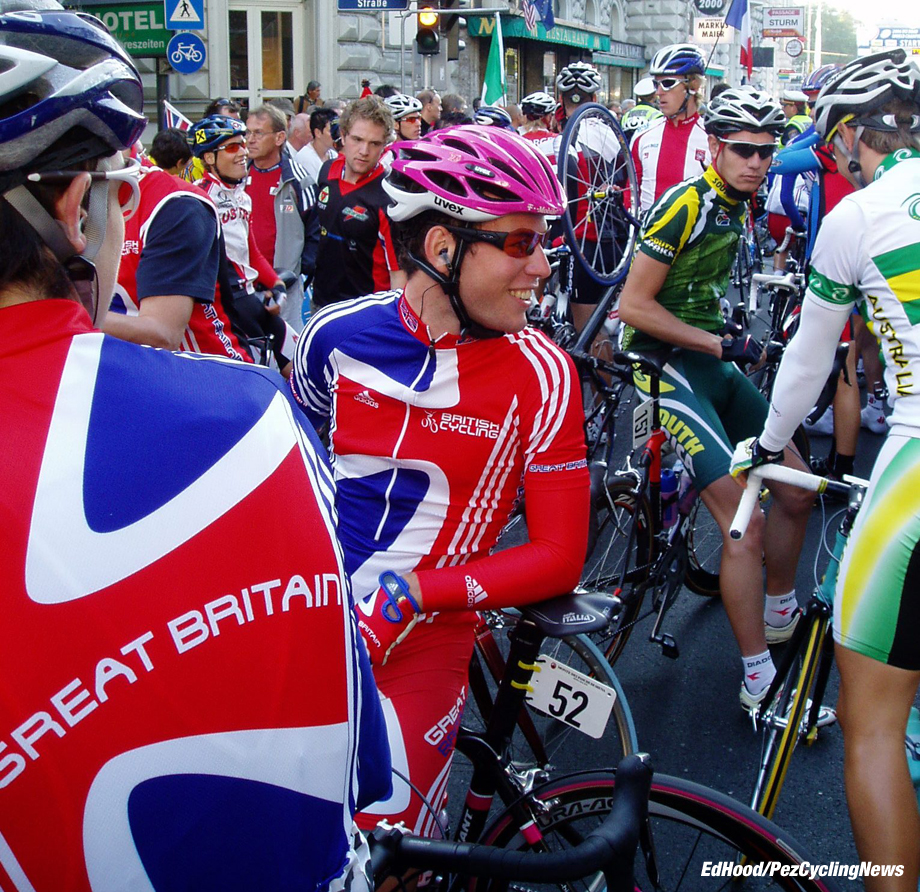 Some of his U23 GB team mates tried to make themselves as small as possible at the start in a ‘I wish was anywhere but here’ kind of way. Not Cav, laughing, showing off his Telekom crash hat so we’d all know he was a stagiaire with the German Super Team – you could see had ‘it.’ 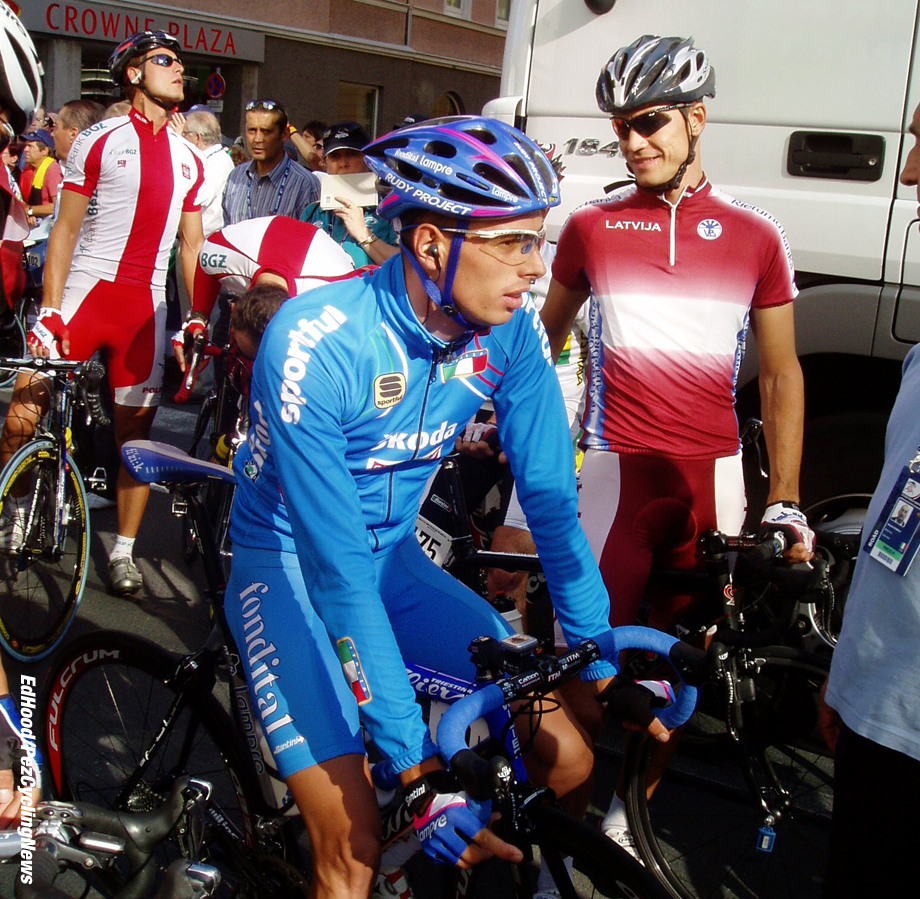 Then came the Elites – Alessandro Ballan didn’t win the 2006 Worlds, he’d have to wait until 2008 and Varese to do that, but he was classy and you could tell he was headed for the top. His run-in with the Italian Authorities over ‘doping’ is far from straightforward and many feel the big Italian has been singled out and made an example of. From future champions to past champions – Cipo was there, natch! The man drips with charisma and the women drop at his feet – when he retired the sport lost a big personality. 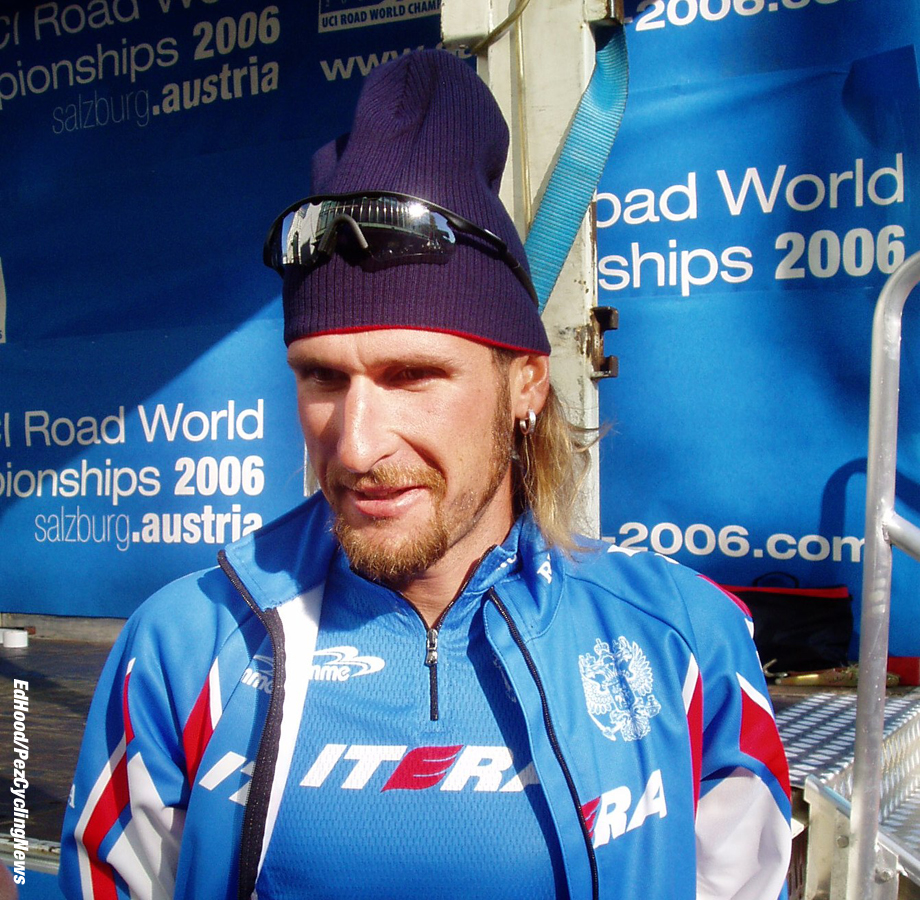 Despite it being a nice mild, sunny day in Salzburg, big Russian Vlad Karpets, like a good pro, was taking no chance and was wrapped up cosy – he did look a wee bit like a large garden gnome though. 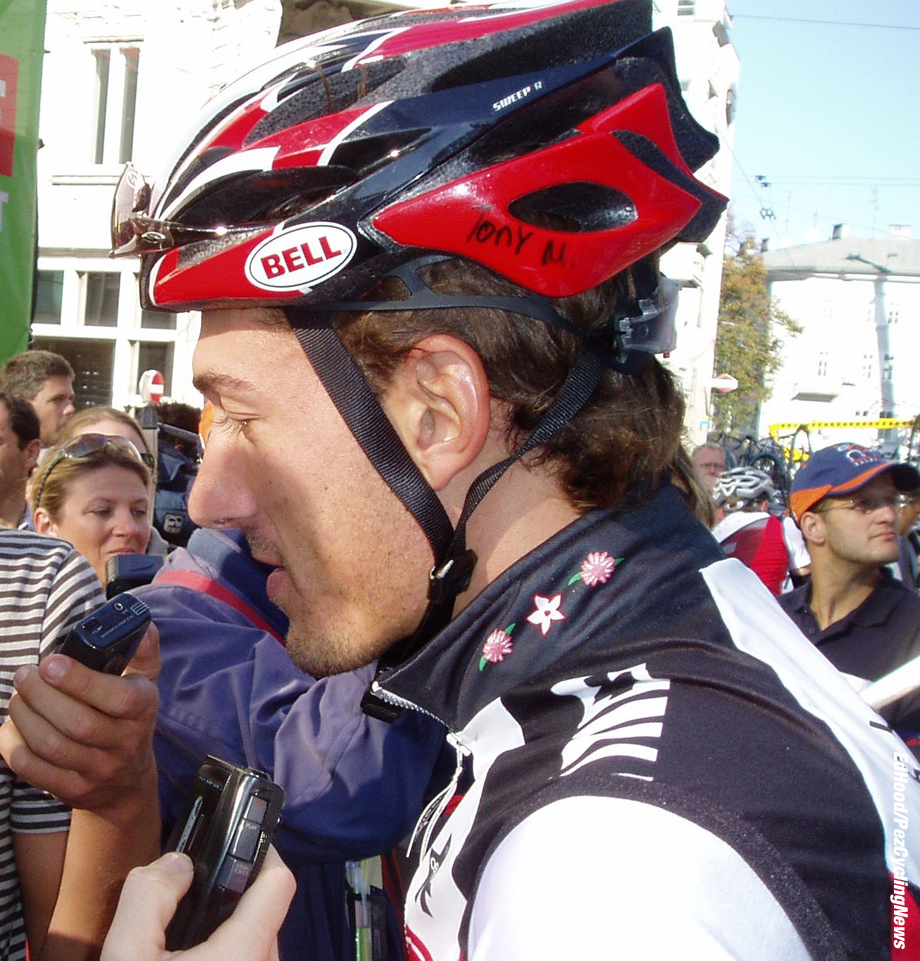 Naturally, Fabian Cancellara was a centre of attention with the media. One journo asked; “what are you hoping for today, Fabian?” To which the big man replied; “I am hoping for sunshine in the sky – and in my legs.” You wouldn’t get that reply from sir Brad. . . 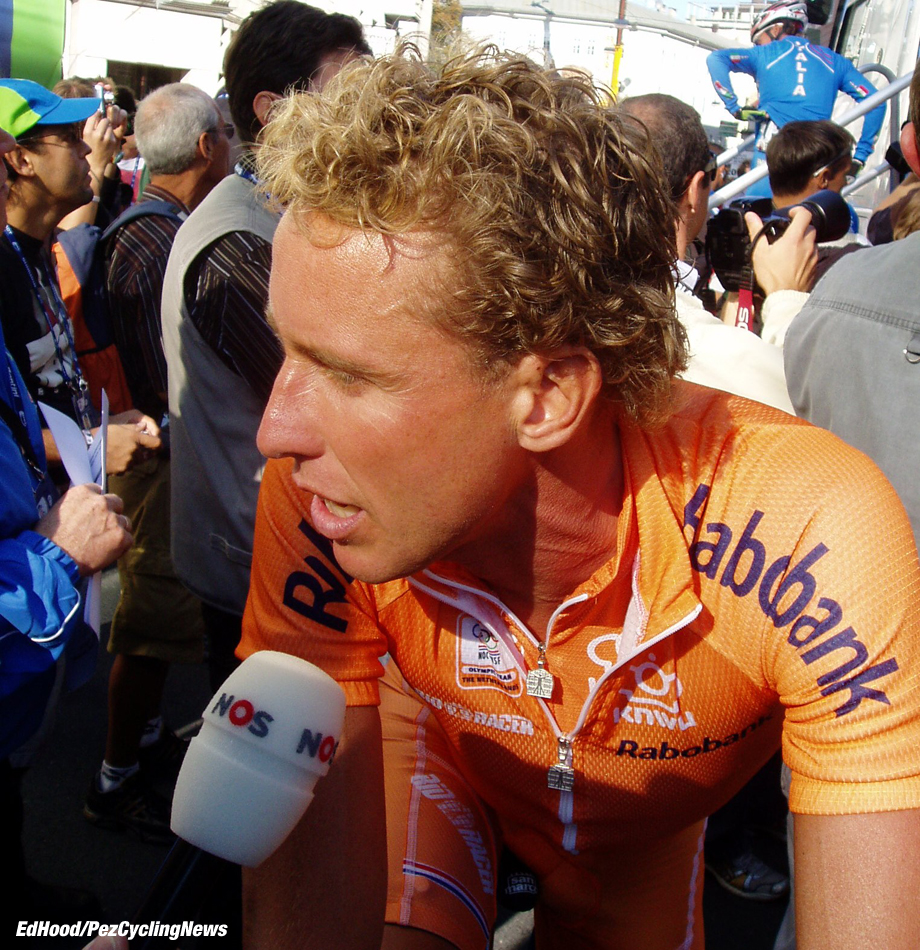 Michael Boogerd was a big favourite with the fans – and a favourite for the race. The 1999 Amstel winner’s skill set was well suited to the parcours but it wasn’t to be. 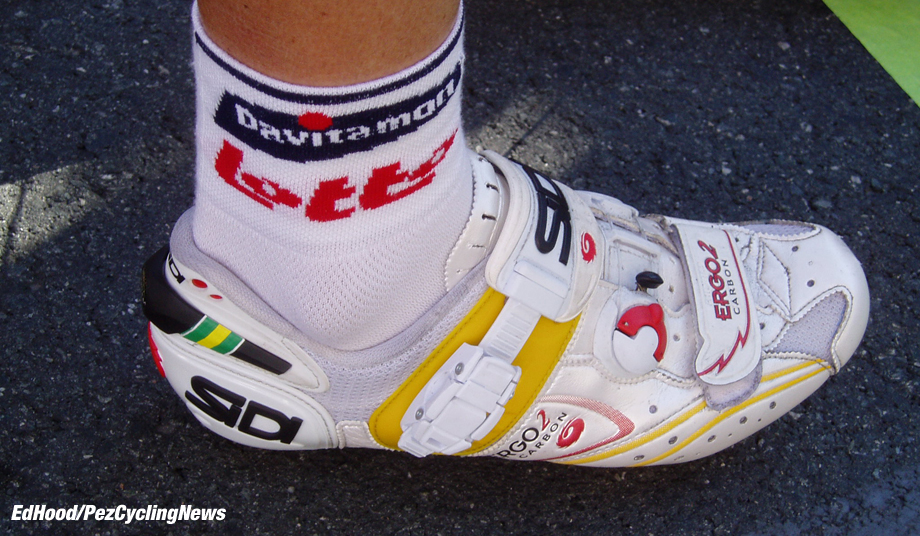 In the style stakes that year, ‘best shoe and sock combo’ had to go to Australian flyer, Robbie McEwen. Branded ‘prickly’ I always found him to be chatty and polite – silver in Zolder in 2002 was as close as Robbie got to the rainbow; he was fifth on this sunny day in Salzburg. 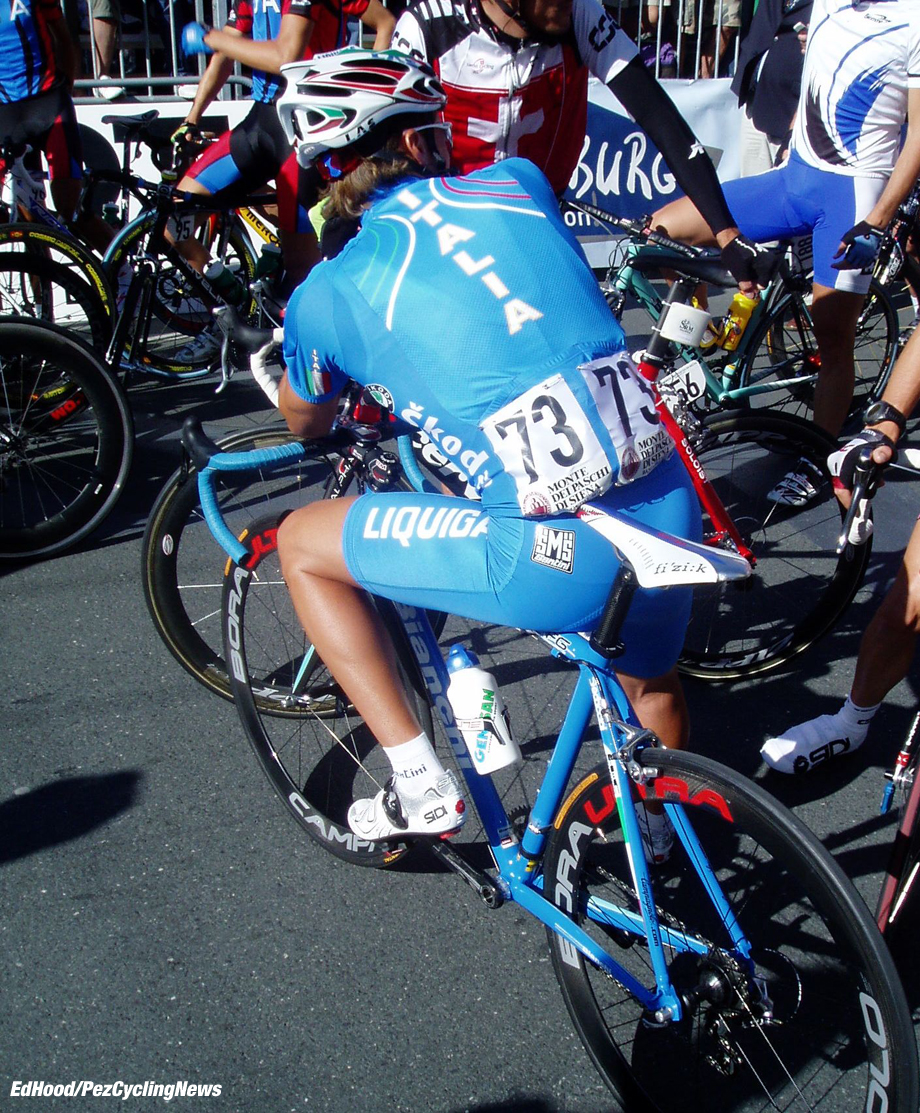 ‘Killer’ Di Luca broke my heart not once but twice. He never rode to ‘make up the numbers’ – always aggressive, popular with the fans and his team mates, a great pro. But given a second chance he blew it, going down hard after getting caught for his second and terminal bust not long into his comeback from his first ban. ‘Dodgy Doper’ or not, the man looked the part, so cool, check out his Bianchi’s paint job matching his national strip perfectly – such a pity. . . 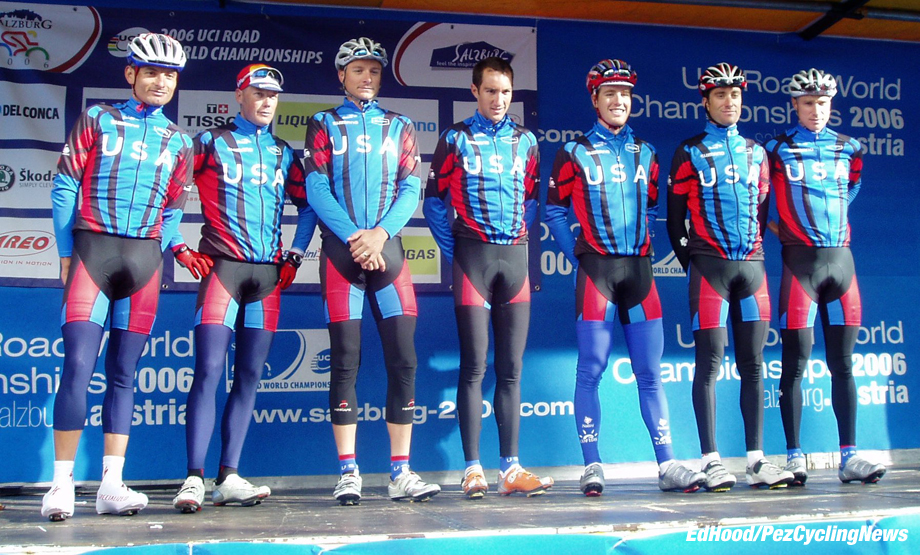 What odds would you have got at the bookies on one of these guys winning a Grand Tour? If we’d had a crystal ball, Chris Horner would have made millionaires of us with his 2013 Vuelta triumph. On the day Freddie Rodriguez was best US finisher in 15th spot. The winner on the day was Paolo Bettini from Erik Zabel and Alejandro Valverde, the man behind ‘The Cricket’s’ win was former Het Volk and Paris-Roubiax winner, the late Franco Ballerini, the team Capo. The big man from Florence scored a hat trick of wins in the Worlds as manager, two from Bettini and one from Ballan. Sadly, Ballerini died in a car rally crash in 2010 – he’s sadly missed. 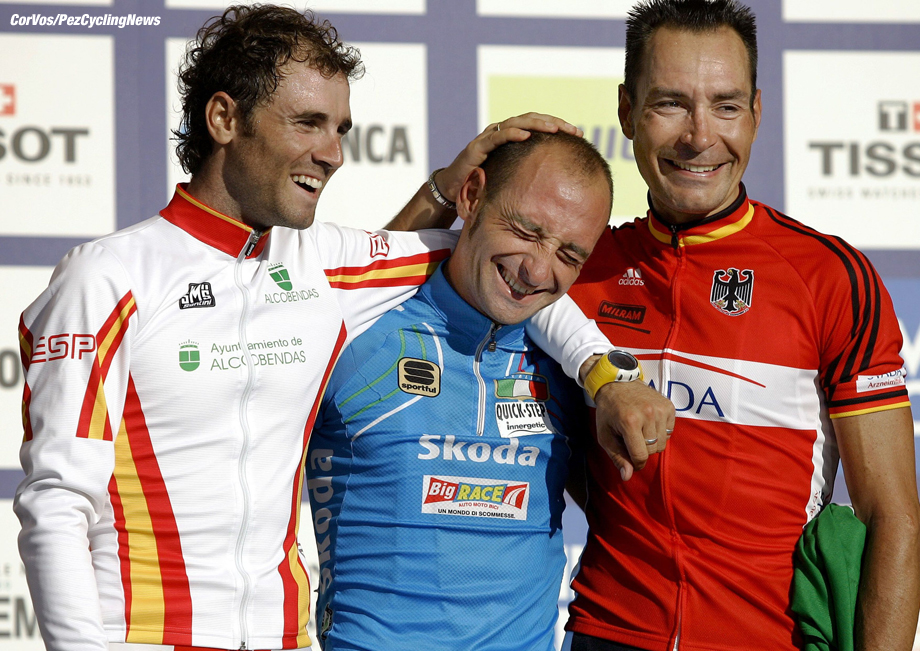