In 1994, an event took place that stunned the peloton, press and fans alike. If you were in Compiegne, France for the start of Paris Roubaix, you’ll know what we’re talking about – especially if you could get through the crowd of onlookers moshing around the GB-MG team truck.

That was the one and only appearance (that we know of) of a race-ready dual-suspension road bike – built by Bianchi and ridden (some say into the ground) by The Lion of Flanders himself – John Museeuw. 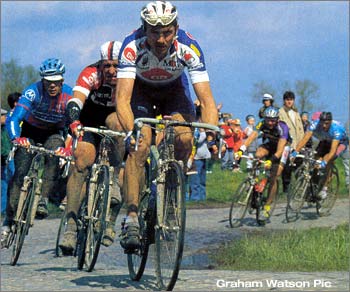 Robert MacNeil, (proprietor of Campyman.com) was the Product Manager for Bianchi Canada at the time, and was involved in the design and production of the bike that was an amazing departure from the staid thinking of the Euro-bunch, even by today’s standards. Robert is always thrilled to talk about those beautiful Celeste machines made famous by riders such as Fausto Coppi, Felice Gimondi, Gianni Bugno, Marco Pantani, Johan Museuuw, Mario Cipollini, Laurent Fignon to name only a few. So, it was not tough to convince Robert to share the story behind this very cool bike with the PCN fans…

The Bianchi Paris Roubaix full suspension bike was made for GB MG/Bianchi team leader Johan Museeuw for his attempt at Paris Roubaix. Made in the world famous Reparto Corse division of Bianchi, (that’s “Race Department” for all you mangia-cakes) this bike was and still is the ultimate ride ever created to tackle the cobblestones of the Arenberg forest in the Hell of the North race. 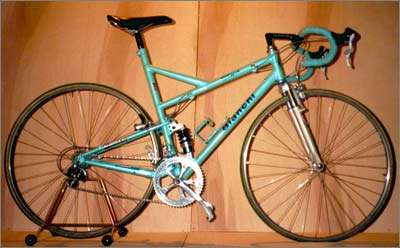 The bike is now part of the Bianchi museum.

THIS THINGS A LITTLE SPRINGY FOR A ROAD BIKE
Perhaps the first question we need answered is how did the powers-that-be even consider a dual- suspension road bike? Rob says: “First off, Greg LeMond has to be thanked for starting the trend of using suspension at Roubaix”. Bianchi Italy started to let Bianchi USA and Bianchi Canada start designing product for other countries. When the Director of Bianchi Italy would come by our offices he would see our bikes for our markets and he realized that we were more in the know then they were. Rob was a visionary of sorts: “I was the first Product Manager from an Italian Company to spec a Ti road and MTB bike, yes the frames were Litespeeds, but they were built to our specs and they were painted in our colors. Couldn’t keep them in stock.” 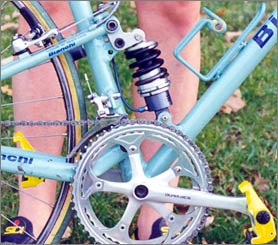 SPECS: ROAD MEETS MTB
Made of Columbus Altec Tubing, tig welded to
strengthen the frame, the bike weighed about 27- 28 lbs because of the forks, and real suspension. The travel was 2- 3 inches rear, 1 1/2 in the front. The bike was decked out in stock Shimano Dura Ace components along with a few Shimano XTR mountain bike parts. XTR cantilevers are needs for the rear, as well as a 1 inch XTR headset and seatpost. Vittoria Corsa CX Greens are glued twice to heavy duty FIR Pulsar rims. Team issue ITM bar and stem round out a bike built for the thousand year old roads. Now add a pair of American made Rock Shox forks and you might as well take your lazy boy out for a ride, because you won’t feel a thing. 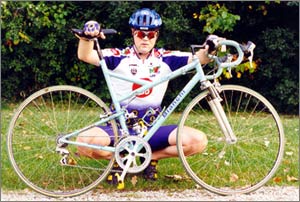 TAKE ‘ER FOR A SPIN
“While riding the bike I did not feel a single thing and only a slight bump when I would hit a big pothole”
replies Rob. “The aluminum tubing kept the bike light as possible to make up for the heavy oil/air/spring
suspension unit. Very rigid, very comfortable but a real pig when it came to climbing, thankfully it was only to used at Roubaix and not the Tour of Flanders”.

The frame has some very interesting designs due to the nature of the event is was built for. A slack headtube
angle was needed to accommodate the straight suspension fork, as well as a additional sloping top
tube for strength. This design was taken from the Bianchi Cobra Mountain bike. The chainstay was curved upwards to meet a seat tube mounted pivot. The rear triangle could be disassembled in minutes for easy maintenance. The suspension could be adjusted on the fly by reaching down to dial the shock closed for the final sprint. “Anyone who watched the race in person or on video saw Johan make the final break until he blew his tire. The bike did its job, even though after the race a small crack was found it did not affect the ride.”

Of course, anyone watching that same video will remember Johan’s tire blowing , and him dropping the bike in disgust, but it was not the bike he was upset with – his pedals were overtightened and he could not unclip, while the break rode away. In fact, Rob tells us: “Johan loved the bike but most of the euro dudes were pretty naive to new technology. He finished the race in 13th at 4:24.” Johan has since gone on the win Paris Roubaix 3 times and Bianchi has since gone on to win the Tour de France again.

WHAT EVER HAPPENED TO…
Rob recalls: “The bike was only raced once because the bike cost way too much, if I remember it cost a tad over $ 20,000 to produce. Sadly, it was never raced again because GB MG disbanded and Bianchi was no longer sponsoring the team.”