By Callum MacGregor On Aug 1, 2016
Share
Like PEZ? Why not subscribe to our weekly newsletter to receive updates and reminders on what's cool in road cycling?

RideLondon’16 Roadside: Callum MacGregor had only just returned home from driving Ed Hood round the 2016 Tour de France and found himself in central London on Sunday for the Prudential RideLondon Surrey Classic. The English capital opened its doors to Tour winner Chris Froome and a star studded start sheet and Callum was there to take in the atmosphere.

The legend that is Tom Boonen (Etixx – Quick-Step) spoiled the Sky party when after Geraint Thomas was reigned in from his solo effort the scene was set for a bunch sprint that without any real lead-out teams saw Tornado Tom relive his glory days winning the Prudential Ride London Surrey Classic 2016 on the Mall. 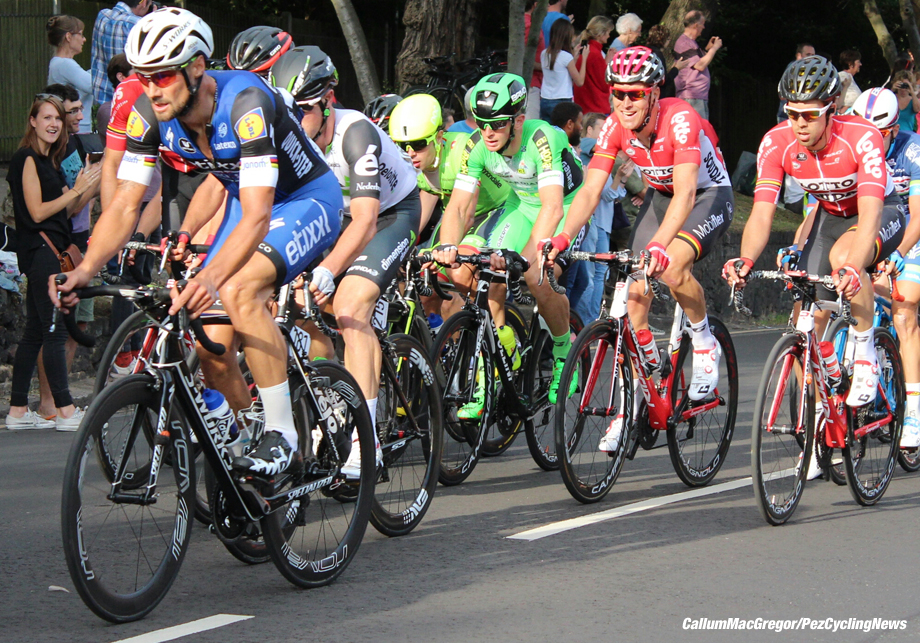 It was a tough finish to a hard day out.

For me it started 48 hours earlier. Having recovered from excitement of the final week of the Tour De France I jumped on the train for London on Saturday morning with a plan hatched on Friday night; take camera, figure out the route and hopefully get some pics and a story of the Prudential Ride London Surrey Classic, which has to be the worst name for a race ever. Seemed simple enough.

The journey gave me the chance to check the riders and route. With Chris Froome and his faithful lieutenants Geraint Thomas and Ian Standard, hopefully recovering or recovered from their French odyssey, the crowds should be out in force to see Britain’s greatest ever Grand Tour rider. 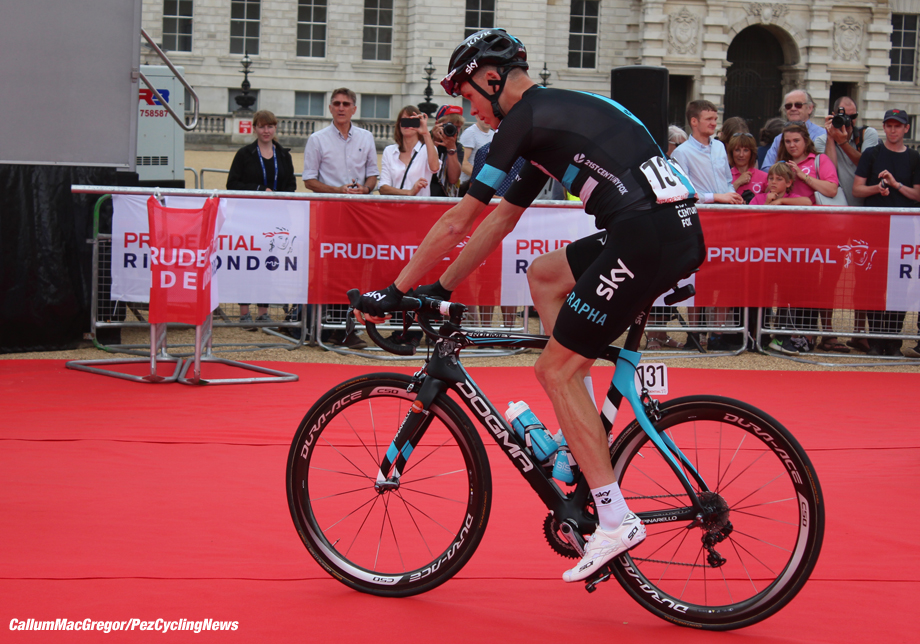 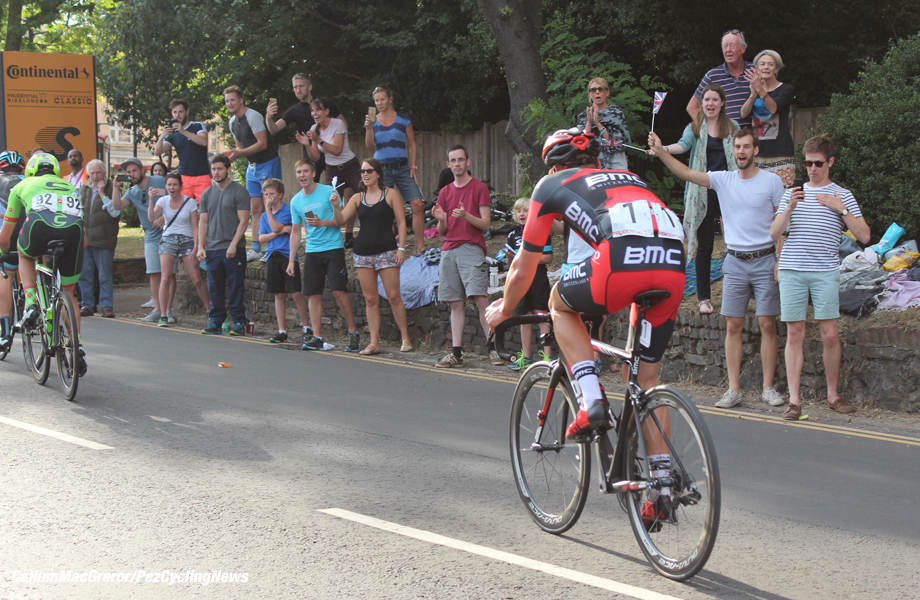 Alex Dowsett will also be riding for Team GB and if they ride as a unit with a plan they will surely be there at the finalé. 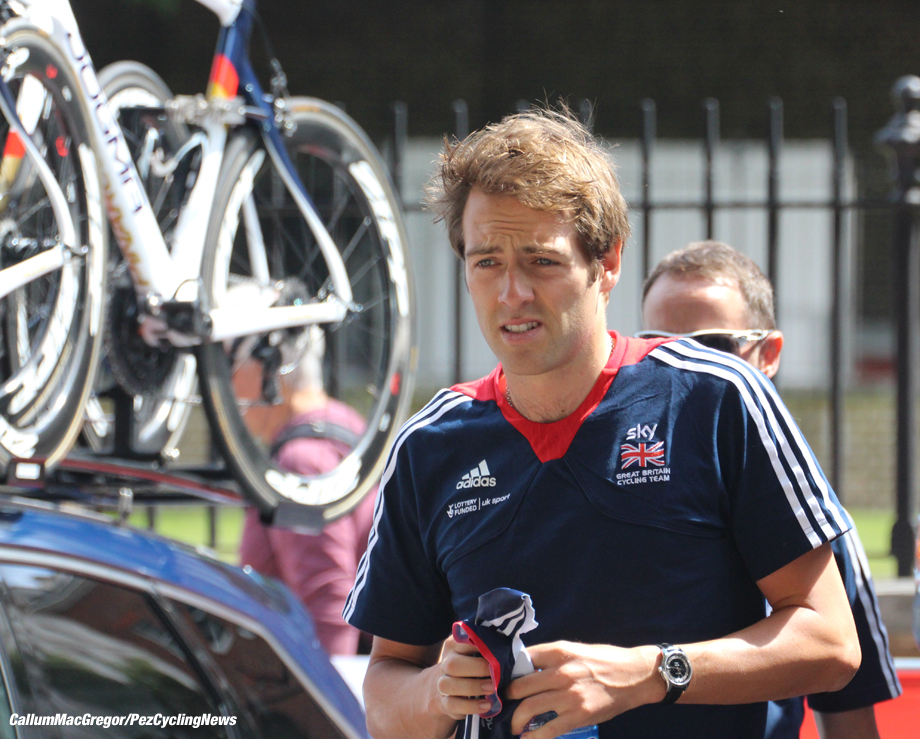 Dan McLay is another TDF survivor, riding for GB, who will be similarly hoping he’s recovered and looking for a big result.

This may prove to be the battle of the Kings of Bling, with Michael Matthews Orica-BikeExchange and British champ Adam Blythe both known for their gallop and appreciation of the flasher finer things in life. 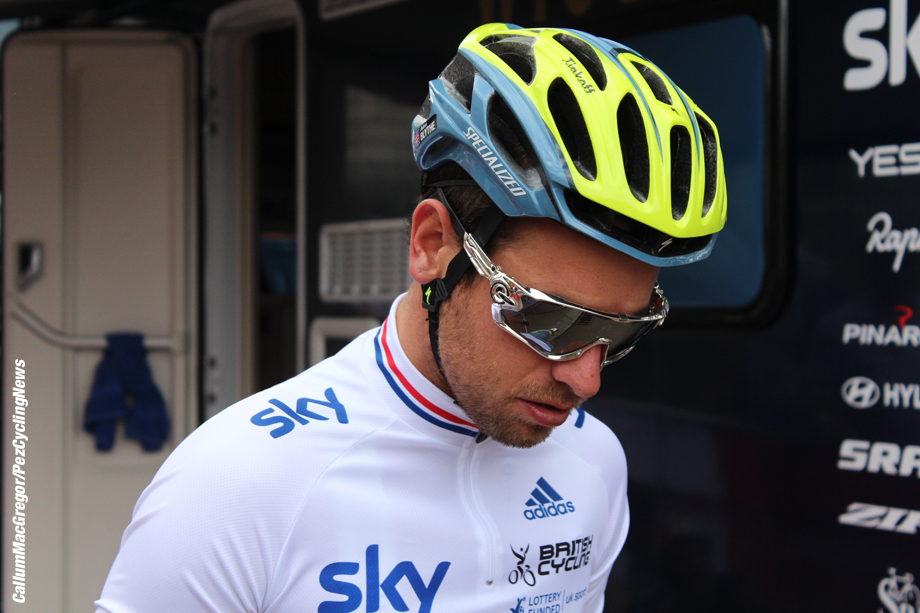 There’s not a lot of WorldTour teams in evidence but those that are have strong line ups and will doubtless take the race on. Domestic teams will be keen to show well and many will have this as a key target for their season. Matt Holmes of Madison Genisis will also be one to watch and as it turned out had a hard day in the break.

It was going to be a good race with enough climbing to deaden many a leg but probably not kill off the sprinters. So I head for Horse Guards Parade and wander past Big Ben with riders streaming past, not the pro’s the sportive riders, tackling 100 miles with the first riders setting off at five thirty this morning. 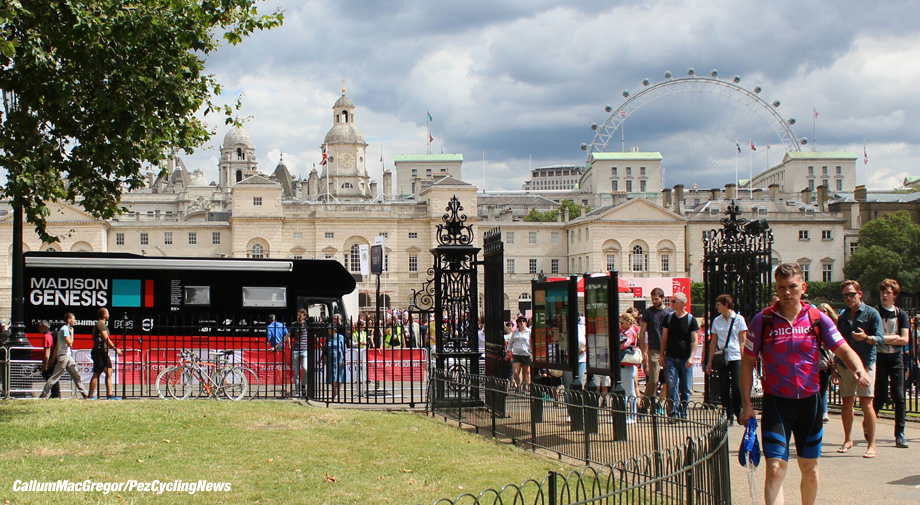 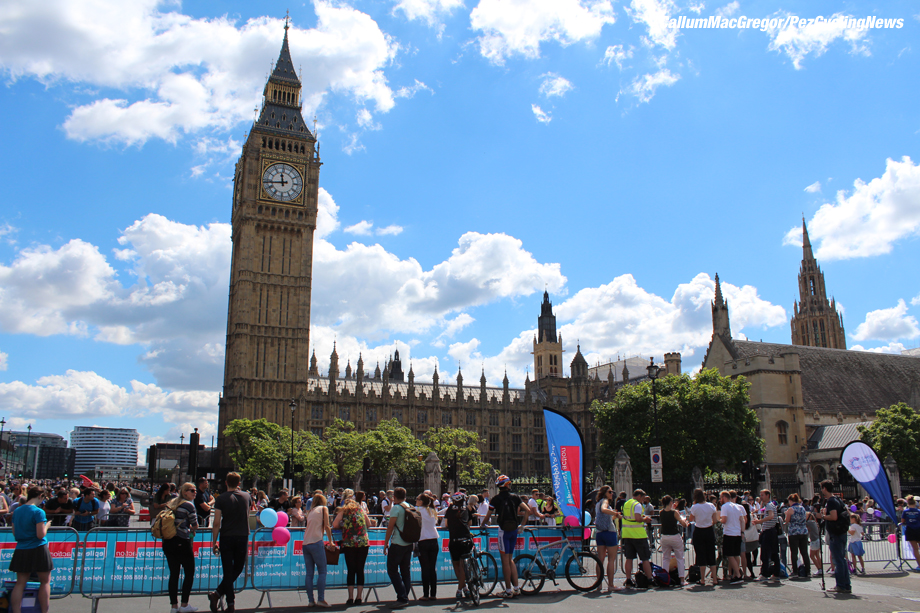 I was running on Wimbledon Common at about ten this morning and the fastest riders were already through. The numbers are impressive; forty-thousand cyclists, lycra clad, all shapes and sizes, with an impressive amount of carbon on the road. 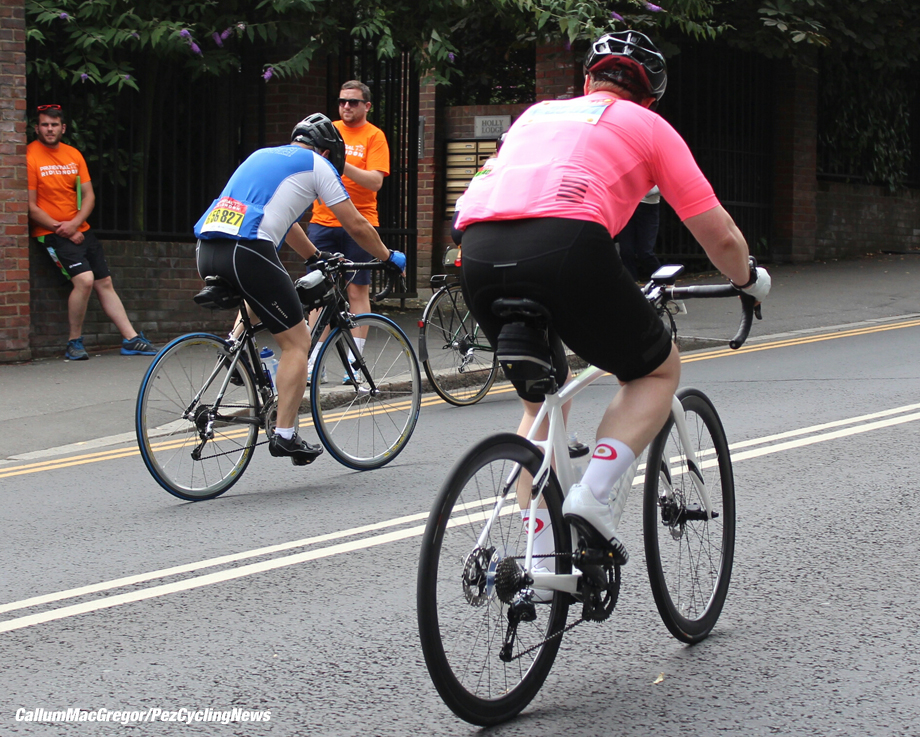 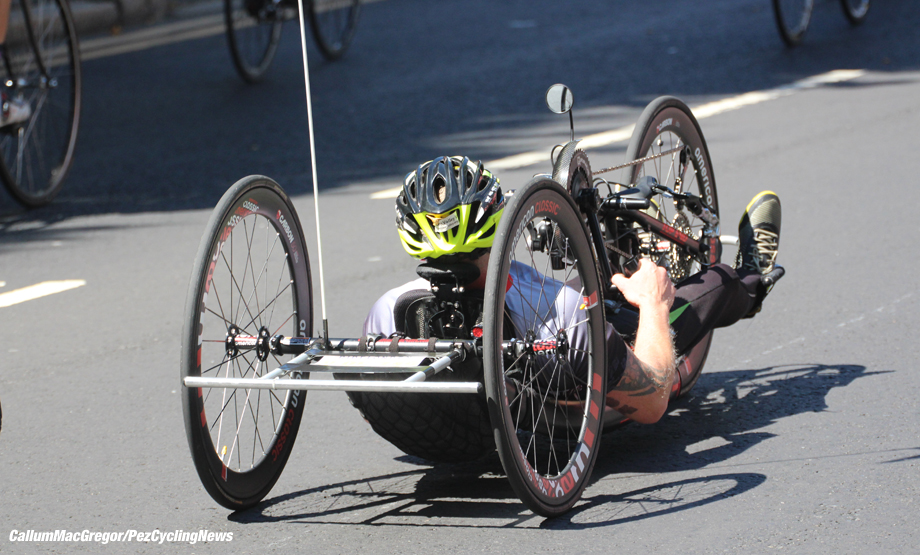 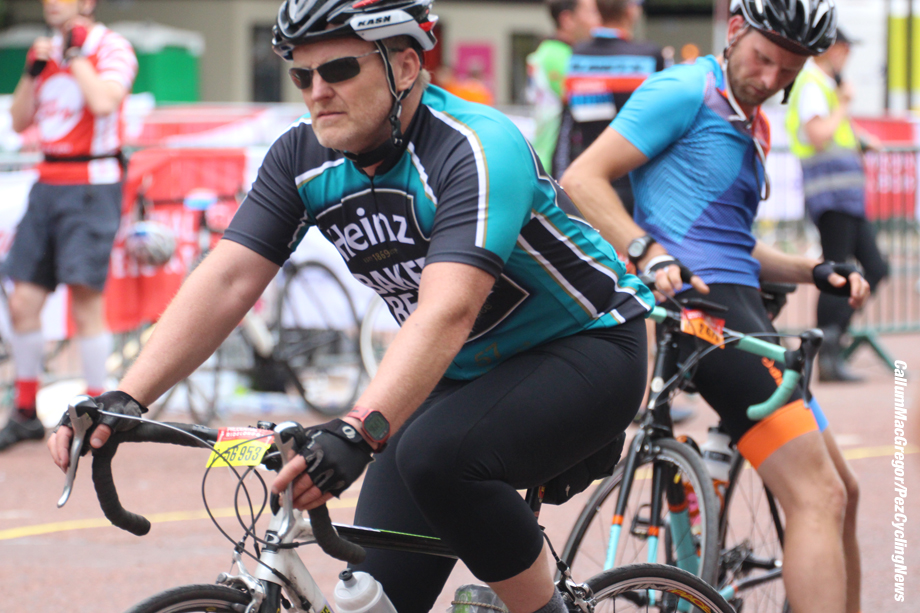 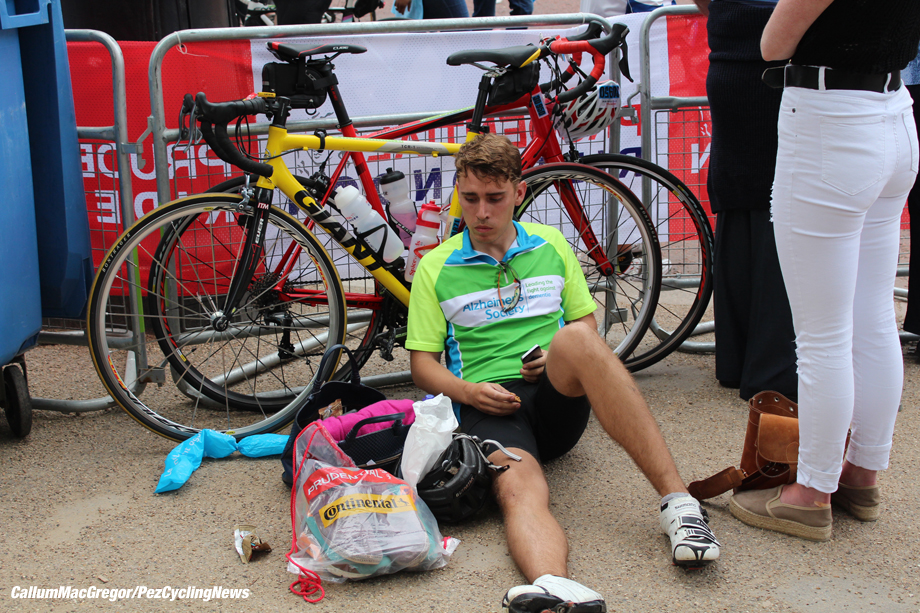 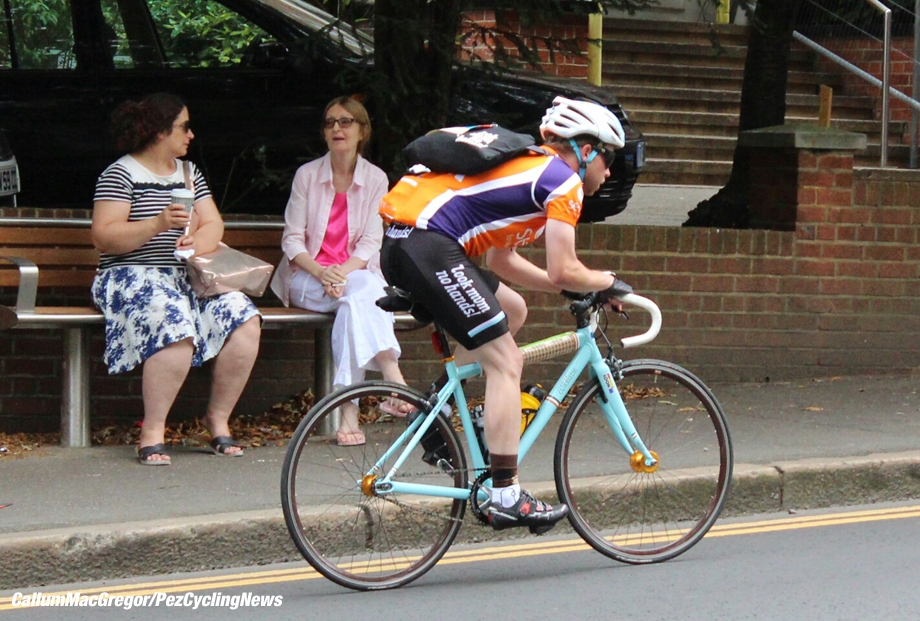 I wonder if Sky have lost a man, but on closer inspection, maybe not. 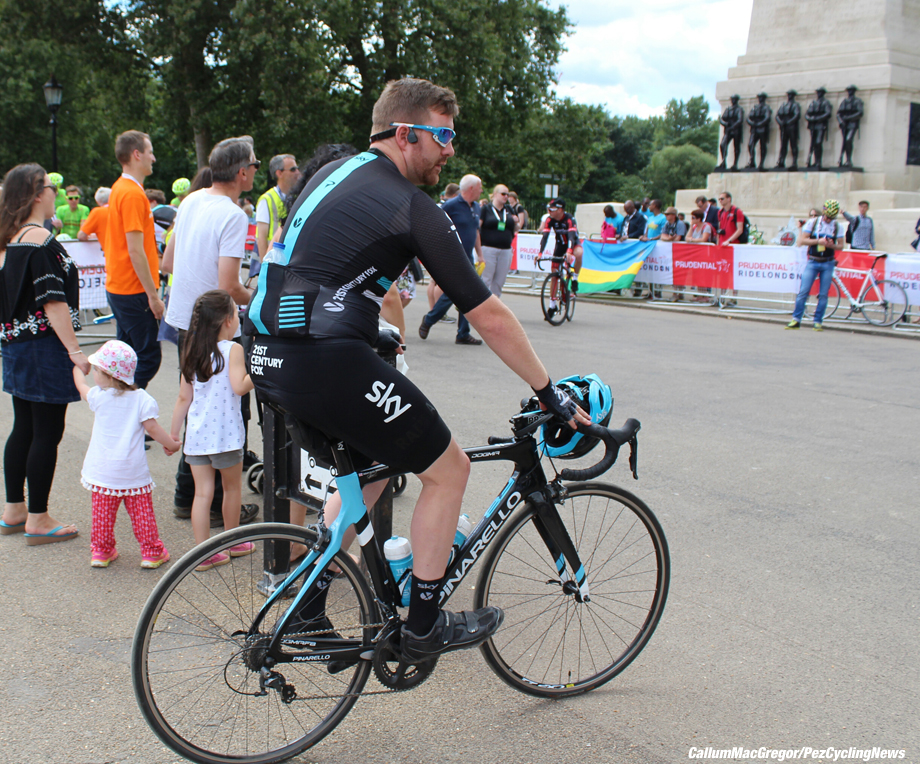 It’s a big deal for charity fundraising and there are supporters all along the route. 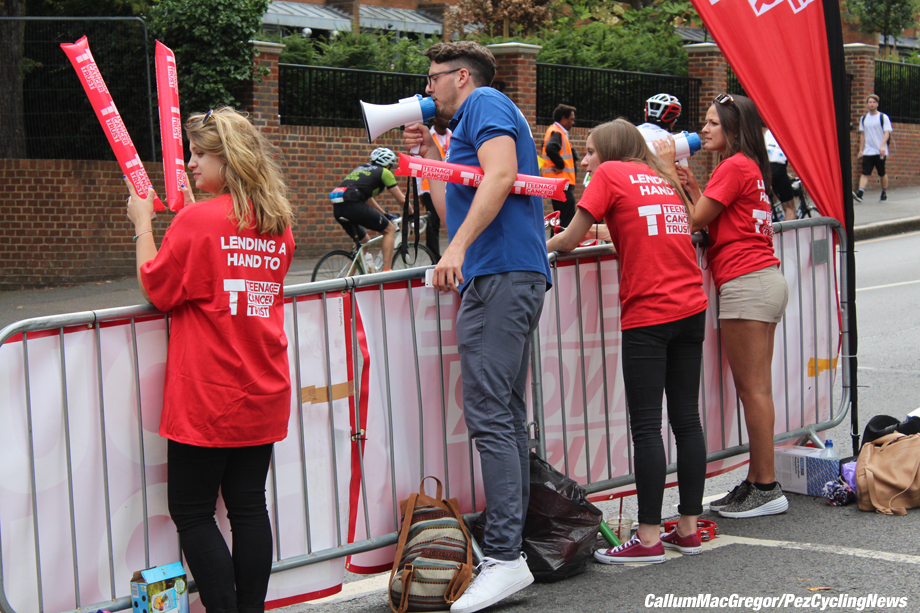 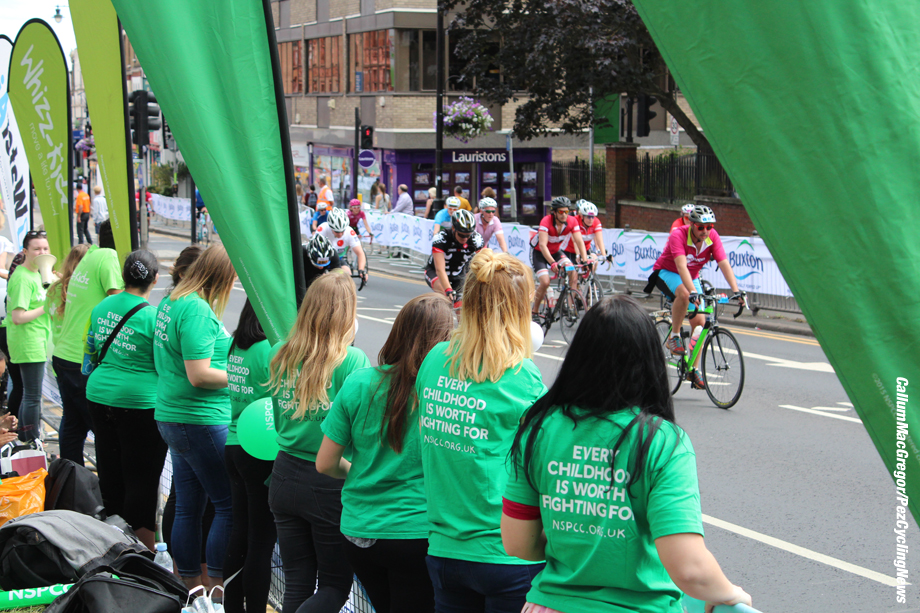 The riders have started to head for the sign on and the Sky bus arrives with the traditional blue replaced by yellow. 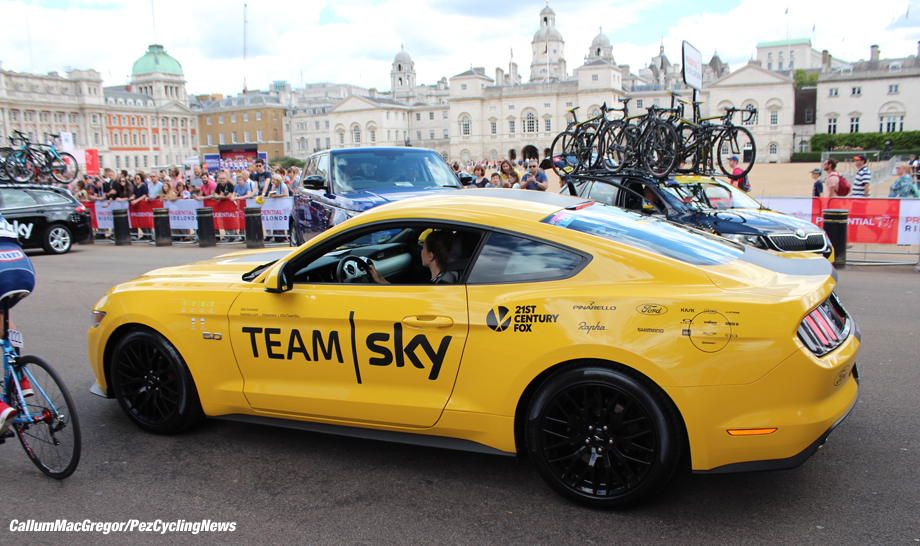 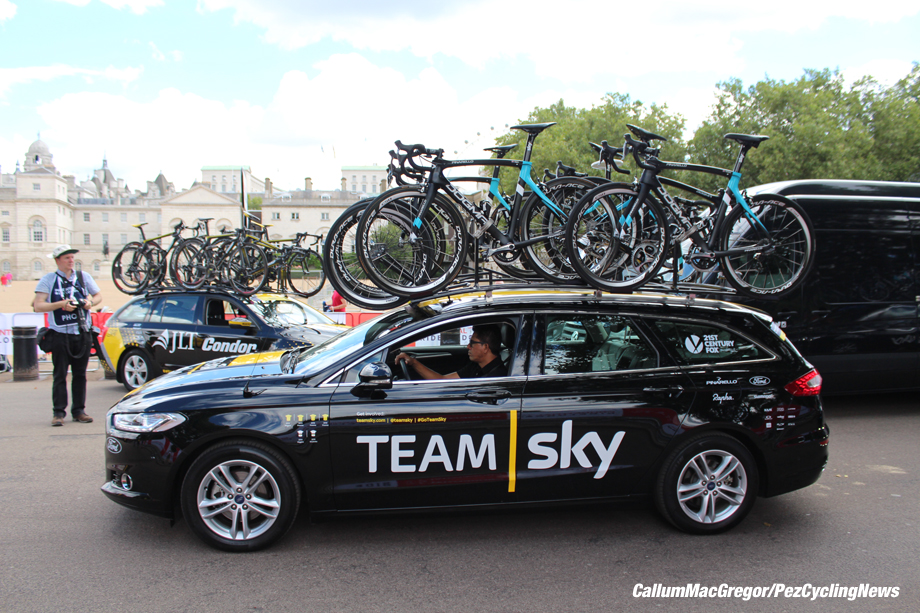 The Sky Ford Mustang appears wrapped in yellow also, with Sally appearing from behind the wheel, sporting the four Tours tee shirt 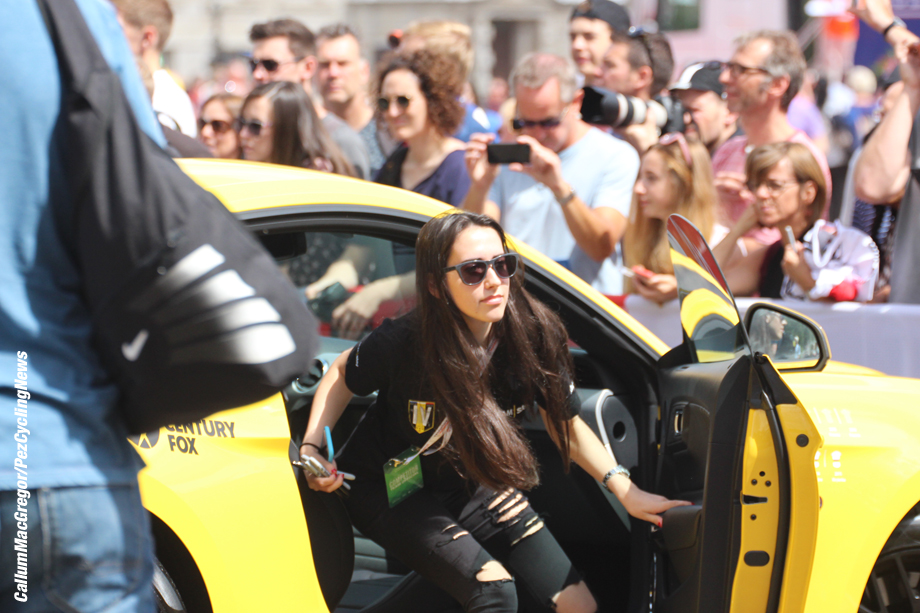 Whilst Sky have gone to town on the yellow, Froome appears in standard Sky kit and takes time signing autographs and selfies with fans, relaxed and smiling. 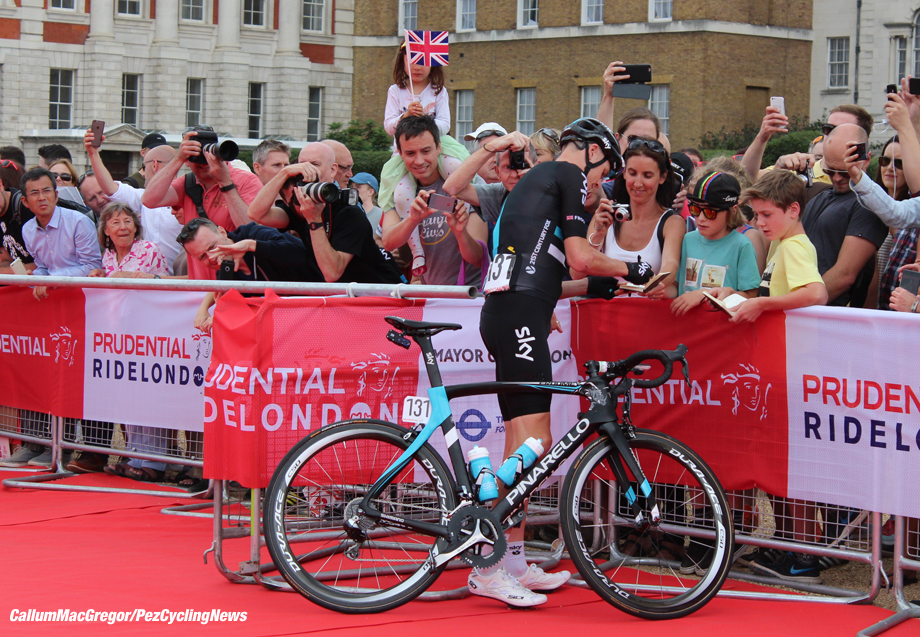 It’s a real welcome home. There is a beauty about some bike races and this appears to be no exception, One Pro Cycling are adding their beauty to the day and it’s dazzling. 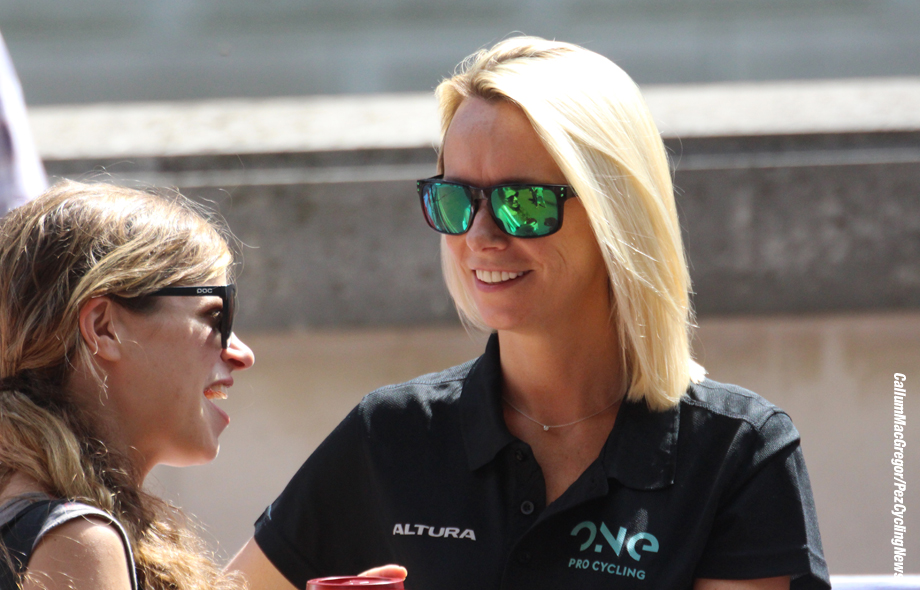 The red carpet is out for the riders and I spot Lord Mayor of London Sadiq Khan pressing the flesh and getting his photo taken with the voters. 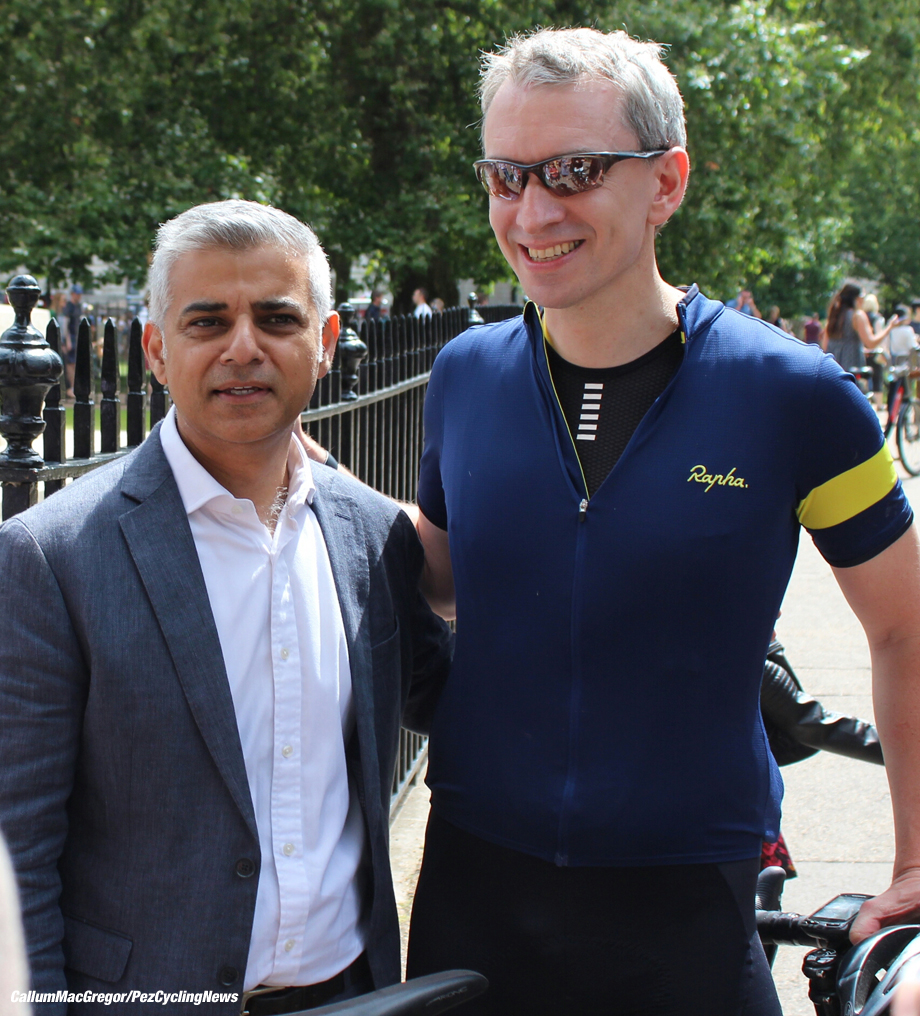 I watch the roll-out and spot Dan McLay, relaxed bringing up the rear. Not like last week in France.

Having found my way back to Wimbledon I watch the never ending stream of sportive riders before eventually giving up and returning to my abode for the weekend. The television shows Sky letting Geraint and Ian Stannard off the front and when they eventually make contact with the break it looks like it will be a Sky day.

I venture out to await their arrival taking up position just before the final sprint prime at the top of the climb through Wimbledon. 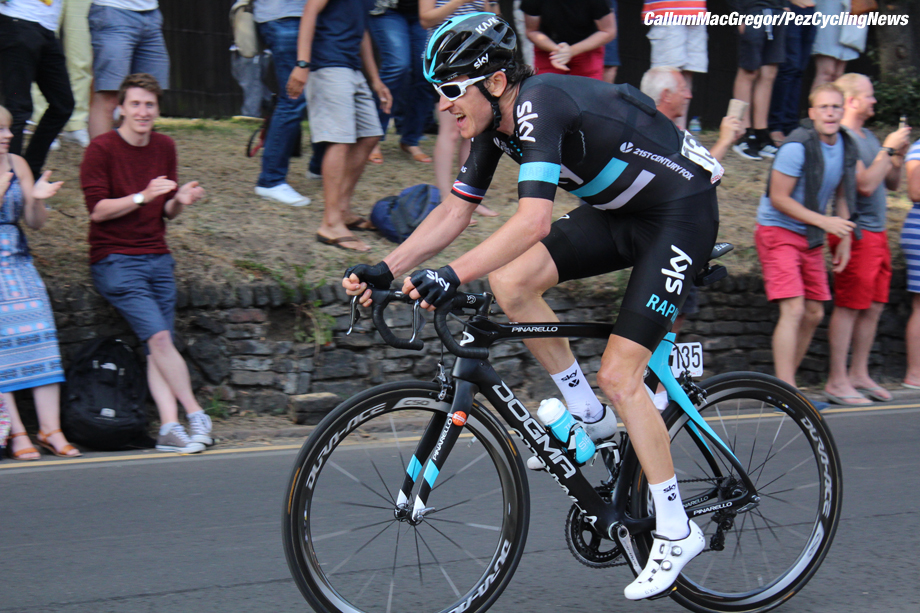 First up is Geraint Thomas, flying with teammate Ian Stannard ripping it up and hurting the remainder of the break. It doesn’t look like it will be a repeat performance for Jempy Drucker BMC today.

The Etixx – Quick-Step team lead the remainder of the bunch driving hard, team leader Tom Boonen looking lean and focused. As it turned out the driving paid off and Belgium’s favorite son delivers the goods. Mark Renshaw Dimension Data held off fellow Australian Michael Matthews for second with Bling rounding out the podium in third.

It’s been a great day and whilst the British fans may have wanted a different result the Begins will be celebrating tonight.