By Jason Saltzman On Jul 20, 2020
Share
Like PEZ? Why not subscribe to our weekly newsletter to receive updates and reminders on what's cool in road cycling?

Rider Blog: Season 2020 part 2 is about to kick in, but our man in Austria, Jason Saltzman, has made an early start with the Slovenian National time trial championships and the Palten-Ennstal Tour. Racing at last! 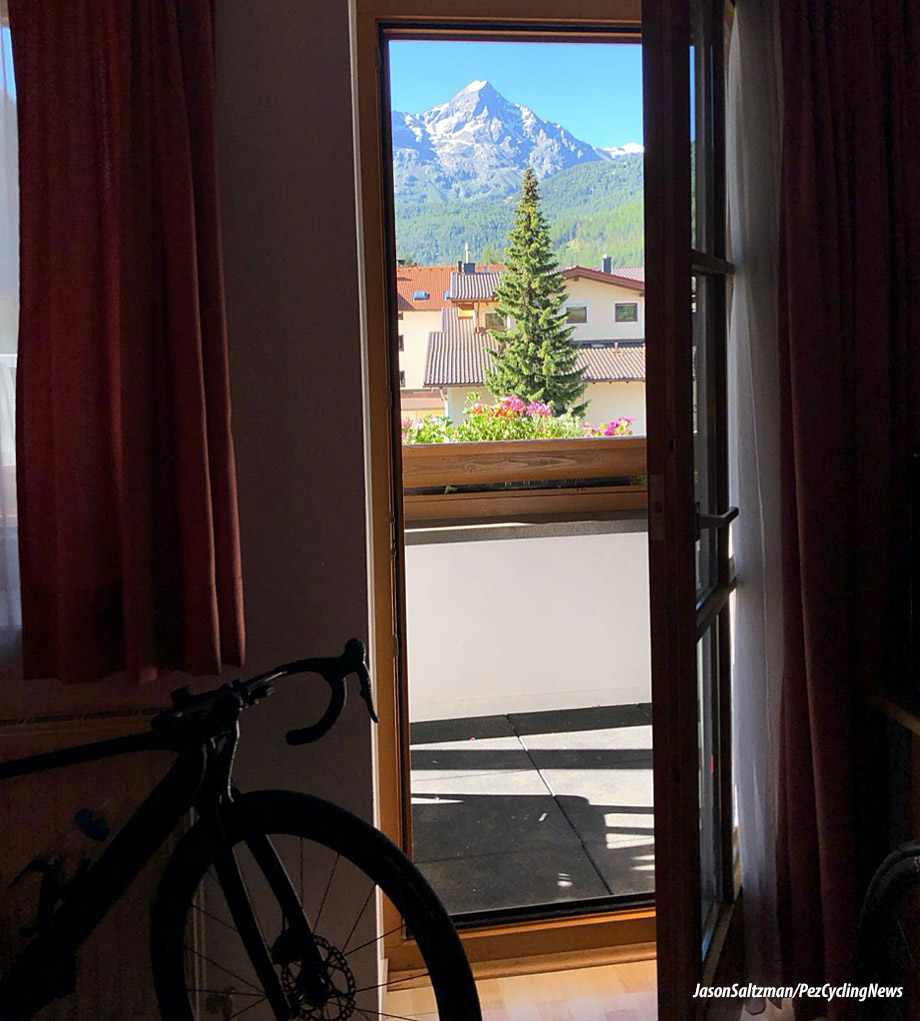 The view from the hotel bed in Sölden. That peak is where we were headed later in the day

Bike racing is back! Well, sort of. Over the course of the last two weeks I’ve pinned a number on 7 times to ride the first races back after quarantine. All of the races have been TTs. The first race was Slovenian National Championships. (No, I did not suddenly obtain Slovenian citizenship. They let a few foreigners ride but did not count us in the official results.) This was followed by a 4 stage (ended up being 3 stages due to road closure problems for the final hill climb), two-day stage race in the heart of Austria at the Palten-Ennstal Tour. One rest day later, I started three consecutive days of hill climbs up the infamous Großglockner (https://www.strava.com/segments/658113?filter=overall), Kitzbüheler Horn (https://www.strava.com/segments/619225?filter=overall), and Rettenbachferner (https://www.strava.com/segments/1536920) climbs. 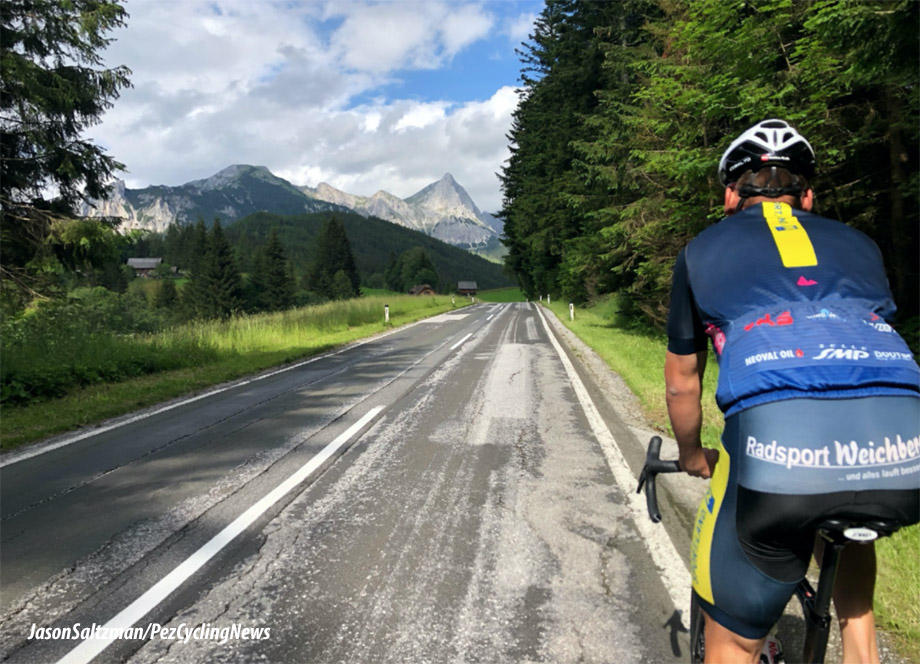 Riding around Kaiserau before the prologue of the Palten-Ennstal Tour

Let me first say, that TTs are by no means my favorite form of racing. I have a huge appreciation for the truth telling properties of a time trial. To be cliché it is you and a bike against the road ahead and the clock. However, especially after nearly 5 months of only measuring myself against a clock, a power meter, or a Strava leaderboard, TTs really don’t seem to be more than glorified FTP intervals. The extra motivation of a number on my back and the atmosphere of a race are more than welcome, but, especially for the hill climbs, the results are almost purely determined by w/kg as opposed to the chess match that is mass start racing. 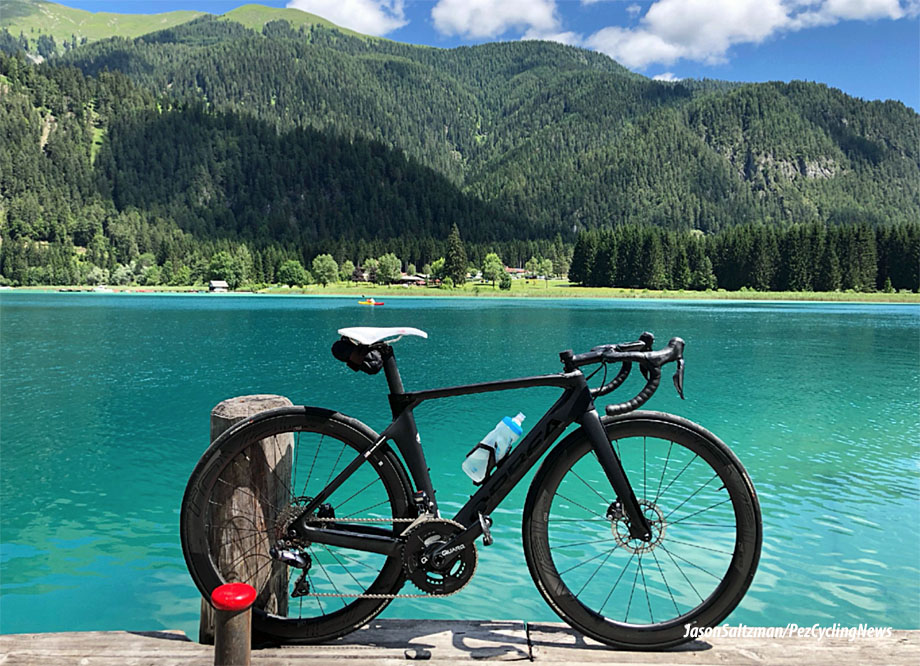 My own efforts at these 7 races, were a bit of a mixed bag but trended upwards. The first race in Slovenia turned out to be a throw away but a good lesson learned with a really bad reaction to a caffeine gel (something I’ve now nailed down to the difference between synthetic and natural caffeine sources). While the race was a bit of a disappointment, as my first trip since lockdown started in March, it was awesome to be back with teammates and to enjoy the race-tourism through a beautiful part of the world. The tri-country corner between Italy, Slovenia, and Austria in the Triglavski Narodni national park is truly spectacular and worth visiting if you get the opportunity.

The next three races at the Palten-Ennstal Tour were a 1.5km prologue, an 8.7km hill climb, and a 6.3km time trial. The prologue and flat TT were tricky efforts trying to balance power and aerodynamics as they were Merckx-style and for a 52kg rider I limited my losses quite well. My hill climb effort was well paced, but I still found myself a bit further down the results sheet than I would have liked. Again, the parts of Austria that the race was in were absolutely stunning and the banter over pre-race rice and post-race pasta was welcome after eating alone in my apartment for the past four months. 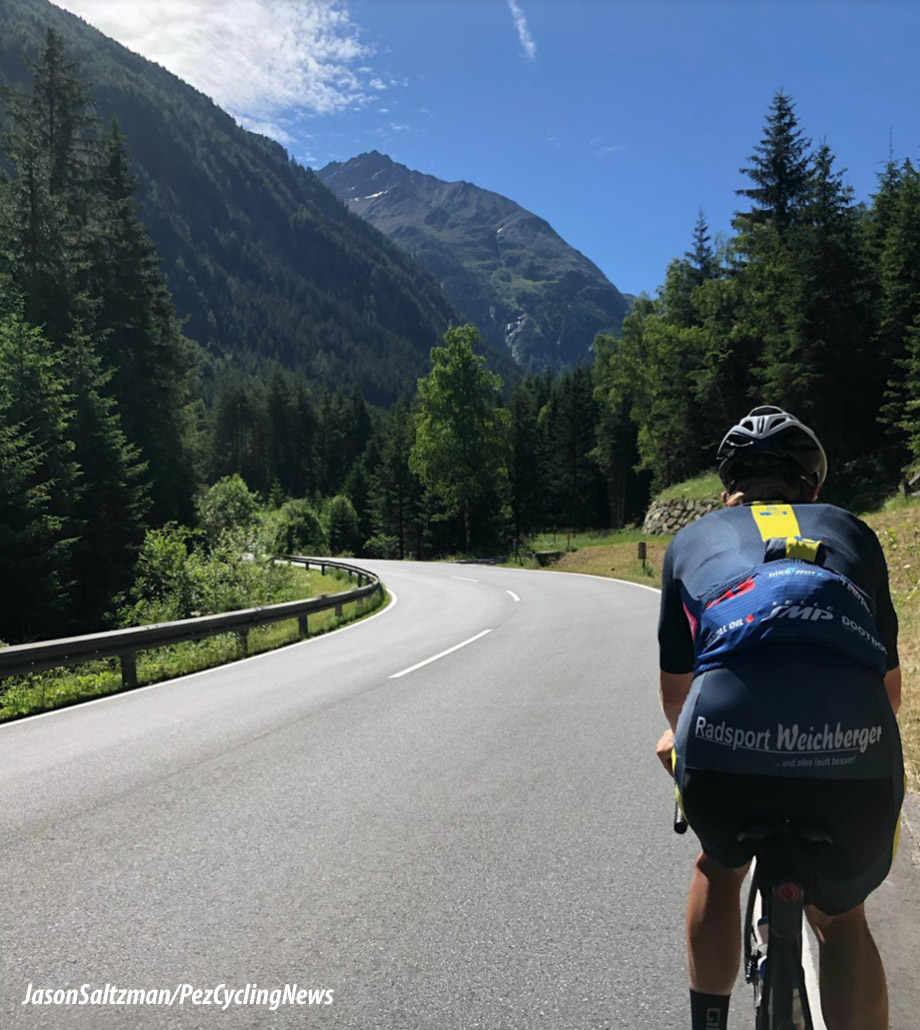 The morning ride from day 3 of the Österreich Dreht Am Rad TT series. The valley runs from Innsbruck down to the Italian border

After one day back at “home” in Pinkafeld, I packed up again and continued what I have dubbed my own “Tour of Austria”. The next three days were part of a 10-day long TV series promoting cycling in Austria and featured three of the hardest climbs anywhere in the world. I say this having raced up the Mortirolo last year. As this was a made for TV event there was a strange mix of participants including Austrian celebrities and world tour pros, including former winners of the Tour of Austria. The first night even had a dinner that is best typified as a race hotel meal meets cocktail party. With evening starts each day, I was able to explore the area around each climb (the photos do more justice to the magnificence of this country than my words could) on daily morning spins before turning my attention to the task at hand. Again, I was fairly happy with my efforts, but still needed those extra handful of watts for the sustained efforts to be really competitive with the best climbers on the longest climbs. Time trials, especially hill climbs, leave little room for excuses and have a certain ability to cut through the fluff. Really, what these hill climbs confirmed for me is that while my real strengths lie in short, repeated, VO2 max style efforts, on a good day I can likely follow the wheels on the longer climbs. They also left me hungry for the more technical, more egalitarian style of mass start racing. 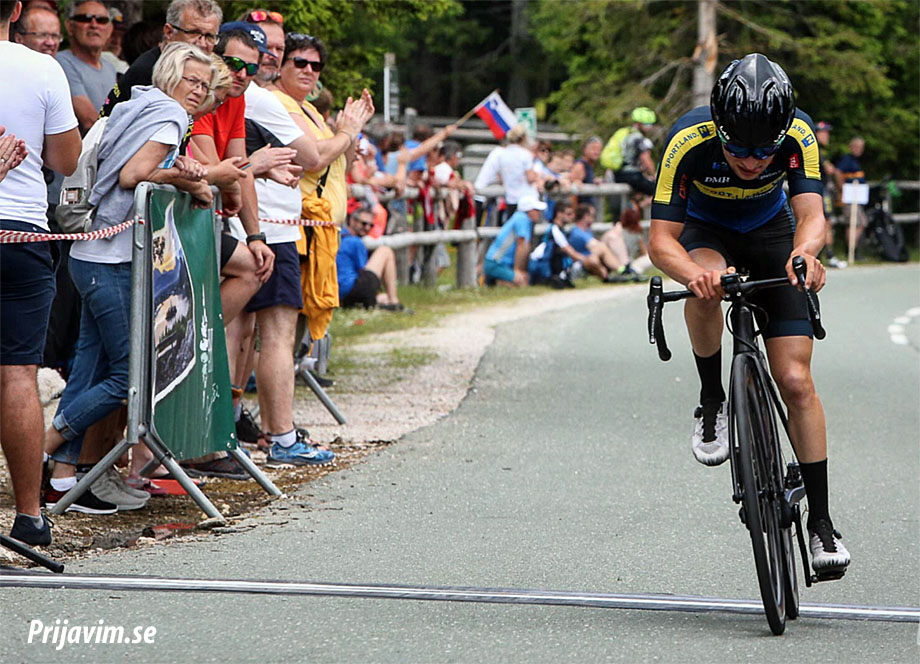 Crossing the line at the end of Slovenian TT nationals

All in all, the experience of bike races and events as Europe comes out of lockdown was a true mix. The race camaraderie felt all so familiar. Riders, team staff, and promoters shared jokes and meals, but all with an underlying understanding that we were balancing our livelihoods and our passions with the greater concerns for safety. 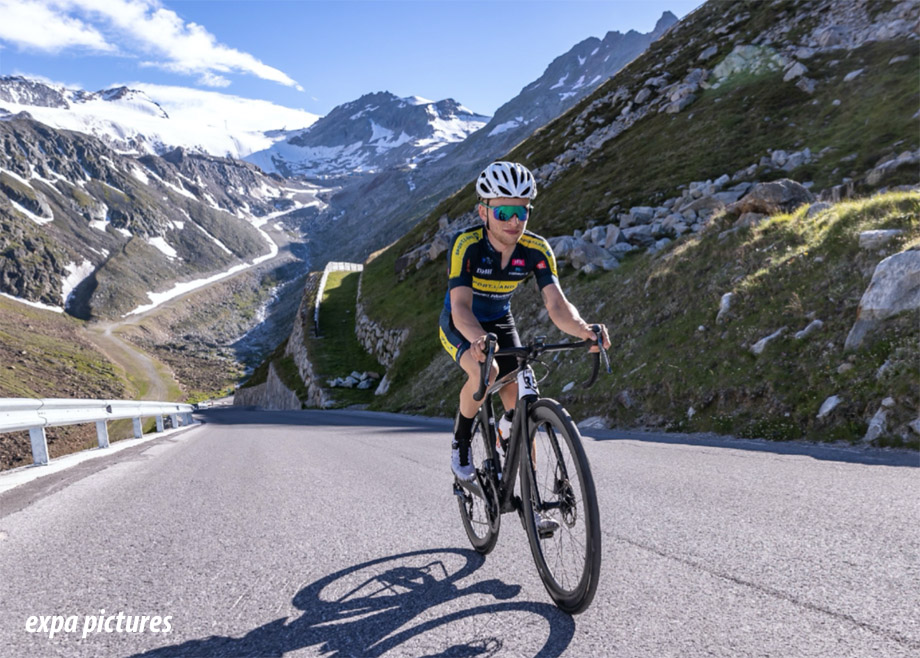 Nearly 2700m up on Rettenbachferner on the last stage of ÖDAR

We have a few mass start races on the calendar starting at the end of July, but right now, many of these races are in countries that are seeing resurgences of COVID-19. Who knows what opportunities may be safely available? With what is likely to be a very, very condensed season, if it happens at all, I am taking a few days to recover after this string of TTs before driving hard to be 100% ready come the mass start racing in a few weeks’ time. Each race opportunity is going to carry a hefty weight for everyone, but especially for those of us who don’t have any certainty as to our plans for 2021.

Meanwhile, it’s back to intervals and Strava KOM hunting as the training intensity increases, hopefully leading into the fast and furious nature of the mass start events. This happened to include an attempt at a KOM that boasts free coffee at the café located at the top of the climb (Stadtcafe Wetzelberger in Friedburg) for the current leader. It may not be racing for prize money, UCI points, and the likes, but for a cyclist, free coffee is worth its weight in gold. So, for now, I’ll be enjoying my coffee and doing my intervals prepping for whatever may come. 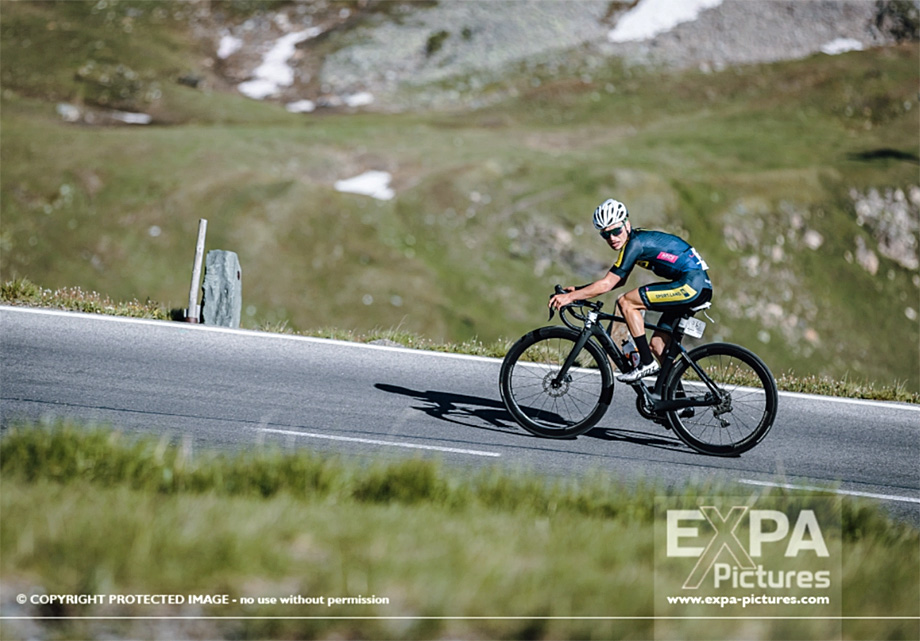 Jason Saltzman from California, will be riding for the Austrian Sport.Land Niederösterreich UCI Continental team in 2020. Jason will be giving us the low-down on his Euro season with regular diary up dates from the peloton through out the year.
Facebook: Jason Saltzman
Instagram: @j.salt
Strava: https://www.strava.com/athletes/69544