Rider Blog: Jason Saltzman dragged himself half-way round the World from California to Austria to be a professional cyclist… All was going well, until the coronavirus played its part in stopping the season, now there is just an empty road ahead. Jason brings us up to date. 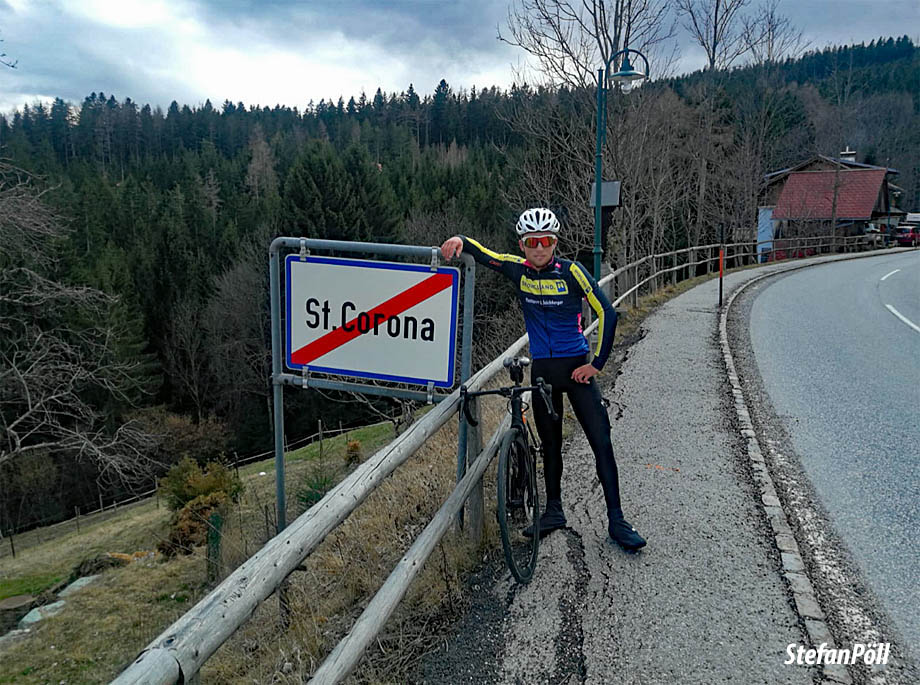 Almost exactly a month into my 2020 European campaign and I am almost certain you can guess how this will read… bike racing is cancelled.

Before I address the micro-organism in the room, let me briefly share the three weeks before we took the rose-colored lenses out of our riding glasses and acknowledged the magnitude of the crisis. My “life” experience this year is much different from last year. Instead of being in a cocoon with English teammates in a team house in Italy, I am out in the “real world” in Austria. Independence brings small, enjoyable things like shopping and cooking for myself (one of my hobbies away from racing). Living alone in a small town in a country where I do not, yet, speak the language makes it challenging to get enough human interaction (the current need for “social distancing” doesn’t help). My apartment is starting to feel a bit more like “home” and I know my way around the grocery stores. That said, success racing requires being a happy human not just a bike racing hermit. 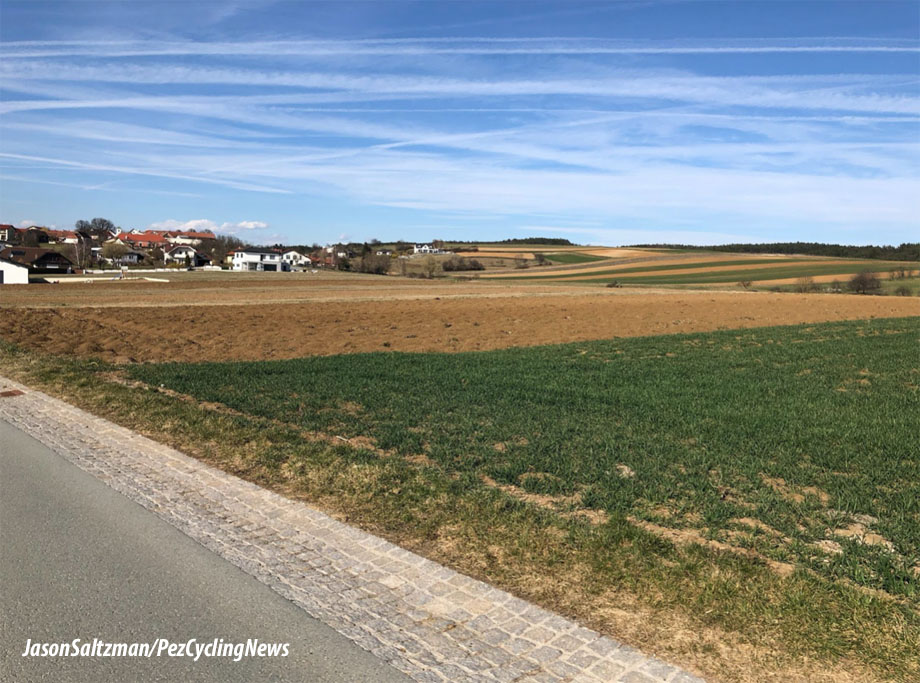 The rolling hills heading towards the Hungarian border from my apartment in Pinkafeld, Austria

Having only a handful of days in Austria, with the rest of the time being spent in Croatia at team camp (Feb 17-22) and the first two races (Mar 3-11).

Team camp varied between controlled and an all out “flex off”. As our director said, “now is not the time for making exact because racing is not exact”. This provided much needed race simulation given the relatively late start to our real racing. Off the bike, a language barrier exists, but I always feel welcomed and am embracing my baptism under fire in the wacky linguistic world that is the various Austrian dialects of German. 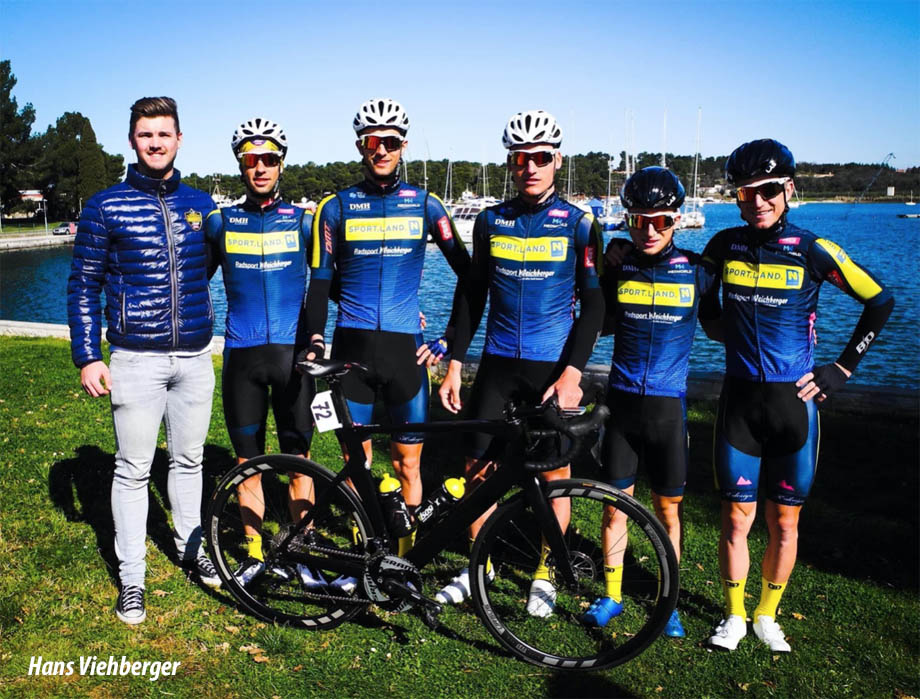 Perhaps the most “enlightening” part of team camp was the realization that most bike teams are the same. Teams often struggle early in the year to get everything perfectly organized when it comes to equipment, product, and sponsors. I make this observation with appreciation since, for most companies, sponsorship of a Conti team is something done for the love of the sport rather than a rational cost-benefit analysis. This support is beyond noble and allows riders like me to do what we love. 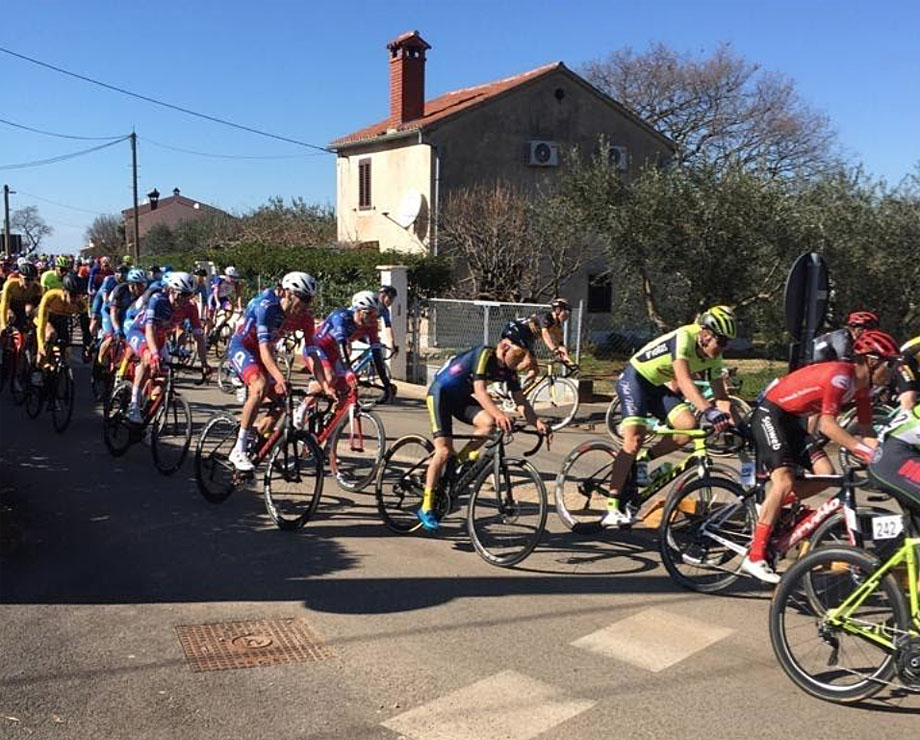 Cycling teams seem to have a standard cast of characters. Every team I’ve ridden for has had: one rider who always trains extra, one rider who half wheels/is always trying to prove his superior fitness, one rider who has a highly specific diet, one rider who is there maybe more because of sponsor ties than riding prowess, etc. At various points in my career I’ve occupied most of the above roles. So, who am I this year and going forward?

Following team camp, I returned to Austria for a week of settling into the routine of training, recovering, and perfecting my “pro lazy”. With the first races only a week away, it was easier than ever to focus on preparation. Racing was no longer this abstract idea to be ruminated on during long winter hours. We were approaching “put up or shut up” time. In most things in life you can generally spin the story, but in sports the results are honest and objective. 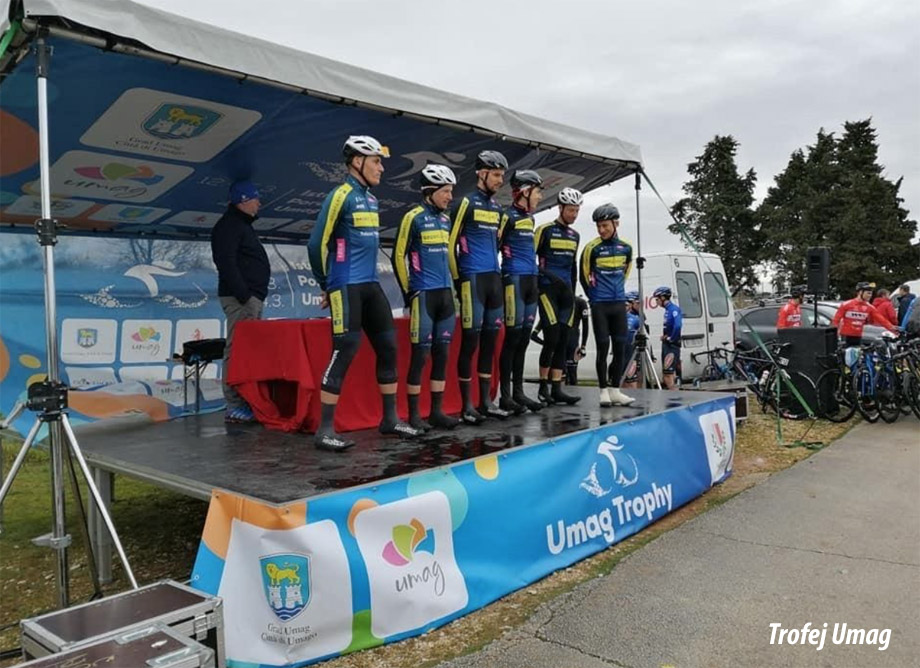 The first race at Trofej Umag wasn’t necessarily a target, with it being a 154km (7 laps) of what was basically destined to be a mass field sprint. In general, bike racing is controlled chaos, but early season racing is pure unadulterated chaos. Mid race I took the opportunity to stop for a nature break, only to have a Russian rider come barreling into me stopped on the side of the road. So, not only was I already in the caravan having stopped to relieve myself, but now I had to pick myself and my bike up off the ground, put my chain back on and remount to find myself about 50m behind the last car in the caravan. This 50m grew and shrunk for about half a lap as I engaged in my own personal race to get back to the race. Eventually, I made it back to and through the caravan, and onto the back of the field… only for there to be a crash in the crosswinds, leading to a “gruppetto” finish. Not the best start to the season but I stayed upright and got some seriously good training chasing the caravan.

Next up was Trofej Porec. I spent the first lap and a half launching and following moves. After a brief hard bit with two laps to go, I was told to attack the chasing field, I did, only to be brought back within a few kilometers. This led to a series of counterattacks that saw Matej end up in a small group dangling off the front of the field for the remainder of the penultimate lap. At the end of the day, the race ended in field sprint and was good for getting racing in the legs. 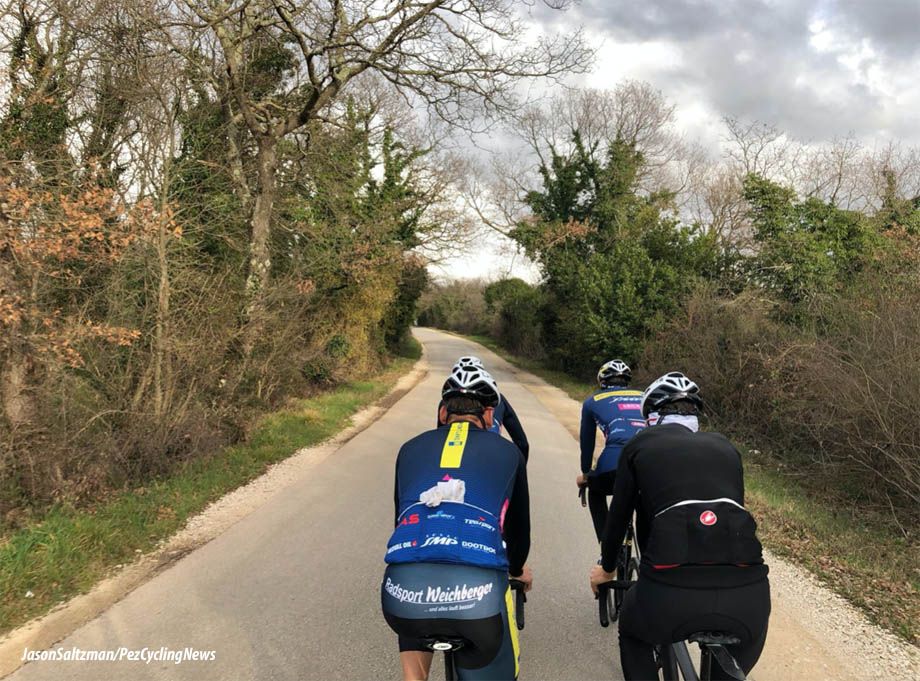 We now thought we had three days before starting the Istrian Spring Trophy (a prologue and three road stages with uphill finishes on stages 1 and 2). I backed up racing in Porec with one really good training ride with repeats on the stage 2 finish climb. I finally felt like I had some speed in my legs for the first time since arriving in February and was psyched for a race with some climbing.

This was of course until at 4pm on Wednesday afternoon the race was cancelled due to precautions being taken around COVID-19. We packed up and headed back to Austria. 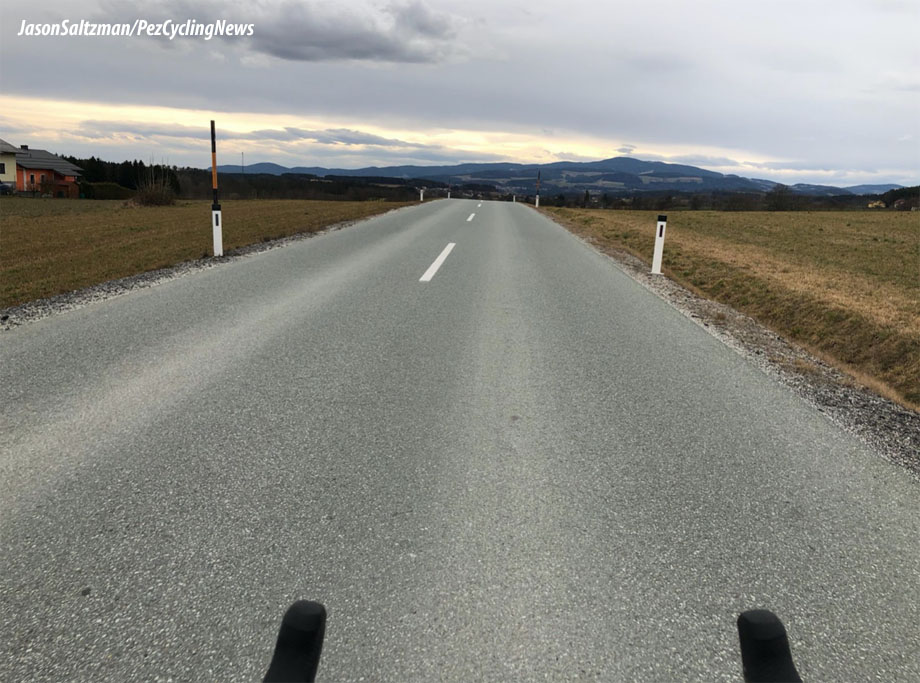 Heading for the climbs to the northwest of Pinkafeld, Austria

Now, sitting in my apartment, I, like almost everyone else, am in limbo. The reason I moved halfway across the world has disappeared for the foreseeable future. It’s not like I can stop training and go gallivanting around Europe either (which runs counter to controlling the virus and to trying to focus on being ready whenever races resume). The last day or two since racing has been postponed have seemed bleak. I am struggling with being holed up in a small Austrian town, not knowing anyone, with no idea as to when racing resumes (proverbially, no light at the end of the tunnel). I would love to come home but that feels so bad given everything I’ve done to get here. In the end it is really easy to get down and throw yourself a pity party. But this tragedy is not isolated to me, or to bike racing, or to sporting events. This is a world-wide, life-altering event that I am currently living through with my health intact in a beautiful part of the world. I guess what I am trying to say is that as the whole world is going underwater, I am trying to figure out how to grab a bathing suit as opposed to a bucket. 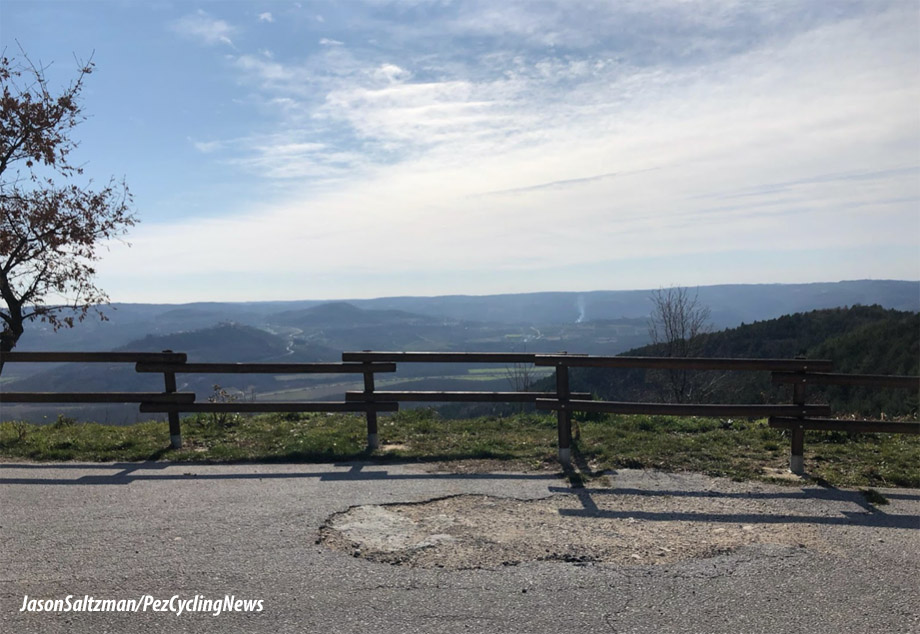 Atop the climb to during team camp in Croatia