“So, what are you doing in Austria?”

Rider Blog: After some ups and down for Jason Saltzman over the last five months in Austria, it’s time for a change, or to move on. In this case it’s back to California to see what comes up next… and get a burrito. Not the end for Jason, but the start of the next phase. 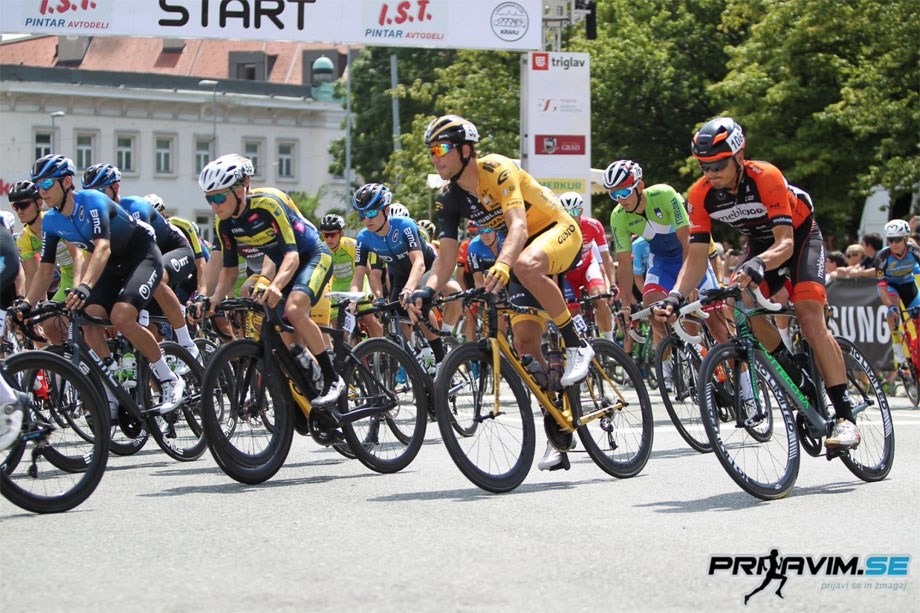 Through the start/finish area at GP Kranj

“So, what are you doing in Austria?”

After I stumbled through the three or four German phrases I’ve managed to grasp, this was the inevitable question roughly 20 seconds into the initial conversation I’ve had with everyone from the woman at the bakery to my teammates. Generally, there was some confusion surrounding the German heritage of my surname, which was only compounded by the fact that there is an Austrian rider by the name of Jodok Salzmann (even my director’s wife thought we were brothers). Most people seemed to expect some answer relating to academics or family. Over the course of six months, a global pandemic, and a whole host of unforeseen challenges, the answer always remained simple and the same… “I am here to race bikes”. I’ve talked about the onus behind this answer at length in my previous blog entries. As I am packing up my apartment, preparing to head back to California, I am also readying to answer this question one last time (in its past tense form) for the customs agent. 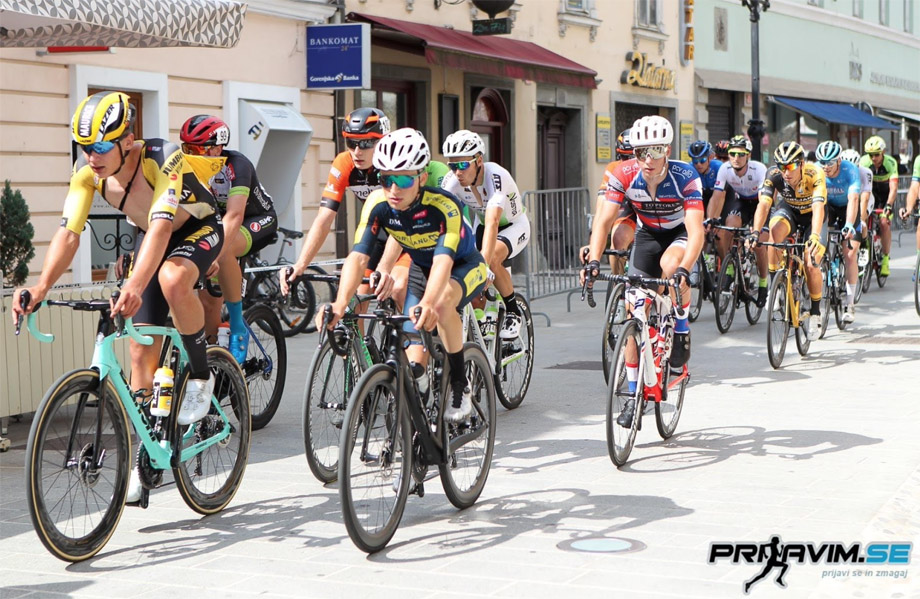 The answer will be the same, but the stories behind it are far from what I had imagined or hoped. In reality, I only raced alongside others, in a peloton, four times this year. Twice in Croatia before the world came screeching to a halt as if someone threw a frame pump through its front wheel. Twice after lockdown, one UCI circuit race in Slovenia and one points race style crit around an abandoned air force base. 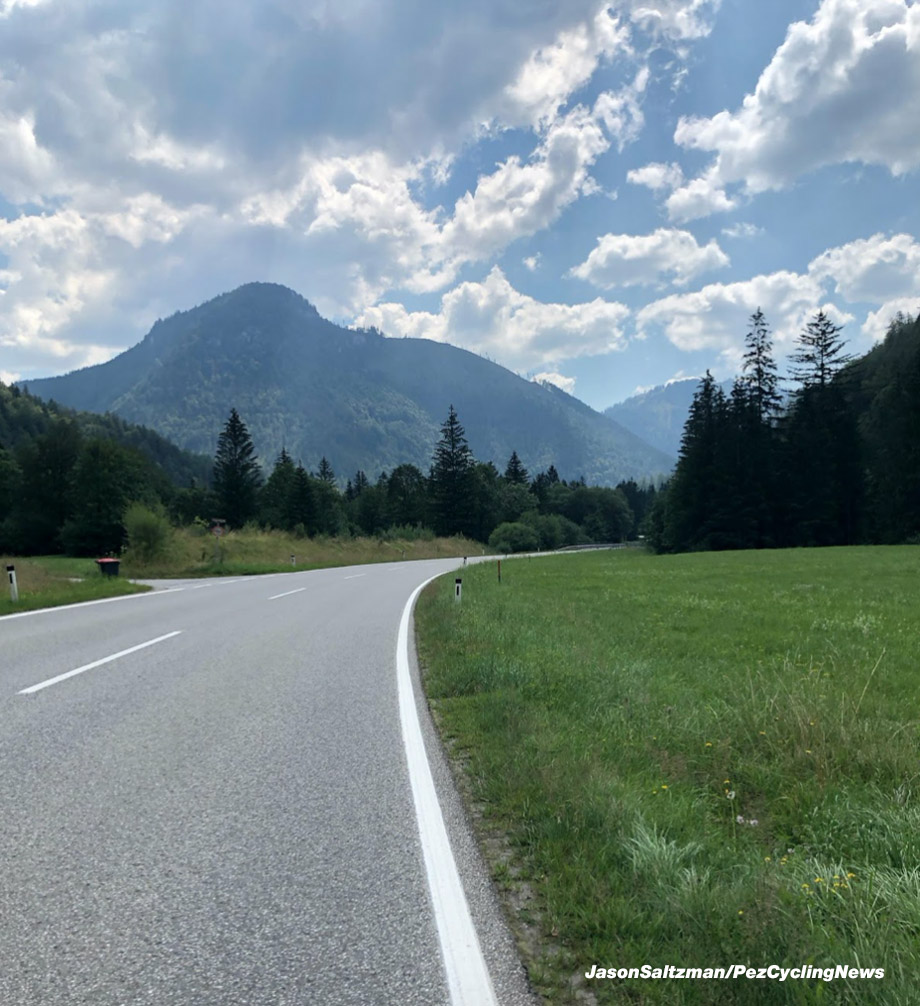 At the races before the lockdown I was finding my legs. Like most of the racers, I thought I was preparing for a long season of intense racing and opportunities. Five months of incredible focus, training, dedication, and promises of “If/when there is racing, we will go” later, I showed up to GP Kranj raring to go; ready to make the absolute most of every race. Any time you finish a race wishing it had been harder is a blessing and a curse. Nonetheless, I was proud of my effort on the day. Per my DS, I nailed the “suicide break” attempt to catch the sprinters’ teams out with half a lap to go. Five of us got away and had built a lead of ~20 seconds with 5km to go but it was a tough ask to stay away from multiple full lead-out trains and we were swallowed up ~ 2km from the line. At the air base crit, I again played my strengths given a flat course and points race format that didn’t play to my strengths and would make it hard to get a result for myself. Again, I was happy with the race I rode. I solo bridged a 25-30sec gap to a group of 6, making my team the only team with two riders in the group. We were out of sight and what I thought was out of mind, with every major team represented, but a few laps later the race was all back together. I tried multiple more attempts to grab points by sneaking off the front and multiple more efforts to position teammates for the sprints. In the end, the race yielded little in terms of results, but damn if it didn’t reaffirm my love for racing… even flat crits. 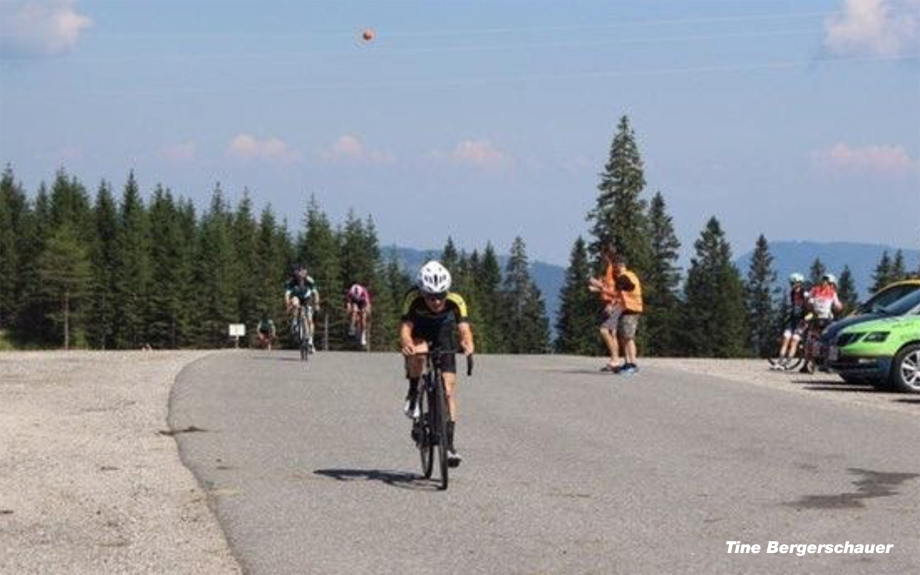 Finishing the Hochkar TT, what would be the last time I pinned a number on in Austria

Prior to the crit, we found out that the three days of UCI racing we were scheduled for in Hungary were cancelled due to the complications of COVID-19. I was particularly looking forward to these races as they featured selective parcours and historical results suggested that they would have suited my racing style. We were then told that there was little chance that we would have much more if any racing. In fact, there was a 36hr period in which the team said that we would have no racing after the crit. A few hours later I booked my flight home, and 12hrs later there was a potential 5-day stage race in Poland (which happened this past week and turned out to be a bunch of cyclocross races masquerading as road races). I used the 24hr airline grace period to rebook my flight for a week later, in order to be able to race in Poland, but as would become evident a few days later, the team was falling apart at the seams and would not be going. 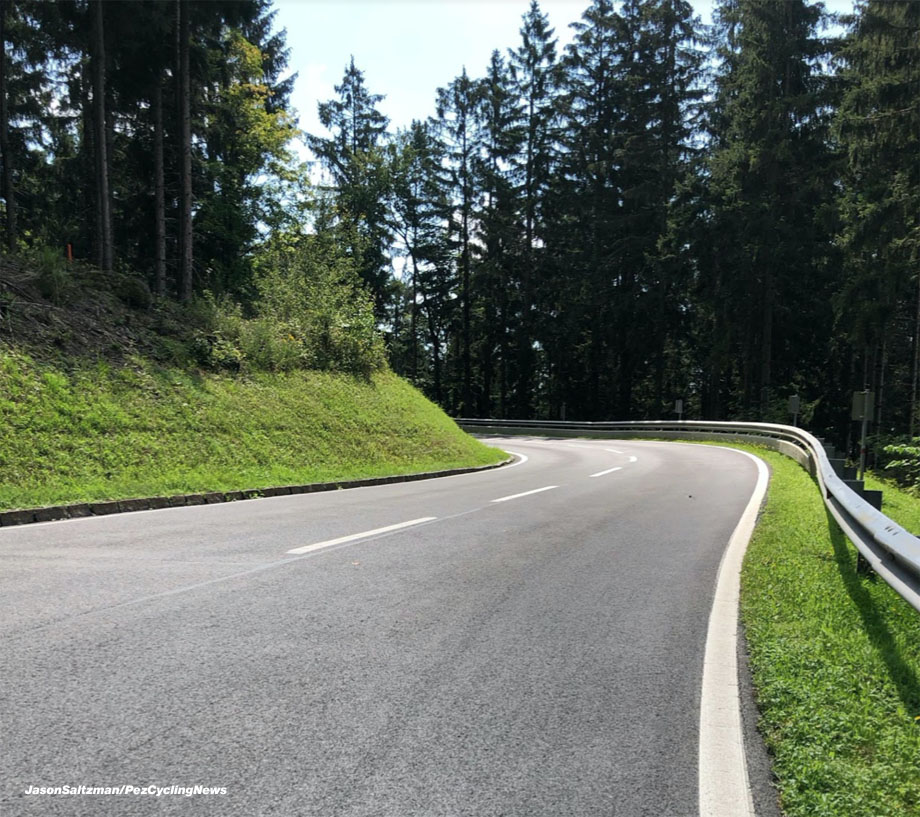 Smooth pavement, twisting roads, and vibrant shades of green… the quintessential ingredients of an Austrian ride

As is the case for many teams, the COVID-19 pandemic has wreaked havoc on sponsor deals and budgets. This, coupled with the fact that racing itself has gotten more expensive with the introduction of the necessary testing protocols and precautions makes for a tough situation for teams struggling with their finances. To make the long story short, the team has no money. No money means no races. And no races put me roughly right back where I was for the past 5 months; all dressed up with no place to go. At least now I am race fit. 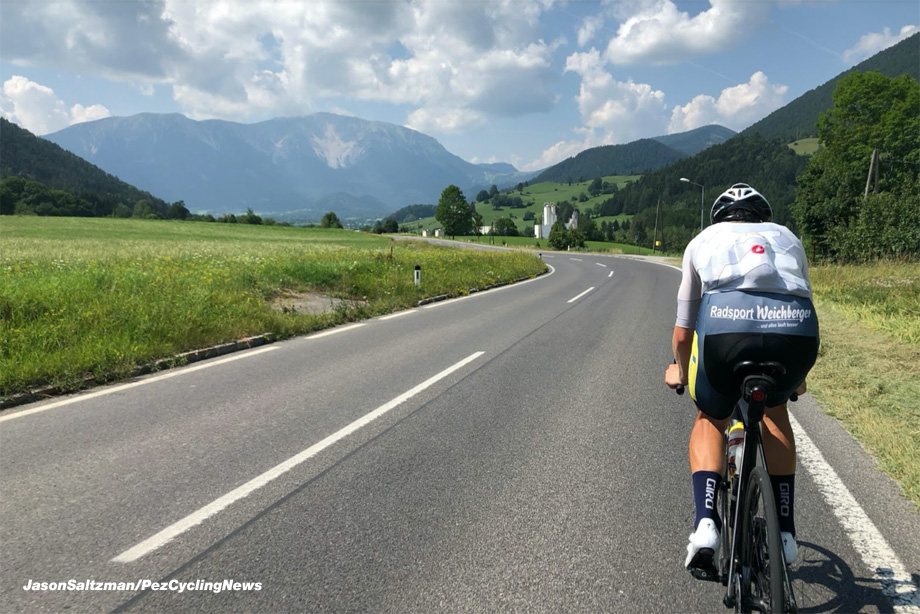 Following my teammate and tour guide, Stefan during one of our last rides together

In the week since the crit, I put this fitness to use, racking up almost 41hrs of riding covering 1150+ kilometers and just under 20,000 meters of climbing (and one truly biblical downpour) in what I am convinced is the most underrated cycling destination in the world. Even when people talk about the riding in Austria, nobody talks about the eastern part of the country. I can safely say that having ridden in most of Western Europe and North America, the 100km radius around Pinkafeld, Austria has the most variety of anywhere I have ever ridden. Any given road is comparable to many of the famous, epic, and haloed roads of more revered cycling destinations. This past week was an incredible opportunity to test the limits of my own endurance and to really enjoy and connect with the region I’ve lived in these past 6 months.

With two recovery days now before heading home, I continue to reflect on what this year/season ended up being and how I will answer the question “What were you doing in Austria?” going forward. In bullet point fashion and no particular order, these are the initial SparkNotes of my time here:

● I absolutely love riding and racing my bike! As for many people, the pandemic forced me to reevaluate my relationship with the sport. Bike riding is awesome, in fact I woke up every day wanting nothing more than to ride my bike. Hard or easy, fast or slow, there is something magical about riding a bike. Bike racing is awesome too, and the phrase “At least its racing” that got thrown around a few times really highlighted my own love for the unique experience that racing brings.

● Austria is an incredible riding destination. This one is covered above but needs to be included in this list.

● The landscape of professional cycling, especially at the lower levels, is going to be very different in 2021. The dinner table conversations after the crit were all very somber as everyone asked the same question “What are your plans for next year?” Nobody could answer this question. Most of us muttered some response along the lines of “I’m not ready or willing for this to be how my career ends”. Already, a few of the teams I’ve reached out to have responded saying they won’t exist, are downsizing, or don’t know their status for 2021.

● It is very hard to integrate into a foreign culture when you’re locked in your apartment and confined to the couch for the majority of the time.

Despite the opportunities being far from what I had expected or hoped for this year, the decision making at each checkpoint was sound. As disappointing as the outcome (no real racing or the opportunities that come with it) was, I did the most with the information and situations that I was given. Despite the fact that my answer to the question “why you are you in Austria?” remained the same “I’m here to race my bike” for the entire 6 months, that never materialized into real racing. My time in Austria was defined by a desire to be ready to race and to race so the false promise of racing opportunities casts a shadow over the experience. This same desire for racing is as strong as ever, if not more so. And, I am struggling now through the same hustle to make opportunities for 2021 that I did last year for this 2020 season. Any suggestions or connections are more than welcome. 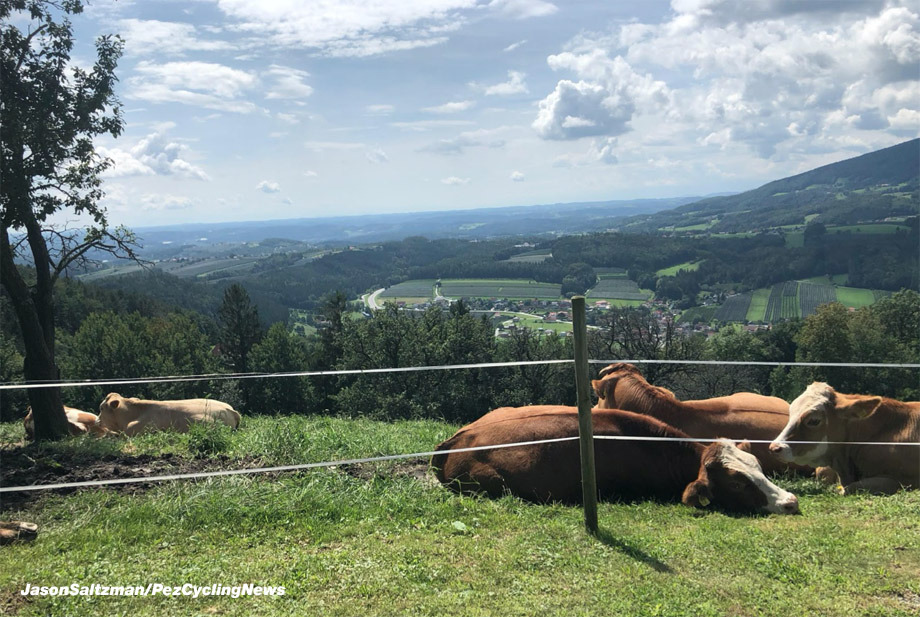 Time to finish packing, hop on a plane, and get the burrito I’ve been craving for at least 5 months. Because, despite how incredible Austria is, I’ve yet to find good Mexican food this side of the Atlantic.

How Many Sprints are There in a Field Sprint?