Hi again, folks. I’ll bet that a lot of you thought I’d dropped off the face of the earth (I’m sure that some of you didn’t even notice or care), but I’m back after doing more than my fair share of bike racing. After my nearly two month trip that started with Grand Prix Cycliste de Beauce in Quebec, went to Fitchburg, and the Cascade Classic, I found myself once again in Canada racing the “Canadian Superweek” for about the last ten days in British Columbia. 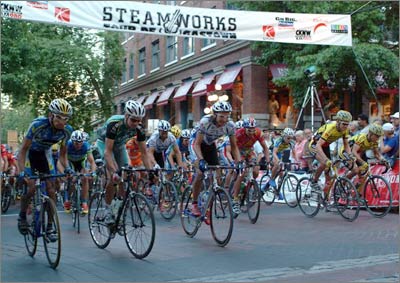 I’ve got to raise a Kokanee to my Canadian compatriots and let you know that when it comes to putting on a bike race, you put the U.S. to shame. I have raced three times in Canada now and every one of them has been well organized with tons of spectators and European-like fans. One of the biggest wins of the year for us came last Wednesday at the Gastown Grandprix in Vancouver, a 60K criterium that has been won by guys like Lance Armstrong, Alex Steida, Norm Alvis, and Jonas Carney. 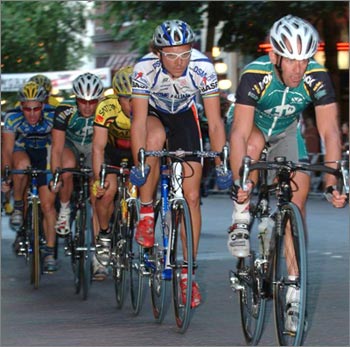 Mike Sayers made sure the Health Net boys were well represented at the front. Pic:KenCheung

The race is on a course shaped like a slice of pizza, with cobbles on about half of the course and a nice little 160 degree turn at the top, which made for some interesting crashes and a pretty hard sprint back up to speed. I saw Prime Alliance rider Ryan Miller lose his shoe as it continued to ride, attached to his bike, down the road while he sat in the corner. The 28,000 estimated spectators kept the incentive high and made for 60Km/h speeds to the corners on either side of the course before you had to break and fight to stay on. 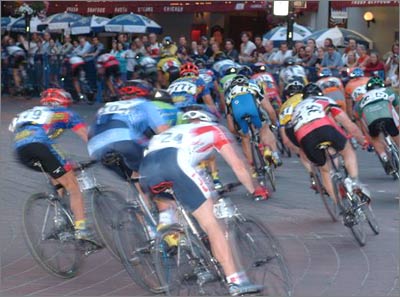 Gastown is the historic center of Vancouver, dating to the late 1800’s. Pic:KenCheung

It made for some tactical racing that had my Health Net team scrambling to cover, with guys taking flyers off the front all night. The most dangerous moves came late in the race, when, with two laps to go, Svein Tuft of Prime Alliance took a charge off the front that was brought back by Mike Sayers with one to go. Danny Pate was the first guy through the final corner in an attempt to leadout Alex Candelario, but in the final straightaway it was my teammate Gord Fraser taking the sprint ahead of Alex and Jeff Hopkins. 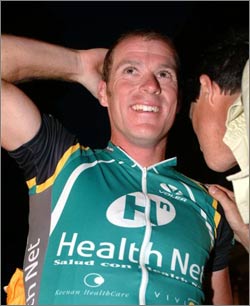 It is not often that Gord gets super excited about winning a race, but this one was big for him. It was a race that had always eluded him and one that he said he wanted to win before he retired. The fans in Gastown were great with everyone wanting a picture with Gord and one guy even recognizing and congratulating him the next morning as we pulled up to a stoplight in my car. I can’t wait until next year.

The locally famous Superweek continued with the road race in White Rock, featuring their own version of “The Wall”. How’s that wall, Rus?